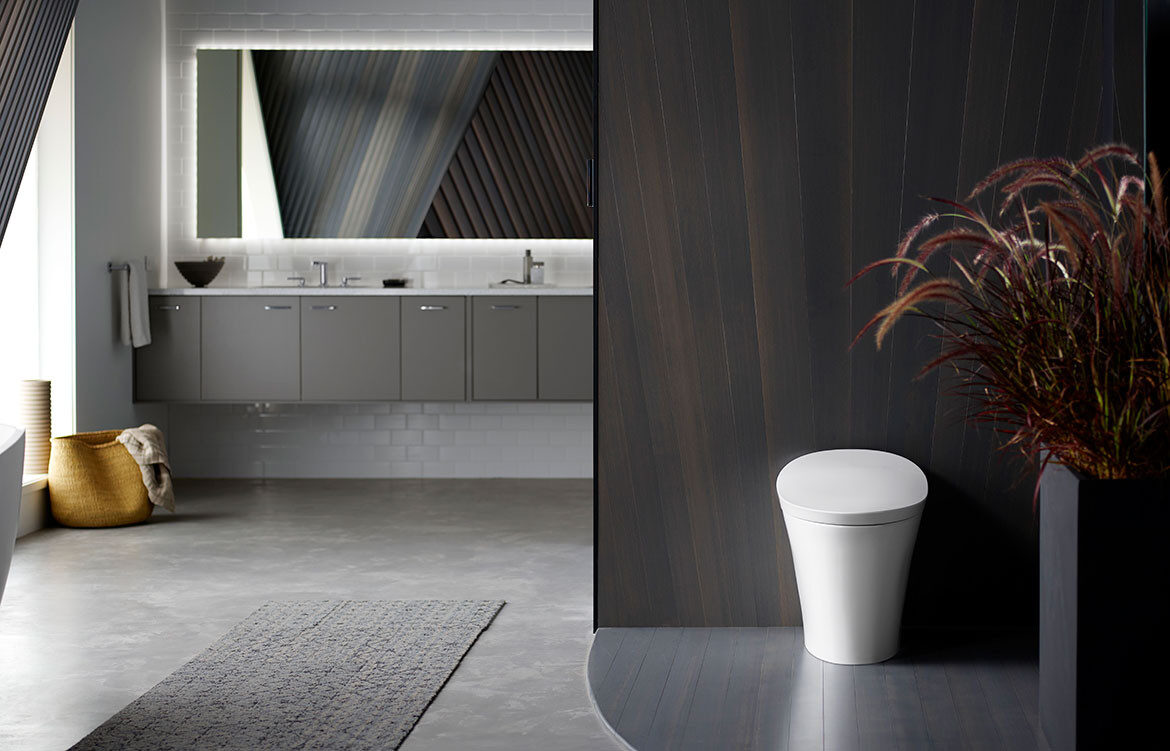 Today’s smart bathrooms run the gamut from biophilic sanctuary to sleek, tech-enabled retreat. The latest gadgets and products feature high on clients’ wish lists and for designers and architects, it’s that one room in the house where they can go a little crazy. This is often the space where those much-loved vintage tiles that don’t fit anywhere else find themselves or where an odd light fitting works best. It’s also possible to have fun with custom finishes, details and fittings, in order to make a statement.

This is very much the case with the bathrooms in SJB’s new Clarion mixed-use development, which includes 18 apartments, in Sydney’s Alexandria. The architects used a heavily patterned grey, green and white marble for the vanity, which they also installed as island benches in the kitchen. While it lends each apartment’s interior a sense of cohesion, it makes these two rooms especially hard to overlook. In the bathroom, the marble ties in well with the terrazzo floors, timber window reveals and greenery, producing an incredibly appealing biophilic expression. Elements of nature are also the inspiration behind Kohler’s latest collection of artist edition basins. 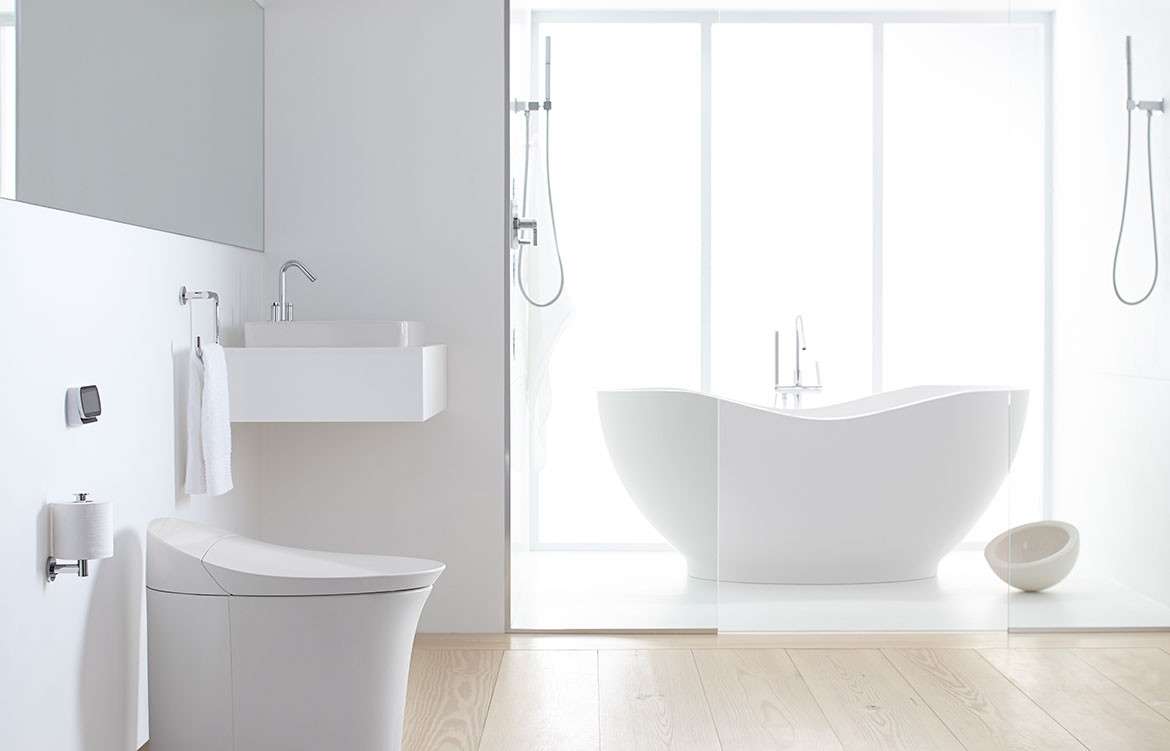 The four models are a collaboration between the bathroom products manufacturer and US-based artist Ashley Woodson Bailey, who was inspired by 17th-century Dutch masters. They add a bold yet contained decorative flourish, generating even more curiosity because of the processes behind their making, which begin with a 3D arrangement that’s developed into a sketch and then hand-applied before firing.

Yet not all surfaces have to be dramatic to be noticed, certainly the beauty in Caesarstone’s new Metropolitan Collection is its ability to provide an elegant backdrop for custom features or heavily detailed fixtures. The technology behind the concrete-inspired finishes means its non-porous surface is high-performing and works well poolside, in bathrooms and other wet areas. 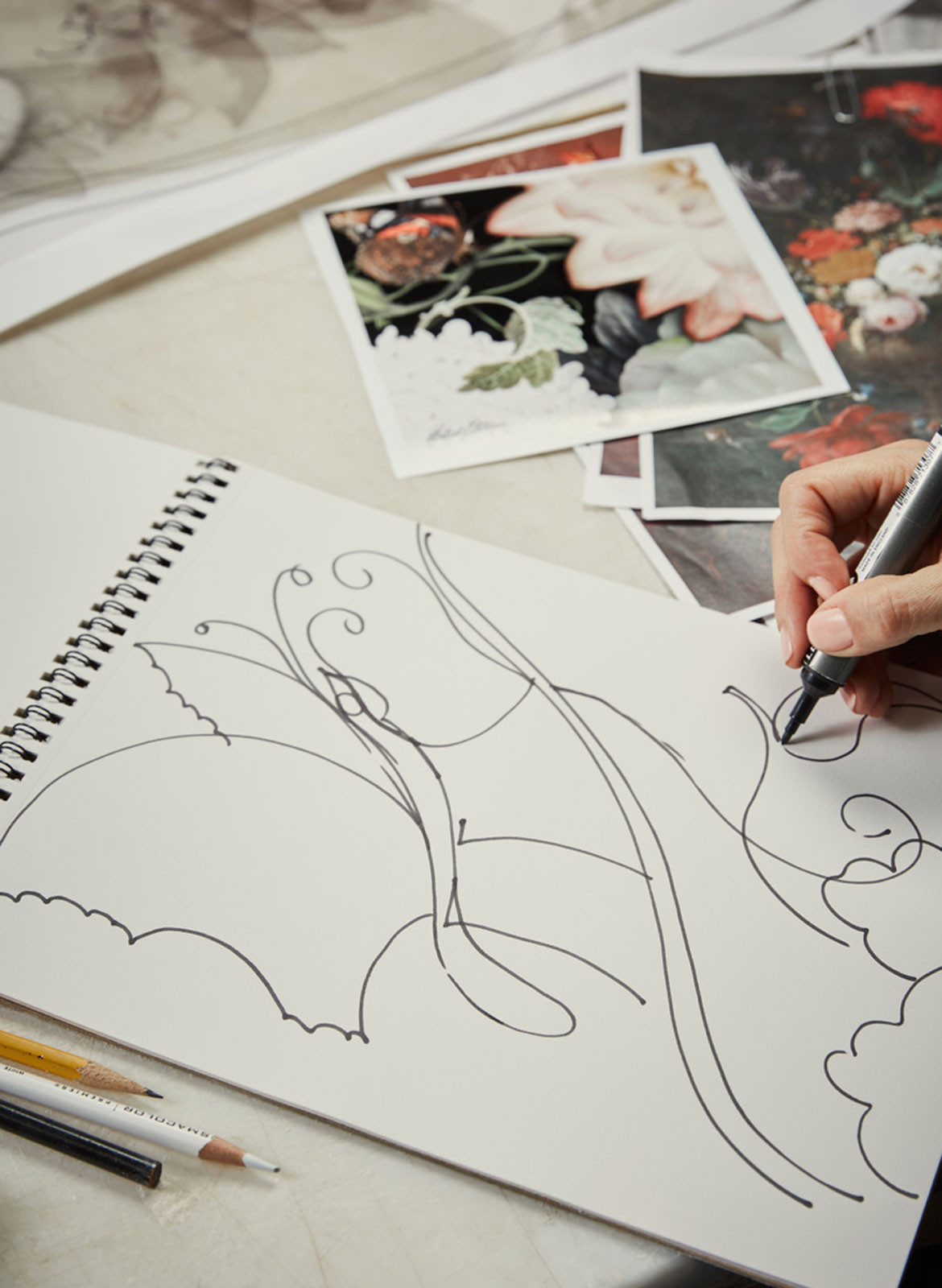 Functionality considerations are paramount in the smallest room in the house and these days, there’s seemingly no product that hasn’t been tech-enabled in order to make life just that bit easier. From glass that shifts between transparent and opaque and underfloor heating to voice-activated appliances and fixtures made all the more accessible with the rise in popularity of Google Home and Amazon’s Alexa. For internal bathrooms with no windows, there’s even a lighting system that reproduces the effect of natural sunlight. Produced by Italian company CoeLux, the product of the same name incorporates LED technology that reproduces sunlight’s spectrum and brightness.

Axor’s new PowderRain showerhead supports the bathroom as sanctuary trend with an offering developed in the Hansgrohe sound laboratory that’s splash-free and quiet. The jet emits thousands of micro-fine droplets and is also environmentally friendly because it reduces water consumption. Any bathroom manufacturer would be remiss to not engineer products with water-saving technologies and this area of research and development is where many excel. Such water-saving features aren’t usually the first thing to be highlighted in the catalogue, which is interesting. But this could simply be a positive sign of the times in which sustainable practice is now commonplace (as it should be). 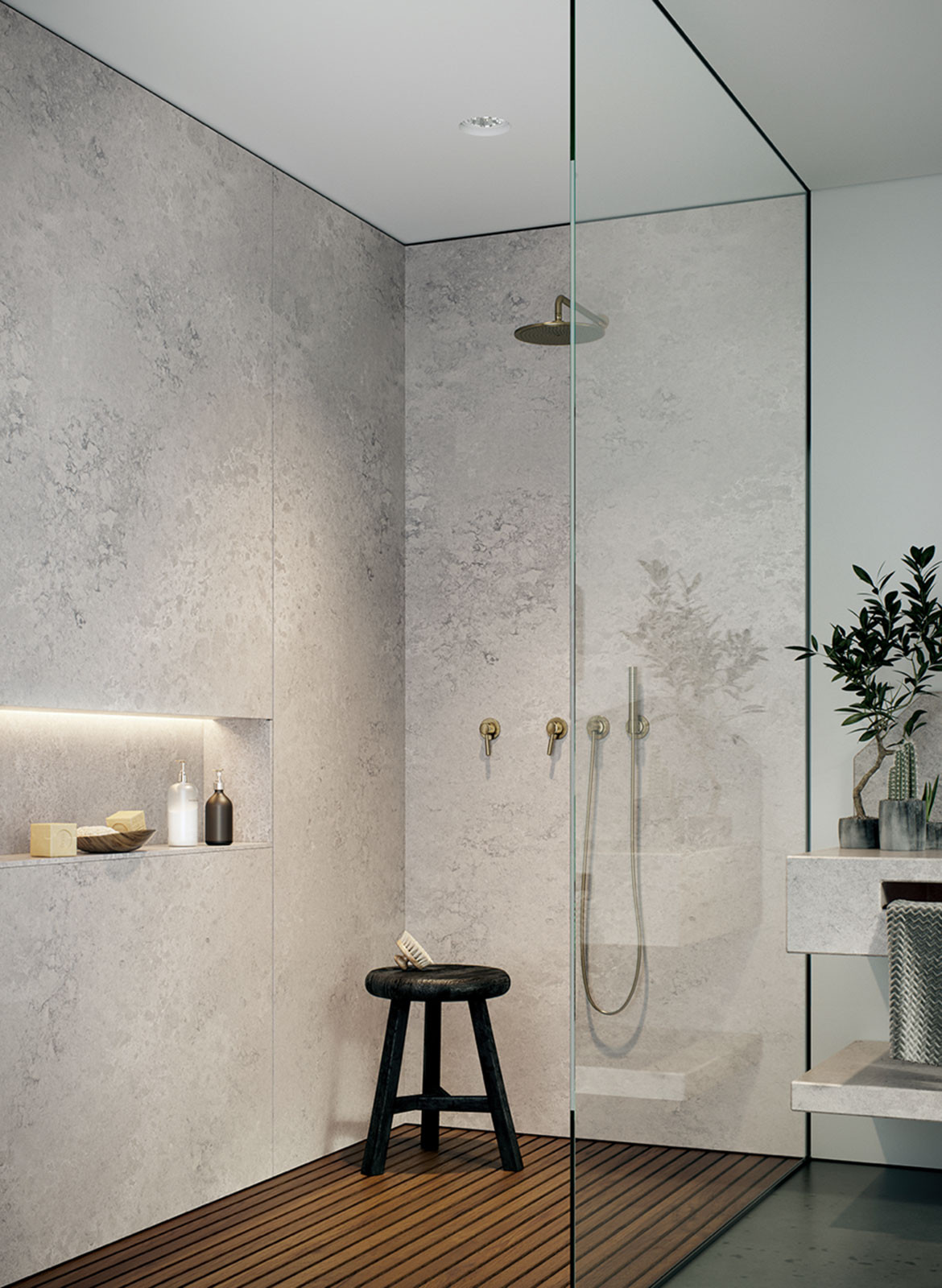 In regards to questions of hygiene, the toilet is something that has to be discussed and with so many new ranges available, the task of selection isn’t as straightforward as it used to be. Veil by Kohler is about as high-tech as a toilet can get and its built-in UV cleaning bidet, touchless flushing and one-touch remote control make it incredibly appealing as a low-maintenance, high-performance fixture. There’s something to be said for a bathroom that looks good and functions efficiently because of the sense of comfort it elicits and at the end of the day, that’s really what it’s all about. 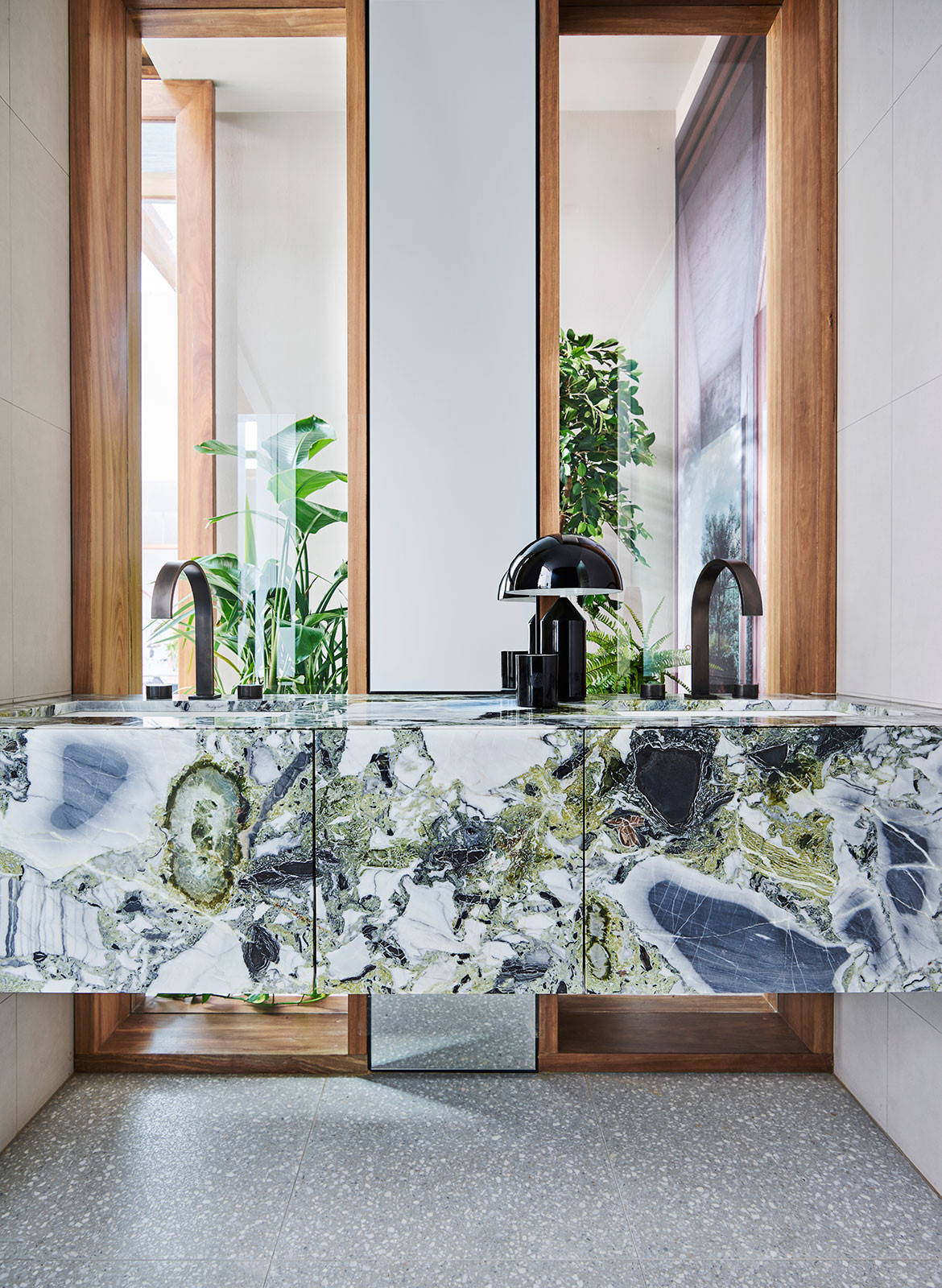 SJB Clarion Bathroom. Photography by Anson Smart.[/caption] We think you might also like Bathroom Designs That Bring The Outside Inabc 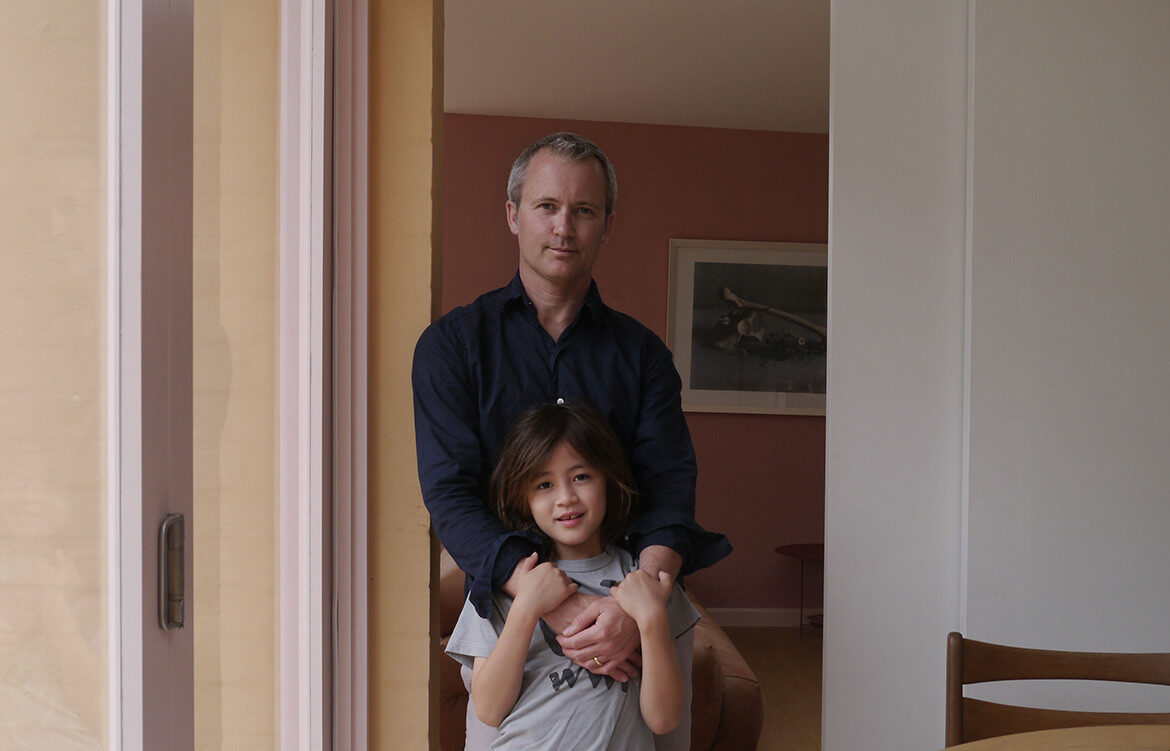 Not Your Standard Business Plan, But Leif Made It Work

Skin and hair care that champions botanical extracts and essential oils native to the Australian outback, Leif Products has been an advocate for local design since day dot. The company originates – interestingly – from a design studio called Container Made. The two co-founders, Jonnie Vigar and Brenan Liston came from backgrounds in design and brand management respectively when they joined forces, along with designer Mark Evans, to form this design studio that worked largely in the space of beauty and skincare. It wasn’t long ago when they decided to embark on this new challenge: to fill the containers themselves. Leif has since united a dedicated following of consumers who value design, gentle and natural ingredients, and cruelty free practises. After working with the team at Leif on the recent Kitchen and Bathroom panel at Poliform, Sydney, Habitus caught up with Jonnie to get a deeper understanding of the company’s roots, and hear about its next exciting venture. 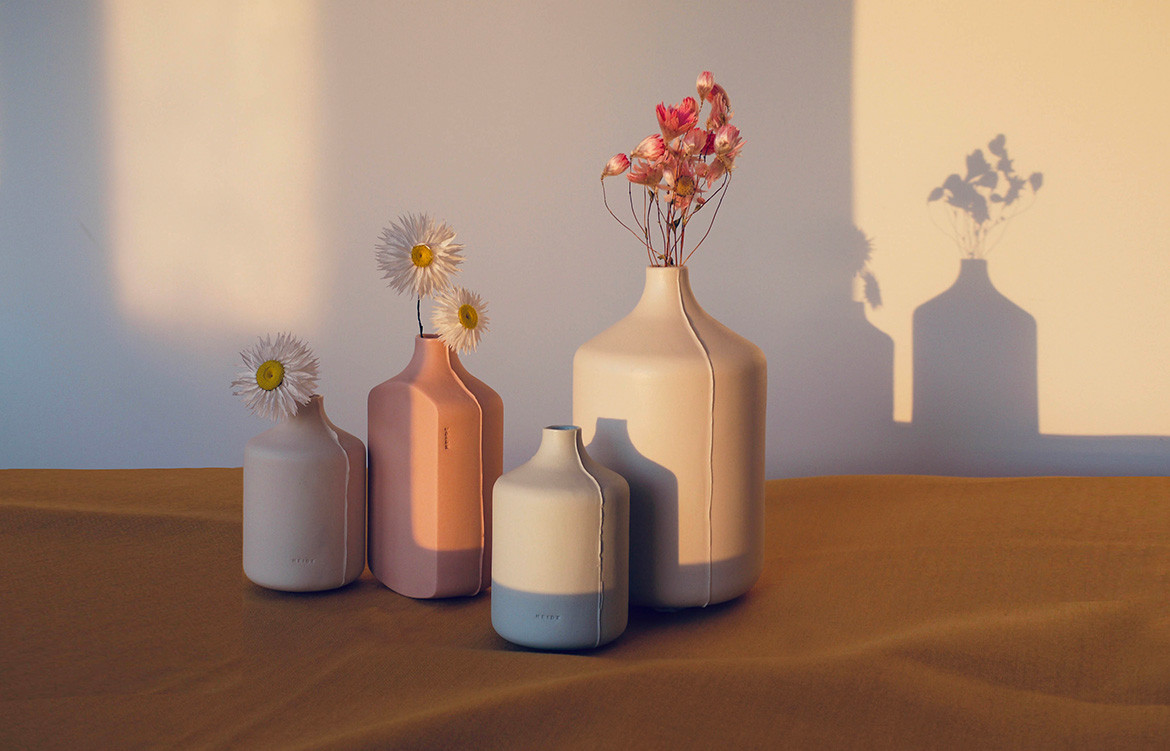 Can you tell me about the history of Leif; how did the company came into being? Leif was born from our design studio Container Made, having created cosmetic packaging for other beauty brands Leif began as a form study without a client. A model of a narrow necked bottle sat in the studio for several years and visitors were so often drawn to it. The process seems back to front but packaging is so important to how products, especially beauty products, are perceived it helped us think about what it could become. We feel there is a gap in the market for a modern product range that really hero’s Australian botanicals. It has been a steep learning curve but really rewarding to see how people engage with fully formed Leif. What are your design roots as an individual and how do they serve Leif as a brand? My background was in magazine design. Shortly after arriving from the UK I was asked to design a logo by hair stylist Kevin Murphy who was in the early stages of developing his own range of products. That same week I was introduced to Brenan Liston (my business partner) who’d just returned from NYC as a Design Director for Estée Lauder. It was a moment of synchronicity and we worked together to deliver not just the brand identity but also the unique package forms that have become well known. We enjoyed the experience and opened our design studio with Mark Evans who joined as designer and quickly became the secret in our soup. Over the years we’ve worked across many projects and Leif benefits from this experience. Our desks sit together which means ideas can develop quickly; we all bring different skills but share the same thinking on design. After 18 years we still enjoy the process and friendship. Tell us about the Leif x Heide Museum of Modern Art collaboration: We’ve collaborated with the Heide Museum of Modern Art on creating a limited ceramic range inspired by the Leif bottle forms. The porcelain vessels have been crafted through the mix of modern and ancient techniques. The collection consists of three vases in four muted tones available exclusively through the Heide store. Each vessel was initially produced in PLA (a plant derived thermoplastic) using our studio’s 3D printer and brought to life in porcelain through slip-casting thanks to the hands of Sydney based ceramicist Deb Taylor. 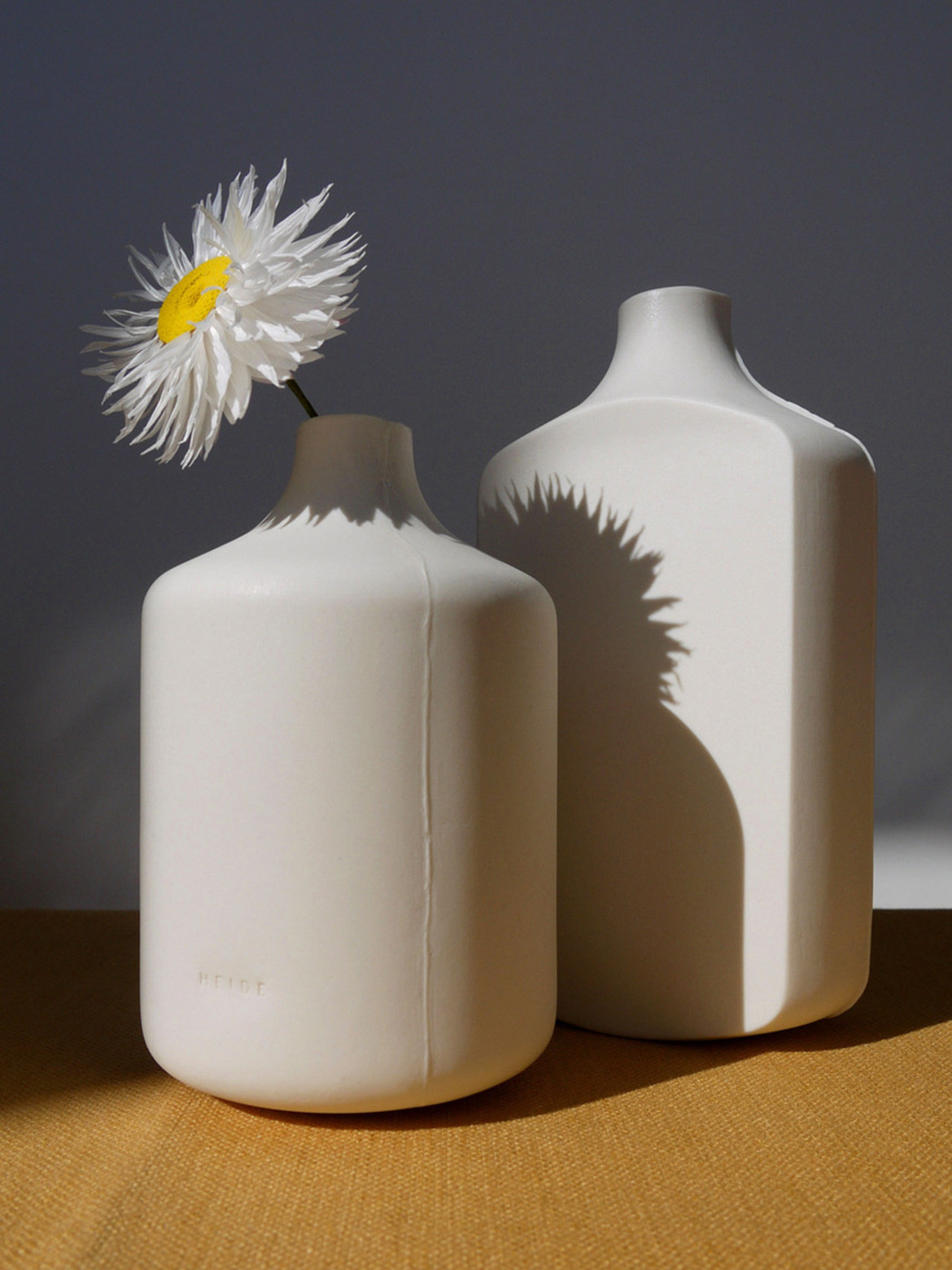 How did the collaboration come about? The connection initially came as a request from Heide asking if we’d contribute product for use in the bathrooms throughout the property, which we were very happy to do. We wanted to announce our amenities partnership with Heide with something meaningful that reflects Leif’s connection to design. Heide’s latest exhibit, An Idea Needing to Be Made, Contemporary Ceramics seemed perfect because the exhibit explores the idea of function, display and purpose of a vessel. Tell us about this exhibition and what was so enticing The exhibition is a focus on Australian contemporary ceramicist artists, with a foreground on Gwyn Hanssen Pigott and her reinterpretation of the vessel. There is a synergy between this exploration and Leif, as our bottle shape is one of our unique offerings.  The exhibit is a shared appreciation for functional form and good design, and explores the concept of an everyday vessel being no less beautiful than an abstract object – just like the Leif bottle. How does it align to the Leif mission? We recently visited the museum and learnt how key Heide was in nurturing and promoting the modern art movement within Australia. The story of John & Sunday Reed and the artists that they, quite literally, took to heart is equal parts romance and tragedy. As we embark on our partnership with Heide, we hope to come up with unusual and creative ways to work together. This capsule collection represents our shared passion for beauty in functionality, and making good design accessible and tangible in daily lives. It’s also an all-Australian line-up and supports small and local makers – qualities that definitely represent the Leif brand. 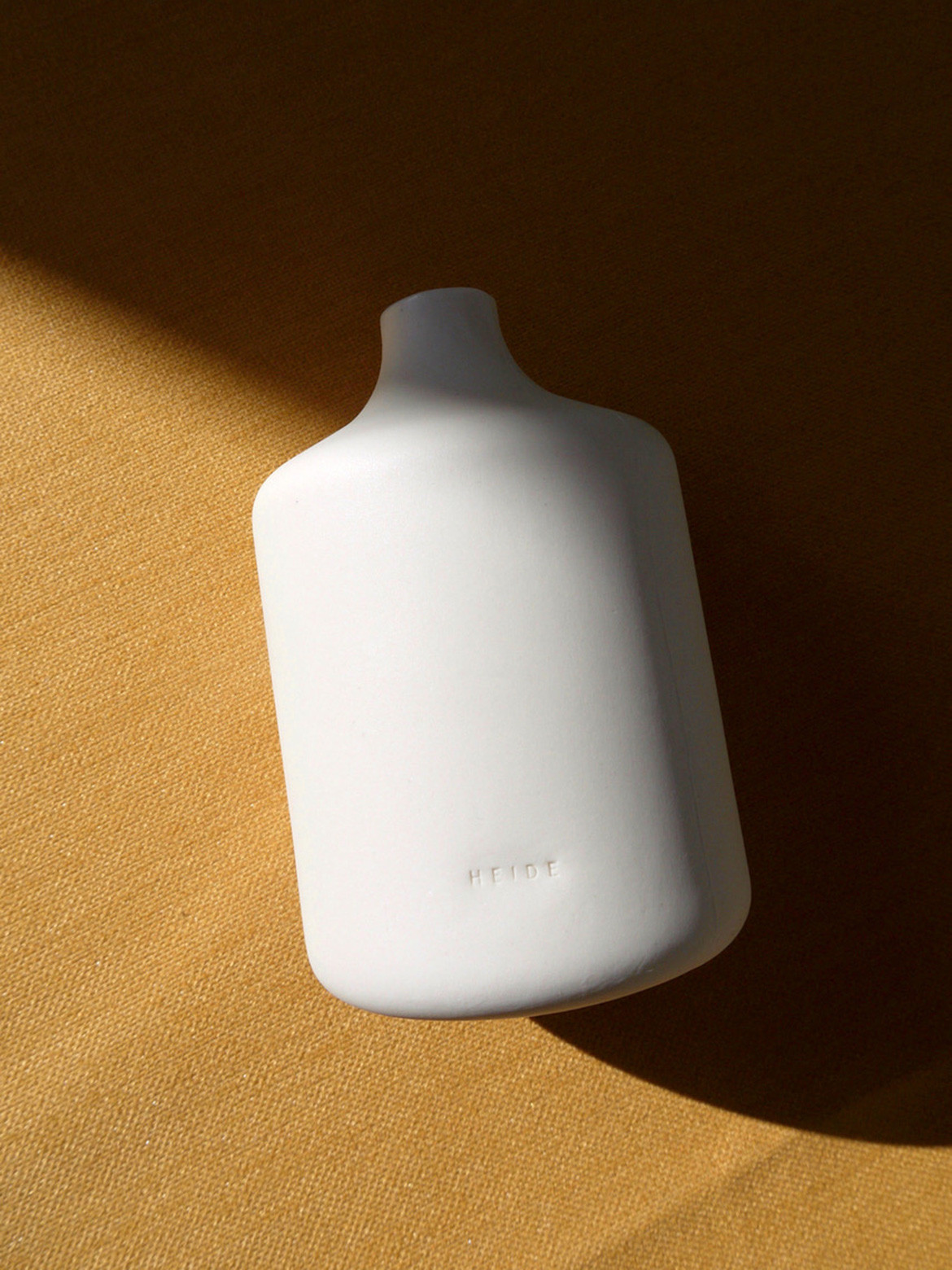 Tell us about the connection to ceramics? Containers have been with us since the birth of civilisation and ceramics have played an important role throughout history. Anyone that has dabbled in a pottery class knows it is a therapeutic ‘slow’ craft, one that brings a sense of calm. This is how we hope people use our products, and that the aromatherapeutic properties of our formulas bring a peaceful moment to people’s busy lives. I’m currently surrounded by ceramics at work and home. My wife recently took to hand building and the wheel so our house has an ever growing collection... the shed has been taken over and its been great seeing Val’s creativity extend beyond fashion! What do you hope Leif can offer to the design community? We hope to continue to partner with organisations and people in the Australian design field in unexpected ways. Australia has ancient and modern beauty, and we want to communicate this. Are there any sustainability elements to your brand? All our products are plant-based – we are 100 per cent vegan and cruelty free. Our formulas are biodegradable and made in Australia. We aim to use minimal packaging and our bottles are recyclable. We’re currently exploring ways to incorporate recycled materials into our packaging. Leif Products leifproducts.com 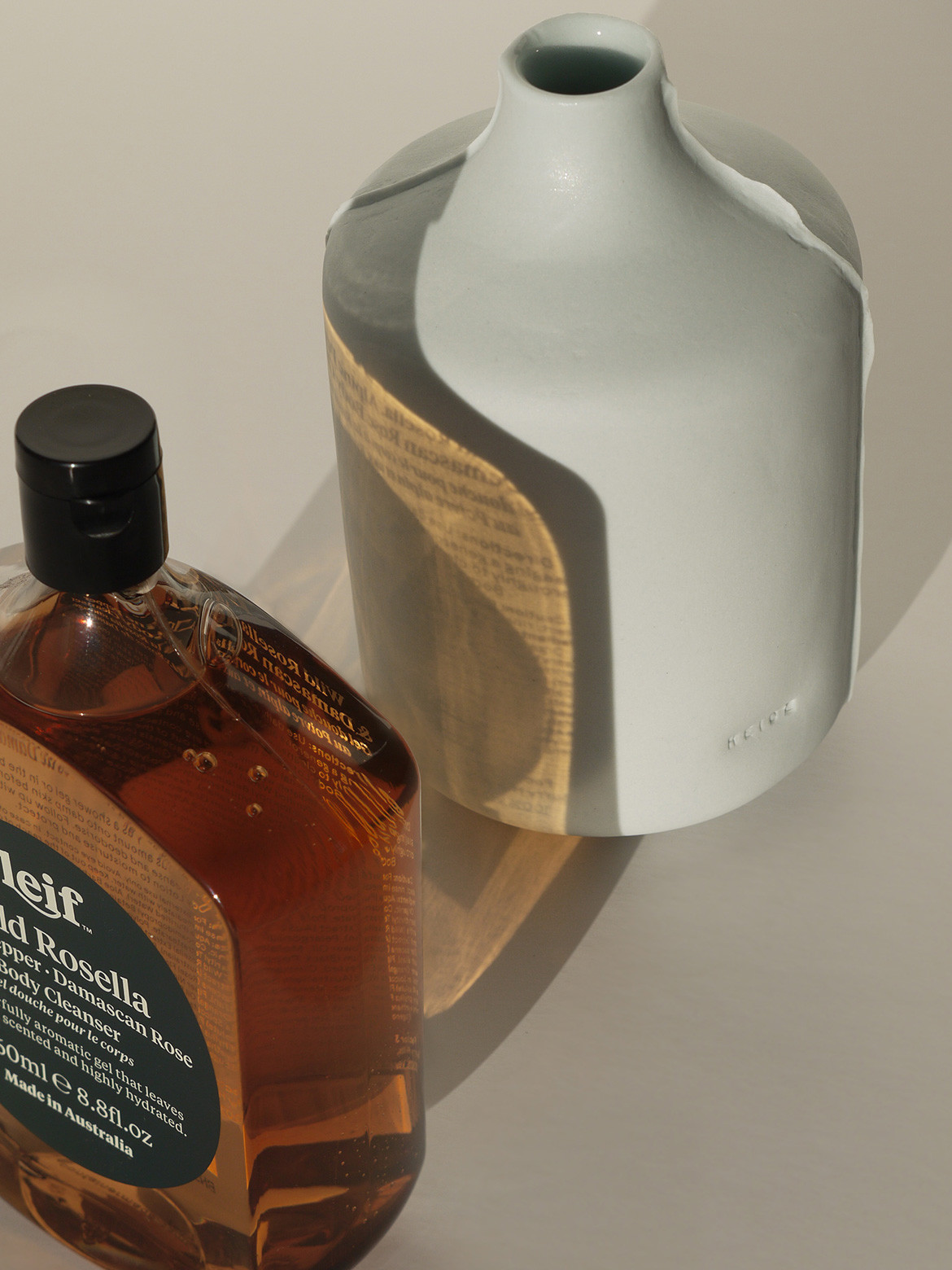 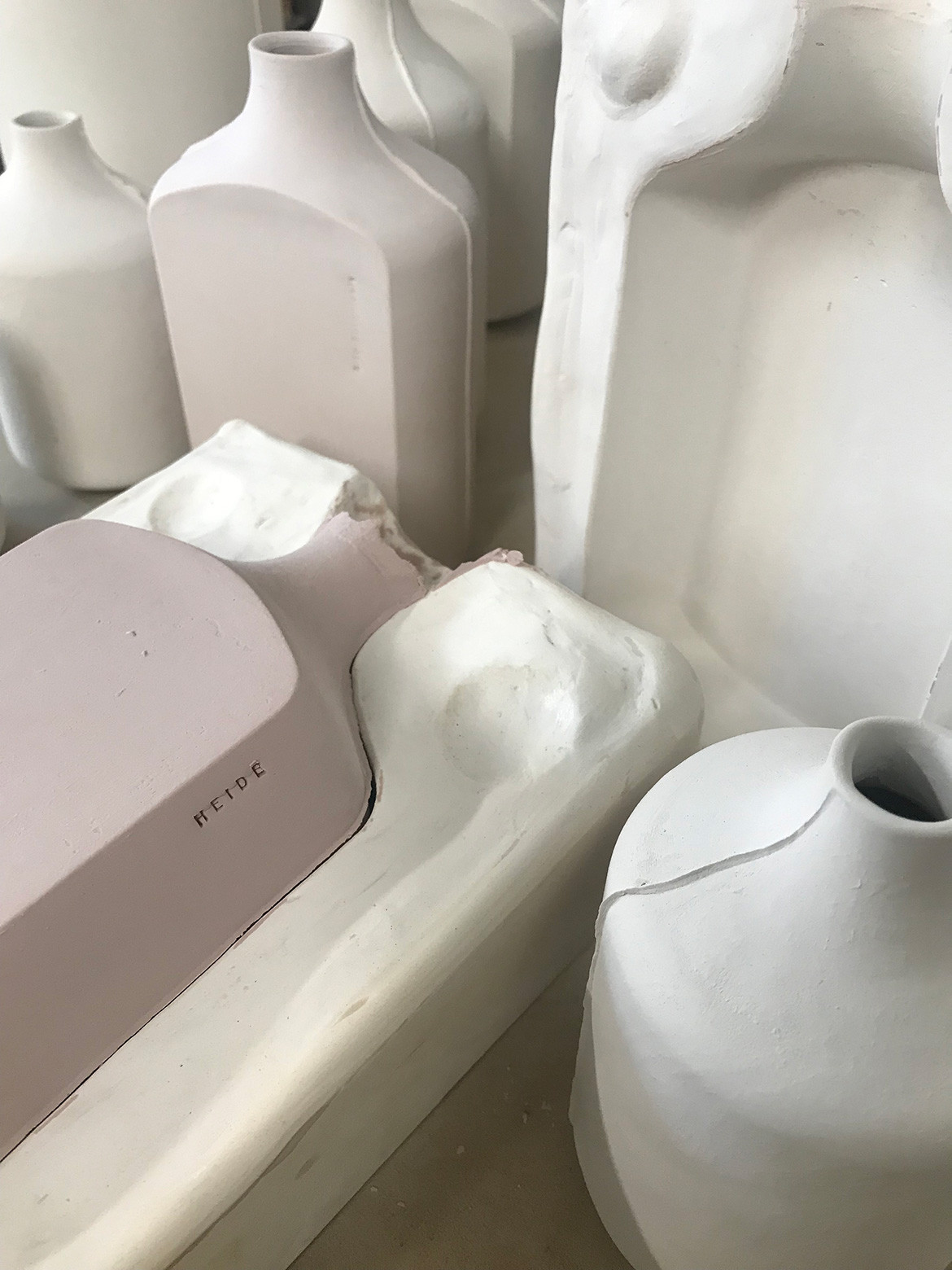 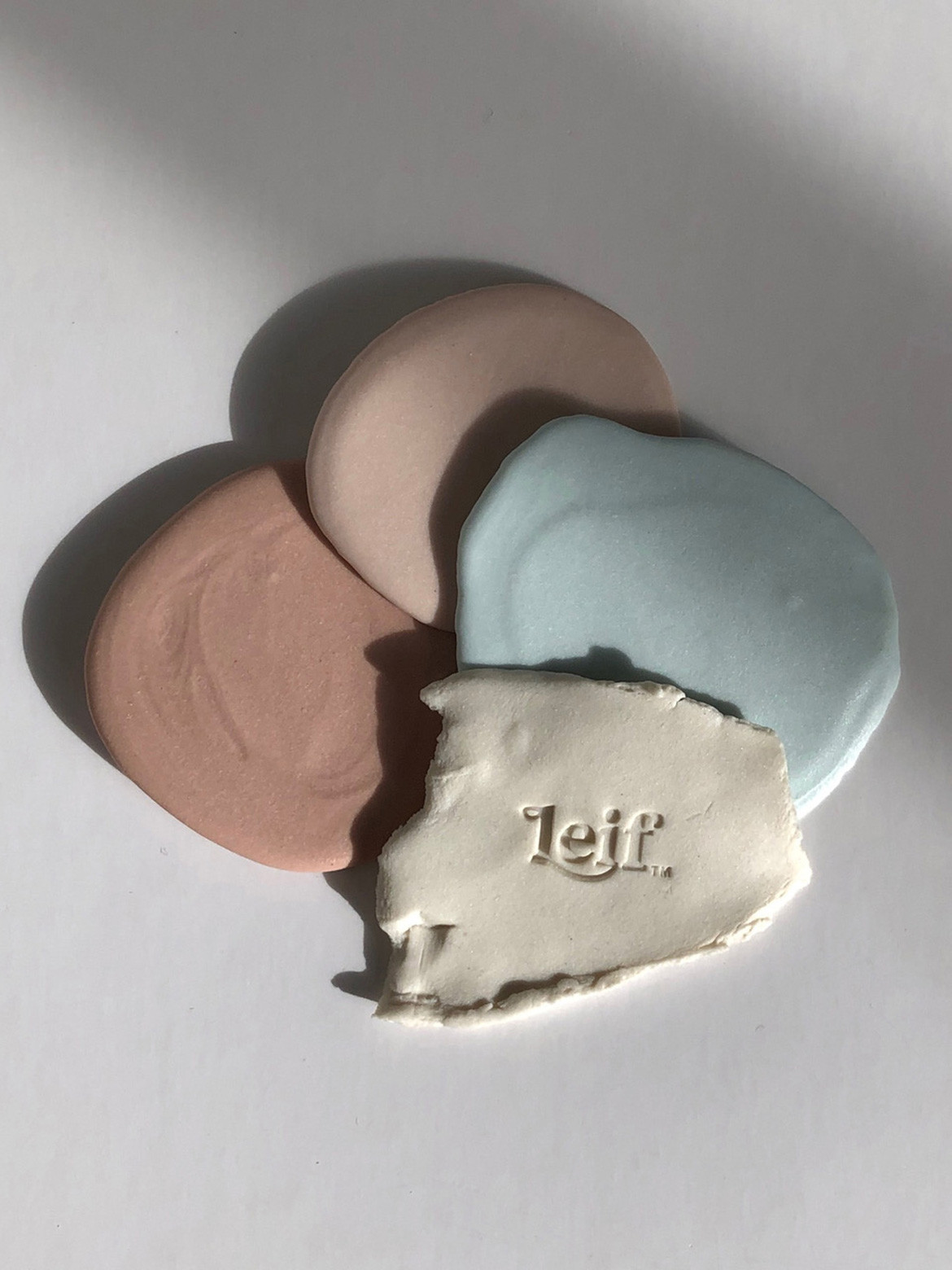 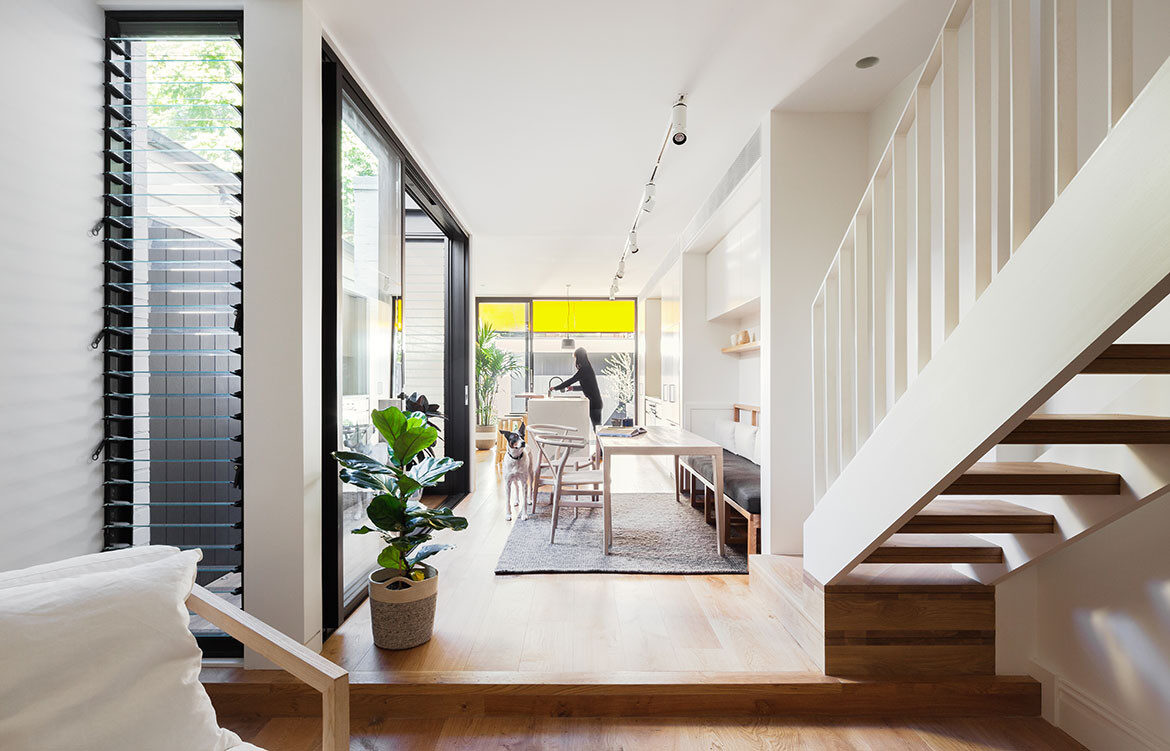 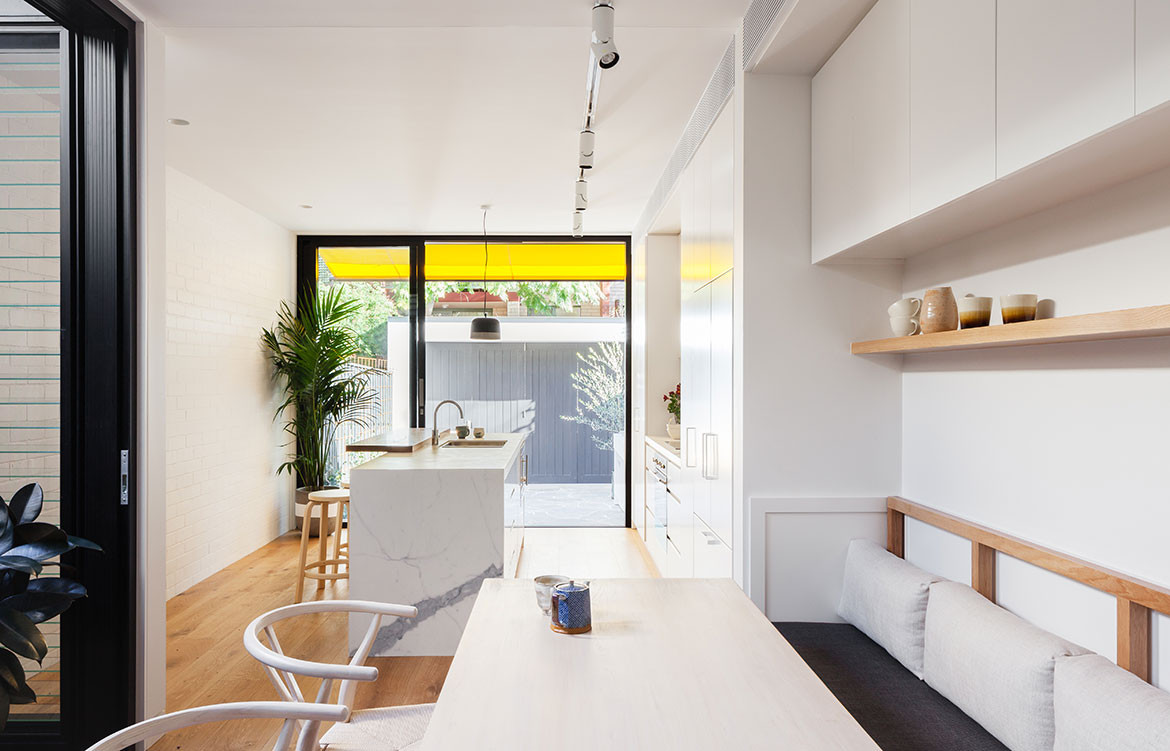 The architects also used a steel frame for the back renovation, to maximise every space on the site. “Having the kitchen and dining area integrated down one side, and pushing the dining table into the wall, allowed extra space,” says Michael.

The back of the house, starting from the new staircase, is like stepping into a brand-new space.

The house is a blend of old and new, the front of the house was restored in the class Victorian terrace style, they kept the heritage façade and re-trimmed the skirting, doors and fireplace. However, the back of the house, starting from the new staircase, is like stepping into a brand-new space. To prevent the house from looking too sterile, Michael wanted to adopt a Scandinavian design aesthetic, with clean lines that flow from one spot to the next. 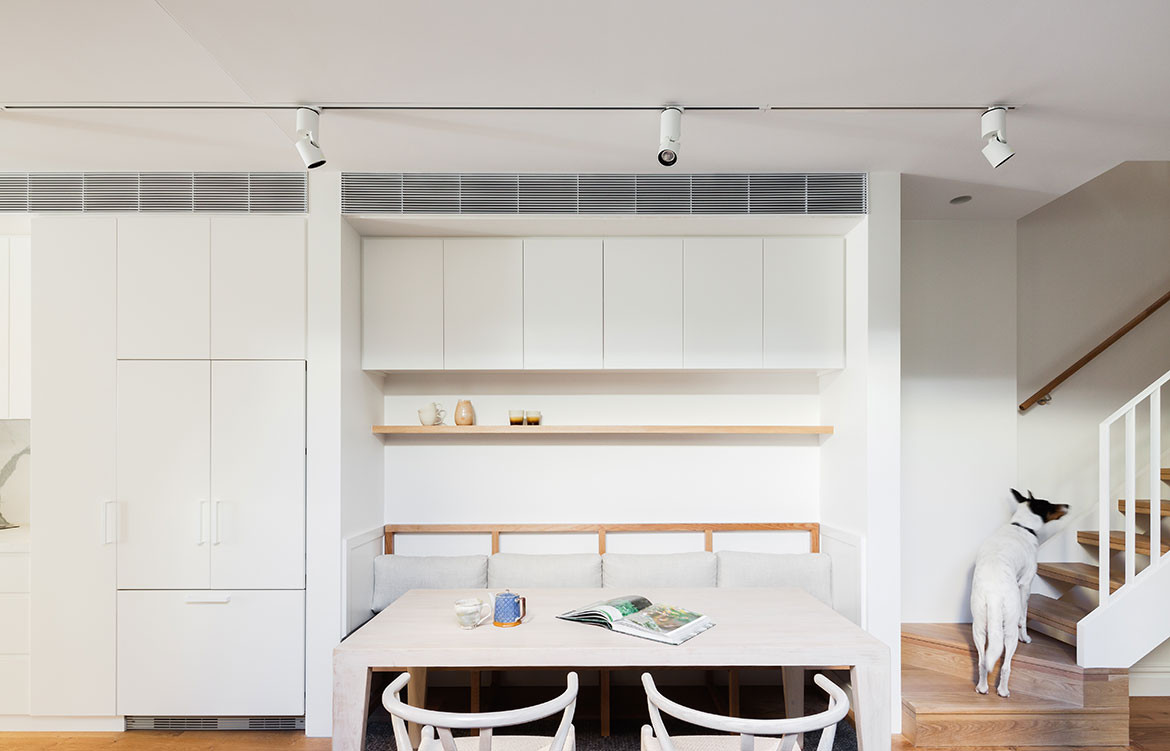 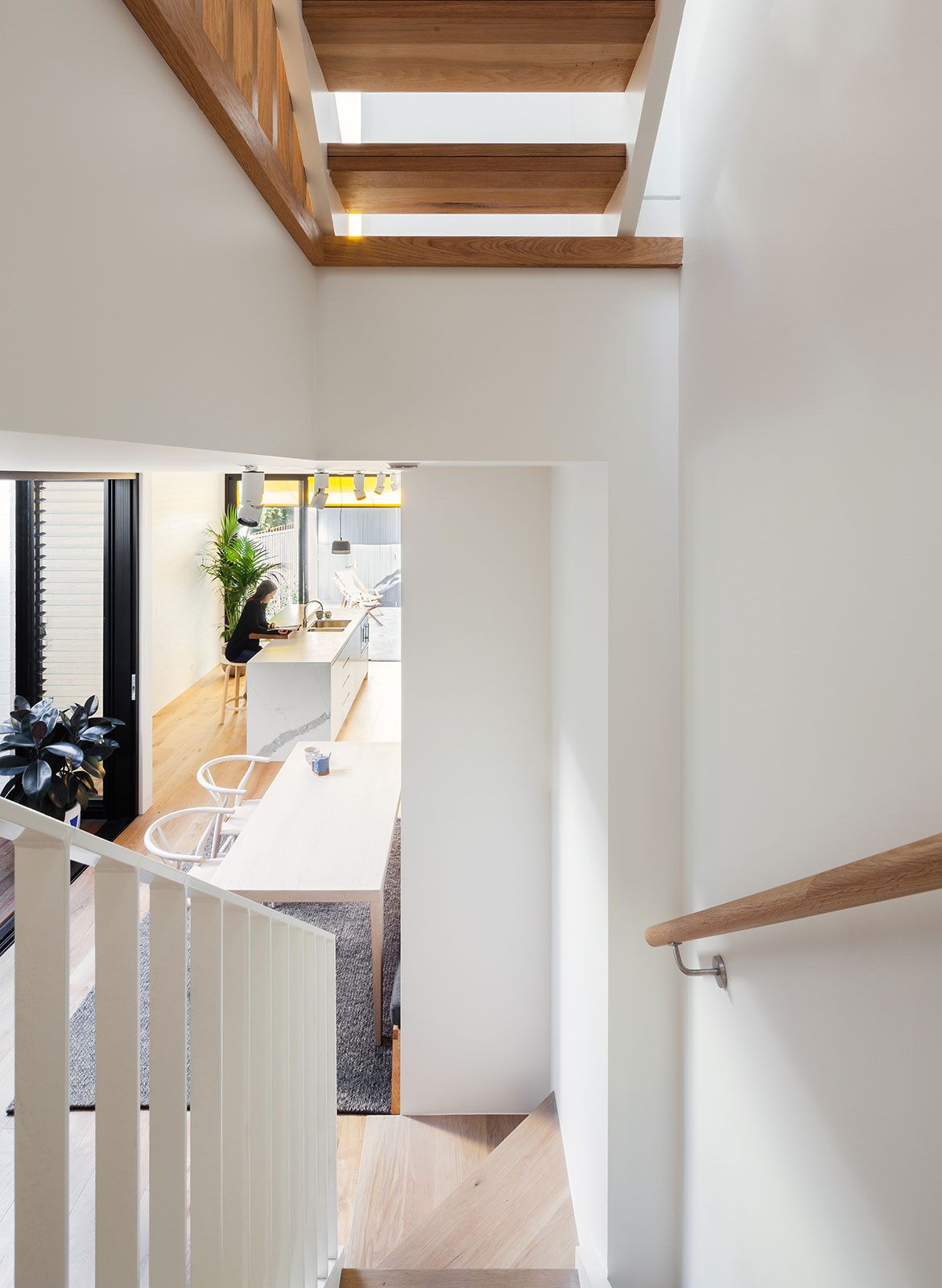 They used texture to insert warmth, such as sustainably certified oak timber, marble in the kitchen, painting exposed brick. In the bathrooms and over the stairs, Michael added skylights to allow ample light to stream in. In the bathrooms, the bright light and fresh white paint were balanced by handmade Spanish tiles that gave texture and an earthy, warmth. The timber runs throughout the house, from the stairs to the floorboard, the bathroom cabinets, and cleverly designed wooden bench form the kitchen island.

To prevent the house from looking too sterile, the architect adopted a Scandinavian design aesthetic. 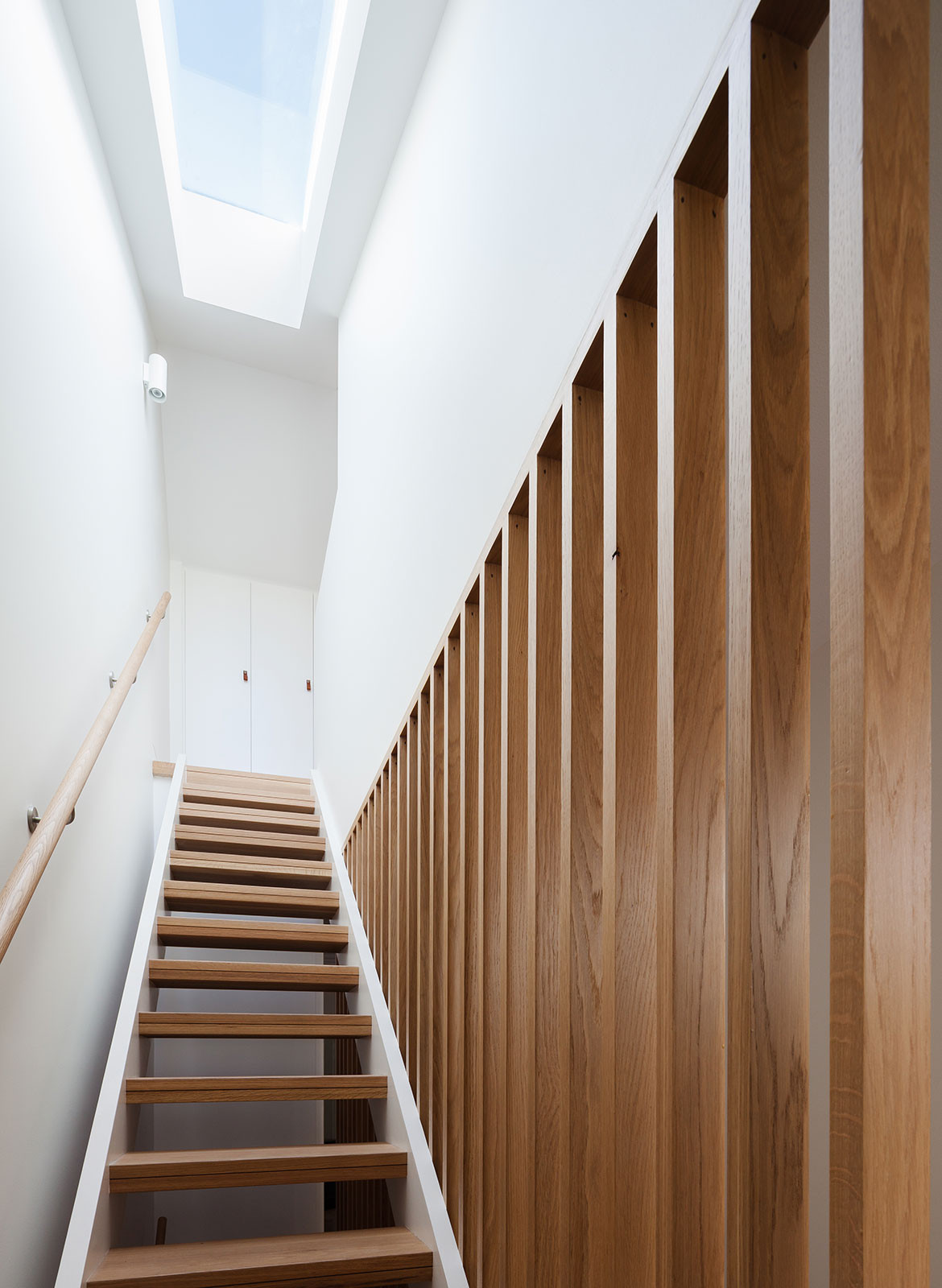 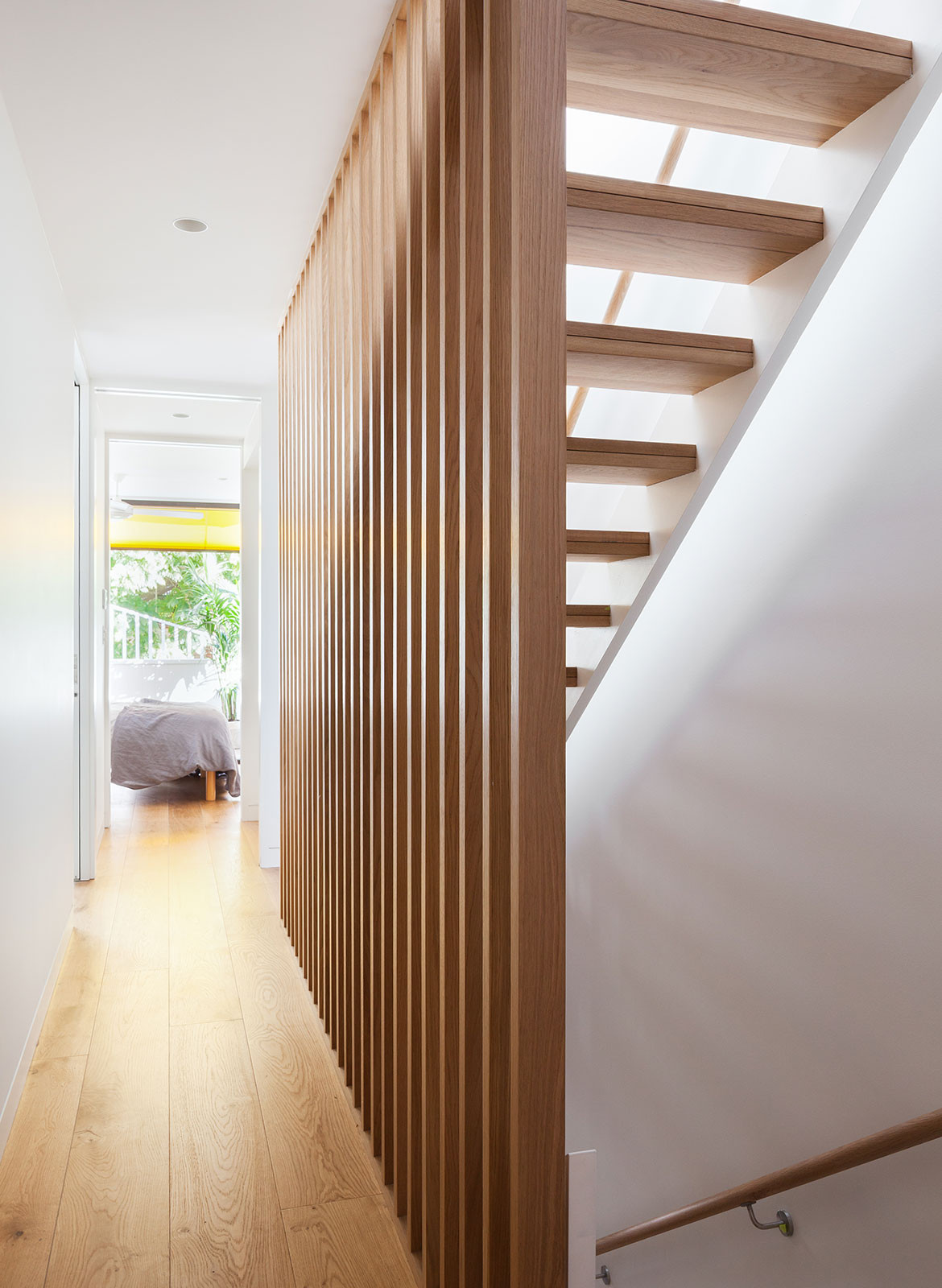 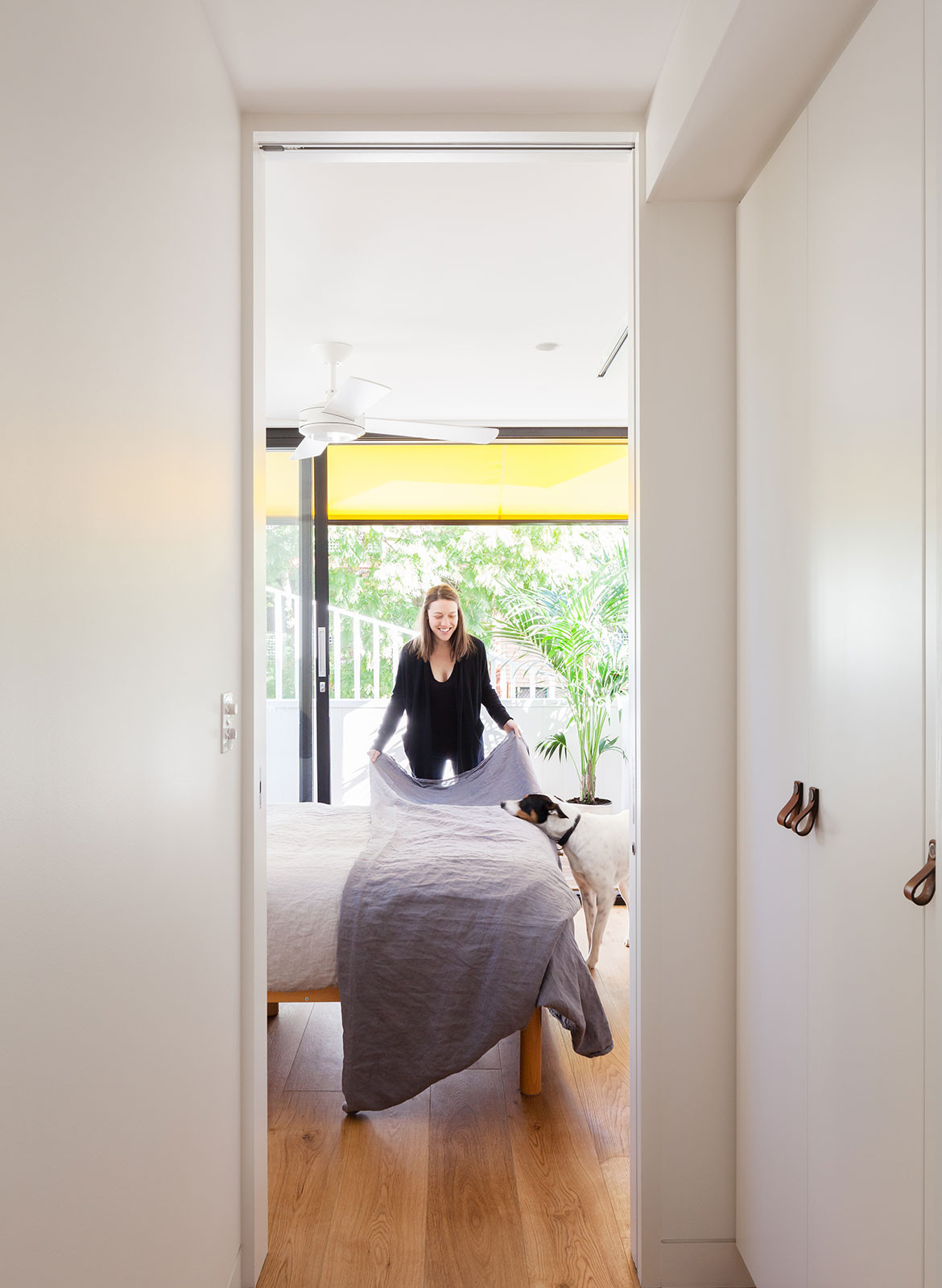 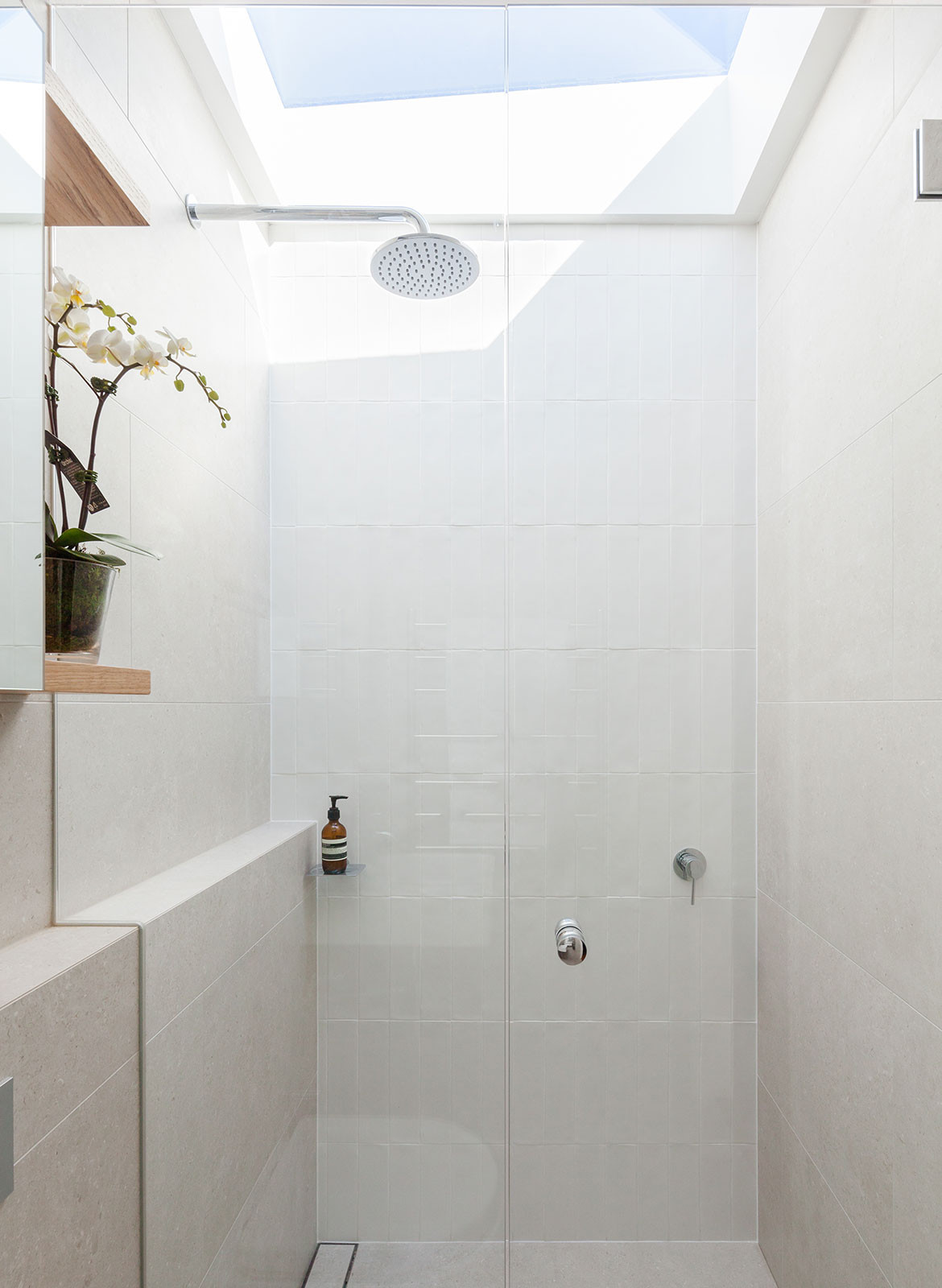 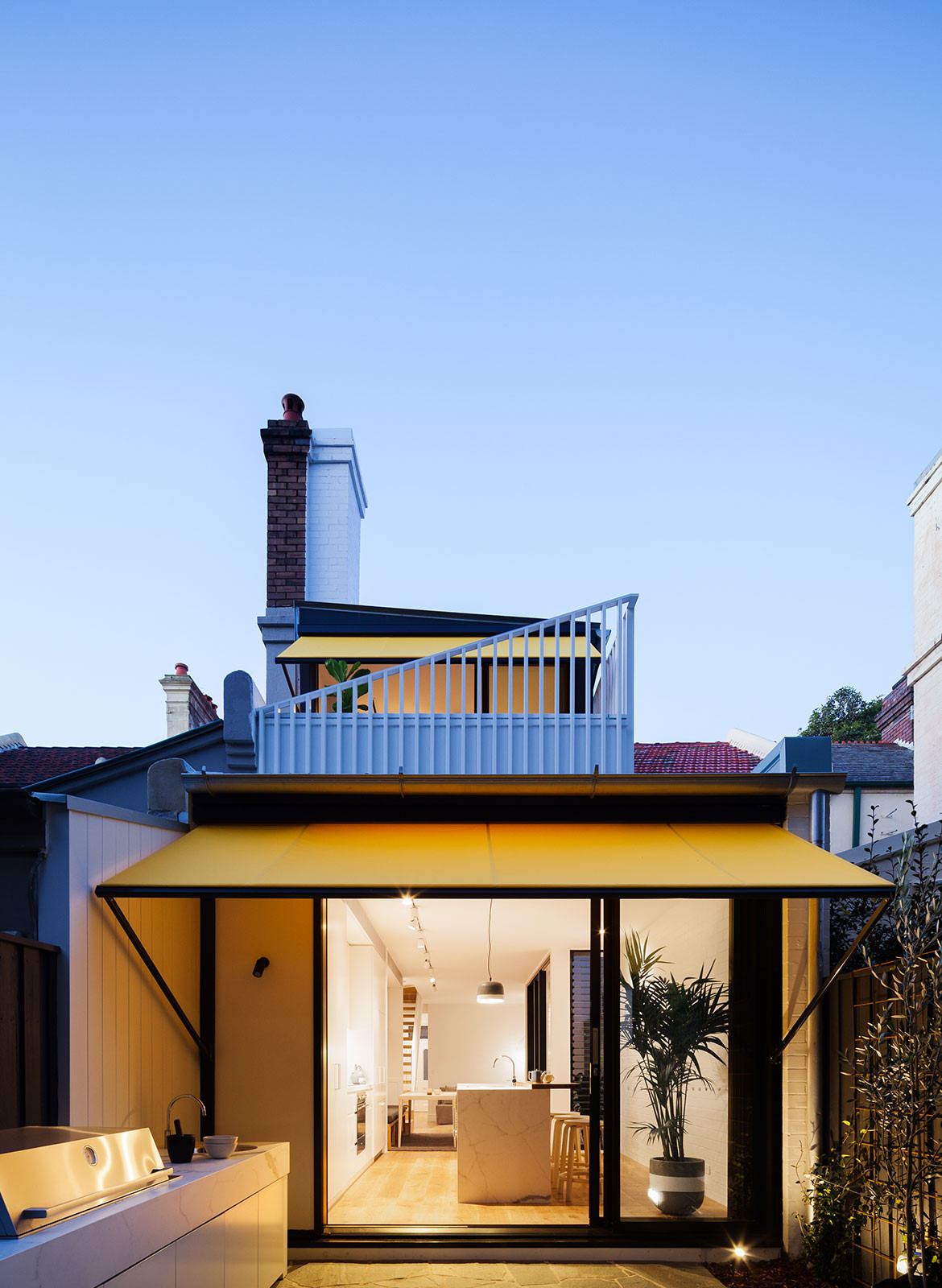 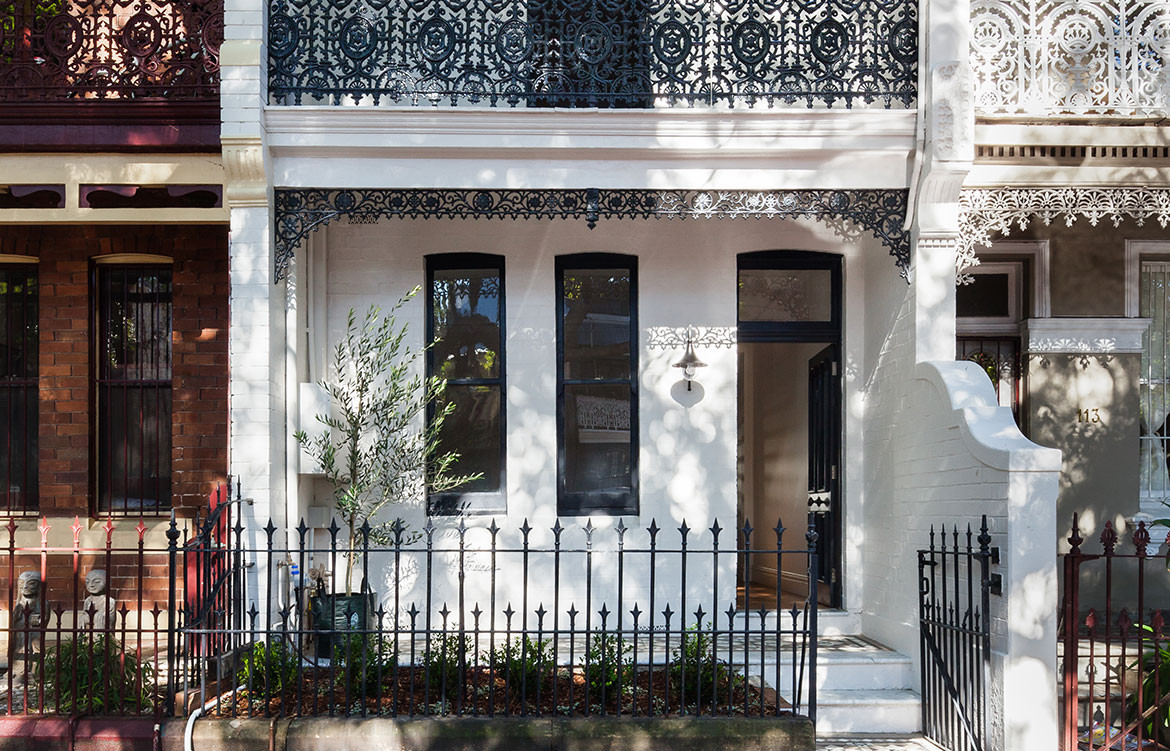