Casting a new shadow with Shad.. 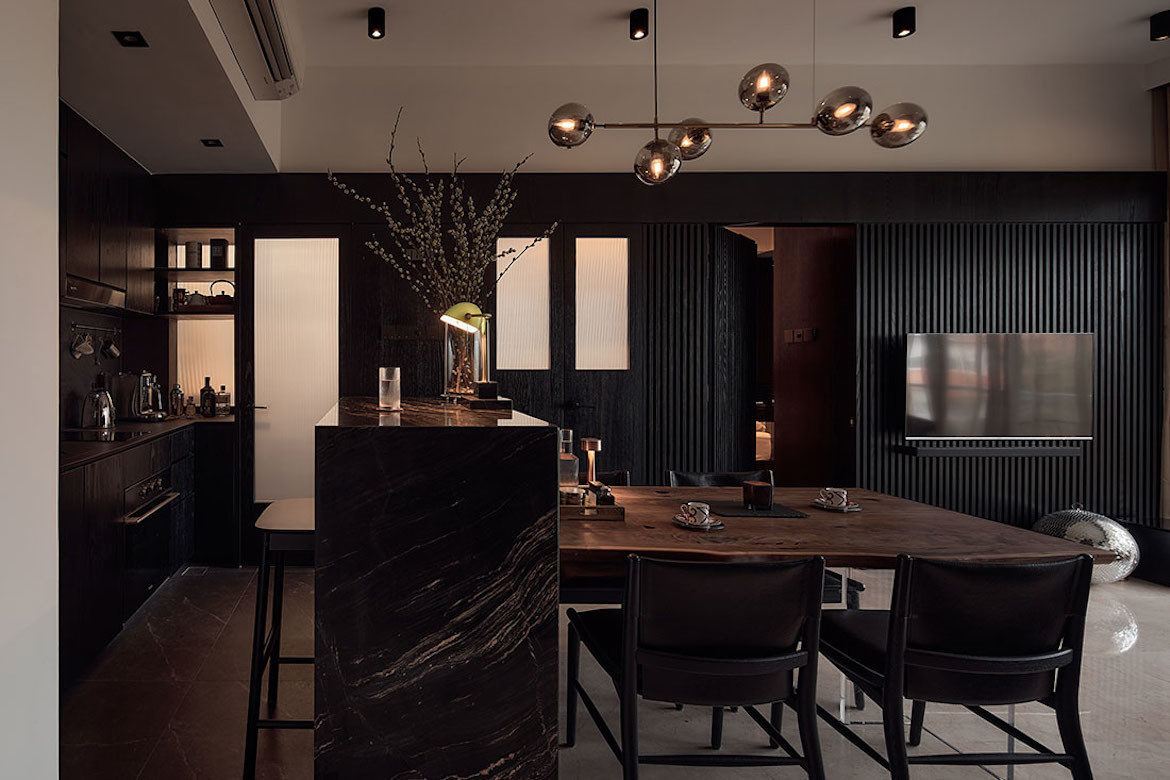 Dark and handsome is one of the many ways to describe this luxerious apartment. The further you enter this condo apartment, the more at home you become.

This one-bedroom apartment exudes polish and sophistication from the moment you step inside. The design language is classy, with dark wood elements and mirrored surfaces creating depth but it is the pragmatic reinterpretation of the space that really ups the ante and gives this home its x-factor.

Redesigning the interior, Ben Ang from Space Change recreated the space which used to be clunky and underutilised.

The dramatic transformation begins right at the entrance where an L-shaped built-in cabinet finished in smoky grey mirrors gives first insight into what lies ahead. The subtle yet ingenious wraparound effect speaks volumes of the thoughtful design considerations that have helped maximise form and function in this handsome apartment.

The new built-in cabinetry now presents the homeowner with plenty of storage for shoes, suitcases, etcetera, while the mirrored surfaces visually extend the sense of space and reflect light. An arched entrance was specifically created to soften the otherwise clean lines and provides a more inviting first impression.

The original layout featured a kitchen but had inadequate space for dining. “The homeowner lives alone but likes to have dinner parties and entertain friends, so a proper dining room needed to be incorporated,” says Ben Ang.

In order to achieve this, he removed the original kitchen counter and rearranged the space. Since the homeowner didn’t want a full-sized kitchen in the apartment, a compact kitchenette was created instead, freeing up valuable space that now allows for a comfortable dining area.

The pièce de résistance here is a live edge dining table slab from Grey and Sanders that fits into a stunning full-height marble island bar dressed in Portoro Rosa marble. “A special mortise and tenon joinery was used to connect the table slab into the marble bar. No glue or nails were utilised,” says Ben.

An acrylic base holds up the other end of the table and stylish dining chairs from B&B Italia complete the sexy new look.

The previous living room was awkward and did not allow for a proper entertaining area with a lopsided television wall that was cumbersome and inefficient. “Since the homeowner lives alone, it was the perfect opportunity to create a seamless feature wall to elongate the space and address the uneven television wall,” adds Ben.

Dark wood veneer panels were used for this purpose, allowing for an extended television wall with integrated storage. This feature also hides the entrance to the master bedroom.

In the master suite, the original layout has been tweaked to allow for a roomier space. The apartment’s sophisticated aesthetic continues here with custom shelving and bay window treatments in matching dark wood veneer.

The bathroom has also been completely renovated with new glass fluted doors that lead to an oasis of calm and allow light to flow through. Ben got rid of the original bathtub in accordance with the homeowner’s request and instead added an expansive walk-in shower and vanity wrapped in large format tiles from Hafary, for the win. 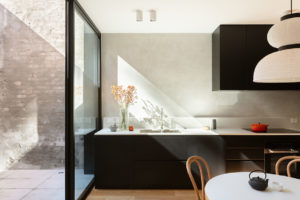 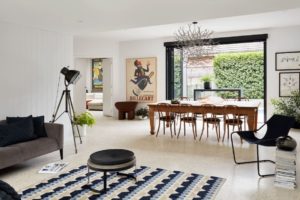 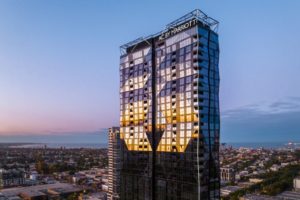