Last week saw the launch of the first artwork at Frasers Property’s Central Park on Broadway in Sydney.

Brook Andrew’s ‘Local Memory’ is the first installation at the Frasers Property’s Central Park, featuring 18 individual photographic portraits of people who have, in some way, been associated with the site – previously Carton United Brewery – from 1908 – 1998.

The photographs are lit and bordered with neon lights, creating a punchy new façade for the gritty industrial building. “Brook’s work depicts not only the workers but the brewery’s broader community,” explains Artists In Residence curator Anne Loxley.

“In researching this work he was interested not just in the workers, but also local residents, people who visited and drank at the pubs, kids who played in the area and even people who may have delivered or made other calls for various reasons at the brewery.”

Over the next 12 months 3 more artworks will be added to the Irving Street Brewery Building as part of the program – staying in place for up to 3 years. 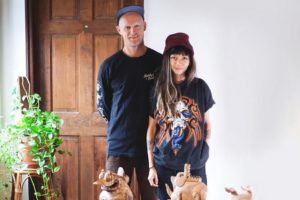