Immersive, grandiose and just the right amount of overwhelming, the audiovisual installation from acclaimed Japanese artist Ryoji Ikeda couples the raw power of the mediums with a pure, minimal concept.

The work creates an immersive experience of flickering black and white imagery and sound that pushes the threshold of human perception. test pattern [N°5] is comprised of five projectors that illuminate a floor space some 28 metres long and eight metres wide. Visitors will be invited to enter into this surreal environment and be submerged in an intensely stimulating context of projected and synchronized data and sound.

Ikeda’s work demonstrates that the often excessively abstract and difficult to access medium of audio-visual installations possesses enormous communicative potential, as regardless of what reaction a visitor might have to test pattern [N°5], it is bound to be powerful.

In 2011 Ikeda presented a major exhibition the transfinite of related work at The Park Avenue Armory, New York which was described by The New York Times as a ‘sublime spectacle’ and New York Magazine described Ikeda’s work as ‘an extreme and elaborate visual and sonic environment not to be missed.’

test pattern [N°5] will be on display at Carriageworks from June 8 to June 30.
carriageworks.com.au 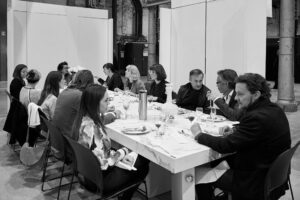 ‘Birds With Skymirrors’ at Carriageworks