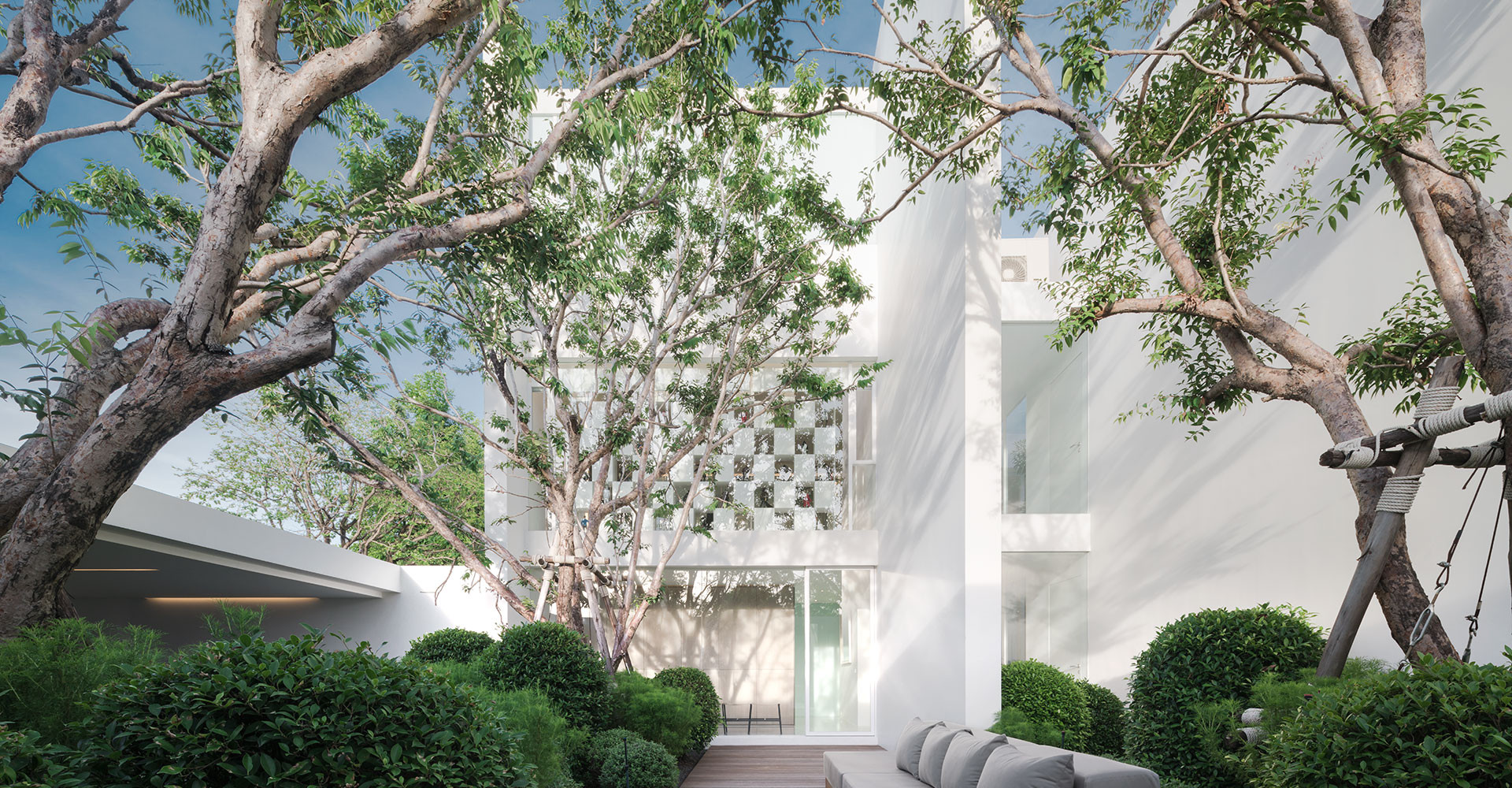 This is a residence in which the architecture and carefully considered landscaping are perfectly aligned.

Nestled in a quiet residential neighbourhood of Bangkok, Residence Rabbit is the work of Boondesign. Known for his unique and innovative design, architect Boonlert Hemvijitraphan here offers us another kind of solution for an urban home.
As a home for a young couple and their son, three requirements predicated the design of the house: it should be able to grow along with the gradual transformation of the lives of the occupants; it must accommodate two generations with widely differing preferences and needs; and it needed to provide close connection to the natural environment despite being located in the heart of a metropolis. These requirements have been translated into subtle but creative design solutions, with the architect simply considering such requirements as opportunities rather than problems.

The two-storey house occupies the site while leaving enough open space for a calming pool, large trees and an inviting lawn. As the owner, Attaporn Kobkongsanti, is a renowned landscape architect, the relationship between the house and the landscape was naturally crucial. By dividing the house into two closely interconnected volumes, the architects gave the owners the natural environment they so much wanted. The landscape becomes at once a protective buffer and an energising setting for the lives inside the house. 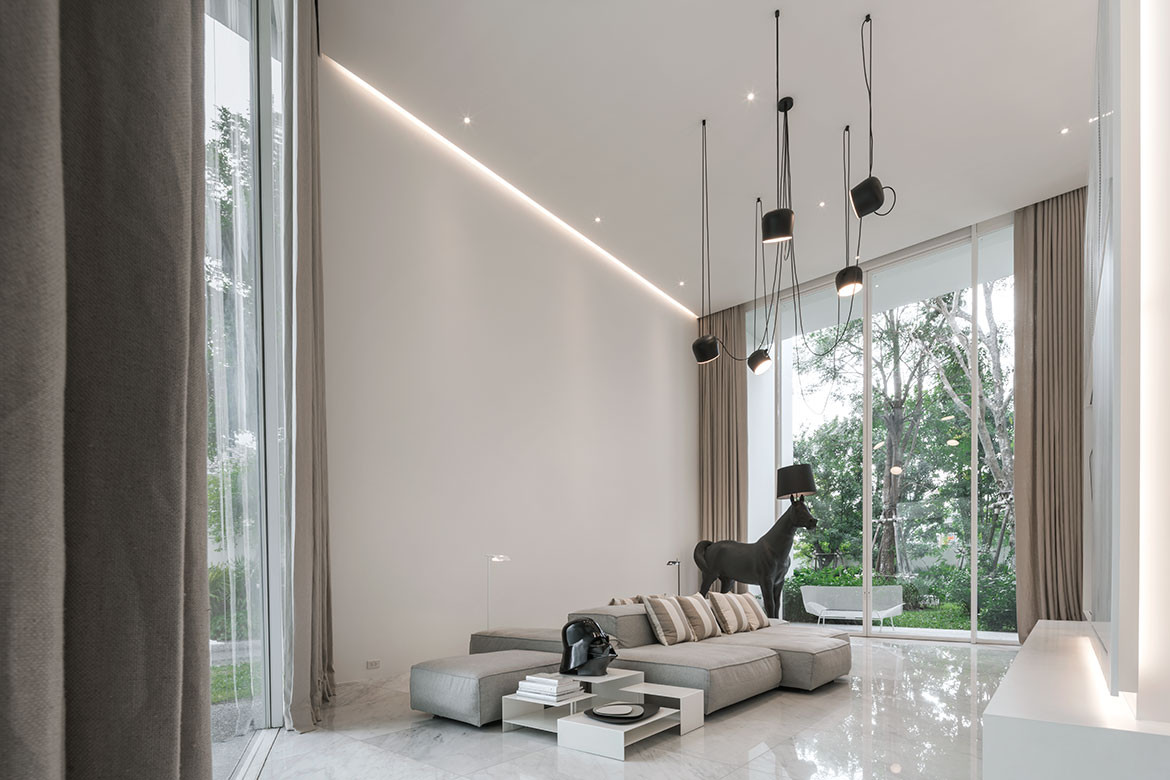 From its exterior, the house is subtly quiet, while the richness begins to show in its interior organisation and its integral relationship to the landscape. The stark white walls become a blank canvas juxtaposed against the surrounding landscape. The contextual meaning for this house is not so much about a dialogue with its neighbours, as a story about the constructed natural surroundings that allow the owner to be immersed in their richness. Factors such as the location and amount of sunlight are taken into account and translated into the house’s configuration as well as its openings. Given such a relationship between the house and its landscape, it becomes a place for the activities and experiences of the inhabitants rather than the expression of stylistic character from the outside.

Spaces in the house are positioned, organised and orchestrated as an ensemble of both interior and exterior places that reflect their activities. Everyone is given both private and collective spaces, thus living, working and playing within the house are simultaneously separated and joined. Activities flow easily from one space into the next. Hence, it is not difficult to imagine each space being reorganised and reshaped if the need were to arise. Rather than a complete object composed by the designer, the house seems like a container waiting to be filled by the owners’ actions. 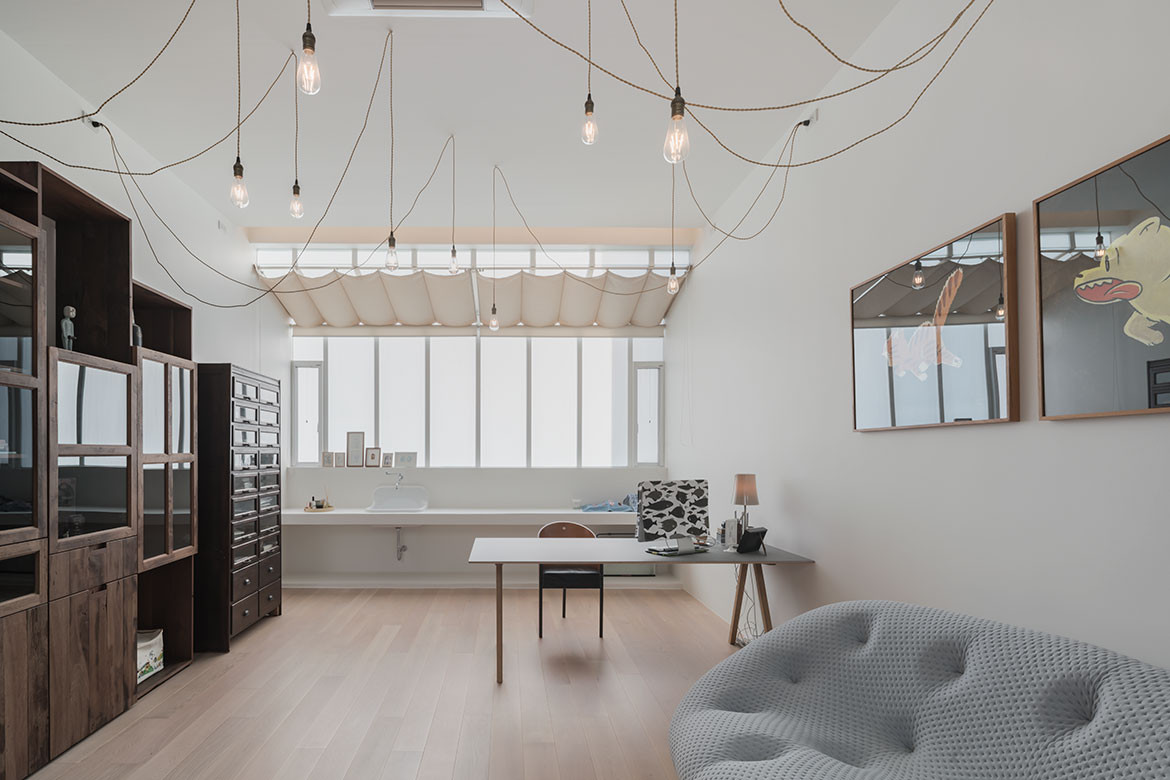 The house is equipped with a great sense of flexibility and the architecture is complemented by a spatial organisation that ensures that whatever is necessary for everyday living is easily accessed. Well-designed settings for living, cooking, dining, working and playing deploy their items so that they are always near enough to be useful, but can also be hidden from view. No single element in the spatial ensemble is positioned to stand out from the rest; no single piece of equipment intrudes into one’s awareness, but always with a sensitivity to established patterns of behaviour.

Both the architectural elements and the fittings and furnishings of the interior spaces are designed to last. And just as important as their stability is their flexibility. This allows the house to live and breathe while it envelopes life. Everything in the house can be re-configured to suit the changing needs of the occupants. This re-arrangement is facilitated by the fluid interior organisation of the spaces. Mostly open and free, the spaces of the house flow seamlessly from one part to the next. There is only the hint of territorial demarcation. And because of the openness, when the house is filled with friends and family, it becomes a welcoming social space filled with familiar objects around which everyone feels at home.

Through its configuration and constitutive elements, the house is designed as an ensemble of flexible spaces that allow internal and external factors to come into play. It furthers the notion of lived experience as a constant state of flux. Seeing it this way allows us to understand and imagine the real subject matter of the house’s design intent. 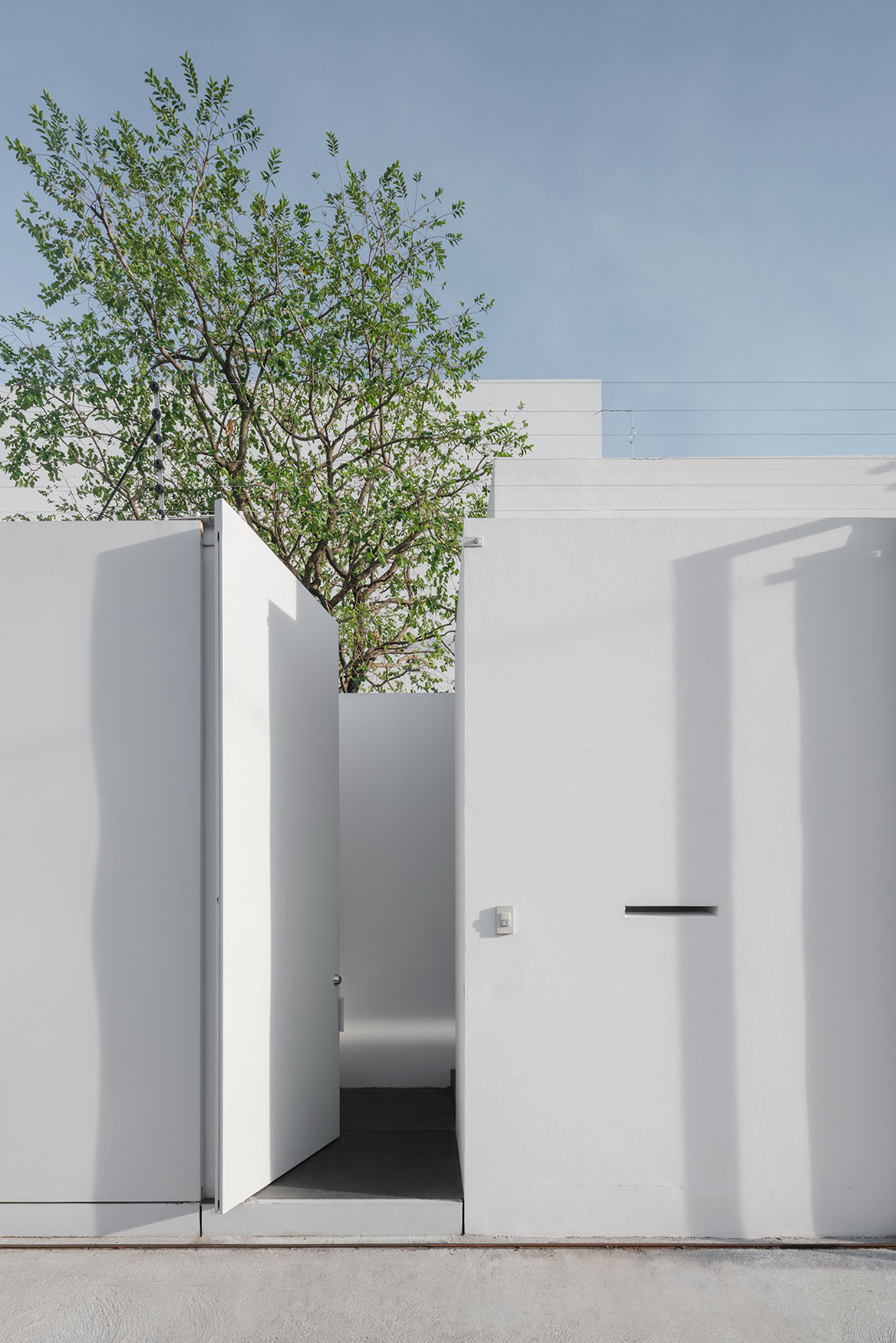 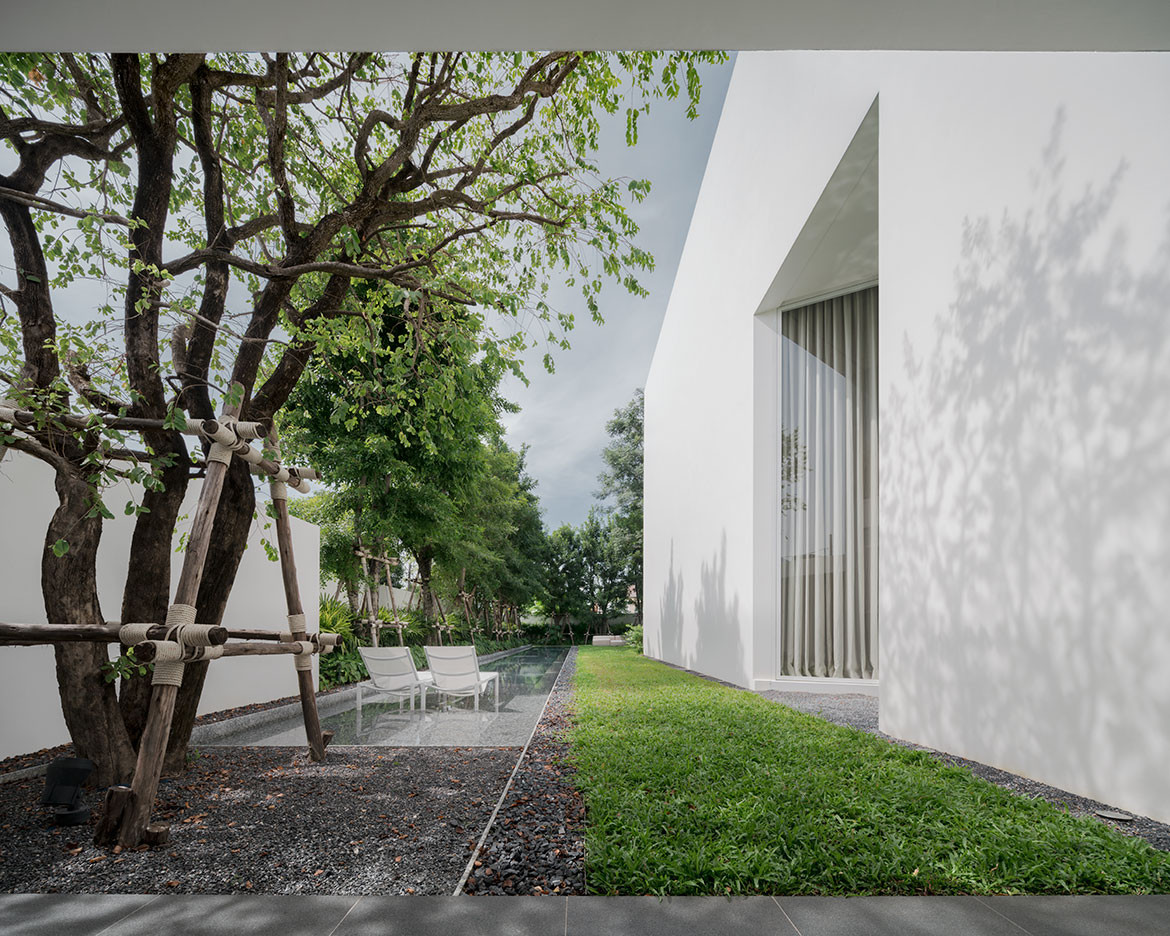 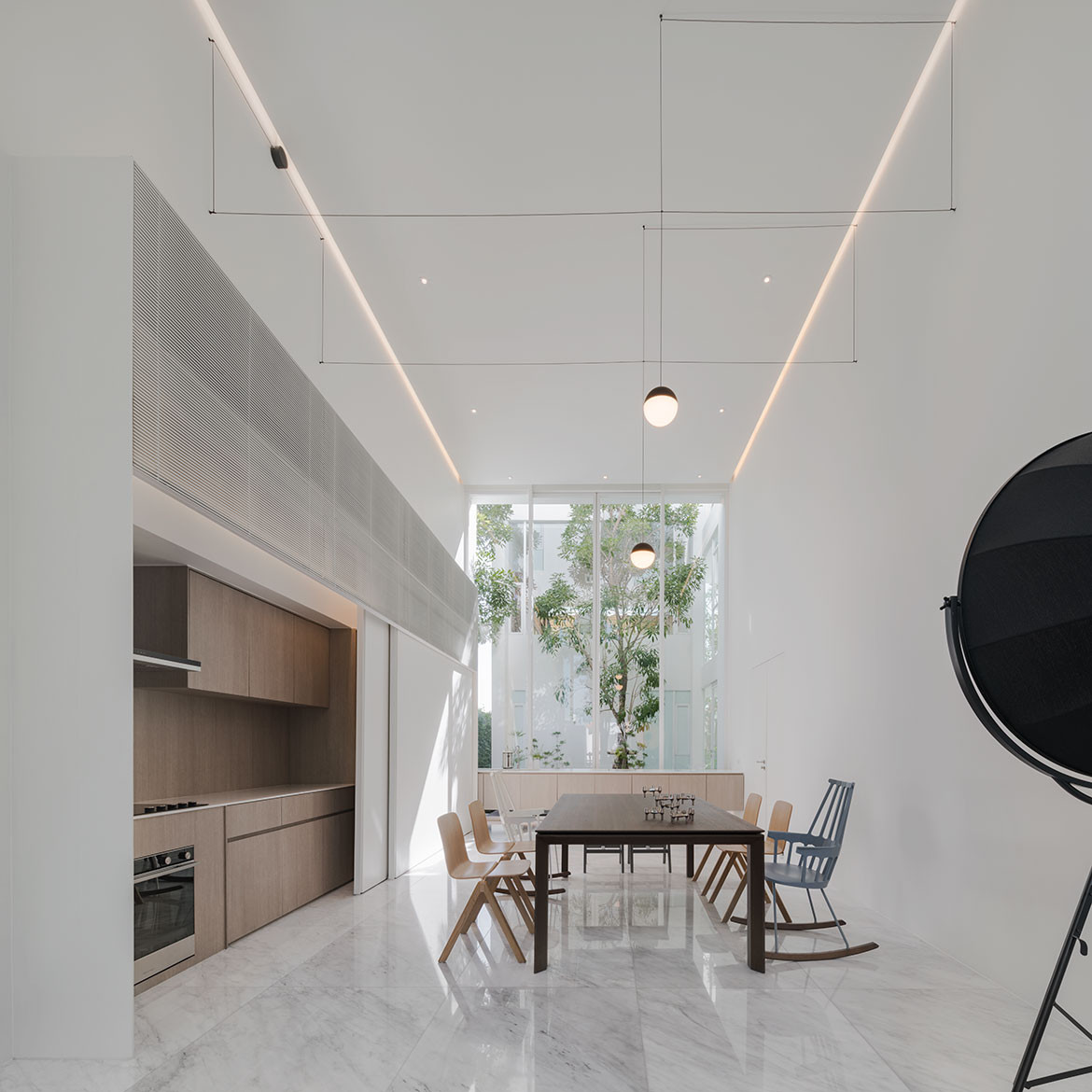 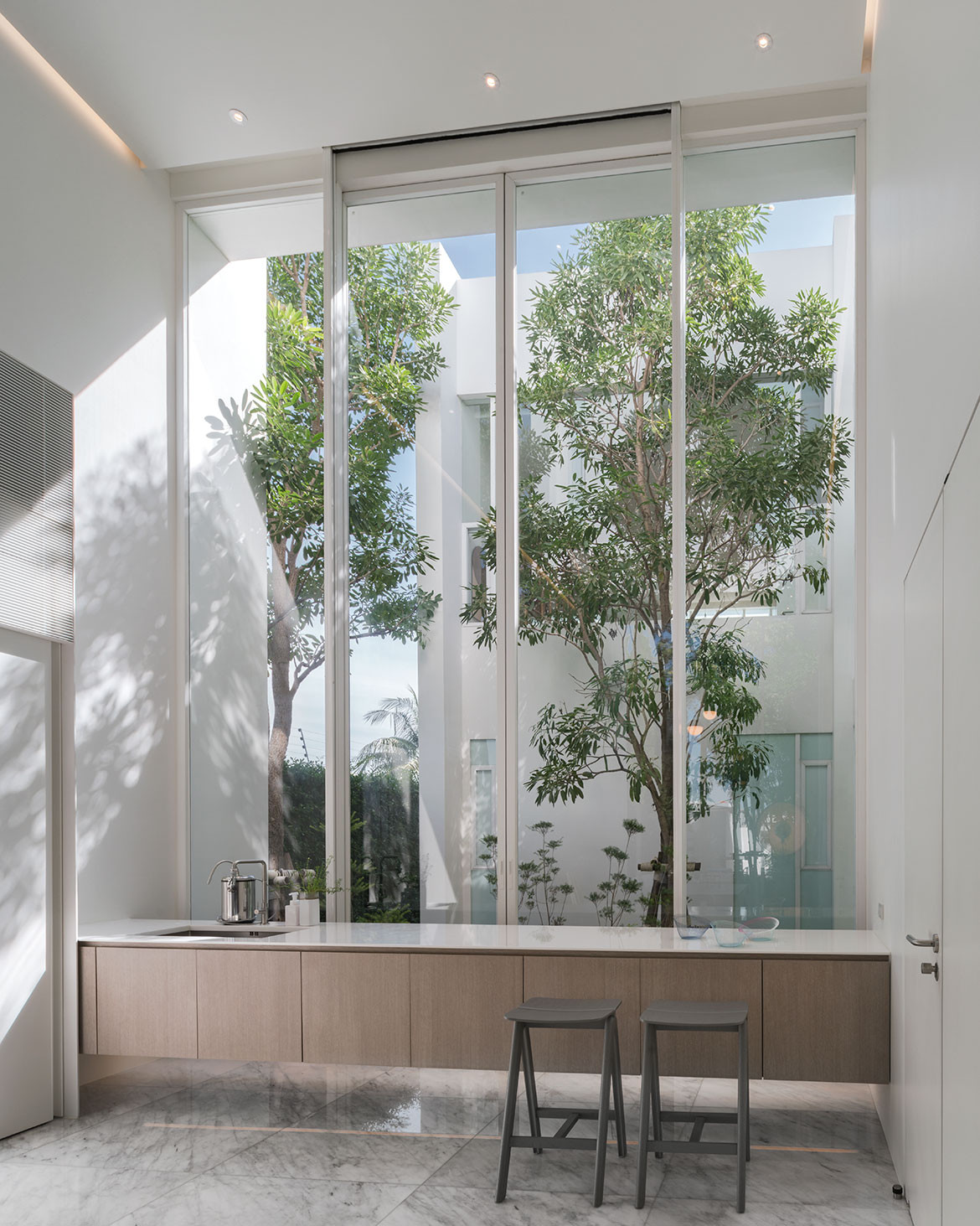 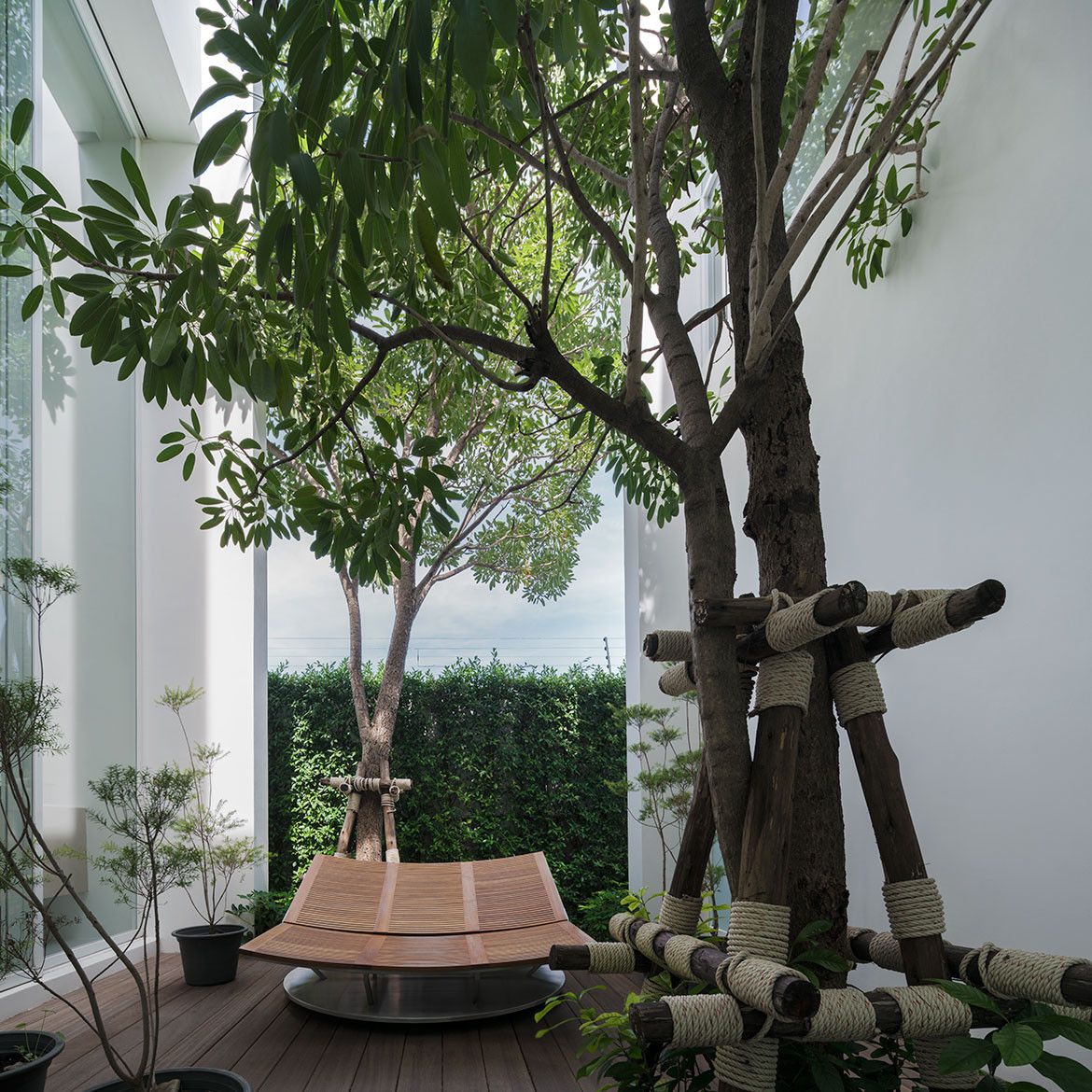 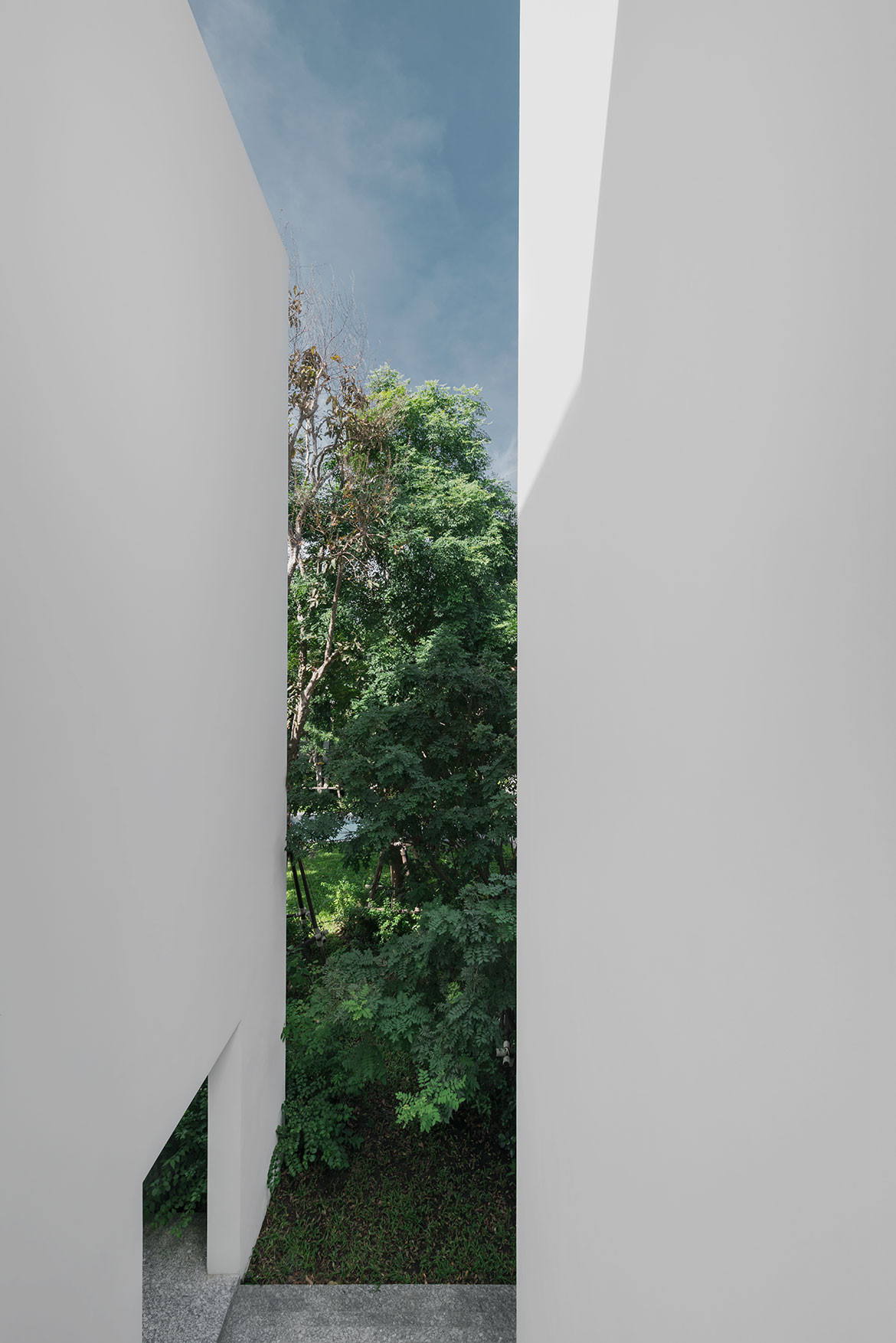 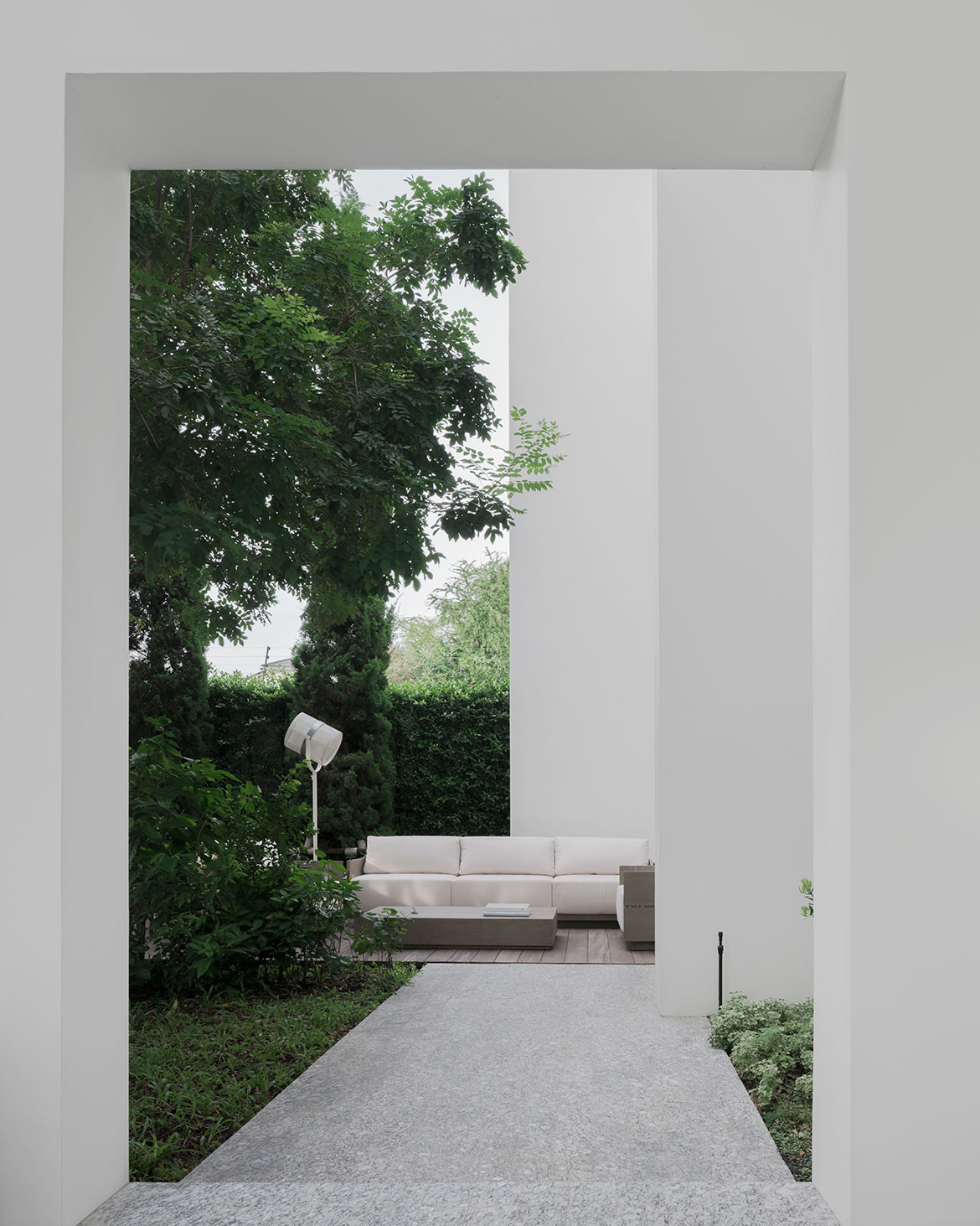 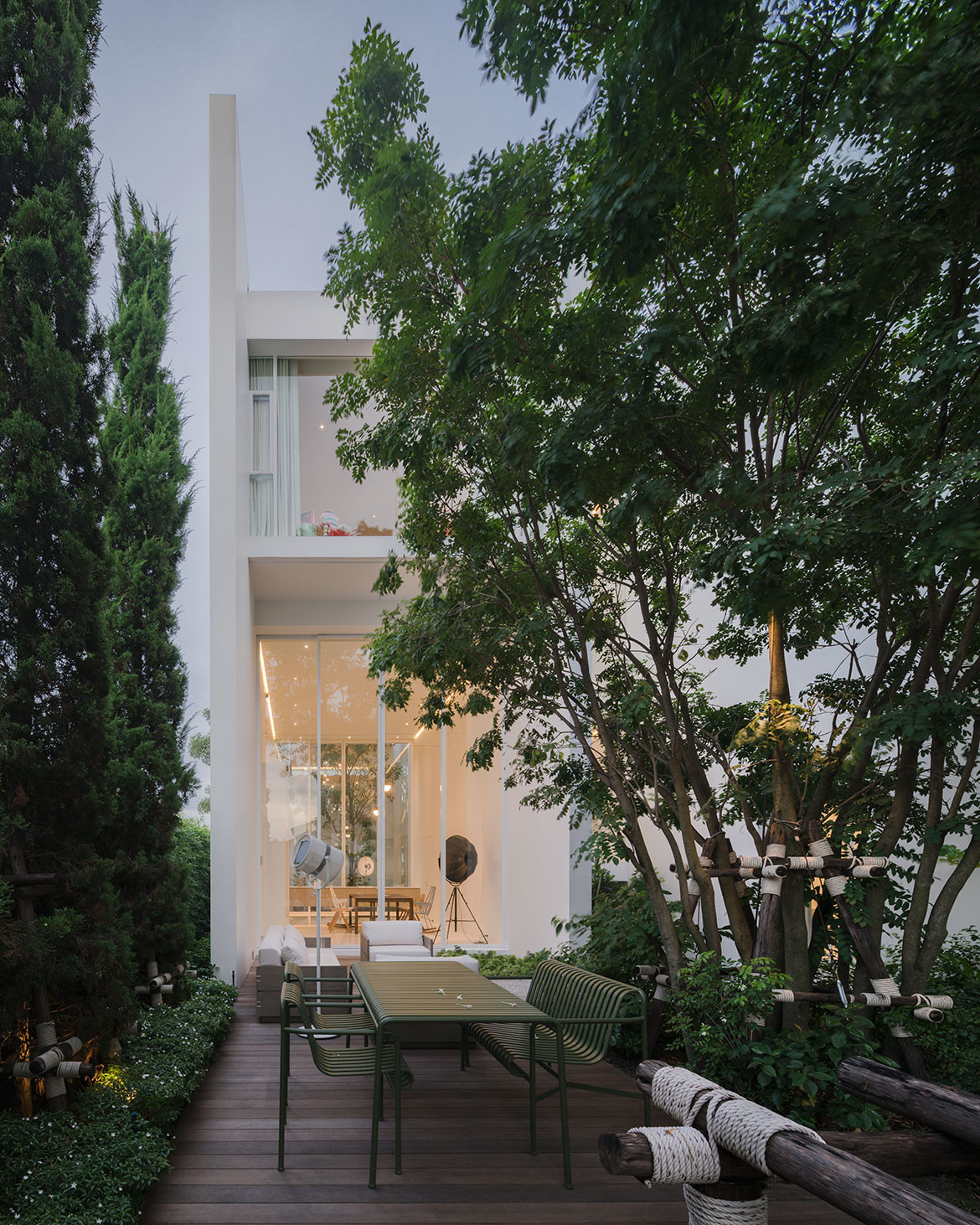 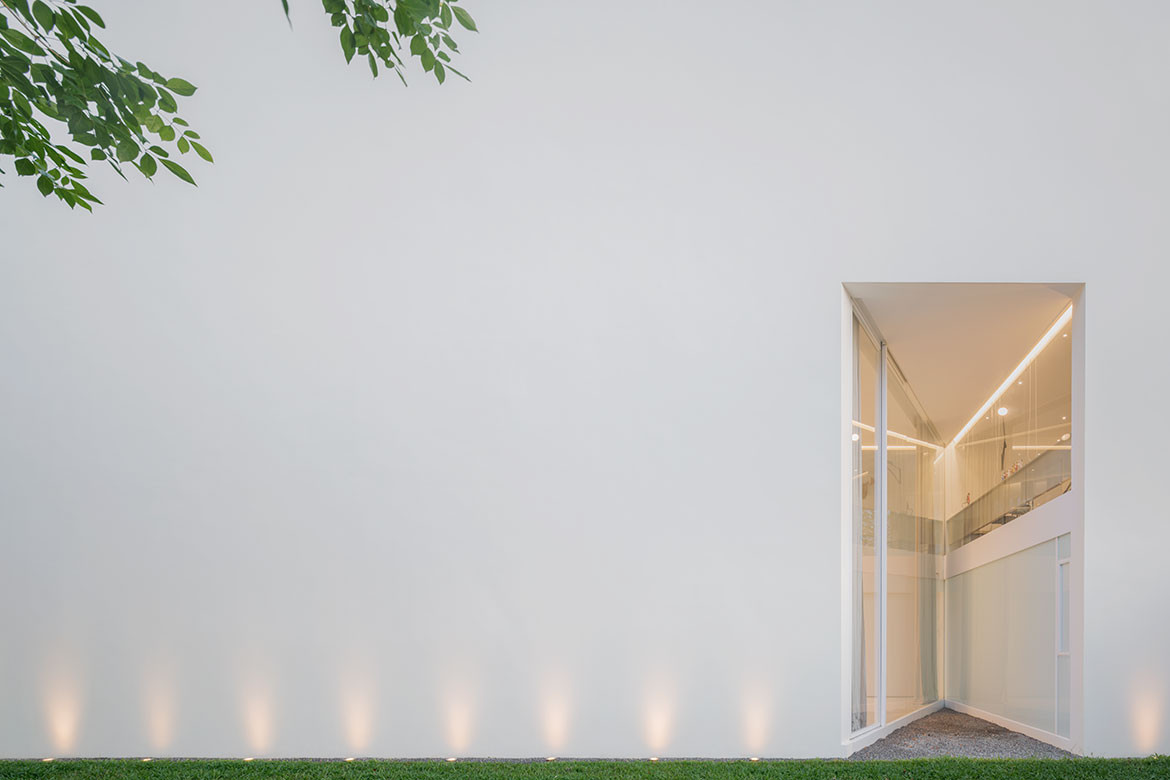 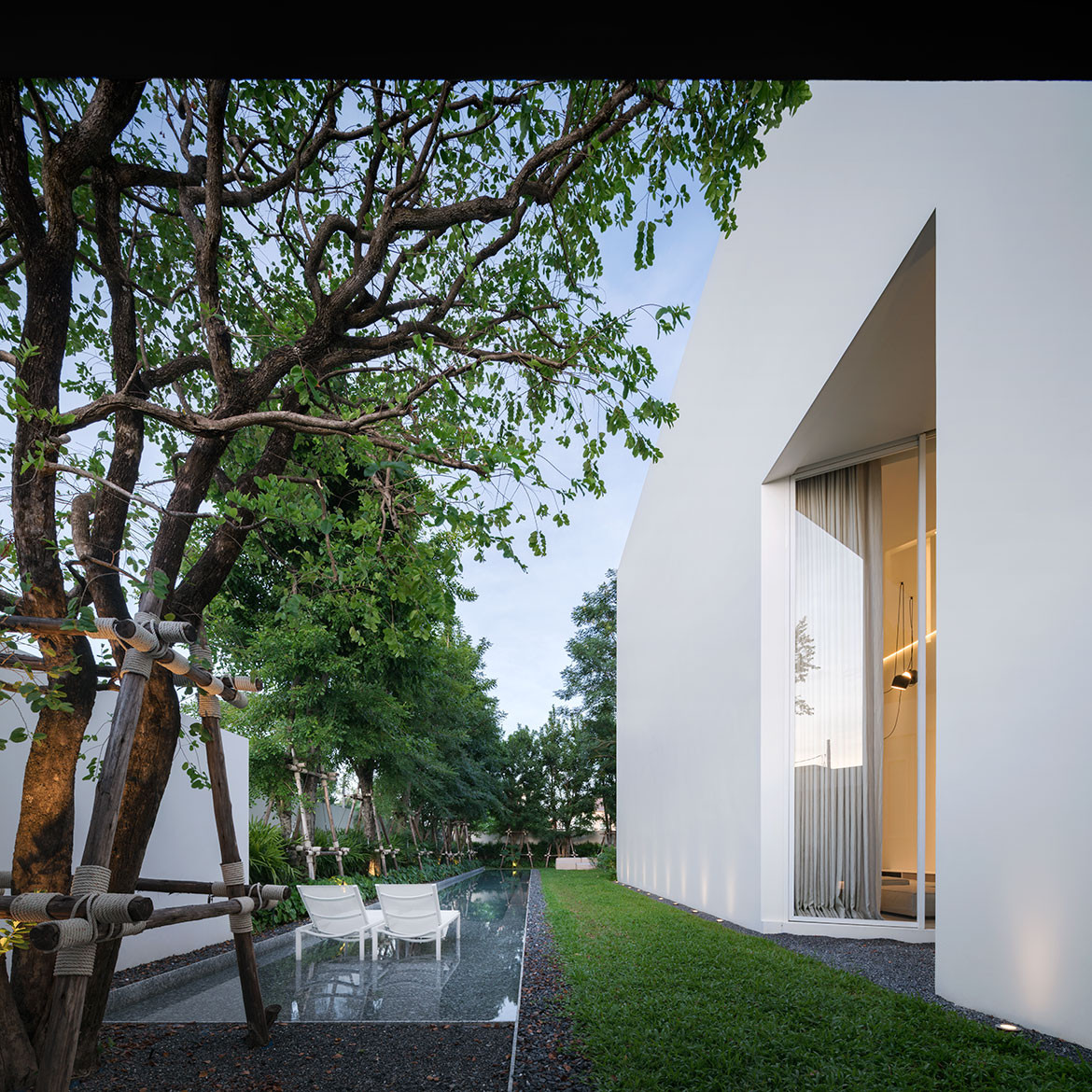 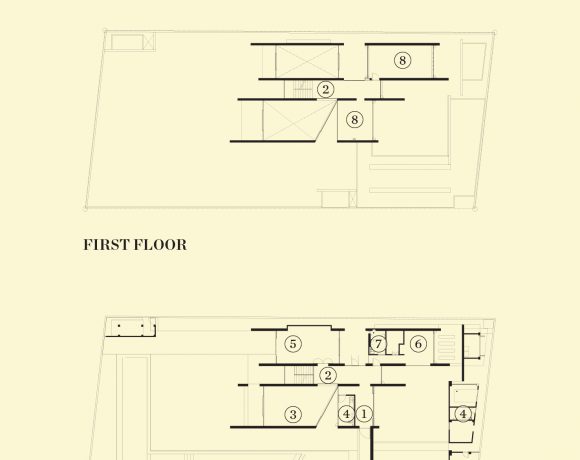