Watch This Space: Five Of The .. 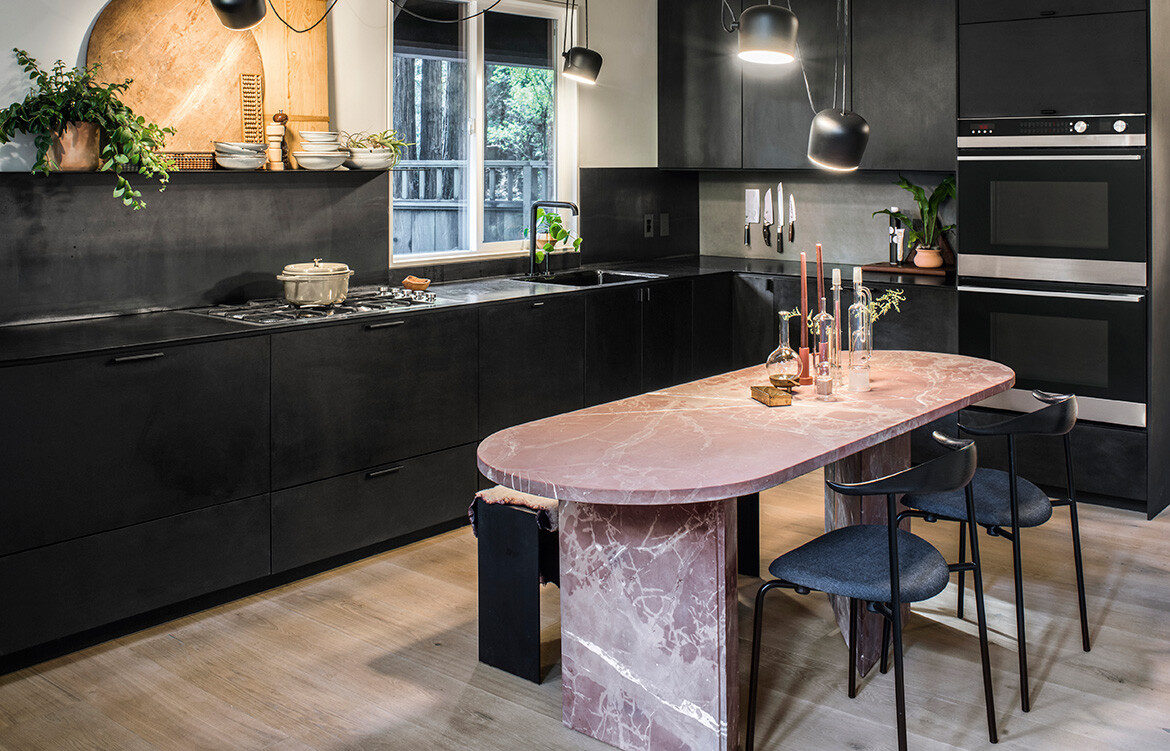 As the line between kitchen, dining and living areas continues to blur, it’s time to rethink just how we design our kitchen and cooking spaces.

Observational studies and research show that the 20th century separation between the kitchen, dining and living areas has progressively been broken down. This is clear in any modern home where the kitchen has evolved to become a space where a wider range of day-to-day tasks and activities takes place.

In answer to this, Fisher & Paykel has designed a suite of appliances that can be distributed throughout the kitchen to support different patterns of use. With this, designers and design lovers alike can fully configure and customize their kitchens to perfectly suit the way they work and live.

What if we designed a kitchen around the way we cook?

The modern kitchen is as much about socialising or relaxing as it is cooking or preparing food. For Fisher & Paykel this led to the development of the concept of the distributed kitchen. Essentially, this means separating the basic components of a kitchen, which in turn allows for more flexibility and easy movement within the space.

For example, the savvy designer might install a CoolDrawer™ Multi-temperature Drawer for drinks near the dining table, and perhaps a DishDrawer™ dishwasher for crockery by the sink, with another one for glasses by the bar.

Design-savvy couple Daniel and Brit Epperson redesigned the small, awkward kitchen of their rustic cabin in the woods to better cater to their particular needs and lifestyle. The result is a charming, unconventional design, with two ovens and two separate CoolDrawers in places of a single refrigerator. 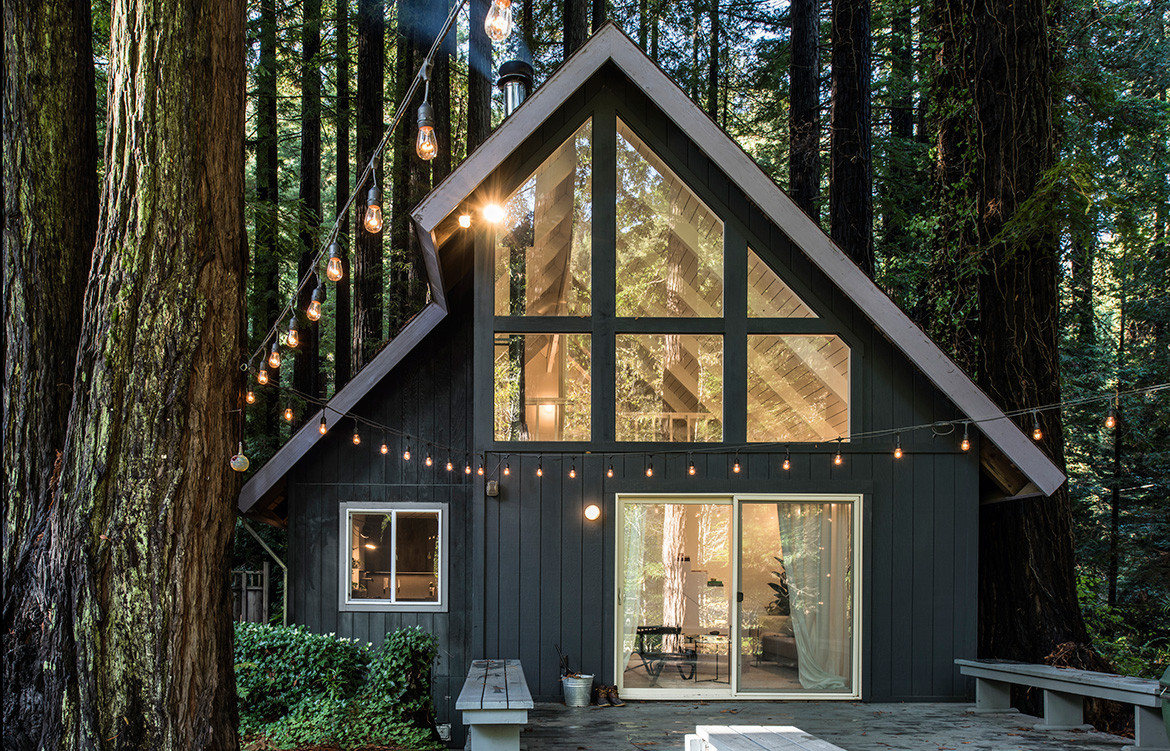 This designer couple created warmth and intimacy with a striking, minimal all-black kitchen set into a soaring space painted all white.

Set among mature redwoods on the bank of the Austin Creek in Cazadero, the cabin is nestled amongst a small, former logging community in western Sonoma County, CA. The timber A-frame cabin is a classic of its kind, combining a small footprint with high, sloping ceilings and large internal spaces.

“The redwoods are both wonderful and terrible, because they’re so majestic but they block out the sun,” says Daniel, who is a design director with bicoastal studio Rapt. “The cabin is also built out of redwood timber, which is very porous, so over the years it had soaked up the smell of smoke, dog, and who knows what else from along the Bohemian Highway.”

Brit, who founded the architectural studio PLOW, opened up the rear wall of the cabin, which overlooks the deck and river, with large areas of asymmetric glazing to bring in more light. The couple then repainted the entire interior white, effectively creating a blank canvas to bounce the light off.

“Having this brilliant white box in the woods allowed us to maximize the effect of any sunlight we could bring in,” says Daniel. “So that became the shell within which we were working, and we could play with contrasts or soft tones of color.” 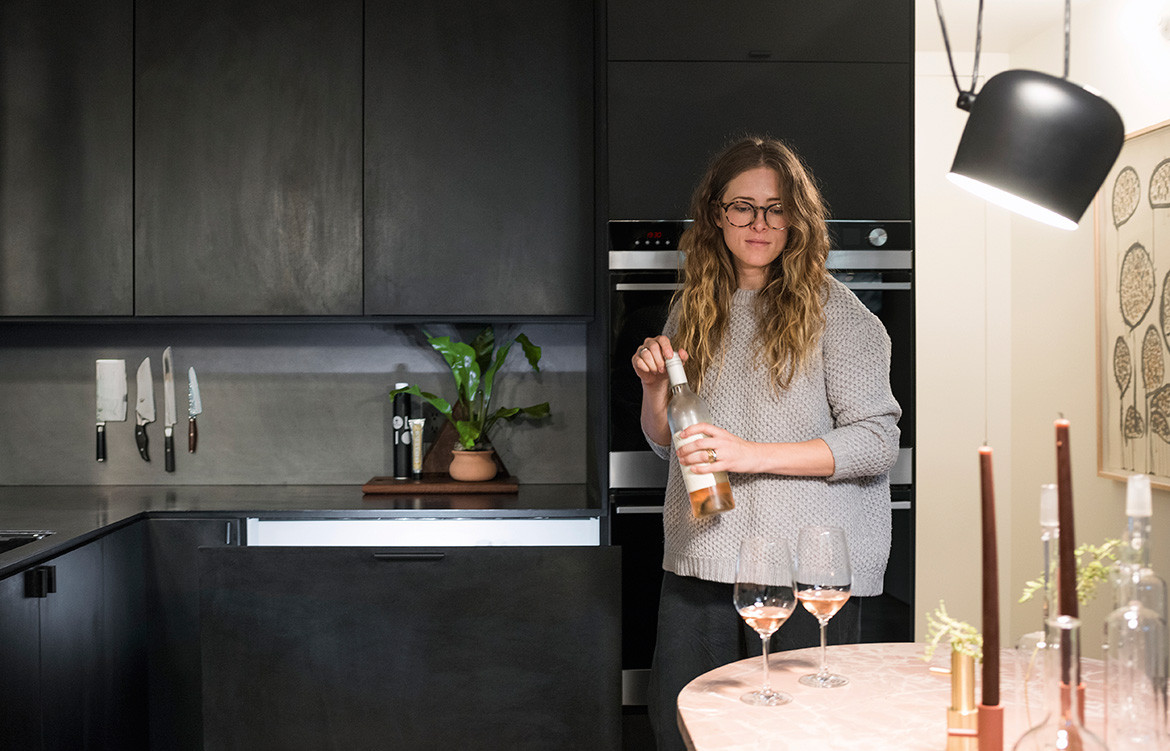 Though still modest in size, the kitchen was originally only half its present size. An awkward partition under the mezzanine created an internal hallway to the bathroom along its inner wall, which the couple quickly removed.

Structurally, the kitchen was built out of Ikea cabinets that Brit and Daniel hacked by using the framed box and building their own custom front and side panels faced with Valchromat, a recycled engineered wood product. 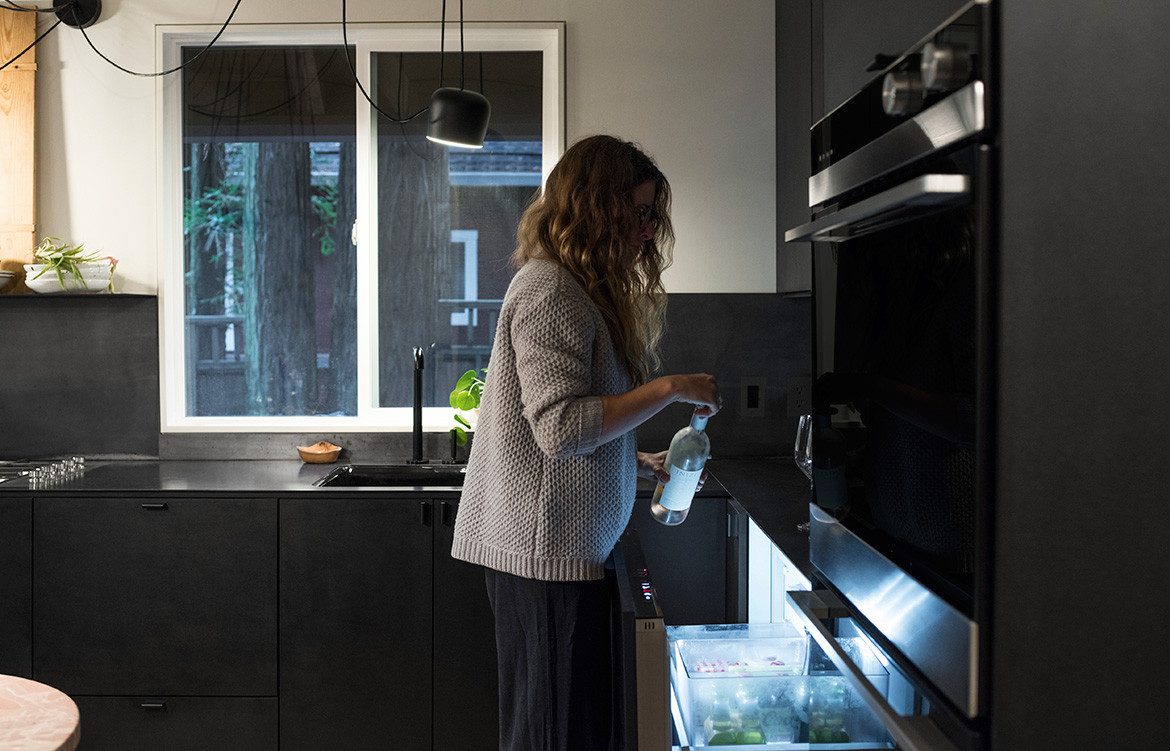 The metal they chose for the visible surfaces within the kitchen was both an economic decision and an aesthetic one, says Daniel. “We wanted to find an inexpensive way of doing a really terrific kitchen. The metal, which is a cold-rolled sheet of blackened steel, is a unique material that will develop a patina over time, but also be super durable, and again very cost effective.”

After the dark colour, the most immediately noticeable difference between this and a traditional kitchen is the lack of a standing fridge and the addition of two wall-mounted ovens, a conscious decision on the part of the designers.

Being primarily the spot of a weekend away, the appliances are distributed around the kitchen for flexibility. The use of the two separate CoolDrawers™ under the counter in different spots in place of one fridge is a unique and arresting design choice. Wine can be chilled, or weekend food can be stored, while the two ovens allow Daniel and Brit to, for example, bake bread and roast meat at the same time. 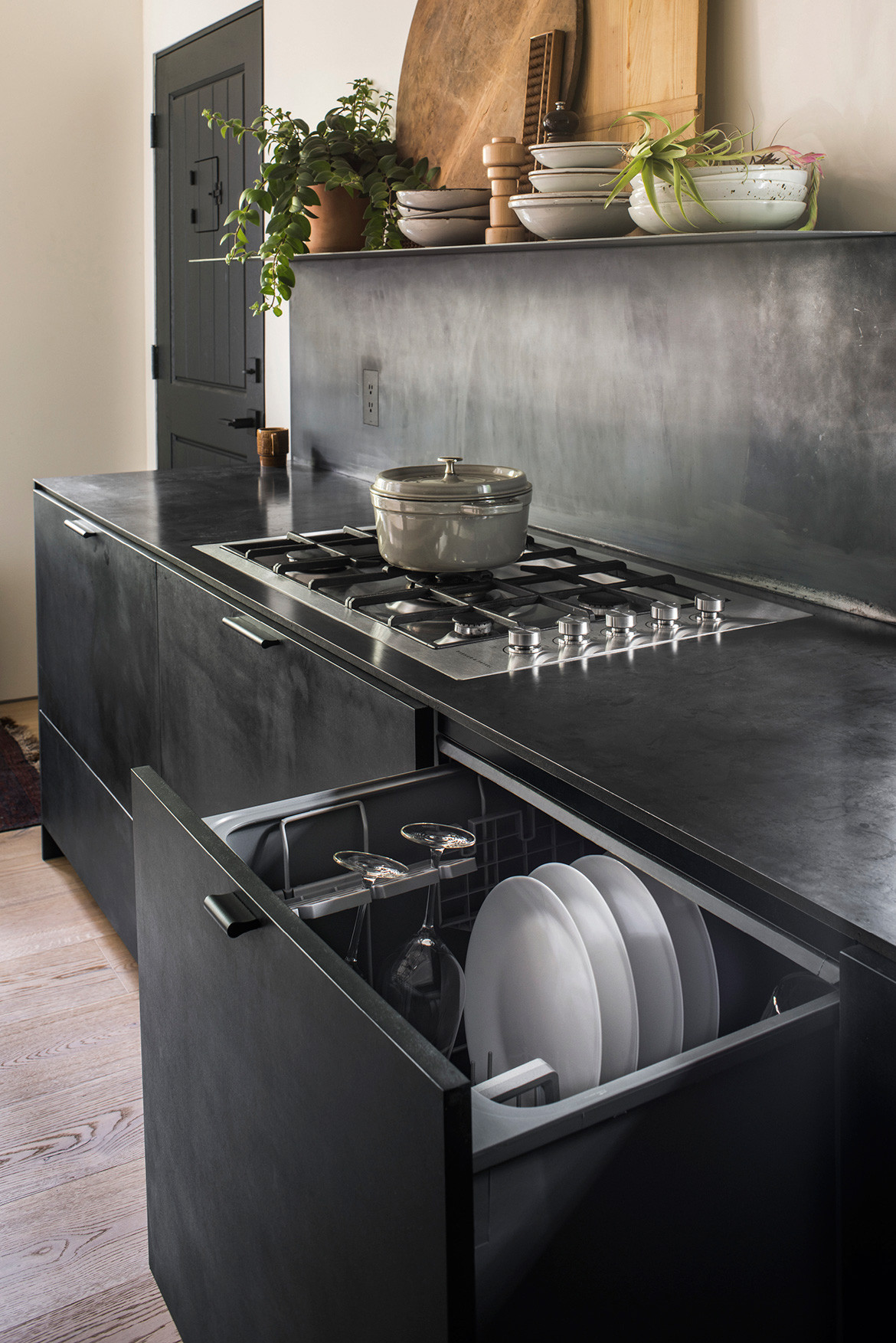 “It just works really well for us,” says Daniel. “Our counter space is at a premium, and we just didn’t need a giant refrigerator. This way, we can have the L-shaped counter. That was a very strategic decision. It doesn’t need to be more than what it is.”

And then, there’s the table. A weighty, sculptural piece made of blush-coloured Rojo Alicante marble, at first glance it could easily be mistaken for part of a contemporary collection from a Bay Area design studio. 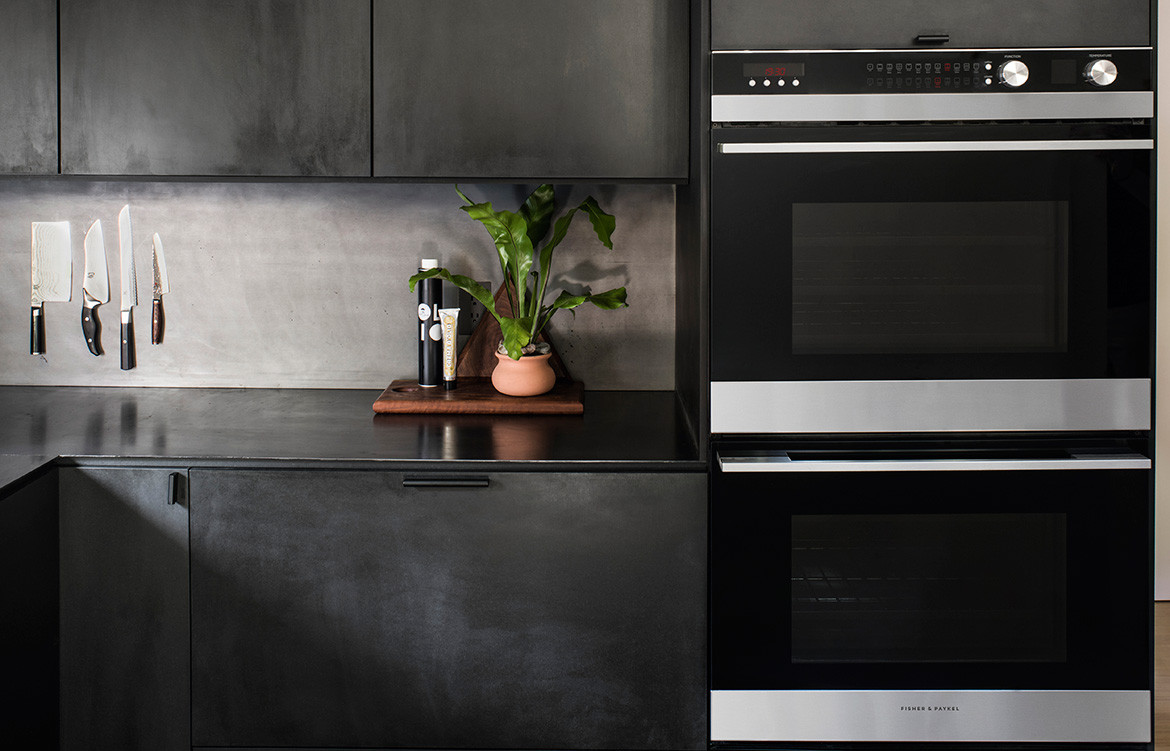 In fact, it’s another inexpensive kitchen hack. “I bought it off Craigslist for $200,” laughs Daniel. “It was really a diamond in the rough. Originally it was a rectangle shape, in a weird, 90s, Italian kind of style, covered in a thick, resin-like finish that made it look almost orange.” 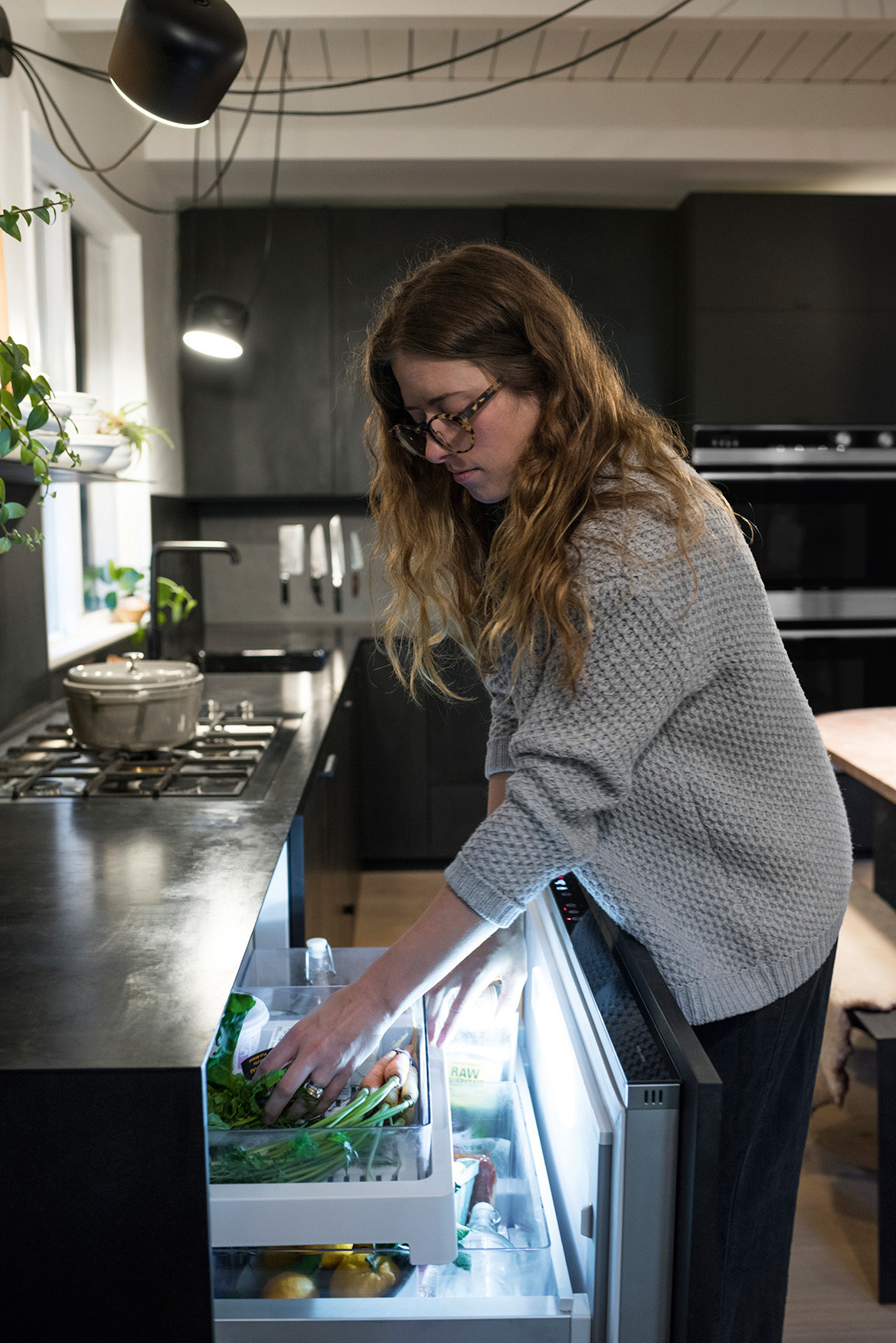 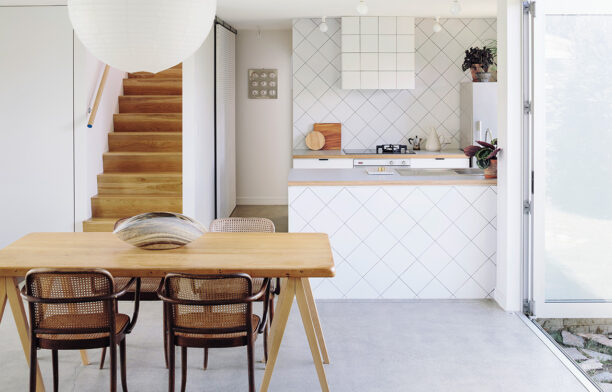 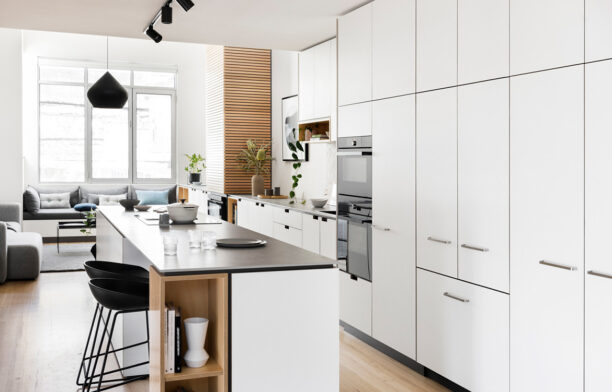 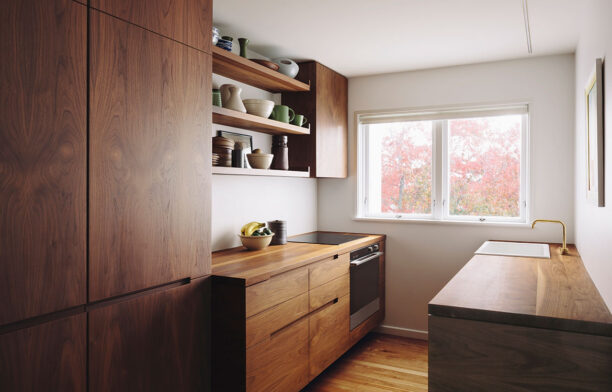 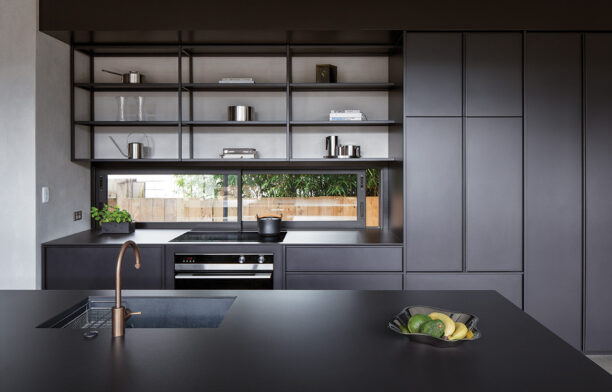 The Integrated Kitchen And The Modern Home