Vacation Living In The Heart o.. 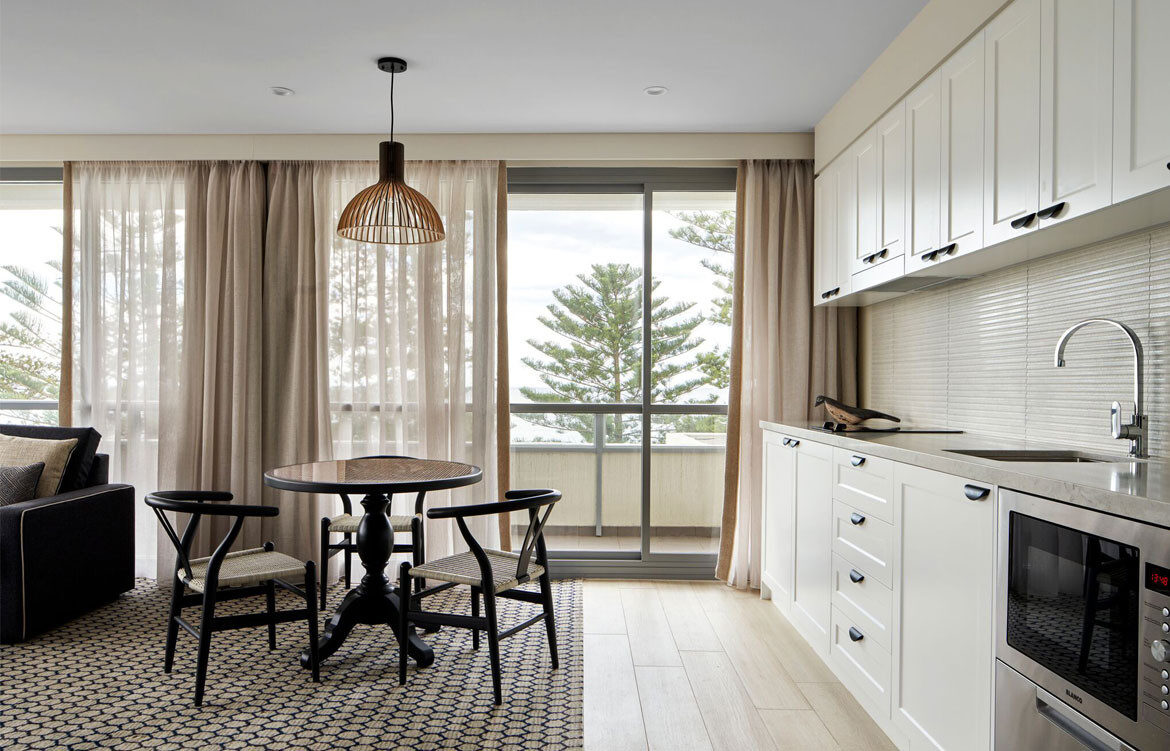 The timeless curves of Pheonix Tapware’s Cerchio and Vivid Slimline ranges echo the sentiment of coastal luxury at The Sebel in Manly, Sydney.

Since it first opened its doors in 1963, The Sebel hotel has been a mainstay of Manly situated a stone’s throw from the iconic beach on Sydney’s lower north shore. While the boutique design hotel is almost as loved as the beach by the locals and guests, that’s not to say after half a century the interiors don’t need a refresh now and then to stay current.

Recently, and at the hands of In Design International, that is just what happened. With a budget of 2.6 million for the interior renovation, the Melbourne-based multi-disciplinary interior design studio had near free-reign to specify only the highest quality, durable, and contemporary finishes, hardware and furniture. Moving through the venue one feels simultaneously at ease and in complete luxury.

As it happens, this was exactly the brief In Design International received: to create a “coastal luxury feel” at The Sebel to reflect its location and its clientele. To do this, Penny del Castillo, founder, principal and lead creative designer and her team visited Manly and its surrounding suburbs diligently documenting anything that gave them a sense of the area.

“We noticed that it is all about the beach and being outdoors in the Manly area,” explains Keirah Alexander, one of the interior designers. “We were inspired by the movement of the sand, flowers and fauna in the area and the tones – everything was a lot more subtle and soft in terms of colouring and textures.”

The team was also heavily inspired by the rocks and cliff front that lines the coast above and below Manly Beach. In honour of this natural, extraordinary and highly visual phenomenon, In Design International replicated the aesthetic through contrasting hard and soft finishes that mirror the coastal juxtapositions of a coastal environment that can be both soft and severe.

This naturally led the design team to a selection of taps and hardware from Phoenix Tapware. The Cerchio Sink Mixer, Vivid Slimline Oval Vessel mixer and Vivid Slimline Oval Basin Mixer have been used throughout The Sebel and the stainless steel finish complements both the harder materials such as marble, stone and tiles, as well as the plush carpet, soft textiles and blonde wooden floorboards.

This was also a unique job for the design team in that they needed to choose finishes and materials that would not only offer durability in terms of strength, but longevity in terms of aesthetics.

“For our hotel clients, they don’t want to be doing renovations for hard finishes every five years. They want to be able to have product that has a sense of timelessness,” says Keirah. “That was what really drew us to the Vivid Slimline range; it feels modern but at the same time the soft curves and the choice of chrome in this particular case gave it that timeless look.”

Contemporary elegance best describes the look and feel of the interiors at The Sebel, perfectly matching the client’s brief. In Design International were able to establish this so effortlessly with a strong spec sheet and more than one mention of Phoenix Tapware.

Inject Your Personality With Phoenix Tapware