How do artists use light as a .. 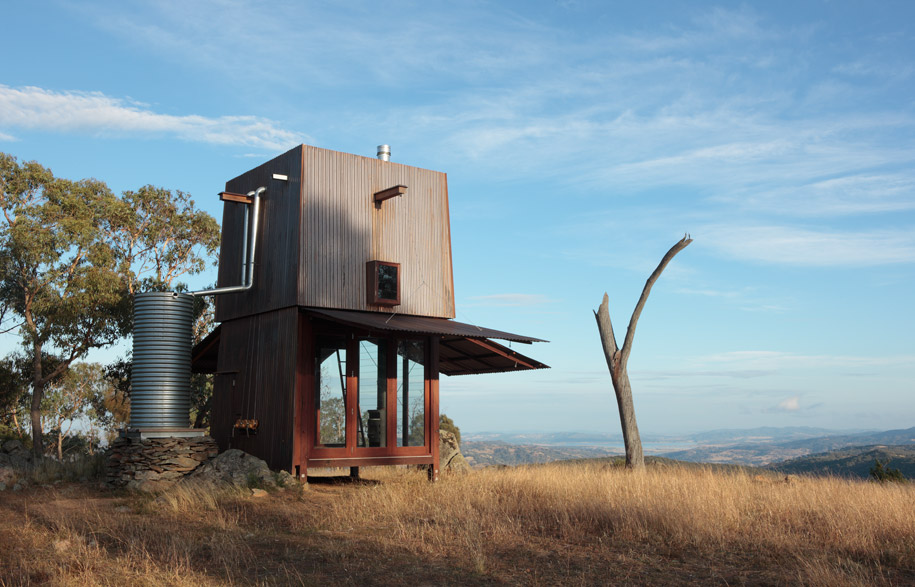 “The best of them were houses cast in the first person singular, each the precise material expression, in wood or canvas or aluminium or plastic or simple tar paper, of a single individual.”

Rob Brown’s hut near Mudgee is surrounded by bush. Lines of mountain ranges can be seen in the distance, and between them flashes of light from a distant reservoir, its appearance ever-changing with the sky. There is no sign of habitation anywhere. 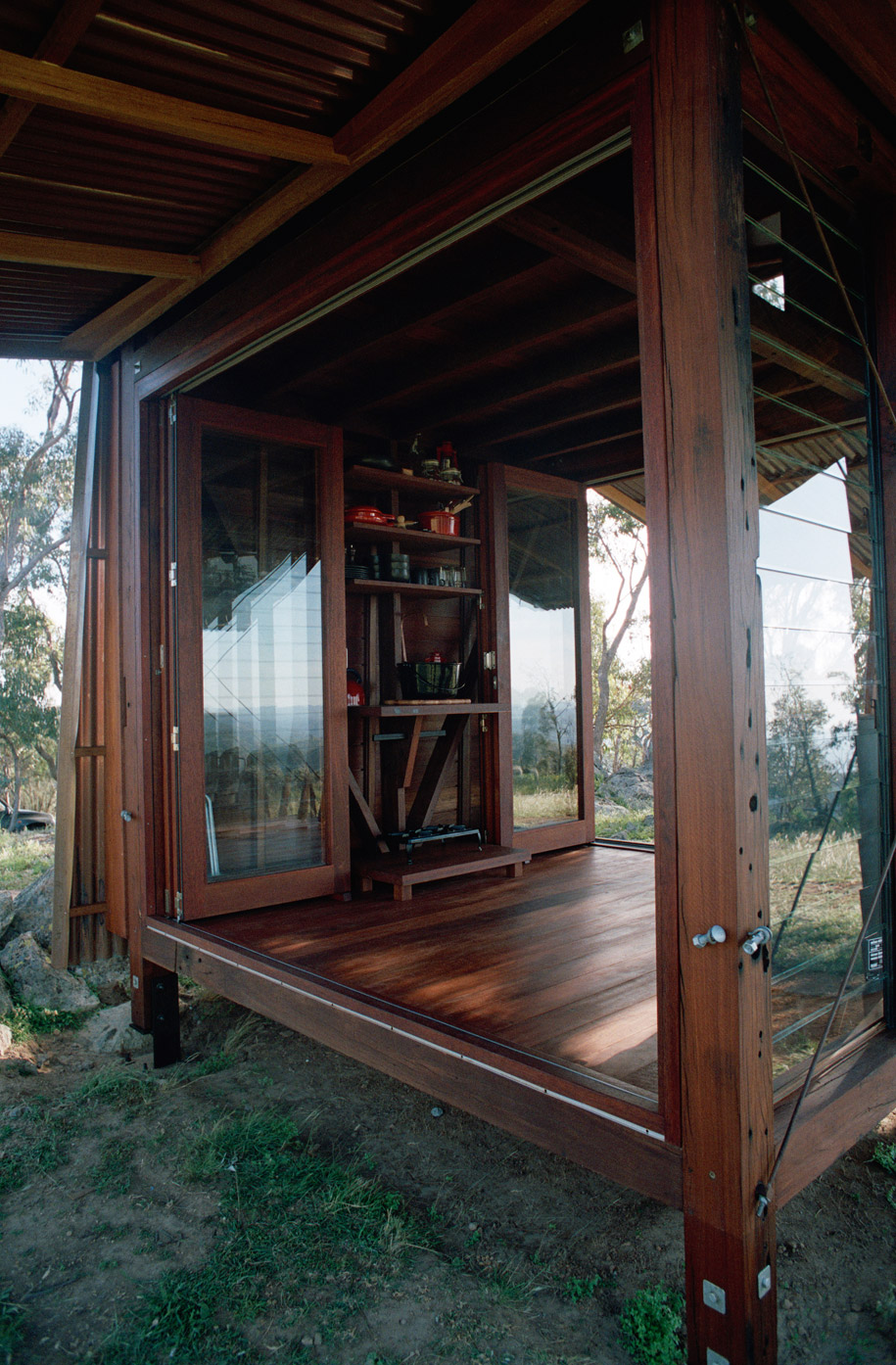 The hut is not, perhaps, something that everyone would wish for. But for this client, who grew up on a nearby property, it represents a poignant homecoming. As a child, it was a camp site he liked to visit on horseback, just to take in the surrounding bush and panorama. Here he revelled in the sense of distance and freedom on offer – the spaciousness of the mountains, something Gaston Bachelard referred to as “intimate immensity…Far from the immensities of land and sea, merely through memory, we can re-capture, by means of meditation, the resonances of this contemplation of grandeur.” 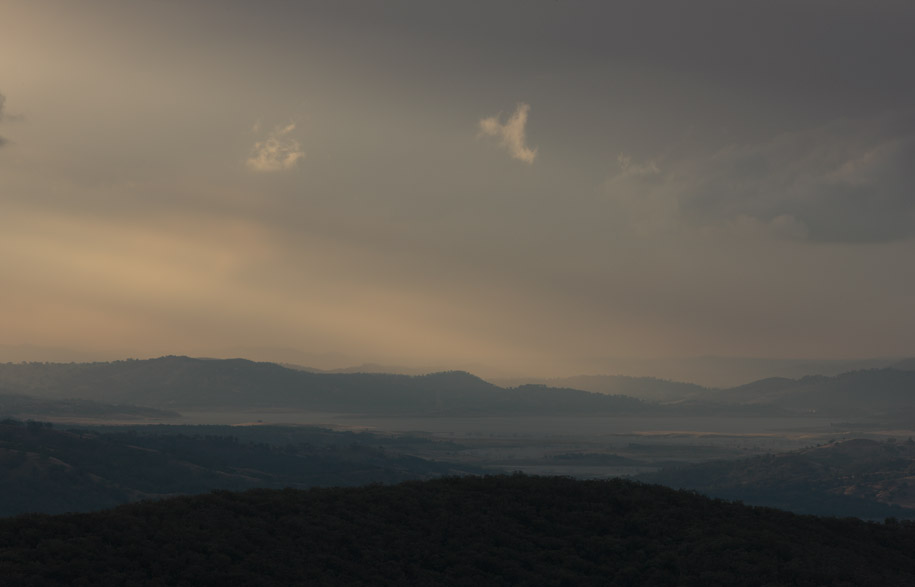 Such memories need to be refreshed after a while or they fade, and this was the point behind building the hut where it is: to provide a base camp to be returned to again and again to re-charge those memories.

Many years later, as an adult who worked in Sydney as a graphics designer, the client recalled the site as a place of reverie and managed to acquire it. Nothing happened easily – a lot of planning was required, materials had to be bought, and, since no builder could be found to do the work on the site, the modest 3 x 3 metre hut had to be pre-fabricated and trial-erected beforehand to achieve the goal of permanently camping in his daydream hut in the wilderness. 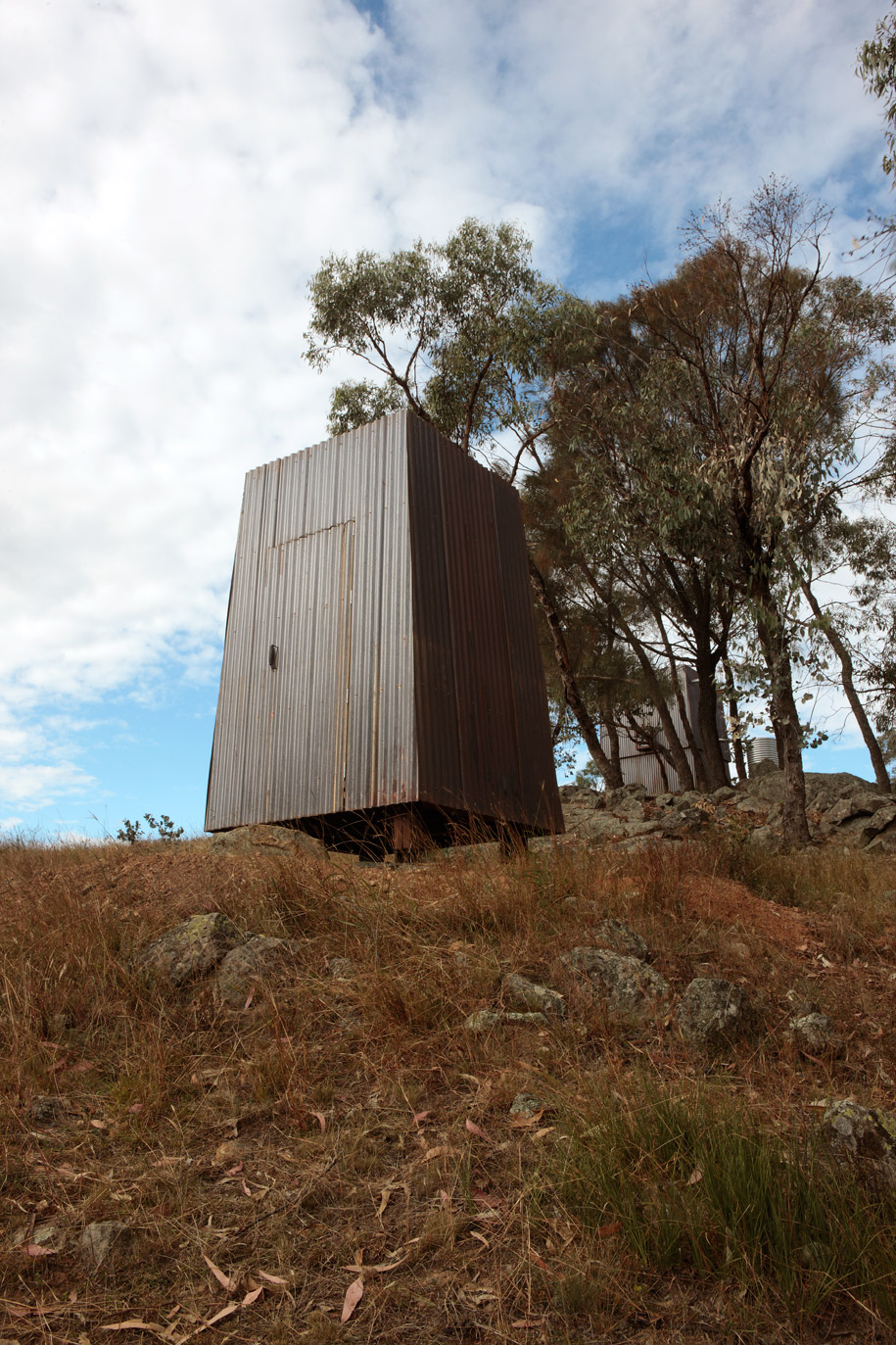 The Mudgee hut was necessarily the work of several individuals nd the builder (Jeff Broadfield), the client, and the architect (Robert Brown) and his staff, worked in unison. 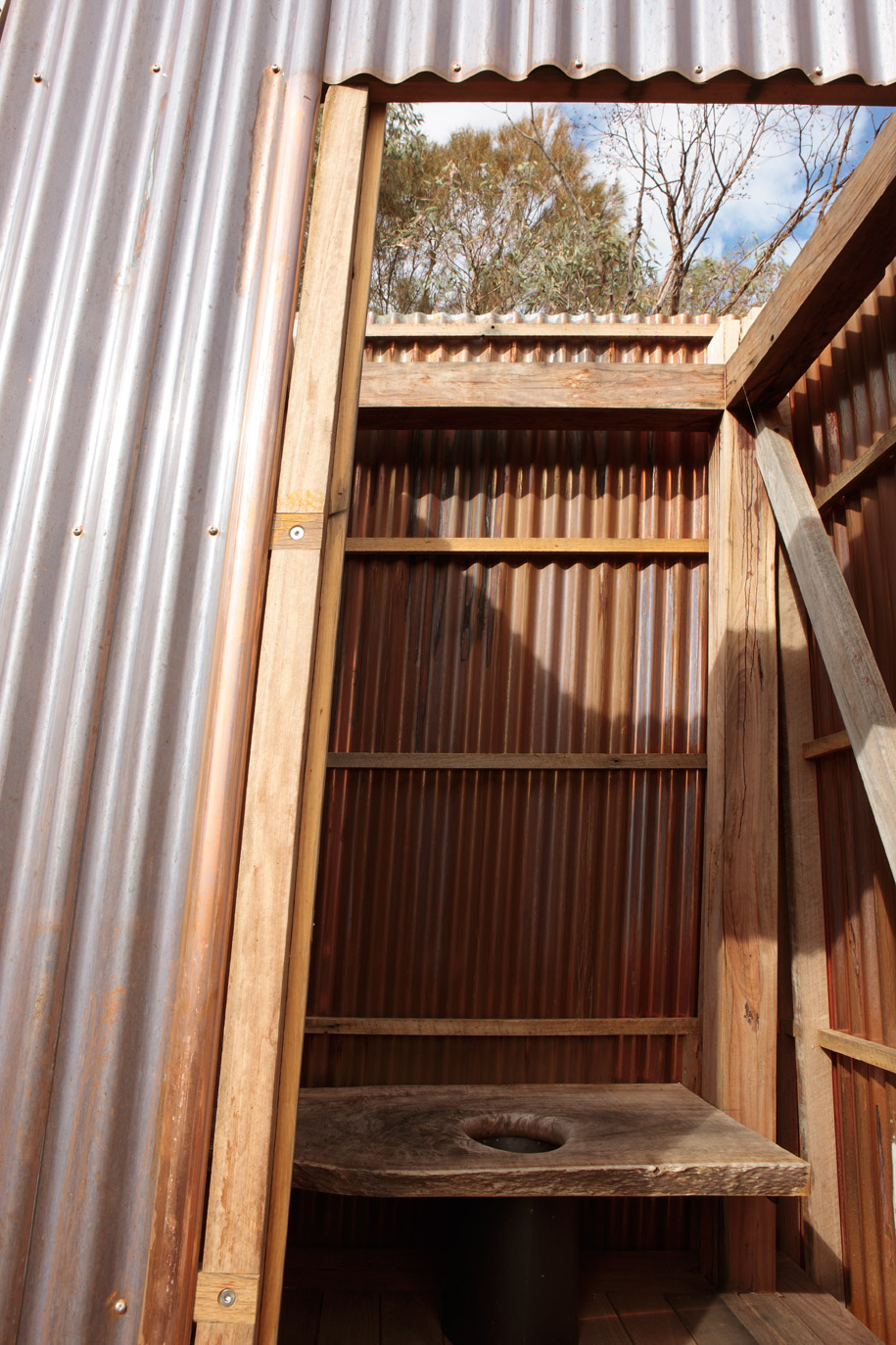 A place to daydeam! In 1958, Gaston Bachelard, suggested: “If I were to name the chief benefit of the house, I should say: the house shelters daydreaming, the house protects the dreamer, the house allows one to dream in peace…the house is one of the greatest powers of integration for the thoughts and memories of mankind.” There can be no better description of the hut.

The site occupies a long finger which widens towards its end into a flat which is surrounded by a crescent of trees on its south. Irregular rocks jut out of the ground and the skeletons of ringbarked Iron Barks stand guard over the hut. It suggests a bushranger’s hide-out. However, it is really contemporary – less a refuge from the law than a retreat from the city, from civilisation, from today’s tensions and anxieties.

It is a location that draws people to it. In tourist parlance it would be described as a ‘lookout’ or ‘viewing point’. 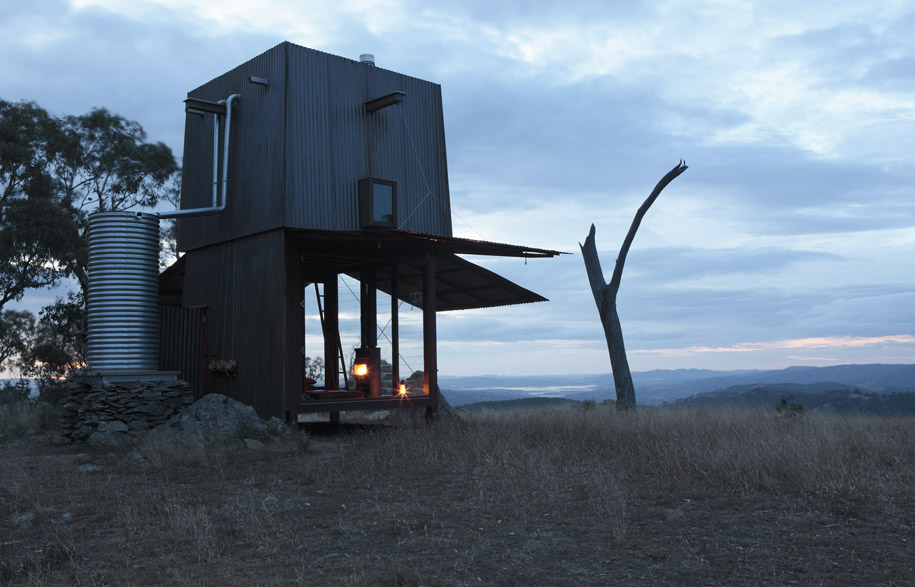 Cold in winter and at night time, hot in summer, the land is harsh. It has its own beauty, a certain rugged toughness and intense isolation. It asks a lot of anyone who would stay here.

Our story begins in 2004 when the client started collecting the corrugated copper sheeting to clad the outside – a wise move considering the high price of copper these days! Next came the Iron Bark timber for the frame. It all had to be pre-fabricated in Sydney. That meant the frame had first to be fabricated, all the joints pre-cut to eliminate site work as much as possible, and when all the parts were ready, the hut was trial-erected by the builder at his Mona Vale workshop to make sure everything fitted together as it should. No steel was used or nails. Instead, all the joints were pre-cut in the same way as a traditional Japanese carpentry house. 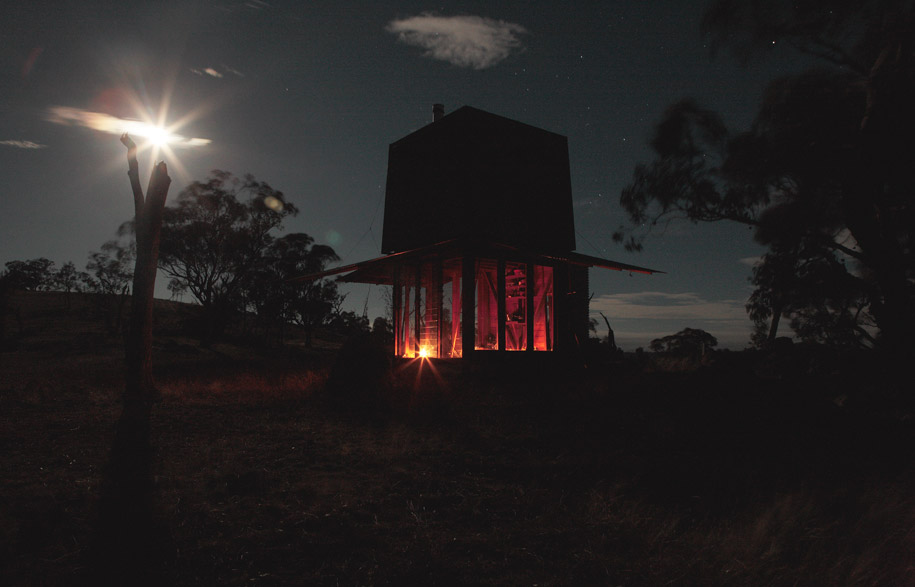 The hut and toilet components were delivered by truck, then the main Iron Bark framework was erected. First, the parts were laid out on the ground. Then, since everything had been done beforehand, the actual work of assembly and fixing happened remarkably quickly – much as it does when erecting a tent. The lower frame went up first. After this, the upper loft section was dropped into position. This took a day or so; another day was required to fix the copper cladding

For coolness, the wall construction is complicated: a series of air gaps behind the copper to allow heat to rise and escape at the top, and behind this is building paper, insulation, plywood. 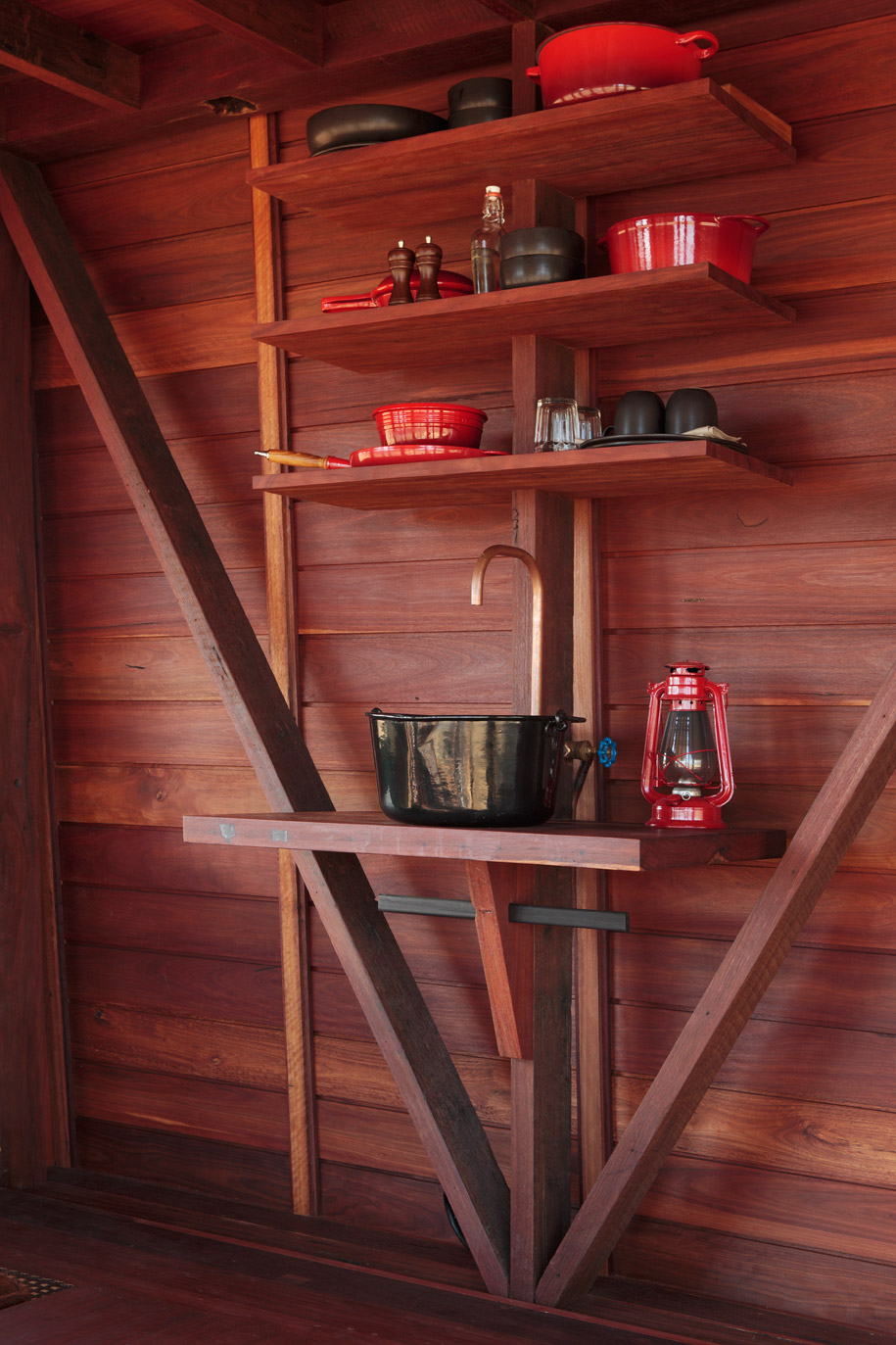 On three sides, the downstairs walls are hinged at their top so they open out like a flower spreading its petals in the morning sun. They can be lowered to close up the hut at night. During the day they enlarge it by creating temporary verandas.

The deck living area has elementary cooking and washing facilities. Above this, warmed by rising hot air, is an enclosed sleeping-loft with three small windows. Along the back wall the kitchen is provided with four shelves, a tap connected to the water tank at the back, a removable sink which can be replaced by a gas cooker supplied by a bottle under the water tank. 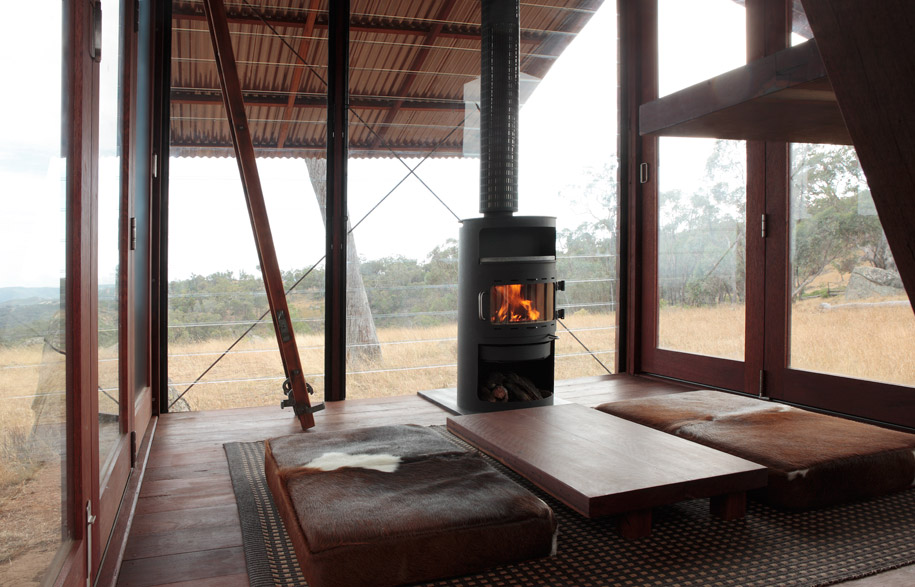 The two storey hut has a smaller, matching offspring down the slope – a real masterpiece! The long-drop toilet behind the main hut is down the hill and has just three walls and a door opening on to truly spectacular views. Inside, there is just a wide, single piece of hardwood for a seat with a carved hole. Without a roof it becomes a toilet-under-the-stars. It can be a bit wet inside when it rains, but the gain is the skylight of so many stars.

The entire thing is a mixture: part Egyptian (ancient), part flower, and part Ned Kelly. Egyptian because the copper walls slope inwards at 3º so they vent upwards; flower because three of the copper lower walls are hinged with ropes attached to pulleys from three beams to raise them (when raised they form outstretched veranda panels); and Ned Kelly, because when the petals of the flower are closed up, the hut strikingly recalls Sydney Nolan’s stylised Ned Kelly helmet. 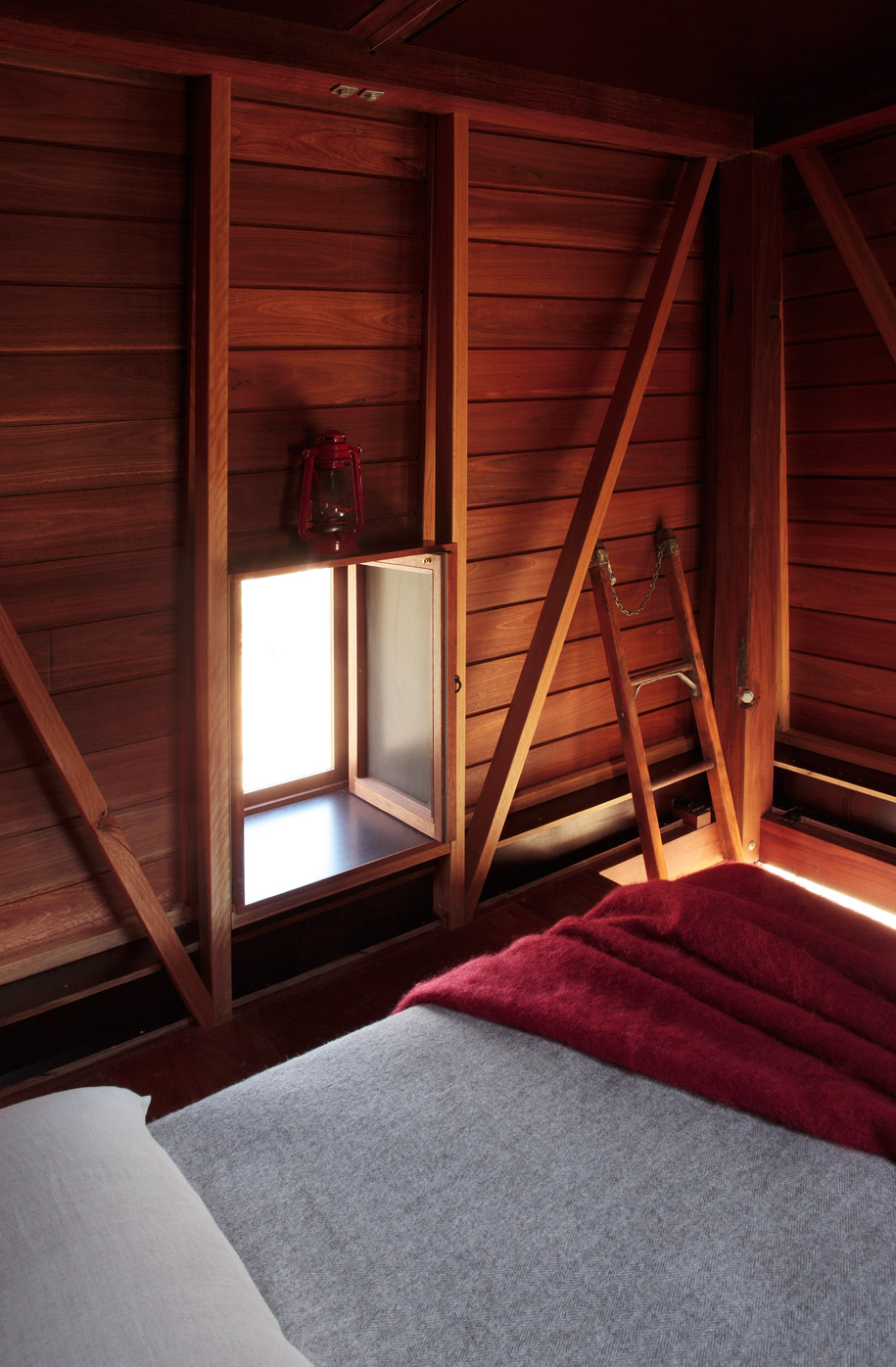 The colour at present is a soft pink that in time will melt into the bush as it acquires its characteristic green patina. But for the moment, it adds a touch of warmth that is almost human and contrasts with the black aggressiveness of the Ned Kelly image.

As a designer, the client approved the irony of the hut shape – a structure armoured against and in keeping with the harshness surrounding it.

The hut has much in common with a tent: the process of prefabricating the parts, trial erection, transport, and final erection on site repeat the same sequences as a tent. Where the hut differs is that it is not intended to be repeatedly erected or re-located, it is not truly movable. You might say it was a permanent camp site, or ‘batch’ the New Zealand term for this sort of thing. 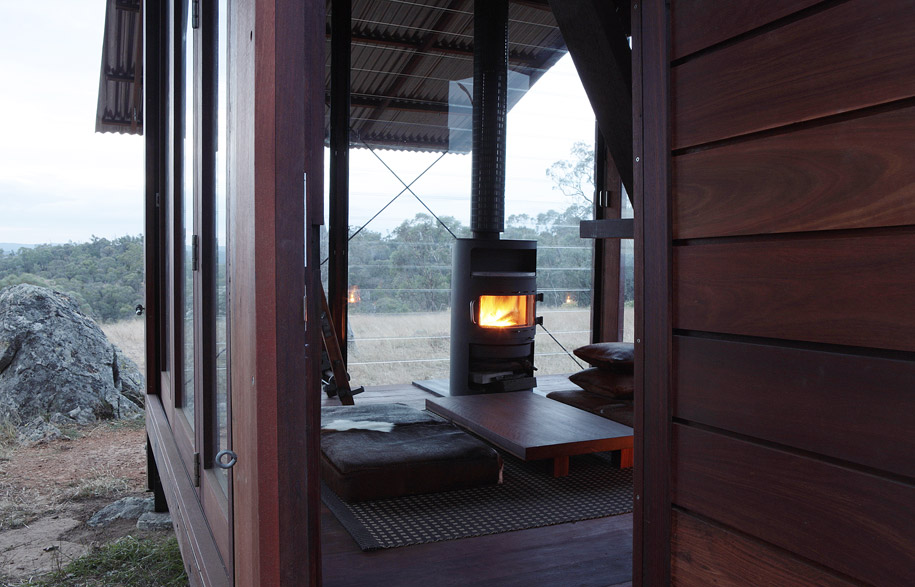 This hut represented a one-in-a-lifetime opportunity for Rob Brown to, “chisel back to the essence of life. Wonderful to experience it, then to be involved in its building, added a further layer to the experience.” It also responds to Henry David Thoreau’s plea to “simplify, simplify, simplify”.

Many very Australian things are gathered up in the hut, but much is below the surface – subliminal. It might seem slightly ridiculous, but in these days of rising home interest rates and families struggling to hang on to the family home, it suggests many applications as a shelter just a few steps up from a tent. It could serve as a shelter in a rainforest or desert, and a collection of similar scattered huts forming a village.

It is also the quintessential Australian shelter – the bushranger’s hide-out. It looks defensive, yet in true frontier fashion, its space is centrifugal and unfolds outwards, spreading itself into the landscape. And for all its seeming simplicity, it is anything but. 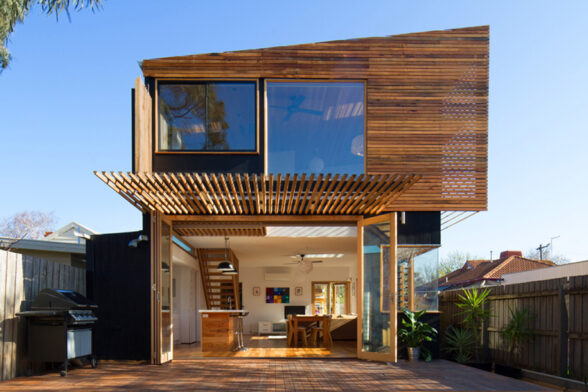 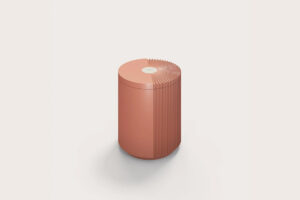 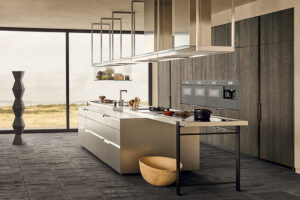 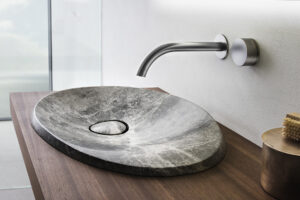