INDE.Awards Mixer – A Night To.. 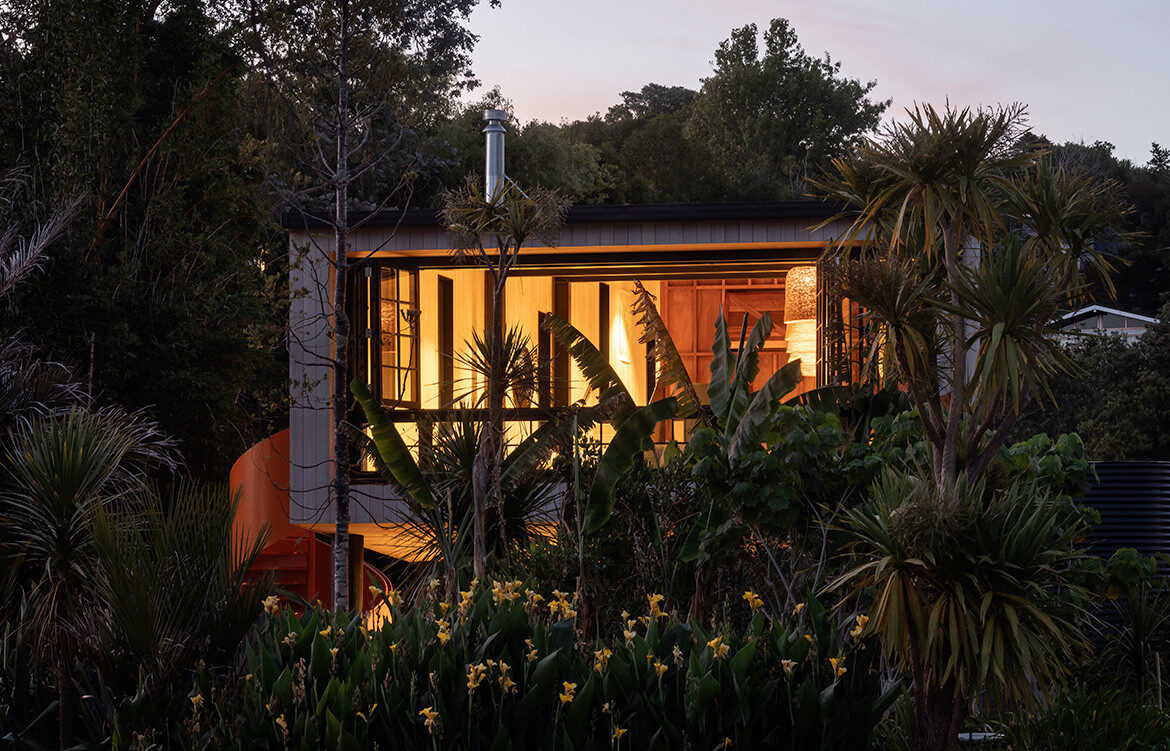 Given its beachfront location, designing for climate resilience and rain events was top of mind for this architect’s family bach.

Tāwharanui is a rural area north of Auckland renowned for its wildlife sanctuary and marine reserve. The indented coastline of small bays and headlands cradles parks, campgrounds and baches of quintessential NZ bach design, attracting people from Auckland and Warkworth for weekends and holiday stays.

Located in the horseshoe-shaped Kawau Bay, the site for this holiday bach is positioned only 20 metres from the high-tide mark and two to five metres above sea level. Many people would shy away from the proposition, especially with the added complication of an overland flow path through the site. But architect Rich Naish of RTA Studio has embraced its challenges and built his family bach in the form of a ‘boathouse’ on poles to deal with both the ephemeral stream and potential coastal erosion.

“The beauty of it is also the danger of it, which is what was really interesting about the project,” says Rich. “Whatever we did, we couldn’t rely on a dry or fixed ground plane. Climate will challenge its occupation, so we approached it as an experimental project to create a resilient structure that could be inhabited for generations to come.”

Building responsibly in the bay not only required consideration of weather events, but also the visual impact of a new building close to the shoreline. The boatshed typology offered an answer to both.

Raised above the site by three metres at the highest point, timber piles extend 12 metres into the ground, so that while the coastal environment below the house may alter, the living space is lifted safely above. But it is certainly no ordinary boatshed, with apparently simple white-washed cedar siding wrapping a dynamic geometric form.

Approximately three metres wide and seven metres tall at the landside, and seven- metres wide and three metres tall at the seaside, the building shapeshifts from a rectangle on its end to a rectangle on its side. From the verticality of bush to the horizontality of the sea, construction lines converge in section and diverge in plan to frame the ocean. The sculptural shape creates a fun and energetic interior, while still managing to look fairly conventional from the outside.

“It’s probably the first new house to be built in the bay for more than 30 years,” says Rich, “So we wanted it to feel in keeping with the style and scale of the old baches.” As seen from the sea, the front elevation could be mistaken for one of the original houses. Screened by Pohutukawa trees and featuring small windowpanes – not the usual frameless glass of contemporary architecture – it feels almost vernacular. ‘Almost’ because its geometric playfulness is unmistakeable.

Climate will challenge its occupation, so we approached it as an experimental project to create a resilient structure that could be inhabited for generations to come.”

Access to the interior from the driveway is via a roller door and into an actual boat garage. To the left, a ramp rises gently through the full length of the house. Partway up, there is a door to a bedroom and bathroom before the ramp reaches its destination inside a double-height living space on the midfloor.

Instead of the ubiquitous external deck, a set of large bi-folding windows and a deep overhang create a similar effect but bring the ‘deck’ space inside. Its elevation above both the beach in front and public reserve along one side provides a degree of privacy and creates the effect on being up in the tree canopy.

Materials and details are raw and unpretentious, detailed in familiar, low-tech timber construction. Band-sawn pine planks line the walls and ceiling, oiled cedar plywood and battens add a deeper colour on the back wall, and built-in seating maximises the use of space. The architect has avoided custom details to create a casual and relaxed atmosphere, with the only obvious ‘city’ elements being the plate steel balustrade and kitset steel kitchen by IMO.

At the back of this large shared space is a short flight of stairs to the top floor (stacked above the bedroom and bathroom below), which contains two bedrooms and a multi-use room. The main bedroom features two hatches to overlook the living room and out to sea, while the third bedroom faces westward towards the valley and is characterised by the vertical proportions of the landside elevation.

Nautical themes can be spotted in the slot windows down both side elevations – like an ocean liner – and in the external spiral stair painted bright orange like a buoy. “I saw the house as part boat and part shed, as well as a boatshed,” says Rich. So these elements create a tongue-in-cheek analogy with a beached vessel.

Sustainability calculations show the home is embodied carbon zero. With only a few steel connections and foundation concrete, the house is mostly timber. The site has rainwater tanks, on-site stormwater and septic tanks, and exotic landscape species have been replaced with 400 native plants and trees.

“It’s an experimental and very personal house in a lot of ways,” says Rich. “Not just in terms of climate change and carbon zero, but also in terms of doing something that I don’t usually have the opportunity to do for clients; to push the boundaries formally, functionally and environmentally, while finding a responsible way to occupy the site.”

Nautical themes can be spotted in the slot windows down both side elevations – like an ocean liner – and in the external spiral stair painted bright orange like a buoy.