Have you Designed the Kitchen ..

Living together, high and low 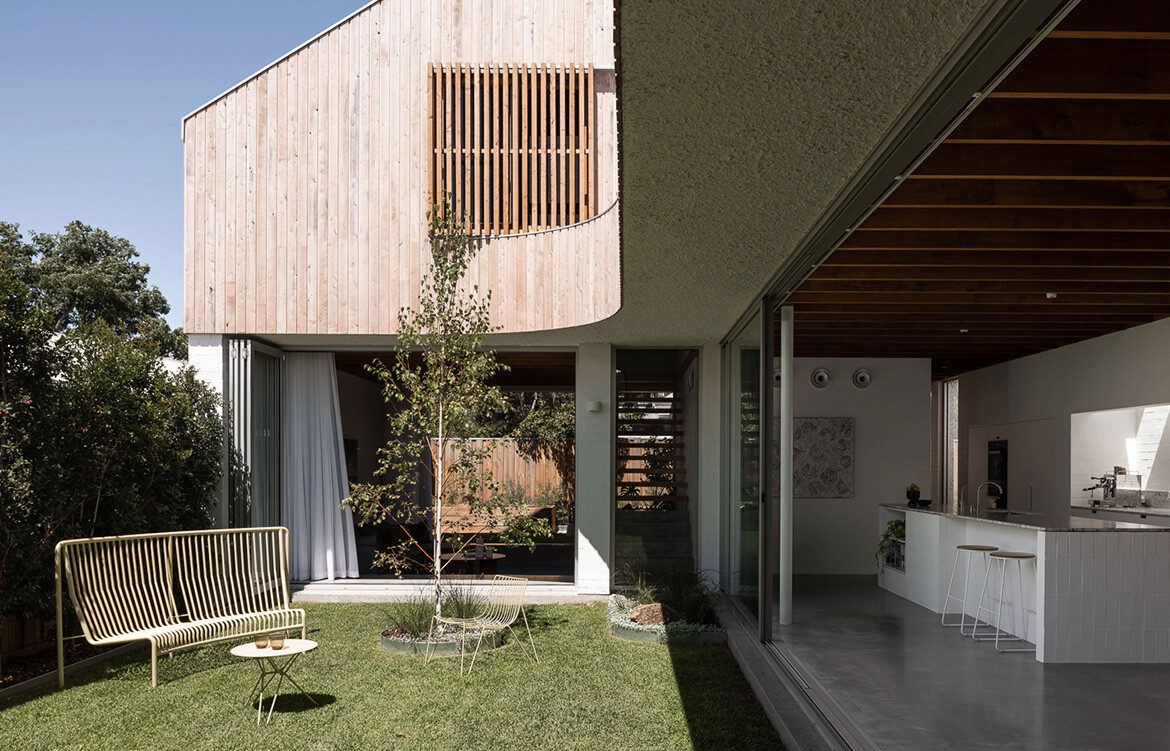 An interstitial entry chamber with a definitive mood gives way to an expansive ‘garden room’ in Nic Brunsdon’s artful addition to this heritage cottage in East Fremantle, Perth.

“Dark, hard and solemn,” is how architect Nic Brunsdon aptly describes first impressions upon entering East Fremantle House, his latest residential alts&ads project, in Western Australia. The house beyond that, however, is quite the opposite — light, bright and open.

Seeking a contextually sensitive addition to a cherished existing cottage to accommodate contemporary living, the clients’ had come to Nic with a relatively liberal brief. In his artful response, the architect’s extension takes on an unconventional expression and resolves in a residence that looks and feels wholly refreshed.

All in all, the enhanced programme consists of four core volumes and begins in the middle. Accessed via the side and halfway down the site the chamber-like entry space—Nic’s atmospheric intervention of where old meets new—becomes a new right of passage for residents and visitors of East Fremantle House. Encompassed in dark masonry and unadorned, occupying space enough for a study nook and bike storage, the entry link is sombre and still, with two paths to choose from — excluding the one in/out.

To the left of entry leads to the existing brick cottage, facing back to the street, which has been restored and lightly amended. Alternatively, a turn to the right opens out to the new addition. Simple and linear, this volume of the building forms an efficient living space conceptualised as one long ‘garden room’. Light, bright, and open, it is experientially a direct counter to the experience of the house upon entry. A wooden box with articulated eaves is perched lightly above the masonry ground floor addition to house a bedroom suite.

“The most important part of this house is the space that is not built,” says Nic, referring specifically to a large northern void he left alfresco in the extension of East Fremantle House. Inhabited freely by sun, light, sky, fresh air and sound, the open space is traced around the south, east and west edges by Nic’s built addition to the site, resulting in a series of rooms that boast an immediate connection to their elemental surrounds and inherently optimised for thermal efficiency.

“This practice’s view of sustainability is that it is best done as a first principles thing and not an applied technology,” says Nic. “Getting the massing, orientation and subsequent program planning right is the most important thing we can do as designers of lived environments. More so than ever in our current context of shifting work patterns towards the home.”

East Fremantle House is open and ready to handle more of life’s inevitable change too. Currently, a recent birth has the family residing in the private spaces of the original cottage, while the new bedroom suite above the living extension is a spare, ready and waiting for guests to stay; or for when either the parents or children choose to retreat to the privacy of the rear suite.

Through his addition to East Fremantle House, Nic Brunsdon has designed a house that is as atmospheric as it is dexterous. Imbued with all the high-performance elements of sustainable space planning, the program optimises thermal mass, passive solar, and prevailing breezes. The resulting house is breathable, functional, responsive and experientially unforgettable.

I Spy A Hidden House

Stiletto House Is Fluent In The Future Of Form