Morning After Cafe: The Antith..

#MyHabitus : Our Month Of Give.. 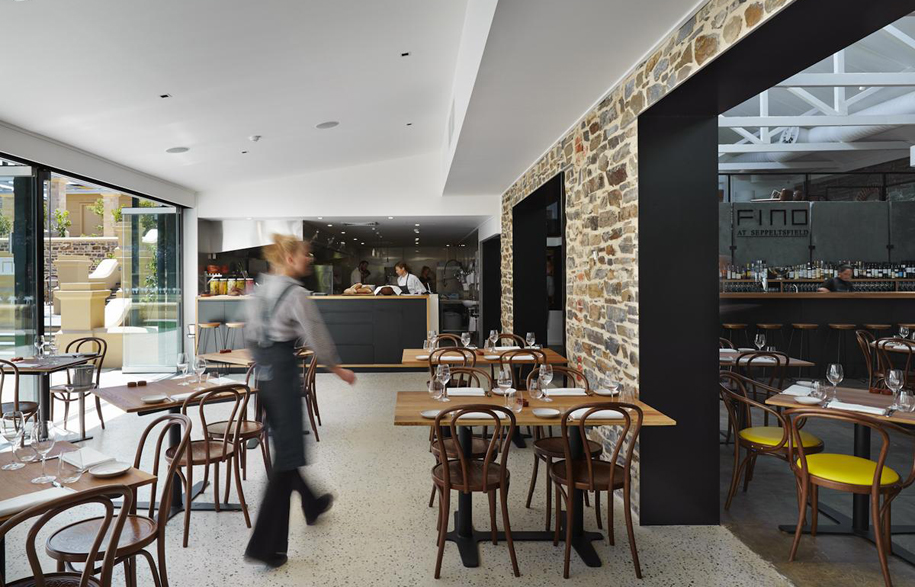 Seppeltsfield estate in South Australia’s Barossa Valley has undergone a major redevelopment within the past three years. Renovations include the addition of a JamFactory satellite venue, comprising gallery, studios and retail outlet, and have culminated with the recent opening of the historic winery’s revamped cellar door and Fino Seppeltsfield restaurant.

While the brief for these two recent works called for the integration of food and wine, the restaurant itself wasn’t part of the initial scheme. Architect Max Pritchard was already planning the cellar door long before Seppeltsfield persuaded the highly respected regional eatery’s owners to come on board. When they did, however, there was no question as to whether both venues would be accommodated under the same roof.

“It was a design decision to place them together in the estate’s old bottling hall and have them be very visible to each other,” says Pritchard. “Although people aren’t encouraged to walk between them.” Patrons walk around because a long, low fireplace clad in slate reclaimed from elsewhere on the property acts as a barrier, zoning each area. It’s a discreet, yet effective, intervention that reflects Pritchard’s respectful approach to the building’s adaptive re-use.

Unsurprisingly, the hall is heritage listed, but rather than impede the design process, this worked in its favour. As Pritchard explains, “We wanted to get the most out of the structure, so we were actually stripping away things that had been done to the building over the past 100 or so years to try and get it back to its original state.” He certainly had good bones to work with and rightfully made key features of the existing lantern roof, which provides an abundance of natural light, white trusses and a corrugated iron ceiling that lend an instantly appealing industrial aesthetic and strongly textured stone walls.

Revealing the original concrete floors further adds to the space’s rich material palette, while also highlighting the site’s history through its patina. The only challenge was in trying to configure the cellar door to accommodate large numbers of visitors at any one time. Pritchard’s solution was to install a series of freestanding circular oak pods – with a generous circulation path between them and the walls – that reduce the congestion standing around a long counter often causes.

The minimalist concept is echoed in the restaurant, where the uncluttered fit-out is offered elegant restraint with Thonet chairs and JamFactory-designed dining tables. These key furniture pieces are complimented by the oak joinery, which, along with the reclaimed slate walls at either end of the interior, unifies the overall design.

While still in keeping with the scheme’s simplicity, the restaurant’s intimate dining area, in the former vat room, injects visual dynamism. “We weren’t trying to tidy things up; we bashed out openings and left them really raw”, Pritchard says. The effect, along with ambient lighting, is unapologetically rustic and the reveal succeeds in connecting patrons with the site’s heritage.