Architect Jon Clements took time out to speak with us this week about why their Henley Street design held such significance, in the sea-changing town of Barwon Heads, Victoria. The residential project of Henley Street, Barwon Heads is a 370 square metre family home in the small coastal town of Barwon Heads, Victoria. “Our clients really consisted of ‘The Hippy’ and ‘The Yuppy’; a couple madly in love with each other with three young children and an open brief,” says Jon Clements, Lead Architect on the project.
“They asked for a new two-storey house on the expansive site, that could be their permanent residence. Their requests extended to a “green” house that would appropriately contribute to the townships evolving contemporary character and include a planetarium,” Clements explains. Beyond the owner’s interest in designing their dream home, Clements says the design of Henley Street project also held import in the small town’s changing streetscape.
“Barwon Heads is in a period of significant change. Heritage overlays currently protect older fishing shacks, whilst the less significant fabric of the seaside town is progressively being re-developed. Architecture right now is significantly contributing to the evolution of this small coastal township,” he continues.
“Wanted or not, fame was brought upon the township in the past decade as a result of ABC’s TV series Sea Change. Now both the town and its eclectic personalities have been divided into morphing factions forever debating the merits associated with progress or change. “The rise and rise of Architecture is met with a similar resistance in Barwon Heads. Many are opinionated about its impact on the changing face of the town and it’s with some hesitation that clients take on contemporary architectural projects, fearing an uprising of community resistance that might lead to being ‘burnt on the cross," Clements says.
While this may sound odd to city-folk, in a small coastal town where most people know each other by sight, Clements says his firm were keen to help their clients take sensitive approach while challenging narrow-minded local views at the same time. “In our case the young family engaged us to design a new permanent residence which would replace a dilapidated 1950’s two storey house that was beyond repair. Our clients were locals rather than recent “sea-changers and they were totally committed to challenging the dark force behind the somewhat seasonally influenced ‘Silver Haired Resistance’.
“In response to this half-joked demand (for a planetarium), we immediately engaged in the exploration of circular forms as a loose reference to the traditional star-gazer. The brief was challenged by the inherent constraints of the pure circle, and so the design concepts eventually evolved to become a series of sprawling spaces nestled under a primarily circular form,” Clements says. The sculptural form of the final building appears to have emerged as part landscape, part streetscape. The front fence competes with the boundary condition, folding and thrusting itself back onto the site to become part of the skin, wrapping the building in a protective layer and then returning to ground to re-engage with the rear fence. The battened skin actually provides important solar protection to glazed windows and provides necessary privacy to spaces in the upper form. Further ESD strategies include the use of solar hot water systems, solar pool heating, rainwater retention and harvesting for toilet, garden and washing machine use. High performance double-glazing is installed in the home as well as under floor heating. Air-conditioning systems were not required on the basis that the house achieved a 7.5 star energy rating.
Henley Street Barwon Heads was completed in 2009. The design took six month and the construction 2 years.
View more projects by JCBA.
All photography by John Gollings. 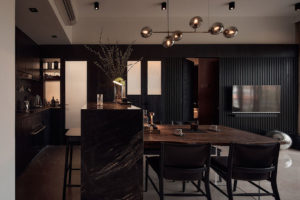 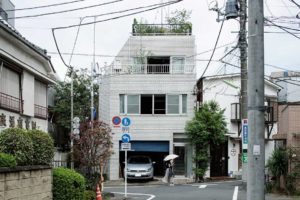