The Elemental Fixtures For An .. 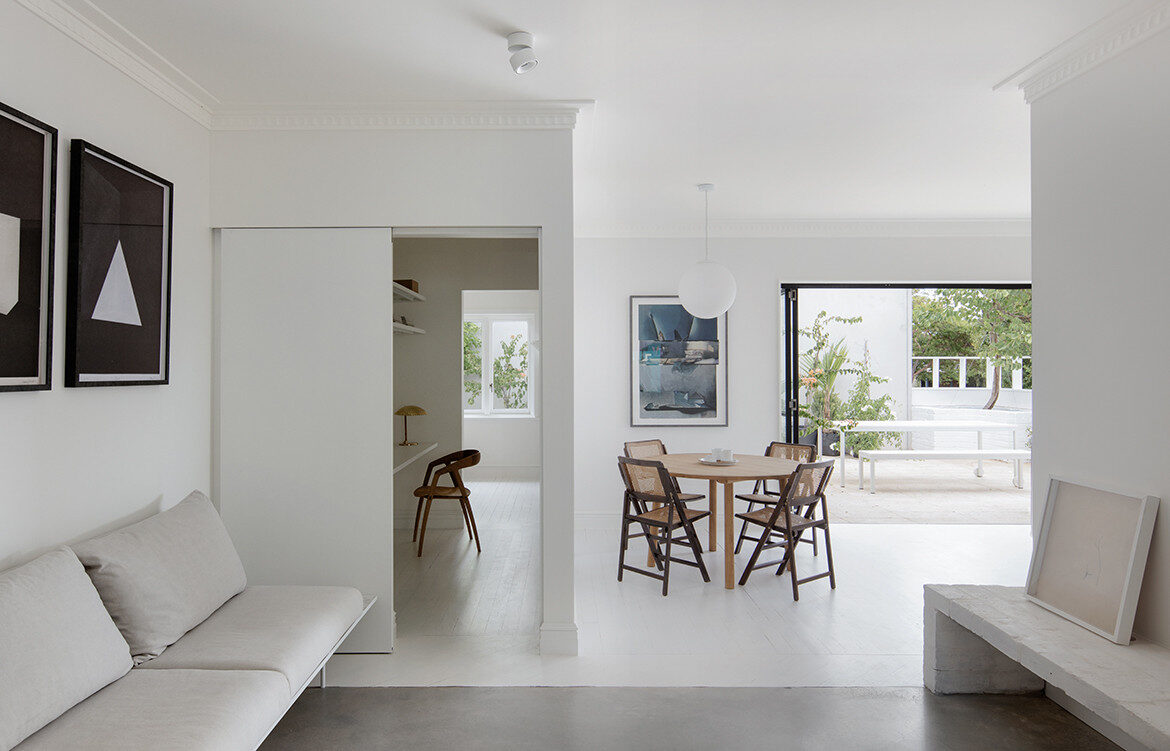 Part urban infill and part urban heritage protection, this renovation and extension is the second stage of an innovative sub-division project in Perth.

Kate Fitzgerald, founder of the boutique architectural practice, Whispering Smith, and her partner, Matthew Johnston, garnered national attention in 2017 with their imaginative House A in Perth’s seaside suburb of Scarborough. On what Kate describes as a “micro-lot” – a plot of 110 square metres and house area of just 70 square metres – one part of a tripartite sub-division, they put the case for a more liveable and sustainable densification of the suburbs. Now the house is being used by the state government as an exemplar as it develops a new medium density code.

House B is the second stage of the project and is, says Kate, “about carving out an existing piece of built and landscape heritage on the site and protecting it while maintaining a piece of remaining suburban Scarborough”.

House A is being used by the state government as an exemplar as it develops a new medium density code.

Little remains of the old Scarborough, with the “cute” red brick bungalows which characterised the suburb “bowled over for beige McMansions”. This part of the sub-division was an 850 square-metre-plot “with a tiny post-War house right in the middle and a concrete pathway to a Hills Hoist on the front lawn”. The house itself was a two-bedroom shell in poor condition, but the sloping site offered fine views down towards the sea, sea breezes and an Empress tree and a Point Cook Pine.

This prompts Kate to refer to the City of Stirling survey into tree canopy loss. “They have lost 75 trees a week over the past 20 odd years,” Kate relates. “You can imagine what that’s done to the landscape. At the current rate, they say, in the next ten years 50 per cent of what’s left will be gone. So we are talking about a massive decimation of the character of Scarborough, a beachside suburb.”

And this highlights one of the key drivers of House B – sub-division requirements which have led to the loss of trees in order to meet mandated car parking space. The solution here was to build above a garage providing car parking for both House A and B, the roof of which is now a travertined terrace leading off the living space of the new extension. The tactic also enabled extra green space around the two heritage trees.

One of the key drivers of House B was sub-division requirements which have led to the loss of trees in order to meet mandated car parking space.

Inside, Whispering Smith “re-jigged” the existing bedrooms and created a third small multi-function sunroom at the front of the old house, all enjoying northern sunlight. An arched corridor now connects the western and eastern sides of the house, leading to the rear garden area. Off this central fireplace was removed to open up the interior of what is now the new part of the house. This is a largely free-plan space consisting of living/dining/kitchen leading out to the elevated terrace. A new east-facing master bedroom leads off from this space along with service and wet areas.

Overall, it is a neat and inventive piece of planning. It optimises the amount of light in the house, provides a surprising amount of green space – indeed a surprising sense of space altogether, given the actual size of the project.

While House B continues the urban infill agenda of House A, it is more about preserving cultural heritage. Unlike House A, which Kate says deliberately did not respond to that context, House B is an exercise in what Kate calls “considered density”. It is, she says, about “keeping the spirit or identity of the place intact and showing consideration and respect for what’s there”.