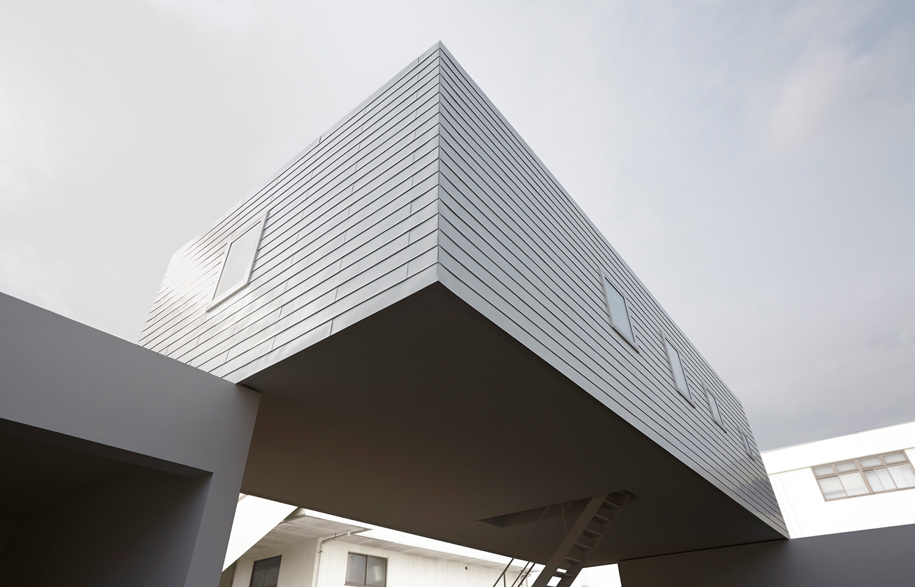 What looks like a set of building blocks piled up to the brink of collapsing, Nagasawa Dental Clinic in Tokyo, Japan blurs the boundaries between misapprehension and illusion.

Nagasawa Dental Clinic was recently built in the residential suburb of Hachioji in western Tokyo, Japan. The build incorporates a dental clinic and a residential home, a garage for two cars and a parking lot that holds space for seven patients’ cars.

Far from the standard concept of two-story buildings, the two structures retain an atmosphere of traditional Japanese architecture while displaying a clear modern vernacular characterised by its unique structural presence – the two structures look like they will topple over with the first breath of wind.

Thanks to the Nagasawa Dental Clinic’s clever design and use of space, the site is spacious enough to accommodate its unique requirements while providing a comfortable working and living environment for those interacting with both structures.

Emphasising the presence of the two structures, one end of the house barely sits on the edge of the garage and the other end appears to hover on the edge of the dental clinic. Without diminishing the dental clinic’s presence in the neighbourhood, it has been placed away from the front of the site to make way for vehicle ingress. Access to the garage and parking lot is via the main road, and has been placed at the front of clinic to increase ease of usability and flow of traffic.

The rectangular space of the dental clinic has been divided into several separate spaces and each has been allocated features such as waiting lounges, consultation rooms, hallways and facility rooms. A living and dining room, kitchen, bathroom have been arranged on the northern side of the residence, with a staircase located at its centre and a bedroom and other rooms on the southern side.

Indirect lighting has been used for both the inside and outside of the buildings, resulting in soft, linear rays of light upon the surfaces of both inside and outside walls. Upward-facing linear LED lighting apparatuses have been installed on the external wall of the dental clinic, and linear cornice lighting apparatuses have been employed for the waiting lounges and the living room of the house.