This elegantly simple house by Popov Bass Architects combines connection and separation to provide an ideal family home on a stunning Sydney harbourside site. Paul McGillick discovers a fully integrated fit-out where the architects have also designed and specified the interior furnishings and finishes.

Above: Seen from the rear, the simple assembly of four concrete walls and the metal vaulted roof becomes clear. Photo: Kraig Carlstrom.

The brief, says Project Architect, Aya Maceda, was for an “urban retreat”. In other words, perfect for architect, Alex Popov, whose practice specialises in taking advantage of stunning vistas that his native Sydney provides, while creating a private refuge from urban stress.

Client, Deirdre Huntley, says that she and her husband had followed Popov’s work for years in magazines and admired it for being “simple and elegant”. Initially, they approached him to design a home to replace their existing house in Cammeray where Popov had designed his outstanding residential complex, ‘Canopy’. But they then discovered a block of land in Mosman at the end of a cul-de-sac, on a ridge with panoramic views across Middle Harbour to the Heads – and, says Deirdre, “it all changed”.

There was no specific brief, just a general programme which included an extended entertainment area with two adjacent living spaces in a big open plan. 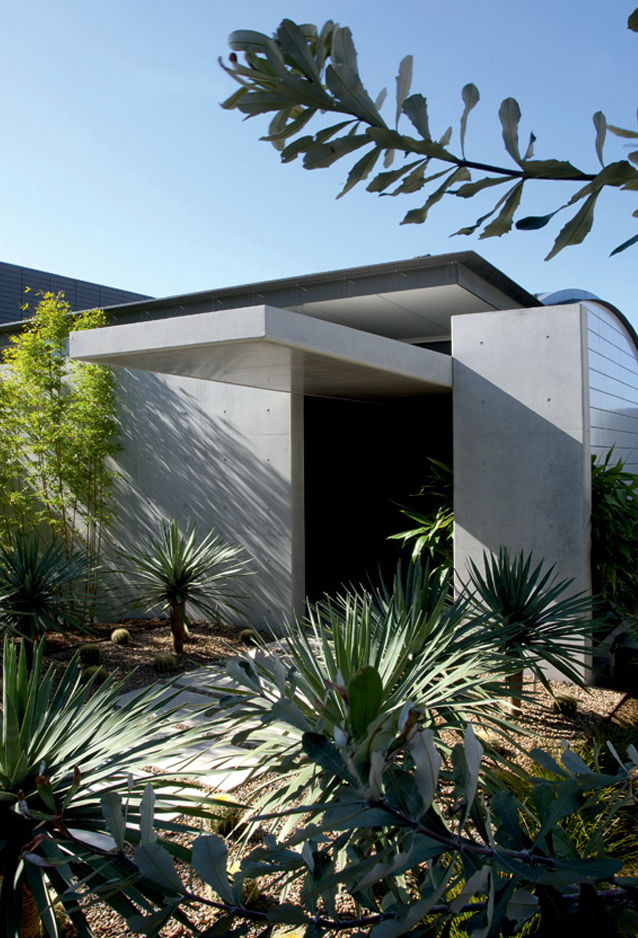 Popov’s houses invariably have a deeply meditative spirit. So, it is not surprising that over time his buildings have become progressively more simple – assemblies from a tool kit of basic parts, but finished exquisitely within a fine but limited palette and organised into a contemplative flow of spaces.

This house in Mosman is typical. It is typical also in the way Popov manages the transition from the public to the private domains, from the noise and activity of social living to the silence and stillness of domestic life.

Sited below the ridgeline, on approach, the house is largely invisible behind all the vegetation. Only the terracotta box which contains the office-cum-library which sits above the main pavilion can be seen initially. The visitor then follows the “Katsura-inspired” zig-zag path to the entry, drawn by the dramatic cantilevered concrete canopy towards a timber wall feature of recycled Tallowood which, with the plantings, forms a warm-cool counterpoint with the offform concrete walls. 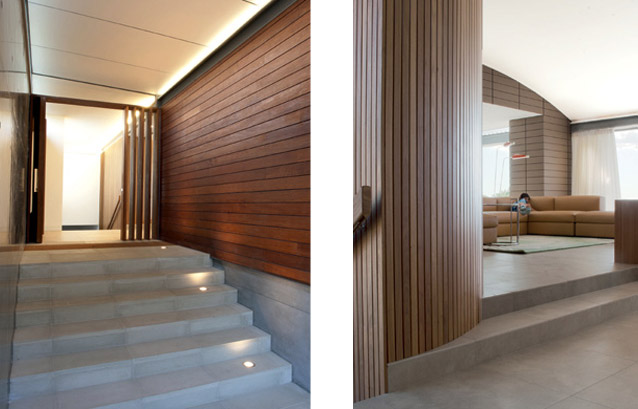 Left: The canopied entry beckons the visitor into a private, domestic world. Photo: Kraig Carlstrom
Right: Coming up the entry steps, the visitor is led into the living space by a curved timber-battened wall. Photo: Kurt Arnold.

Essentially, the house is an assembly of just four off-form concrete walls with a metal vaulted roof which seems to float above them. The feeling is that these elements are not so much constructed and connected as suspended and loosely held together by gravitational force. This relaxed counterpoint of materials and deft assembly of simple elements is repeated inside the house – hard and soft, warm and cool – most notably with the polished concrete kitchen bench which sits on a slightly recessed timber beam – “a timber shadow”, as Maceda describes it – giving the impression that it is floating. “It goes back to our main objective,” says Maceda, “which is to reveal the richness of each building material.” This is also highlighted in the kitchen where the off-form concrete outside becomes the splashback inside.

There is what Maceda refers to as a “clarity of assembly” of the three main elements of the house: the off-form concrete wall, the terracotta box and the vaulted roof. This, in turn, is complemented by the timber elements which feature intricate detailing. 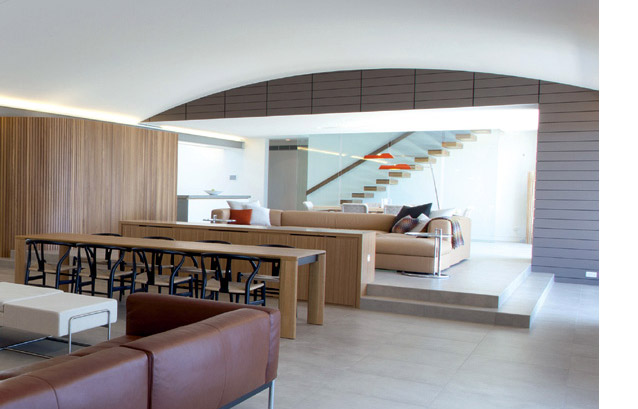 Typically, Popov engineers an extended sequence of arrival, delaying the final, magnificent reveal, and marking the journey by a transition from the robust exterior to an increasing delicacy as we venture inside. Drawn by the timber wall feature, the visitor passes through the  temple-like portal, turns left and up a few steps to reach the timber-battened front door with its concealed bronze handle. Inside, the curved, timber batten exterior wall of the pantry opens a pathway into the main space where first the expansive living/dining/kitchen space is revealed and then, beyond it, the deck and the panoramic views are presented.

In this sublime space, the structure is expressed, with the steel beams also serving to conceal services such as lighting, air-conditioning ducts and curtain tracks. Similarly, says Maceda, the aim was “to pare back all the finishes and let the richness of each building material reveal itself”. As required in the brief, this open plan living area is subtly divided by a low step, separating the formal dining and sitting area from a family-oriented sitting area and informal dining area opposite the kitchen.

Although the master bedroom is on this main, ground-floor entry level, there is actually a clear separation of the domestic and the public areas – which, in effect, is a separation of the adults’ and the children’s areas, with four bedrooms on the lower ground floor, a rumpus room and the laundry, all of which lead out to the 30-metre lap pool. 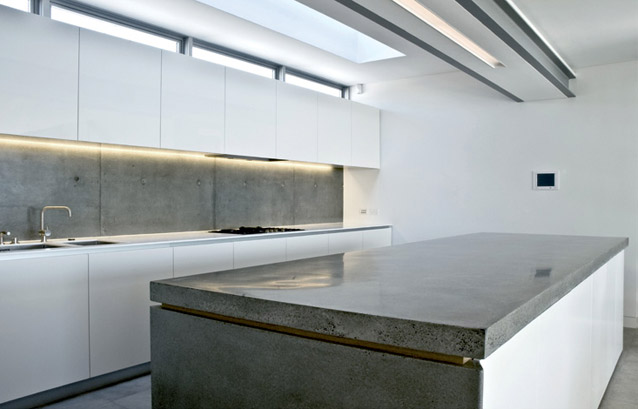 On this wide site, the house is a linear assembly of spaces, all facing north, with an upstairs deck and lower ground floor terrace running the length of the house, each protected by generous overhangs. “You can,” says Deirdre, “keep your doors and windows open and not be affected by the weather.” The combination of overhangs and cross-ventilation (generated by highlight windows) means that the air-conditioning is rarely necessary.

However, until one actually steps outside, the architects have carefully cropped the views – partly to heighten the drama, but also to bring the landscape inside, effectively as a decorative element. From the dining room, for example, there is only a partial view of the harbour. In the master bedroom, the western side looks out on to a bushland reserve. But again the view is edited, this time with low slot windows and a low bed so that lying down one sees a framed view of the reserve while at the same time enjoying privacy.

In many respects, this is a typical Alex Popov house. But in a crucial sense the house also represents a new stage in the evolution of the practice which has recently gone through a process of re-structuring and re-defining itself. 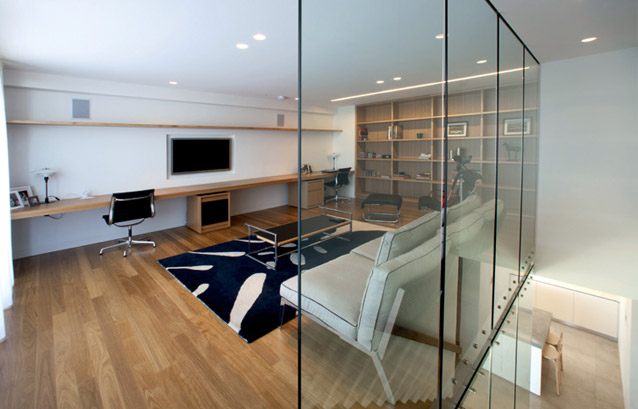 The home office which sits in the terracotta ‘box’. Photo: Kraig Carlstrom.

“There have been,” says Maceda, “too many instances of a disconnect between the vision and the actual living space that the client gets in the end.” Hence, Popov Bass Architects (as the practice is now called, with Brian Bass becoming a partner) have adopted an integrated approach to their commissions, working on both the architecture and the interiors to ensure a fully coherent final result.

For the Mosman house, the architects have worked with Will Dangar on the landscaping and with Russell Koskela on the interiors, designing all the joinery and specifying all the furnishings.

The result is indeed a seamless harmony of carefully calibrated elements – of complementary materials and colours. Structurally simple and aesthetically refined, the house is nonetheless a thoroughly functional family home. Inside, the spaces balance connection and separation. Outside, on the other hand, the house connects easily and unobtrusively with its context. 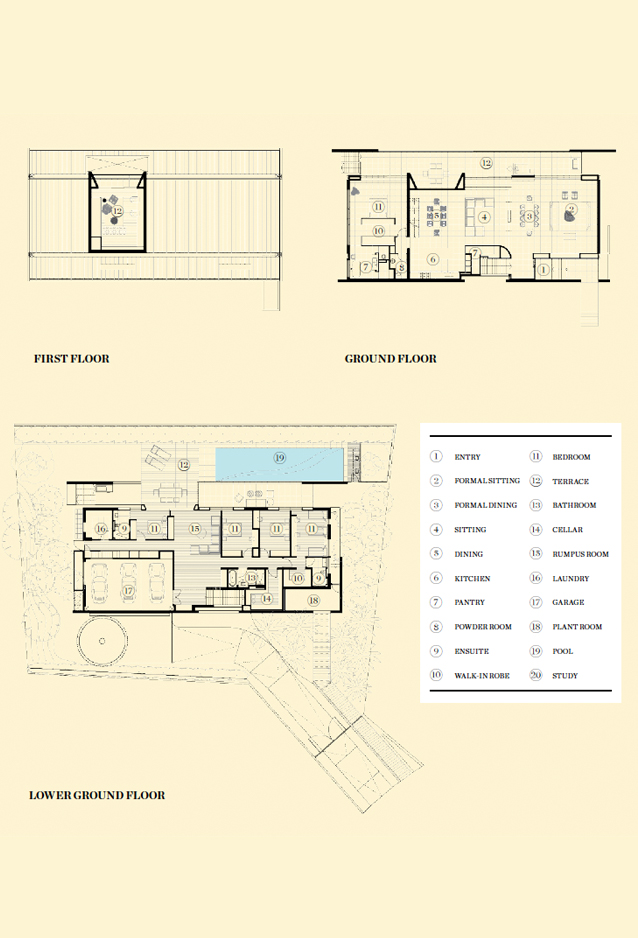 As is often the case, the children become the litmus test. “Because it is in a cul-de-sac,” says Deirdre, “all the local children gather here and play every afternoon. They just open their gates and the kids come down. It has facilitated this old-style neighbourhood with interaction between the children, and then the parents come and pick them up.” 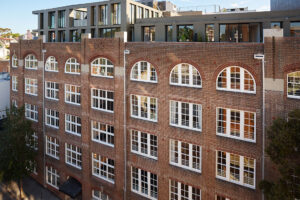 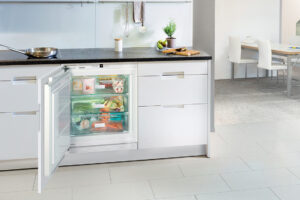 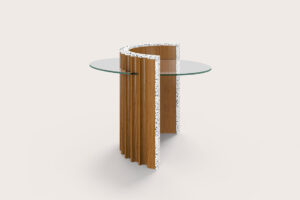 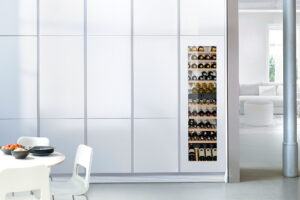