A New Lease on Life

A New Lease on Life 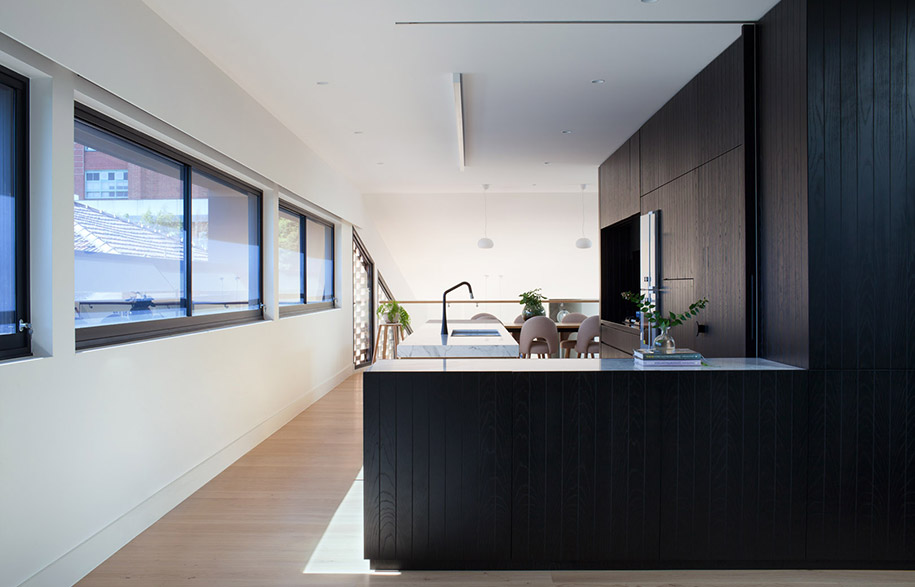 The challenge of re-birthing a poorly renovated and compromised 1930’s dwelling resulted in a contemporary and charming design; the Richmond Hill house.

Richmond Hill house offers commanding views of Melbourne’s skyline from its contemporary meets heritage aesthetic. The design required careful consideration from the architectural team at Rachcoff Vella; despite the orientation of the site offering great potential, the challenge was to unpeel the poorly built additions the house had seen over the years to allow for a clean break from the existing heritage house.

After peeling back the rear mid-late century additions, what remained was quite an intact post war brick dwelling. It was clear going forward that any new works would need to be well articulated in form, so as to not compete with or dominate the original dwelling.

The natural fall in the site let the additions to be split-level, with the new brickwork standing in contrast against the dark timber cladding, creating a sense of light and shade.

The brick façade pattern lets morning and afternoon sun to filter into the living room, whilst also acting as an effective privacy screen. With naturally gorgeous views available, the windows were carefully crafted to avoid overlooking the neighbours.

Touches to the existing building include a new front porch and timber slat fence, which allows for cohesion between the new and old works.

The calm and simple interior allows the occupants and the busy urban environment to take centre stage. The hero of the design is a blonde Scandinavian timber flooring system that wraps itself into the joinery, stairs and walls. This is contrasted against the black box in the middle of the open plan first floor, essentially a pod to conceal services and offer a light filled stairway to the roof top terrace. This black and blonde theme is carried throughout the house, inside and out, which stands together with the old and new theme of the space.