Kartell: The Culture of Plasti.. Looking to combine both home and studio, Malaysian architects, Building Bloc, took on an old bungalow and gave it a total makeover. Amy Ng reports that it became a test of whether the architects could live in one of their own distinctive houses.

Above: The metal grates of this house were left to rust to perfection. left | the unassuming frontage of this house all ow for ample parking space at the entrance.

There’s an ongoing commentary in design circles – namely, that architects should try to live in a house that they have designed, at least once in their lives. The irony is not lost on Wen Hsia and BC Ang who are doing just that. The 30-something duo behind Malaysian architecture firm, Building Bloc, were looking to combine a home and an office when they were scouting for a house in Petaling Jaya a couple of years ago. As luck would have it, a bungalow came up for sale and the couple soon got to work tearing down walls and carving out new spaces. The project became an experiment and a necessity all rolled into one, and was completed within six months in 2009.

A lightweight roof structure and generous height of the house increased the spatial volume and makes an airy abode.

“We love to experiment. A big part of what drives our studio and us is the need for innovation. Hence, we dip our toes into trying out things that might be overlooked by others,” says Wen Hsia. Using concrete, bricks, steel and glass in its basic form, the house is a testament to their industrial aesthetic. Raw, unfinished materials are left as is; steel grilles are left to rust, and offform concrete ceilings are left bare – one is hardpressed to be able to find a painted wall within their compound.

Furniture of all manner and sizes, salvaged from junk yards and vintage shops, is scattered across the living room.

The idea behind their abode is rooted in thriftiness. And when it came to crunch time, creativity triumphed. “We were watching our costs to ensure that our budget was met, so it became a challenge to see where we could save without sacrificing quality,” adds Wen Hsia. While they have implemented low-tech strategies that will save costs and energy, it’s the way they did it that was novel in execution.

Take, for instance, the double roof which consists of a single, thin concrete plane with a layer of garden mesh stretched out above it that acts as an insulator against the hot, tropical climate. Or the rainwater harvesting system that was built with a series of terracotta drain pipes connected underground. These chimney-like installations can collect and contain enough rainwater to last a week of watering plants in their garden – handy when rain is scarce. Even their home’s metal grilles, used in gates and windows, were made of scrap metal – the pair scoured junkyards in search of large solid metal sheets, which were remnant materials of machinery die-cut sheets. Each one was carefully measured, cut and fused in place to create an amalgamation of patterns that is unique for each grille. It is these small, thoughtful gestures that have become the hallmark of their practice.

Left: Building bloc’s idea of beauty remains rooted in form following function, elevating it to an art form.
Right: the kitchen and dining have become the main focus of the living area.

From the outside looking in, the home appears quietly unassuming. The sliding motorised steel gate was custom built to accommodate plants to add a layer of screening – and was also one of their experiments. “It didn’t work out as we had hoped – we’re still finding ways to put in plants so that they are able to withstand movement. It’s all still a work in progress,” laughs BC. With ample space for parking, visitors then traverse a path leading up to a heavy gate that has been rusted to perfection. It opens to a sheltered courtyard beyond a brick wall, and is guarded by the couple’s black German Shepherd, Arang (meaning ‘charcoal’ in Malay), as he makes his rounds throughout the house.

A wet kitchen is extended out to the side garden, where continuation of the lines and elements serve to elongate and connect the outdoor and indoor.

The 3,500 square foot (325m2) house isn’t large by conventional standards, but its spatial quality is heightened by a large living room with a double-volume space that looks towards an inviting pool. Their furniture is an eclectic collection of vintage and thrift store finds, with leather chairs, plush couches, solid wooden tables and offbeat dining chairs adding much character to the space. The kitchen, which overlooks the dining area has an adjoining door that leads out to the garden. An outdoor stove with a choice selection of self-grown herbs and plants completes the area, as it is one of the most used spaces within the house. Refreshingly, they’ve managed to blur the line between outdoors and indoors, tapping cool breezes while allowing heat to escape efficiently so that the building does not use air-conditioning, unless absolutely necessary.

Little details in the entrance of BC and Wen Hsia’s home – light, volume and space are defined with simple materials and an understanding of space.

As a relatively young studio, Building Bloc has had its hands full in conceptualising homes, offices and various small projects for the past five years. Their choice of materials are rooted in the same thriftiness that has made them popular for their quirky inventions and methodology. They’ve made lamps out of old wok covers and used copper piping as taps – consistently turning junk and scrap into beautiful functioning works of art that are unusually simple, yet sophisticated at the same time. “We were faced with the problem of weight loading once. A client had wanted a concrete table, but had it been built entirely of concrete, it would have been too heavy for the building. Only a slab was permitted and with nothing to rest it on, we had to be creative. In the end, we used the concrete slab’s rebar itself as a stand – twisting and manipulating it to form a solid base that’s as beautiful as it is functional,” relates Wen Hsia.

The master bathroom’s simple understated finishes add a touch of rawness while showcasing the duo’s creativity. Note the copper used as fittings on pipes and taps.

In the future, they plan to map a clearer distinction between public and private spaces within the house. While there’s already a guest room fitted with a balcony and a kitchenette that is easily accessible from the entrance, the pair is looking to better organise their space, since they’d like to define areas for work and play to a greater degree. “Building a home isn’t just about carving a shell. It’s about space, it’s about the people, and it’s about the flow for both spaces and people,” quips Wen Hsia.

Almost everything is left as is in this house – bricks, concrete and steel.

So how has the experience affected their design process for clients and projects? “After building our own home, we’re more sensitive when it comes to designing homes for others. A testament to a good house is how well it integrates into people’s lives, and having gone through the paces of building our own, we understand people’s needs and are better equipped when it comes to carving out other people’s spaces.” 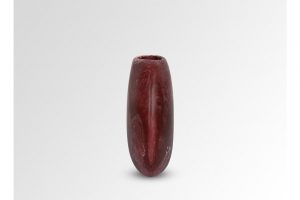 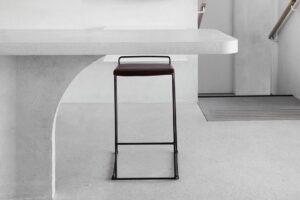