Building With The Orang Asli

At Home with the Shermans

At Home with the Shermans 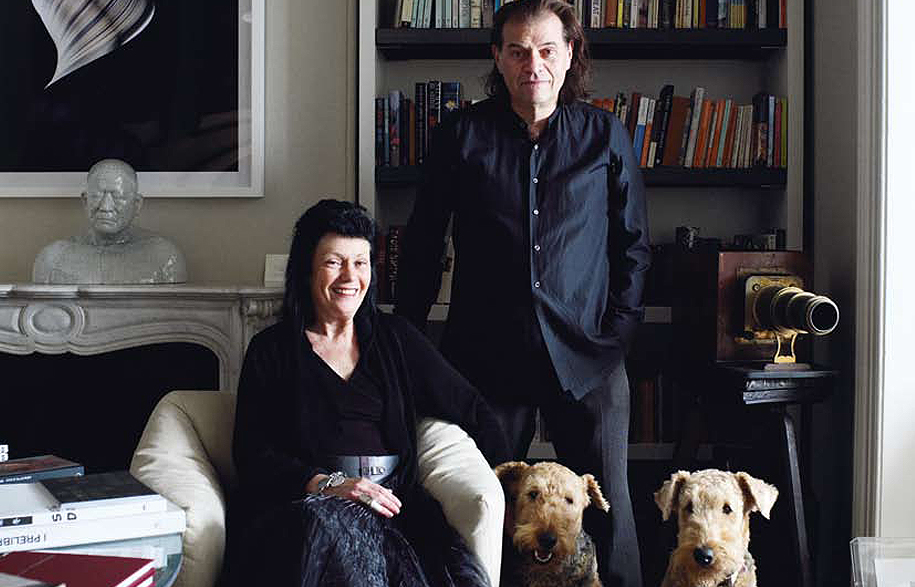 On the face of it, they move in very different circles – he in the corporate world, she in the visual arts. But, says Michael Young, Gene and Brian Sherman form a powerful partnership weaving together the arts, business and philanthropy.

Above: Gene and Brian with father and daughter duo, Cosmo and Tara. On the shelf is a porcelain bust by Chinese-born Australian artist Ah Xian, behind that a photograph by Melbourne-based digital video artist, Daniel Crooks.

On the wall of Brian’s study are photographs of the couple with statesmen, politicians and the occasional pop star. Their contact books are packed and their diaries bulge with appointments made weeks in advance and travel planned like military campaigns.

But the pace is beginning to slacken as priorities change and family – always important – becomes ever more important. Family photographs are everywhere – children, grandchildren, Gene’s mother aged sixteen and her Lithuanian grandmother. “These photographs,“ says Gene, “would be the first thing I took with me.”

The change of pace was signalled in February 2008 when Gene’s hugely successful Sherman Galleries morphed after 20 years into the Sherman Contemporary Art Foundation – “a public space financed by private money”.

“I had been thinking about and planning a foundation for nine years,” says Gene, “a place where I could exhibit significant and innovative contemporary art from Australia, the Asia-Pacific and the Middle East. Being a private foundation, I can do things that public institutions cannot.”

Gene has also served on several boards, the latest being the National Portrait Gallery in Canberra. In 2003, the French Government honoured her with the Chevalier de l’Ordre des Arts et des Lettres for services to French literature – she is a distinguished academic, a fluent French speaker and was recently awarded a Doctorate of Letters from the University of Sydney.

While Gene pursued the life of a gallerist, Brian (with his friend Laurence Freedman) launched the hugely successful fund management company, EquitiLink. From 1982 to 2000, he travelled extensively. “I made 74 trips to the US in 15 years. Sixteen of those trips were with the EquitiLink road show where we did three cities a day,“ he says. He has also sat on countless boards, including the Sydney Organising Committee for the 2000 Olympics. For several years now, he has been President of the Board of Trustees of the Australian Museum Trust.

In 2004 – the same year Brian was awarded the Order of Australia for services to the community as a philanthropist and benefactor – he founded (with daughter, Ondine) Voiceless, an independent non-profit think tank dedicated to alleviating the suffering of animals in Australia. Now 70% of his time is spent running what has been described as one of the most potent animal welfare groups in Australia. “Voiceless is my passion,” says Brian. “Factory farming is one of the world’s most iniquitous industries and the role of Voiceless is to lift the veil of secrecy that surrounds this terrible industry.”

The vegetarian (Gene) and vegan (Brian) have been married now for over 40 years. During that time they have travelled far, both physically and intellectually, a journey often predicated on ethical decisions. They left their native South Africa in 1976 because of apartheid. Then in 1982, after a false start emigration to the UK, they arrived in Australia with $5,200 in their pockets.

They have lived in many houses over the years, some quite small where the furniture jostled for space and where the kitchen table served as the EquitiLink office when it was launched.

Alec Tzannes has been the Shermans’ architect of choice for over a decade. He has designed several projects for them – an addition to the Sherman Gallery in Goodhope Street, Paddington, a renovation of a tiny cottage opposite the gallery for use as an artist’s residence and, in 2005, the transformation of an old 1800s corner shop and outbuilding in Paddington into an award-winning office for Brian’s Sherman Group. “The attention to detail was phenomenal,” says Brian.

Tzannes also drew up plans for a major renovation of the Shermans’ grand Paddington villa. But this was never realised. “We couldn’t face the prospect of living in a hotel for several months while the renovations were done,” says Gene. So, they decided to move.

“Brian wasn’t keen to move out of Paddington, but the Paddington we had grown to love had changed since the opening of Westfield (shopping mall) at Bondi Junction,“ says Gene. “I looked at just one house in Woollahra and Brian finally gave in.”

“I grew up in a small mining town in South Africa,” adds Brian. “There were no footpaths in the streets, and often no shoes on my feet. Now I love living in a built-up urban environment which still retains a village ambience.”

The house, a heritage-listed property with a classical Sydney façade, sits on one half of a double block – the house fills one block, the formal garden and pool the other – and was extended and substantially renovated in 2005 by Tzannes. Gene fell in love with the house immediately.

“One of the great beauties of the house is that the interior décor is just what I would have chosen.” The interior colours, door furniture, floor coverings, light fittings and plush taupe-coloured drapes and muted colour palette were designed by one of Gene’s favourite designers, the Parisbased Christian Liaigre. “They were just what I would have chosen had I started from scratch,” she says. “It veered towards a cool, but not too minimalist aesthetic that interested me – plush and cool, but not devoid of feeling.”

Left: Main bedroom with Torso chair designed by Paolo Deganello for Cassina and timber seating pods.
Right: Gene in her study. An Ingo Maurer lamp hangs above the desk, on the wall is a photograph by Chinese film maker, Yang Fudong.

Contemporary art is an intrinsic part of the Shermans’ life. It is a counterpoint that resonates throughout the house. Every inch of wall space, every nook and cranny, displays a favourite piece. And there are many – the Shermans have been collecting art for over forty years.

Many of Australia’s and Asia’s leading contemporary artists are here: Bill Henson, Zhang Huan, Shaun Gladwell, Song Dong, Guan Wei, Ah Xian, and Mike Parr. Art is the focus of attention in every room, presiding over an eclectic mix of possessions pulled together over many years. “I like the old with the new,” says Gene. Hence, a Philippe Starck ‘Ghost chair’ sits alongside an old carriage box from South Africa. gene and brian sherman — NSW, australia

Art defines the Shermans, creating an aesthetic not easily separated from the consideration of everything they do in their professional and private lives. The aesthetic ambience flows easily from room to room, and from building to building. Brian’s study in the house and the boardroom of his office both share works from a series of nine photographs taken by Chinese performance artist, Zhang Huan, showing at a gargantuan scale Huan’s own face gradually obliterated by calligraphy.

When they moved into the current house, the emphasis shifted to work by artists using photography in their practice, or performance artists who use photography to record performance.

Although colour is kept under strict control, books are not. There are thousands of them. “I always wanted a dedicated library,” says Gene. “For years I’ve had books scattered at different locations – in an apartment in Tel Aviv, at the farm, and at Brian’s office.“ Now the books are united, orderly and marshalled in specially built book cases in a room that boasts several early Bill Henson photographs and a small Mike Parr drawing casually leaning against the marble fireplace above which is an exquisite, almost monochrome, photograph by Melbourne-based artist, Daniel Crooks. Here, too, is an exquisite porcelain bust by Chinese conceptual artist Ah Xian, who fled China post-Tiananmen. The library occupies the front of the house. This is Gene’s private space. Womb-like and closeted, but not exclusive. It also serves as a reception room.

The Shermans prefer to live with strong ideas rather than strong colour. But the house is not colourless. The hallway that runs from the front door through to the back of the house borrows colour from the art: the blue of a southern Indian sky photographed by Lynn Roberts-Goodwin, the red earth of outback Australia that features Shaun Gladwell cradling a dead kangaroo – a road kill victim – in a modern pietá.

Tzannes’ 2005 addition at the rear opens to a large entertaining area, dominated by three things: a huge stainless steel kitchen bench, a long table capable of seating 14 and a massive Philippe Starck dog-leg sofa. This room hosts the legendary dinners that take place after gallery openings where up to 70 guests – writers, painters, architects – spill out into the garden area. “Over the years, we have entertained thousands of guests,” says Brian. Gene estimates 14,000.

Cleverly, Tzannes resisted opening up all of the downstairs space. Off the main entertaining area, he created two small, almost niche-like, secluded rooms and a tiny Mediterranean courtyard that invites reflection while allowing light to flow into these more intimate spaces.

Upstairs, the bedrooms are almost traditional Sydney. Tall windows open on to balconies and light bounces everywhere. One room Gene has commandeered for her study where two things stand out: the outrageously beautiful contemporary lamp by Inge Maurer above the desk and the theatrically contrived photograph of two Shanghai lovers by young Chinese moving image artist, Yang Fudong.

There is a quiet energy in this house, a feeling of determined intellectual endeavour. But there is also an astonishing confidence of purpose. It is a house of quiet contemplation where every piece of art and furniture adds to the sum of the whole.

“The most important factor in our home is comfort,” says Gene. “The home is our haven, our retreat. It is an accumulation of memories, of books, of our friends. It is all part of us. Everything has a history and then it is mixed with the present.”