In Conversation With… Barber Osgerby

Peng Loh Is The Grand Hotel(ie..

In Conversation With… Barber Osgerby 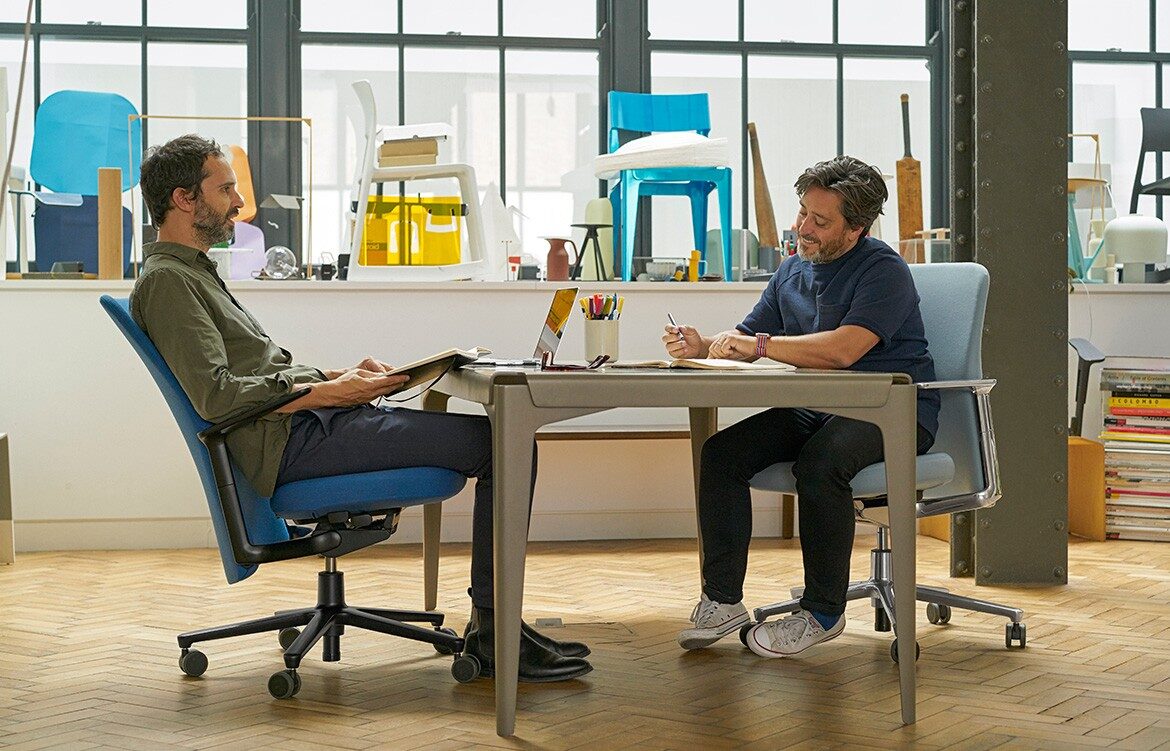 Ahead of Edward Barber’s Australian visit to launch Barber Osgerby’s Pacific chair for Vitra, we caught up with Ed and Jay – in the backseat of a black cab on the way from their East End office to give a lecture at the V&A. It’s not just London cabbies who have The Knowledge…

Stephen Todd: As a studio, Barber Osgerby has been around for some 20 years but you’ve not got a massive catalogue. I don’t get the sense that you’re churning out product.

Jay Osgerby: That’s an accurate assessment and there are lots of reasons for that. Firstly, because we spend a lot of time researching our products. Secondly, because we like to put out products that have something to say and that have some longevity to them. Some companies take pride in the fact that they can produce X number of products in Y amount of time, but that’s not really our philosophy.

EB: It’s not possible to be that prolific and be that good. Also, we retain a deliberately small design studio of six so we can focus on each product in an indepth manner.

Yet you head up three separate studios.

JO: Yes. One is an architecture and interiors company called Universal, the other is a strategy-based industrial design company called Map. Recently, we have manoeuvred those companies into positions where they can better run themselves. We’re founding directors but we’re not creative directors.

Is there a disconnect between the design studios you founded and the output of Barber Osgerby?

EB: Yes, I would say there is definitely a disconnect now. As they’ve grown and we’ve decided to move more deeply into furniture design we began parting ways two or three years ago.

Does that mean that we’ll begin to see more – and more intense – products from Barber Osgerby?

JO: Yes, but we’re not going to go crazy all of a sudden!

EB: Maybe ten new objects a year, not eight hundred or whatever. We’ll want to be making one really great chair that will last say thirty or forty years, not 12 shit chairs because we think the market can absorb them.

The Pacific chair is not your first product for Vitra but it is your first office chair. That must have been a steep learning curve.

JO: Like so many of these big projects, there is so much to learn. It’s like doing a master’s degree all over again. There are so many aspects of designing an office chair that are unique to that typology. Also, the people who buy it are probably not going to be the same people who use it, so you’re designing something that essentially has a list of options. Like a car really, it’s a system.

Given that you’d not done an office chair before, why did Vitra ask you to design one for them?

EB: They really liked the Tip Ton chair we designed for them in 2011. We’d worked out that if the skids were at a nine degree angle the chair would be functional in two distinct positions. Vitra were really very happy with that product because it opened up a new category in the chair market for them. Even though probably thousands of chairs are designed every year, to be able to say that there’s something completely new in a chair, that’s very difficult to do. They call it the new archetype.

Is that two-positon tip sled something that shall forever more be identified with Barber Osgerby?

JO: Well, the patent’s gone out with our name on it, so we imagine it will be, yes.

So Vitra thought you might be likely to revolutionise the office chair sector in the same way?

EB: Essentially, yes. But as soon as we began considering the project, it became evident that it’s harder because there are thousands of office chairs on the market and each one has its unique selling point. An arm, or back, or wheels that do something that another chair does not. It’s like a car, it needs its ‘thing’.

In 25 words or less, what is Pacific chair’s thing?

JO: It is a chair that offers all the functions of a task chair but it doesn’t look like it does because it’s so visually simple.

Edward Barber and Jay Osgerby were In Conversation With… Stephen Todd