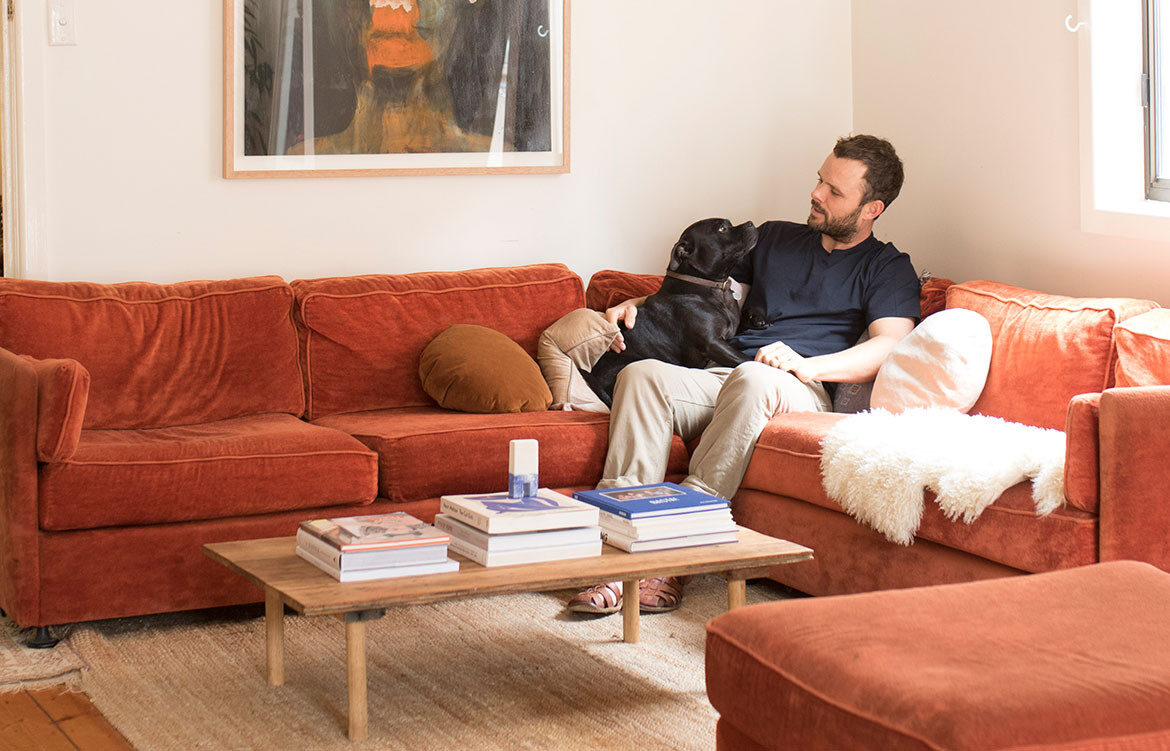 Time spent on construction sites familiarised Scottish-born Steven John Clark, A.K.A. Den Holm, with Aussie idioms just as much as it did with the homes Australians are building, how we’re filling them and what we’re missing.

Denholm is a small village located between Jedburgh and Hawick in the Scottish Borders region of Scotland. Den Holm is the pseudonym of Steven John Clark, a Scottish-born, Melbourne-based stonemason and sculptor who, in recent times, has taken the local architecture and design community by storm. If you hadn’t guessed, Steven hails from Denholm.

That’s about as close to straightforward as his story gets. At 16, Steven left school to embark on a bricklaying apprenticeship. By 19, the goal posts had shifted once more. With an idea to study fashion design at Central Saint Martins in London, run his own label, and show at London Fashion Week, Steven first needed to gain qualifications in fashion technology which led to studying textile embroidery in Manchester. It was here that he met his wife, artist and photographer Bobby Clark.
Somewhere en route to London, the couple found themselves on Australian shores.

Originally, Australia was only meant to be a brief pit stop, admittedly quite the detour. Although they were planning to stay only a year, six months in they realised they might like to stay a little longer. Reasoning that the only way to stay in the country was for Steven to re-enter the construction business, the next five years saw Steven put his creative endeavours on hold. And so it goes, from bricklaying to fashion textiles and back again.

The spark that led to Den Holm came when a friend asked him to make a plinth out of stone to showcase her work. “I’d worked with stone since the age of sixteen [but] I’d never seen it as something creative,” says Steven. That was two years ago.

While the first six months were met with understandable trepidation, a few key commissions set the wheels swiftly in motion. PLAYA by Lucy Folk in Bondi and Rae’s on Wategos in Byron Bay are two such examples both commissioned by Sydney-based interior designer and Habitus alumni Tamsin Johnson. The subsequent 18 months have seen Den Holm build a cult following. “Before that I would still say I was a stonemason, I didn’t have the [confidence] to say I was a sculptor.”

Steven’s artistic process, as for many creatives, isn’t easily defined. Not least because he doesn’t necessarily document his process (even mentally), but also because it will change from piece to piece, project to project. Usually, it begins with Steven drawing directly onto the stone… or walls. “For some reason I don’t like drawing on paper. I’ve got my own space now, I’m allowed to draw on the walls – so I’m going to draw on walls,” he says. Compared to the seemingly endless scale of walls, a piece of paper certainly does seem restrictive.

As for the physical process, Steven prefers not to be bound by rules, habits or conventions. He was once told that sculptors have one of two ways of working: either from the bottom up, adding pieces to make a final sculpture; or top down chipping away at a block for the final result.

“I thought that’s pretty boring, you can only be one of them? I want to do everything. I know a lot of the time you tell yourself if you do everything you’re never going to get good at one thing, but what excites me is trying everything,” he says. Even limestone, the material for which he’s currently renowned, is simply what he’s working with at the moment, but by no means will it hold an exclusive place in his repertoire.

So while most of the planters and vases are top down, many of Steven’s sculptures are built from the bottom up. The two processes complement each other perfectly, given that the former produces waste and the latter offers an avenue through which to use it.

Steven’s planters – bob, helen, laura and so on – are the names of family friends. His vases – balboa, duke – borrow their names from characters in the film Rocky. “I don’t really think about names too much,” says Steven. Not because he holds no meaning in a name, but more by way of avoiding getting caught in the rabbit hole that can be naming your work. “It’s a way of connecting something without getting too caught up in what it should be called. I don’t think about names beforehand. I like the way the letters are in ‘Den Holm’ and I like the way it can be pronounced.” It’s quite a poetic way of thinking, really.

Steven and Bobby are renting at the moment, but when the time comes and opportunity allows it, the plan is for Steven to build their own home – “there’s no doubt about that”. Where? Maybe Melbourne, but definitely Australia. Byron Bay is also a strong contender. “I would approach the home in the same way as I approach all my sculptures… It doesn’t need to all be functional, but have it highly functional in some areas – like the kitchen,” says Steven.

With a thick Scottish accent, a gregarious personality and the occasional borrowing of Aussie slang, Steven John Clark, A.K.A. Den Holm, reminds us that a free spirit is the perfect yin to the yang of hard work and dedication.