Design Dissolves Barriers at A..

The Step Down House 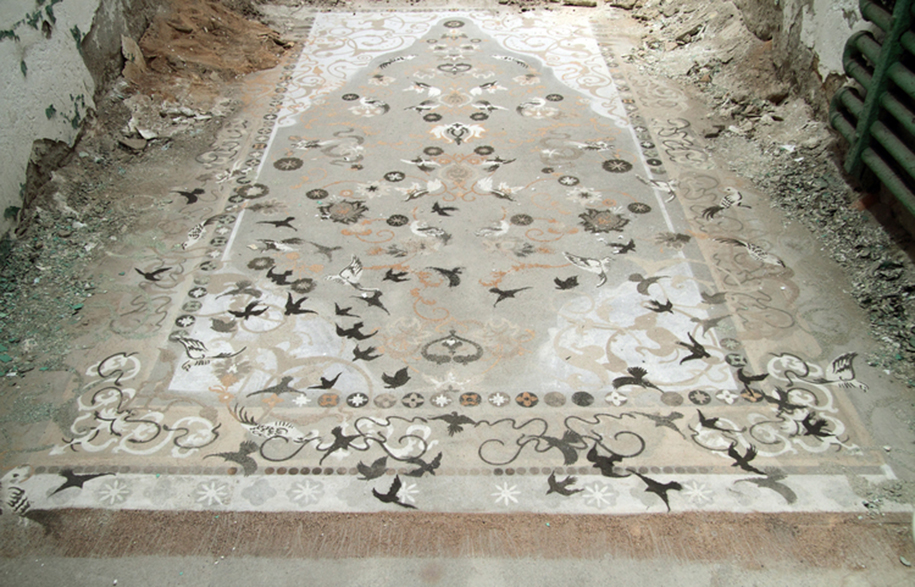 In the last of her four-part series on ‘stuff’, Joanne Gambale asks where ornament, art and the make-do-and-menders sit within the minimalist ideal.

Handcrafted furniture and seasonless style aside, the most obvious antidote to too much stuff is less stuff. If you visit US online homewares store Piaule, you will find just two products under the category ‘Towel’; one is a hand towel and the other a bath towel in thin Japanese cotton. ‘Tableware’ is just one cup, one bowl, one plate. It’s what The Future Laboratory are calling ‘anti-choice architecture’, a radical streamline of inventory at odds with the retail culture of volume shifting.

It all boils down to what the minimalists have been practising for decades. Marie Kondo’s Spark Joy inspired my own mission to cull in the home, find the joy in what I have and value the handcrafted. Instead of following a relentless shopping instinct, I want to turn my focus back to what I’ve already collected. The scraps of vintage kimono silk, the 1950s souvenir dolls. Not quite what the minimalists had in mind.

Minimalism is relevant again as we contend mass-consumption, and social media has given it a human voice this time around. Joshua Fields Millburn and Ryan Nicodemus of The Minimalists blog and docu-film now have millions of followers, as does the Tiny House movement. More of us are throwing in the proverbial towel and going for that thin, 100 per cent cotton towel from Piaule instead. I take great comfort in this collective response that is powered by people fed up with relying on government for change.

But while I’m happy to steer clear of cheap homewares and ‘on-trend’ advice, my living room will never look like Joshua Fields Milburn’s. I wear sequins to school pick-ups, for God’s sake.

So I’m calling myself ‘minimalish’. The half-made pom-pom garland I strung in between contractions while in early labour with my second daughter still hangs beneath a mantelpiece and makes me very happy.

When I think who would fight in my corner of excessive decoration I think of artist Kate Rohde. Her works are Rococo-inspired and a mad mix of coloured paint and resin; maximalism to the max. She titled her 2013 collection Ornament Crimes in reference to the Adolf Loos Bauhaus essay Ornament as Crime, written at the advent of the Modernist era. But even Kate says she’s “very unsentimental about keeping things”.

“I’d say rather than the Kondo ‘does it spark joy’ philosophy, I ask is it still useful to me?”

Her own creativity is expressed through her work, while my (lesser version of) creativity manifests itself in the vignettes of bric-à-brac I group around my mantels. We can’t all let loose in a resin-splattered studio.

It helps me to know that Marie Kondo, who also wrote The Life-Changing Magic of Tidying Up, owns 19 sets of chopstick rests and advocates decorating your home with baubles and tchotchkes.

Ornament and art are functional in the home if their function is to assure daily happiness. Art curator Juliet Rosser founded Platform72 based on a belief that “life is better with art”. “People are sick of ‘stuff’,” she tells me. “Things they have accumulated that have no soul, no meaning, no story to the owner.”

For her there’s an interesting intersection between the notion of luxury and arts and crafts. “What is more luxurious than something made with the hands, heart and soul of another human being? I know I would prefer to live in a home where I engage with most items.”

Artist Hannah Bertram says ornament “simultaneously adds value and is functionally superfluous”. Interestingly, Hannah Bertram’s work is the ultimate in ephemeral art. She uses stencils to create intricate installations in dust. The temporary nature of her work is its point; it honours the passing of time. She links this idea to the Japanese philosophy of wabi sabi; the acceptance of growth, decay and death as an integral part of living.

So what of the decaying stuff you just can’t bear to bin? I always think of my friend Myles, the fine furniture maker who stitched a plastic high-chair tray with copper wire. I need to hold on to my utopian dream of reformed industries around the repair services – more tailors, re-upholsterers, cracked-plastics specialists to call upon. Maybe someone is already collecting brittle screws intent on saving a few shelves from a premature end.

Myles tells me that those who know how to repair and see value in materials and objects that others don’t – a spark plug here or a fuel filter there – would appear to be terrible hoarders.

Decluttering is a symbolic gesture, but better than binning is investing time or money into repairing what we can. I fantasize about leaving my children’s broken doll’s house furniture on a street corner somewhere for a lucky child’s clever grandpa to find and fix.

When a consequence of capitalism is that even some high-end brands have fallen prey to cost-cutting, one of the few surviving definitions of luxury is rarity – and the rarest commodity of this age is time. The time it took Myles Gostelow to carve minute details into each corner of my table, the time it took Hannah Bertram to create an artwork in dust that she knew could be blown away in seconds.

“We predict a polarisation between the ‘wants’ and the ‘want nots,’” explains Future Lab’s Chris Anderson. “How we all grapple with the complications of 21st-century living will increasingly be divided along civic and ethical lines.”

The millions of new subscribers to anti-consumption values shows a definite veer off the dangerous highway; some of us are minimising, some unplugging, downsizing and some advocating slow making. We can’t necessarily realise utopian dreams in our lifetimes but we can think twice about that cheap coffee table.