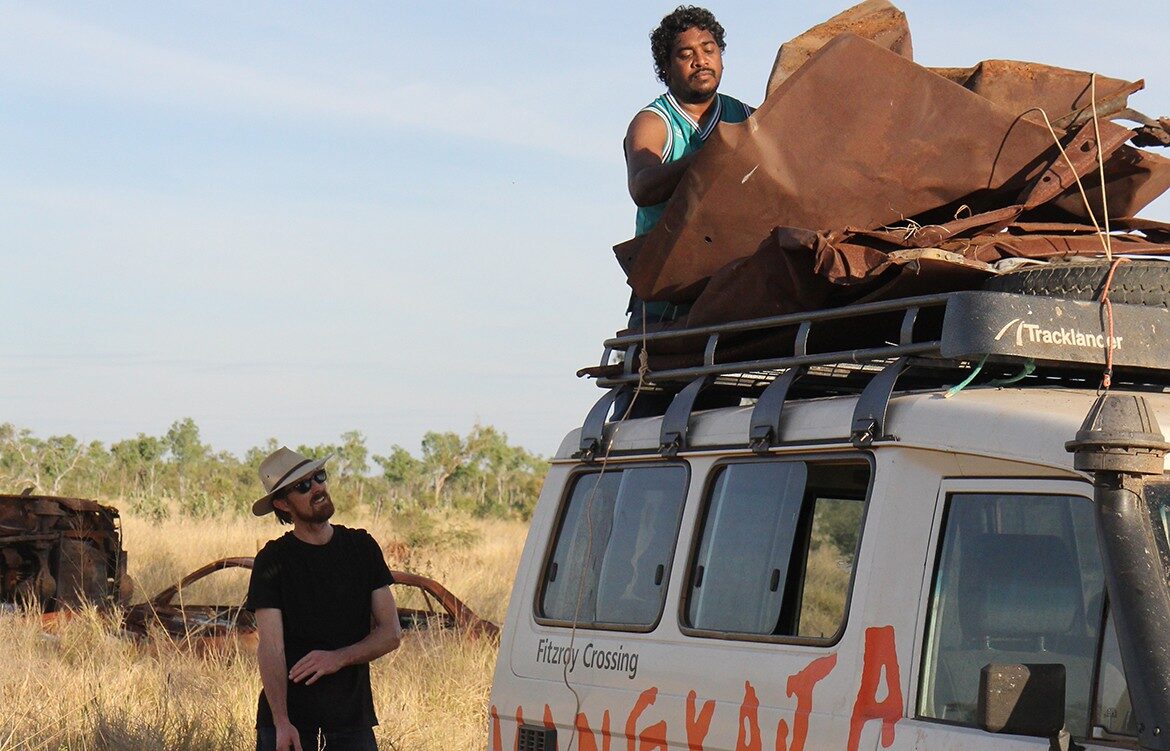 Design anthropologist Trent Jansen has unveiled a new body of work in collaboration with the Mangkala indigenous collective of Fitzroy Crossing.

ST: The In Cahoots show at the Fremantle Arts Centre aligns six indigenous collectives with six urban-based creatives. You worked with folk at the remote Fitzroy Crossing. How did that come about?

TJ: It’s funny, I shared a house with friends in Alice Springs a few years back, and we’d had this idea for a long time to collaborate with a remote community. But for one reason or another it never came about. Then the FAC developed the idea of In Cahoots, this massive collaborative project and it all just fell into place nicely.

What was the process?

The premise was that each of the six artists including me (even though I don’t consider myself an artist) would visit the remote community twice. The first time for a week or two weeks. Then another period within six months for a further three to six weeks. I can’t quite remember what time of year I first visited, but it was certainly getting hot. I stayed for about ten days, getting the lay of the land, getting to know which people would be the most likely collaborators. I was really aware that we didn’t have a lot of time to create objects that would function, which is what distinguishes design from art. The work needs to be constructed, to be strong, durable. It’s not something that can just happen in a makeshift manner, it’s got to function.

We’ve already witnessed your fascination with creature myths in your Monsters collection for Broached Commissions. One of your main In Cahoots pieces is also based on a creature. What’s that about?

On that first visit I met with one of my collaborators, Rita Minga, and she introduced me to some of the local narratives. She told me the story of the Jangarra which was a tale the adults recounted to the children about a wild man that hid in the massive anthills you find out there. It was a story used to scare the children into behaving, not running too far afield, that sort of thing.

A while back you described the Jangarra armchair to me as “that lumpy looking thing”.

[laughs] Yeah, it’s an armchair. Loosely. Not a particularly functional armchair but still… It’s actually made from carved coolamons, shallow, hand-carved serving dishes we’ve stacked up on a structural base. We put the major elements into place at Fitzroy Crossing, then I finished it off in my studio at Thirroul on the south coast of New South Wales with a couple of the aboriginal guys. We had to do the final touches in situ at the art centre in Fremantle, it needed some more hair. Some of the old ladies at Fitzroy Crossing make string out of human hair using an amazing apparatus.

Then there is the car crash furniture…

Yes, we visited a car graveyard which was full of incredibly beautiful wreckage. Some of the bonnets were in really evocative shapes, it wasn’t too much of a stretch to imagine them developed into chairs or benches. One crumpled piece of metal had obviously encountered a tree or a ’roo and was pretty much sitting on an old car in the form we ended up using. We called this series Collision.

They’re all one-off or very limited edition. Any plans to develop them into a commercial collection?

I’d like to do more of them, but I doubt that they’ll ever be massively commercial. Yet they are beautiful, functional objects. I’m very keen to keep exploring this process and I’m really keen to keep working with several of the members of the group. I intend to continue spending time in Fitzroy Crossing, and have plans to continue working with them if they’ll have me.

Trent Jansen was In Conversation With… Stephen Todd