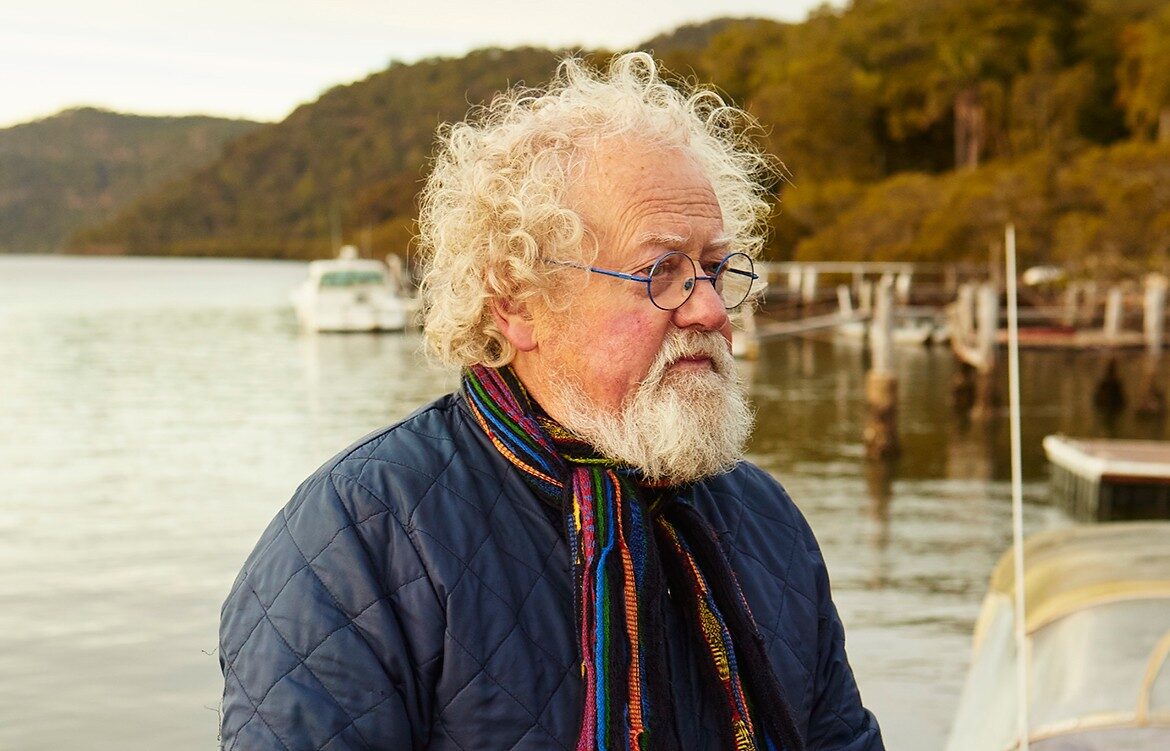 Sophia Watson lifts the veil on luminary architect and academic Lindsay Johnston, a brilliantly performative designer using architecture as a medium to express his personal, nomadic experiences and his cheeky, rebellious character.

I’ve have always been a bit of a sh*t-stirrer,” says Lindsay. “I got myself into trouble all the time at school, but somehow ended up as a prefect on the Student Representative Council. I’m abrasive, which is a product of my ultra-Scottish protestant upbringing, combined with a southern-Irish Catholic sense of humour that – thankfully – mitigates some of that abrasiveness.”

Having grown-up in Belfast Northern Ireland, studied architecture in Scotland, and worked for over a decade with the government in the U.K. during the unforgiving Thatcher years, Lindsay’s design output has always been about far more than basic form and function. His work, both architecturally and academically, is wonderfully disobedient, provocative and purposeful, and not only tells the story of where he’s been – but what he’s learned there, too.

“The early influences in my architectural life were based on the vernacular of brilliant east-coast villages in Scotland and the cottages of Ireland, particularly the materials, climate and context. But on the other hand, there was also an interest in technology and modernity. In the ’60s, my first job was working in London at the time of Carnaby Street, The Beatles, Mary Quant. Things like mod plastic furniture, primary colours and the capabilities of manufacturing in both furniture design and in building – particularly in cladding – really fascinated me. The heritage of my childhood and the cultural movements of my later youth were two complete opposites. Yet each can be seen in my architecture working together, particularly in the work that I did in Ireland, the competition I did for Battersea Park, and the design of a series of acrylic chairs for the Irish government offices at the Hanover Trade Fair in Germany, 1977.”

Lindsay’s eclectic approach to design may have something to do with his equally eclectic life, which has seen him move between careers the world over as an architect, a property developer, a technical advisor for low-cost government housing, a consultant to the World Bank in Saudi Arabia, an academic here in Australia and even having moonlighted as a sheep exporter from Ireland to Malaysia.

“I would have been 42 when I came to Australia,” says Lindsay. “So I’ve had another 50 per cent of my professional life in this country – a completely different cultural situation on the other side of the world. And that’s been hugely invigorating. I came to Australia in ’86 as an academic at the University of Newcastle – and I was very fortunate to get a job there, as I was quite different to what you’d call a ‘normal’ academic. I suppose because of my business experience and I guess my sh*t-stirring personality, I ended up being the head of department and eventually Dean.”

It was at the University of Newcastle where Lindsay used his academic position (first as an Associate Professor, then Head of Department, and eventually Faculty Dean) to instinctively challenge the established traditions of the field and, in his words, “open the world up to the possibilities of architecture and design thinking as being relevant in a much wider context”.

“When I was on the Council of the Institute [of Architects], I also became the Chair of the National Education Committee. We had an education policy then that was largely not understood, that envisaged what architects could do other than the mainstream idea that architects design iconic buildings or one-off houses for rich clients.”

This led Lindsay to become a key pioneer of a more democratic socialist design movement in Australia – investigating and championing initiatives where design education, particularly its’ more holistic multi-disciplinary values, might solve strategic problems in the commercial world for corporate professionals or much larger global concerns such as pollution, global warming, public housing and so on.

“If you look at the number of architecture students per head of the population against the limited view that architects can only operate as residential or commercial property designers for the wealthy, it just doesn’t add up. There are companies like Idea International in the U.S. who are using design theory to solve management problems. Consultancy companies like KPMG are investing in design thinkers to solve strategic problems and map out opportunities that others might not see.”

One of the more serious issues that has guided Lindsay’s career since the mid-90s is environmental sustainability. Having continued his architectural practice in parallel with his academic career, he used his research and teaching material as the basis of his practice.
He developed a specialisation in low energy and environmentally sustainable building design, for which he received the 1997 Royal Australian Institute of Architects’ NSW Chapter Environment Award for his highly experimental off-the-grid ‘autonomous’ house
in the Watagans Forest.

Having experienced first-hand the shortcomings of the architectural education system and the proven effects that applied design-thinking could have on the non-academic general population, Lindsay became principally responsible for founding and developing the Architecture Foundation Australia (OZ.E.TECTURE) in 2001. The annual masterclass program attracted the participation of fellow architectural luminaries Glenn Murcutt, Peter Stutchbury, Richard Leplastrier and Brit Andresen.

“The purpose was really for an alternative to mainstream architectural education,” says Lindsay. “I call it a ‘commando’ group that commits occasional education insolence as distinct from the universities, which are like the Roman legions, burdened by administration. We were all seeing too much architectural energy being put into what Murcutt calls ‘silly buildings’ – like the Monty Python Ministry of Silly Walks, we were worried by the Ministry of Silly Buildings – all style, no substance.”

Now more than ever, architects have a critical responsibility to contribute to the parts of society that really matter. Having personally lived and worked through some of the world’s most significant economic, political and cultural shifts, Lindsay sees this responsibility more clearly than anyone.

“The political situation internationally right now is appalling. I grew up (and I didn’t realise this much at the time) and got paid to go to university. I got a grant – everybody got a grant. I lived in social housing when I was a kid after the war because there was no housing. Then I got a job in the ’60s at a time when all government departments and local councils actually had a chief architects department. It was a more socialist society, in the best possible sense of the word. The National Health System (N.H.S. U.K.) and the fact that most of the public infrastructure was funded by government meant that people had less, but lived much better. We didn’t have any of this privatisation. Now, everything is privatised, and not for the better.”

While this may seem a little ‘doomsday-er’ for some, Lindsay’s legacy should serve the next guild of radical thinkers as a beacon of inspiration. As Karl Marx once famously said: “To be radical is to grasp things by the root”, and that is the legacy of Lindsay Johnston. Some people are thinkers, some are doers. Lindsay is both. And that’s what the world sorely needs right now. Because if a scrappy “sh*t-stirring” kid from Belfast can defiantly shake-up and influence the establishment for the better, then the coming generation of change-makers can, too.