Habitus On The Ground At Susta.. 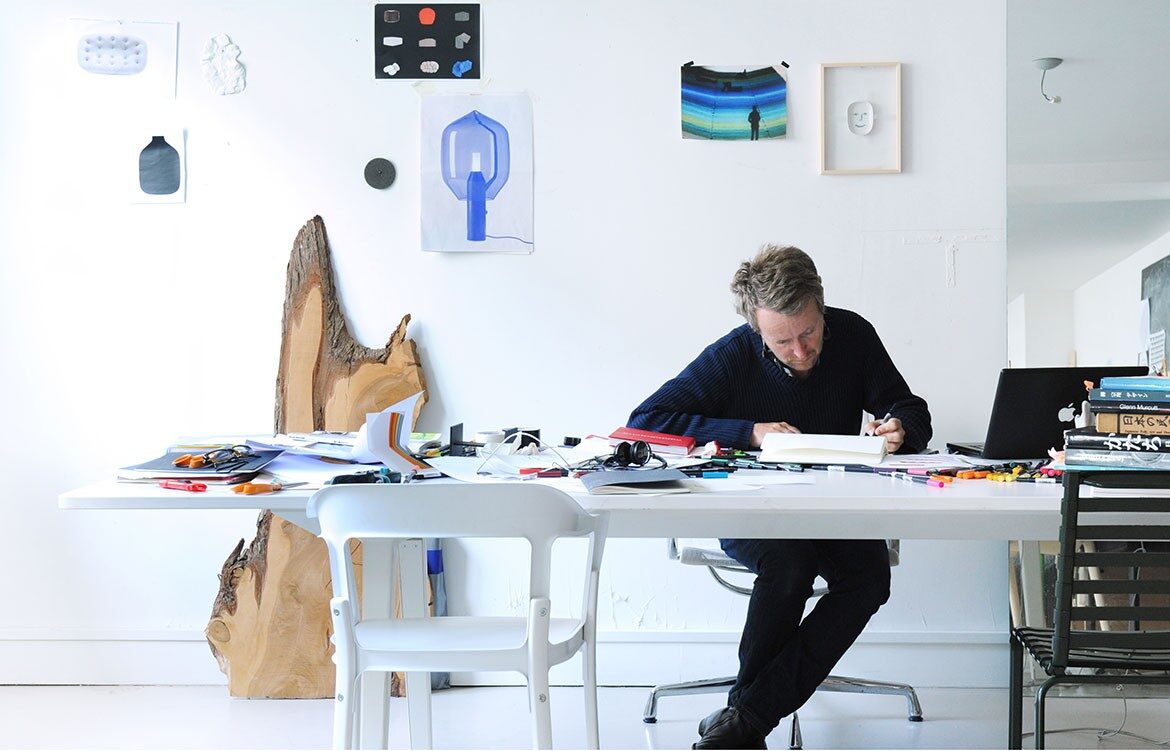 On a recent visit to Paris, we popped into the 18th arrondissement atelier of the Bouroullecs for a catch up with the older of the two brothers, Ronan.

Stephen Todd: It seems that every time I see you, you’re drawing.

Ronan Bouroullec: I can’t remember a time when I didn’t draw. I sketch because I need to analyse, to project the potential forms of a project. The métier of a designer is extremely frustrating in that it can take years of development from the initial idea to the final reality of the physical object. So the illustration becomes something extremely intimate, something immediate. Drawing, I have no need to discuss feasibility with an engineer, it’s something I do intuitively. I draw almost in the same way as I go for a walk, or swim. It’s the expression of a great liberty.

Is it fair to say that your working drawings seem quite brutal, almost primitive, whereas your artworks are more elegantly refined? I love the grand gesture of them.

It’s not for me to say if they are works of art, but it’s true that my personal work is more finished, more complete in and of itself. Those drawings belong to me, not to me and Erwan, not to the Bouroullec brothers. The working sketches, on the other hand, are studies for a Bouroullec project that will take on an autonomous life.

You began designing soon after you graduated from the Paris Ecole nationale supérieure des Arts Décoratifs in the early 1990s. Erwan – five years your junior and a graduate of the Ecole des Beaux Arts of Cergy-Pontoise – began assisting you until you formed the Bouroullec studio in 1999. How has your work process evolved over time?

Like any couple, we’re in constant evolution. Erwan was initially my assistant, we shared everything, worked on the same table. We spent at least ten years opposite one other. For a few years now we’ve each had our own tables. We still discuss everything but there’s a certain demarcation of tasks that has installed itself. For instance, Erwan is fascinated by electronics which is not where my strengths lie, so he follows certain projects that interest me less. We have affinities for different sectors and that’s created a natural and effective division of labour. Also, I’m older so I have a sense that the clock is ticking more quickly for me – there are so many things I want to achieve, whereas Erwan works to his own speed.

You regularly work with mega brands such as Cassina, Flos, Magis, Vitra. Do you pitch ideas to them or do they come to you?

We are unusual in that we had success early on in our careers, so propositions came to us early on and they still come to us. Which we know puts us in a rather unusual position, but we will only work with people who are as passionate about a project as we are. If we sense they are less than enthusiastic, we refuse the project. I need to know I am working with people who I can call on a Sunday night if the project we’ve been working on for two years all of a sudden feels wrong to me. People who are as passionate but also perhaps at times as anguished as I am over a project. If the client doesn’t share that passion they can’t be a client of ours.

Isn’t there a danger of losing critical distance when you only work with those who admire you?

It’s true that after a while we were no longer subject to the same critical force that we experienced at the beginning. People these days have a tendency to say, Wow guys, that’s awesome, what you’re doing is extraordinary. To insist that an idea is good – simply because it’s us who had it. And of course that can’t always be the case, we can’t always be the best we could be, and we need a certain honesty on the part of our clients. I love to be critiqued, to be pulled into questions, to be obliged to justify my thoughts and actions. That’s how you continue to evolve.

Nonetheless, you’ve worked with the same brands for almost 20 years.

I think that we work with the best enterprises in each category and I don’t see the interest in working with those less experienced (laughs). We’ve developed an almost familial relationship these people, we don’t lose time politicking or in endless discussions. We work together in an ongoing manner, it’s like we’re engaged in permanent research.

You will be unveiling a major urban installation at Design Miami in December. Can you tell me about that?

It’s called Nuage [Cloud] and it has grown out of a series of urban exhibitions we did in Rennes [capital of Brittany from whence the Bouroullecs originate] in 2016, called Rêveries Urbaines. We’ve designed a 100 metre-long, five metre-high pergola that will be permanently installed along the main thoroughfare of the Design District. It’s a shelter from the sun, but also a focal point for the community, a meeting space, a place for gardens to grow. We’re increasingly interested in urban programs – next year we’ll be unveiling six monumental fountains on the Champs Elysées in Paris.

A perfect reason to come back to Paris next year.

Ronan Bouroullec was In Conversation With… Stephen Todd