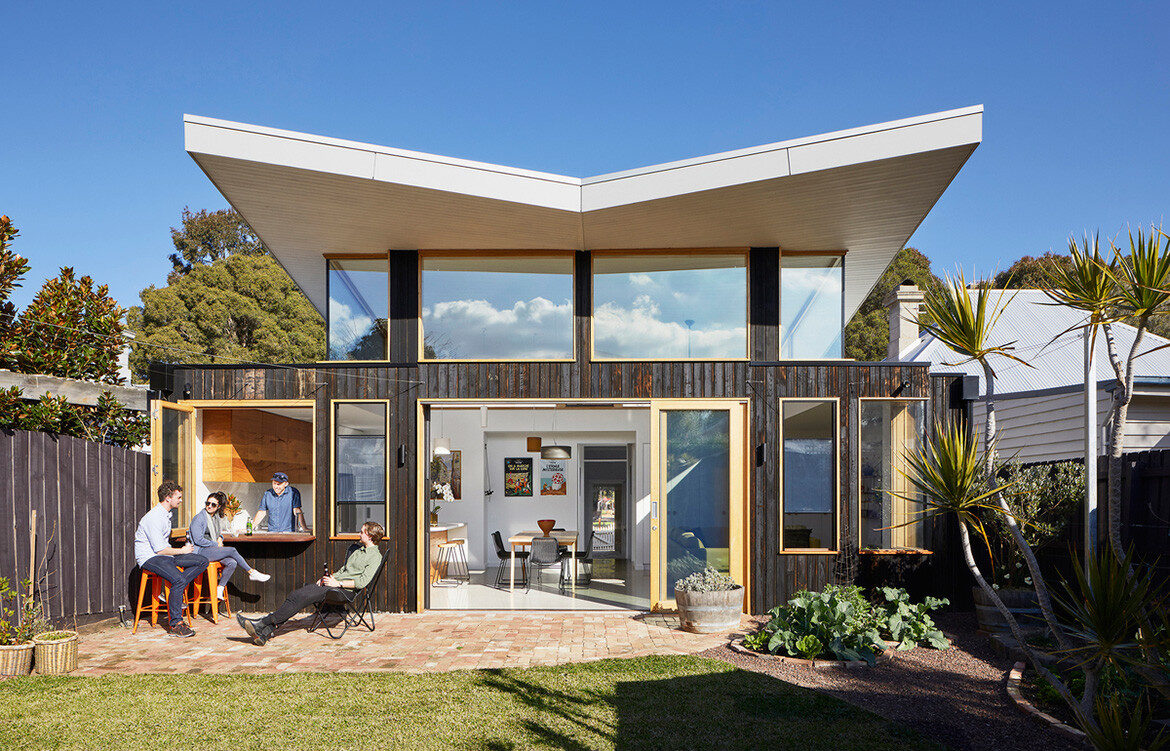 Good for people and the environment, passive solar home design improves the thermal comfort and energy efficiency of a home using the resources of the sun and wind.

Passive solar home design takes advantage of the sun and wind to illuminate, warm and cool interior spaces. Designing a house according to passive solar design principles can improve the performance, thermal comfort, energy efficiency and sustainability of a home. Not only can it reduce reliance on heating, cooling and lighting, but natural light and fresh air are good for wellbeing, making passive solar-designed homes a better choice for people and the environment.

A passive solar home is designed specifically for a site: taking orientation, climate, landscape and materials into account. We take a tour around Australia to see how four architects have renovated houses using climate-responsive principles.

The orientation of a house should take advantage of the sun for natural light and winter warmth. Locating living areas and windows to the north means spaces typically used most often will receive sun throughout day. (An exception is in tropical climates as they can overheat.)

Photosynthesis House, designed by Matt Elkan Architect, is located on a sandstone ridge nearly Manly Dam in Sydney and is the renovation of an existing fibro beach cottage with a two-storey pavilion addition. All rooms open to the north with extensive glazing and a skylight between the two halves of the house brings sunlight deeper into the home.

With the sun comes heat (up to 87 per cent of a home’s heat can be gained through windows), and while it’s beneficial in winter, it’s less desirable during hot summers. Eaves, awnings and screens can therefore shade windows in summer, while still allowing light in during winter when the sun is lower in the sky. At Photosynthesis House, sensor-operated Venetian blinds shade the northern and western sides of the house to moderate sunlight, a green roof extends over the skylight to cut high-level solar access during summer and louvres keep the home naturally ventilated.

On the other hand, up to 40 per cent of a home’s heating energy can be lost through windows, which is why quality glazing is important for energy efficiency and thermal comfort. Here, low-E (low-emissivity) glazing is used throughout, its transparent coating minimising the amount of heat that passes through the glass.

Of course north-facing living spaces are not always possible. And in a warmer climate like Brisbane, it means east- and west-facing rooms run the risk of overheating in the early morning and late afternoon from low-angle summer sunlight.

Dover House, designed by Shaun Lockyer Architects, comprises a classic Queenslander with a concrete rear addition that is very much influenced by the local climate. The house is located on an east-west site and glazing along the northern side is designed to absorb as much sun as possible, maximising light and heat gain during winter.

With living areas to the west, deep eaves, screens and an outdoor curtain help keep internal temperatures cooler by controlling solar access, depending on the angle of the sun throughout the year. Large openings allow for natural ventilation and louvre windows, skylights and large sliding doors also leverage light and breezes to enhance the comfort and efficiency of the house.

Natural ventilation helps keep a house cool by making use of outside air movement and pressure differences. Cooling breezes carry warmed internal air out of a building, replacing it with cooler external air and effectively lowering the temperature of interior spaces.

Boya House, designed by maarch*, is located in Darlington, east of Perth. The brief called for an extension to a late-1970s house that opened to the south and therefore had limited light. The addition, which houses the dining room, extends north into the bush and is surrounded by glazing on three sides, with sliding doors to the east and west for cross ventilation and breezeway louvres to north.

“The dual aspect of the house orientation (open on three sides) enables us to work with any configuration to cool the inside,” says Mark Aronson, director of maarch*. “As the easterly winds are strong at night and in the morning, we open the windows after 7pm in summer to flush out warm air overnight. The south-western ‘Fremantle Doctor’ [a vernacular term for the cooling afternoon sea breeze which occurs during summer months] reaches the hills by about 4pm in summer and we open up the western windows to let in these cooling breezes.”

Materials such as concrete, masonry, stone and rammed earth have high density that can be used to capture and store heat. Suited to regions with sunny days and cold nights, thermal mass acts as a heat bank, storing the warmth from the sun during the day and gradually releasing it in the evening as the temperature drops. Insulation also serves as a barrier to heat flow and can make a vast difference in the internal comfort and performance of a home.

In Melbourne, Glide House, designed by Ben Callery Architects, has high levels of thermal mass and insulation to moderate internal temperatures and reduce reliance on energy and power. The living spaces have a north-facing rear aspect for solar access. Concrete flooring provides thermal mass, receiving sunlight through the low-e glazing, and insulation in the walls, flooring and roofing provides thermal stability.

The sculptural roof has clerestory windows to capture the sun on the north side, and it dips to the south to protect from early morning and late afternoon sun. Louvres allow for breezes from the south side, which cool the interior and carry out excess heat from the thermal mass during the summer.

What Does It Mean To Live Off-Grid?