MAP is Relaunched at Schiavello 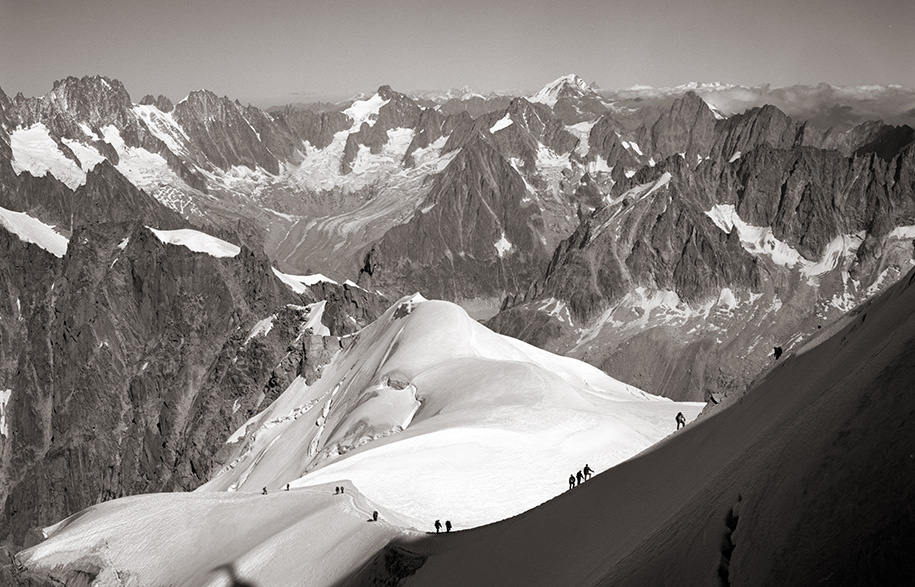 I stand in front of a large photograph. At first, it is difficult to determine what, precisely, has been captured. A universe of greys swirl and jitter. Vast expanses of white cut hypotenuses from one corner of the frame to another. Small deposits of black punctuate the foreground. But slowly out of this monochromatic symphony, the enormity of the scene I am viewing registers. Some miniscule figures are trekking across an impossibly levelled snowdrift. Behind, a mountain peak emerges from a low-hanging cloud of frost – and behind that, the pinnacle of Mont Blanc dwarfs that peak to a comparatively small hillock. The sky is infinite.

By Tom Goldner – one of Australia’s most intrepid photographers – this photograph is one of many in a series of twenty-two atmospheric black-and-white landscapes shot over two hiking expeditions in the alpine regions of France, Italy and Switzerland: Tour du Mont Blanc. And, while I gaze upon the richness of detail and gawk at the silent, still commotion of these mountainscapes, I am struck by how expertly Goldner has not captured the scene itself, but rather its constant state of impermanence.

Passage, then, could not be a more perfect title for the series. Equally across the language of mountaineering (not to mention those of French and English), ‘passage’ defines a state of transition. A state, which in Goldner’s own words, catalysed the project:

“The world around us is perpetually changing – ice melts, glaciers shift, weather changes and time passes. Nothing stays the same, neither we nor the spaces we occupy. [… In this landscape] you could stand in the same spot and one year later find everything had changed.”

In fact, everything did change. Passage emerges after years of working on the photographic and documentary project Photo for Freedom in third-world countries afflicted by local effects of global wrongdoing. That series harrowingly captures the individual stories of children indentured to slavery and communities in anguish throughout Africa and Asia.

After spending years dedicated to raising funds and awareness for anti-trafficking and relief organisations through Photo for Freedom, Goldner has returned to an early love for the strenuous yet immersive art of analogue photography and traditional darkroom printing. Though many believe this photographic method – now in its sesquicentenary – is swiftly vanishing, Passage’s haunting glimpses of the human touch even in the world’s most secluded locations (I’m particularly reminded of a small cabin at the foot of a desolate crag) marries perfectly with Goldner’s very hands-on creative process.

Shot on hand-developed medium format film, individually tinted and toned by Goldner himself, the amount of time lovingly dedicated to the work is simply astounding. Exhibiting at The Fox Gallery in Melbourne’s Kensington – run also by Goldner – Passage marks a milestone for the tradition of darkroom printing and the history of photographic practice, today.

During a holiday in 1817 to these very same mountainscapes, the English poet Percy Shelley wrote that Mont Blanc inspired a ‘secret strength of things/ Which governs thought’. Exactly two-hundred years later, that ‘secret strength’ still impels. You see, in our current world of ultra-connectivity – our world of hyperactive technology, social media, infinite platforms for ‘living’ – simply just being is brought into an absurd urgency. In this, our attentional apocalypse, time and art have been harnessed for fast, digestible and (unfortunately, sometimes) over-simplified consumption. Goldner’s arduous sensitivity stands forth, here, forces me to stop, wash my eyes of the black mirror of my phone’s screen and contemplate the discrete elegance and poised anger of the natural landscapes that surround us. The work itself stands as an overdue reality-check in considering that right now could be the beginning of the end of our capacity for such attention – if we fail to act. This isn’t photography as a way of seeing. Instead, here is seeing, itself.

Originally published in McGrath magazine, May 20, 2017.