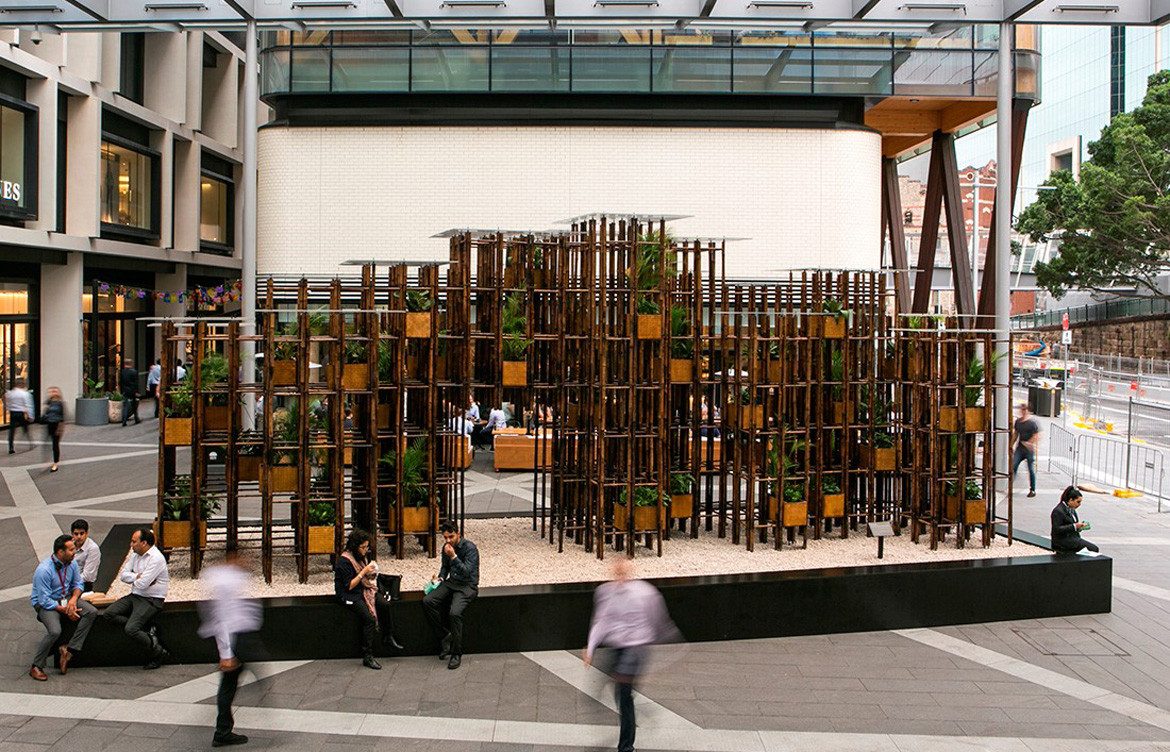 If the agile workplace revolution were to have an Australian mascot, it would likely be Sydney’s Barangaroo. The previously non-existent inner-city suburb was taken on as an ambitious government project in 2012 and has since become known for both its heavy-hitting commercial occupants and the striking buildings they’ve come to reside in.

The architecture of Barangaroo is eclectic, to say the least, but the diverse design styles that can be witnessed walking through the precinct – delivered in large part by Roger Stirk Harbour + Partners – share a common thread of futurism, underpinned by a commitment to sustainable technologies.

In this sense, the form of Barangaroo’s first architecture pavilion is surprising. Erected earlier this month, the pavilion, called Green Ladder by Vietnam’s Vo Trong Nghia Architects, harks back to a more place-based and nature-oriented form of architecture, which juxtaposes sharply with the slick glass and metal of the harbour foreshore.

Another surprising aspect of the commission: it’s not its first iteration. Green Ladder was first commissioned back in 2016 as the fourth of the Fugitive Structures pavilion series, led by the Sherman Centre for Culture and Ideas (SCCI). Unusually for an architectural pavilion – a form that is synonymous with impermanence – its Barangaroo reincarnation is its third.

“We asked [Vo Trong Nghia] to create something that was flexible enough to go to two sites,” says Dr. Gene Sherman, founder of SCCI. “Every site is different, as we know, and now it’s gone into three sites. It’s had to be adapted a little everywhere it’s gone. He developed the concept based on adaptability, and Green Ladder came out of that.”

Green Ladder looks as it sounds. The pavilion is made up of a series of ladders made from bamboo that have been soaked in the rivers of Vietnam for three or four months – a technique that gives the already durable material added strength. These ladders are bound together with tough ropes of grass, and strung with hanging flower baskets. These baskets have changed their contents in response to each subsequent context – native flowers in Sydney, and bougainvillaea in Brisbane, where Green Ladder had another of its incarnations as the centrepiece of the Asia-Pacific Architecture Forum (APAF).

“I grew up in Africa, so it was recognisable. Not in terms of the structure itself, but it had the same taste of materials from the environment [and] handiwork by well-trained craftspeople who took a pride in their work,” says Gene.

“Barangaroo has all of these top-tier experts who I don’t even remotely have access to, and they went out to the site where we were storing [Green Ladder] and just said the bamboo needs some TLC, and the roof – a glass roof – needed to be replaced, but that wasn’t a difficult thing. [The Barangaroo Delivery Authority] organised the transport and they put it in a location which I chose. The shape was slightly adapted, but not much. We angled it slightly [on its rectangular lot] and there are ledges around it that people can sit on and have their lunch, underneath the greenery.”

While at first, the structure seems at an aesthetic juncture with the rest of Barangaroo, Green Ladder is, in fact, a conspicuous representative of the precinct’s commitment to sustainability, and to design that is different.

“Our ambition is to deliver a distinct and unique voice within the broader [landscape] in Sydney and Australia, animated through creative and engaged partners such as the Sherman Centre for Culture and Ideas,” says Barangaroo executive director, Sandra Bender, by way of a press release. “Our partnership with SCCI in the delivery of Barangaroo Structures will provide an opportunity for our visits to explore emerging architectural ideas with innovative sustainable materials.”

“Many more people will see [Green Ladder] in Barangaroo than would ever have seen it here, or in Queensland,” concludes Gene. “They’ve done a beautiful job in putting it up – the ceiling is gleaming, the bamboo is shining, the whole thing looks fabulous!”

Take a look at another project by Vo Trong Nghia Architects that brings in a little nature, The Atlas Hotel.