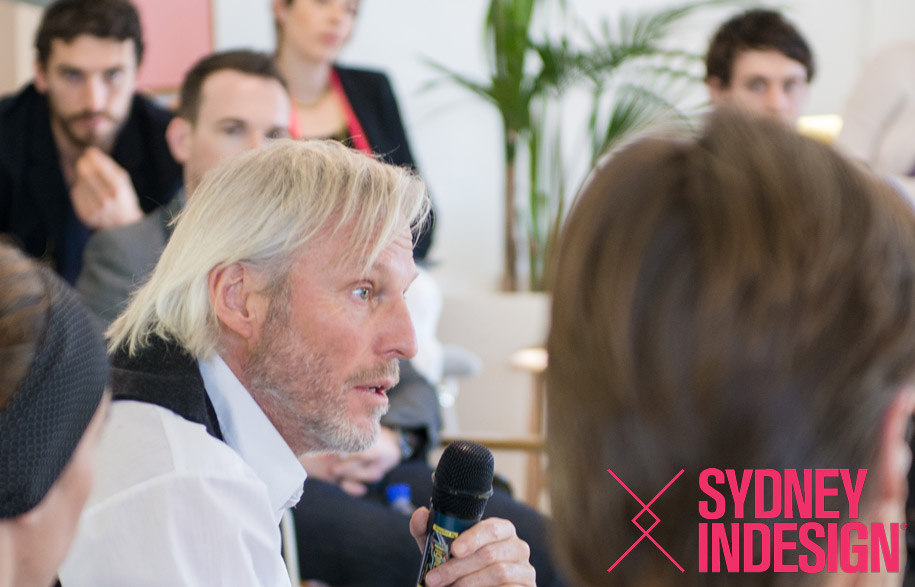 Making its debut at this year’s Sydney Indesign, the Habitus LiveLife Series provided a casual yet sophisticated forum for the discussion of issues central to residential architecture and design.

The first talk in the series was an intimate affair hosted at the Corporate Culture showroom. Titles ‘Ant Heap or Home?’ the discussion explored the issues surrounding multi residential living in the Australian context. Incisive commentary from Architect Tony Owen on the realities of economic pressure and sustainability regulation (which he argues is already highly developed in NSW) was balanced by the extensive industry knowledge of Crown Group developer Tim Campbell. Residential architect Tom Ferguson shed light on the intricacies of negotiating council in inner city projects, while UrbanGrowth NSW‘s Vy Nguyen highlighted the importance of good design and access to amenities for new developments.

The Friday afternoon instalment saw Habitus Editor Paul McGillick guide a somewhat more narrative discussion on ‘Placemaking in Australia’ at the Jardan showroom. The conversation opened with a powerfully evocative anecdote from Architect Peter Stutchbury recognising the manner in which indigenous Australians have layered cultural significance onto the landscapes they inhabited. Following from this, Architects Carol Marra and Fergus Scott extrapolated the topic to include their work in tropical climes and the Australian environment, respectively. From the need to camp out on a site to get a sense of place before designing a home to commentary on the importance of recognising resource pressures in an area, the discussion offered enormous insight into how architects can, and should, employ their sensitivity to create dwellings that harmonise with their surroundings.

Comedian, radio-presenter and resident of a 1950’s modernist home Tim Ross’ humorous observations enlivened the tone of Saturday morning’s discussion on Adaptive Reuse, hosted at the Ke-Zu showroom. Despite the laughs, the analysis of the cultural, economic and practical consideration associated with conservation and adaptation gave a three-dimensional understanding of an issue that varies enormously between instances. The broad knowledge Historic Houses Trust’s Caroline Butler-Bowdon lent authority and scope to the conversation, whereas the project-specific examples of Architect Bruce Eels explored the particularities of designing within heritage guidelines.

Last in the series, the Saturday afternoon discussion of ‘Living in the Suburbs’ brought thoughtful discourse to the otherwise bustling Spence & Lyda showroom. Passionate advocacy for greener, more sustainable suburbs from South Australian developer Adam Wright provided many talking points, challenging assumptions about economic viability. The informed confidence of Architect Hannah Tribe regarding the evolution of suburbs throughout English and Australian history and the importance of letting architects and designers guide their future raised serious questions about who should be in charge of shaping our cities, while Designer Domenic Alvaro’s considered contributions illuminated the alarming trends of growing homes and shrinking gardens across the country.

Overall the LiveLife discussions offered thought-provoking windows into their respective topics, giving Sydney Indesign-goers a chance to punctuate the frenetic tours of showrooms with some casual yet informed discourse.