At Home in the Hills: Little B.. 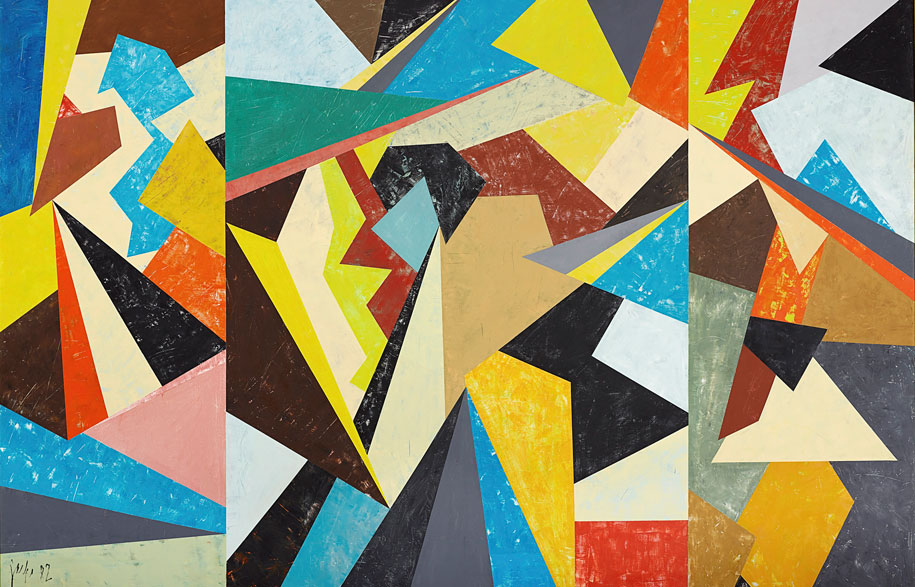 Above: Kentish fire and heavy boots 1982

Robert Jacks was one of the most mercurial artists Australia has ever produced. This wondrous exhibition celebrates a lifetime of work.Sadly, Jacks did not live to see it. He died at the age of 71 just a few weeks before it opened. But he did live long enough to decide which pieces should go in it.

The show is as much an installation as an exhibition. And this is as it should be. Because there was always something theatrical, something magical about Jacks’ work. He was always experimenting. Trying things out. Playing with materials. His art was like a laboratory. And like an alchemist, he kept exploring what he could do with a fairly limited range of raw materials.

He never repeated himself, even though certain images and marks recur throughout his career. He was just 23 and already something of a prodigy when he left Australia in 1967 to head for New York, the mecca of contemporary art. Unable to gain entry to the U.S., he went to Toronto for two years, before finally getting to NYC ─ where he was mugged on his very first day.

Always regarded as an abstractionist, in fact Jacks’ imagery derived from the world around him. Throughout his career, the shape of the guitar ─ a homage to Picasso ─ provided him with good workable stuff.

But perhaps even more important was the cityscape of New York and the fractured, edgy landscape of Mexico where he spent some time. The main abstract form to run through his work was the grid. Jacks was strongly influenced by minimalist art, prominent during the 1970s, and its liking for reducing forms down to mathematical simplicity.

Jacks could work on any scale. The ‘cityscape’ oil paintings of the 1980s were major statements, conveying the jagged skyline and compressed energy of New York, although he had returned to Australia by then.

Transit of shadows in nocturnal predominance no. 2 1987

But he did some luminous watercolour works, sometimes on a large scale as well. His small-scale etchings and pencils works are among the delights of the exhibition. No Australian artist was as urbane or as invariably well-dressed as Robert Jacks. No artist was as generous. And in the hothouse atmosphere of the art world, no one ever had a bad word to say about him.

Retrospectives often end up showing the limitations of an artist. This one shows an artist constantly re-inventing himself.