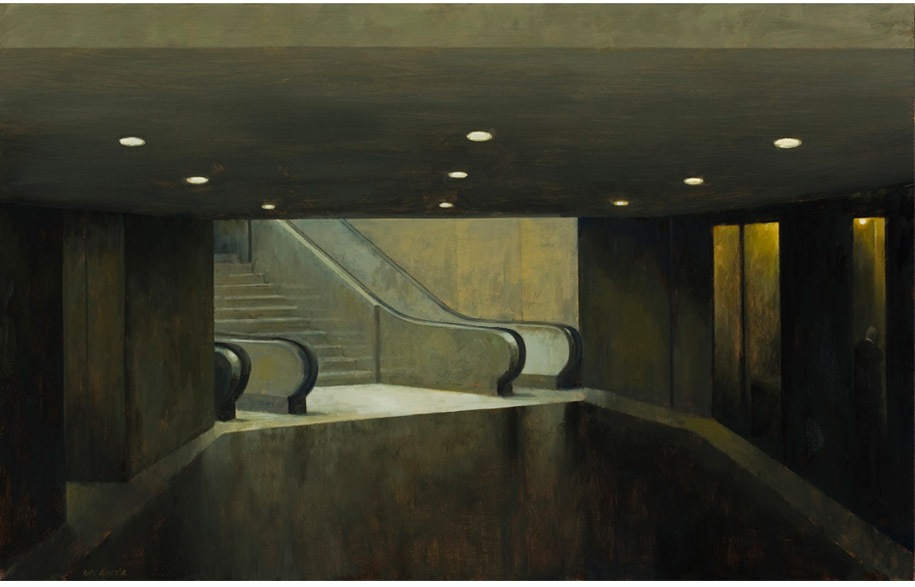 One of Australia’s most distinctive contemporary artists, Rick Amor is best known for his images of post-apocalyptic
scenes where solitary figures are depicted in a landscape of monumental buildings, decaying structures, abandoned
freeway off-ramps and vast coastal bays.

Amor’s compelling paintings, drawn from observation and inspired from the deep recesses of memory, resonate with a brooding disquiet. The upcoming exhibition will feature new paintings that continue Amor’s investigation of a number of key subjects in the artist’s oeuvre.

Amor masterfully manipulates tonal elements in his paintings by predominantly using dark, striking hues, which suggest a mood of melancholy, as seen in Terminal (2010) (above left), where ominous clouds swirl with sfumato effect behind an immense, towering rocky outcrop dwarfing a lone walking figure. The viewer is left with a sense of unease as Amor suggests a menacing storm is approaching.

Amor’s dramatic paintings capture poignant, still moments, and often imply that behind mundane realities, something else is lurking. He states: “One of the main themes in my work is the passing of time, the vanity of human wishes, things pass, things decay and the passing of time seems to have an emotional resonance with me. I keep on returning to it over and over again”.

Amor exaggerates the enormity of natural land formations, structures and buildings. Lower Manhattan (after the hurricane) (2012) employs his use of spatial illusion as a distressed figure is dwarfed by the commanding structure of the Brooklyn Bridge, surrounding buildings and debris. The melancholy, quiet moment is amplified with the use of dramatic shadows, strong architectural tensions and an encroaching dawn.

There are few Australian artists today who achieve realist painting with incredible intensity and originality, or who produce paintings of such clarity and refinement.