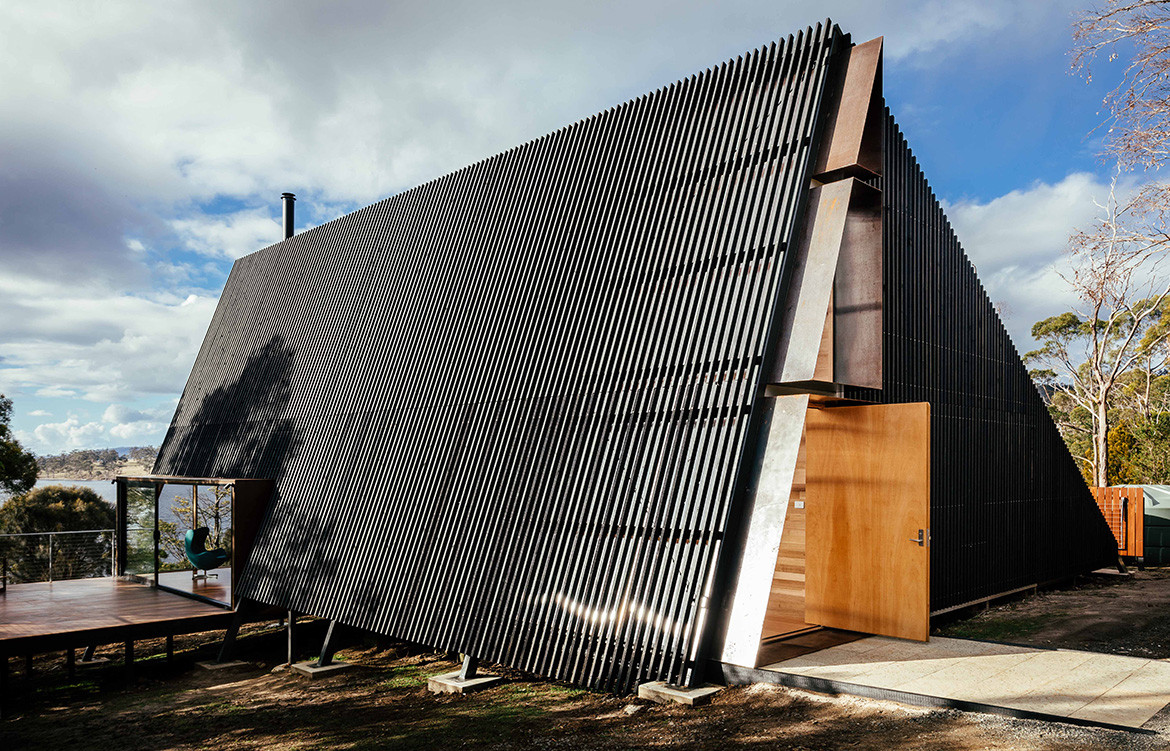 A holiday house for family and friends on Tasmania’s idyllic Bruny Island celebrates the character of the island and offers a total change of pace for the owners.

If you live in inner suburban Melbourne and need a regular spring clean, Bruny Island (less than an hour by car and ferry from Hobart in Tasmania) couldn’t be more perfect. The island is a 15-minute ferry trip from the main island of Tasmania and was named after the French explorer, Antoine Bruni d’Entrecasteaux who, in 1793, surveyed the Derwent River and the channel (also named after him) separating Bruny Island from the mainland.

Bruny Island is alternately dramatic and enchanting and nowhere is this more the case than Apollo Bay, just a short drive from the ferry terminal. The house has water frontage and enjoys sensational views across the bay and beyond to Hobart and Mount Wellington. The client wanted something completely different from his family’s customary lifestyle and something closely connected with its coastal environment. He had worked with architects before and was relaxed about leaving it to Dock4 Architects to develop the driving ideas.

There was an existing three-bedroom Cedar shack on the site and architect, Richard Loney, says that the concept for the new house was driven from the start by the dilemma of “whether it was worth keeping the existing fabric” of what was realistically a nondescript structure. In the end, a lot went, but the architects retained the flooring, the stud walls and footings.

The new 125-metre-squared house consists of the old shack expanded with spaces alongside, in front of and on top – all wrapped in an angled lightweight steel frame that hints at a tent structure, thus signalling that this is a house that is not imposed on its site, but an integral part of it. All the new spaces – the living/kitchen/dining area, two external decks sharing the same contour, and the bedrooms above – have a strong connection to the outside and the house itself is filled with light. The light comes from extensive glazing but is also filtered through the polycarbonate screen that seems to almost casually lie against the side of the house on the entry side – the entry being a corridor that runs down the side of the original shack to the living area. From the corridor, stairs lead up to a mezzanine-like level containing three bedrooms.

Down the entry corridor, a suspended fireplace draws the visitor towards the living spaces. Here, ample visual connections; the external decks on either side of the living space; a long bench seat extending from inside to outside, together with the extended kitchen, all reinforce the sense of inside and outside being one.

Almost as a relief from this, there is a lounge tucked away behind the kitchen, a private nook raised up a little from the living space.

The achievement of this house is that it combines the uniqueness of its rural context with the relaxed comfort and amenity of a completely modern home. The material palette helps to generate this happy union – light in tone and modern in character inside, while outside the darker tones resonate with the surrounding bush and marinescape. 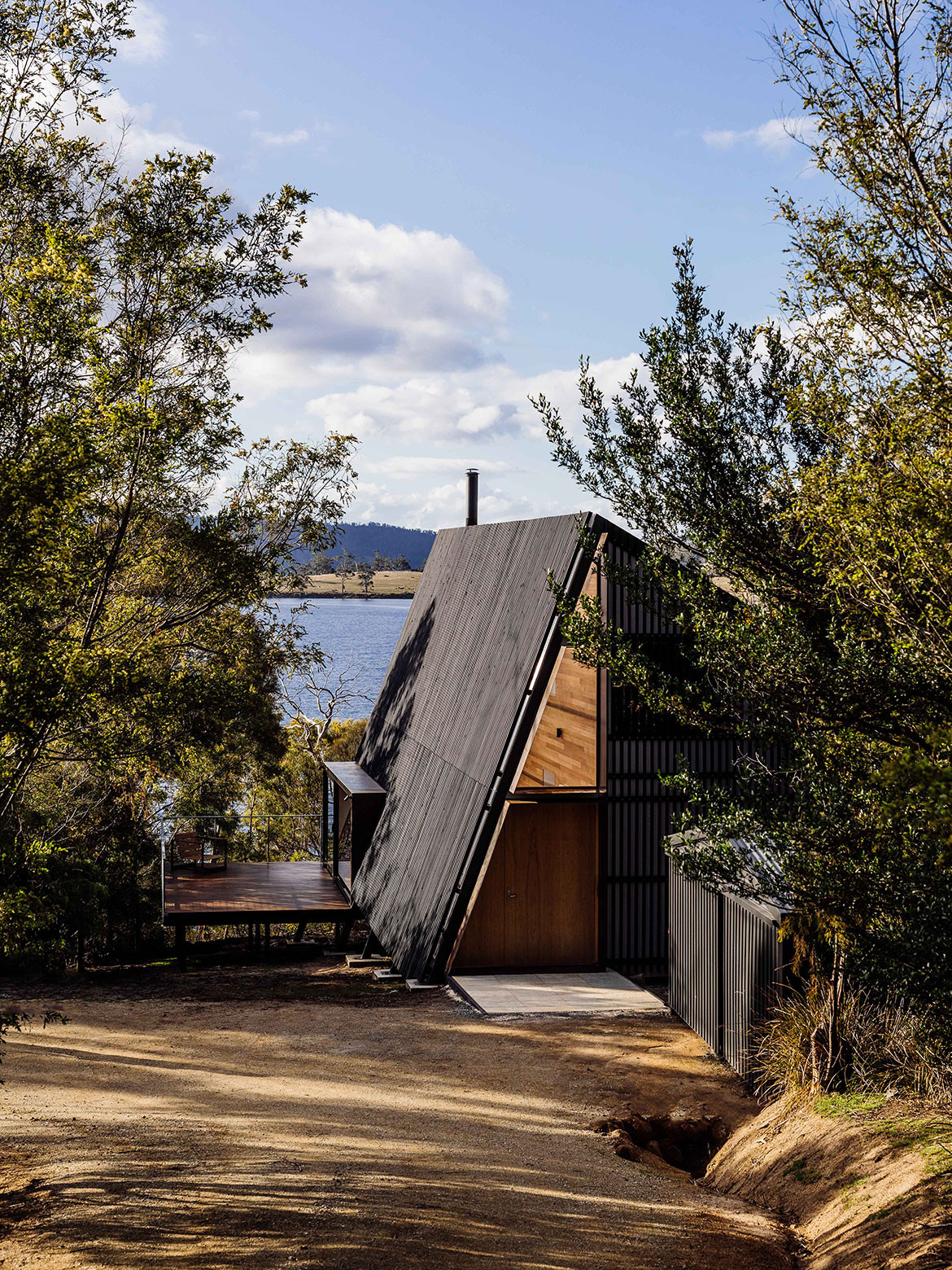 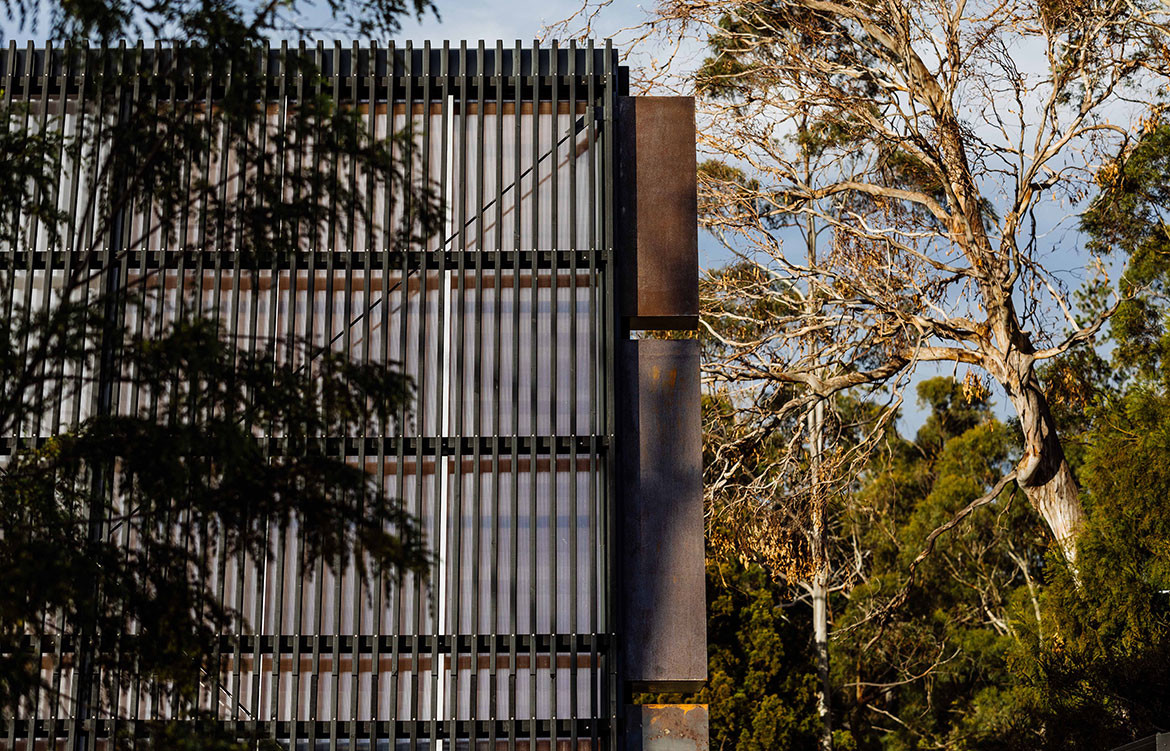 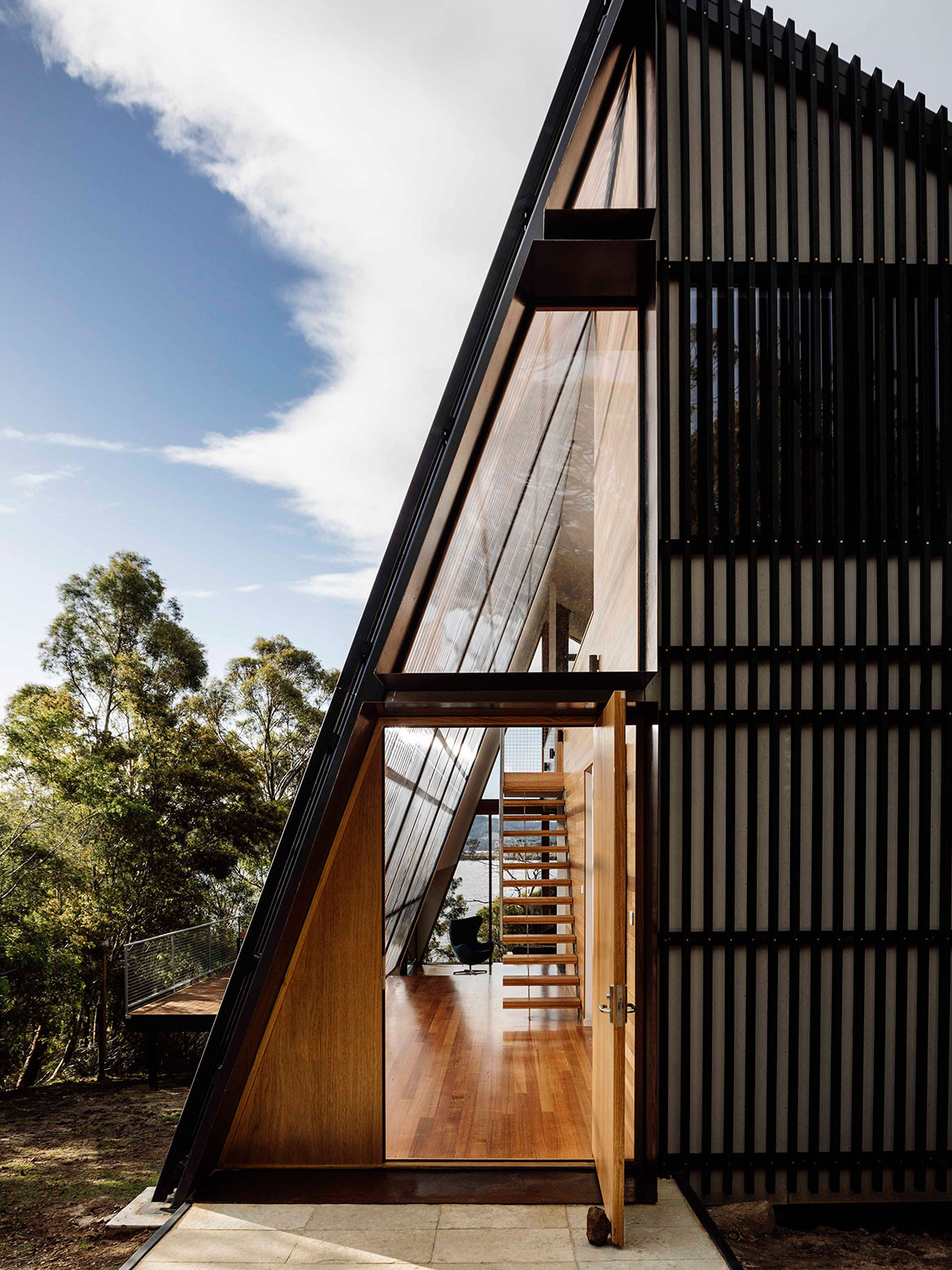 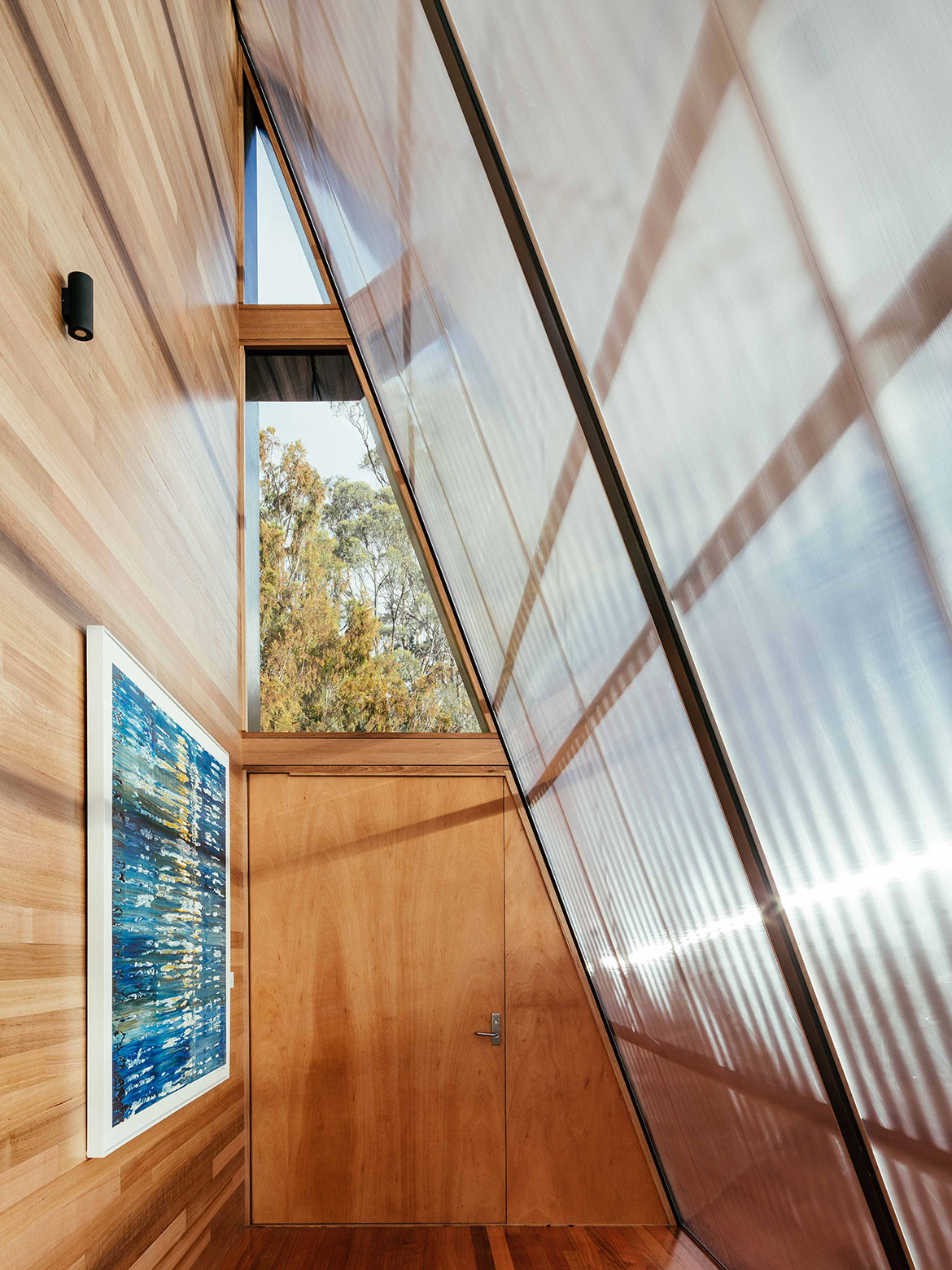 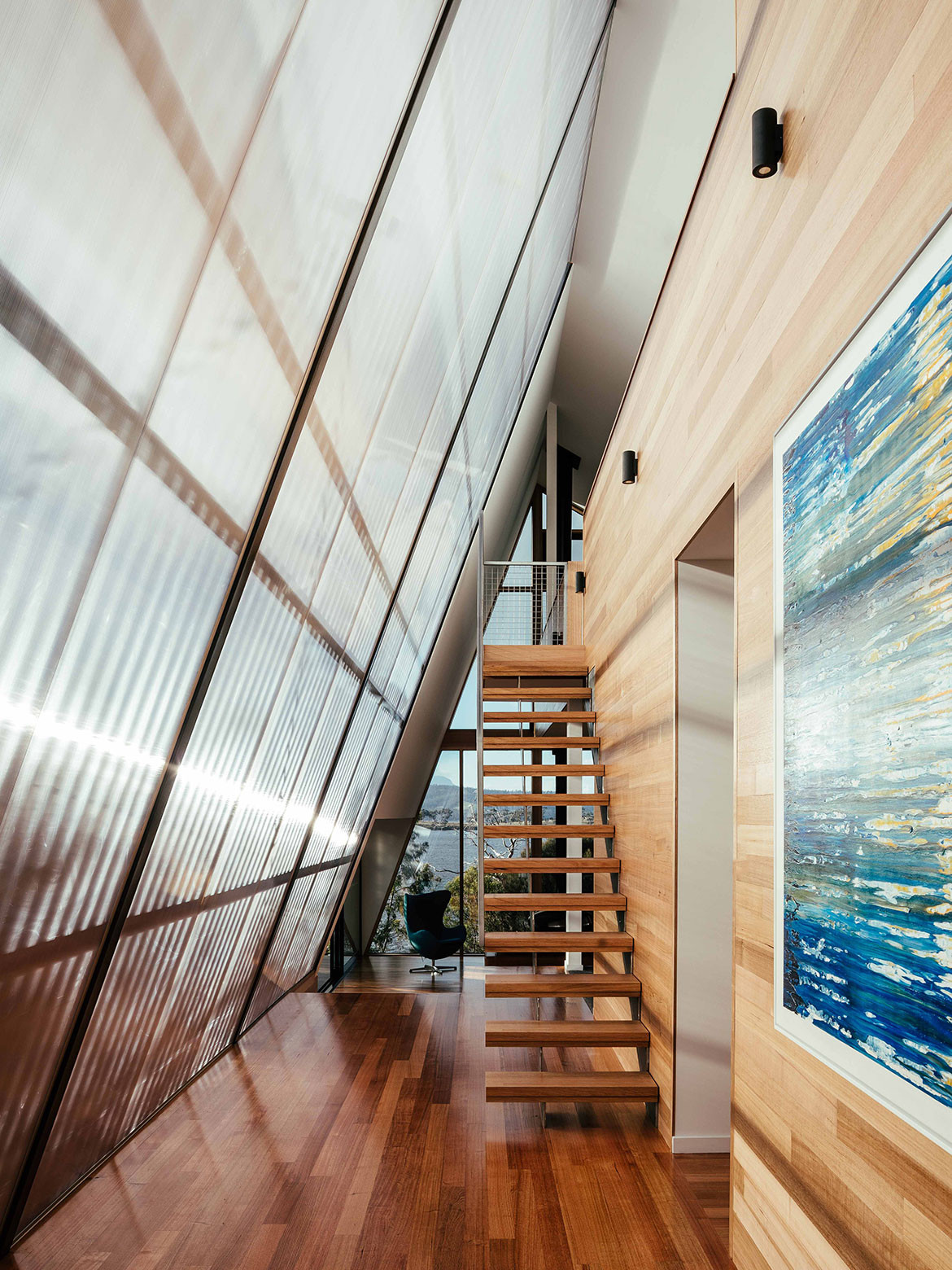 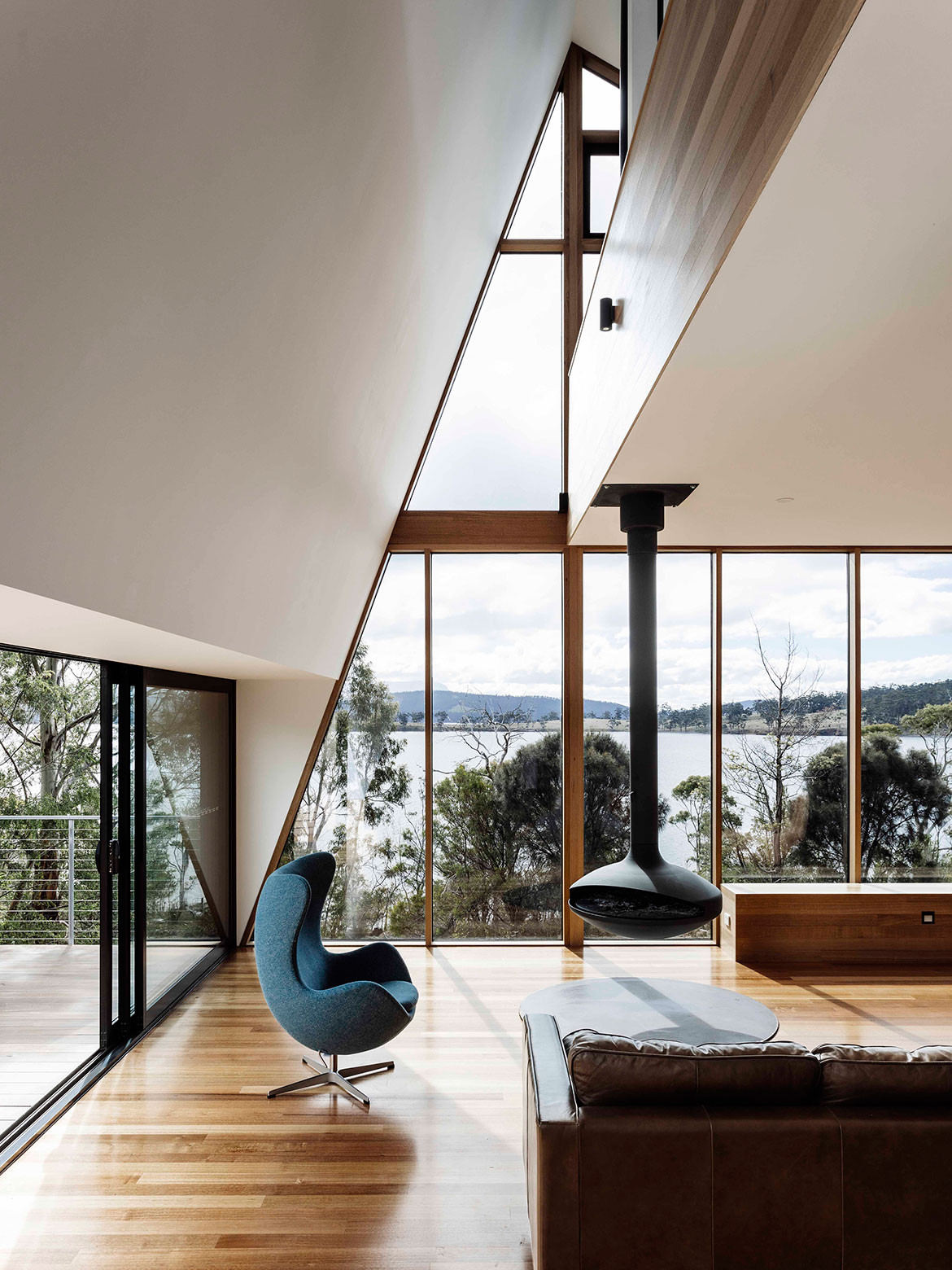 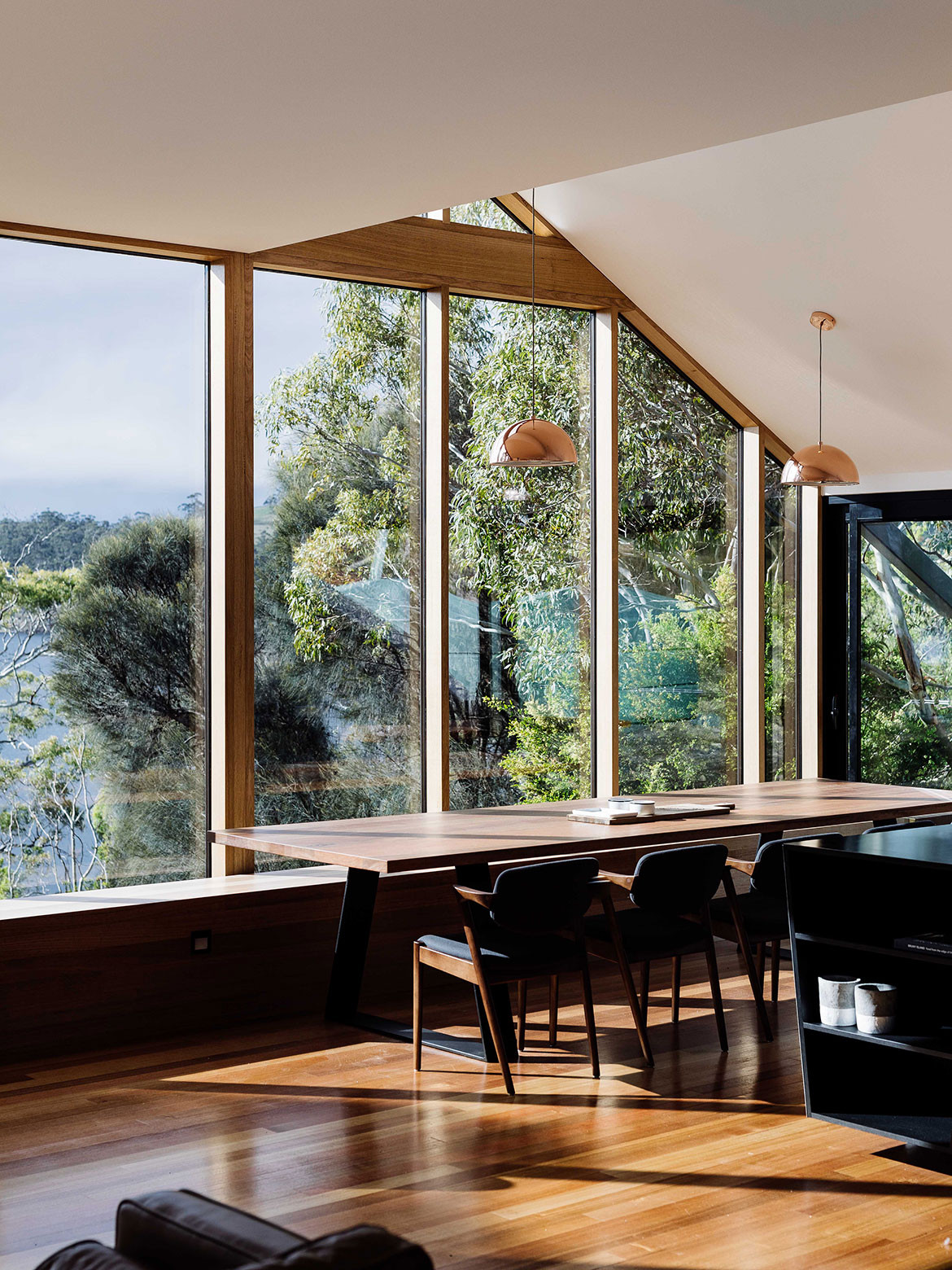 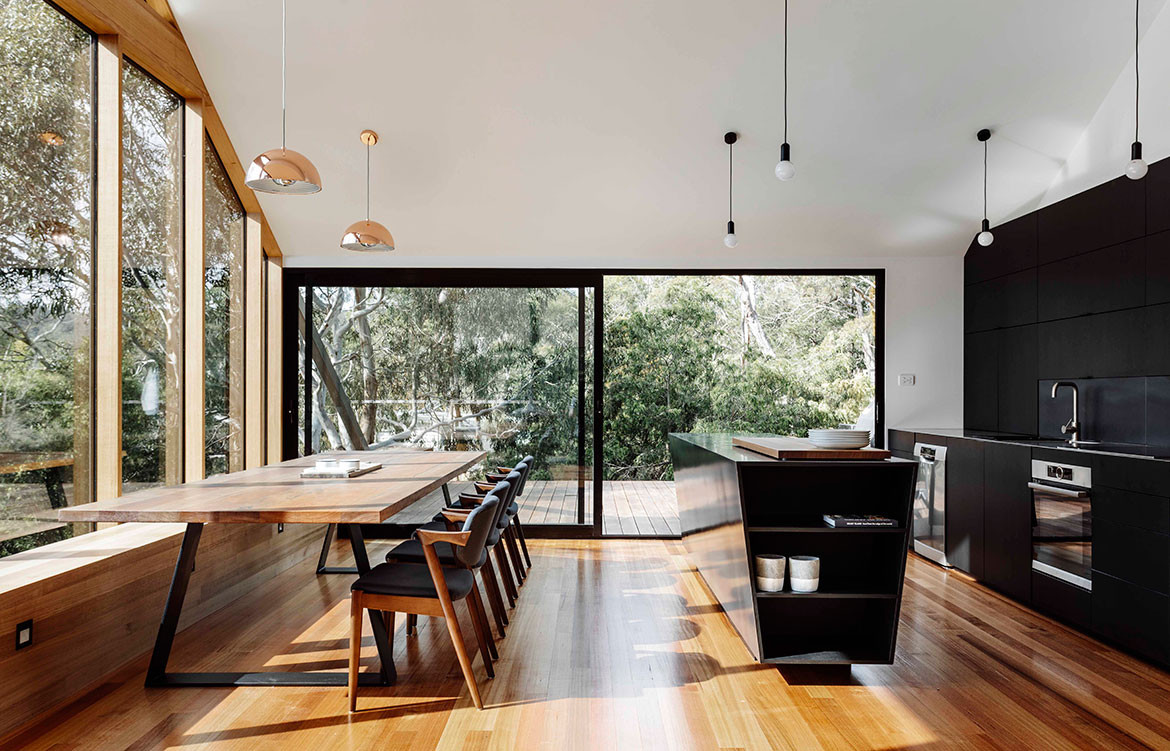 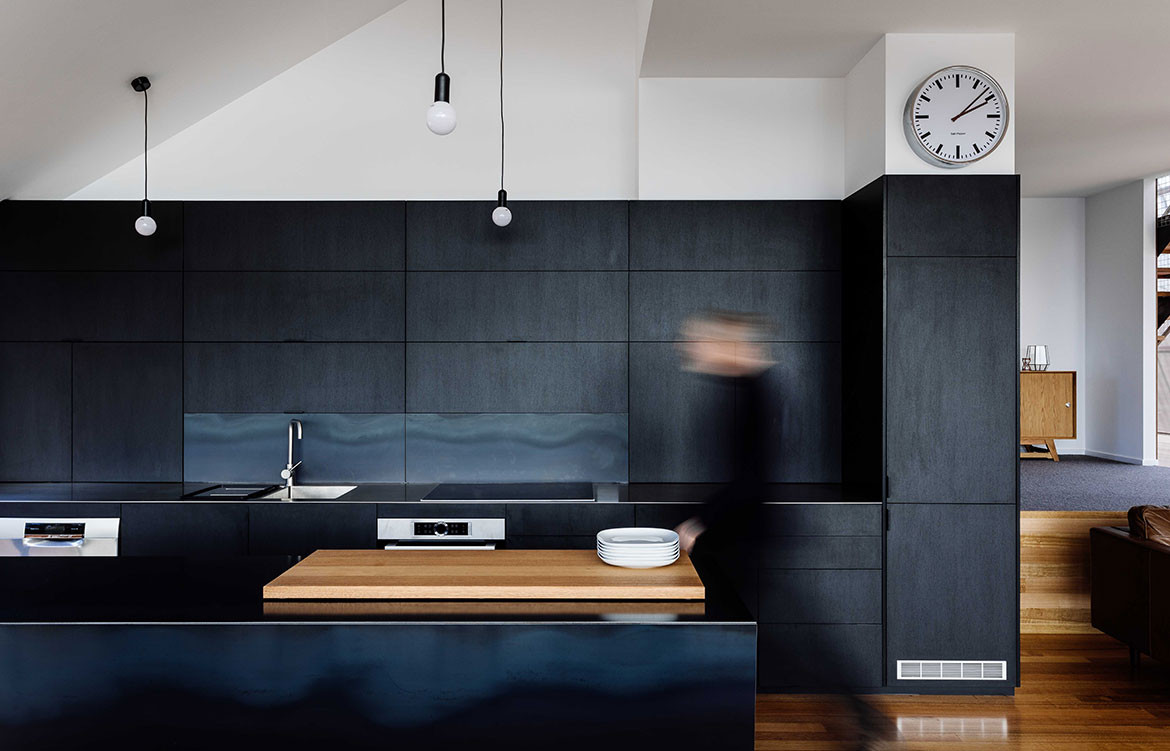 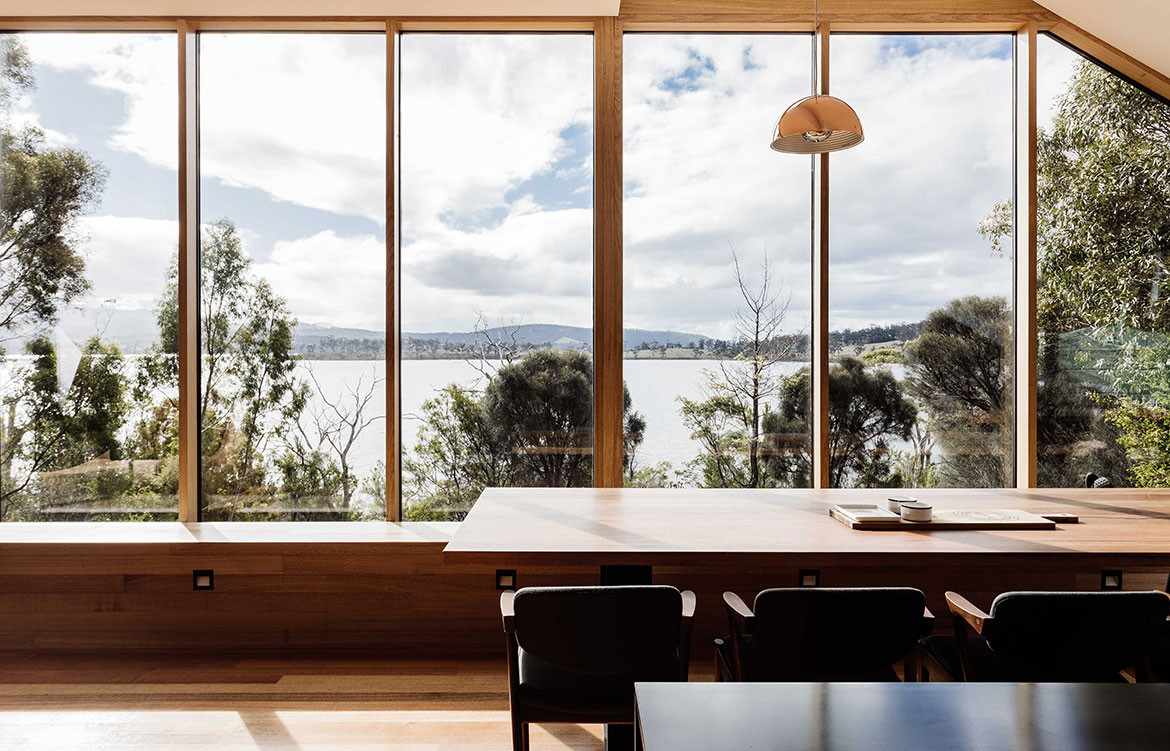 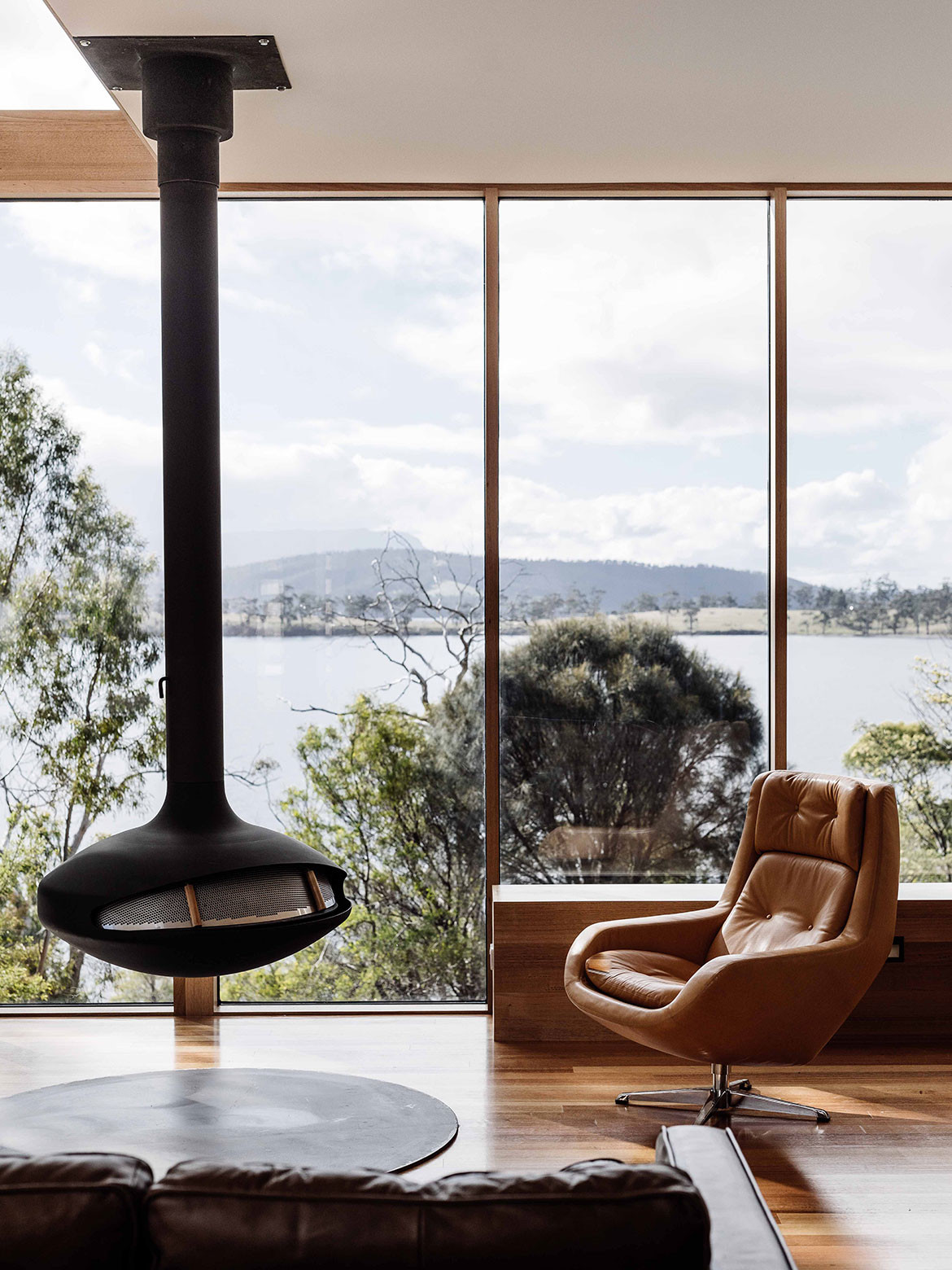 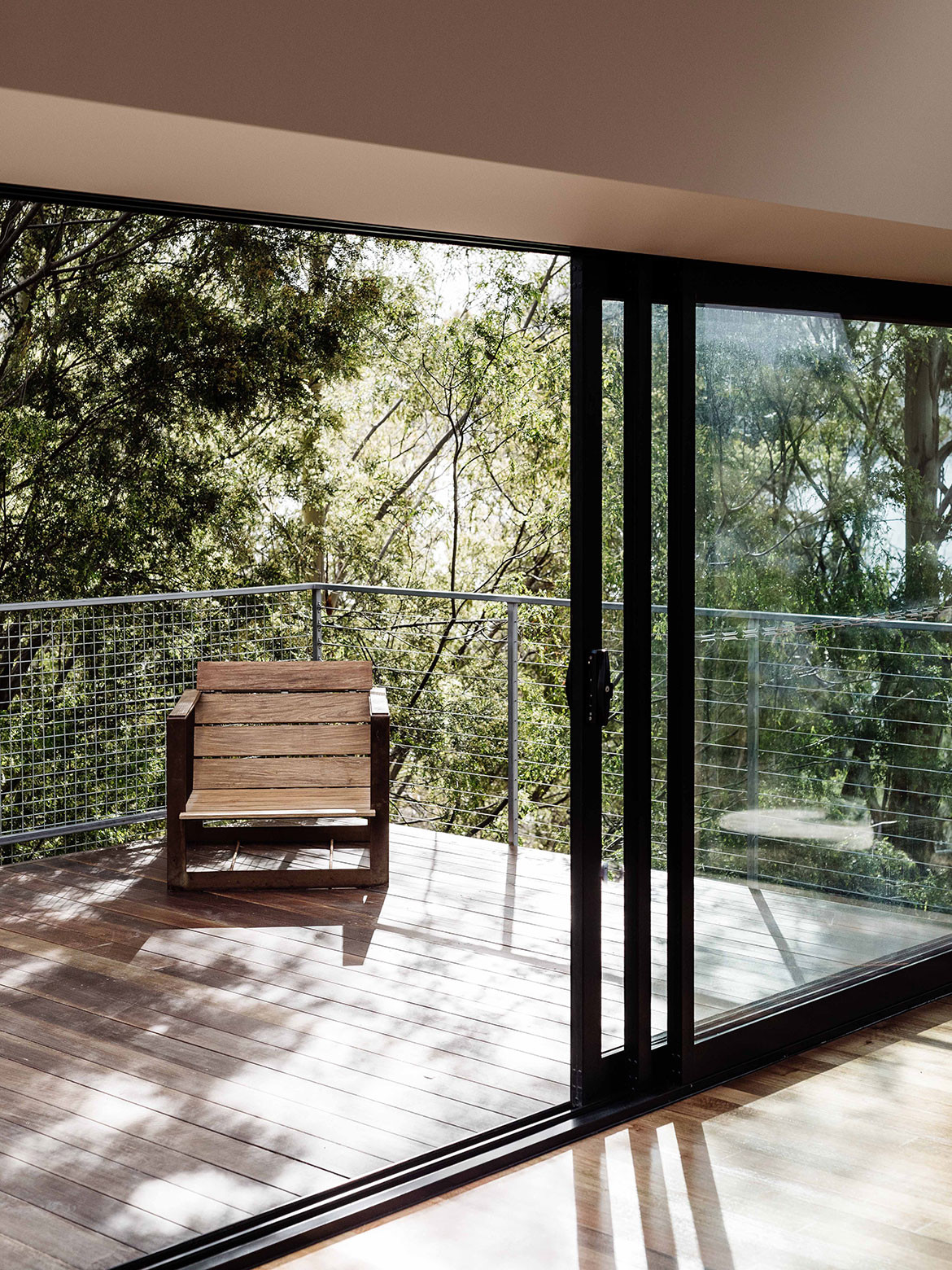 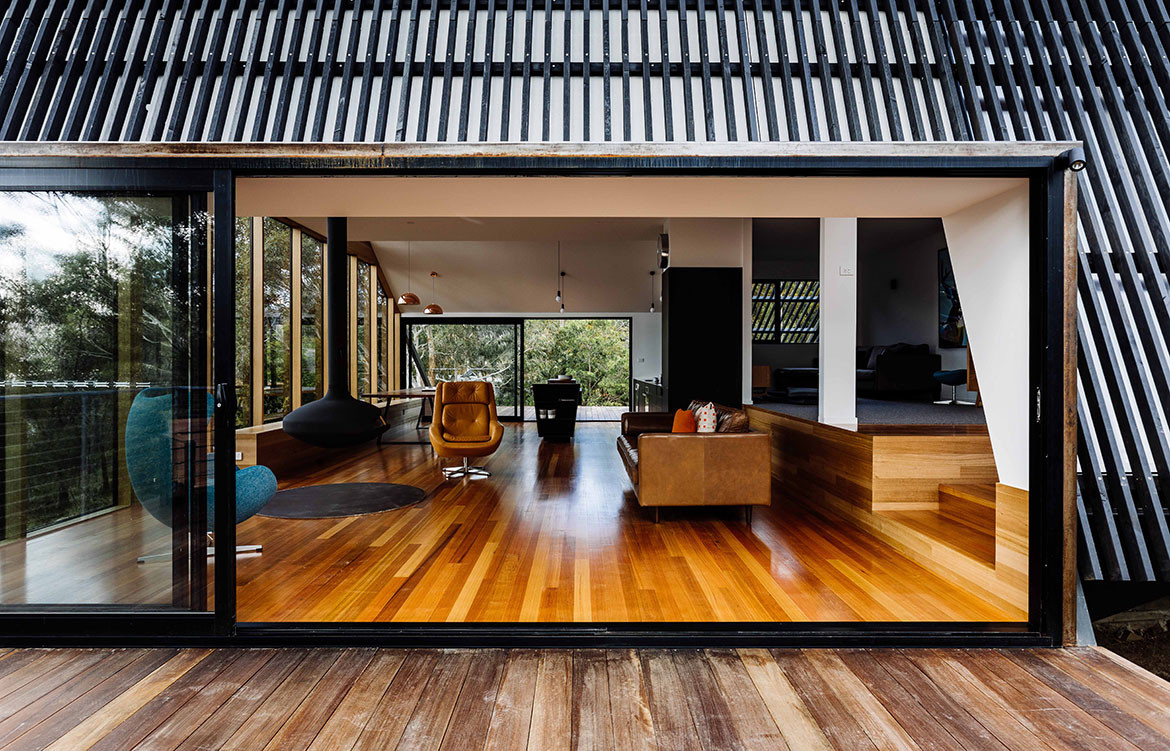 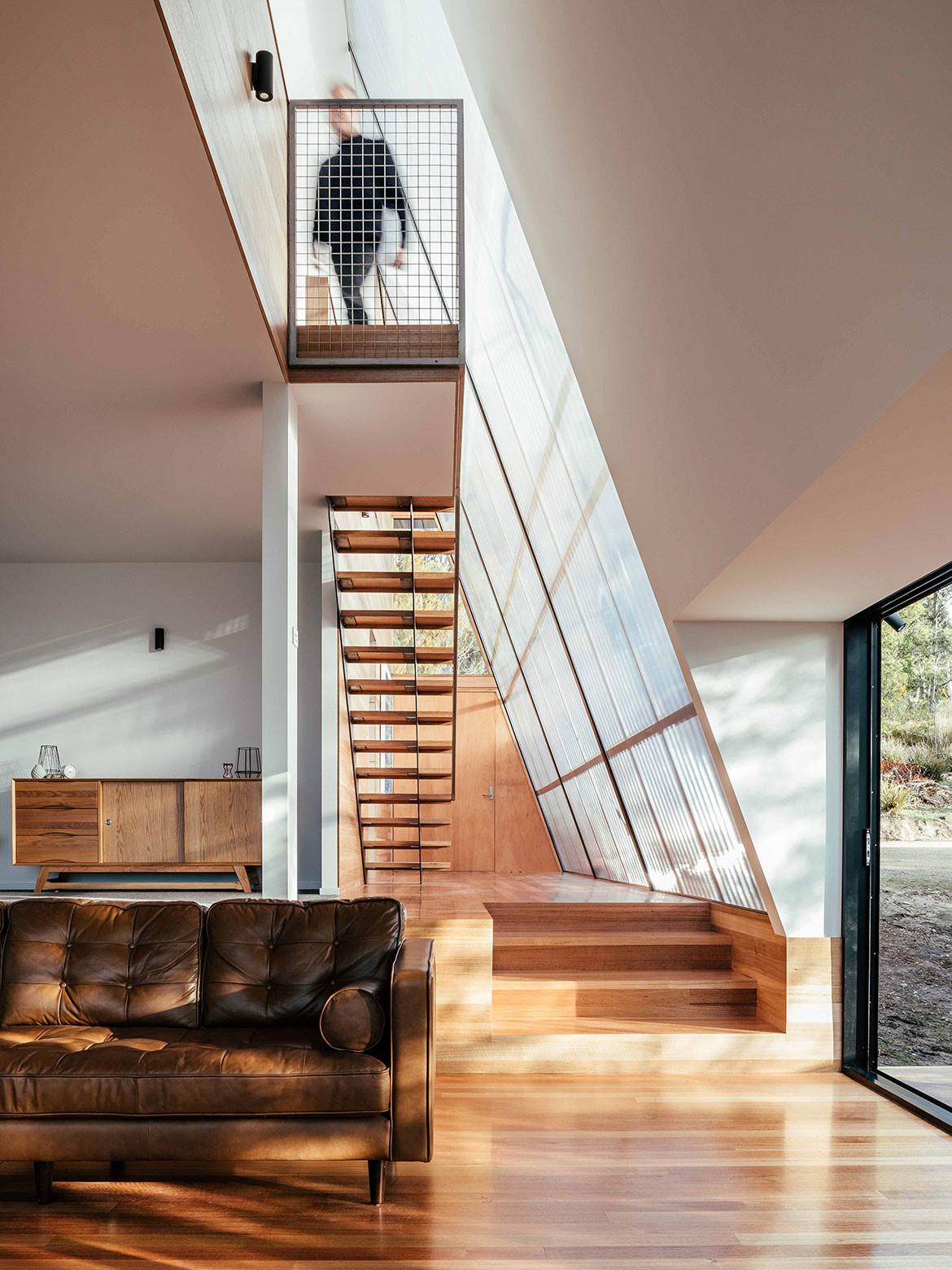 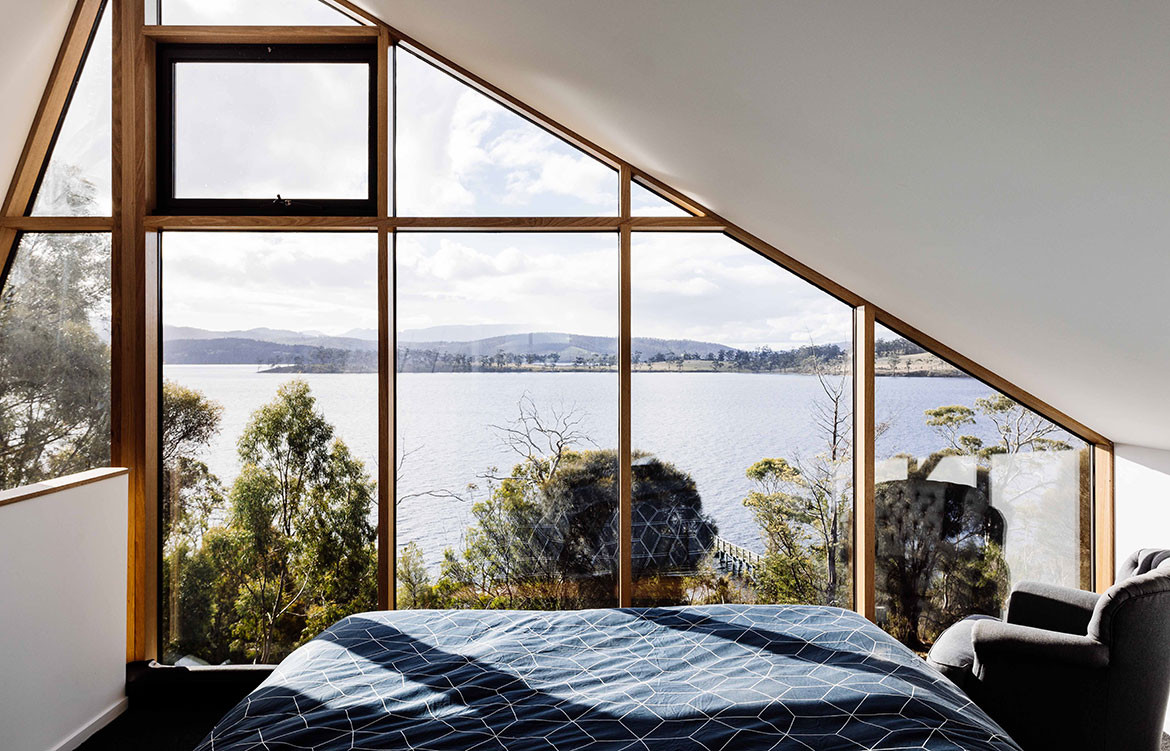 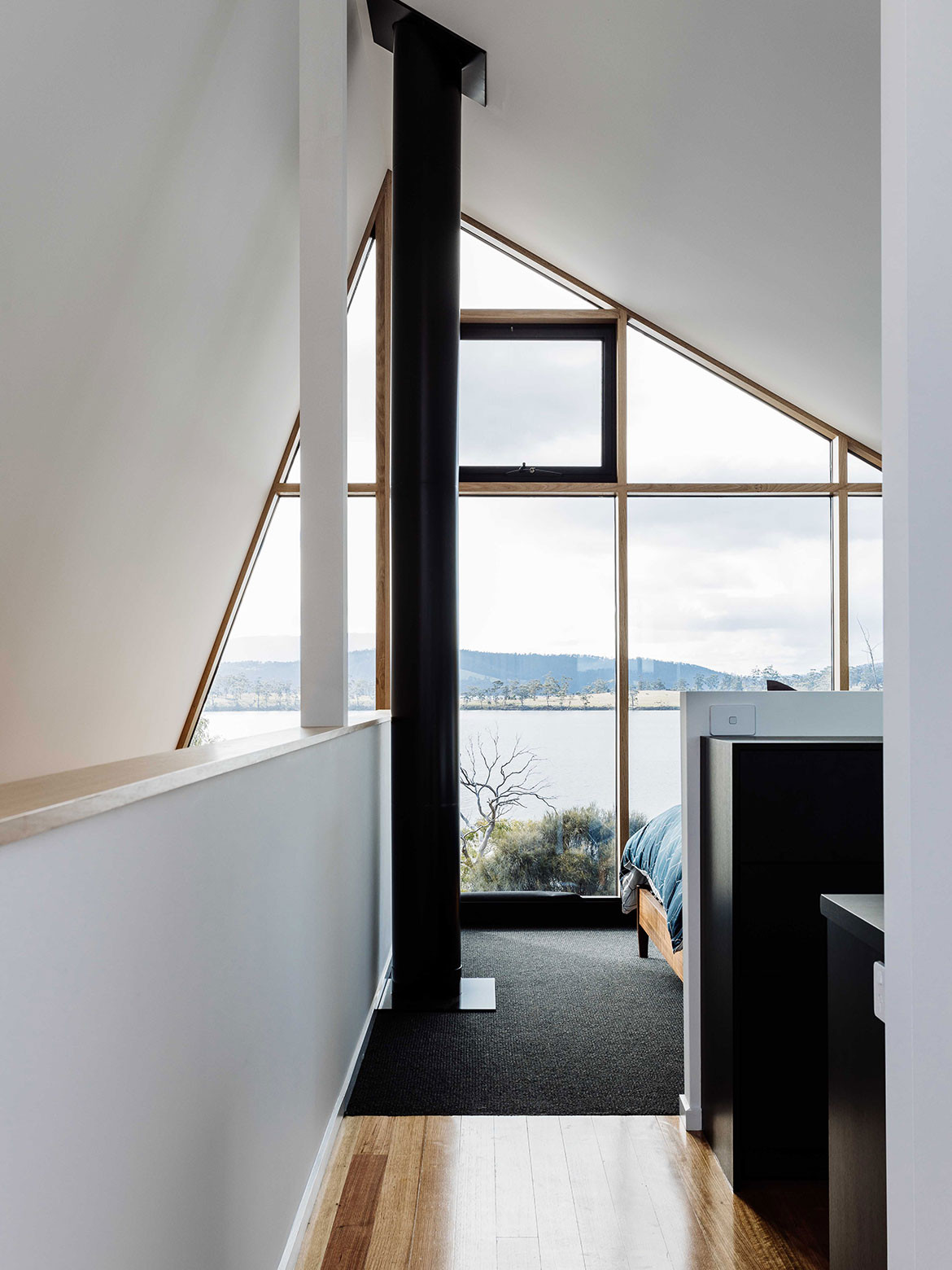 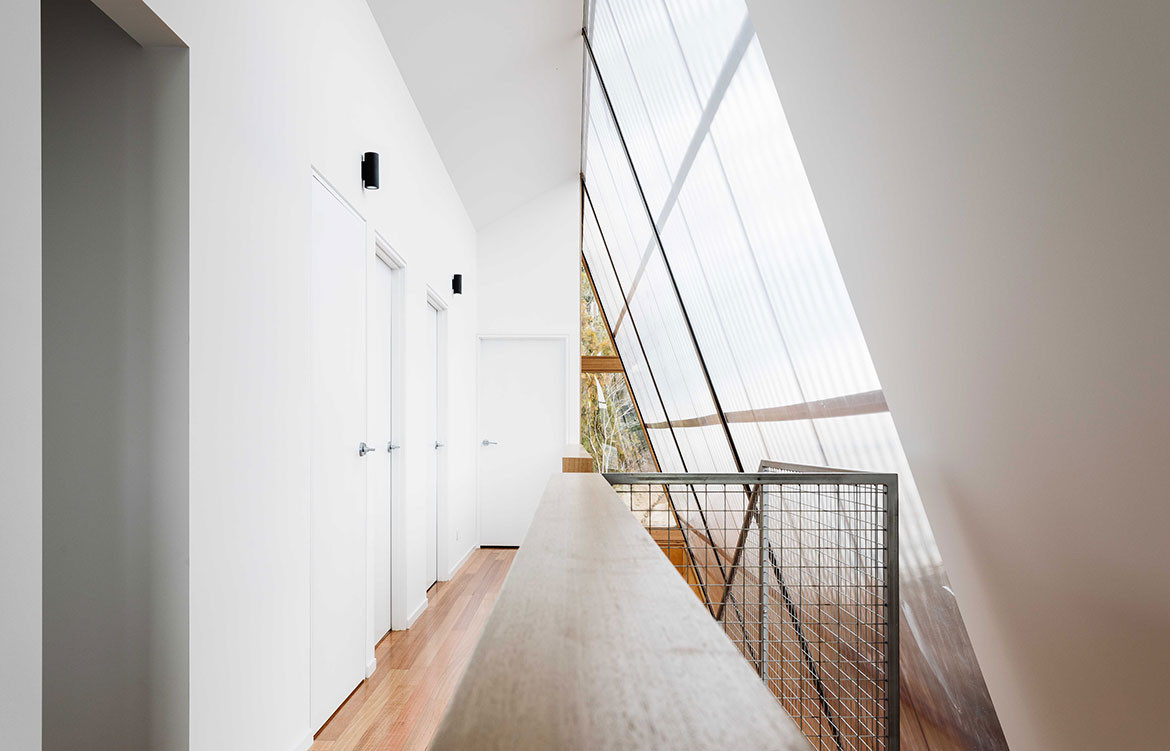 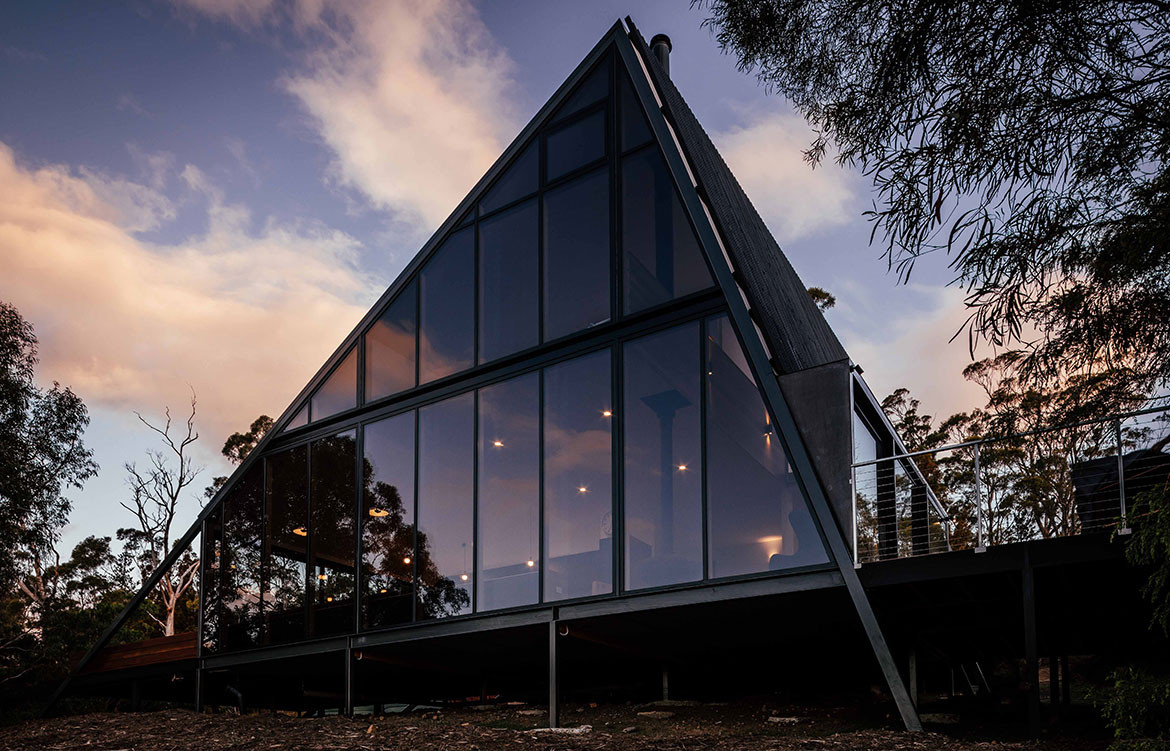 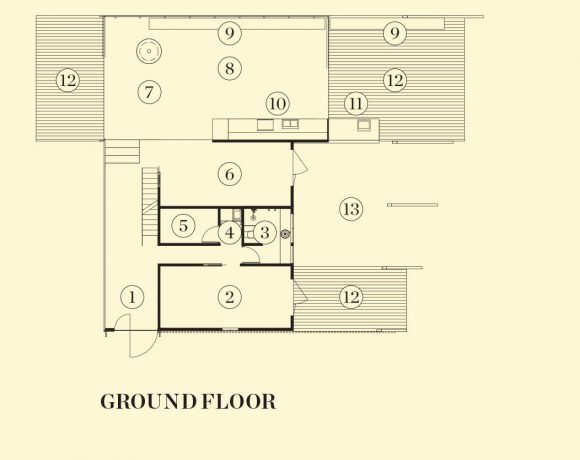