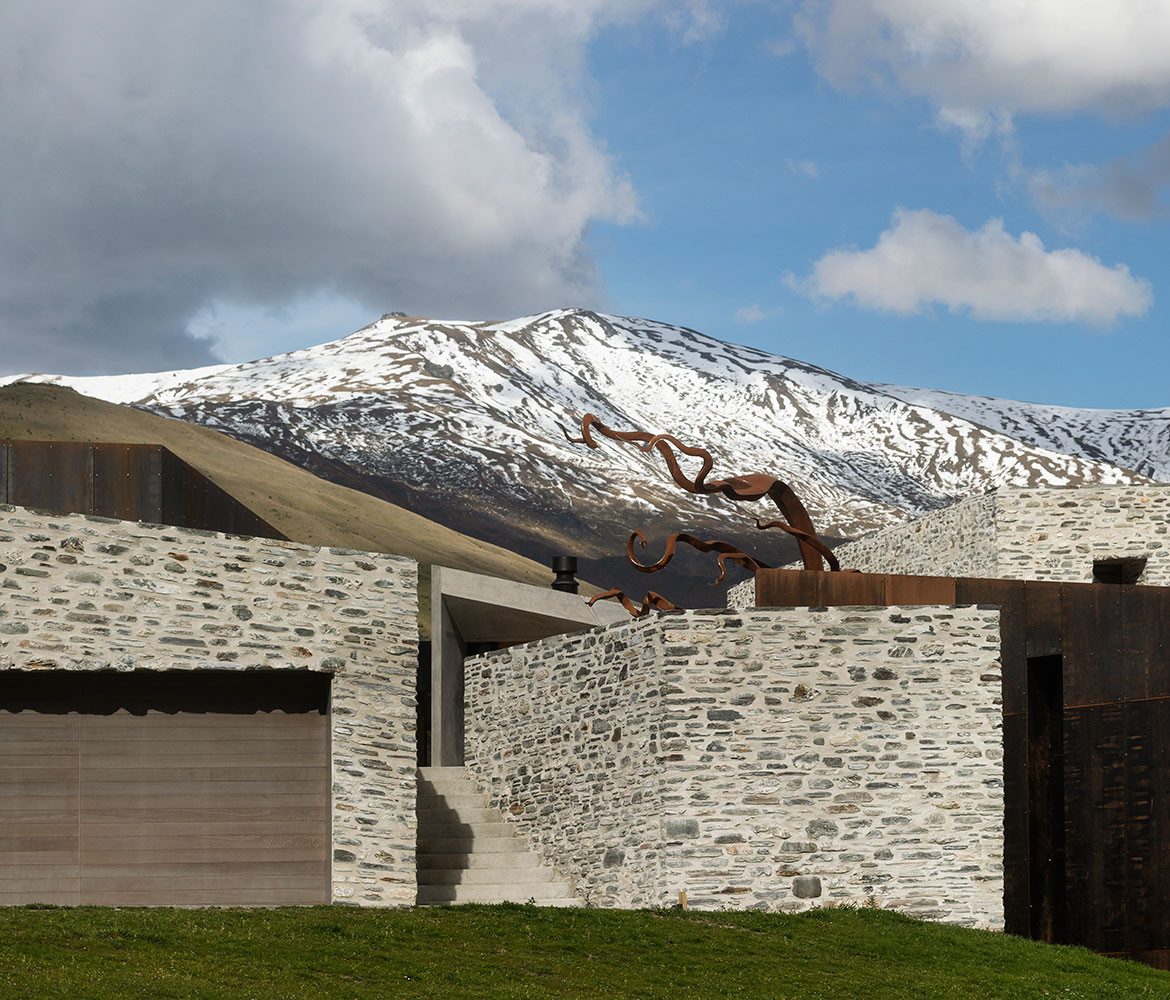 In arguably the most beautiful landscape in New Zealand, this new family home is shaped by its environment.

With its dark beauty and icy winters, the remote Wakatipu Basin attracts adventurers, entrepreneurs and nature lovers. Twenty kilometres from Queenstown, it is cradled by the Southern Alps and exposed to a climate of extremes. Architects navigate the strictest rules of the ‘outstanding natural landscape’ zoning, so that buildings bed themselves in and create an architecture of place.

The owners of this house – a sculptor and a graphic designer – are no strangers to abstraction or monumentality; dream clients for any ideas-driven architect. Having grown up in the area, and very conscious of the responsibilities when building in a sensitive landscape, they decided to put their three-bedroom family home out to a selected architectural competition.

Rich Naish of RTA Studio won the competition based on the experience of the landscape from inside the house and the natural sculptural qualities his play of forms evoke. Having built his own family retreat 20 minutes away and the Wanaka House in 2013, Rich knows the area well. “Sculpture was an important part of the brief,” he says, “the house as both an object in the landscape and as a place to display the client’s work. We proposed a series of pavilions set into the ground at various levels and angles, following the contours of the land rather than modifying them. We saw the building being ‘of’ the land rather than a building ‘on’ the land.”

The whole area is in fact sculpted by glaciation and erosion with the basin floor peppered with exposed stone outcrops. As well as this very raw, physical environment, there are the remnants of 18th century gold mining. Scoured rivers with the iron huts and stone stores abandoned after the gold rush, left to weather and rust. These simple structures formed a basis for the geometric and material expression of the house – shed-like ‘remnants’ recreated in weathered Corten steel for the bedroom pavilions and the local Glenorchy schist for the living pavilion and garage.

These four pavilions – two stone and two steel – are carefully placed around a small rise and accessed from a central sculpture court. Reached from the driveway below by a flight of steps, this arrival space is an urban (almost civic) experience. Lined in granite cobblestones, and enclosed by the four wings of variable height, the space feels like the plaza of a medieval hill town. It’s where the full palette of materials combine – steel, mountain schist, exposed concrete and a large bronze front door recalling the gold nuggets once gleaming from the river beds. The client’s own organic sculpture adorns the court and has recently been joined by another work, the two pieces activating the space, their organic lines contrasting against the cubic forms of the house.

Internal planning was all about celebrating the landscape through captured and framed views. The experience is of a house that is part compass and part hide with each room offering a unique perspective. The owners’ favourite view is of the Remarkables mountain range to the south, so the living pavilion frames this panorama while catching sun from the north. The main bedroom and study frame a more intimate view of Mount Soho to the north, while the sons’ bedrooms frame Cecil Peak to the southwest.

“These view catchers explain the wedge shapes of the house,” says Rich, “both in plan and section. Rooms stretch out toward the landmarks, like navigational lines on a map. This was the dream the owners had. It was always about framing these beautiful views that they had grown up with and bringing the landscape into the house.” 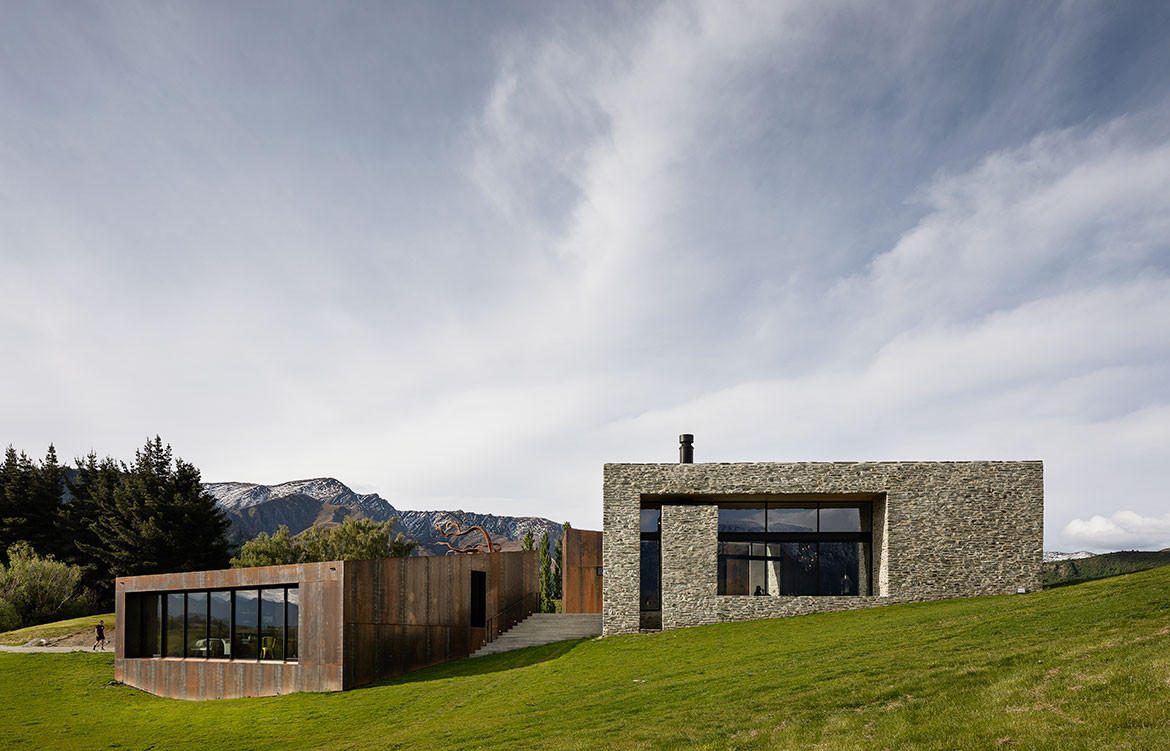 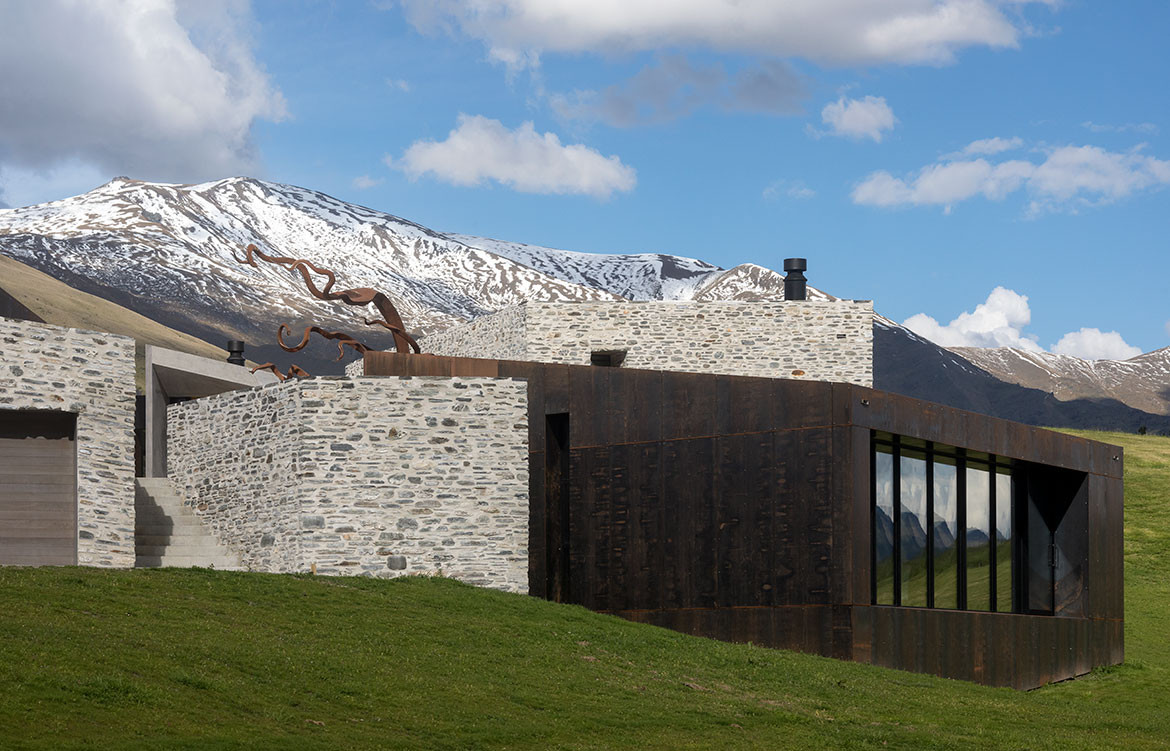 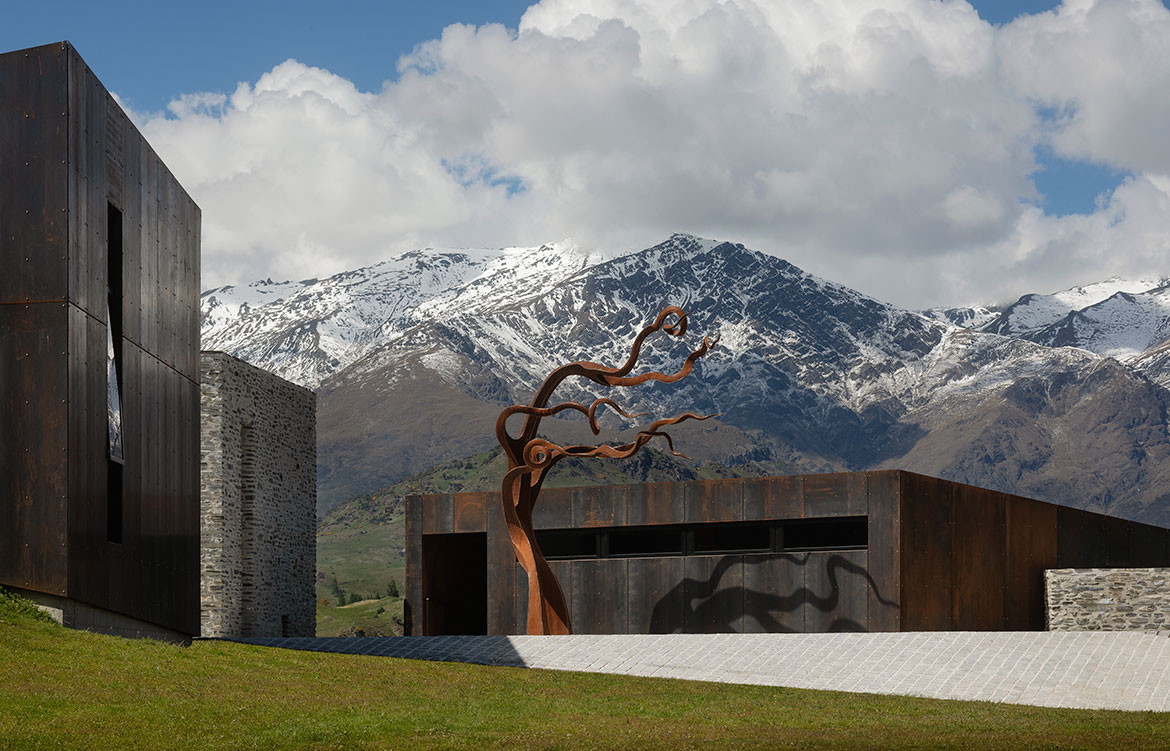 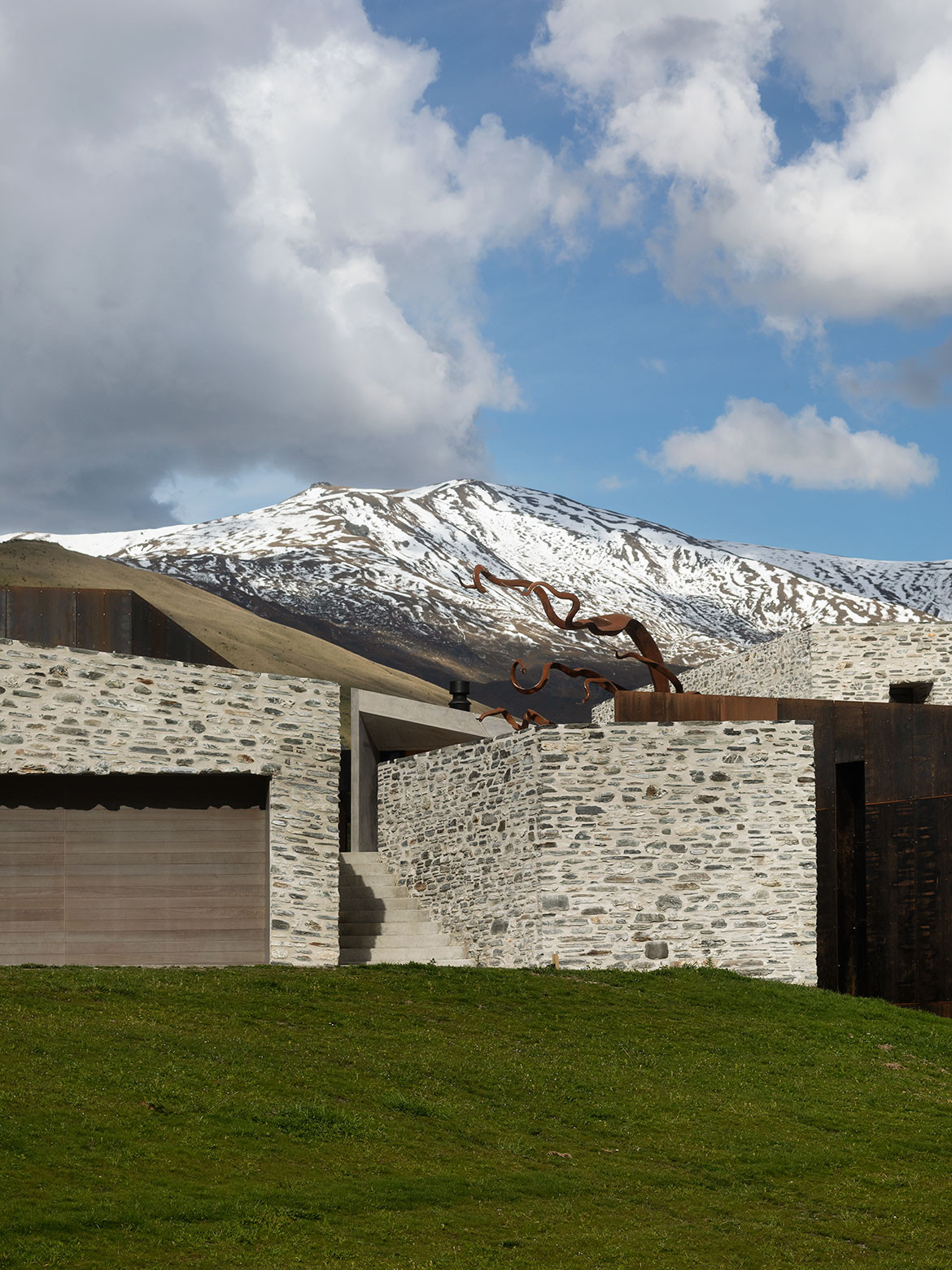 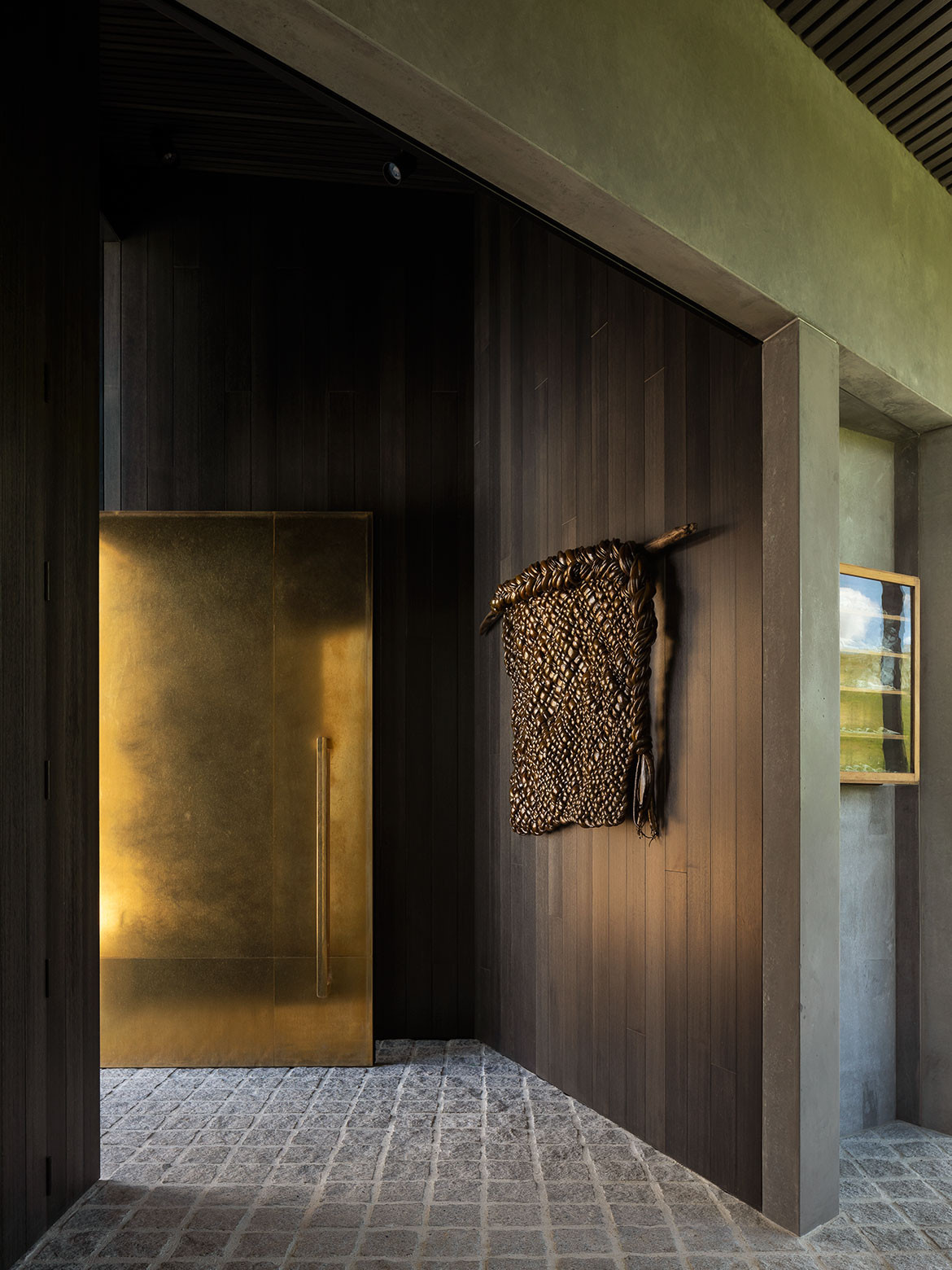 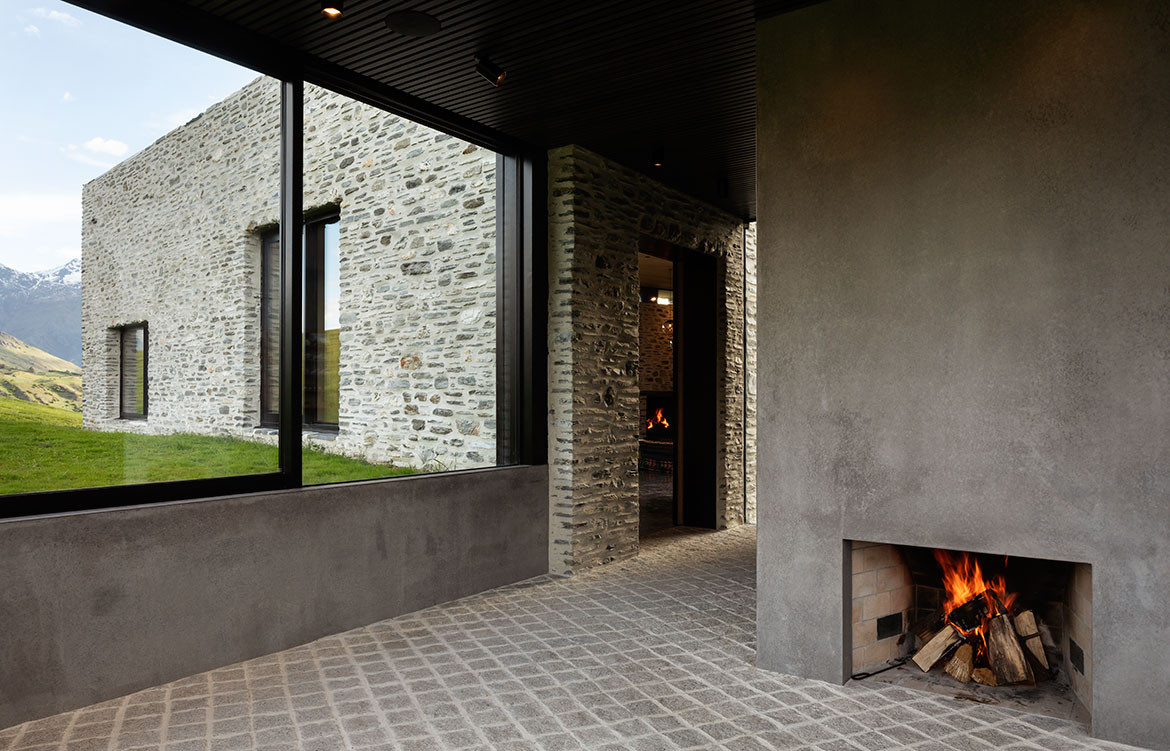 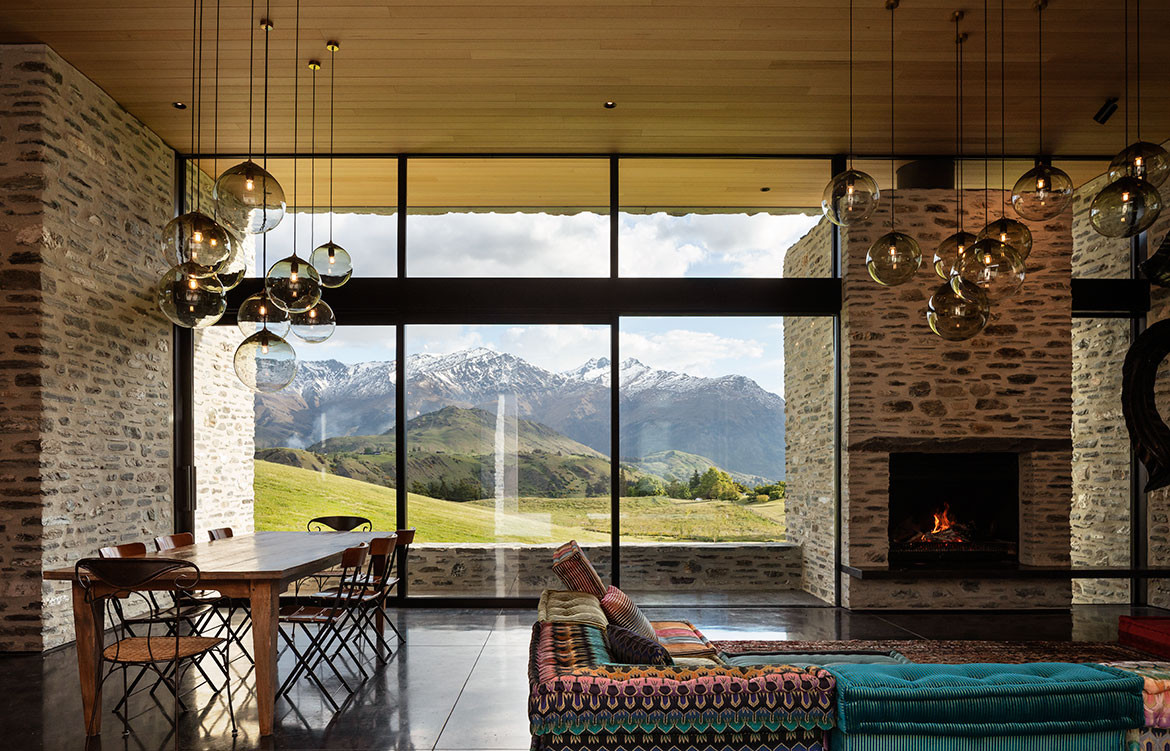 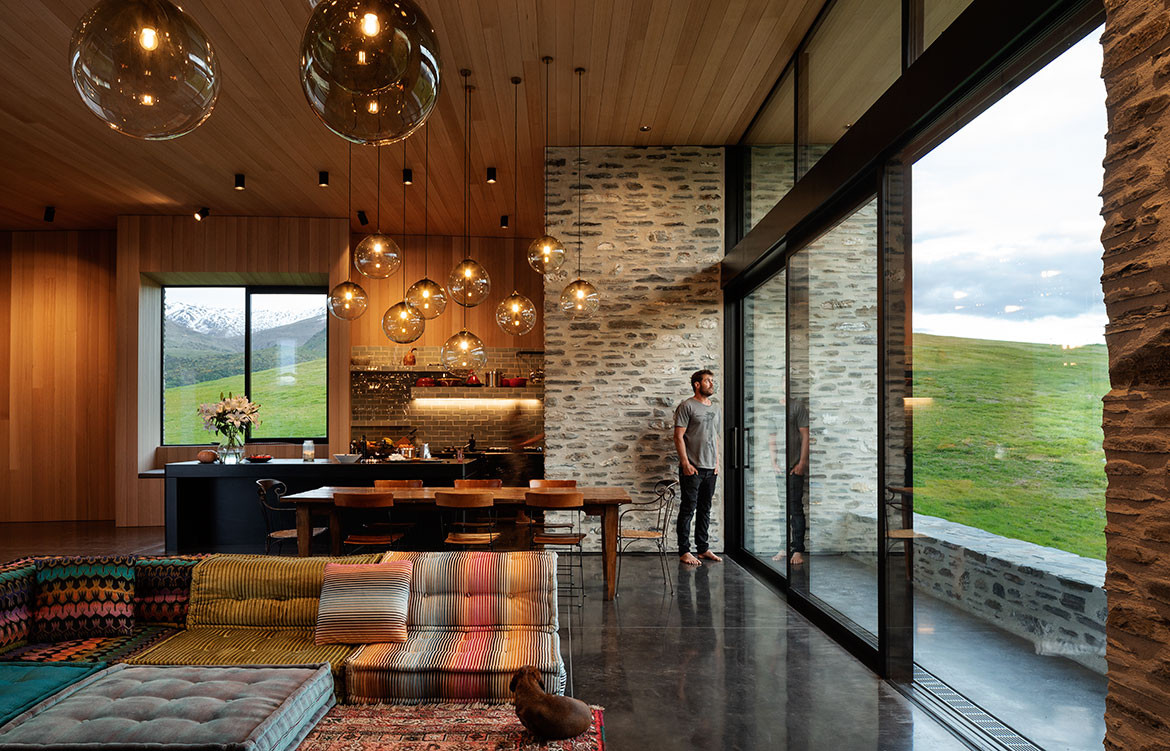 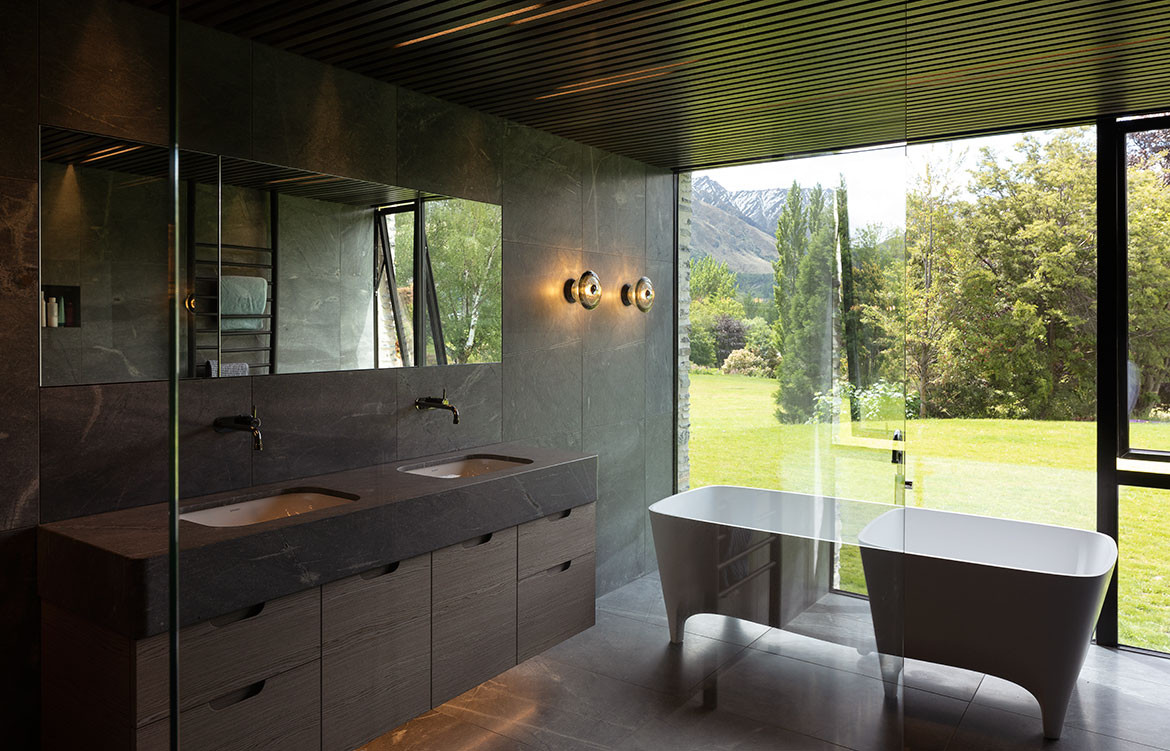 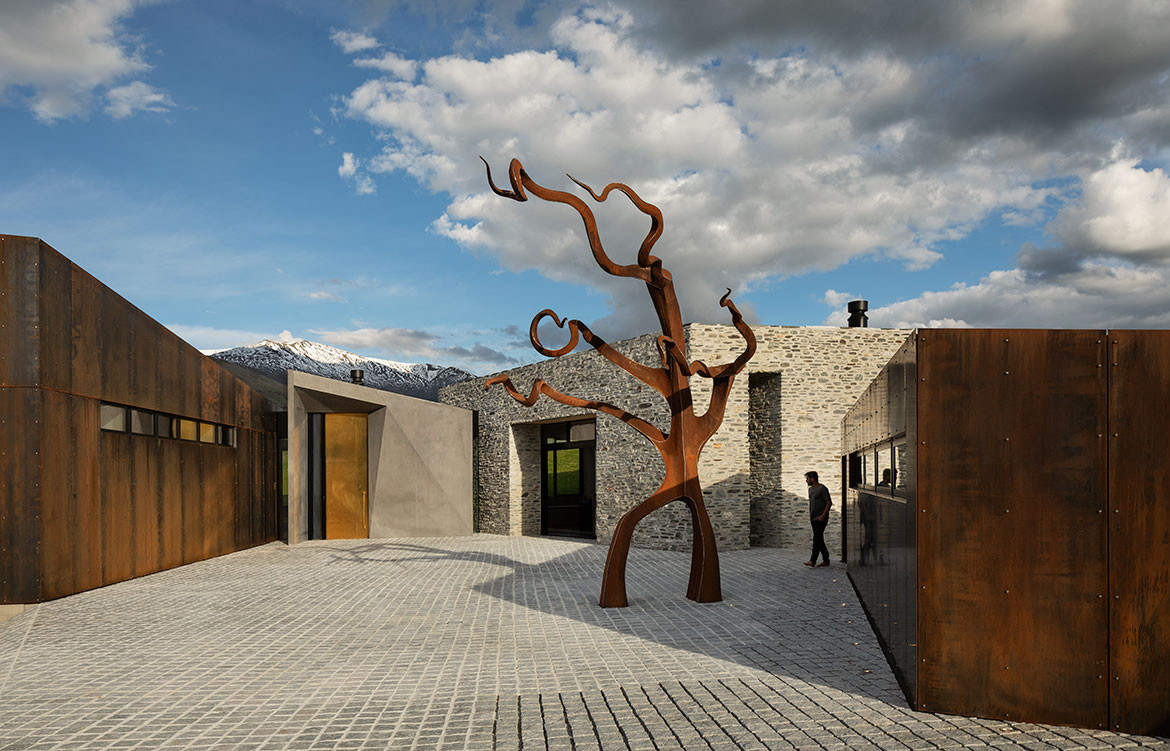 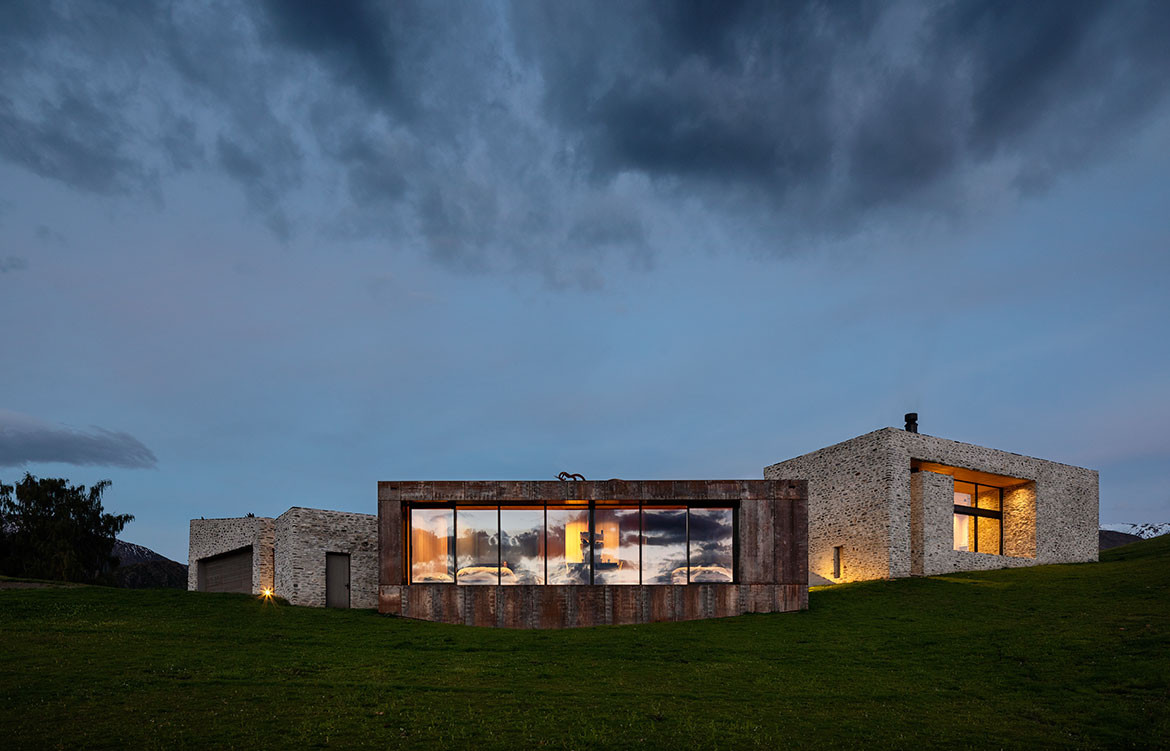 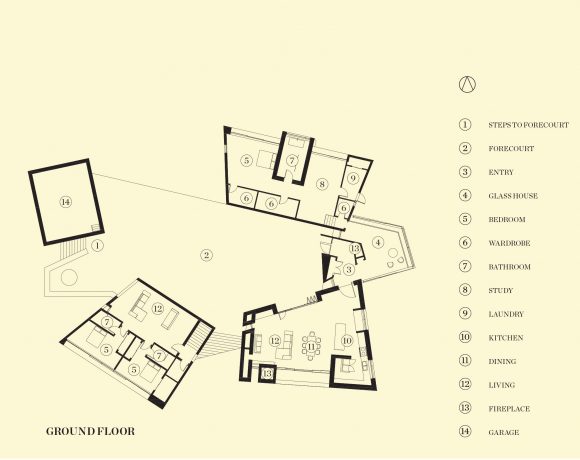