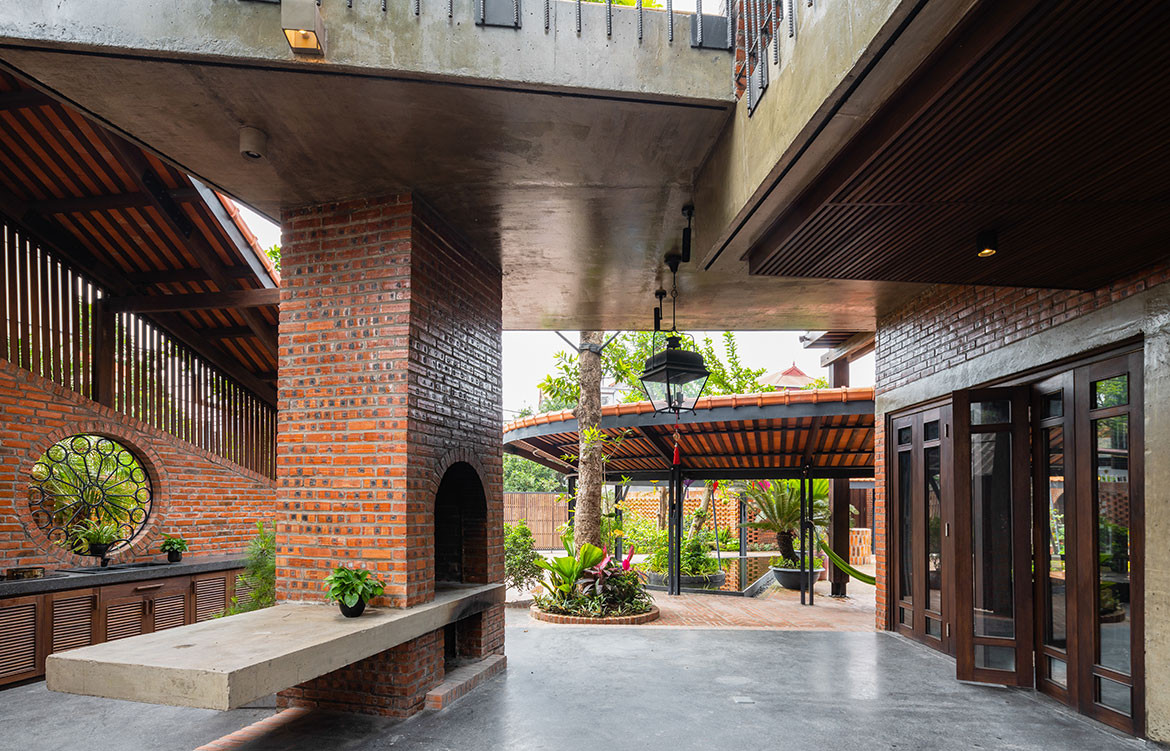 Usually, three generations in a house represent a family. But a house can also bring together the past, present and future of a whole community, especially when it is organised like a village.

BacHong House is located in a suburban village of Hanoi, on 700 square metres of ancestral land with a family temple. The 70 year-old owner is the chief of the ancestral clan whose existing house has a unique roof made using traditional techniques. The eldest son needed to rebuild the house and take over his father’s role. Hence, he became LAB Concept’s client.

The brief called for a family temple; a large yard for meeting hundreds of people from the ancestral clan; accommodation for grandparents; and accommodation for children and grandchildren on weekends. The client wanted to retain the character of the compound (brick walls, tile rooves, water well, perennials), but also wanted to delight his children such that they would always love the family home and look forward to visits. The challenge was to integrate the needs of modern life into traditional forms and to combine individual spaces with differing needs and activities.

LAB Concept sought to creatively resolve social problems in different situations. Recently, the architecture firm has focused on renewing rural identities and undertaking experiments in Hanoi whereby the traditional peri-urban villages are threatened by a wave of urbanisation. In the case of BacHong House, the idea was to transform the conflicting shapes into something more visually coherent – not only recreating one to two houses, but recreating a sense of the village’s spirit (with the aim of unrolling this model nationally).

Accordingly, the blocks with sloping rooves are separated and buckled into different directions (in order to create vivid images with modestly scaled volumes), and freely arranged around the wide yard in front of the temple. The multi-directional, multi-centred elliptical patio and eaves create a soft connection, turning oppositions into dialogue.

The grandparents need peace and quiet, but are situated together with the active grandchildren with increased opportunity to engage with them, or simply watch them play. It also gives the parents on the other side a certain independence and privacy. There are many exciting corners, stimulating children to explore. The gate can be opened widely at the land corner to expand the village road space during the Tet holiday, weddings, funerals and more for the entire clan.

The main materials are bricks and tiles which harmonise with the existing context. Bricks are taken from multiple sources so as not to feel like “wearing new uniforms”; the courtyard is paved according to the different patterns of the old village roads; even the tiles are manually produced to allow moss to grow. Fish-scale tiles are chosen because it allows roofing to consist of complex shapes (including funnel-shaped curved eaves). Brick walls and concrete structures are not plastered in order to retain the Brutalism as a background for sophisticatedly crafted wood/steel components. This is also an opportunity to apply and improve the traditional construction techniques: solid walls to block the sun, light walls with holes for ventilation, multi-layered roof for waterproofing and insulation. The result is a retrospective and eclectic scene – but visually effective.

What is notable is the combination of the western elliptical patio with an oriental composition according to feng shui principles. It catches the attention because it is unexpected and, therefore, the ellipse needed to be moderated so as not to emphasise this foreign element. Hence, it is only at the roof border. The patio and the yard are paved with the same patterns – without the elliptical boundary. The eaves also cross residential blocks at a few points so that there is no longer a continuous second ellipse. 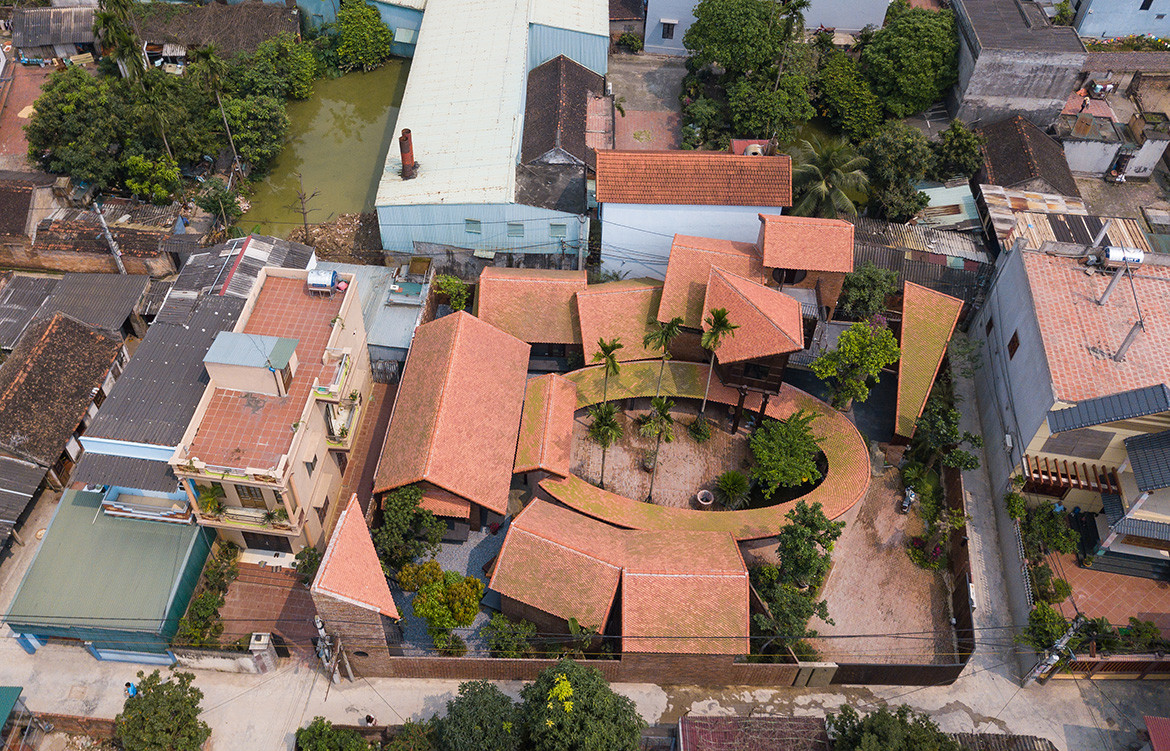 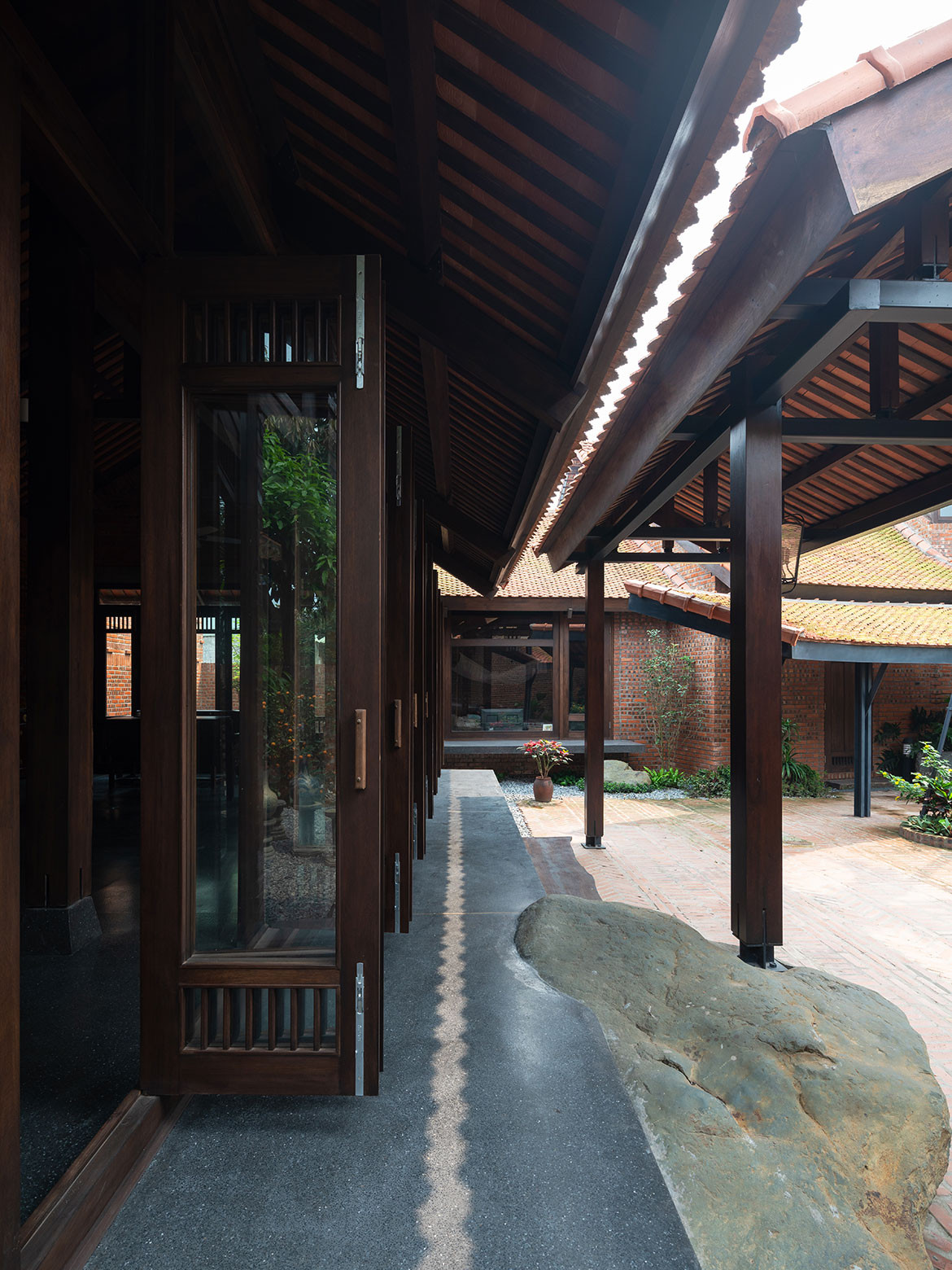 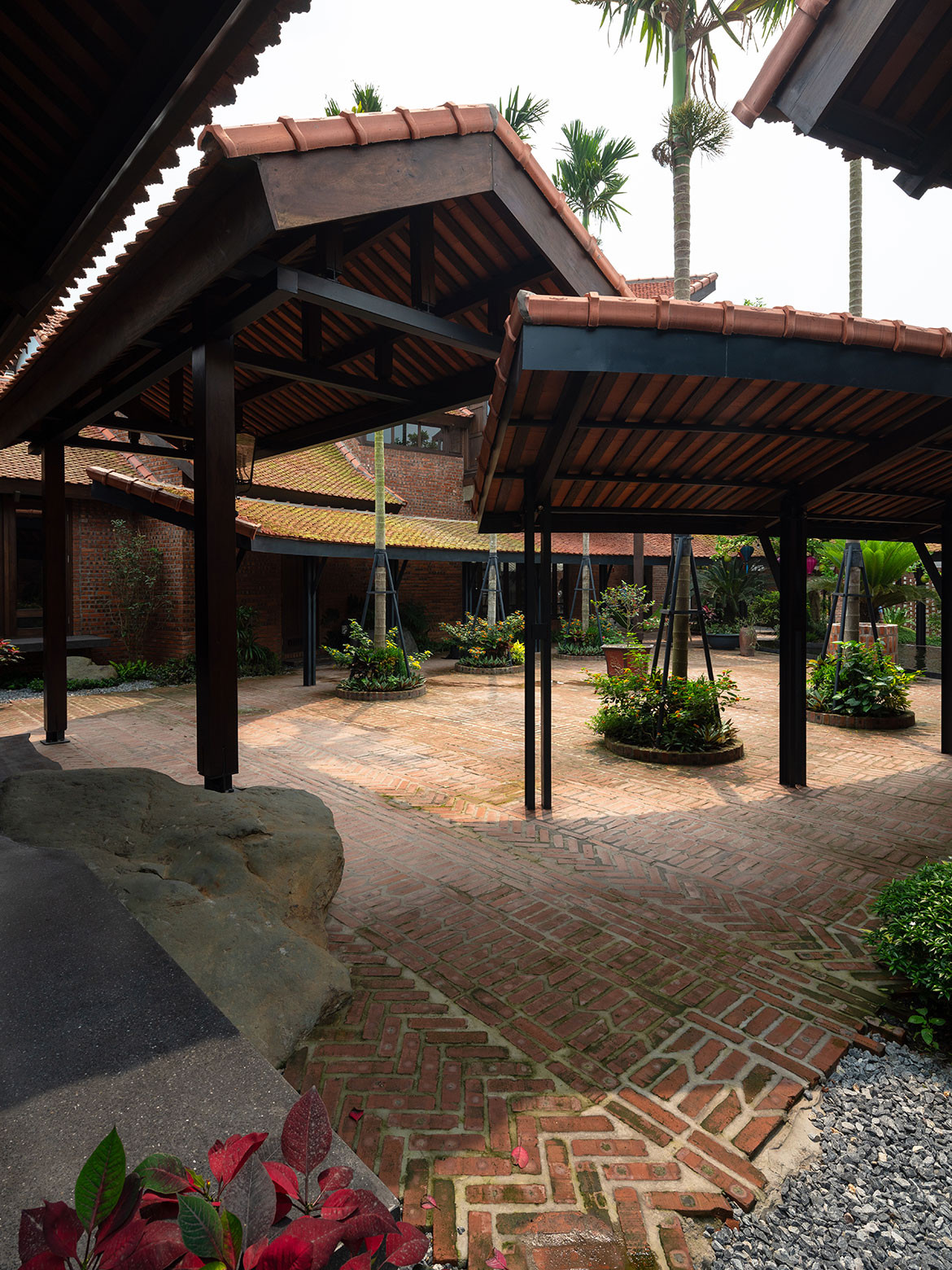 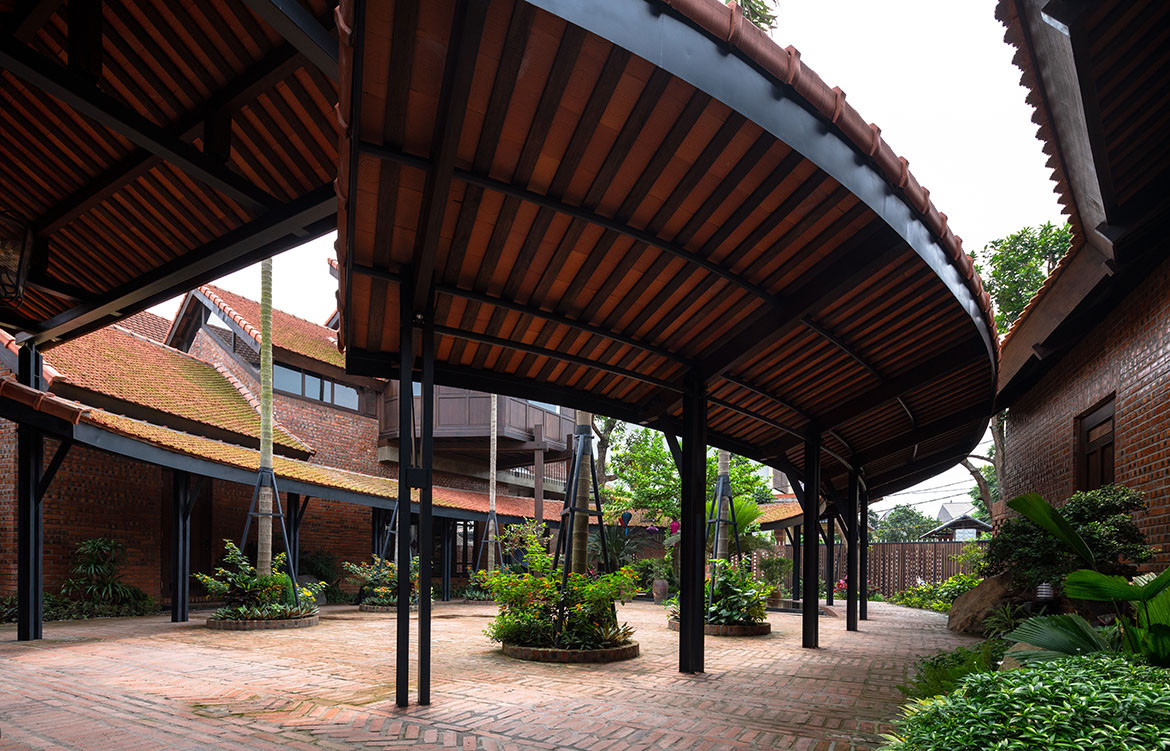 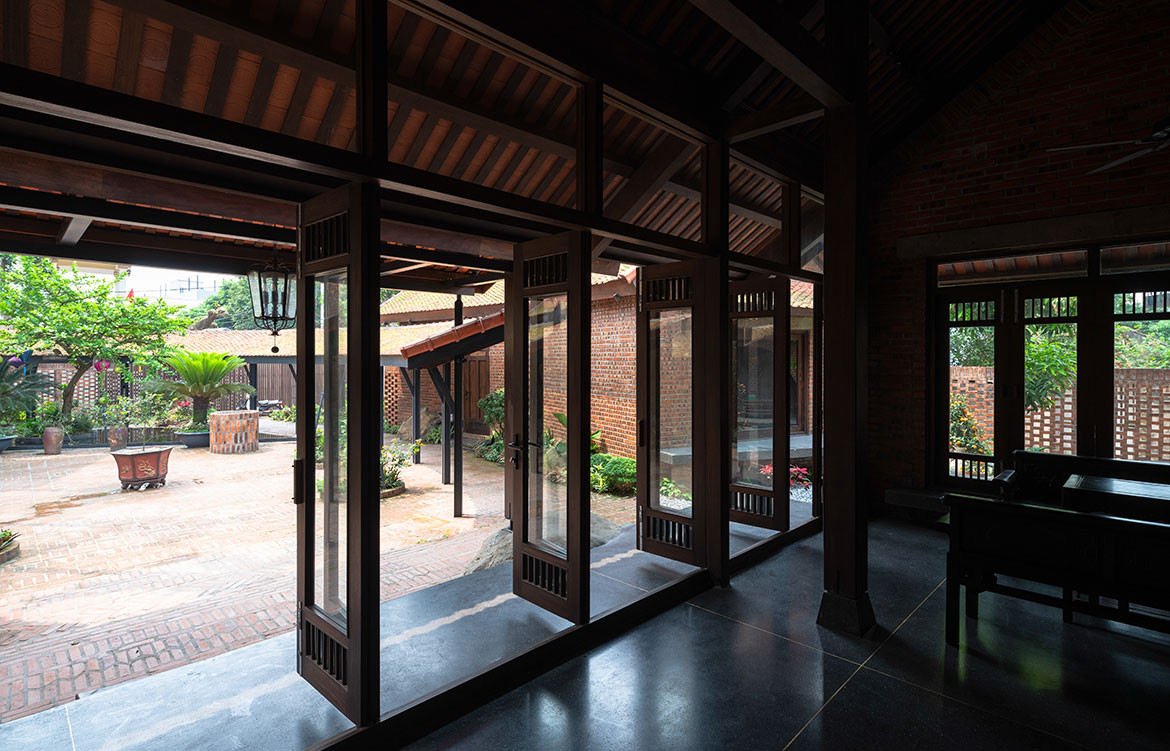 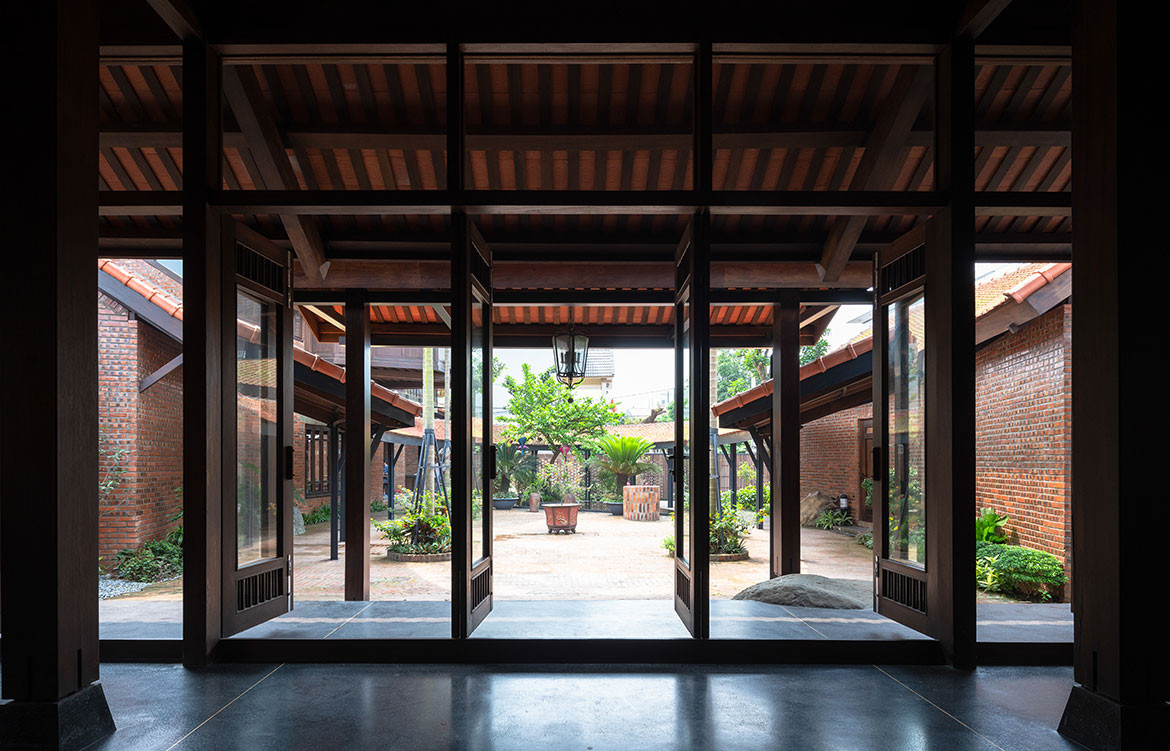 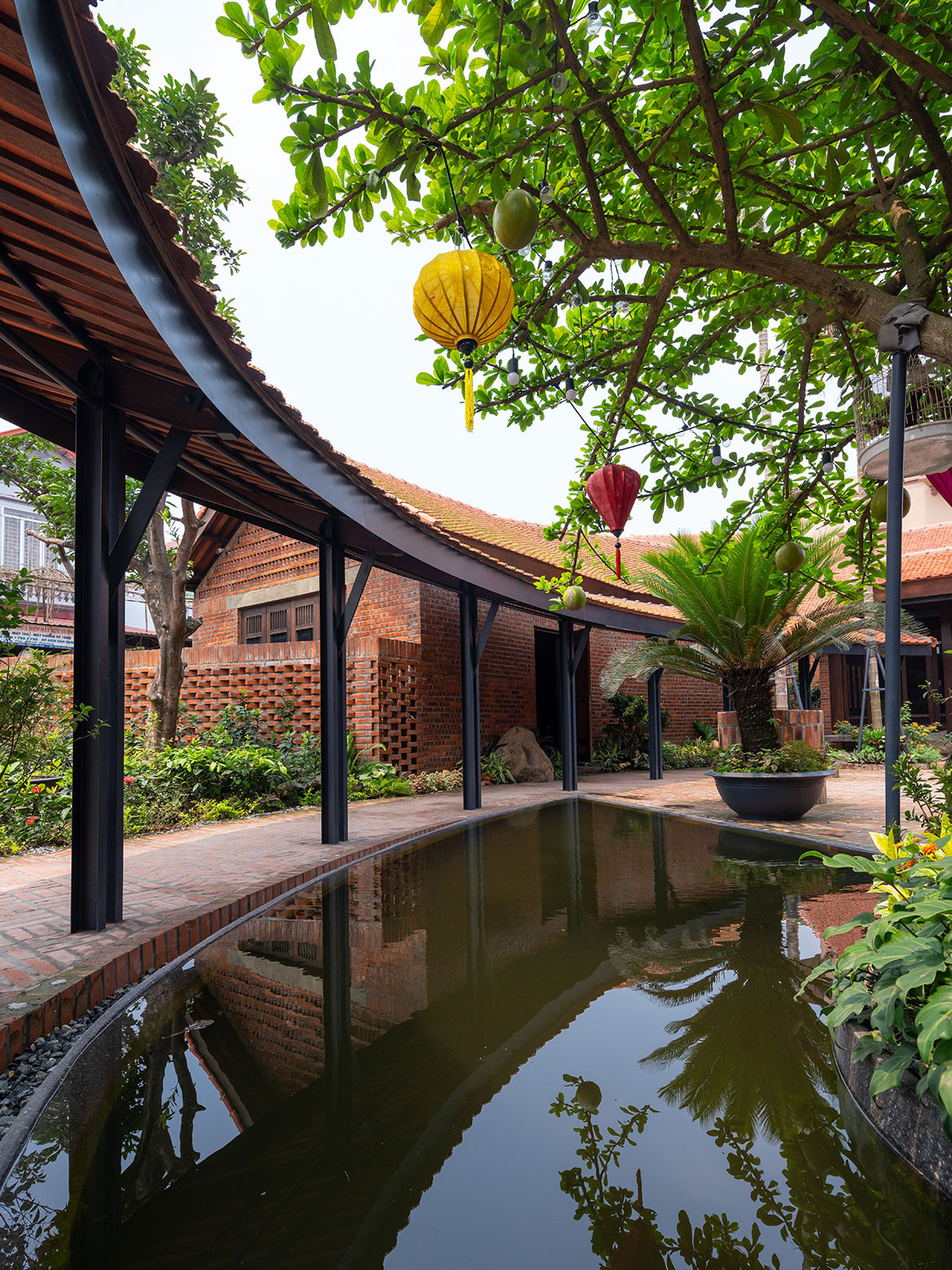 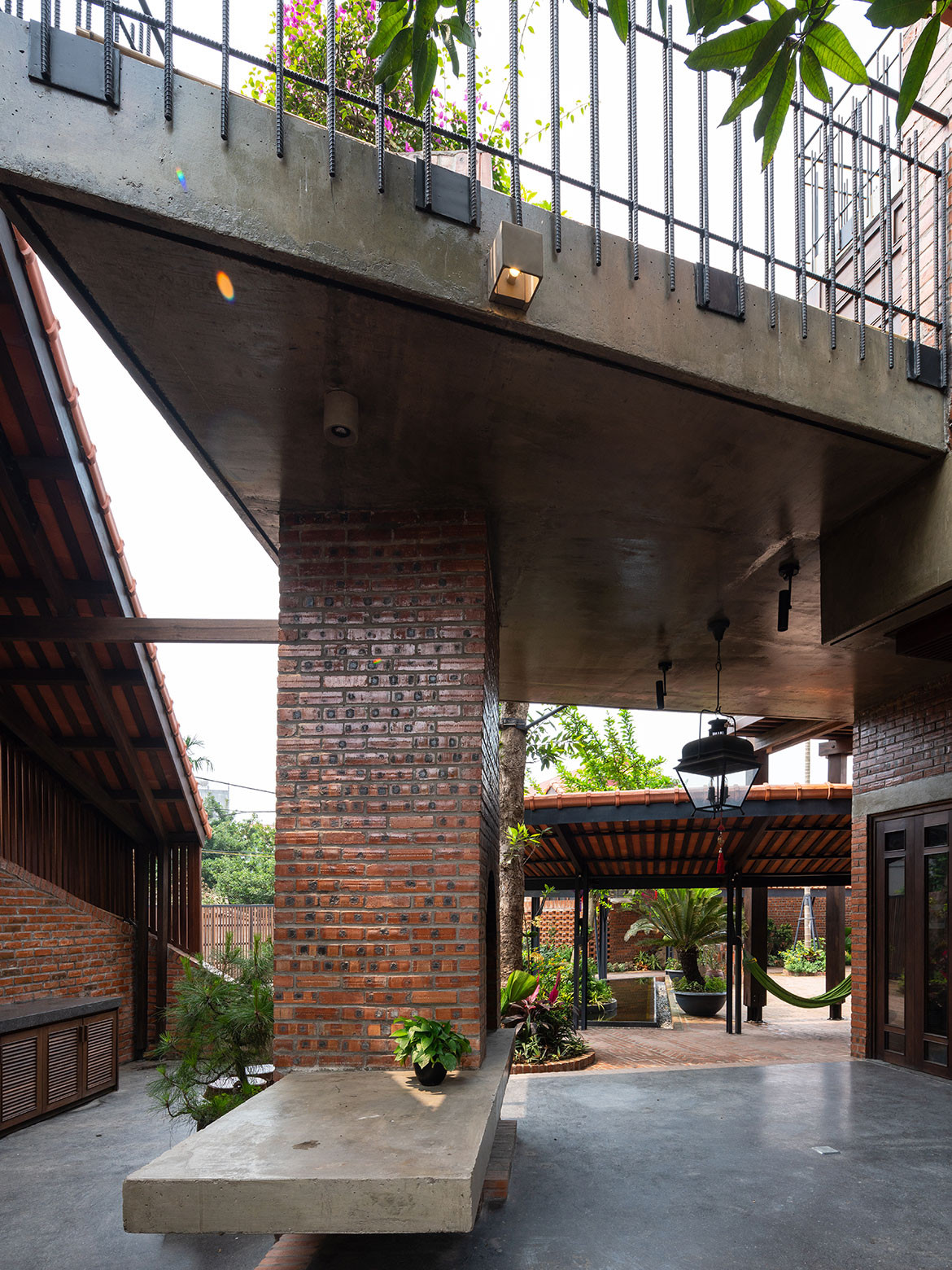 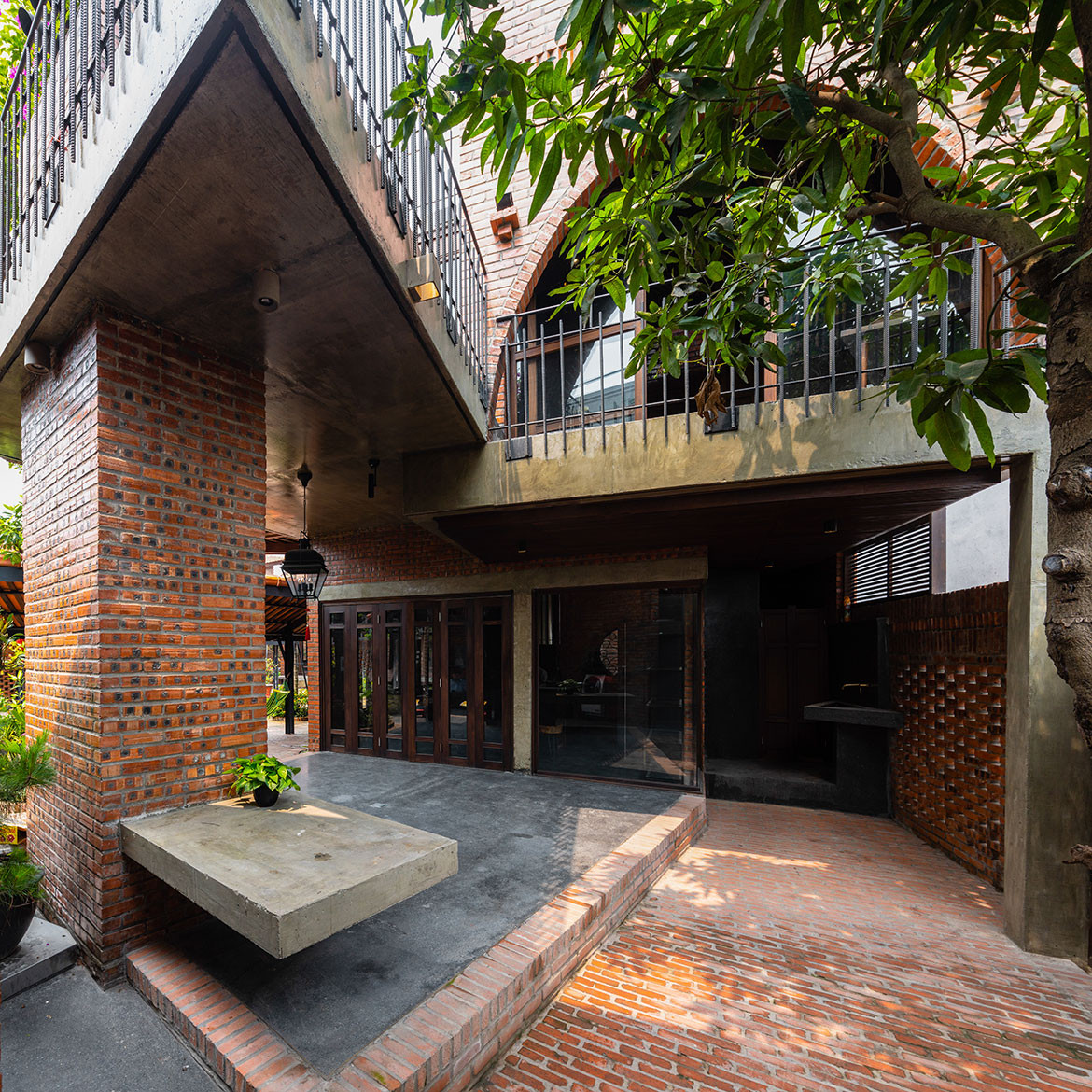 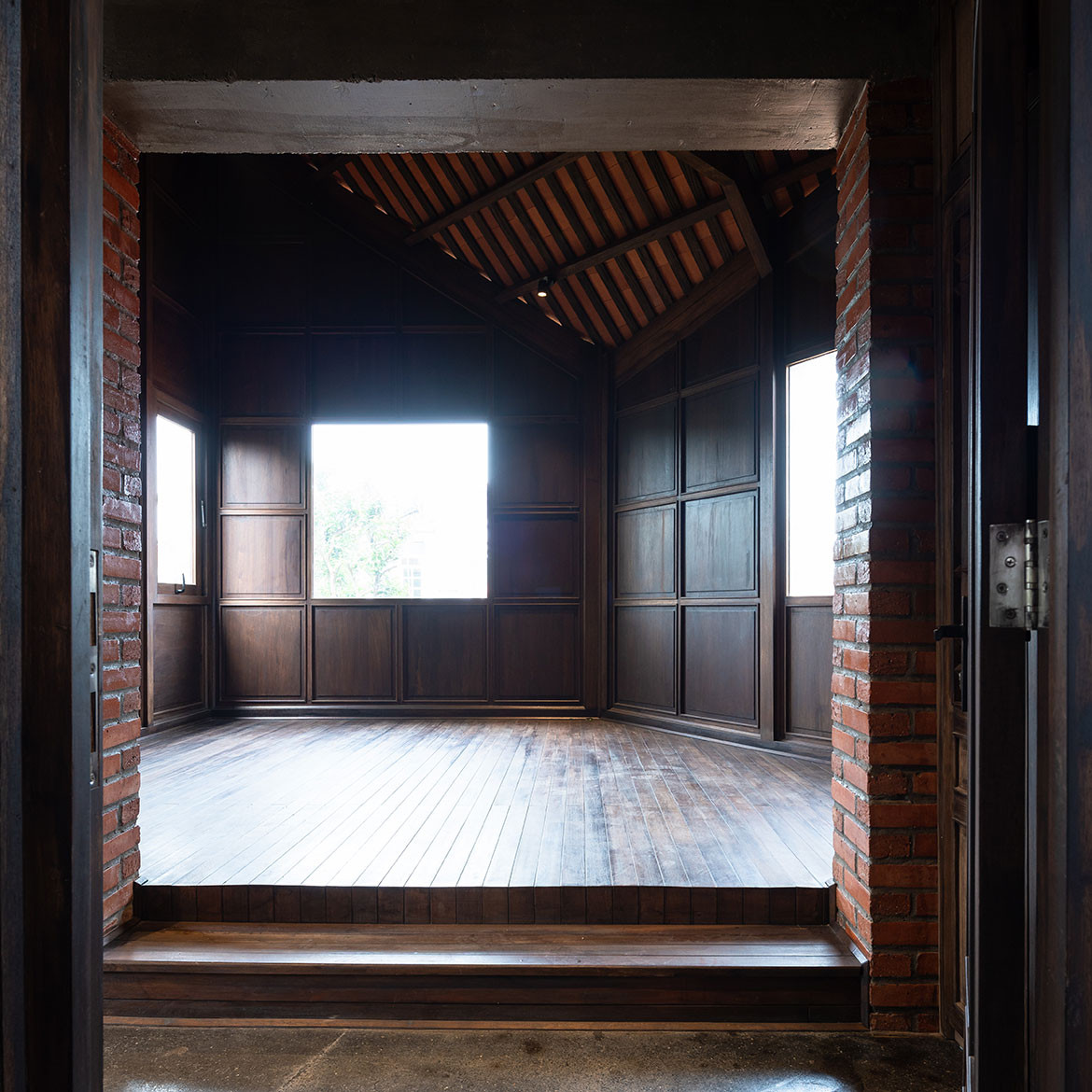 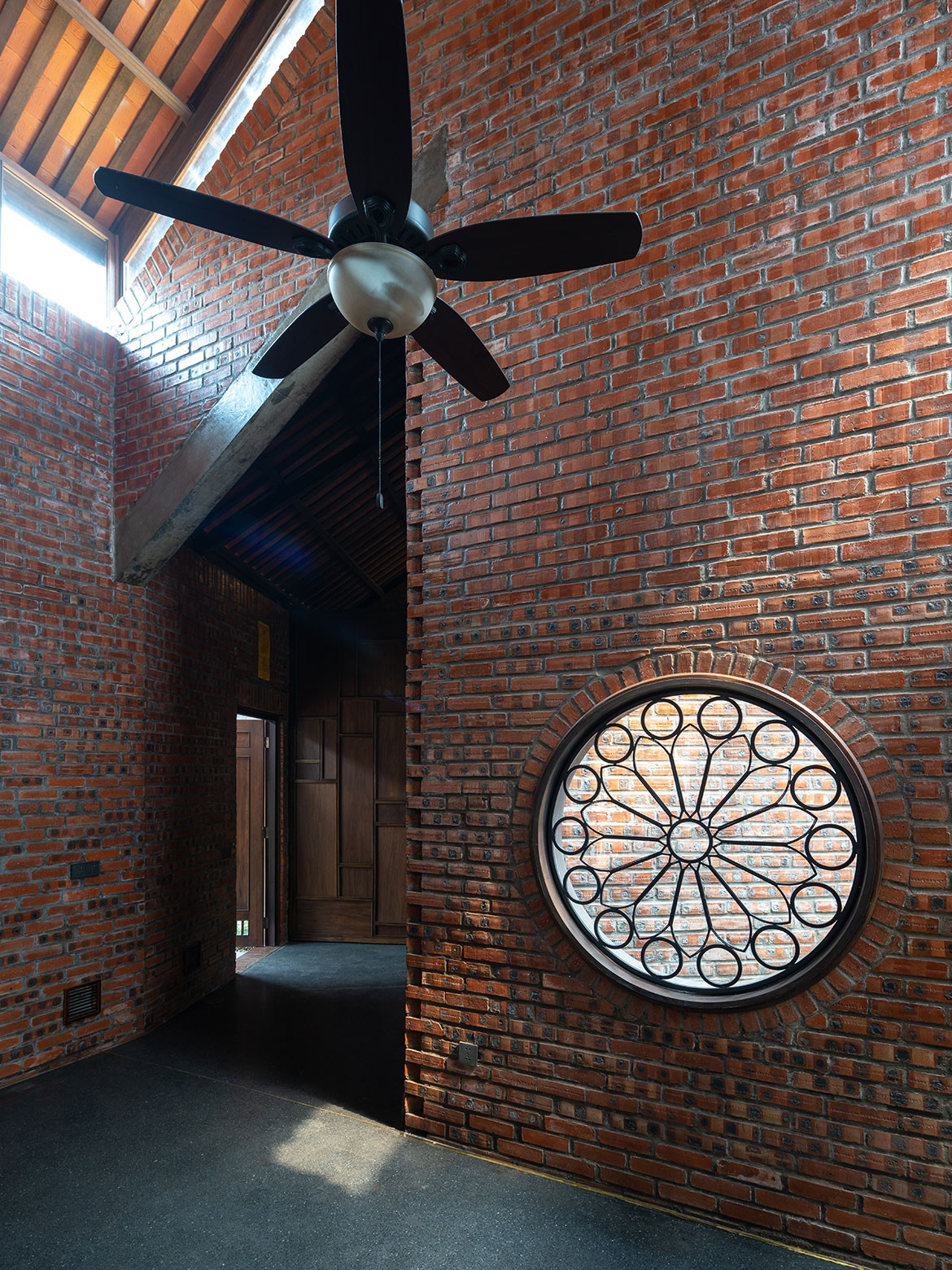 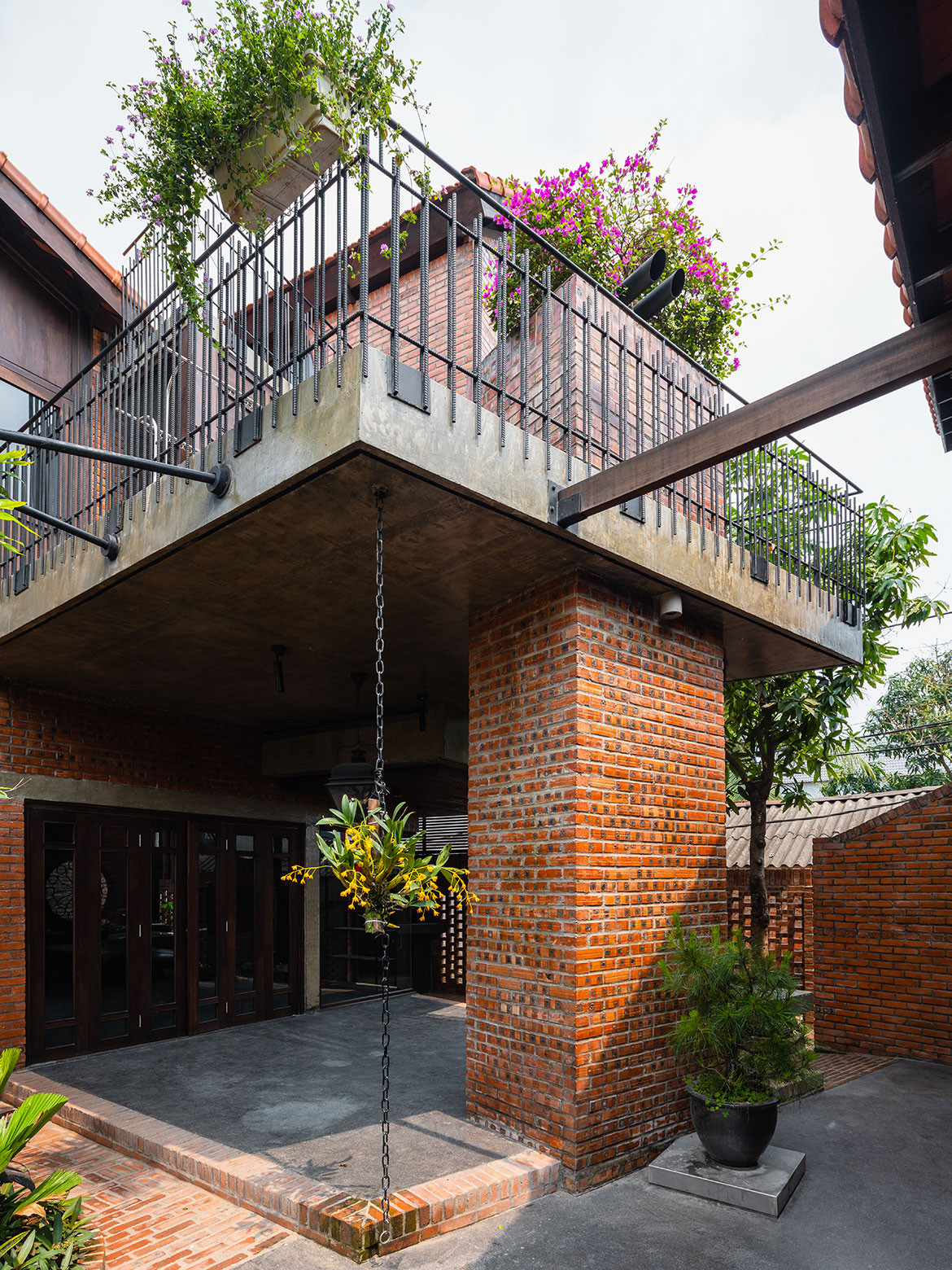 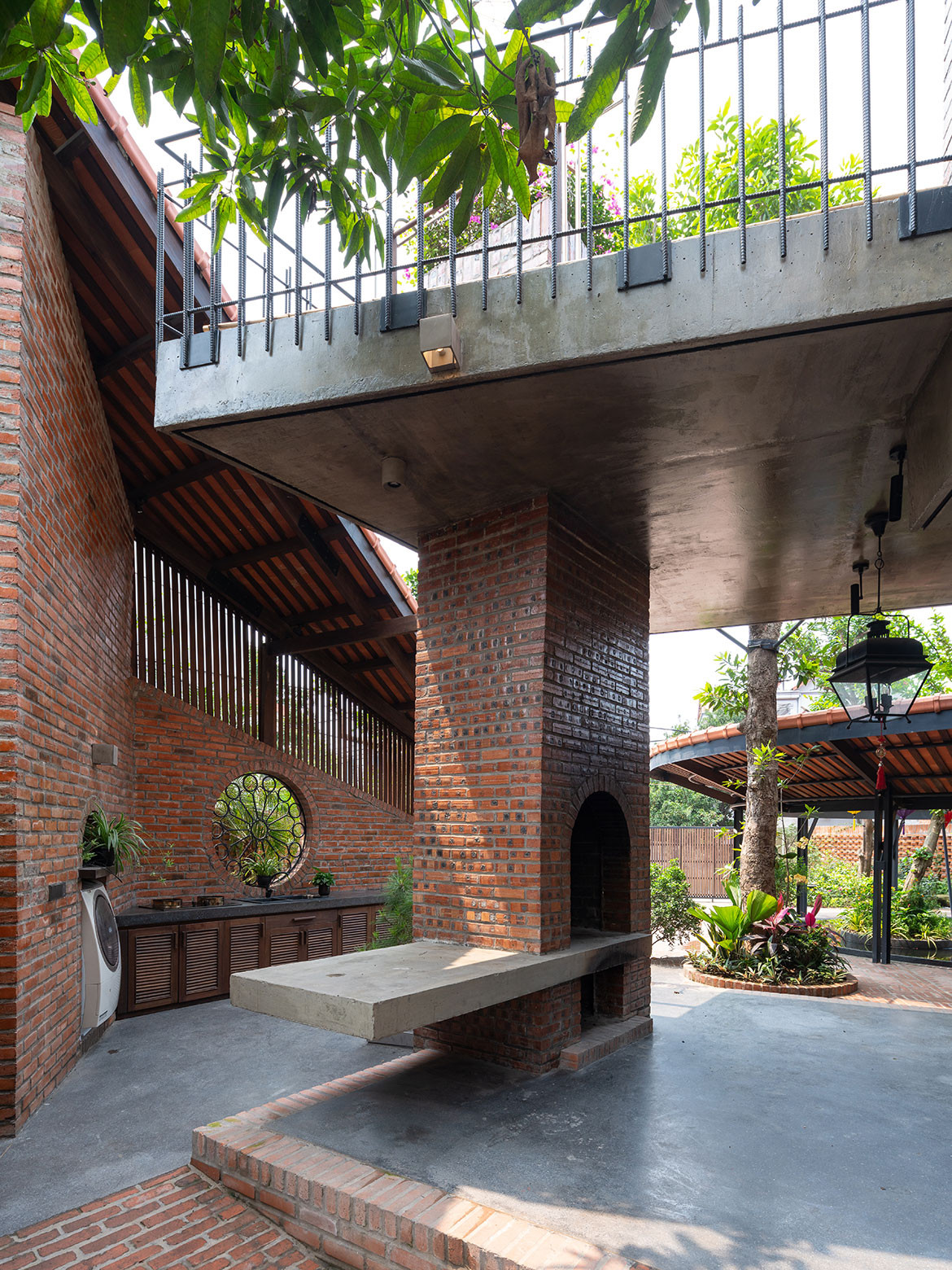 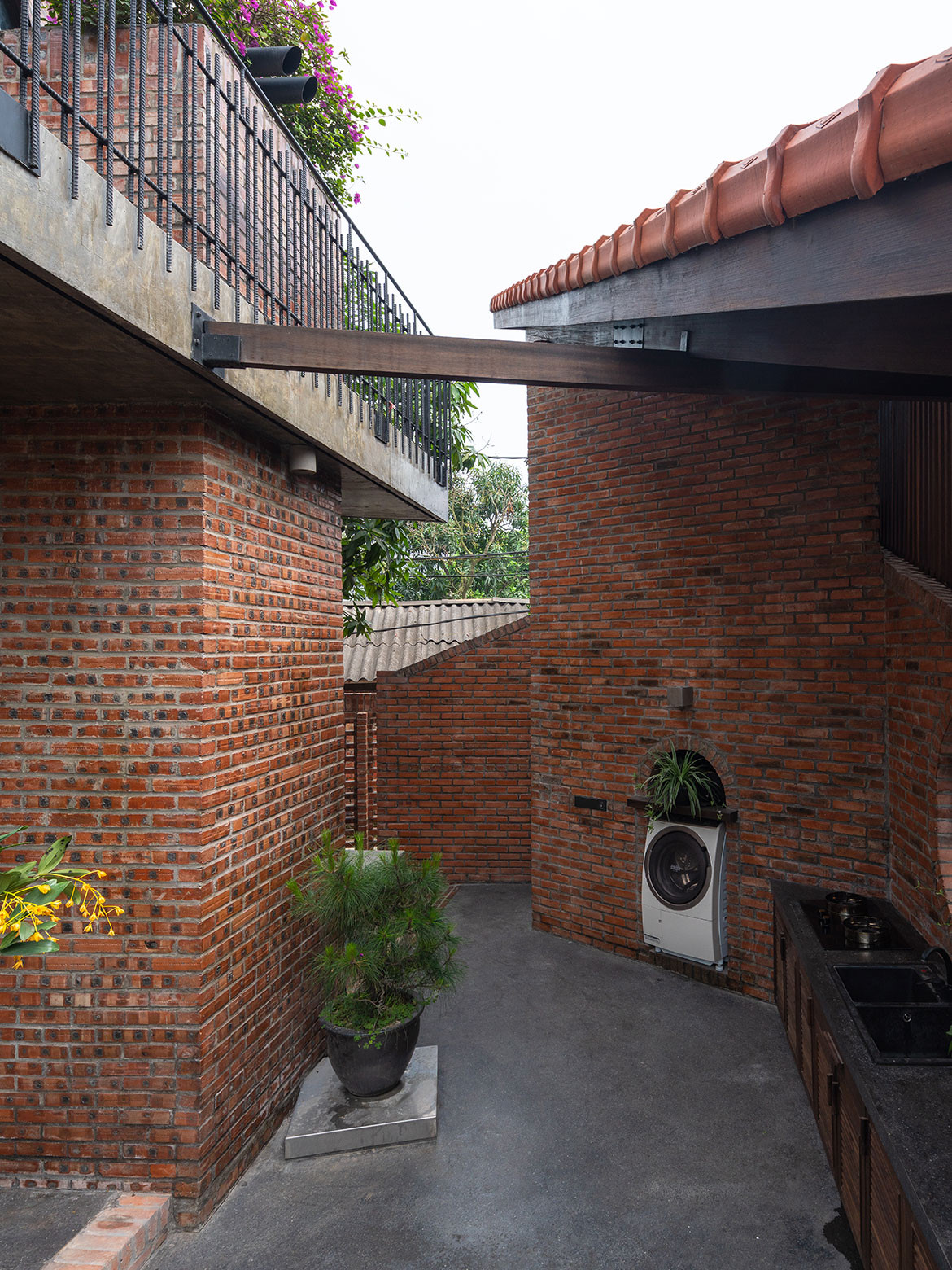 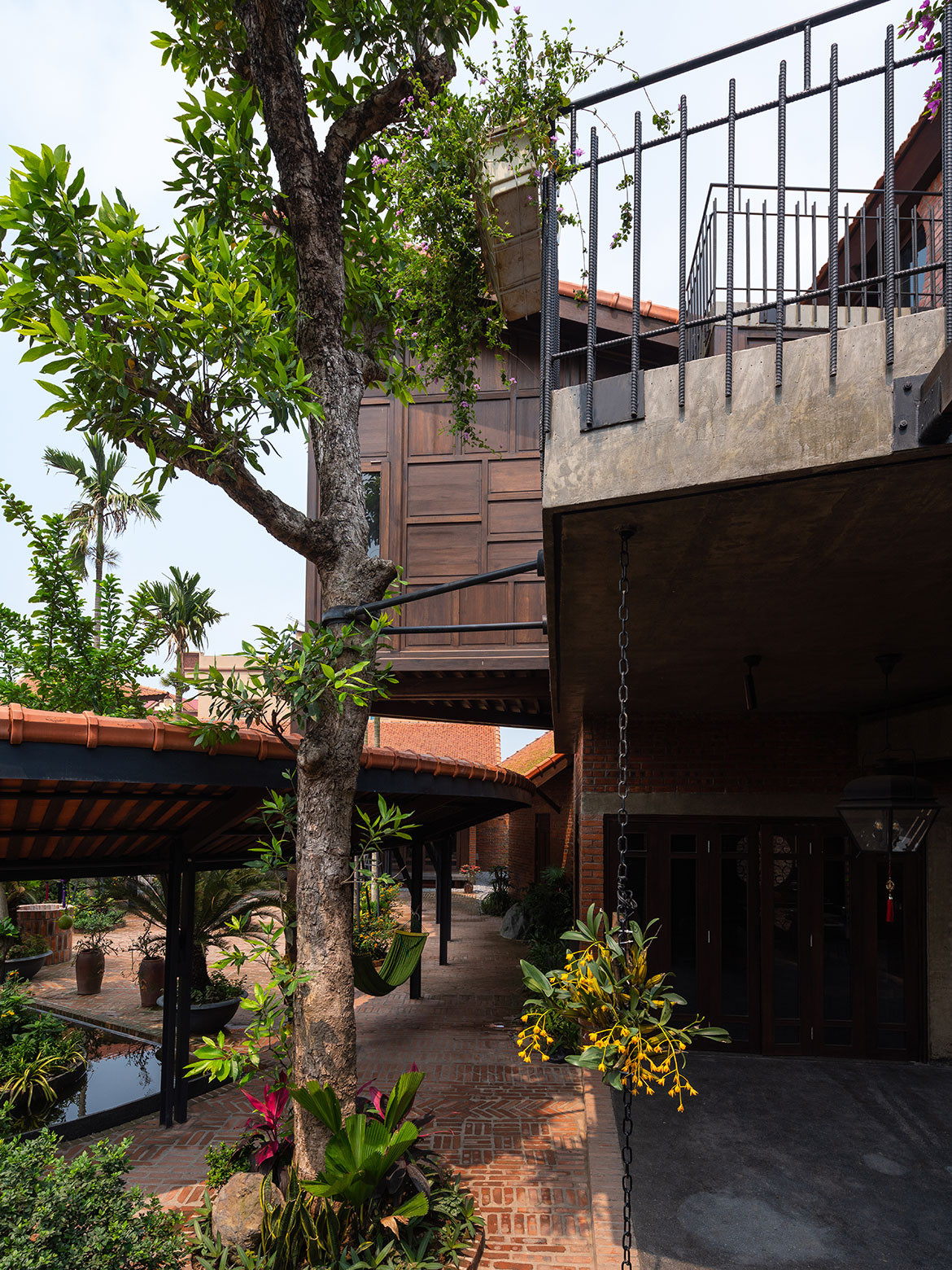 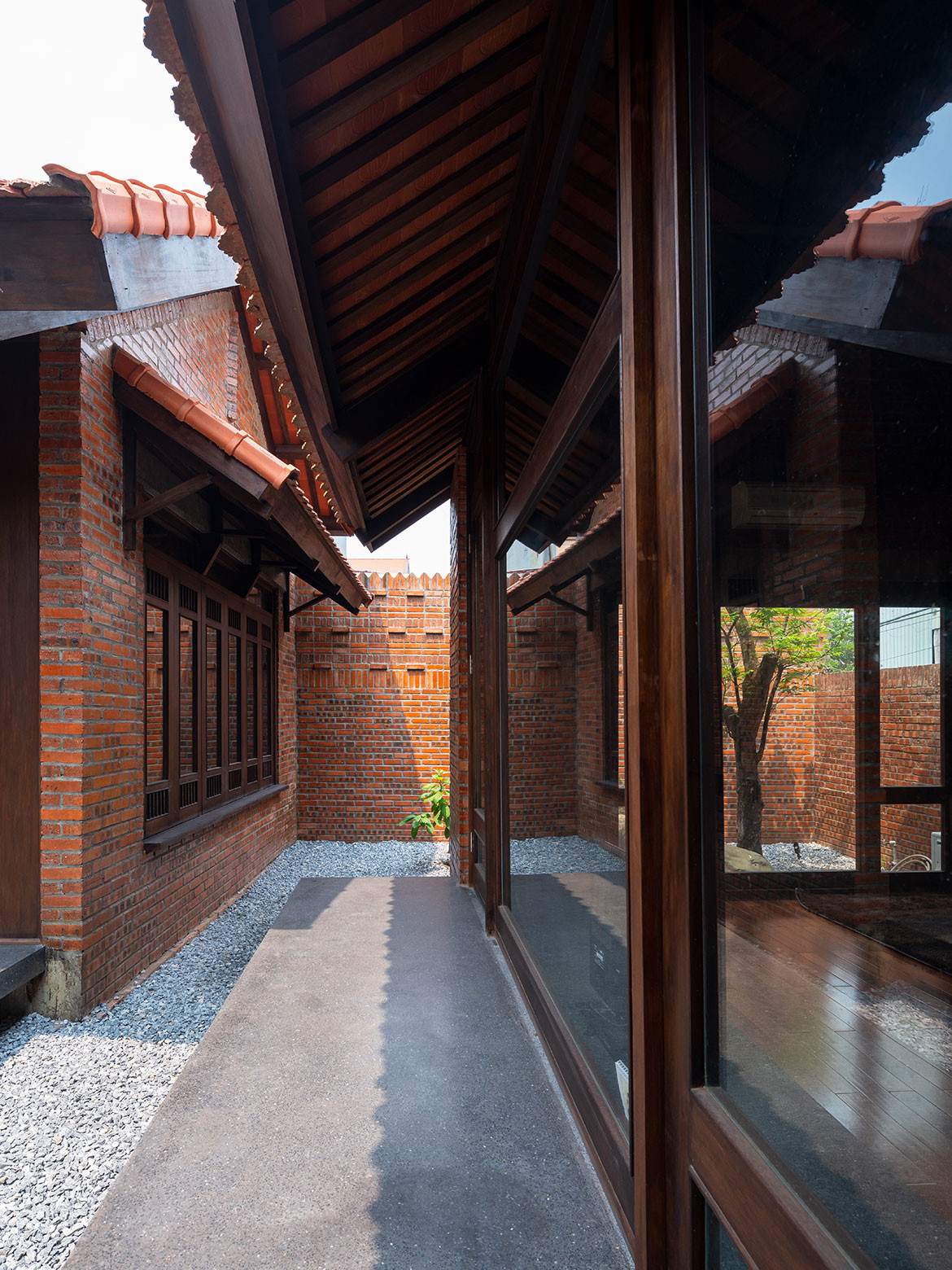 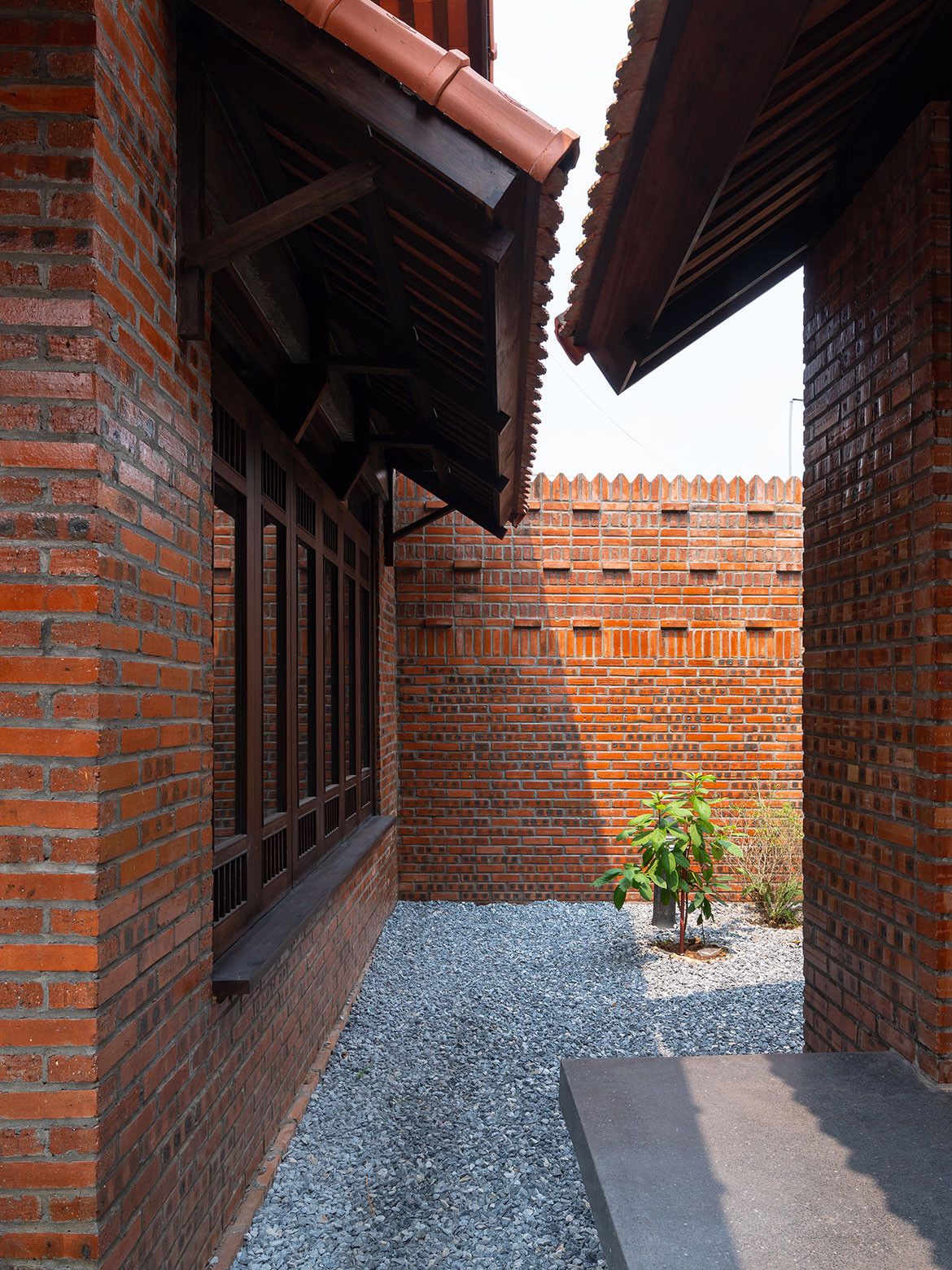 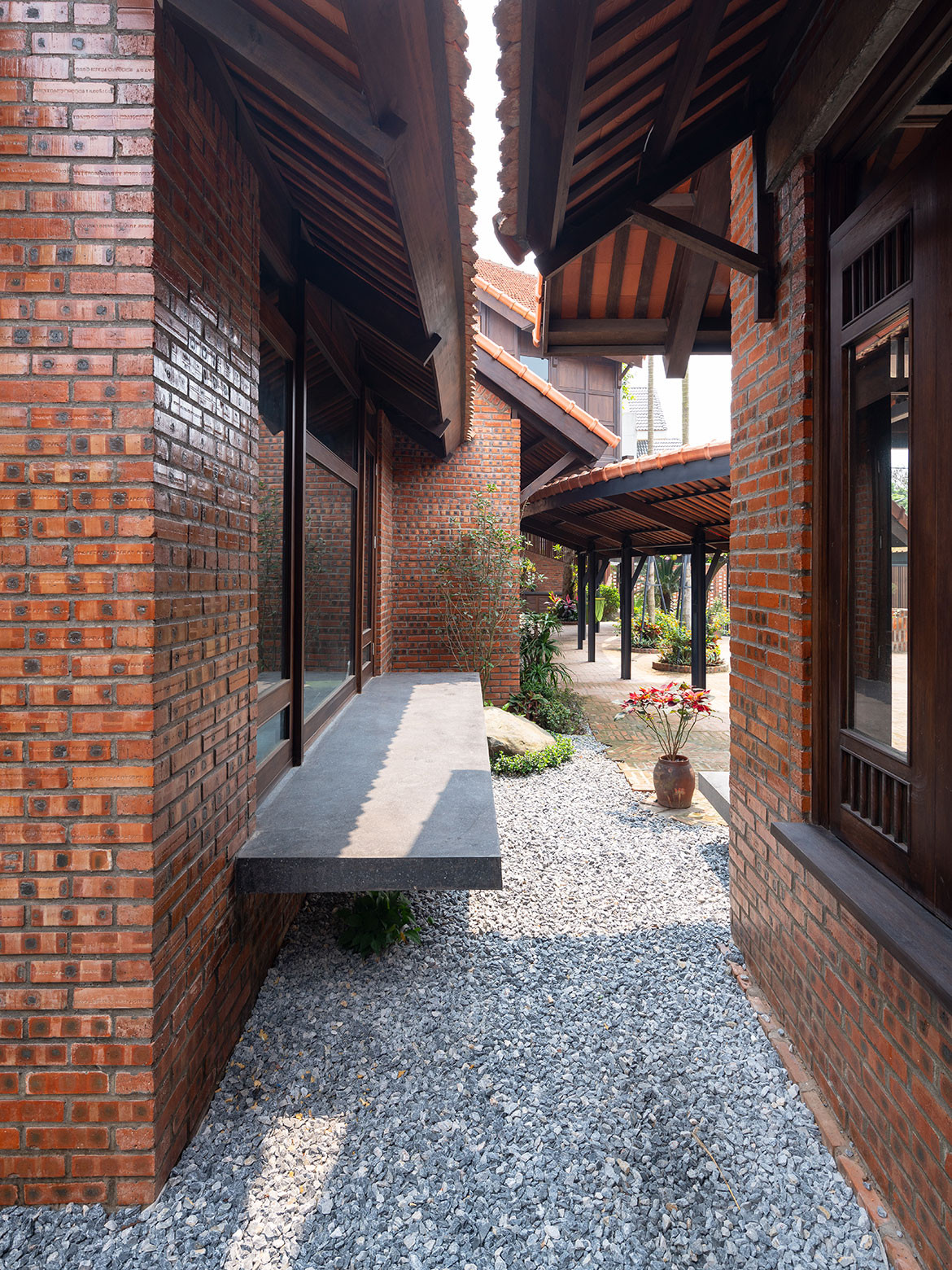 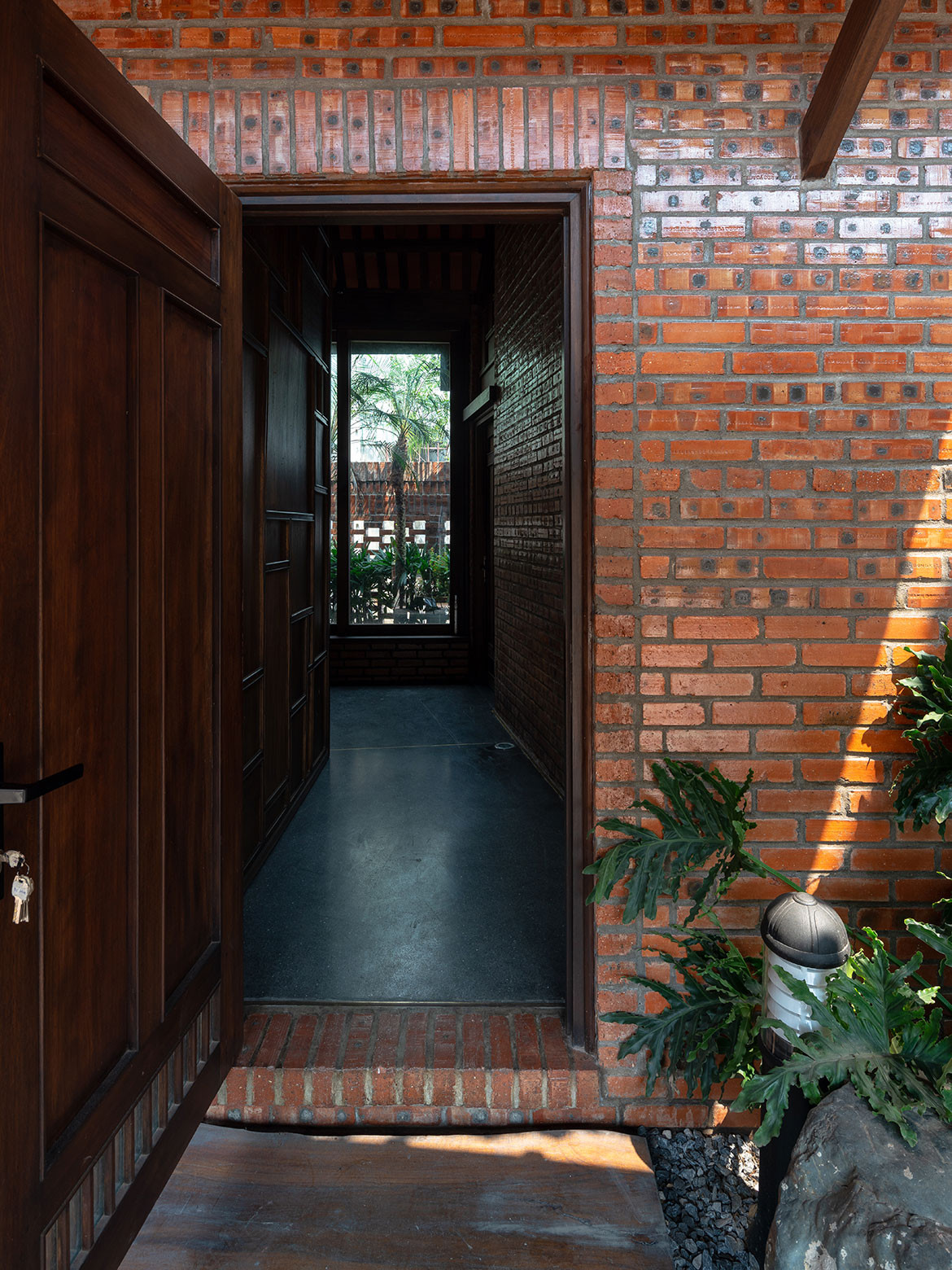 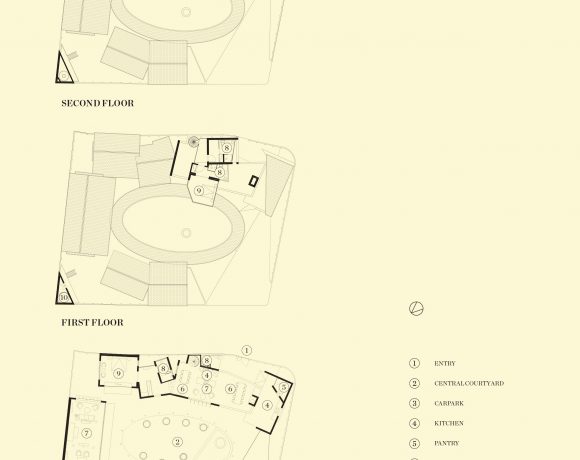