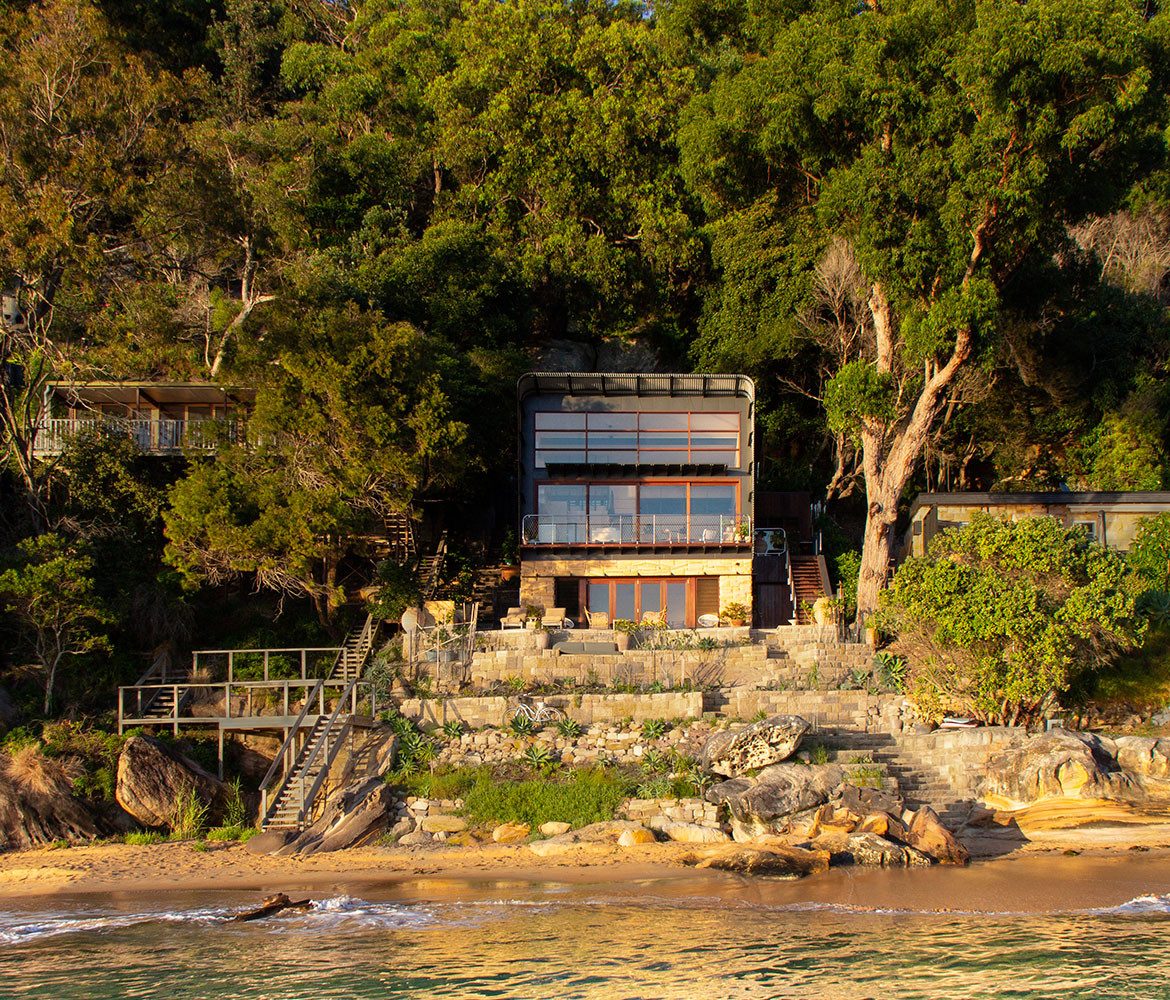 A ten-minute ferry trip takes you from one world to a place and a house where life moves to a slower and more enriching rhythm.

There can be few more magical places. Just over an hour’s drive from Sydney is Pittwater, formed on one side by the peninsula ending at Palm Beach and on the other by a national park, while in between lies the majestic opening to the Pacific Ocean.

Great Mackerel Beach lies at the foot of the national park escarpment and is only accessible by water. To live here is to be part of a special world of extraordinary beauty. So, it is fitting that there be a transition and this is the short ferry ride which, as it approaches the little wharf, gives us the perfect introduction to this modest, but distinctive house.

Hart House’s dark tones enable it to blend in with the escarpment which towers over it and with the rich greenery surrounding it. It is perfectly framed by a handsome Gum on one side and a vivacious Sheoak on the other. Like most of the small number of houses at Great Mackerel Beach, it sits directly above the water of the bay and is cut into the hill, sitting on a sandstone base. 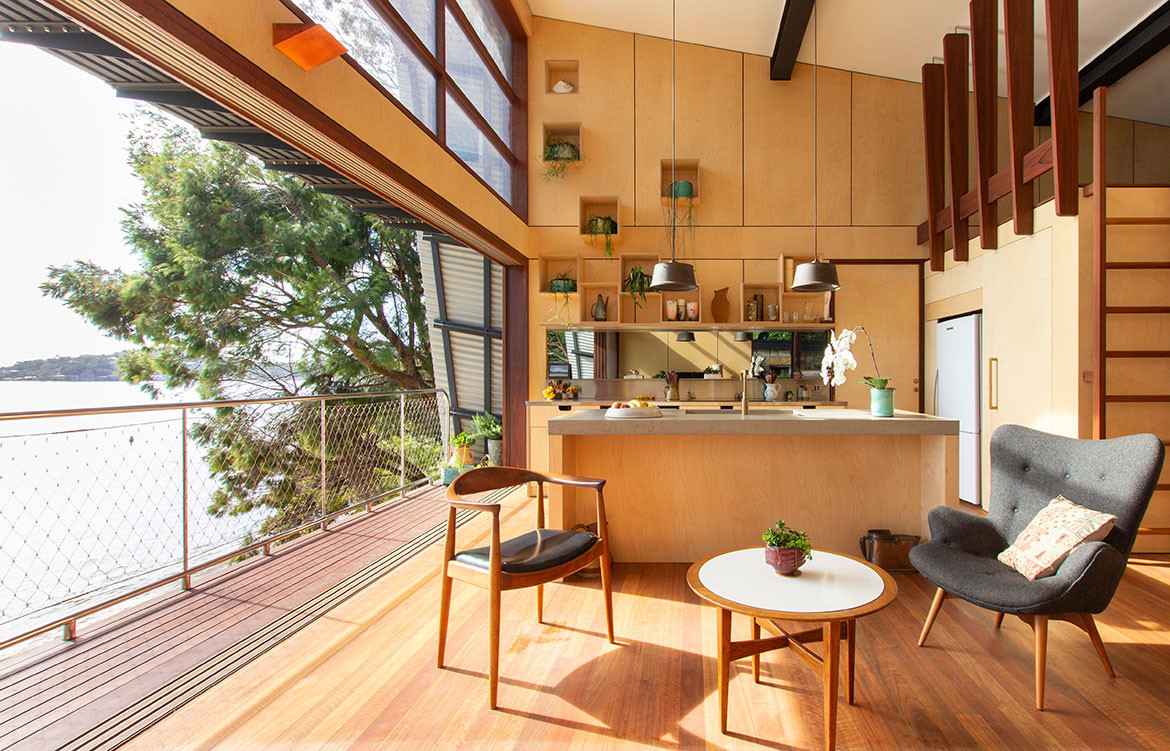 The base, in fact, is a series of terraces made from sandstone blocks cut from the site. Wrapped in a corrugated metal shell, the house, in the words of architect Rob Brown, is like “a shell on the beach with the animal coming out of it”.

Rob has himself owned a house here for 12 years and built another distinctive house just a little further along the beach 18 years ago. This experience helps, he says, getting to know the finer points of living in this little piece of paradise – like the micro-climate and the rhythms peculiar to the place such as the half-hourly ferry arrivals and departures.

The house he describes as a warm shell with a panoramic view. In fact, at 120 square metres it is very small but feels big because of the way it opens up to the vista of Pittwater and the 5.5 metre-height of the upstairs living/dining/kitchen space with its sliding doors and high windows. Here, a sandstone terrace extends the living area and neatly crops the beach below to ensure privacy from passersby. The orientation is north-east with the view edited to the north-west by the headland of the bay. But the architect has inserted a neatly scaled square window high on the wall to capture the afternoon light and trees outside. On the outside, this window, along with the house entry, is framed by a Corten hood whose rusting patina helps the house blend with the surrounding forest. 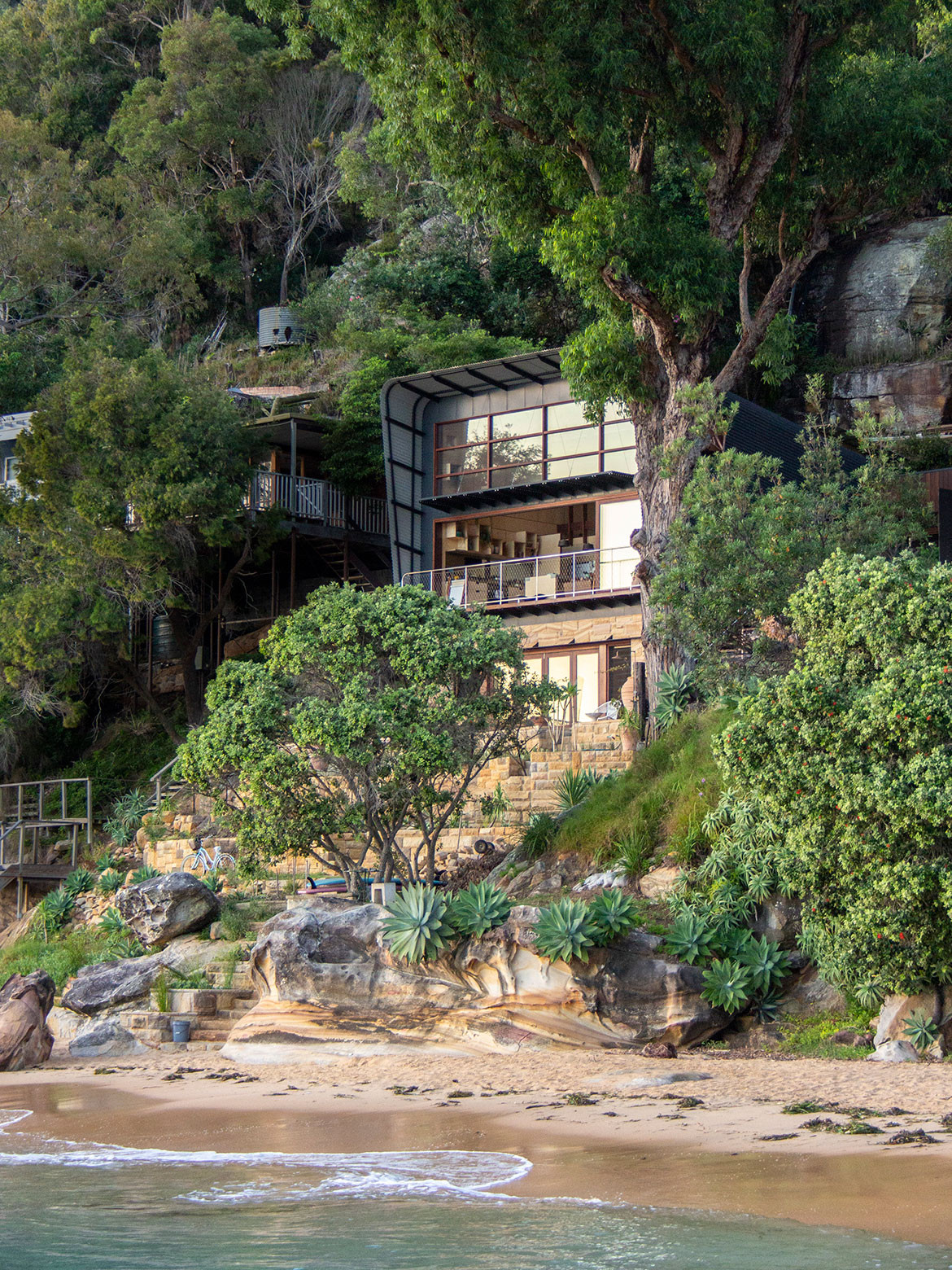 This forest includes a magnificent Moreton Bay Fig which looks down on the solar panels which cover the roof – although invisible from the front because of a nicely judged rake to the roof. In this location, every household has to be largely self-sufficient and these panels provide most of the house’s power. In winter, because of the maritime climate and the house’s orientation to the north, the house requires no heating.

Originally the lower level of the house was a plant room (although an earlier build was never completed). This is now the bedroom – there is another small guest bedroom upstairs and a small loft sleeping area for children above the kitchen area. Birch ply is used for all the cabinetry, including an intriguing wall of backlit timber vitrines designed by Caroline Casey, each holding ceramics designed by one of the clients. The flooring is Spotted Gum, combining to create, says Rob, “a rich, but light, internal feel”.

“Time does stop a bit,” says Rob, of living in paradise. It certainly slows you down with the gentle breaking of waves, the quietly circling sea eagles, the silent ferry going about its business and the diurnal transit of the sun across a timeless marinescape. 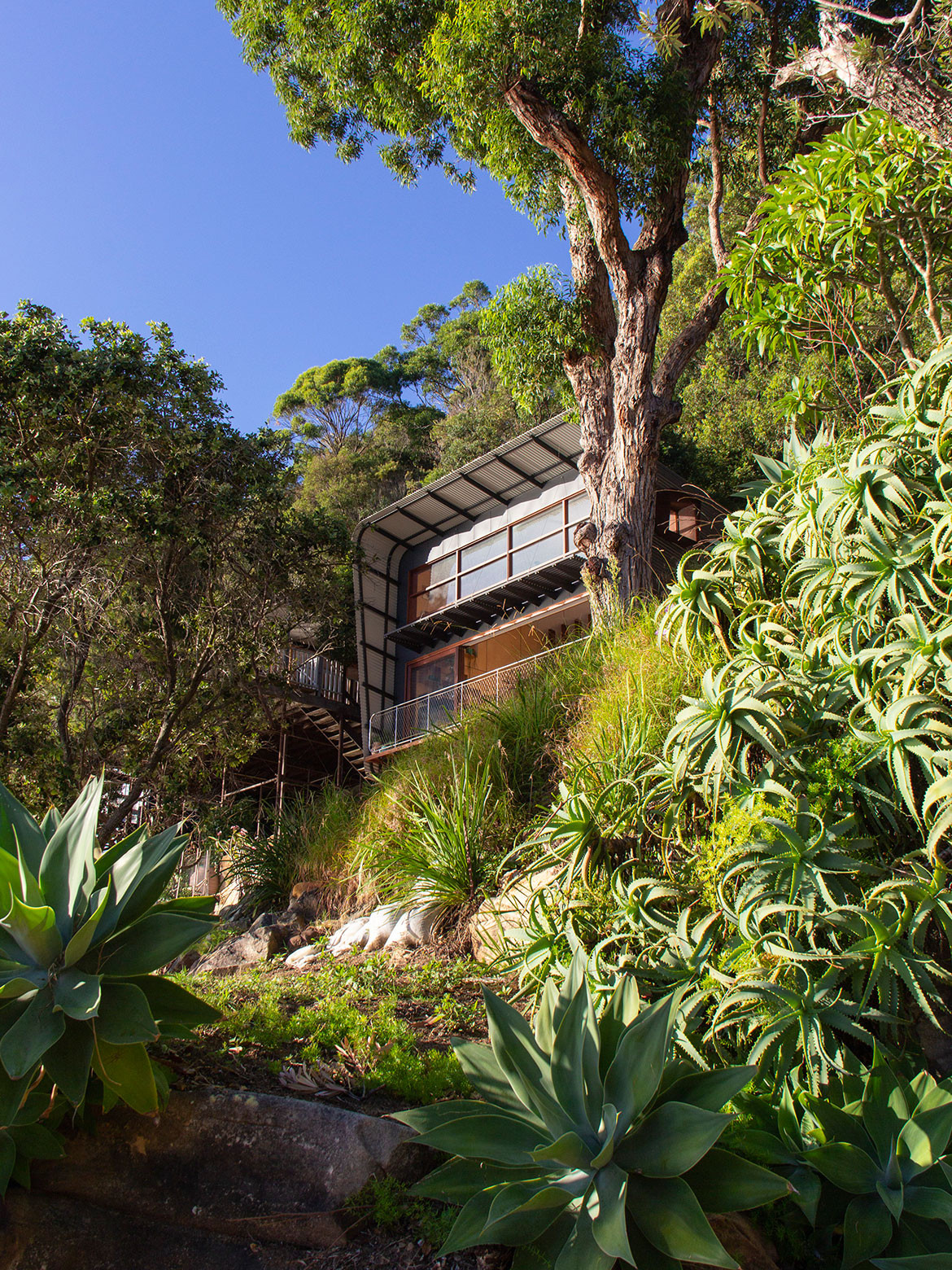 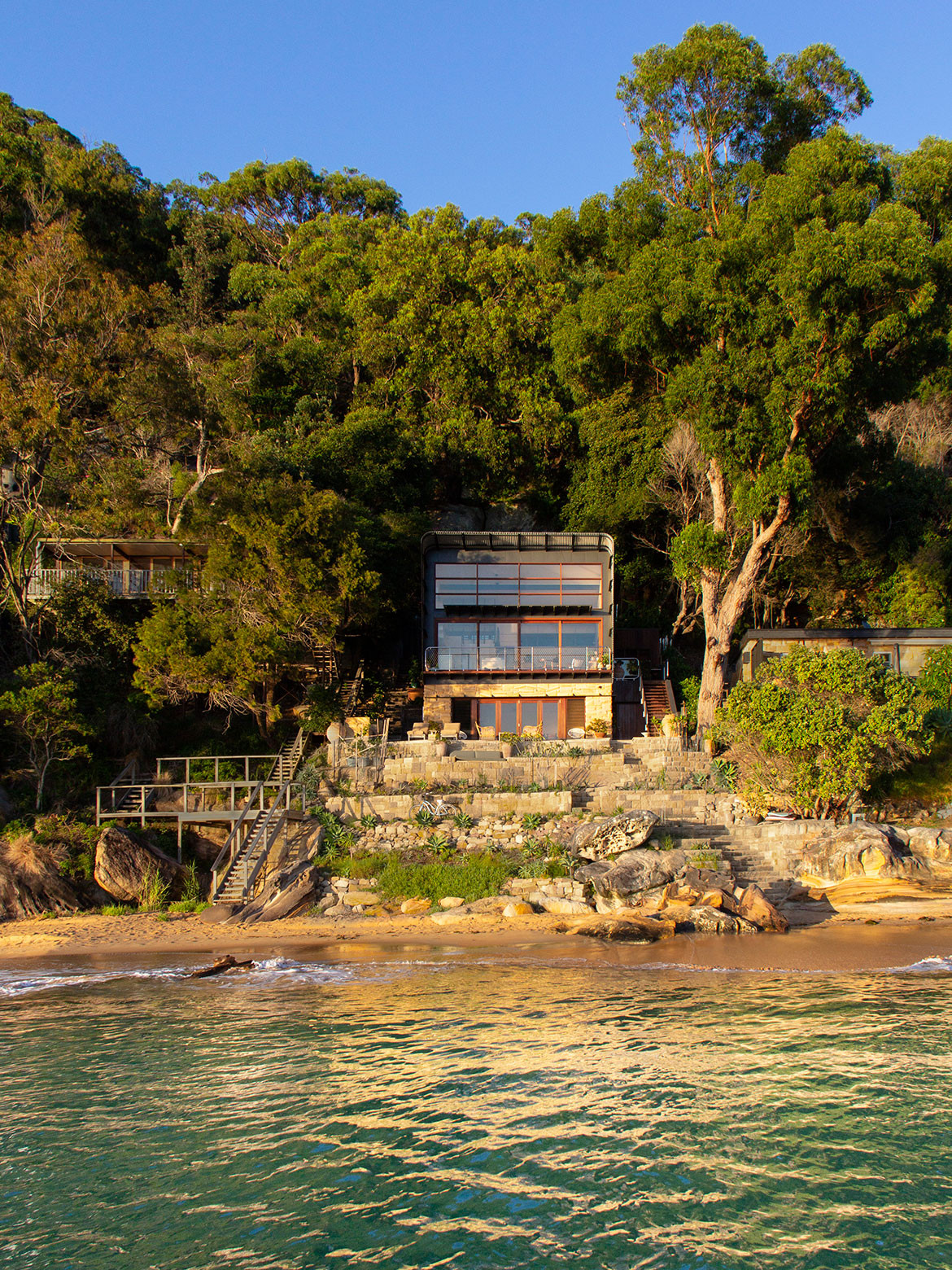 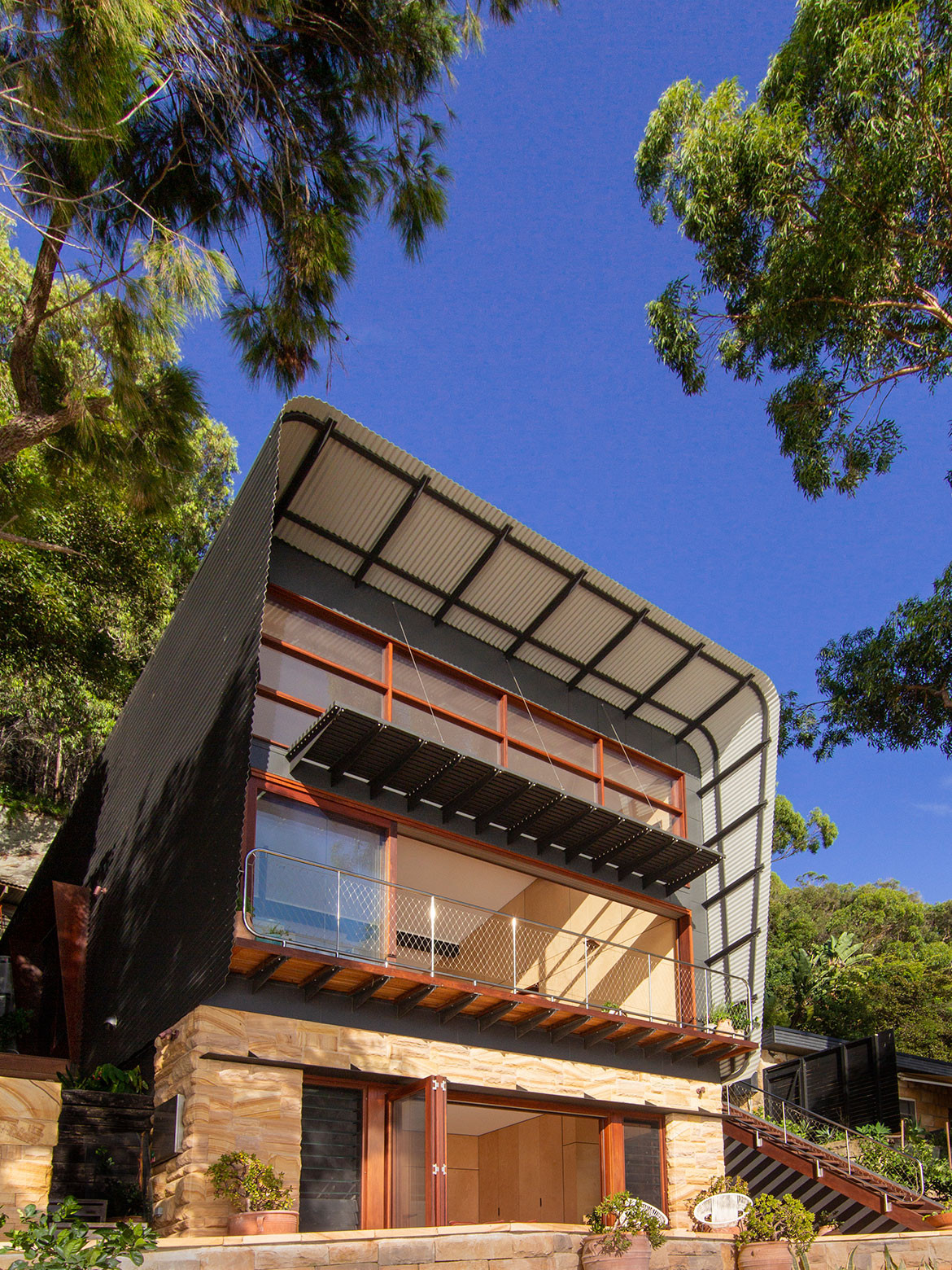 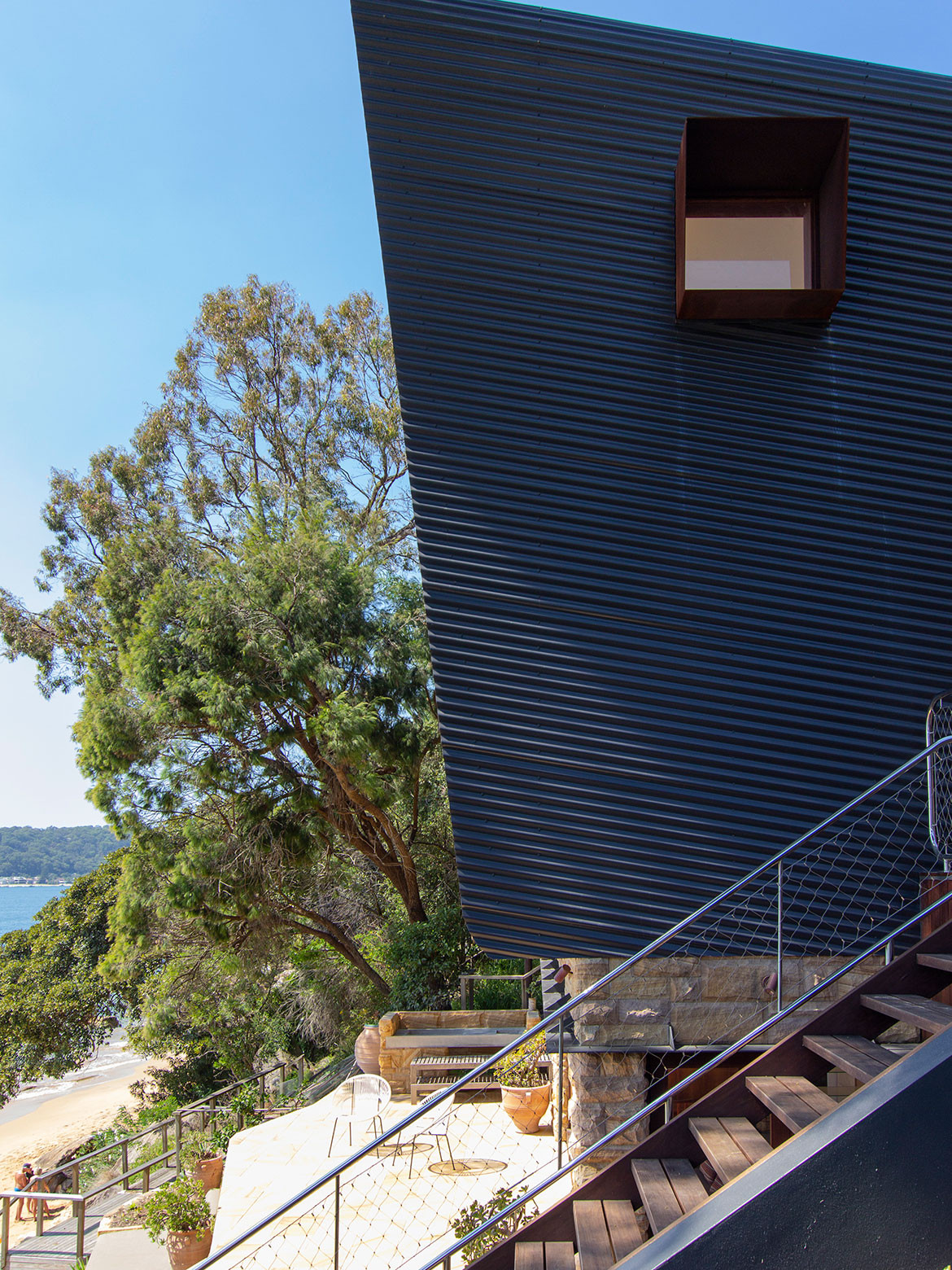 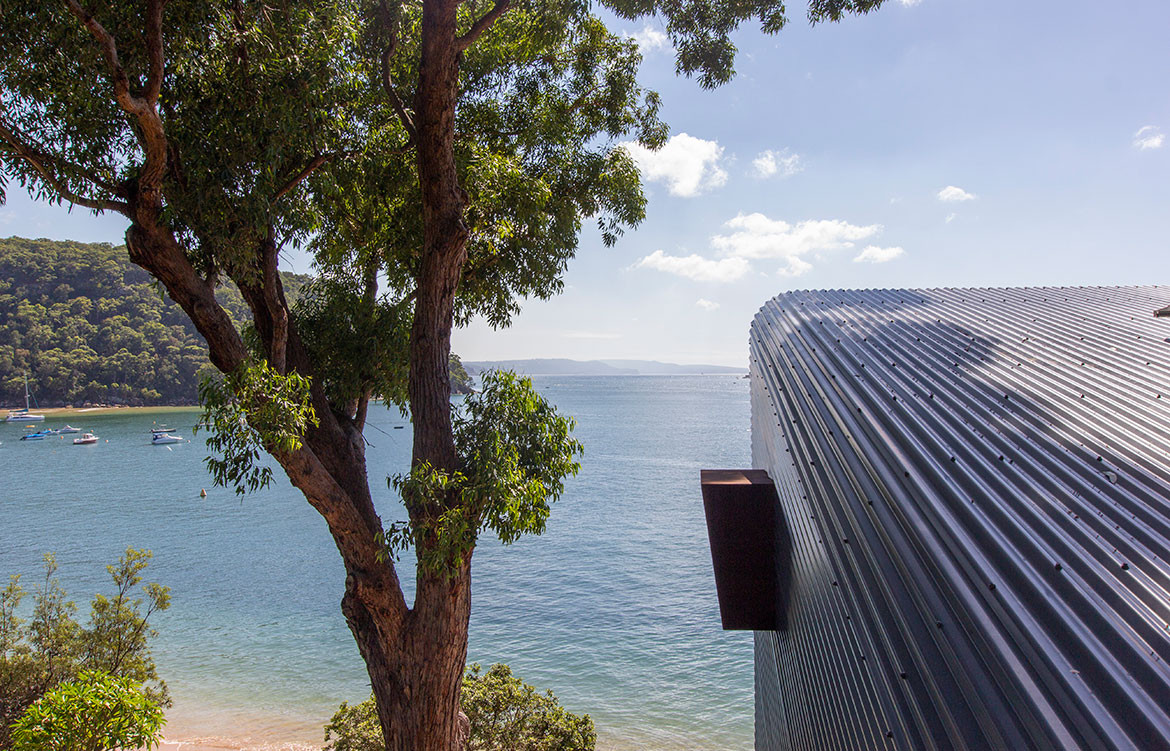 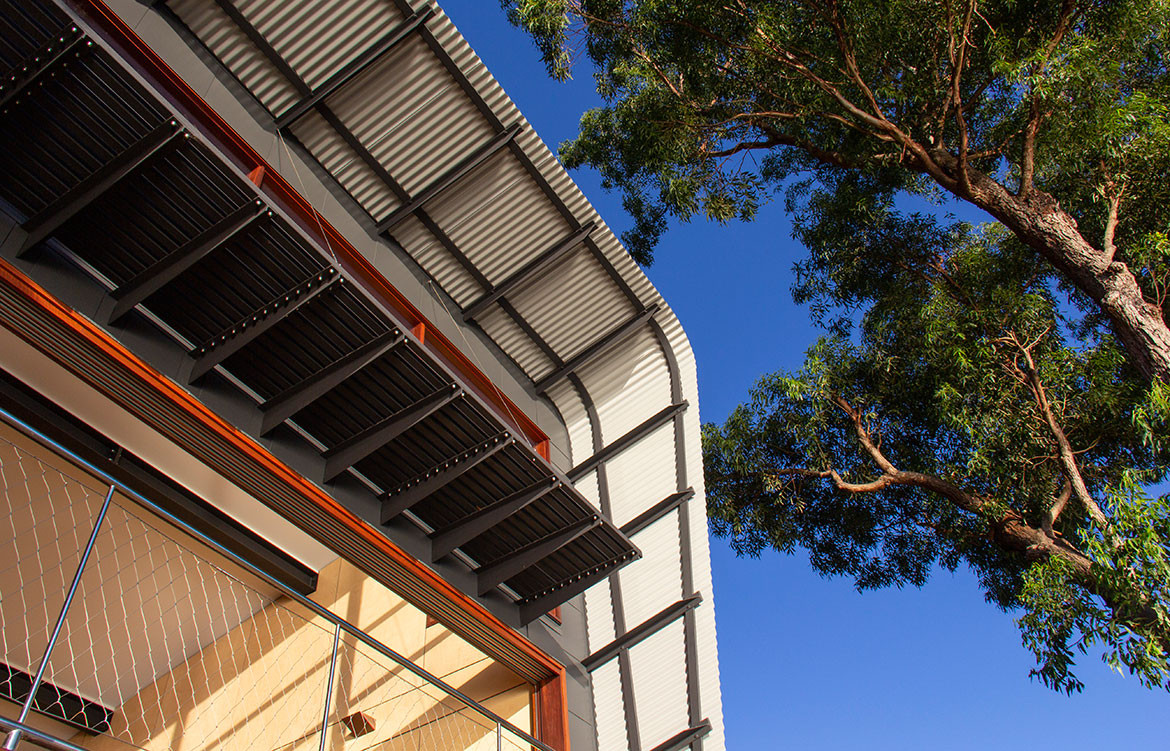 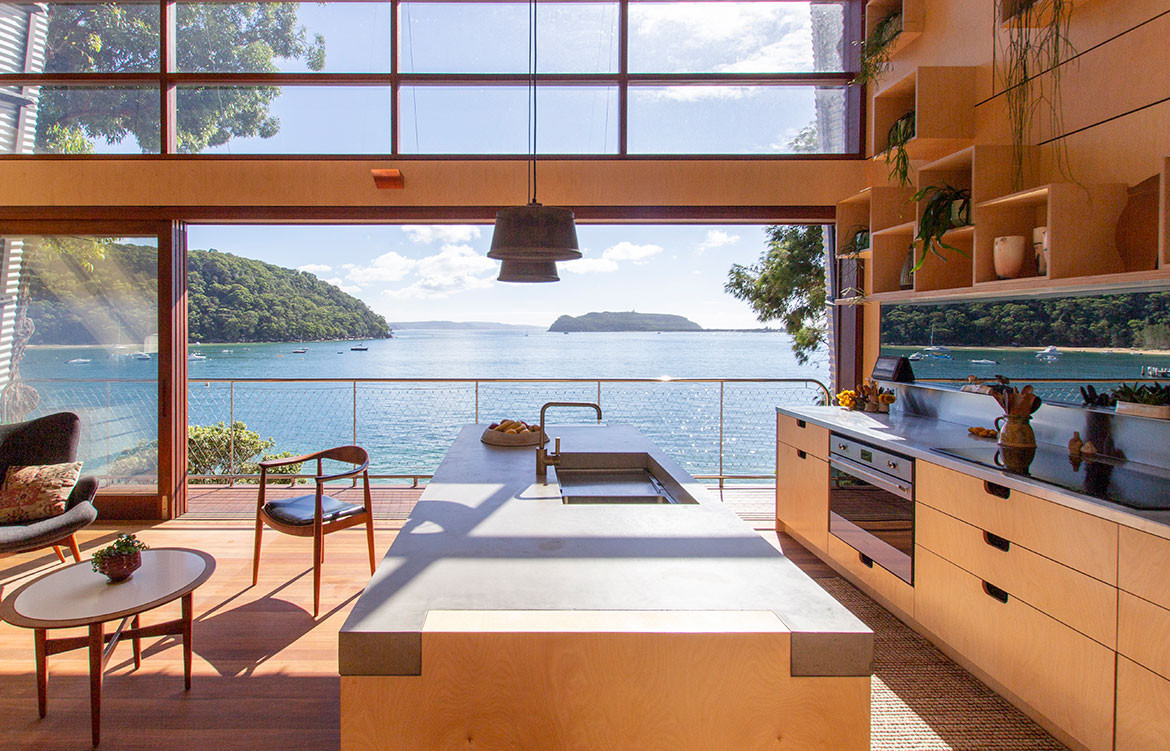 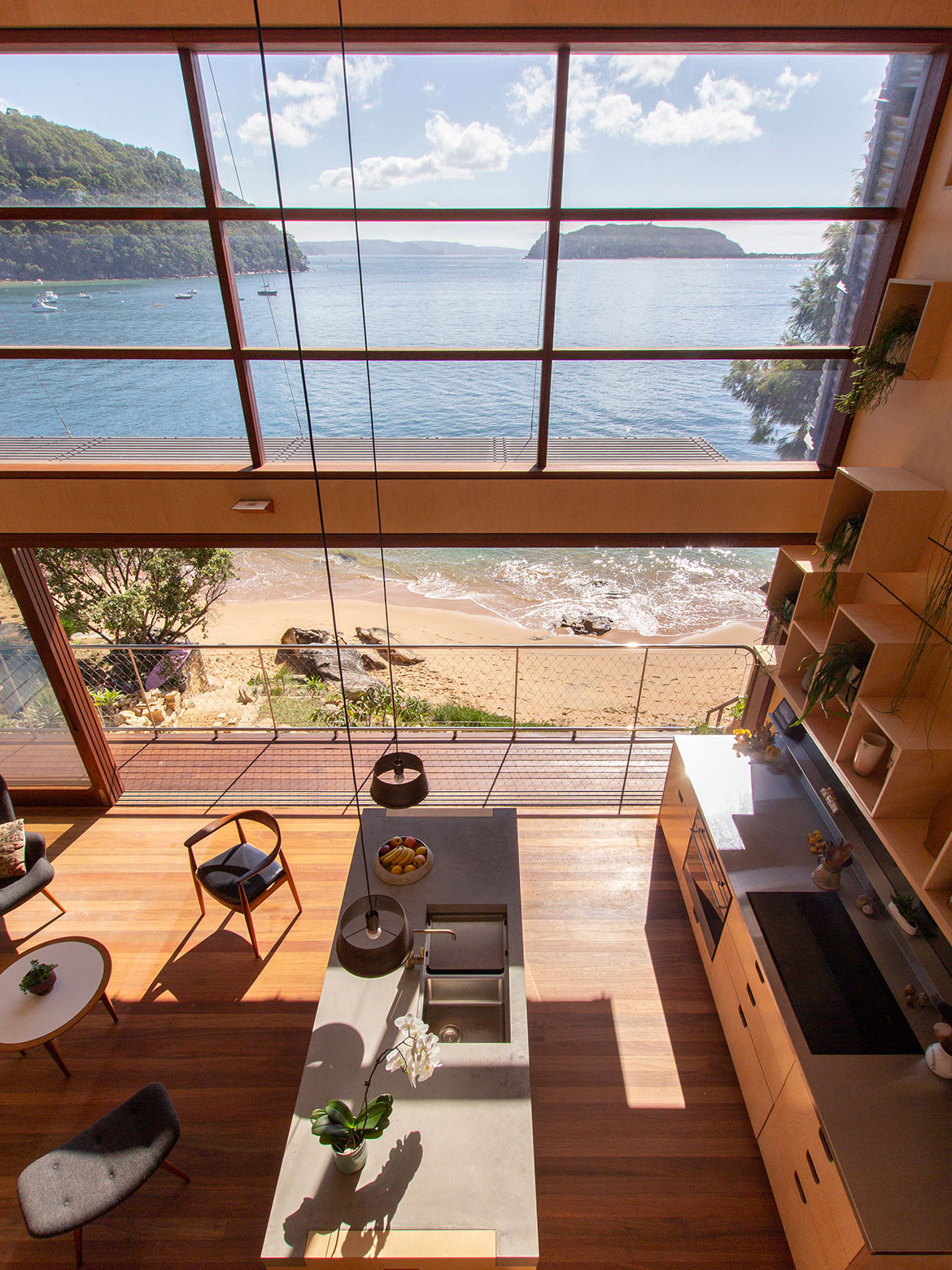 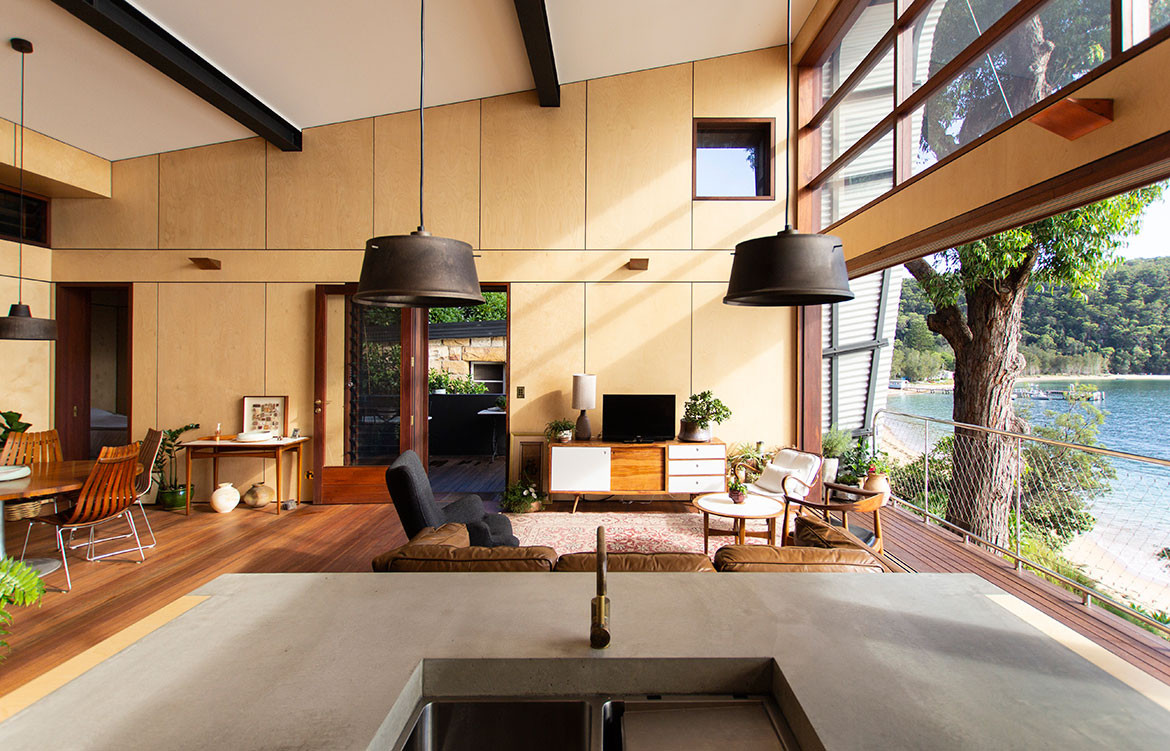 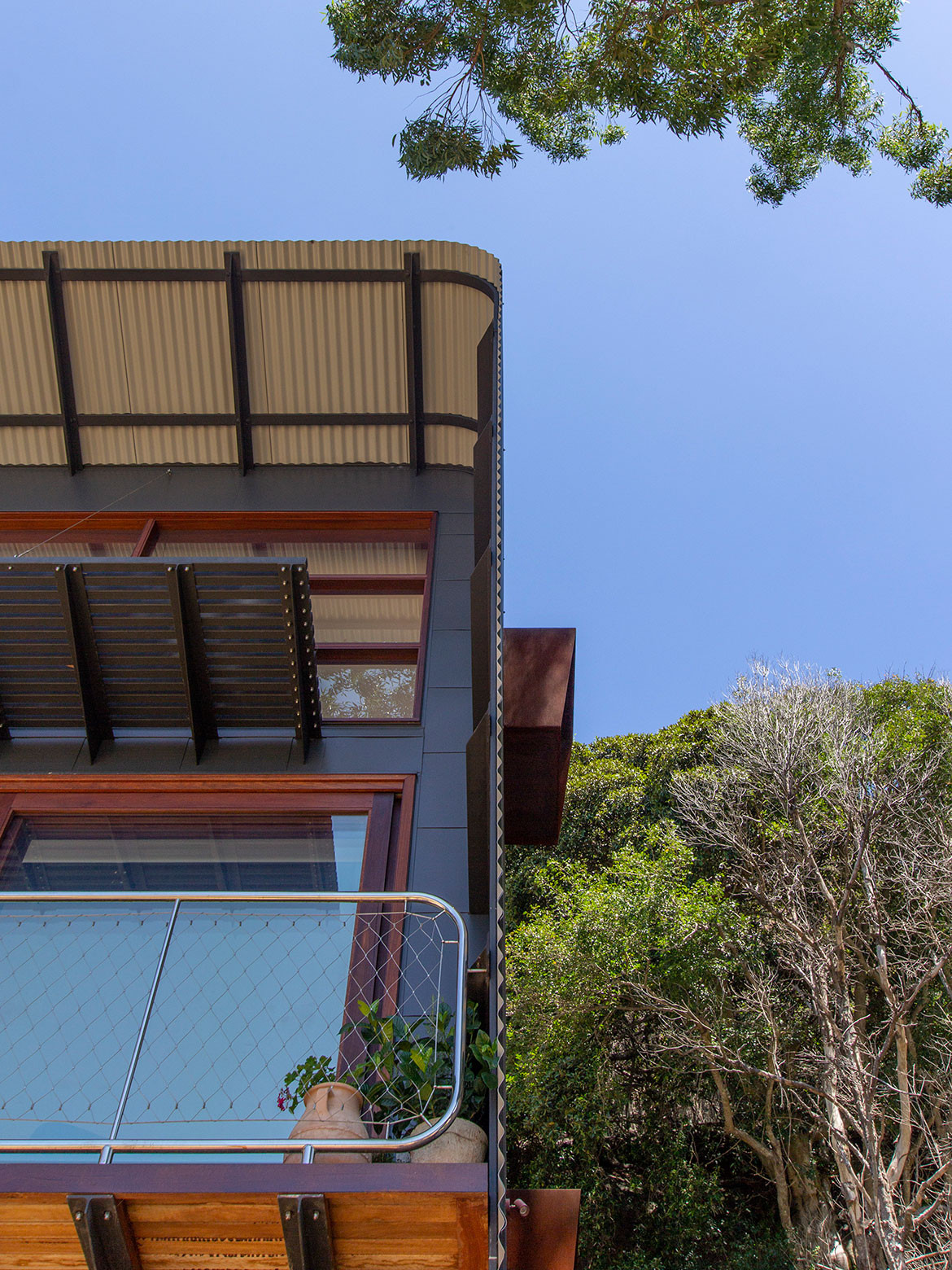 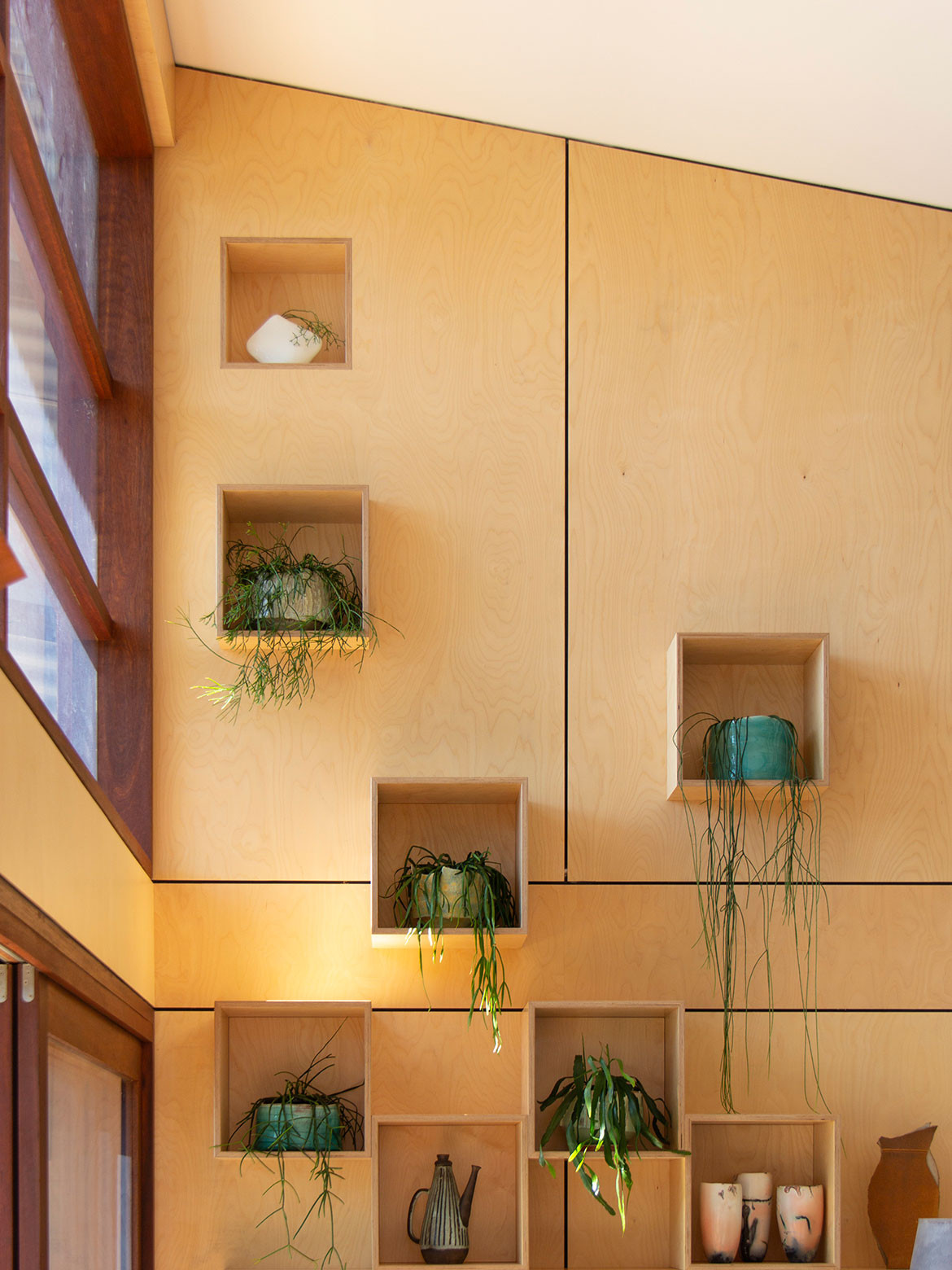 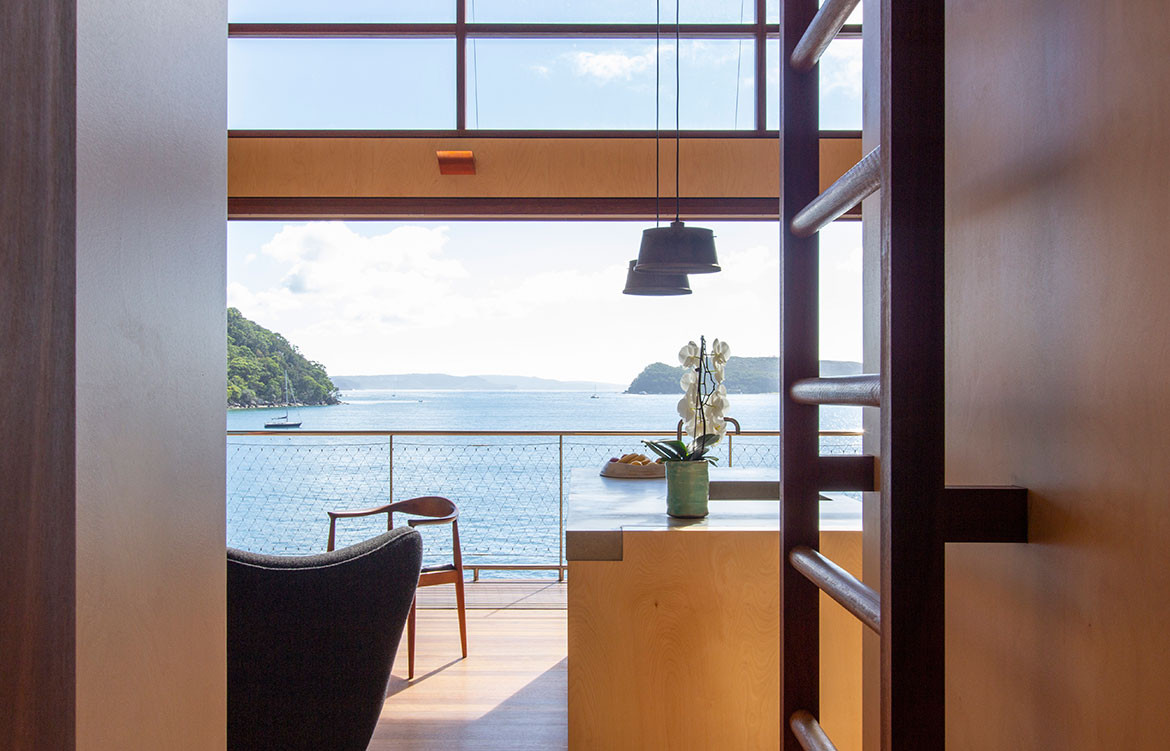 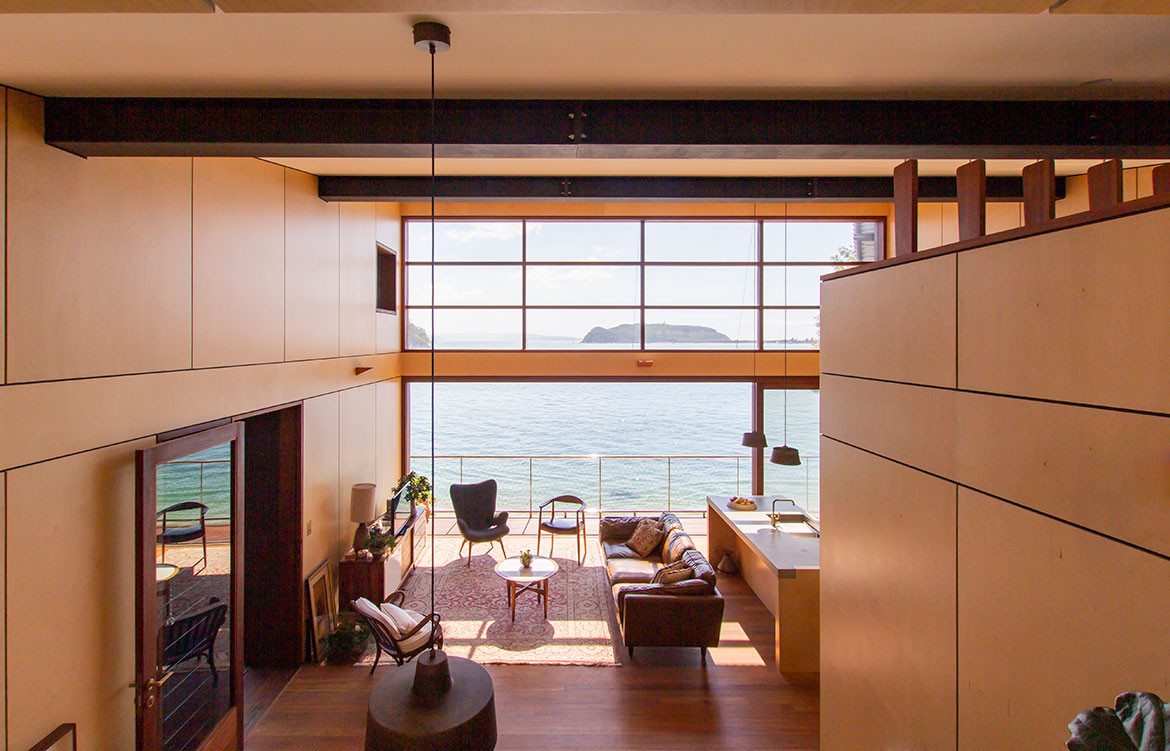 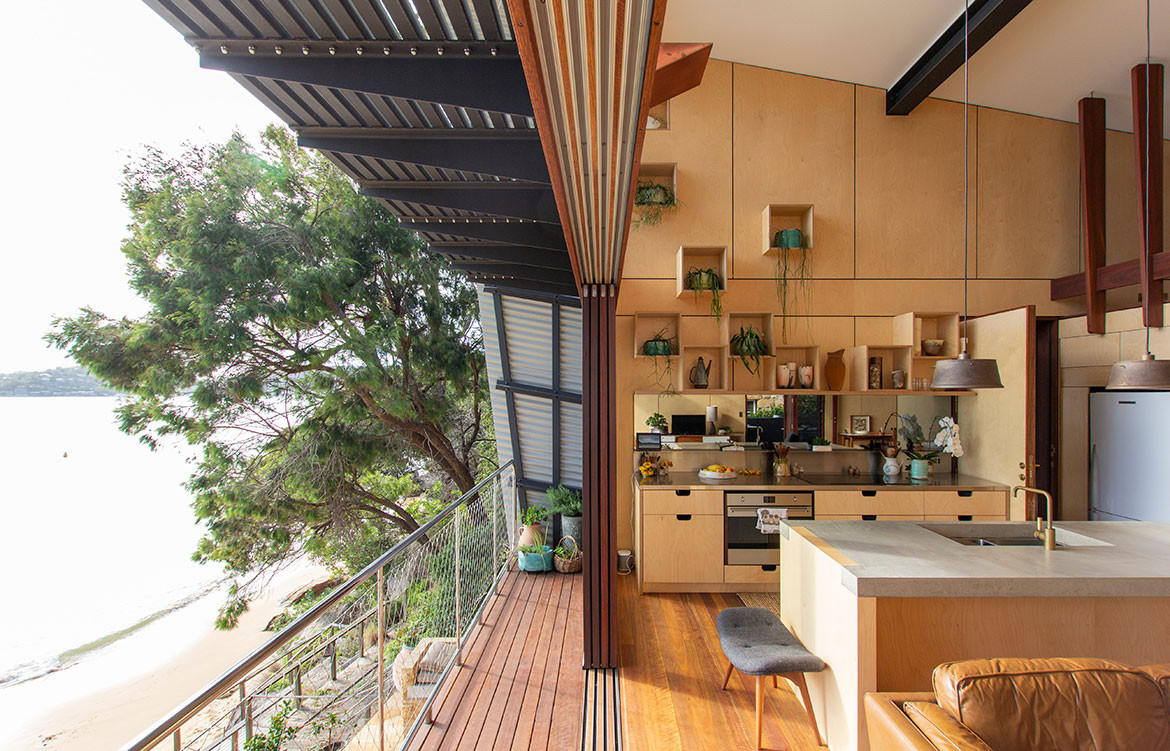 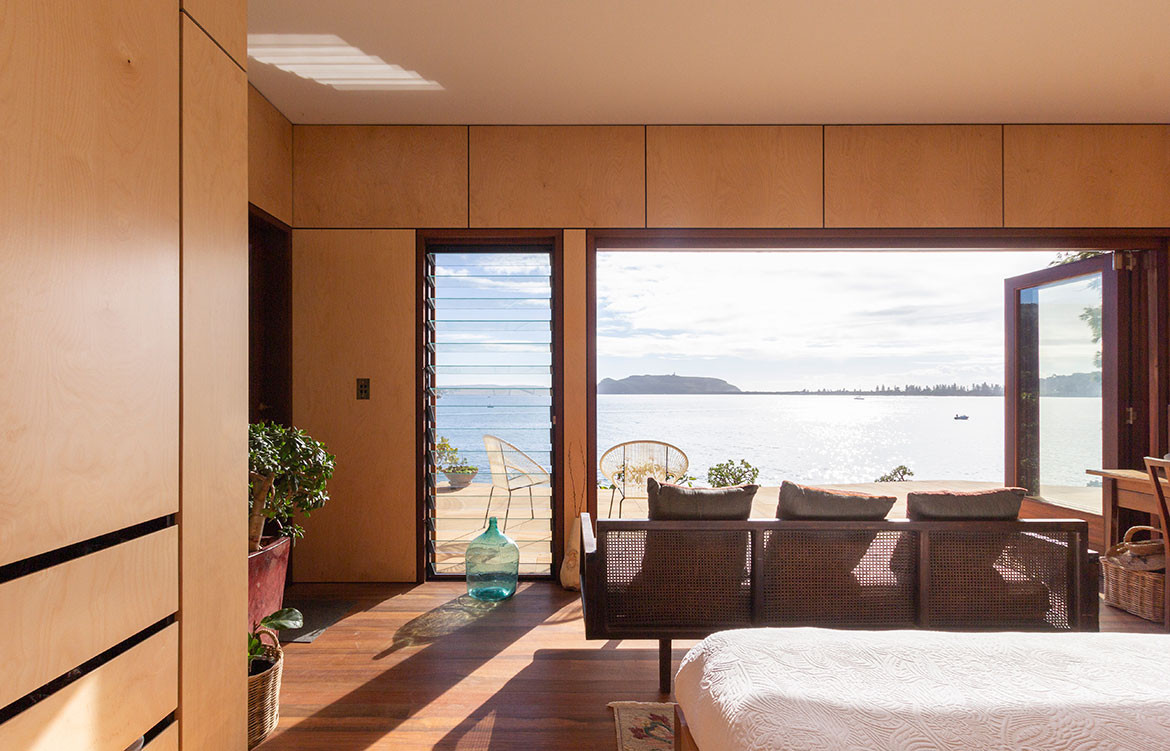 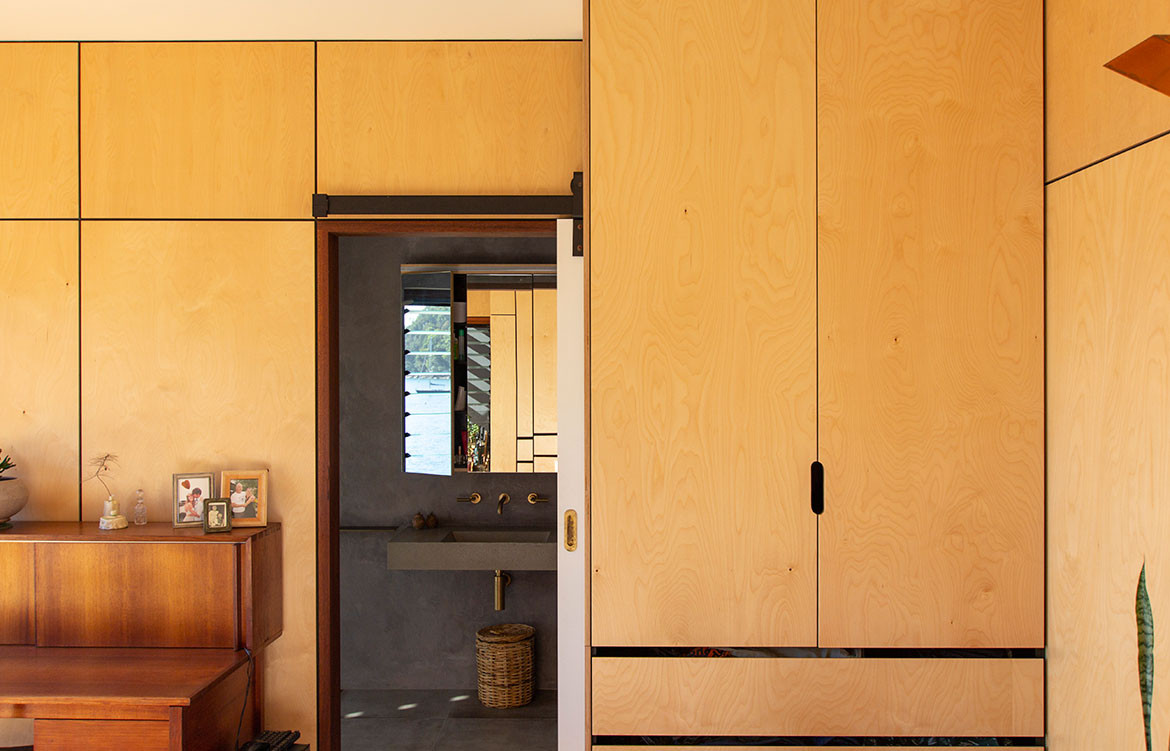 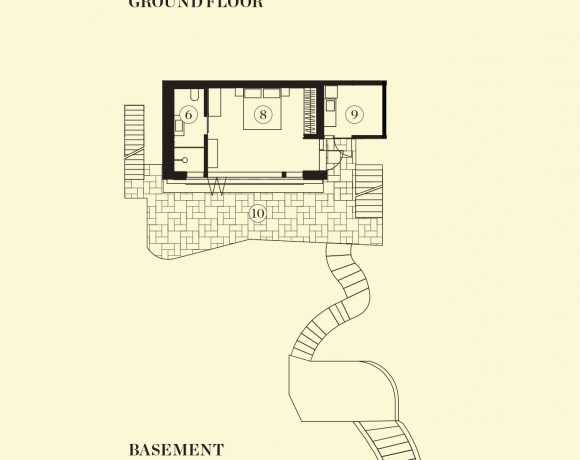