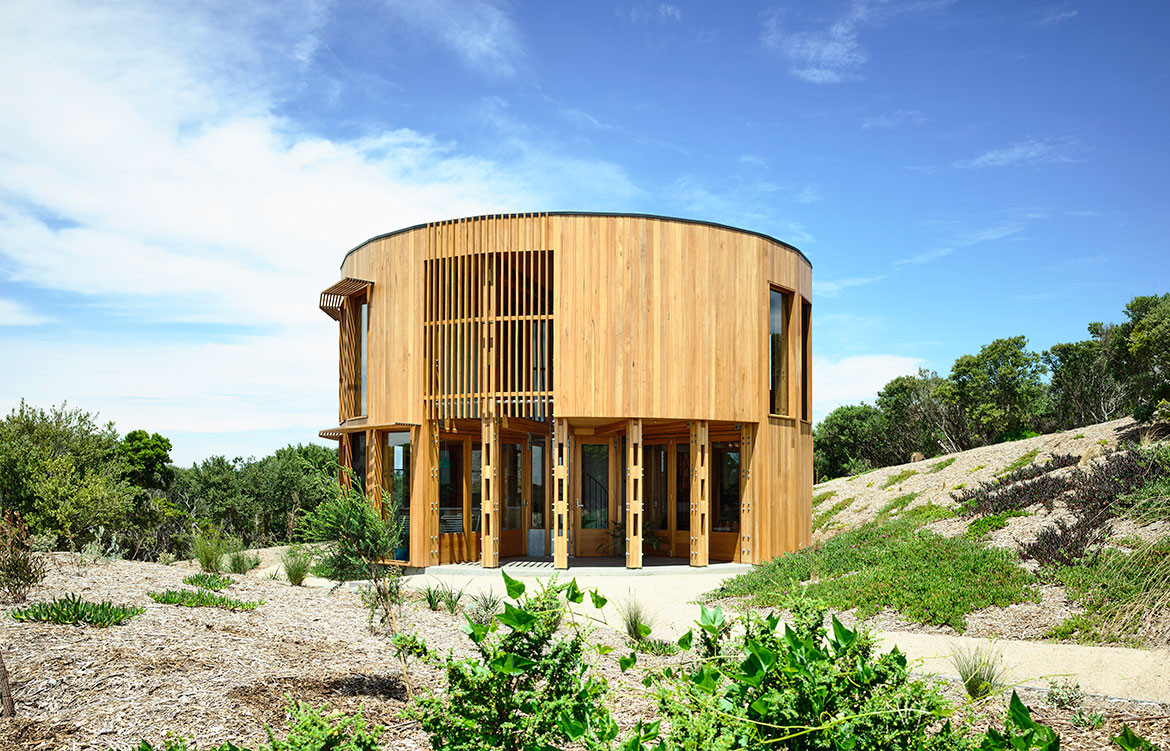 Once an improvised shack with minimal amenities, this contemporary beach house has become an opportunity for place-making.

Beach houses offer an escape from the city or urban pad. This beach house by Austin Maynard Architects highlights the contrast between home and holiday, but also demonstrates that it’s not all about size. Located amongst the sand dunes at St Andrews Beach, a one-and-a-half hours drive from Melbourne, the modest home (approximately 140-square metres in area) offers a unique beachside experience.

Nestled within the dunes, surrounded by ti-trees and the humming of waves from Bass Strait, this house, designed in the round and clad in timber, offers a retreat from urban life. Designed for a couple who have had their first child, this beach house is a reminder that sometimes it’s the simple things that make for an idyllic holiday.

“Our clients came to us with a sketch, slightly trapezoid in shape. The opening comments referred to a ‘bach’, a term used to describe weekenders in New Zealand,” says architect, Mark Austin, co-director of Austin Maynard Architects. “Owen and Belinda [the owners] didn’t want to replicate a city house by the sea, but rather something that was quite raw, slightly rough,” he adds. “Belinda is a Kiwi which led to the idea of a bach. Shack seemed inadequate and as you can see it’s very different from the typical beach house,” says Owen. ”You could say it’s a bolt hole amongst the sand and scrub.”

Although the sketch and accompanying words were taken to heart by the Austin Maynard team, a round shape was conceived for the design, rather than the skewed shape initially presented. “We wanted to take in the entire view of the dunes (bordering a national park) as well as create a form that felt ‘comfortable’ in this landscape,” says Mark, pointing out the curvaceous and sinuous dunes surrounding this home.

Simply arranged over two levels, St Andrews Beach House comprises a kitchen dining and living area at ground level together with a laundry/guest powder room. On the first floor, connected by a circular steel staircase, are three spaces that can be opened into one or separated by a curtain, enclosing a bunk bed, a second bedroom or a breakout area. “Initially the brief included three bedrooms, but it made more sense to create a level of flexibility that could accommodate guests or simply be for themselves,” says Mark.

Although the circular form resonated with Mark and his colleagues, it proved to be more challenging than simply going ahead with a more traditional orthogonal form. The kitchen, for example, features an island bench that tapers at end to create an entrance into the kitchen. Likewise, the bunk beds on the first floor taper at their feet in order to fit into the circular arrangement. “In a sense, once we established this form, we then created a series of rules for ourselves that had to be appropriate for this model,” says Mark.

The spaces are relatively modest in comparison to most beach houses built today. However, the rules did allow the practice to create new forms within the circular format. The front porch, for example, features a central door and is framed by two sets of bi-fold glass doors. When both sets of doors are left open, as they are during the summer months, the division between inside and out is blurred, together with the delineation of rooms inside. And instead of traditional doors that carve up the spaces, the chunky timber beams, expressed with bolts and plates, act as thoroughfares.

Although the Roy Grounds House at Olivers Hill designed in the 1950s by Sir Roy Grounds himself, comes to mind – being round and clad in timber – this home actually found more inspiration in a previous Austin Maynard design for a round house that never came to fruition. “We weren’t really thinking of the Grounds House, but we were thinking of the more humble beach shack or as our clients refer to it as a bach,” says Mark, “a place that offers the opportunity to experience the coastal environment,” he adds. For the owners, this beach house is the ultimate retreat. “It’s a place to recharge our batteries and not think about the pile of emails sitting in our inbox,” says Owen. 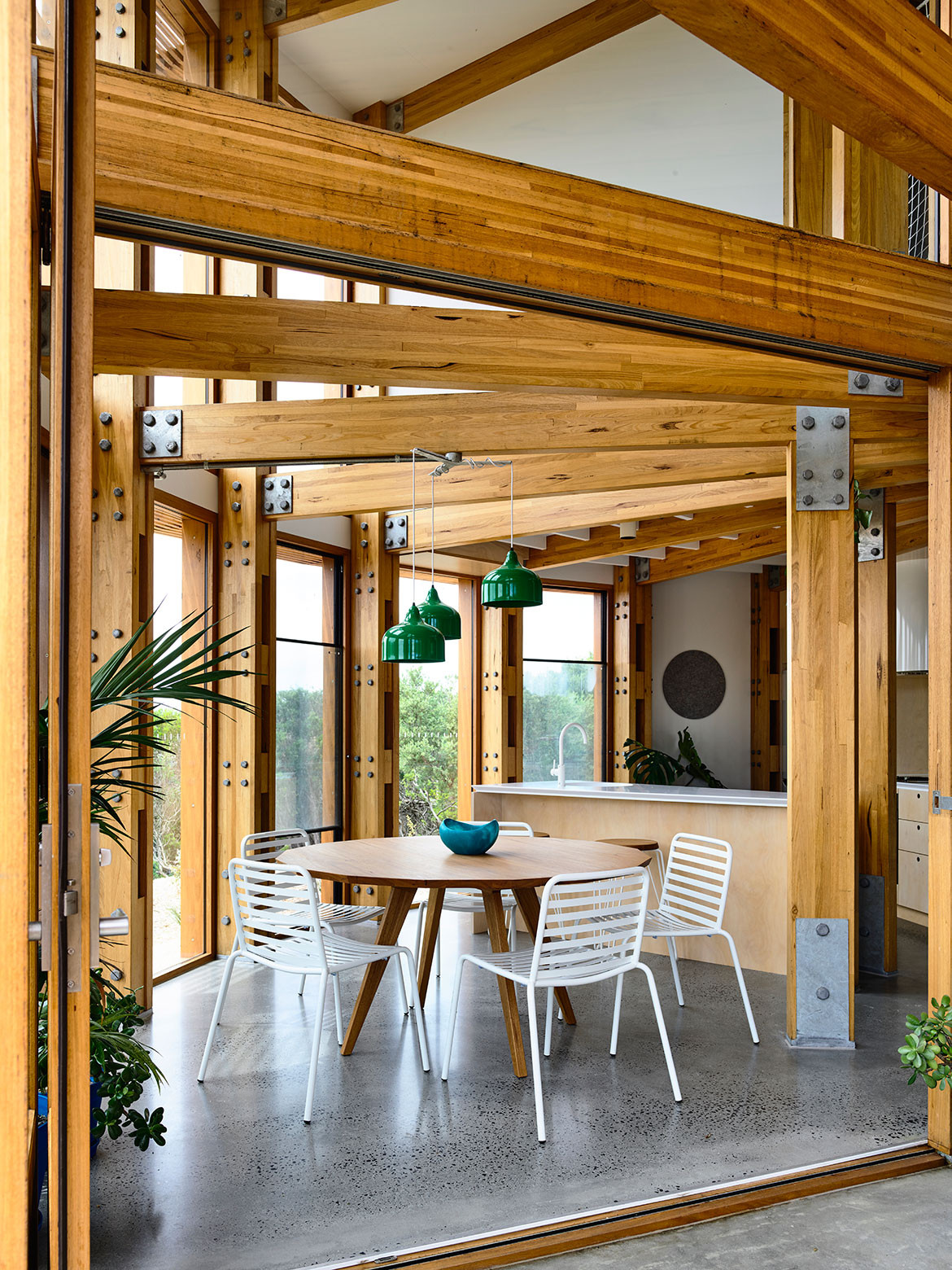 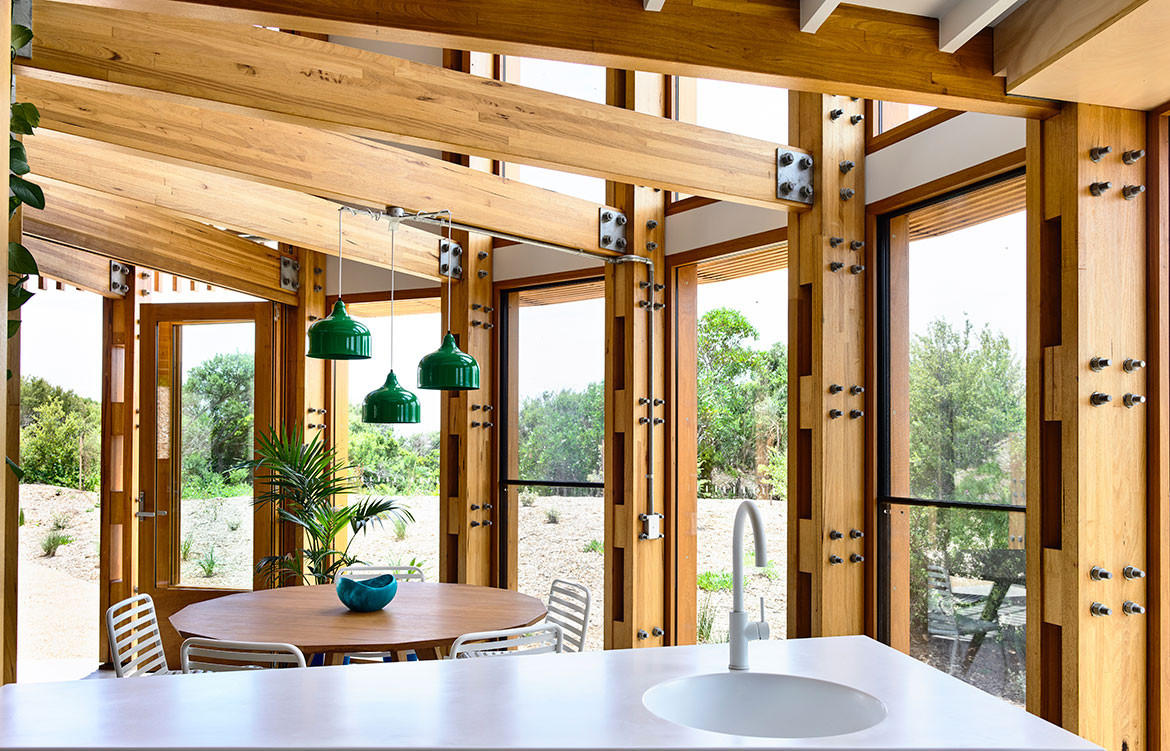 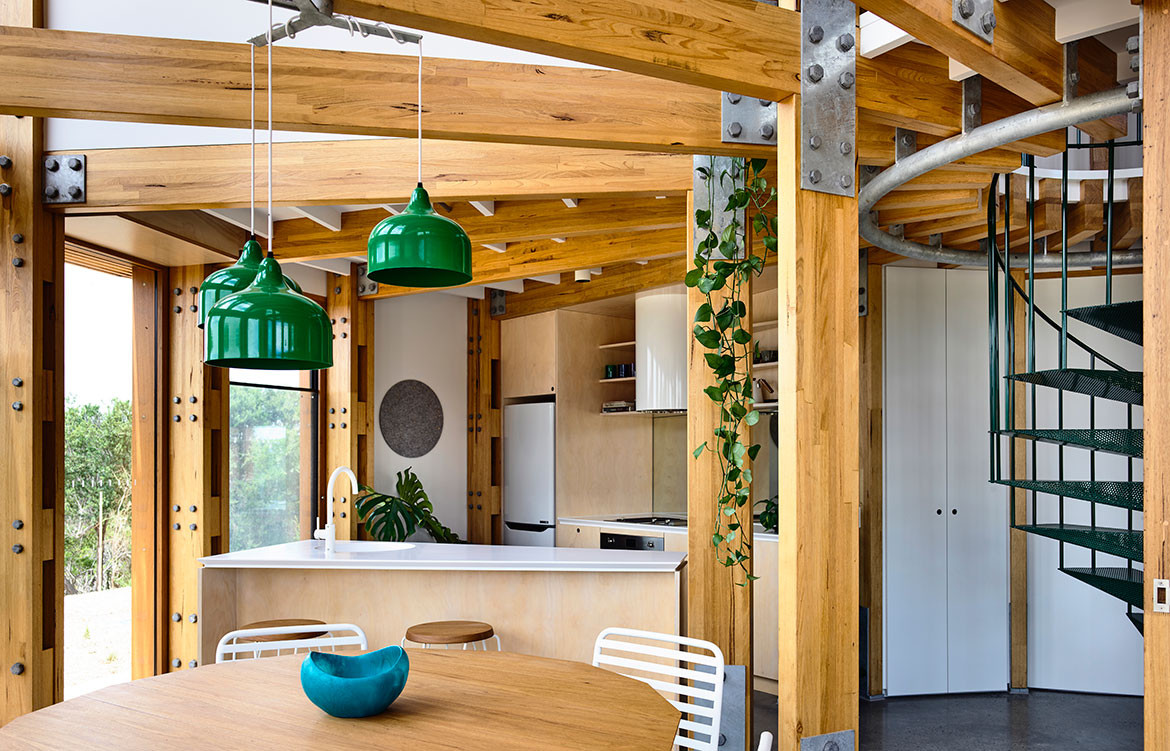 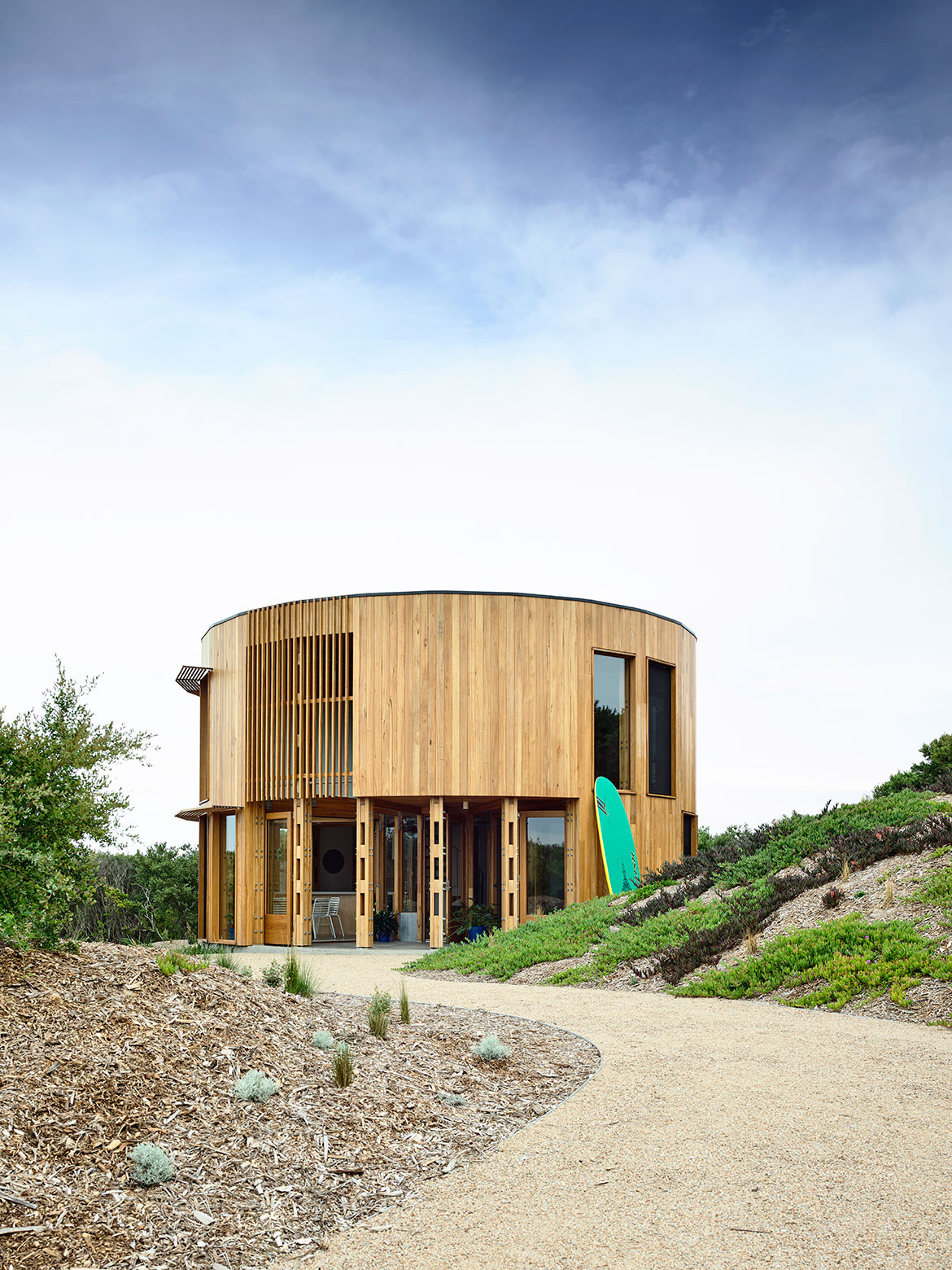 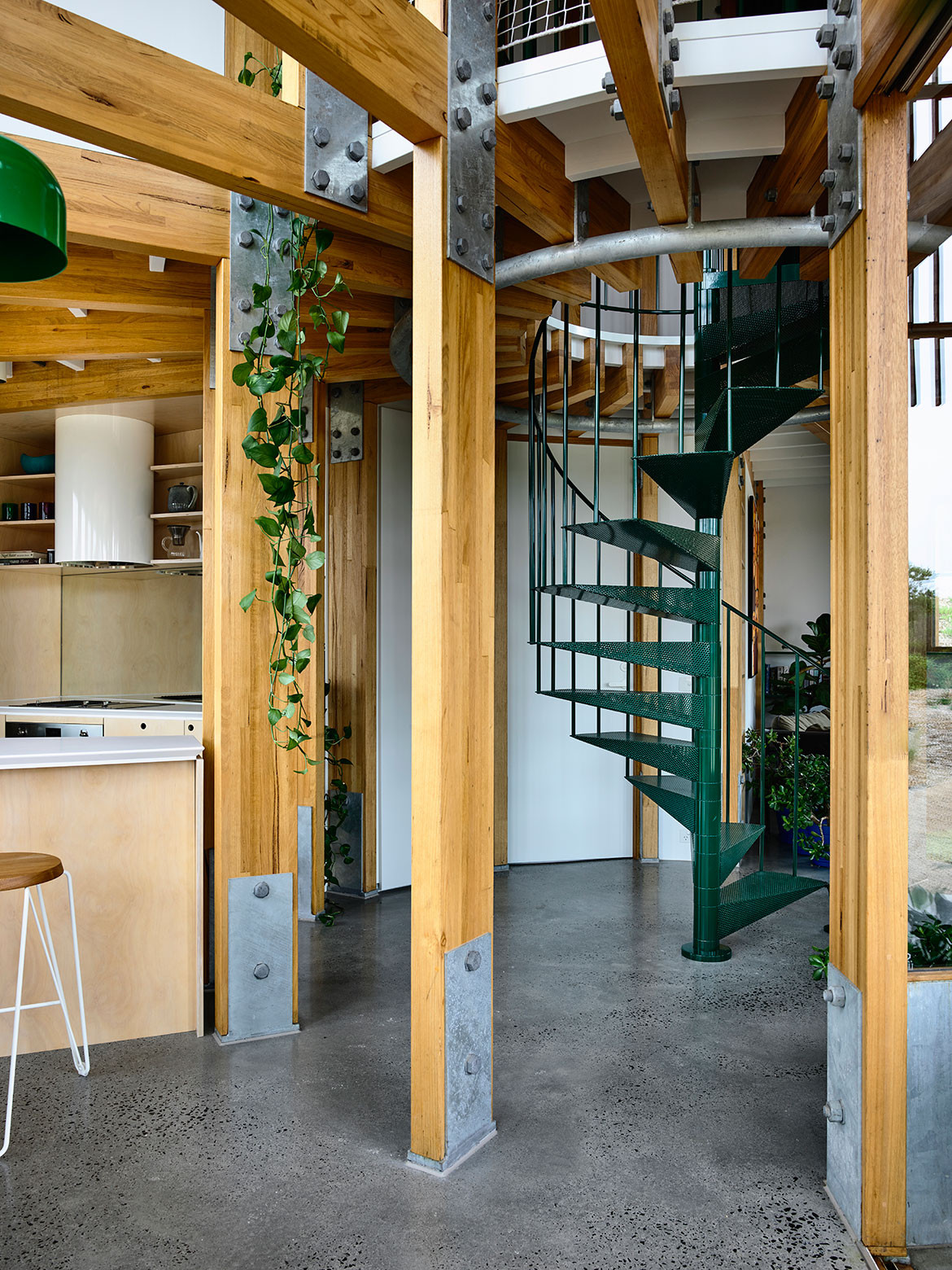 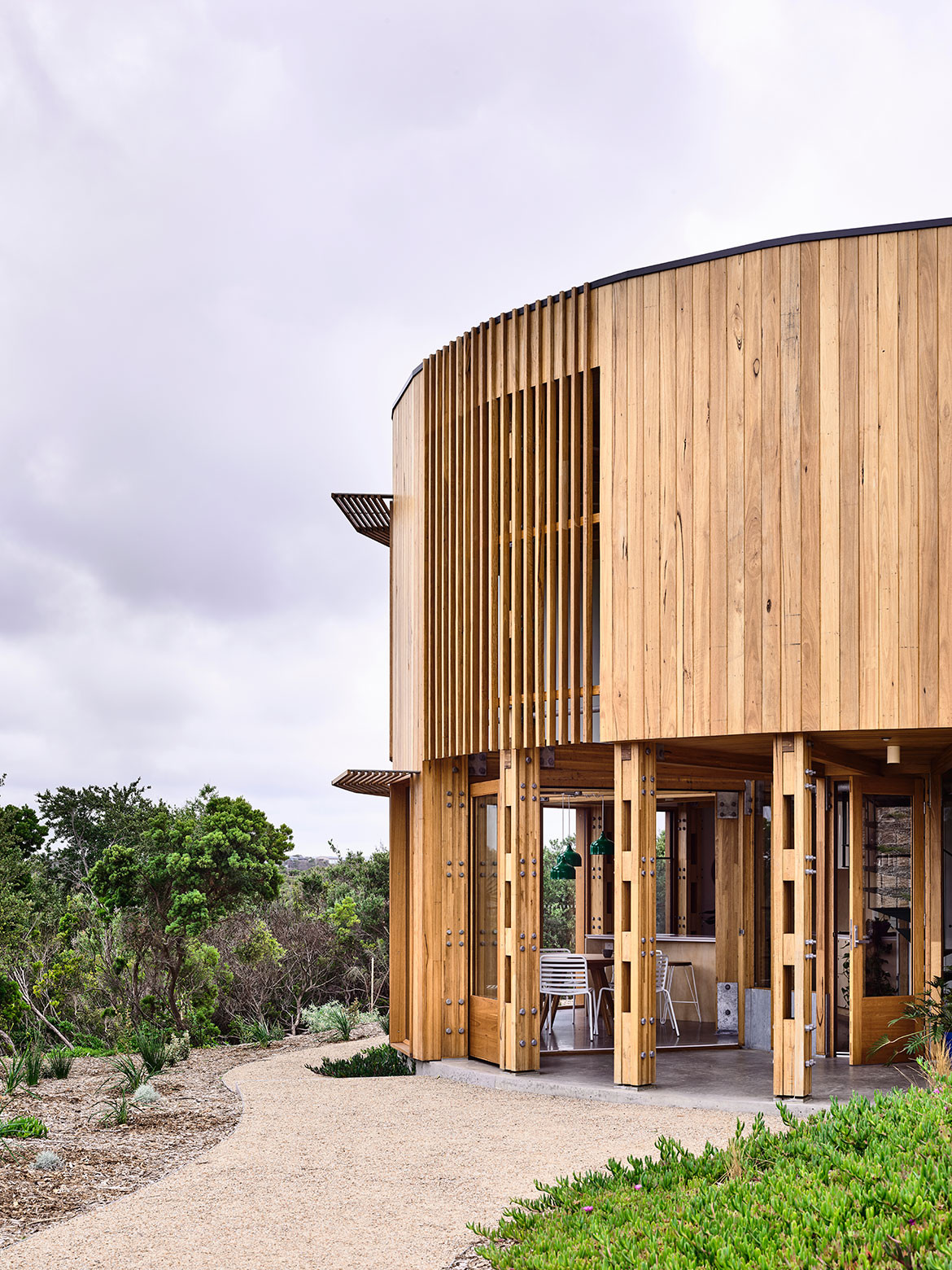 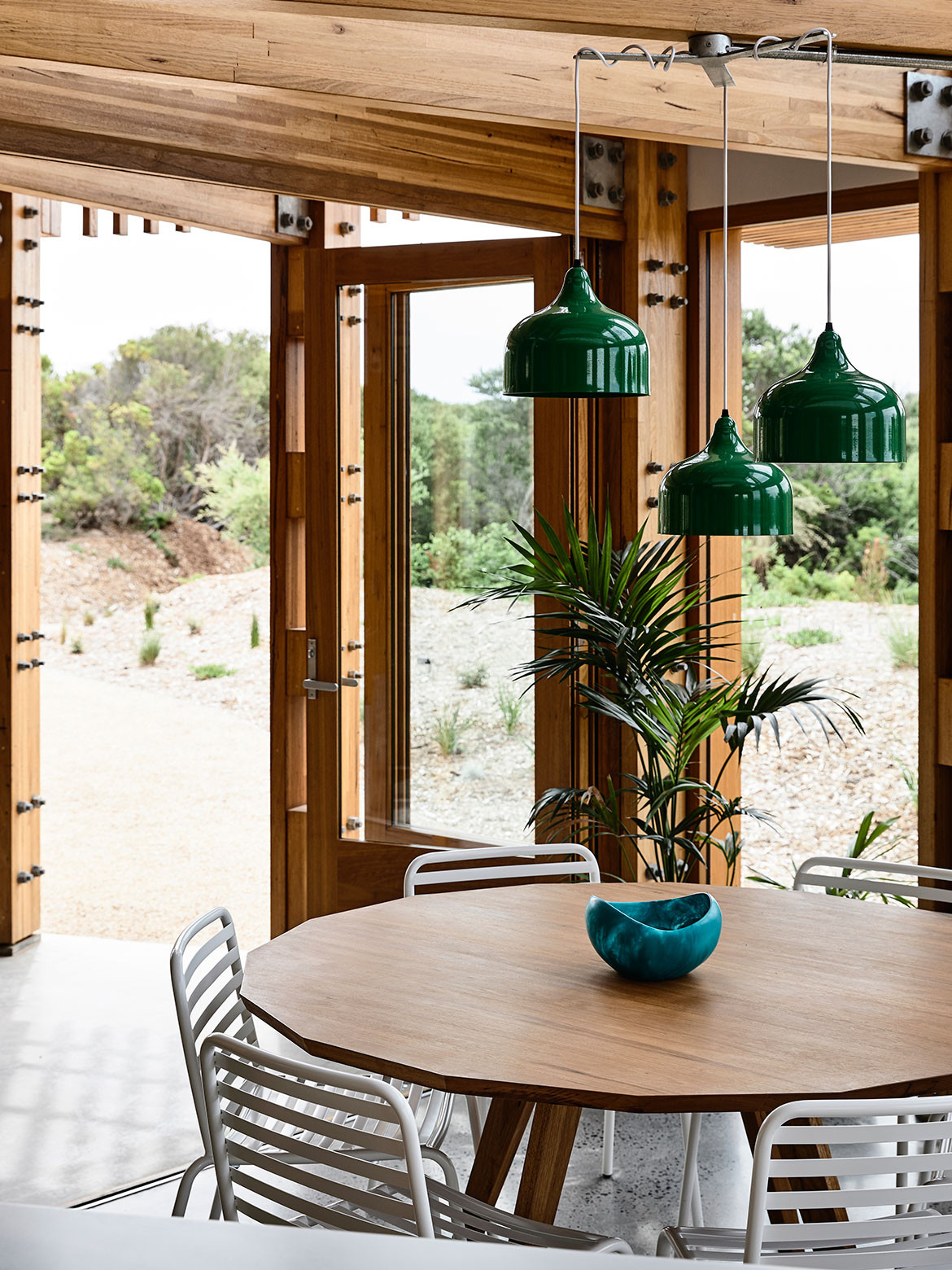 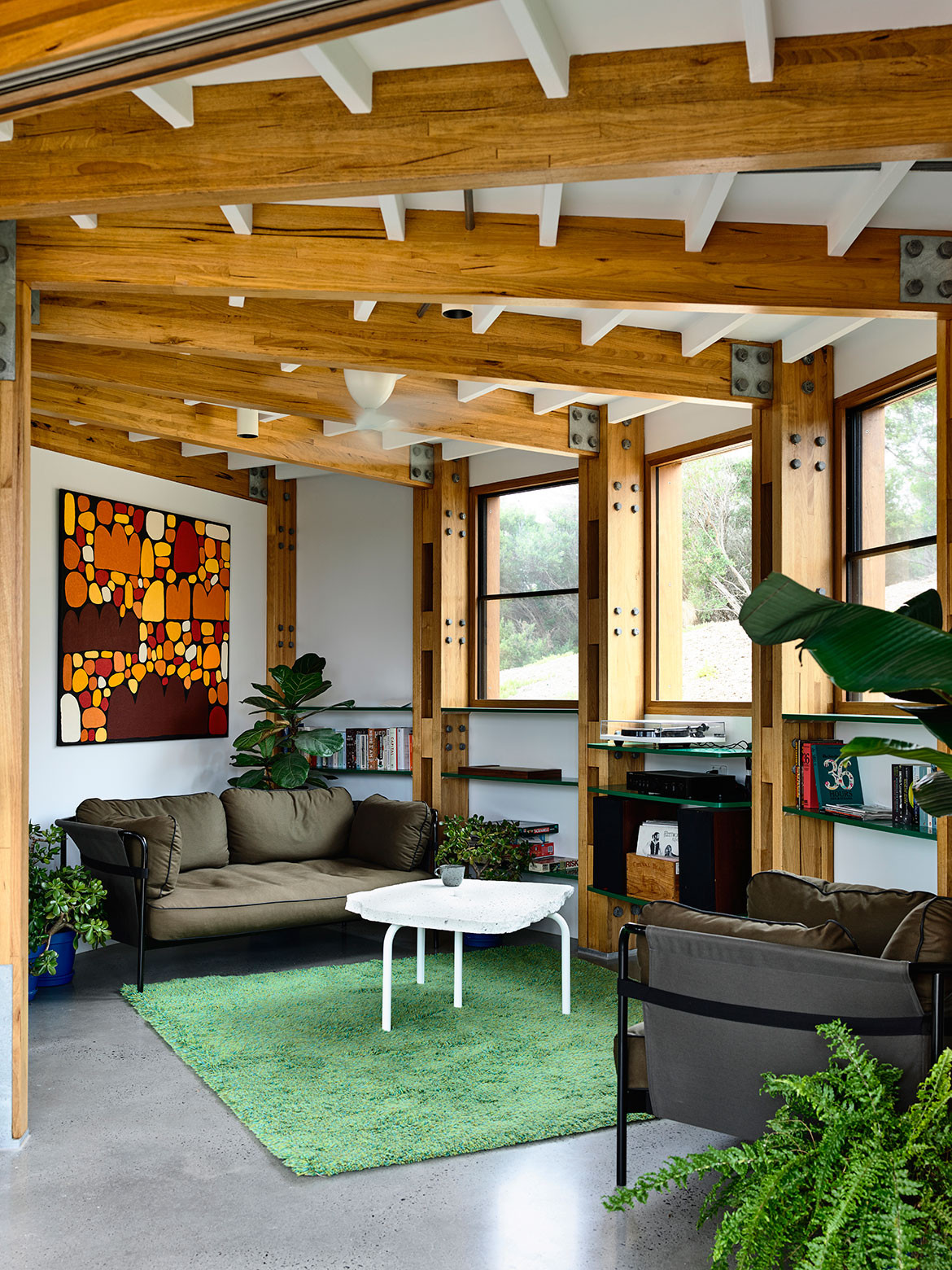 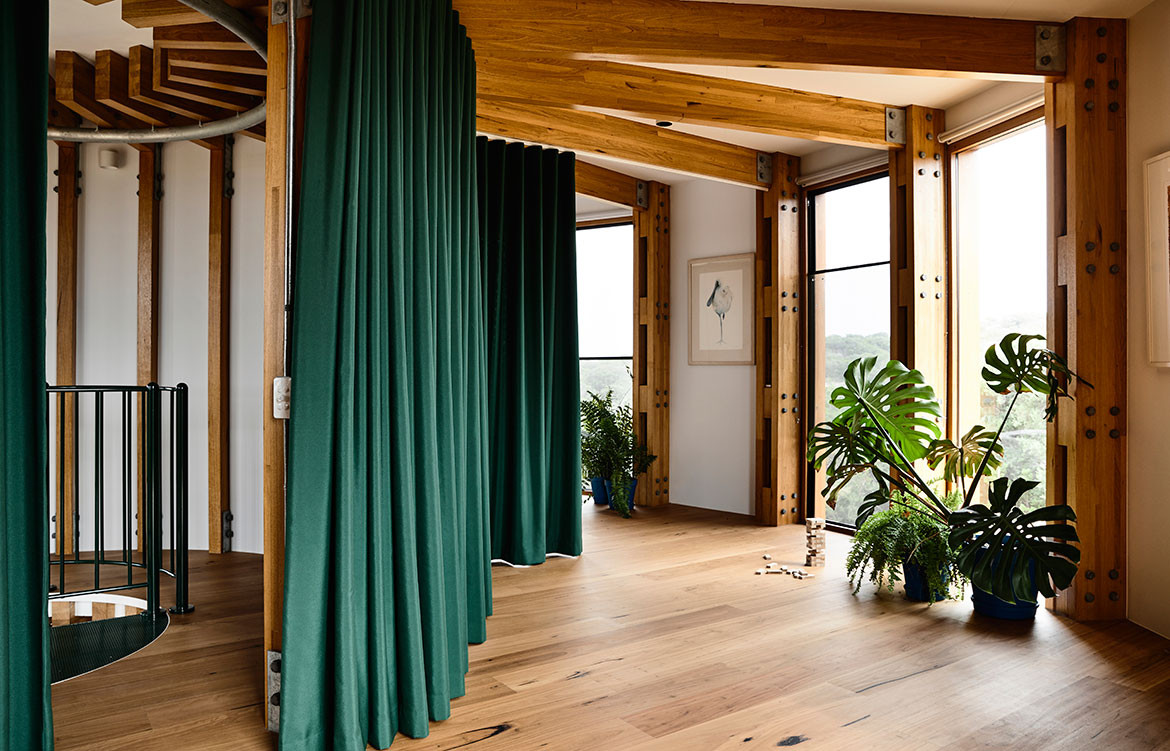 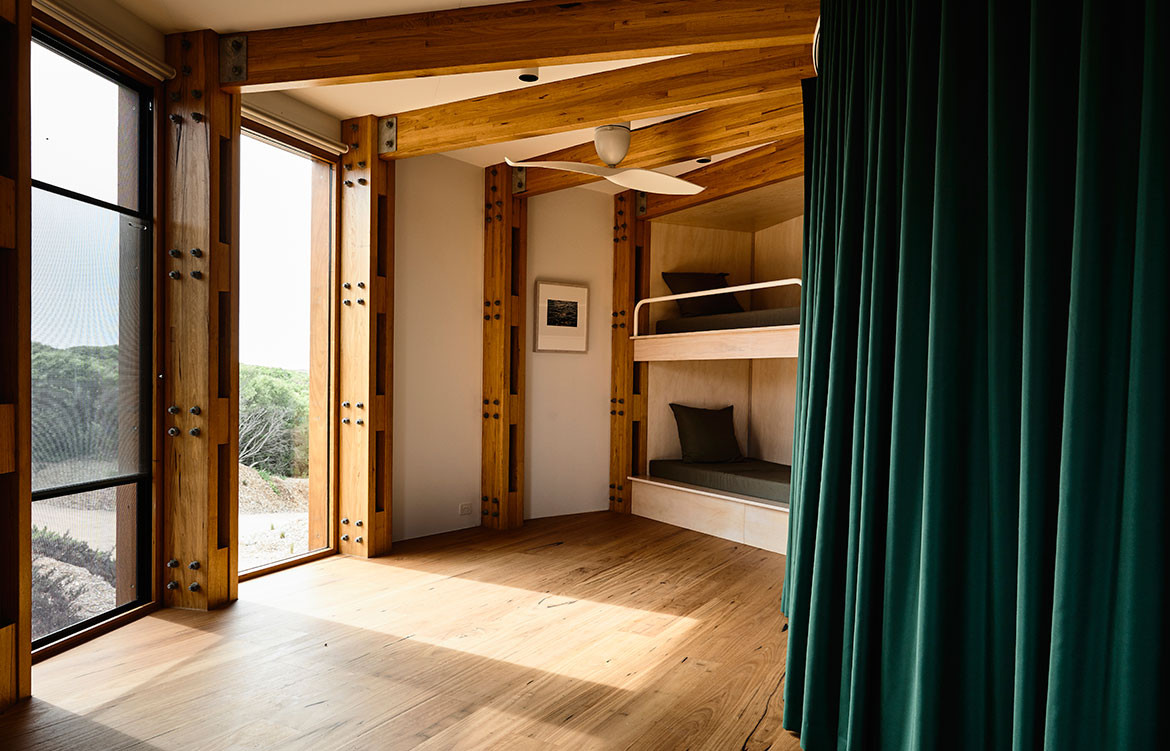 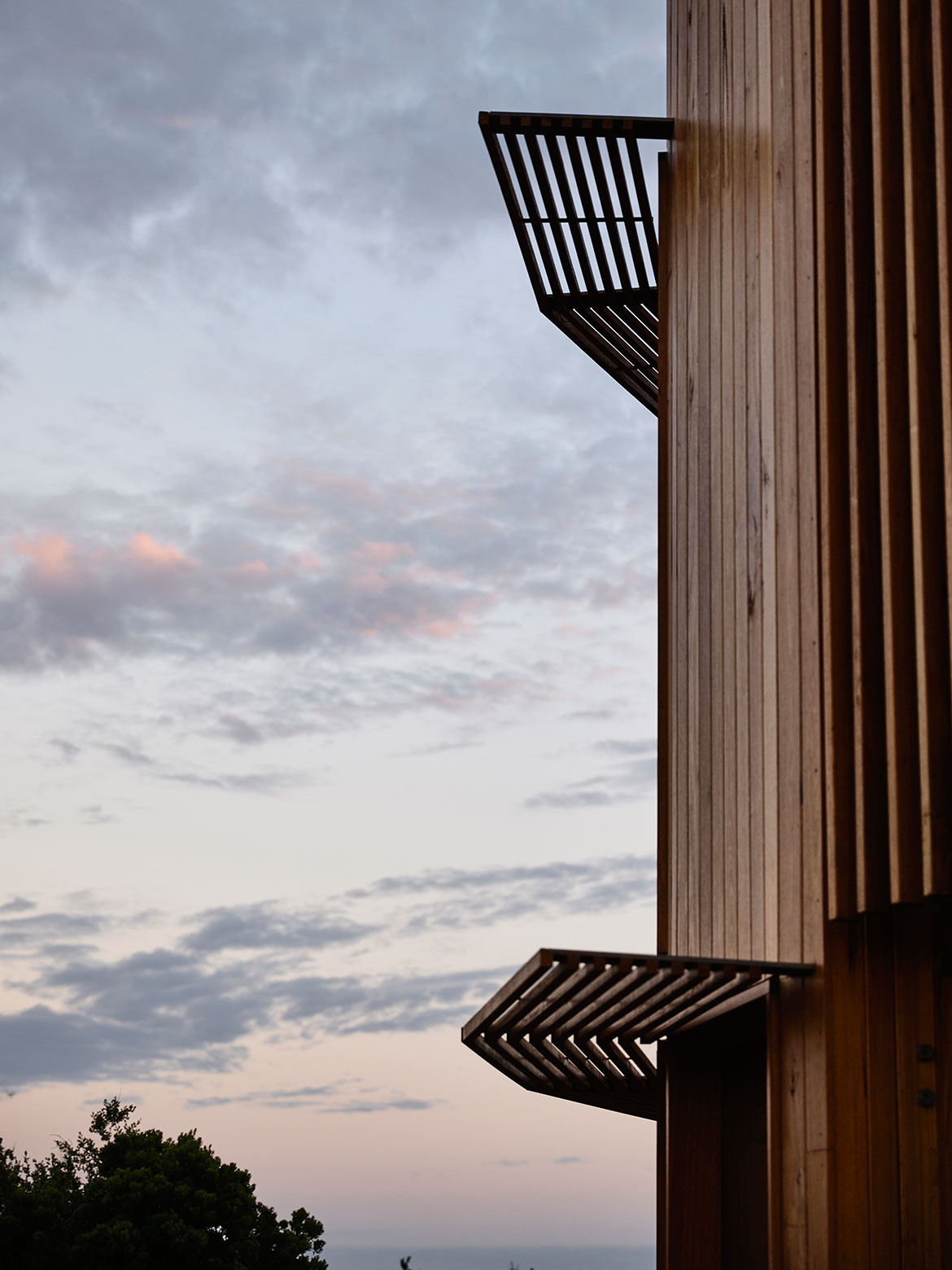 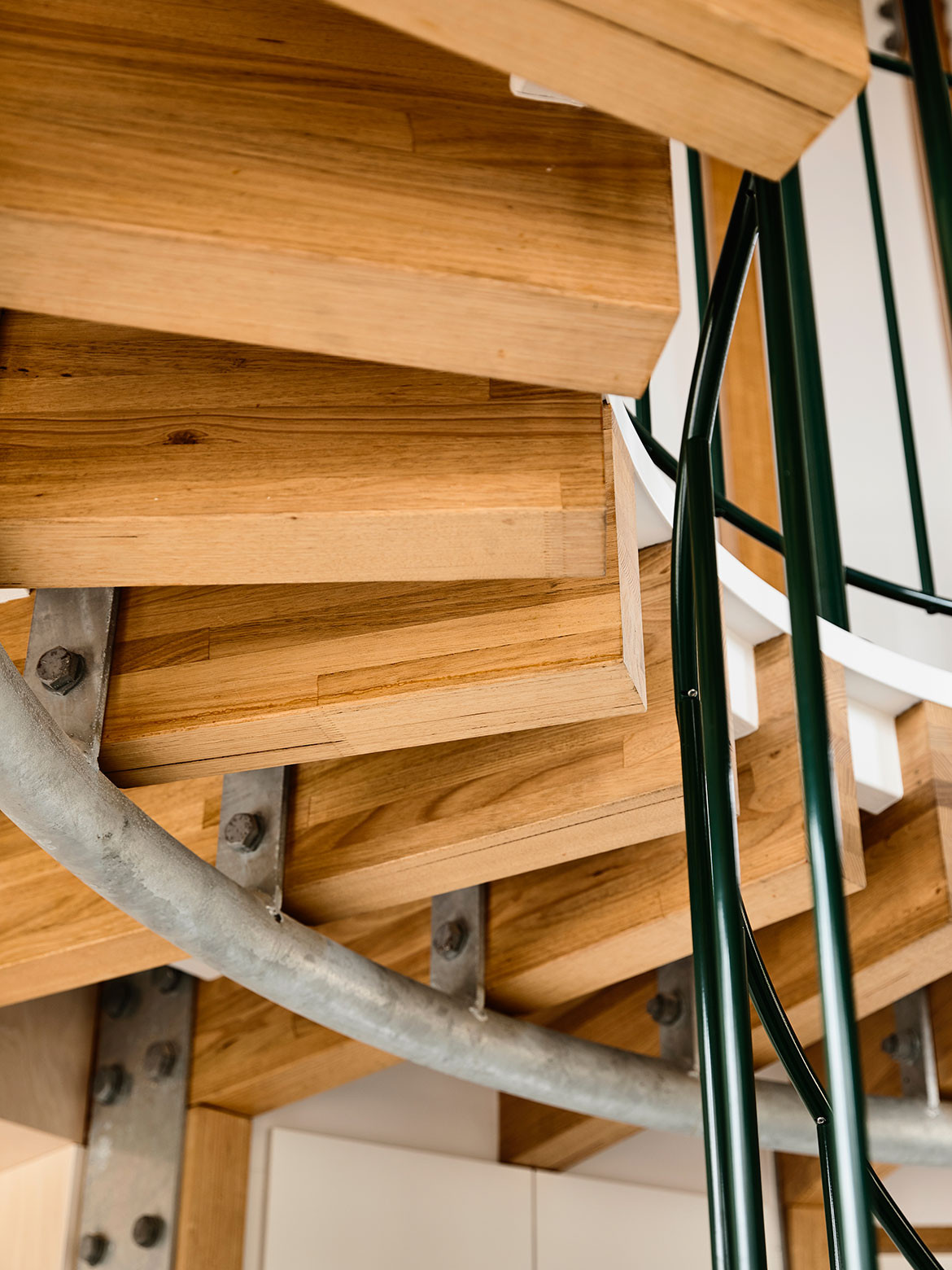 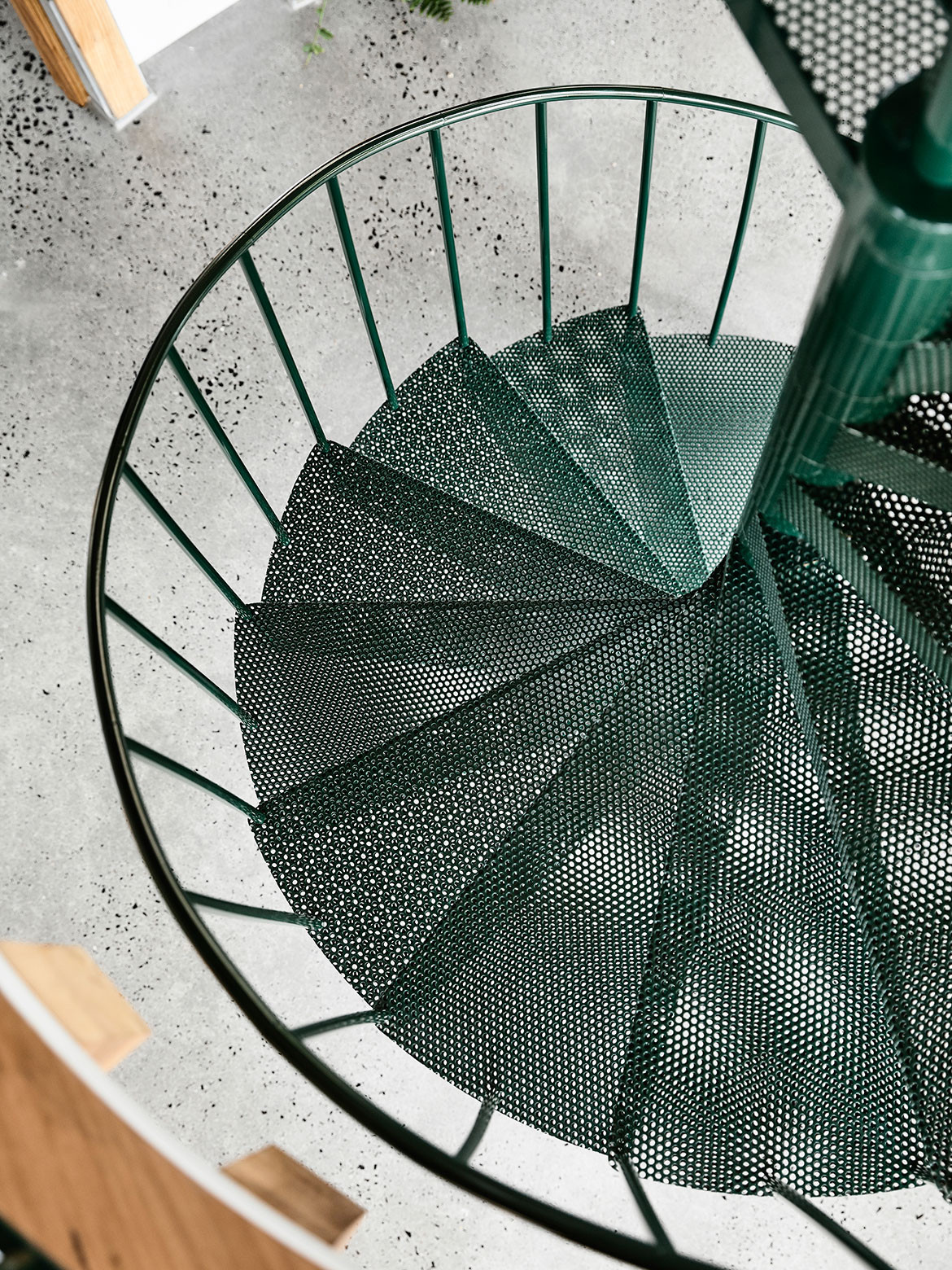 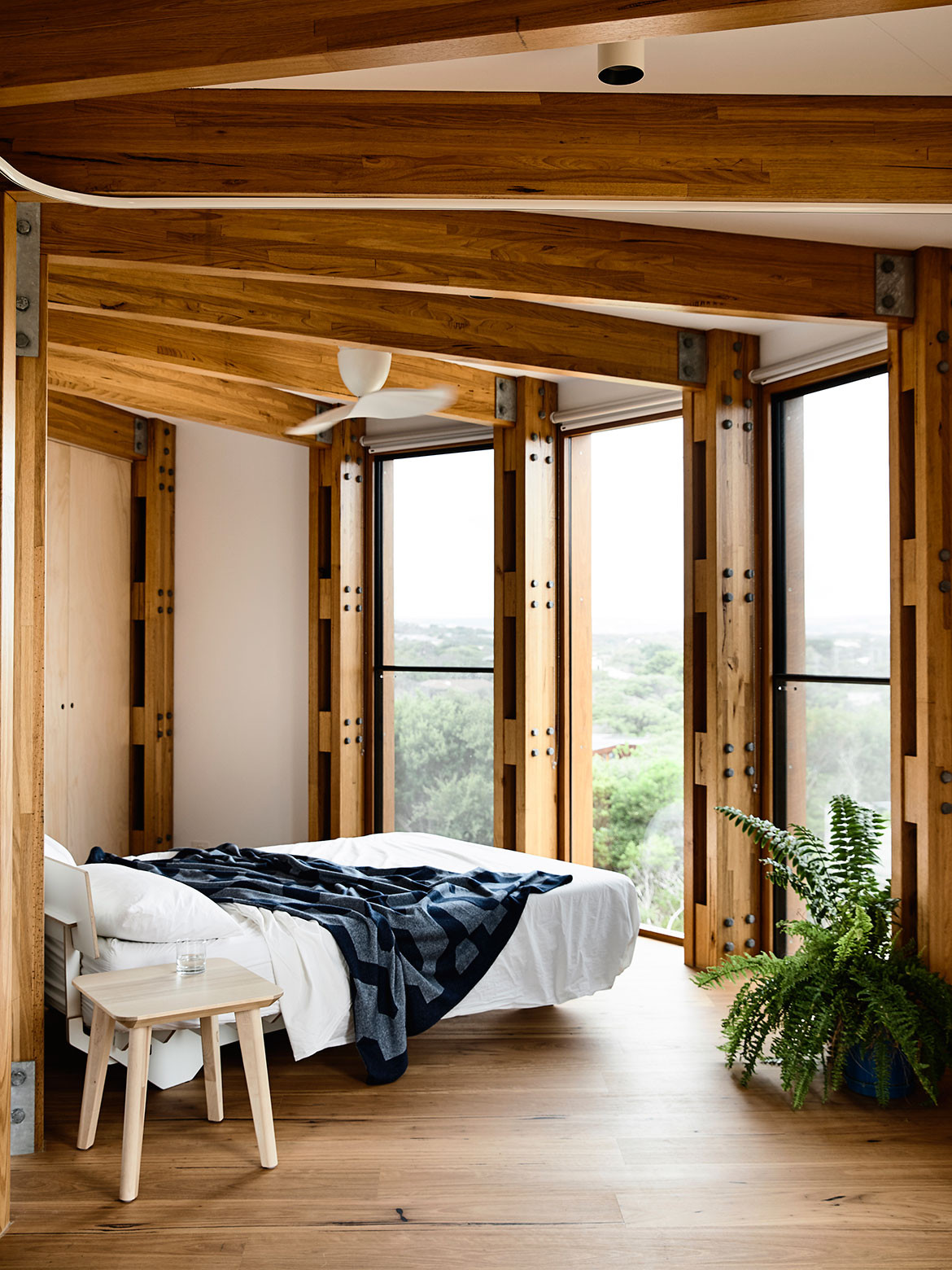 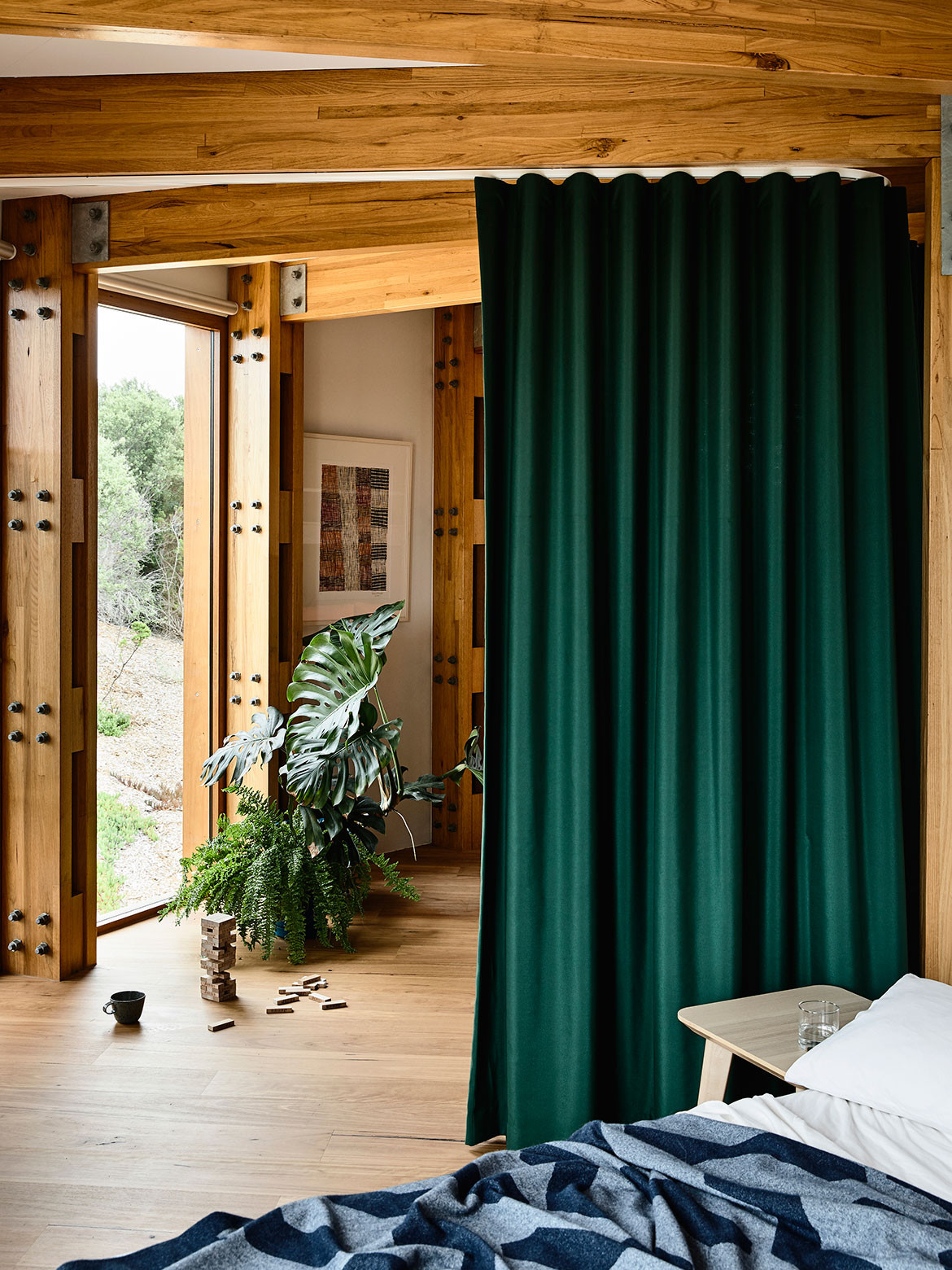 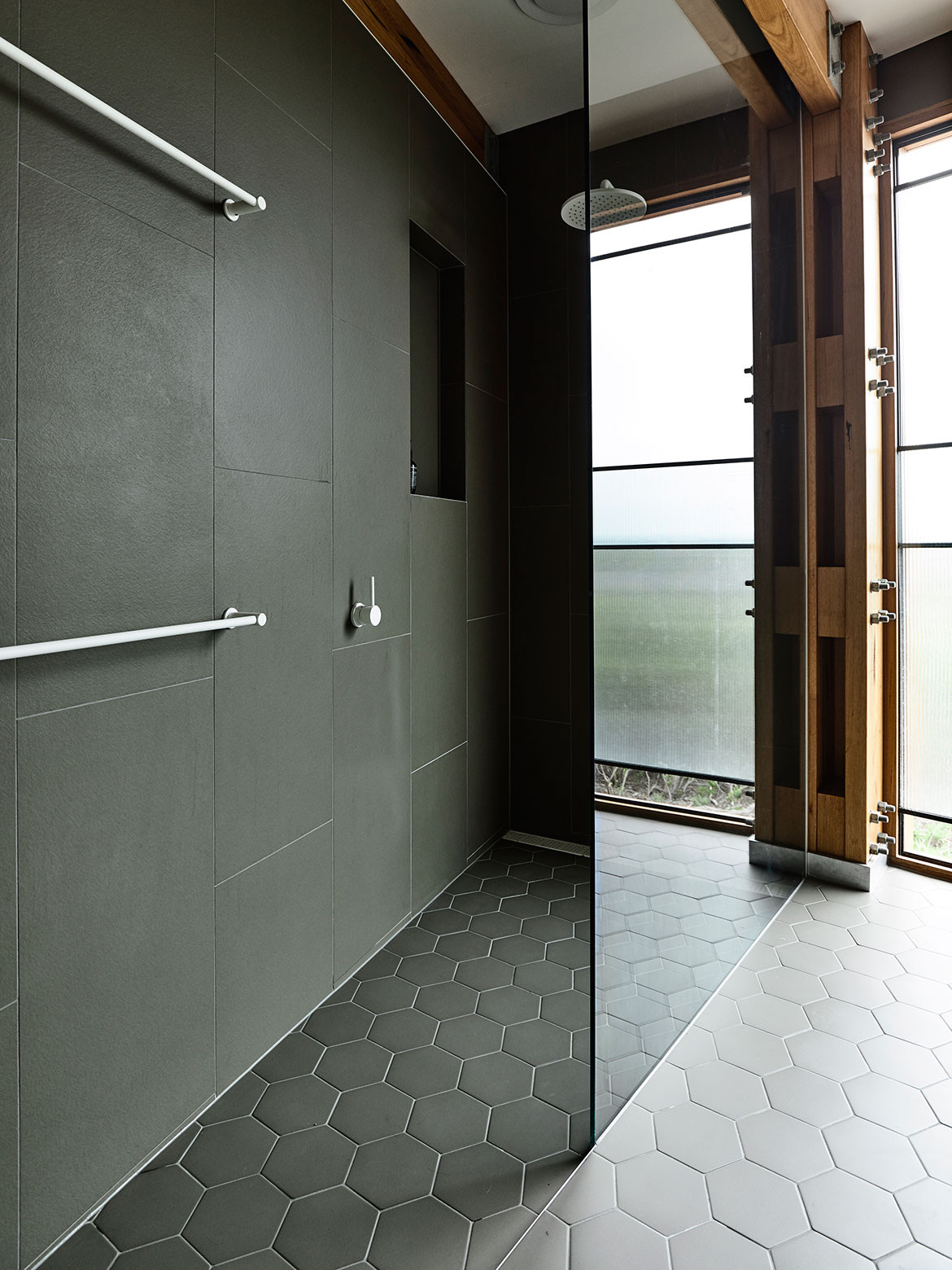 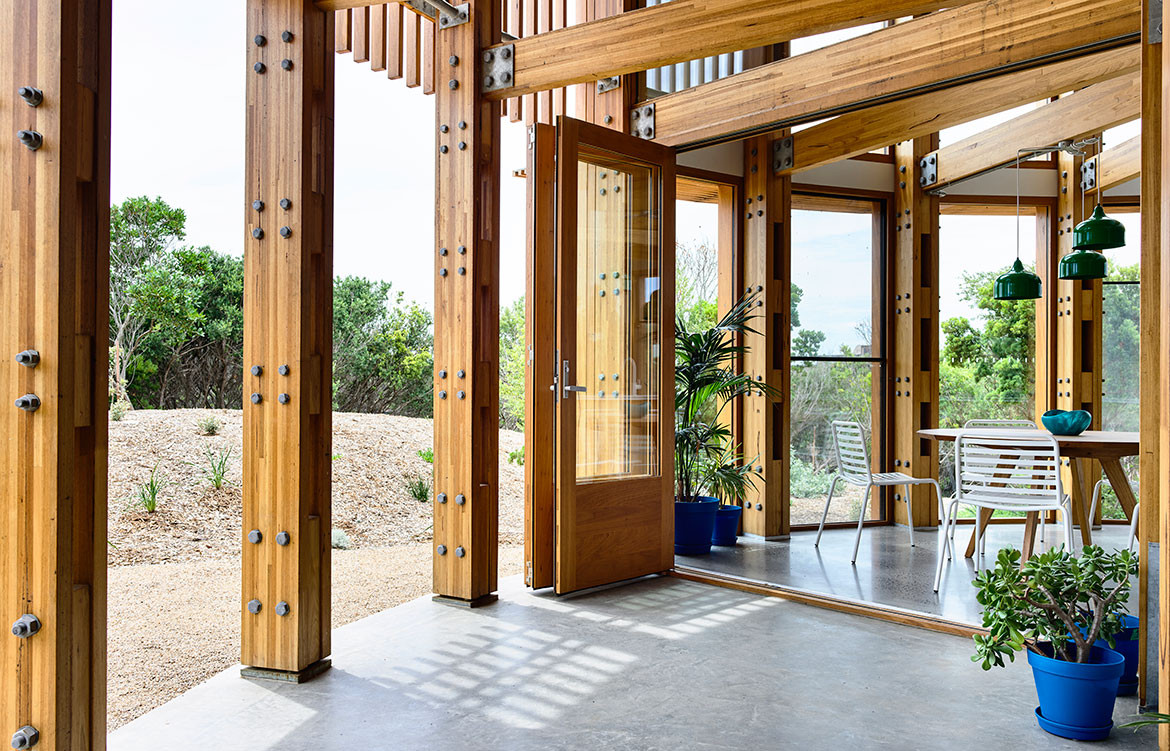 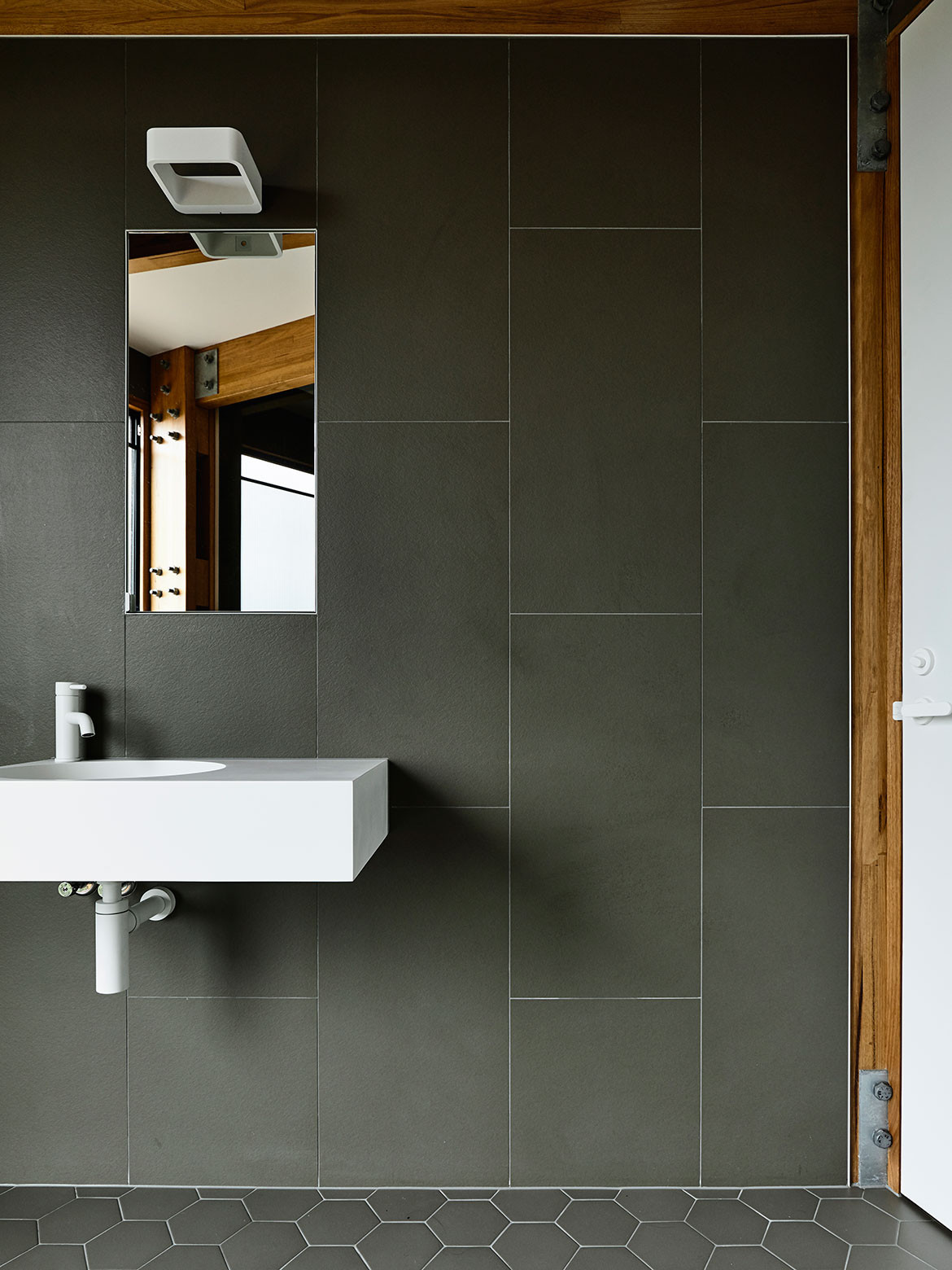 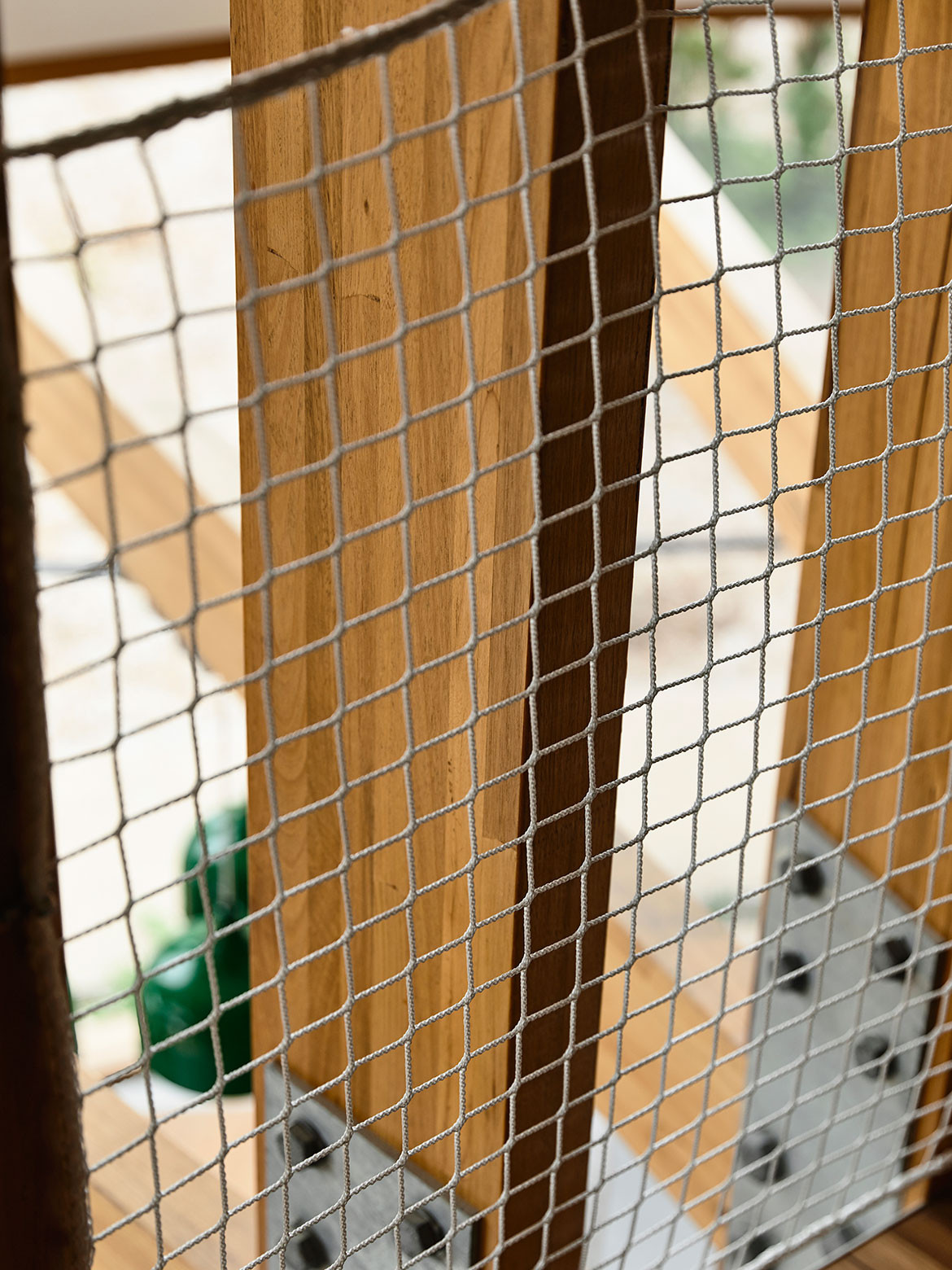 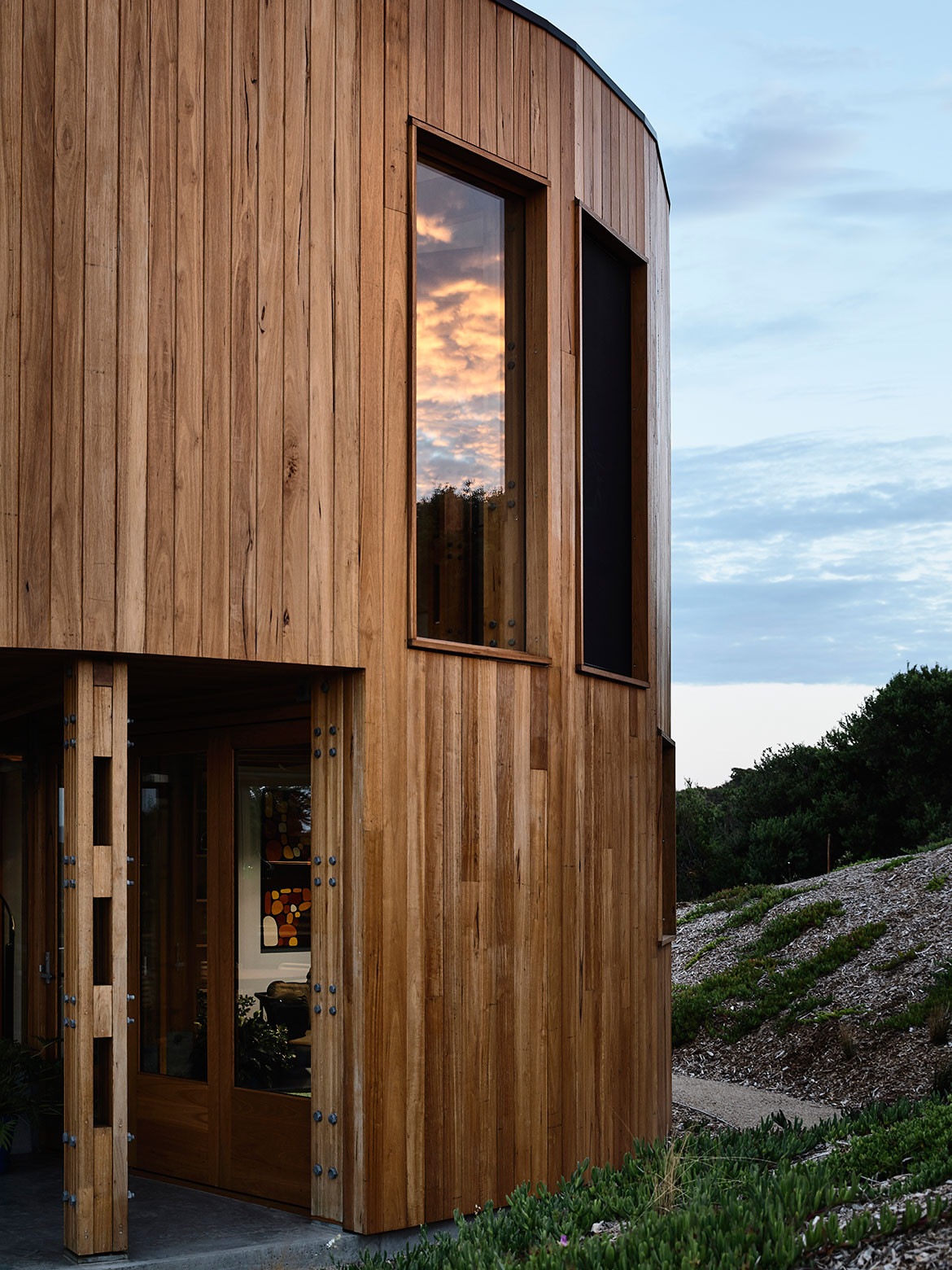 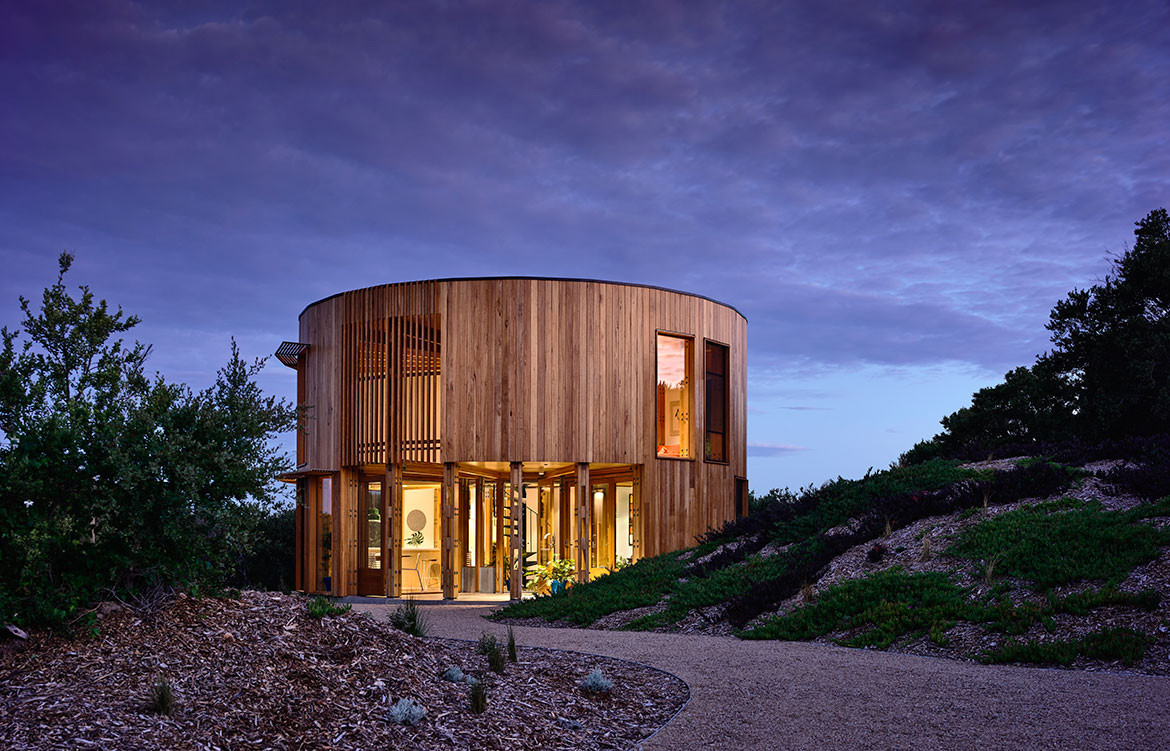 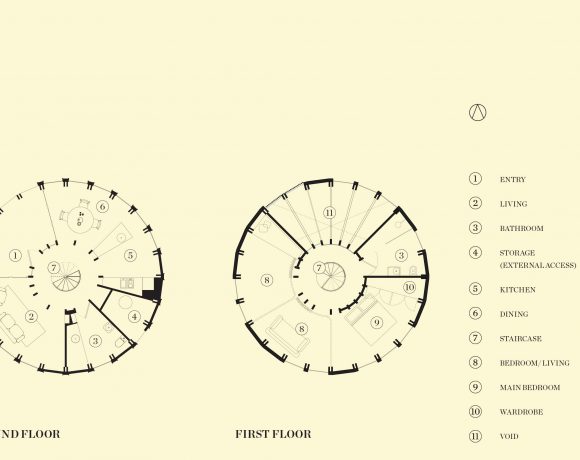