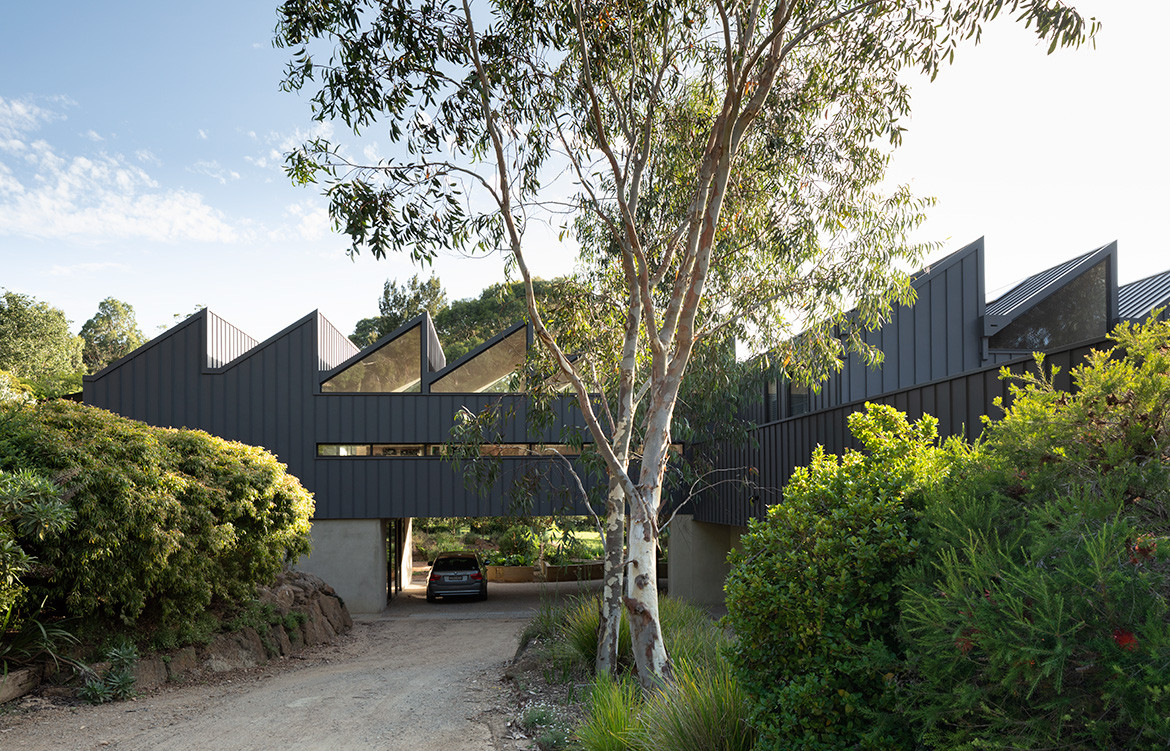 Appearing as a new dwelling, the CLT house by FMD Architects includes the reworking of a 1970s brown brick dwelling, driven by the use of cross-laminated timber and the rural typology.

Designed for a couple with adult children and grandchildren, this house, located on Victoria’s Mornington Peninsula, is known as CLT, short for cross-laminated timber. “It was this material that drove the design; a material that could be fully expressed throughout the home, revealing its structure,” says architect Fiona Dunin, director of FMD Architects.

Fiona and her team were given a simple single-storey 1970s brown brick house on a sprawling 8-hectare site that operates as a working farm. “Peter and Sue are working towards retirement (from their building business) and are now spending more time during their week down here. The children and grandchildren are also here regularly on weekends and holidays,” says Fiona, explaining the need for a considerably larger home. “Peter also needed a place where he could work from,” she adds. 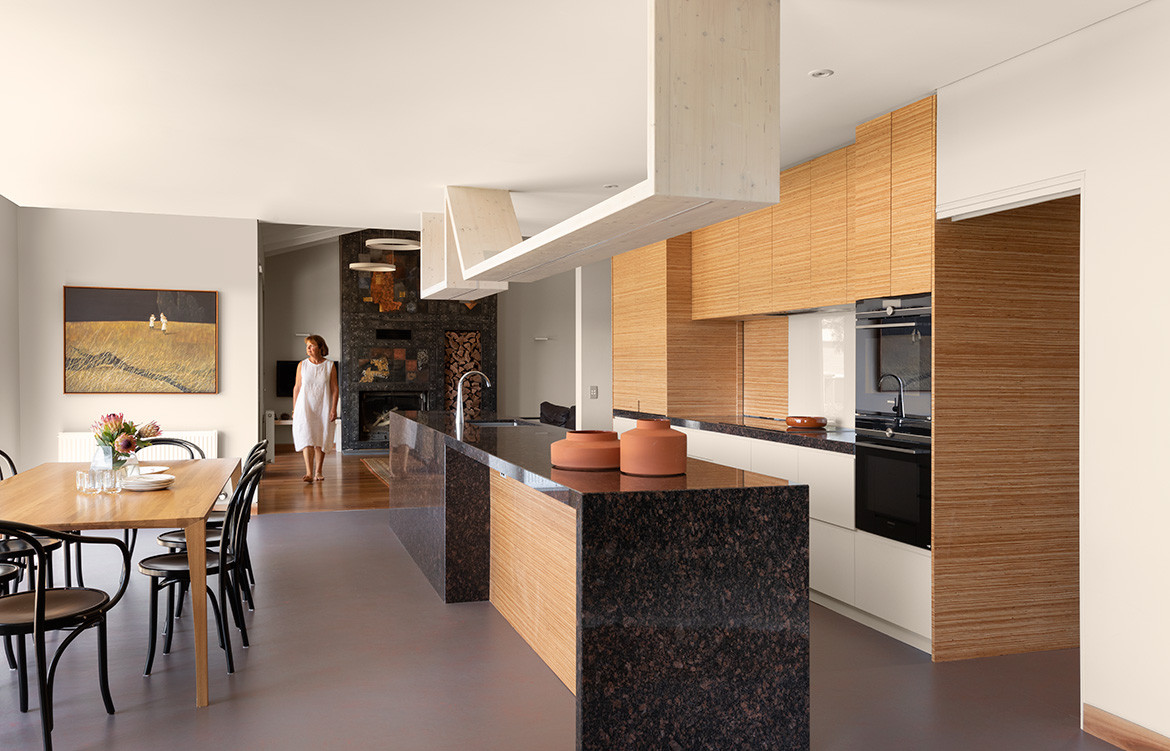 With a fall across the site of approximately four metres, one of the main issues was not only space but also, importantly, a connection to the northern garden, predominantly unused. So the brown bricks of the original house were rendered and a first floor addition, with a sawtooth-style roof, was created. “I wanted to pick up on the surrounding farm sheds as well as bringing the appropriate even-quality light into the studio (on the first floor, along with the main bedroom at one end and a guest bedroom at the other).”

The ground floor, dissected by the covered carport, features a complete reworking of the original home on one side and a completely new bunkroom on the other. “The idea was to create the feel of an entirely new house rather than something that’s been added to,” says Fiona. The children and grandchildren are now fortunate enough to have their own accommodation, including five bedrooms and two living areas. The kitchen and dining area on the ground floor brings the entire family together. 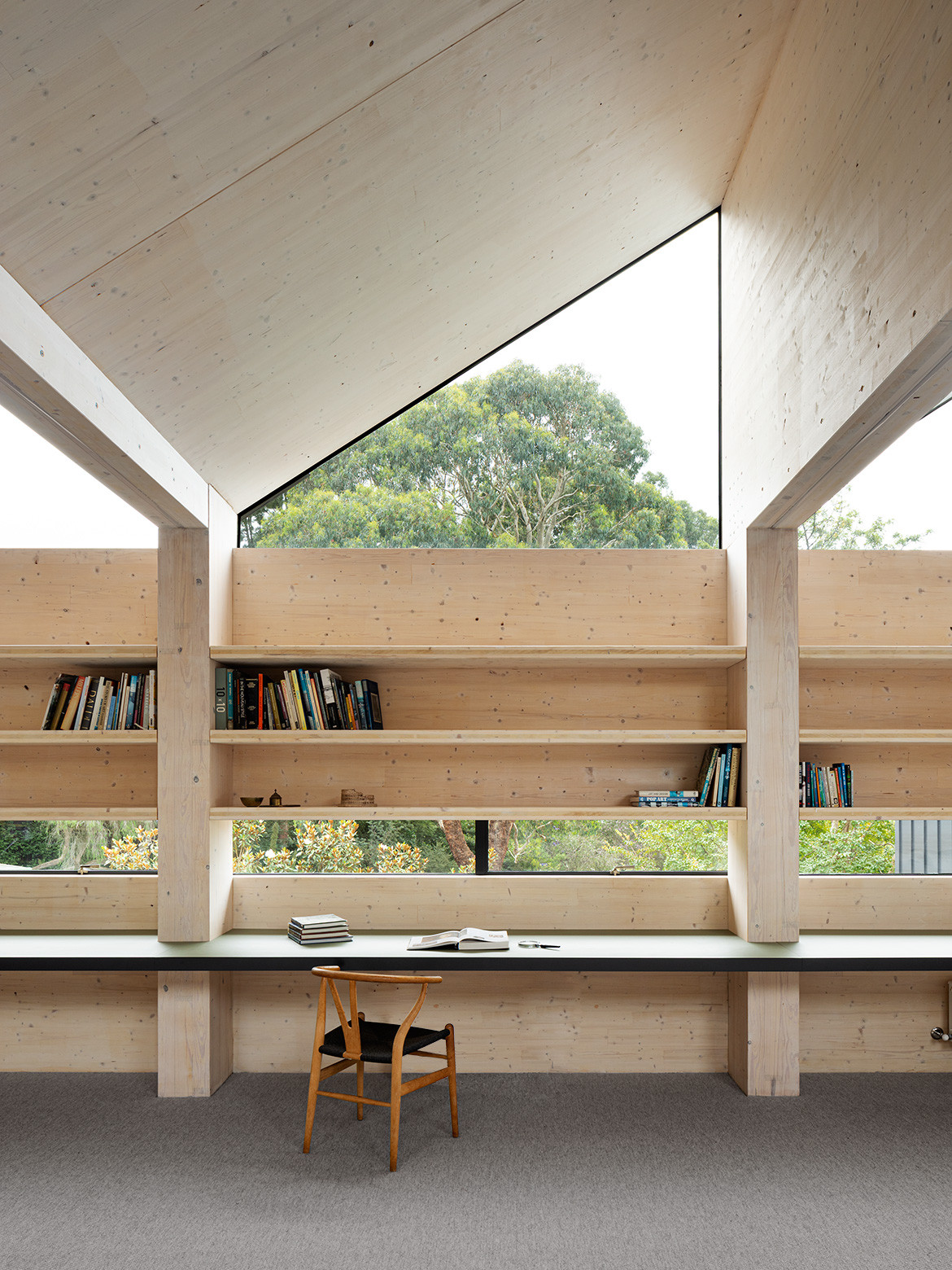 With an emphasis on functionality and practicality, the materials used by FMD Architects include cross-laminated beams expressed in structural elements, as well as in the form of a light fitting above the kitchen island bench – made from CLT but limed. The profile of this light also evokes the outline of the home’s sawtooth roof. “Sue and Peter didn’t want any superfluous details. But the CLT was also in the plan, given its ability to support considerable expanses, up to 14 metres in this case,” says Fiona, who was keen to create a certain rhythm in the design, as well as being able to frame the majestic gum trees on the property. The use of charcoal steel on the exterior picks up on the tree trunks as well as further echoing the industrial/farm aesthetic. At night, the house becomes even more animated when the interior lights create a more exaggerated profile in the bush setting.

What was a simple 70s house has become a substantial home for a large extended family. There are now not only sufficient bedrooms, but a variety of living and outdoor areas to choose from, including outdoor decks on the first floor that offer impressive views over Western Port Bay.

“The spaces are loosely conceived to cater for parents on the top level and the rest of the family below, but some areas are obviously shared,” says Fiona, who created a separate library/office for Peter on the top floor, as well as a large trestle-style table in the main workspace where grandchildren can spread out with their butcher’s paper and crayons. “It’s a place to be used and enjoyed, and designed to be extremely functional.” 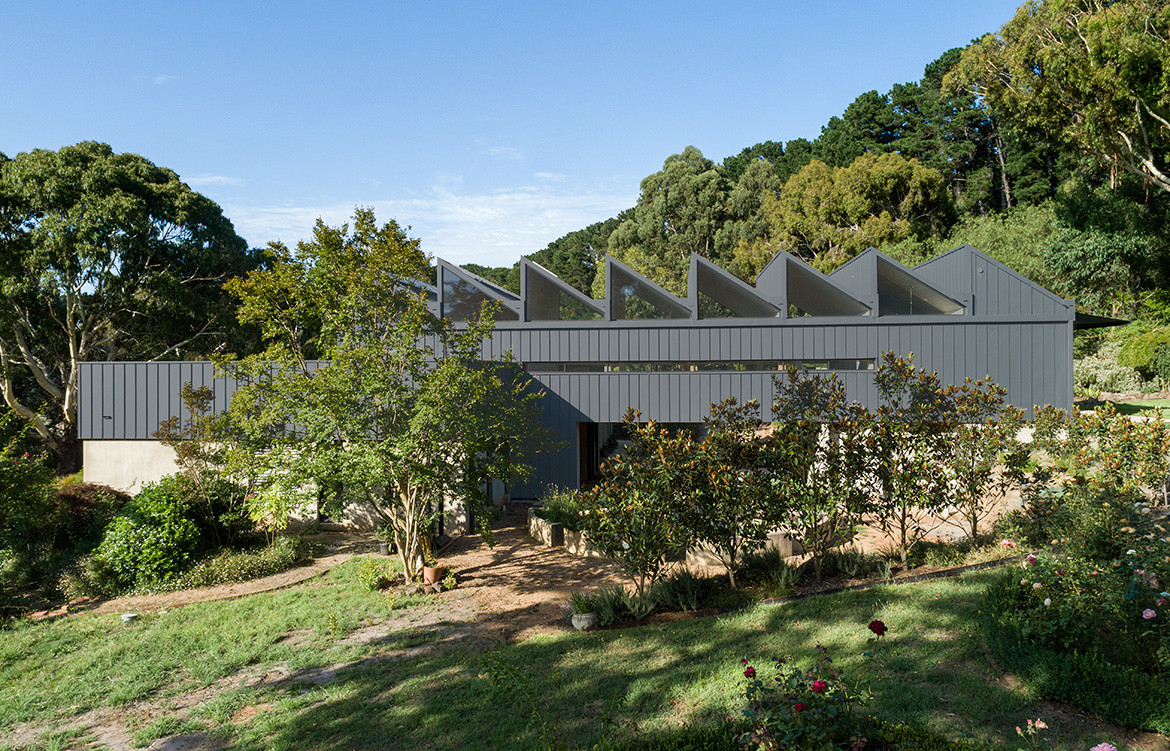 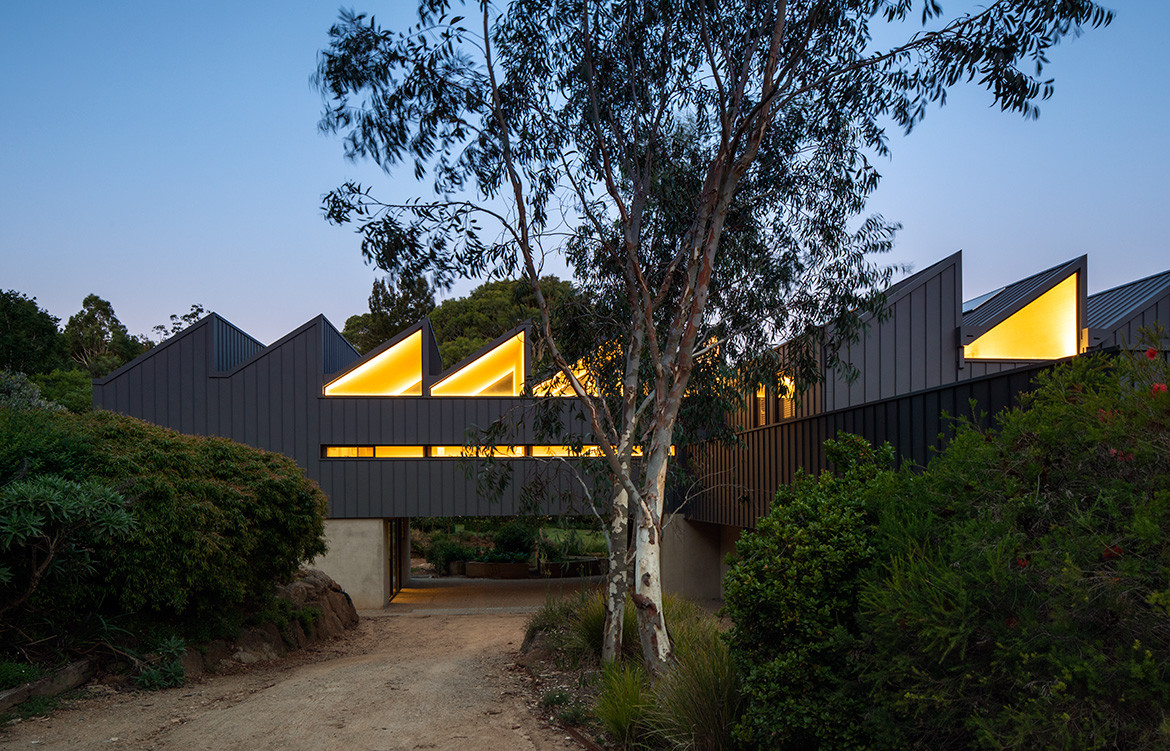 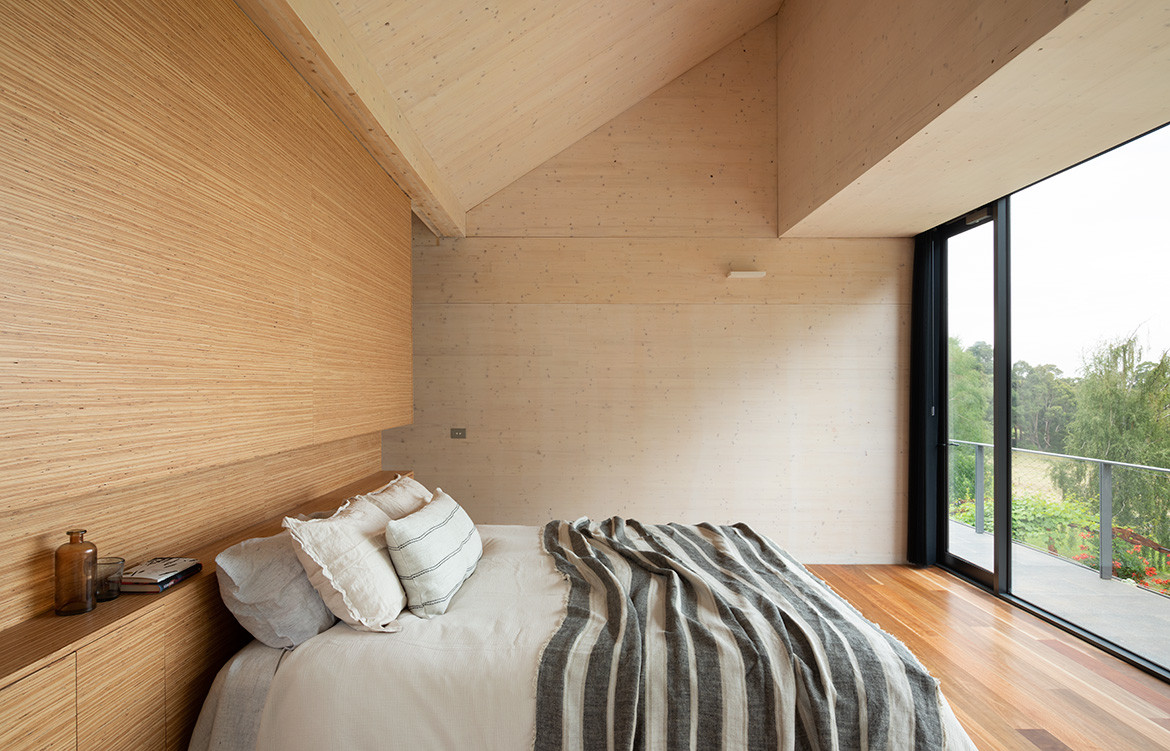 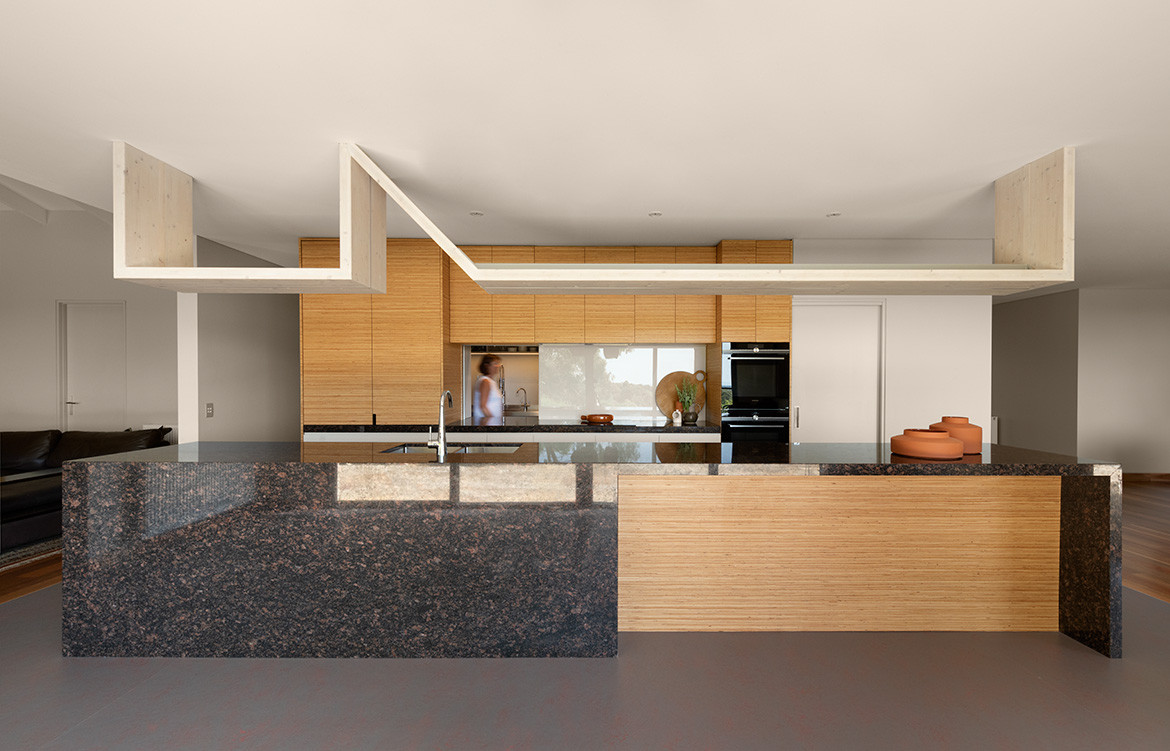 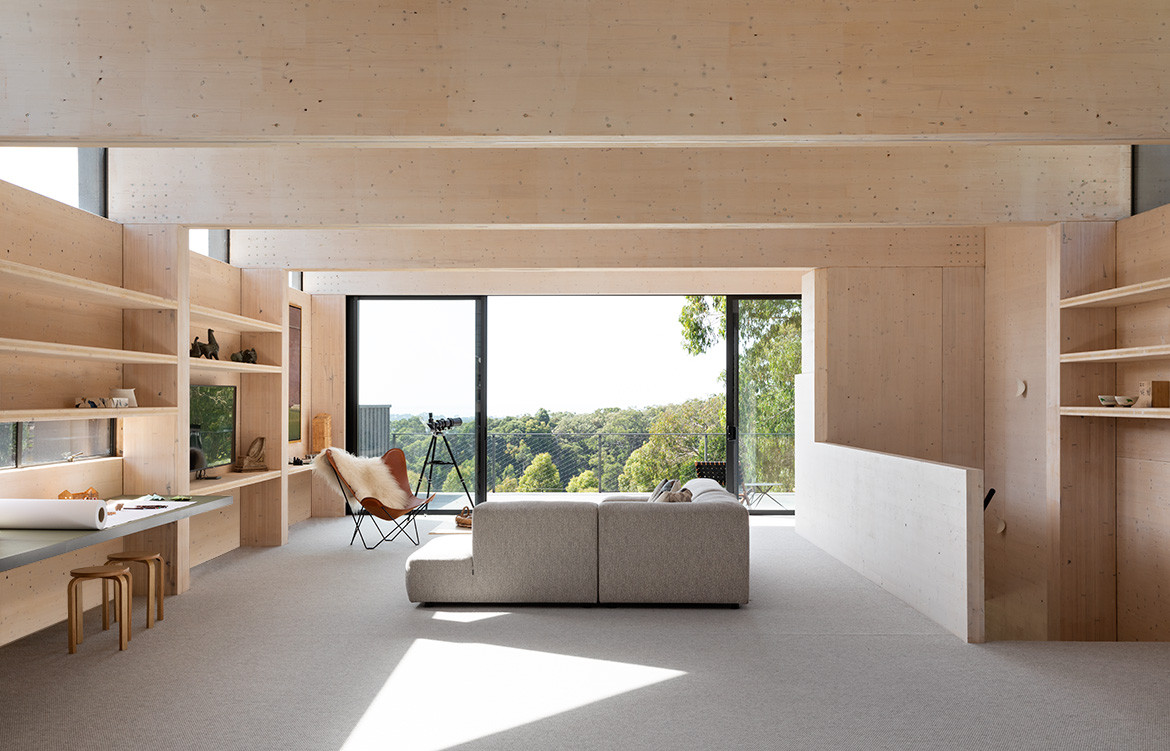 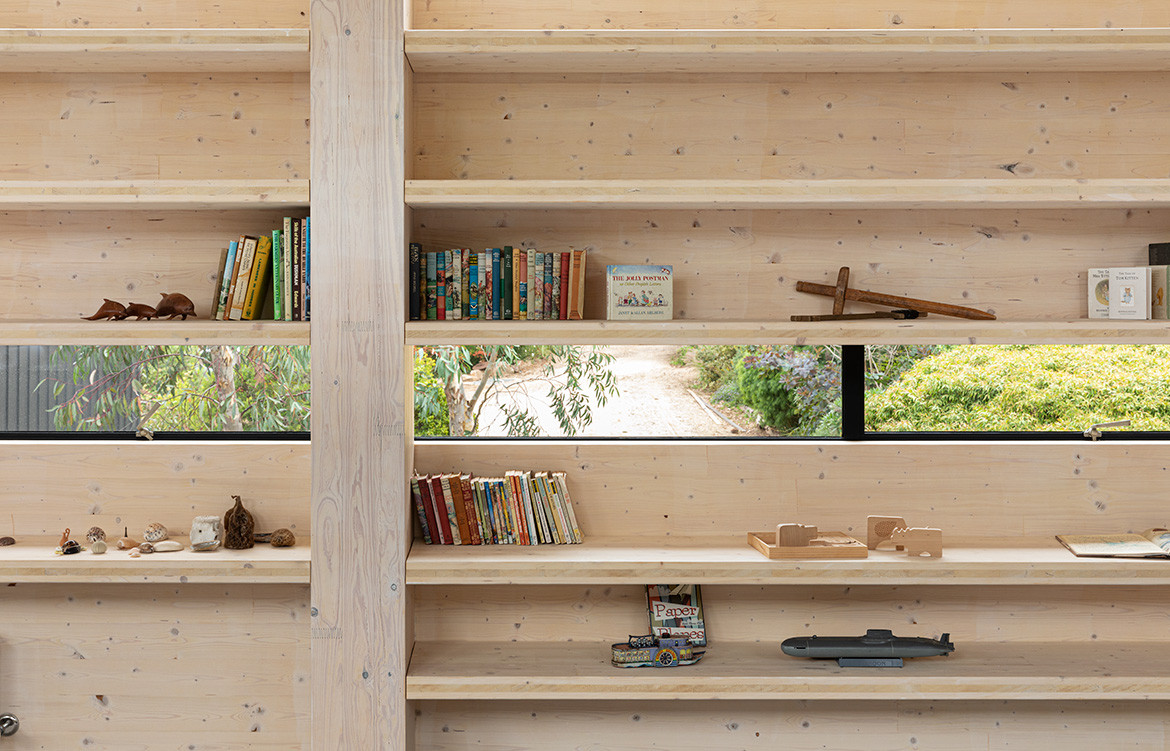 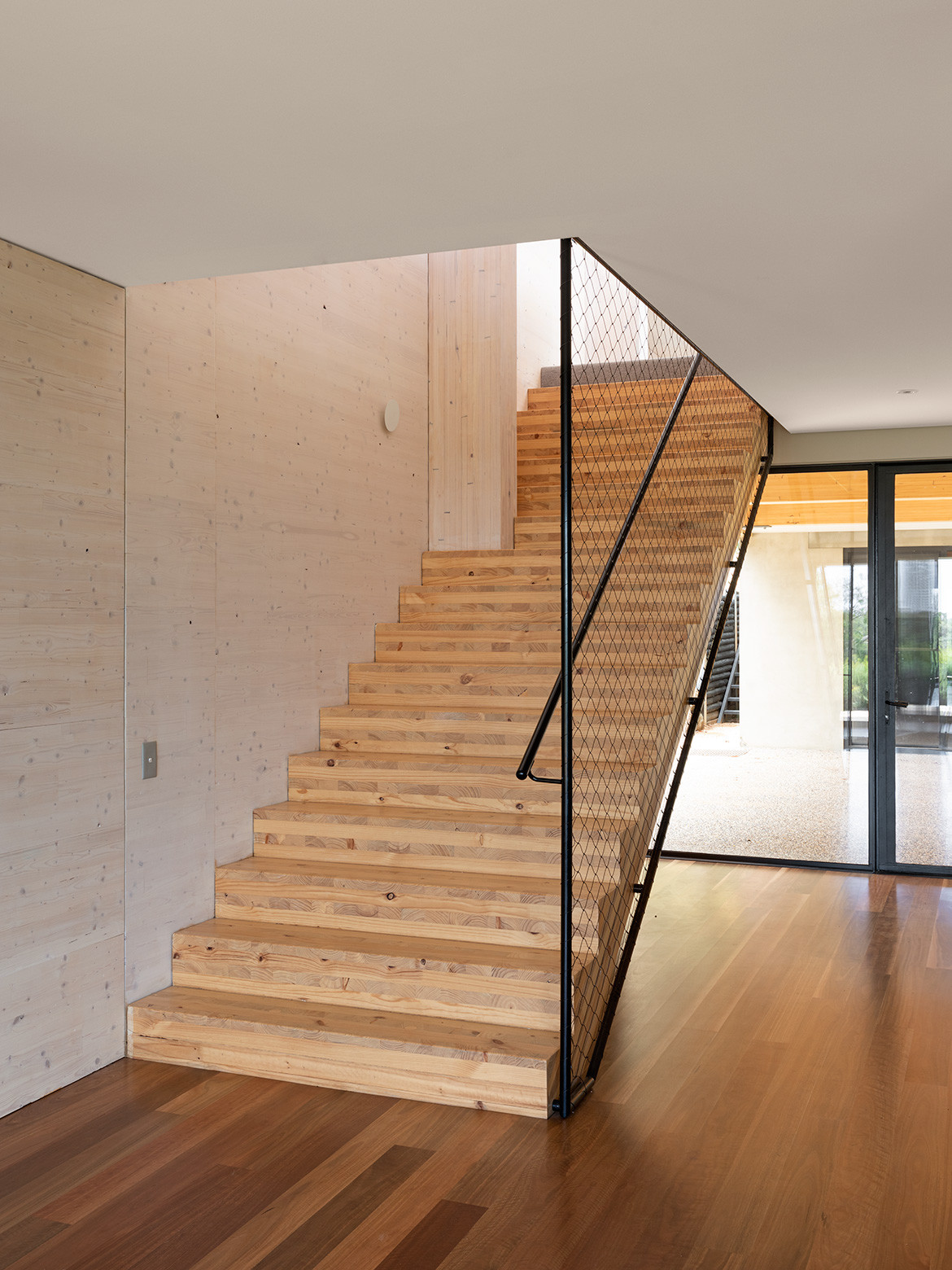 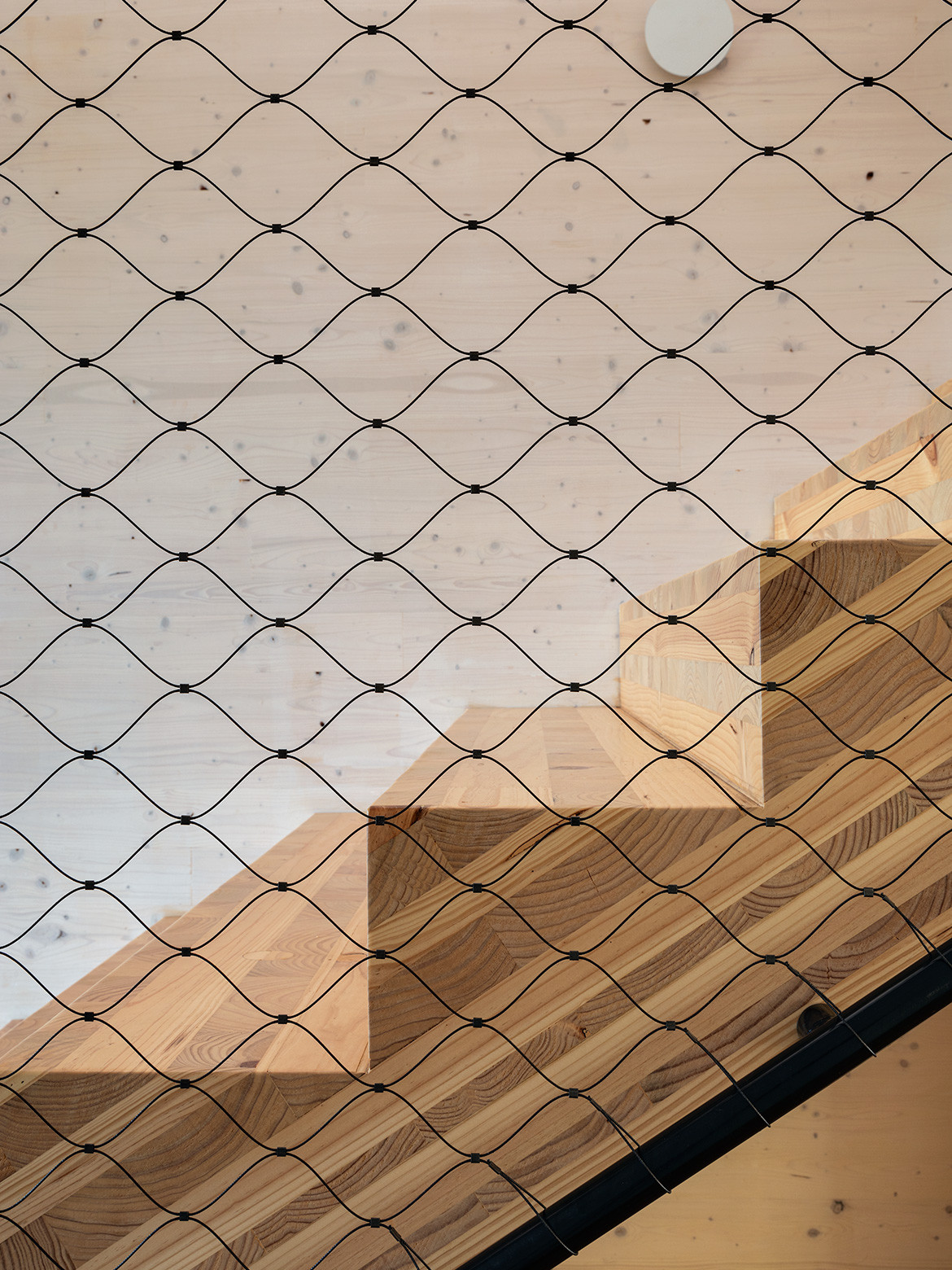 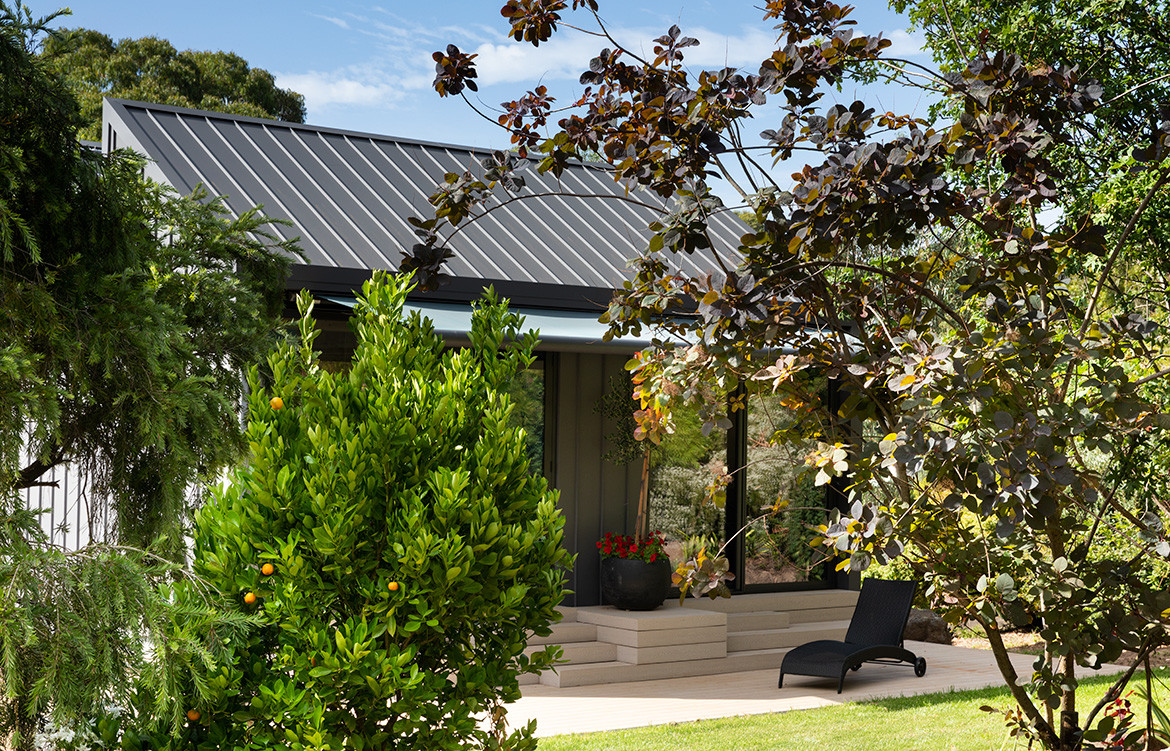 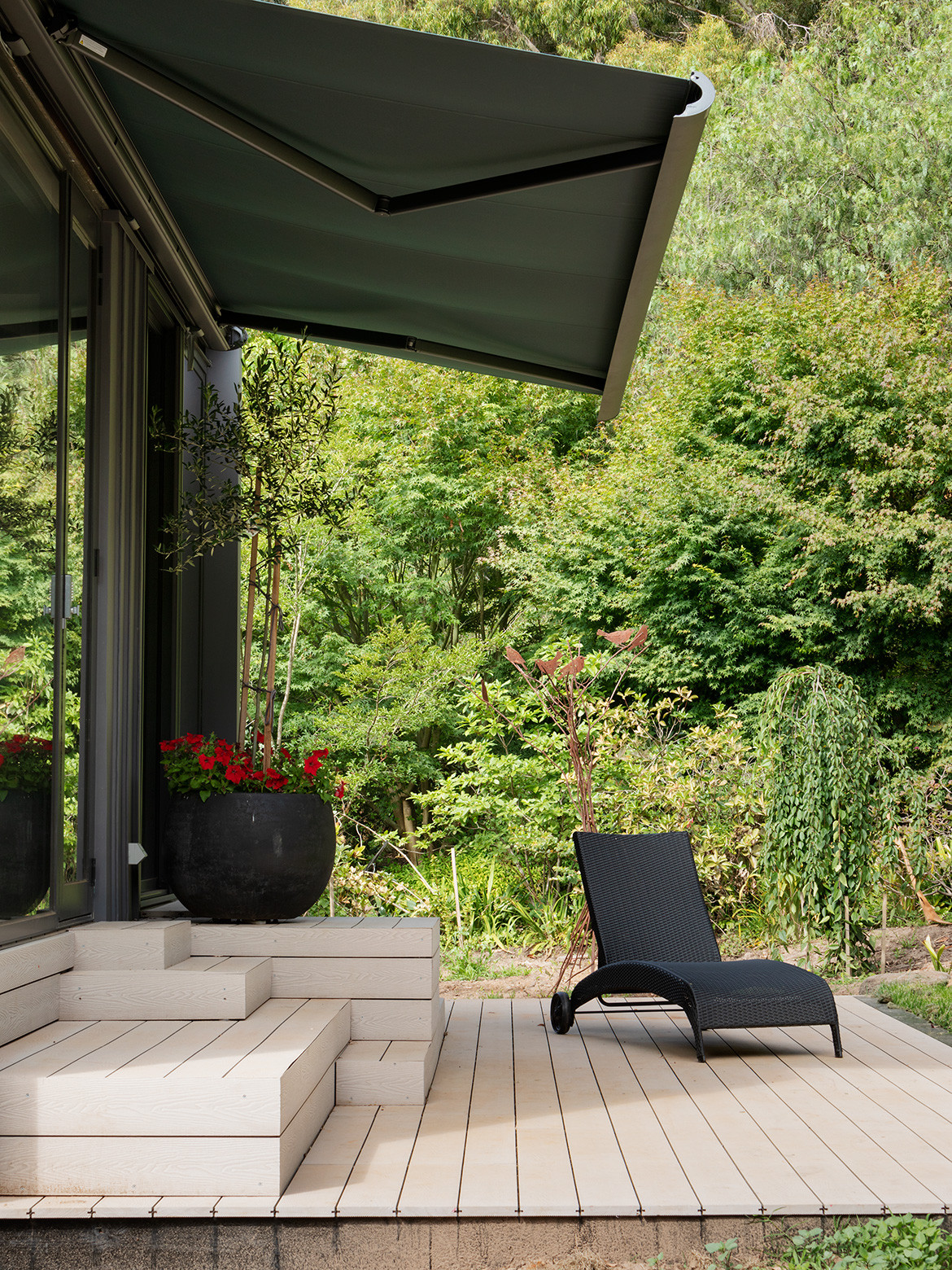 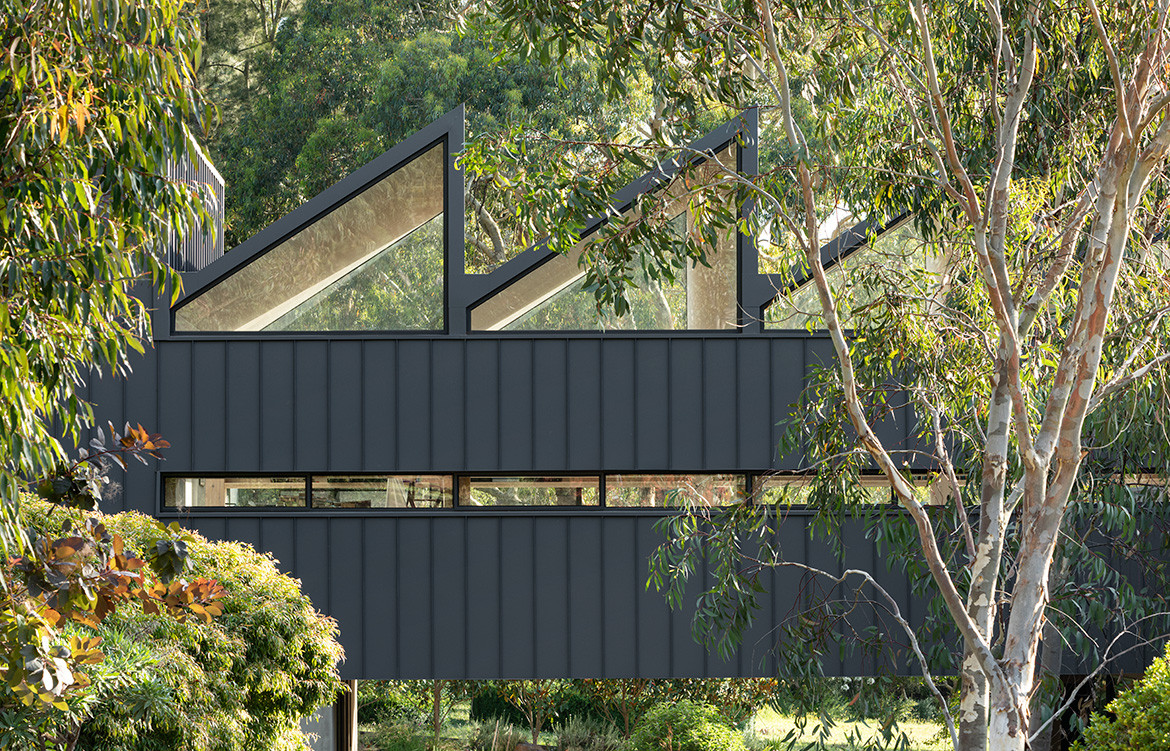 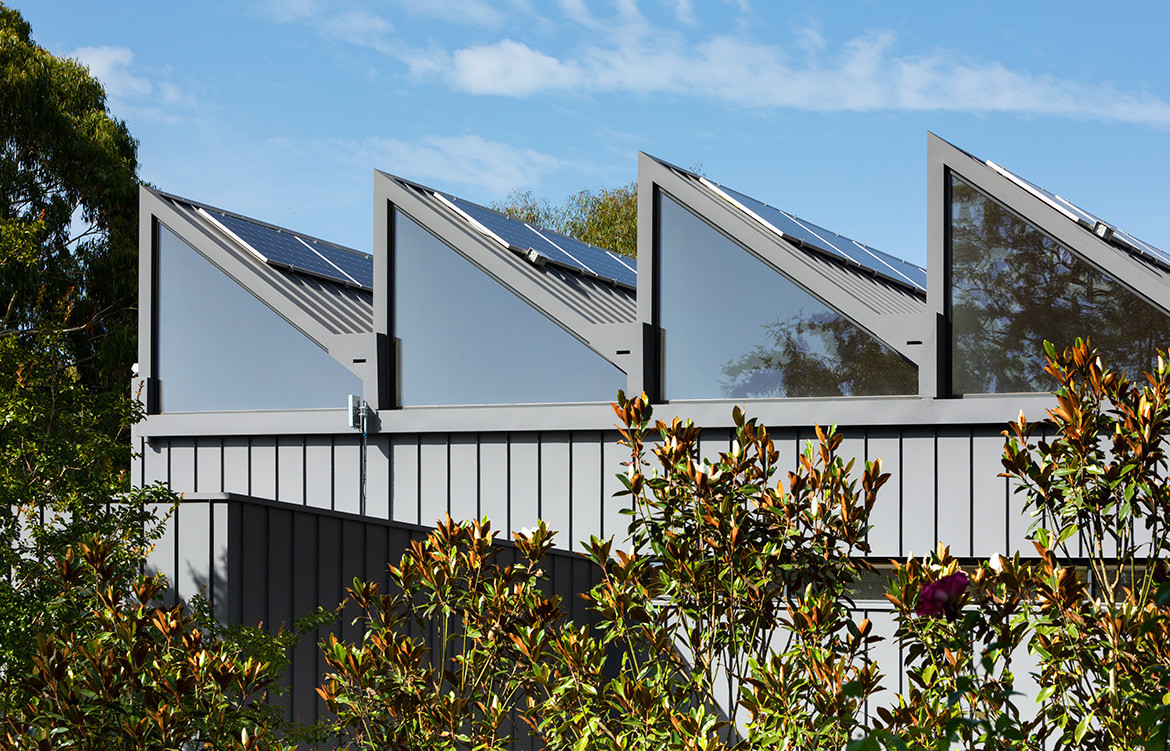 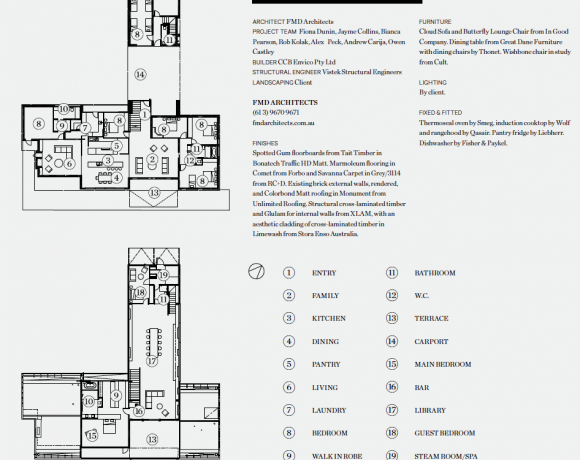