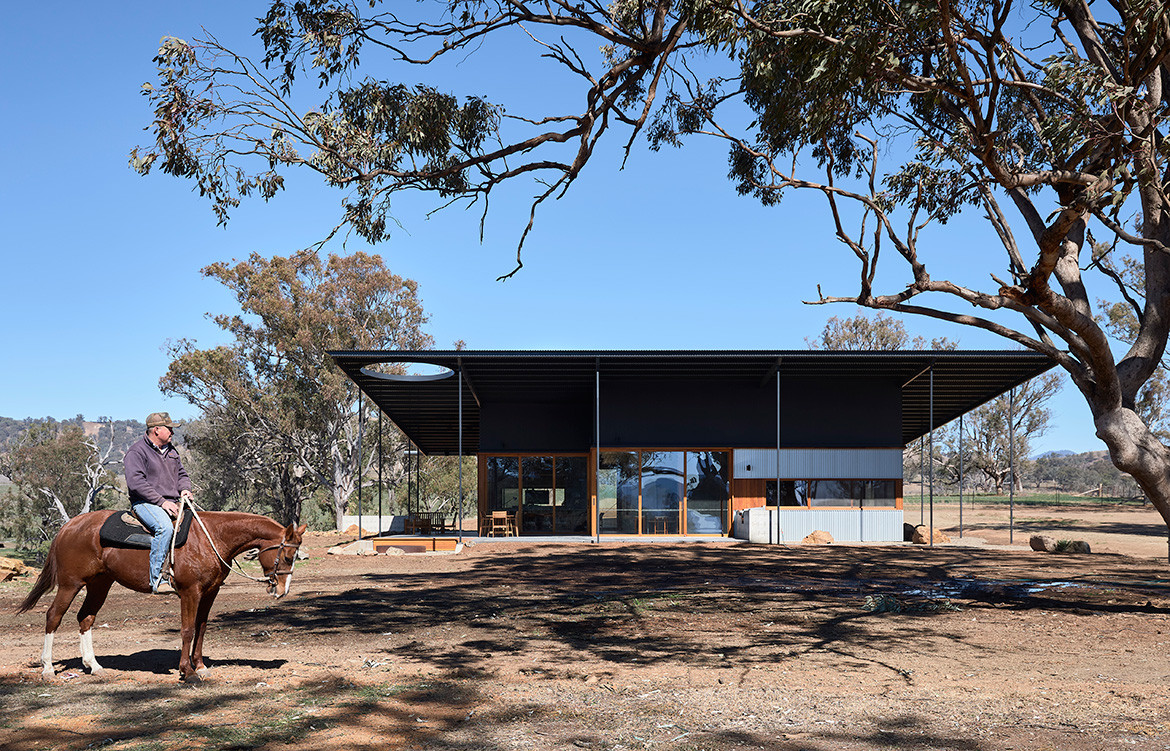 The residents of the Upside Down Akubra House came to architect Alexander Symes with a relatively comprehensive brief. They owned a 314-hectare bull farm outside Nundle (50 kilometres south east of Tamworth) and had already selected the spot on which the house was to reside. At the crest of a gentle hill the clients wanted to capture the views in literally all directions: Yella Rock to the south, Hanging Rock to the east, views north through a grove of Eucalypts and west over the bull paddocks to the rolling hills that follow. “Essentially an amazing 360-degree view all the way around,” says Alexander. But it wasn’t that simple: given its remoteness, it also needed to be completely off-grid.

Alexander’s strategy to reconcile uninterrupted views all round and a comfortable internal climate was to design a massive roof structure with large overhangs wrapping around the entire building. This resulted in a roof 2.5 times the size of the 195 square metre floor plan. This blocks out direct sun during summer, but allows it in during winter to warm up the exposed concrete floors and walls, with concrete chosen for its ability to create thermal mass.

In fact, explaining this strategy to the clients is how the name for the project came about. Borrowing an Akubra hat and flipping it upside down, Alexander was able to describe with visual reinforcement his concept.

Inside, past an air lock entry designed to conserve the heat in winter as guests enter or exit, the house is organised around a central spine that contains the utility and service areas. On the western side of the plan are three bedrooms, within the service core is an ensuite to the main bedroom, a common bathroom and laundry. The eastern side forms an open study, living and dining area connected to the kitchen that flows out into the outdoor living space. Sliding glass doors access the impressive view towards Hanging Rock, while smaller ribbon windows continue all the way around the house.

“There’s a larger window to wall ratio in the living spaces because that looks out to the views,” says Alexander. “But on the west the widow to wall ratio has been reduced so that you can minimise the amount of solar gains and thermal conductivity through the façade.” Moreover, this balances privacy for the bedrooms with the client’s desire for 360-degree views. “Through design or luck a lot of my projects are about aligning prevailing winds, views, and solar orientation to create the building form,” he continues.

Blackbutt Hardwood has been used for the doors, windows and joinery while the ceilings and awnings are finished with Radiata Pine. This gives a natural and warm feeling to the interiors and, in conjunction with the exposed concrete, a colour palette that mirrors that of the surrounding landscape.

The skillion roof intersects with the carport roof in a double skillion style. The 80 square metres of the carport roof are comprised of LG neon bi-facial photo-voltaics, which in turn generate enough energy to run the house. The angle of the main roof and a 450-millimetre diameter gutter encourages rainwater to the eastern corner of the roof, where it free-falls “like a waterfall” into a concrete trough. This then feeds the rainwater into a 107,000-litre rainwater storage tank that collects enough water for the household and the management of waste.

“When it does rain it’s a joyous occasion,” says Alexander. “It’s about playing with the theatre of those moments [but] it’s not theatre for trickery’s sake, it’s theatre for what I consider real issues in the world such as water security and efficient use of resources.”

Living off-grid is by no means a new concept, concedes Alexander, but he notes that in this location – both remote and very much at the mercy of extreme weather – it’s entirely necessary. 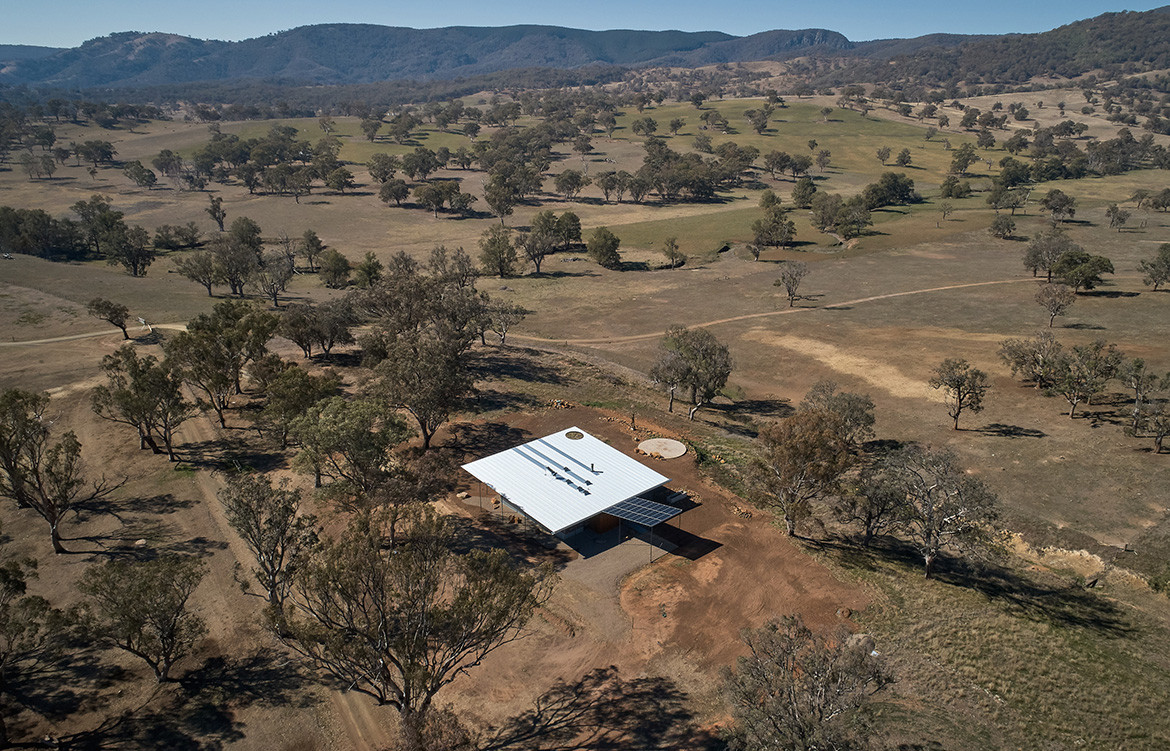 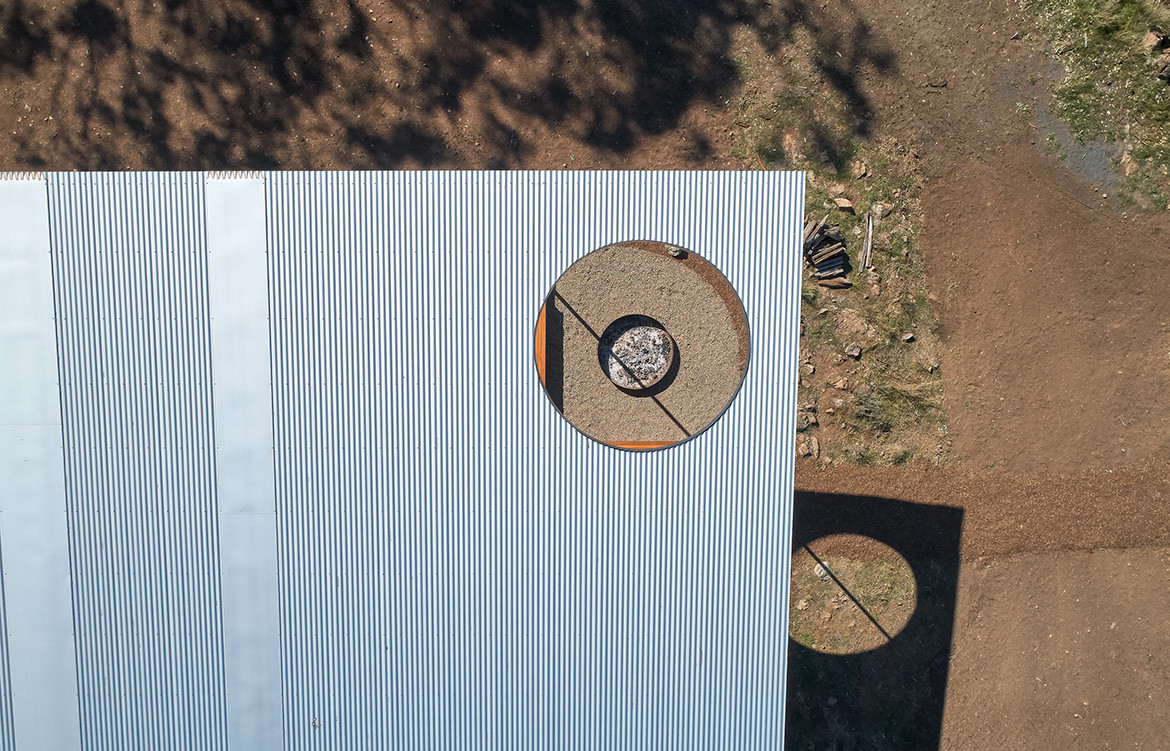 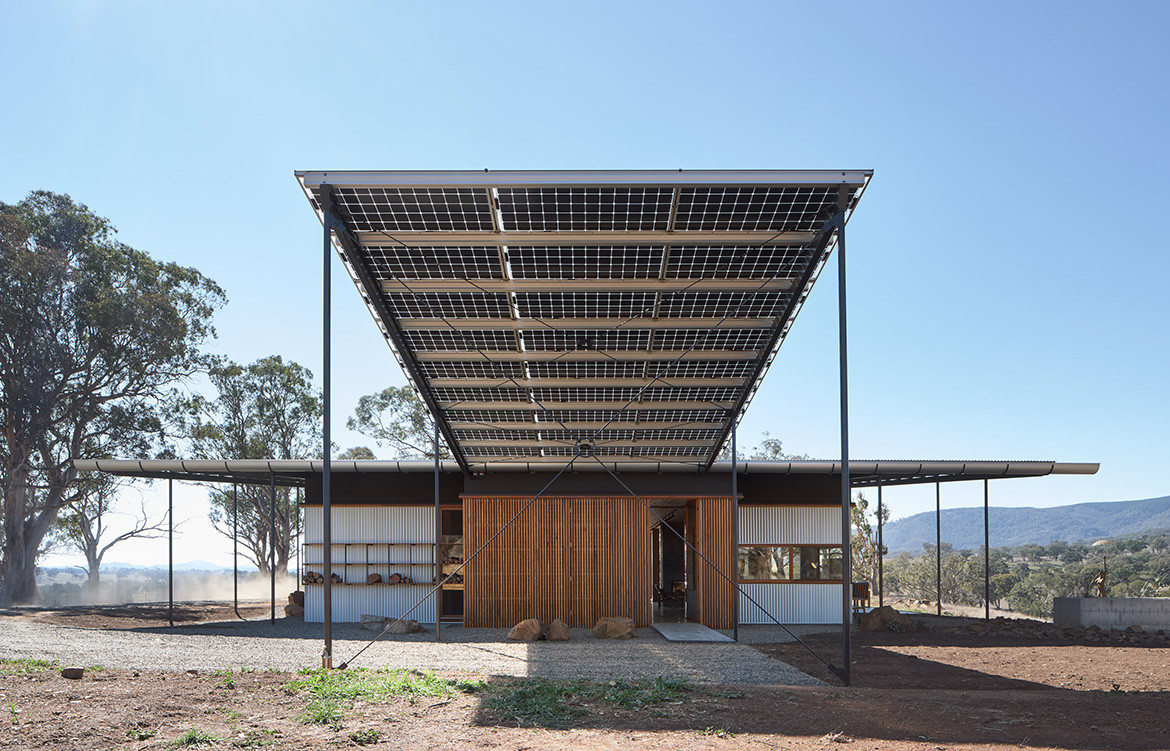 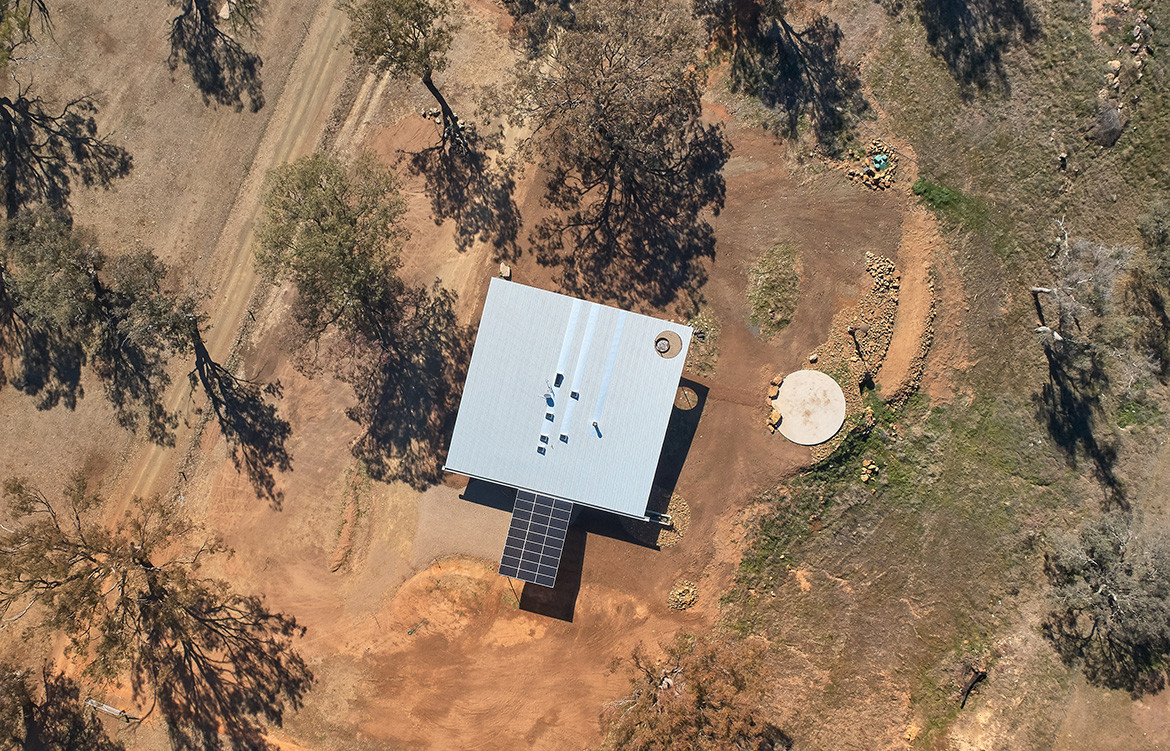 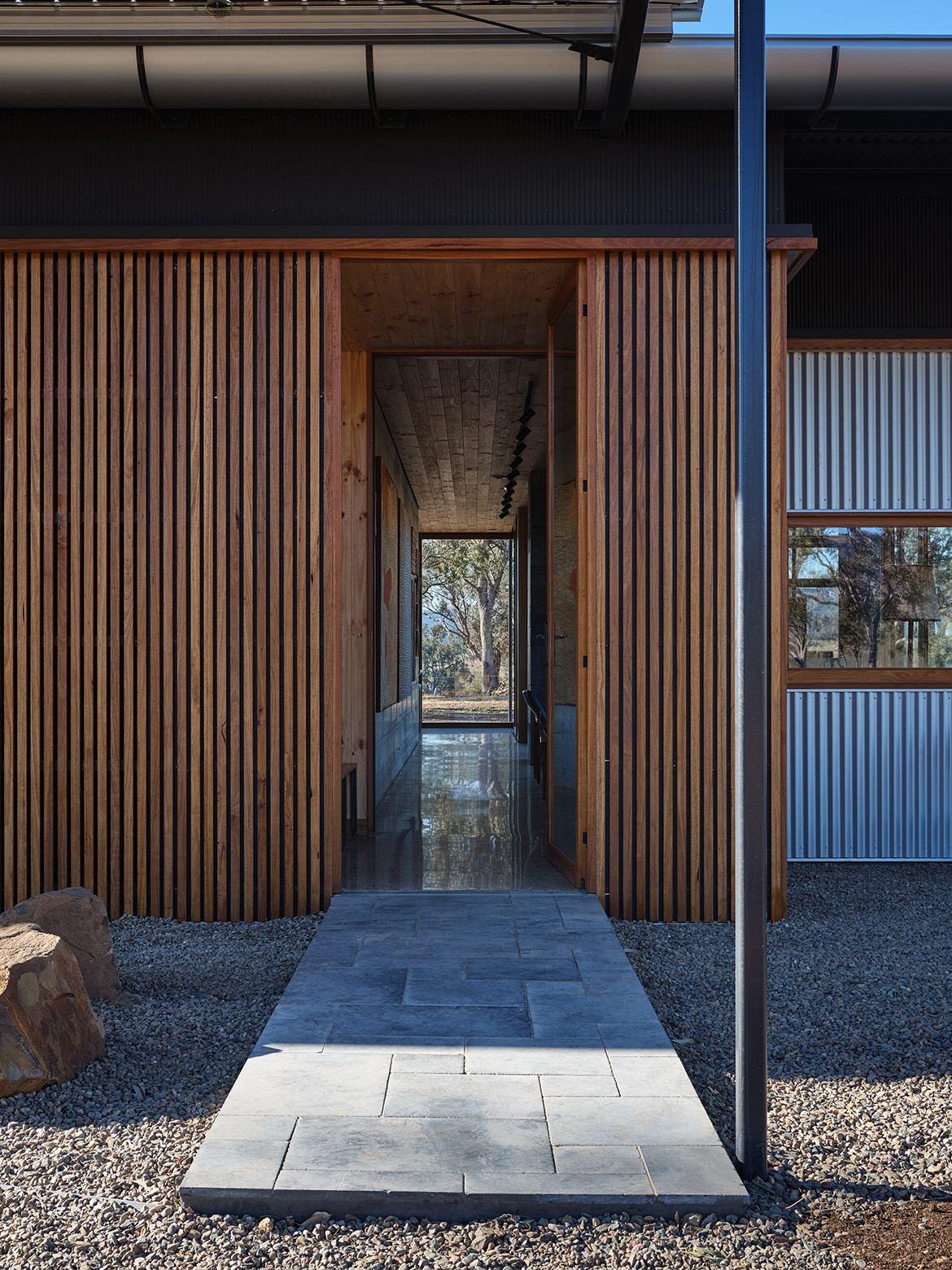 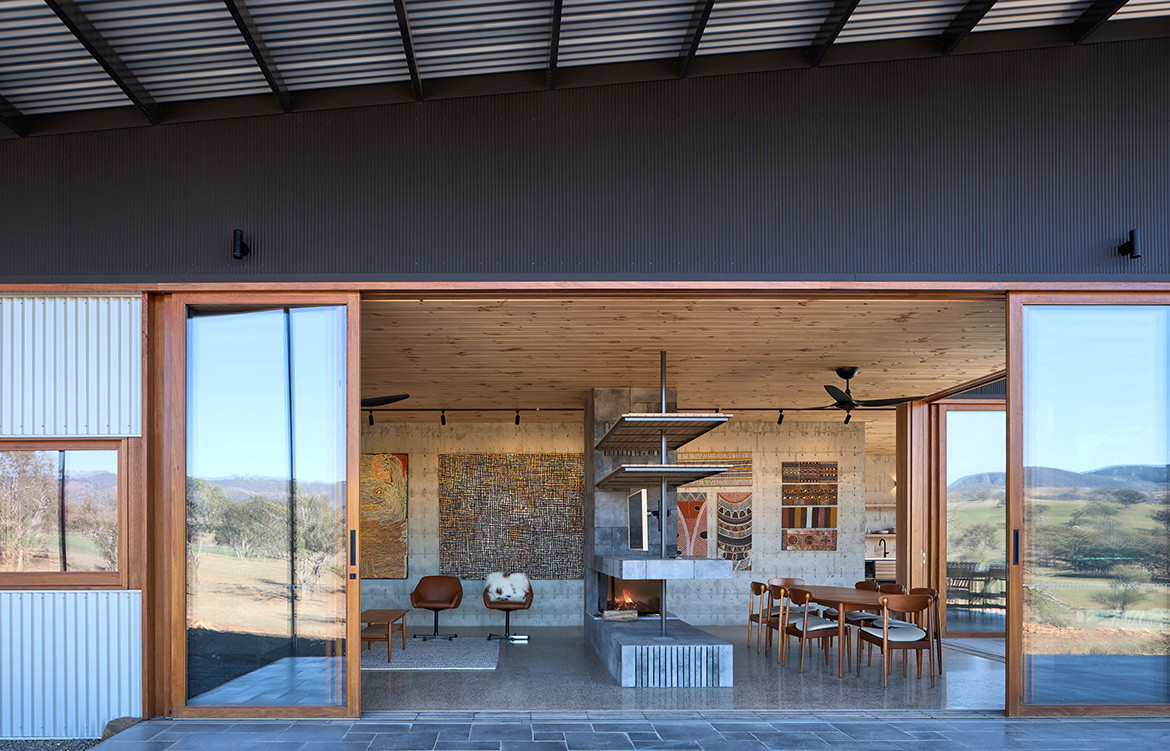 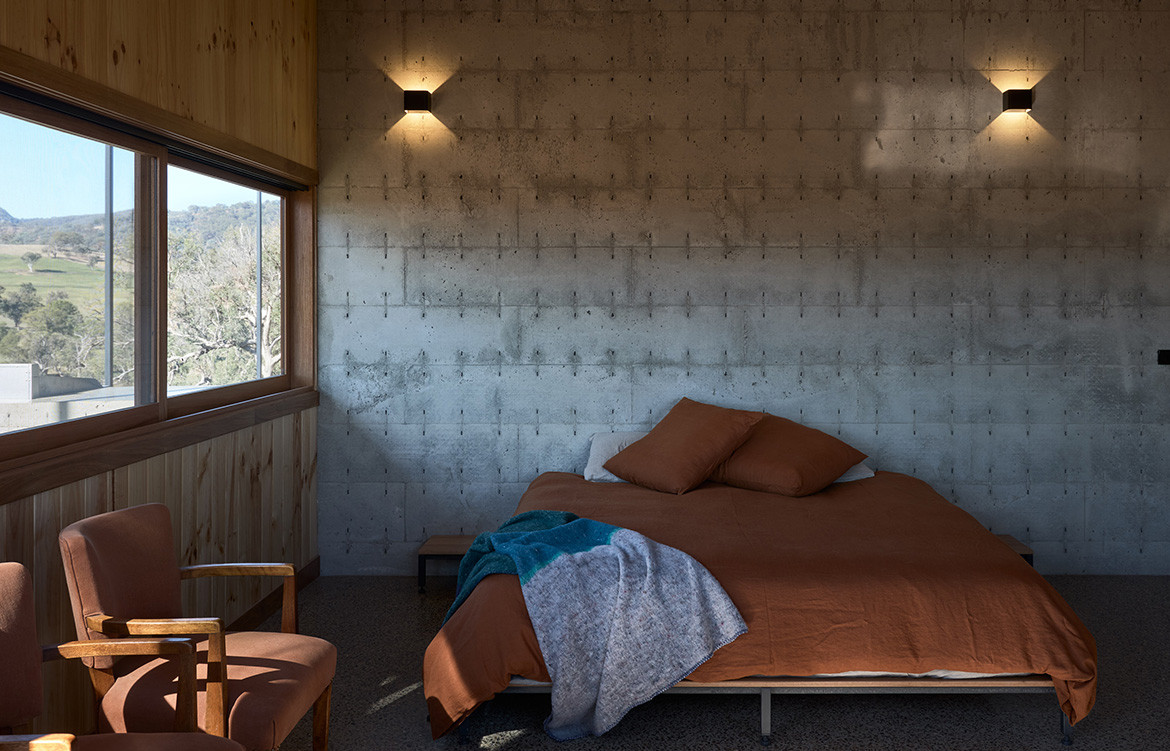 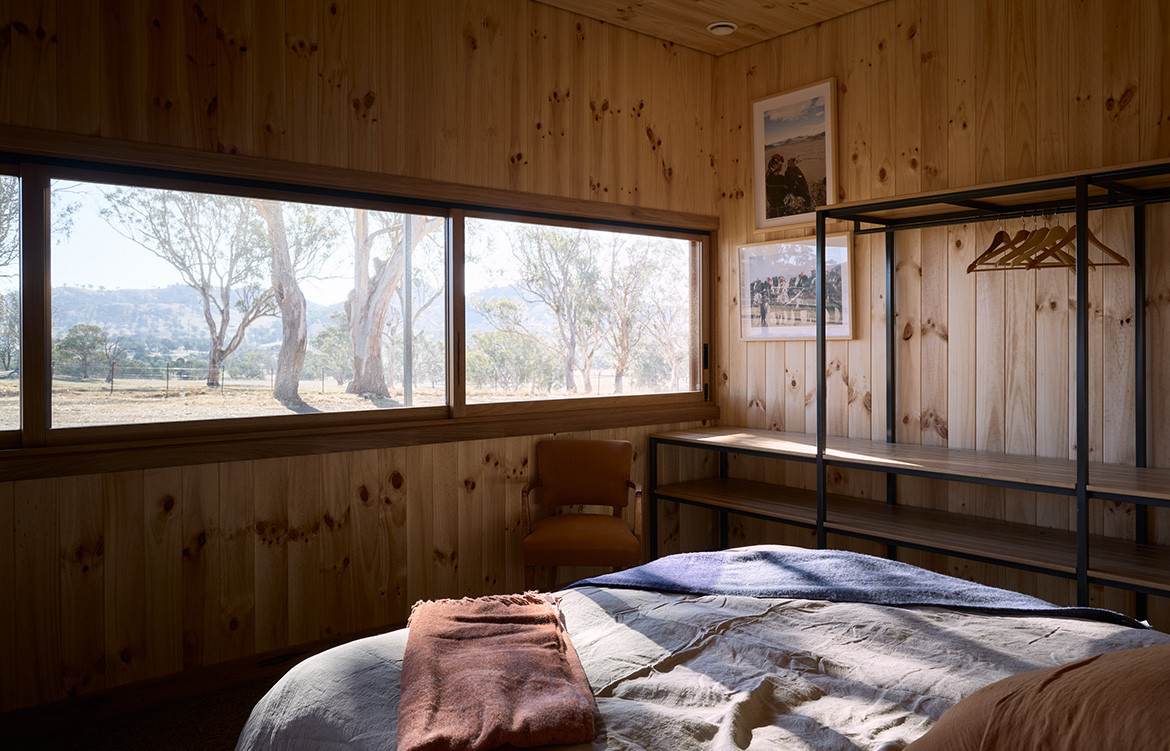 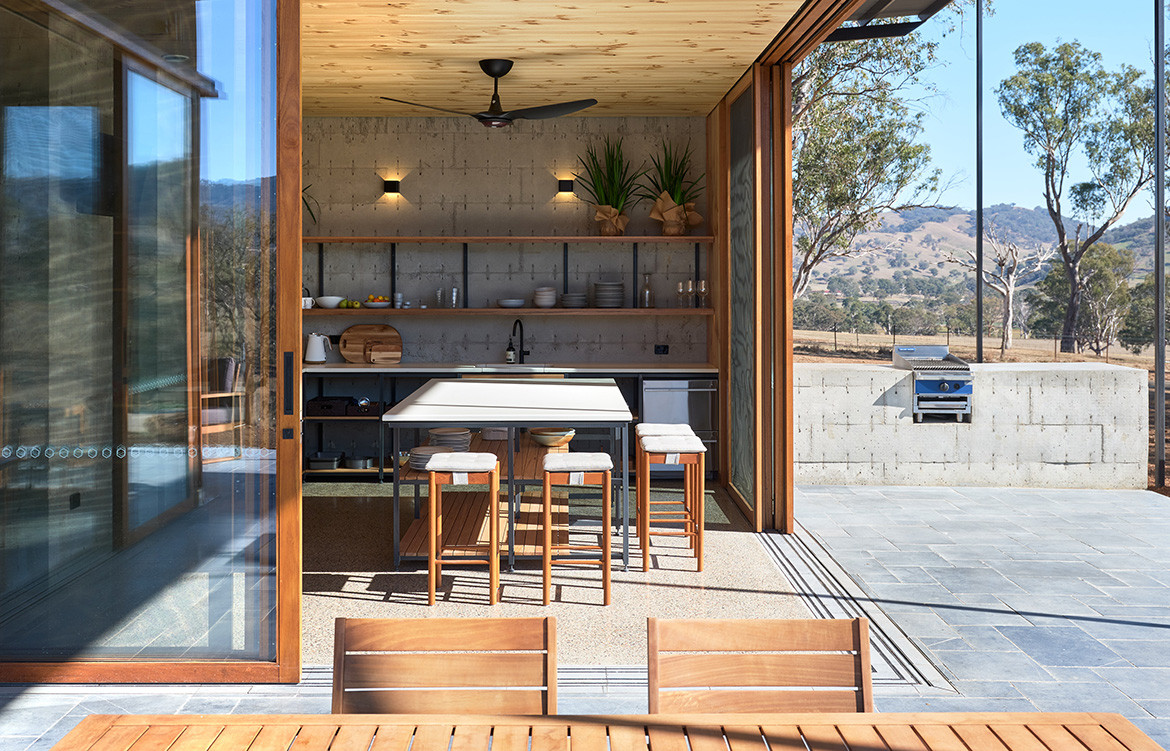 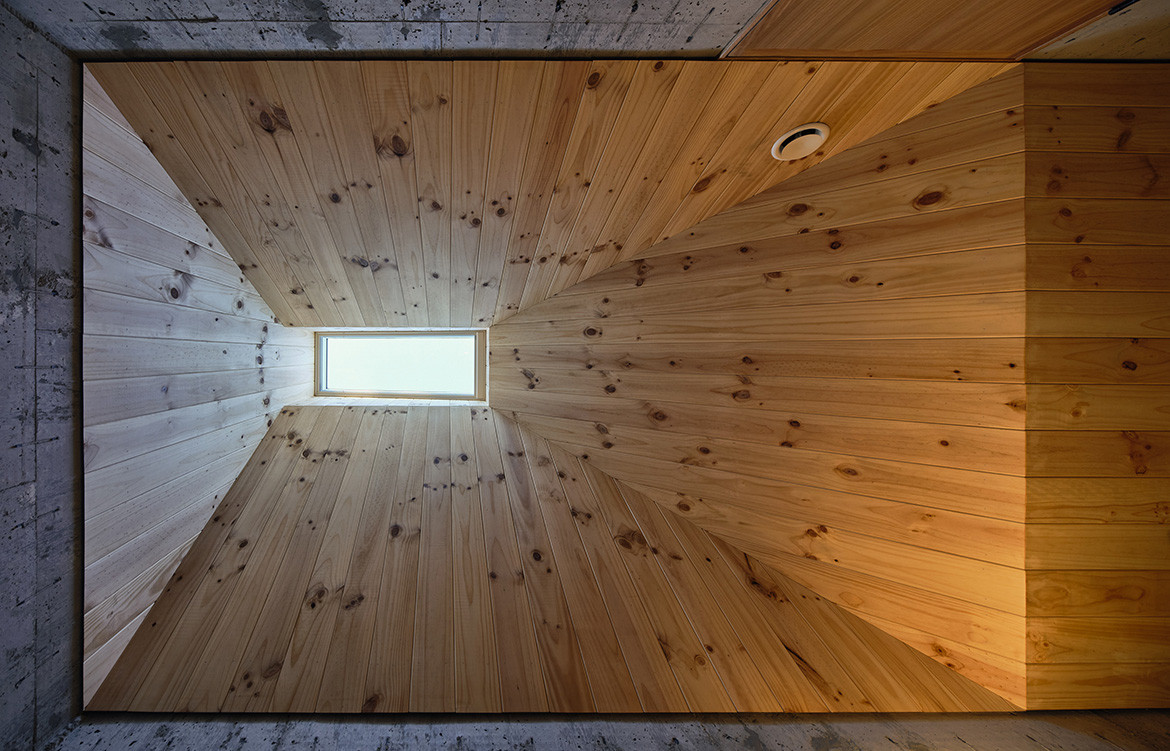 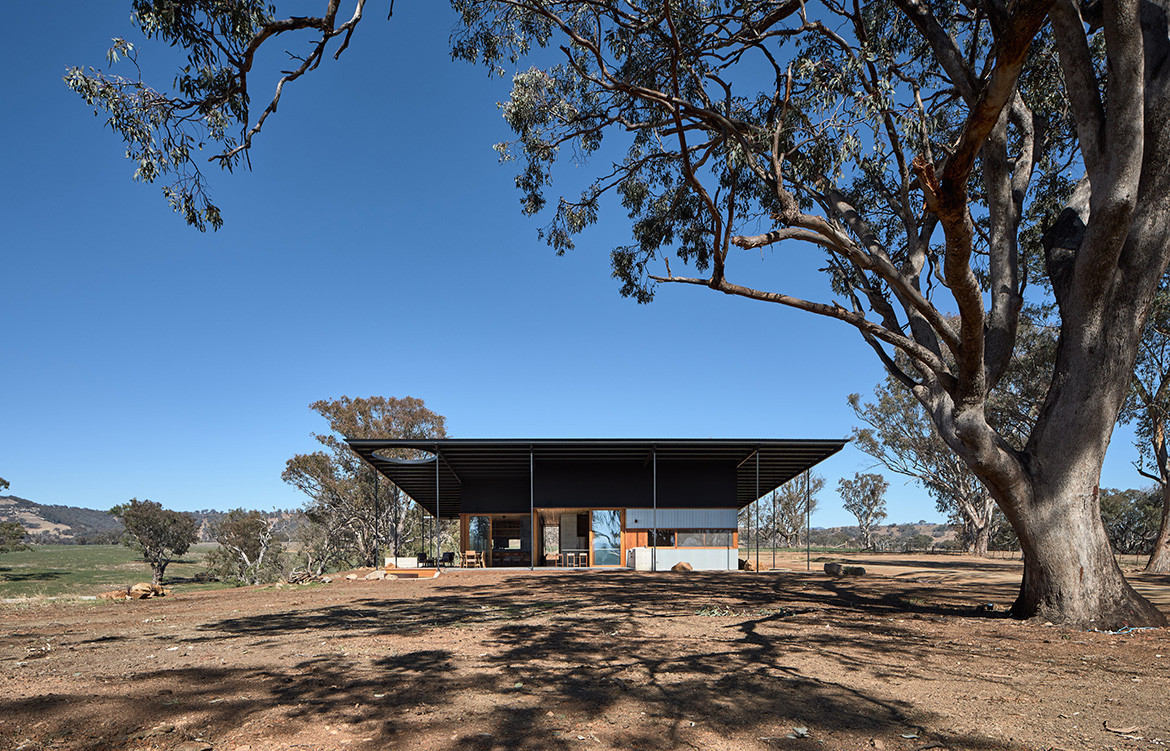 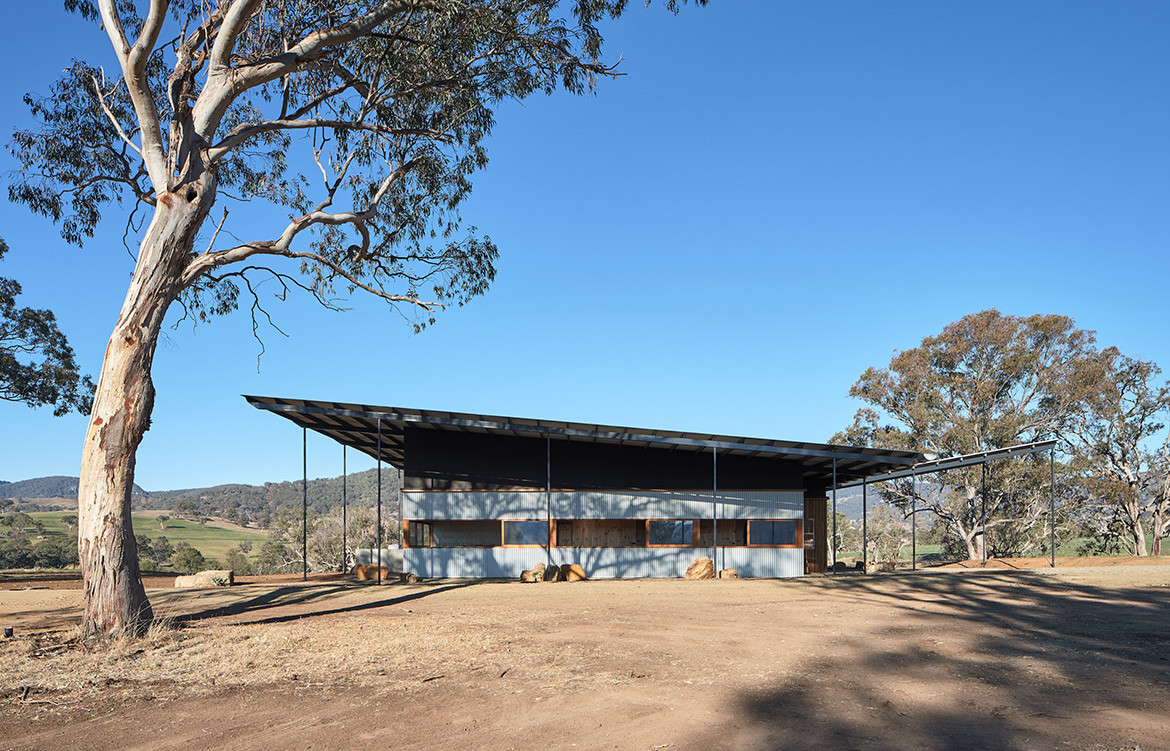 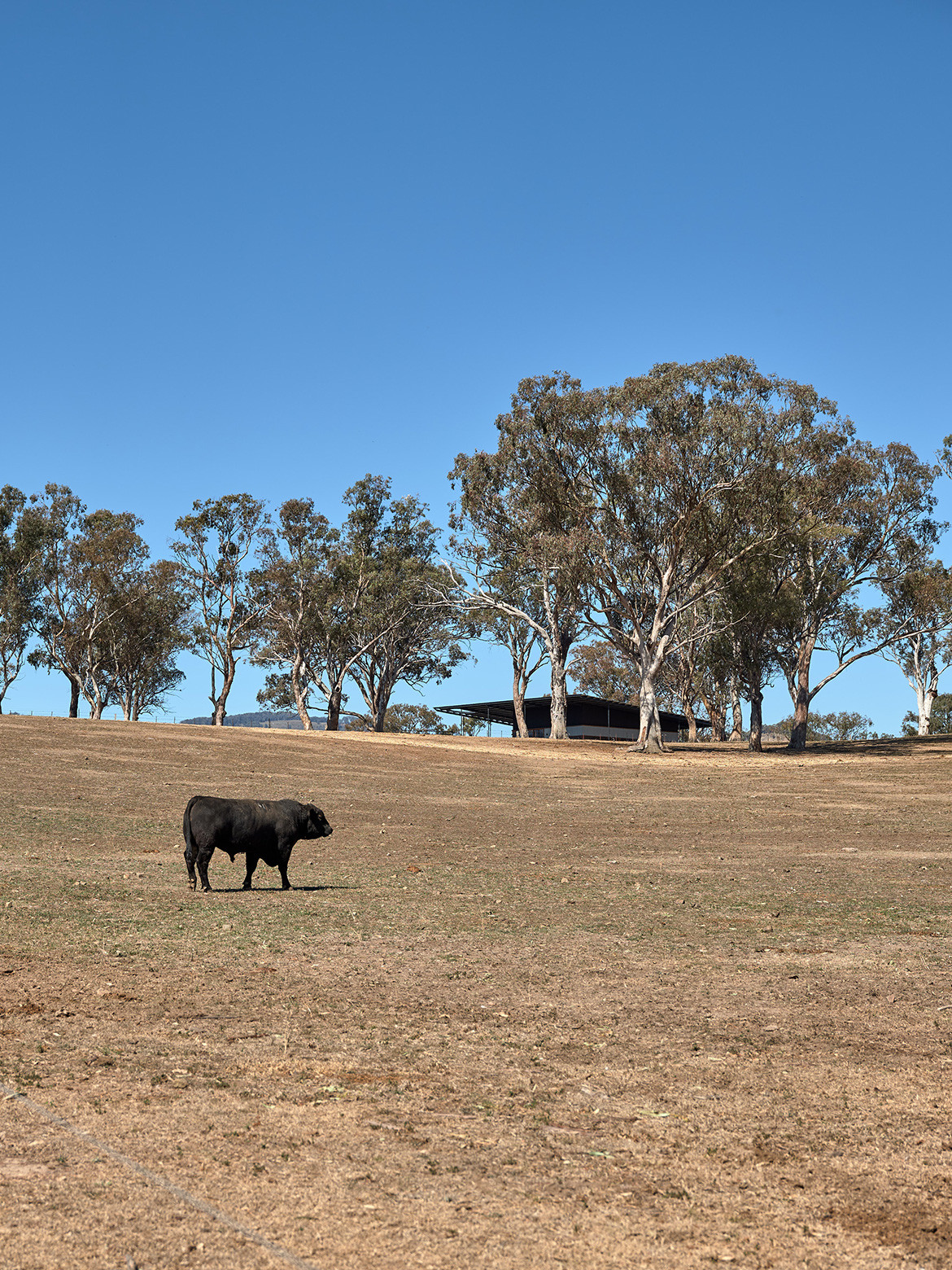 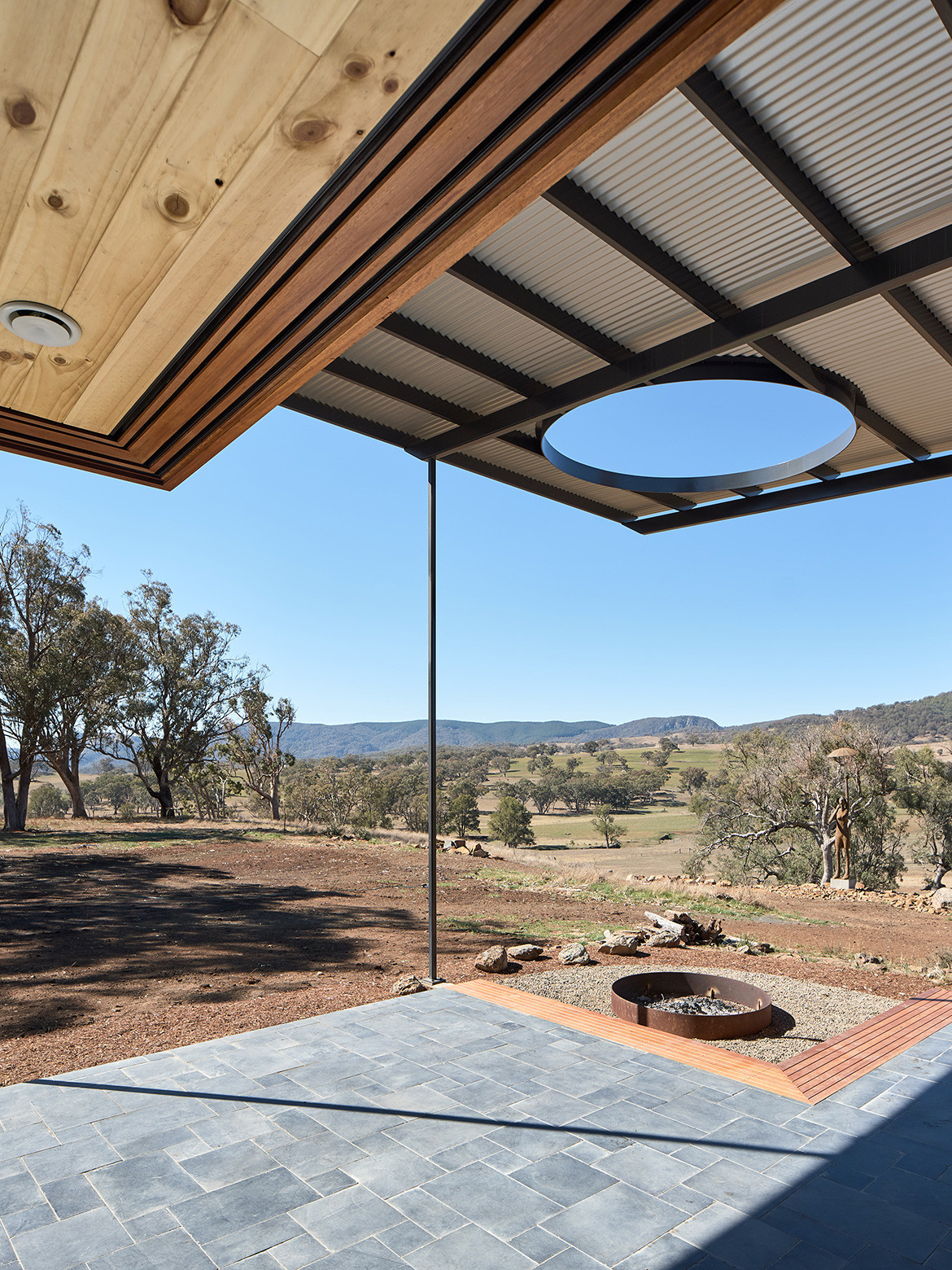 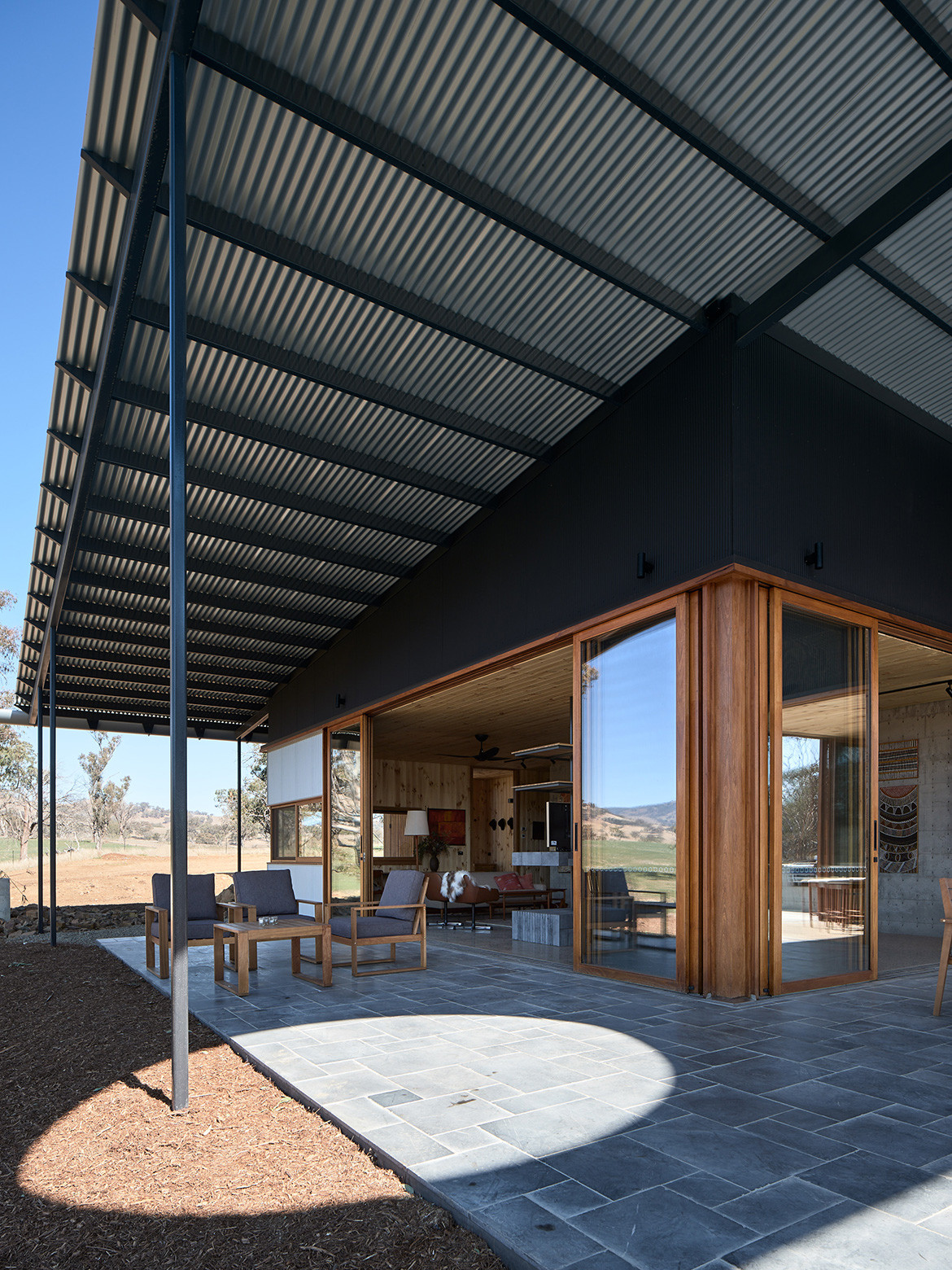 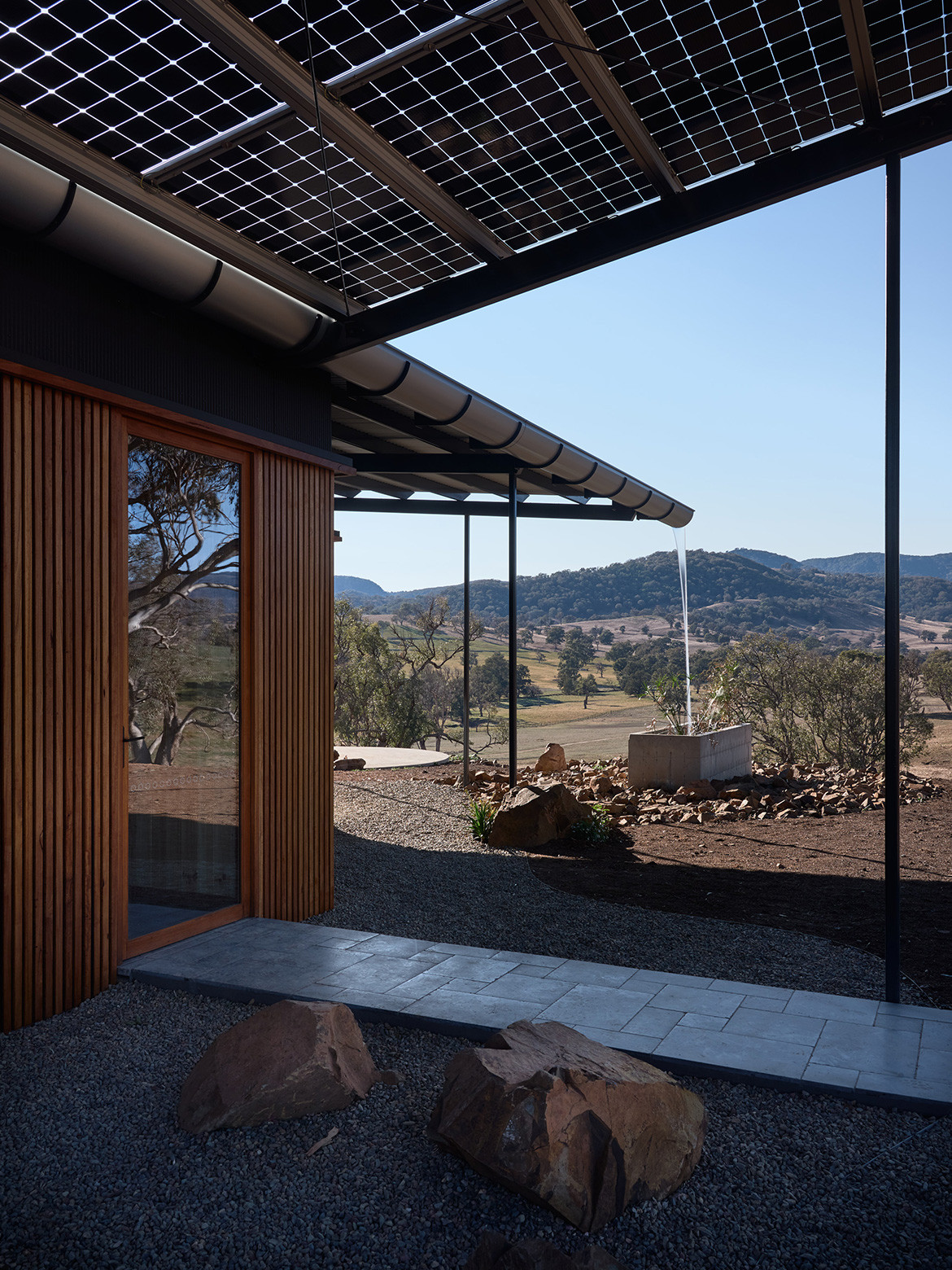 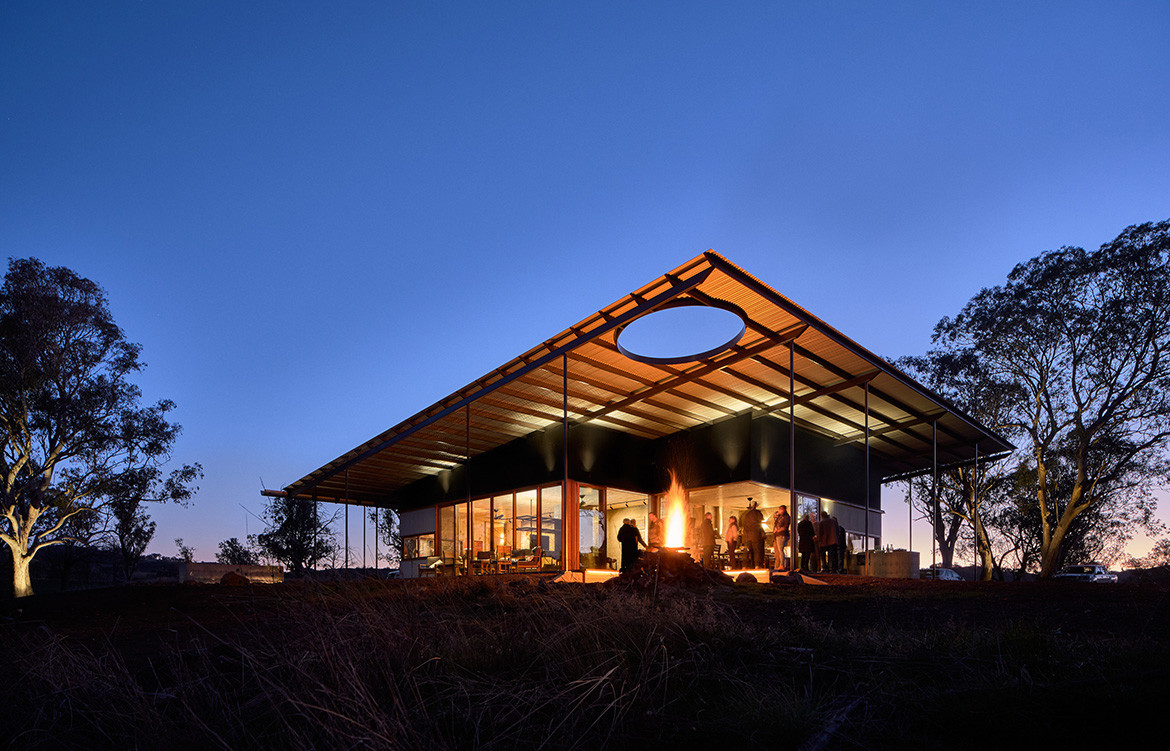 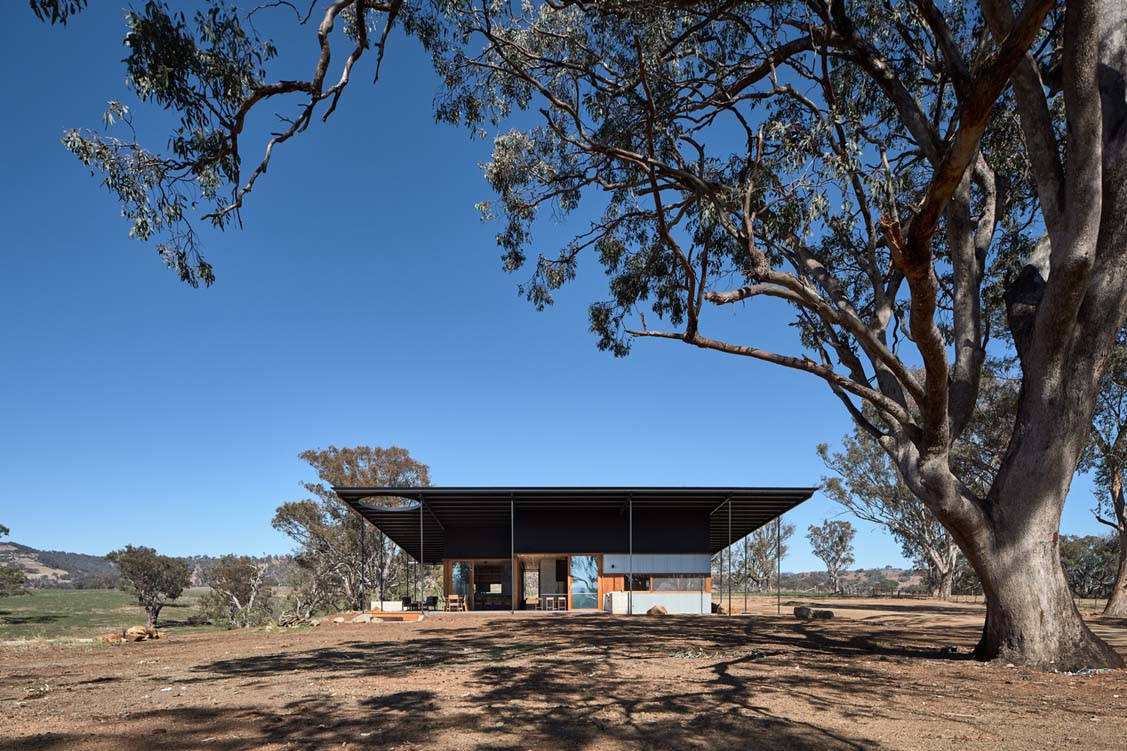 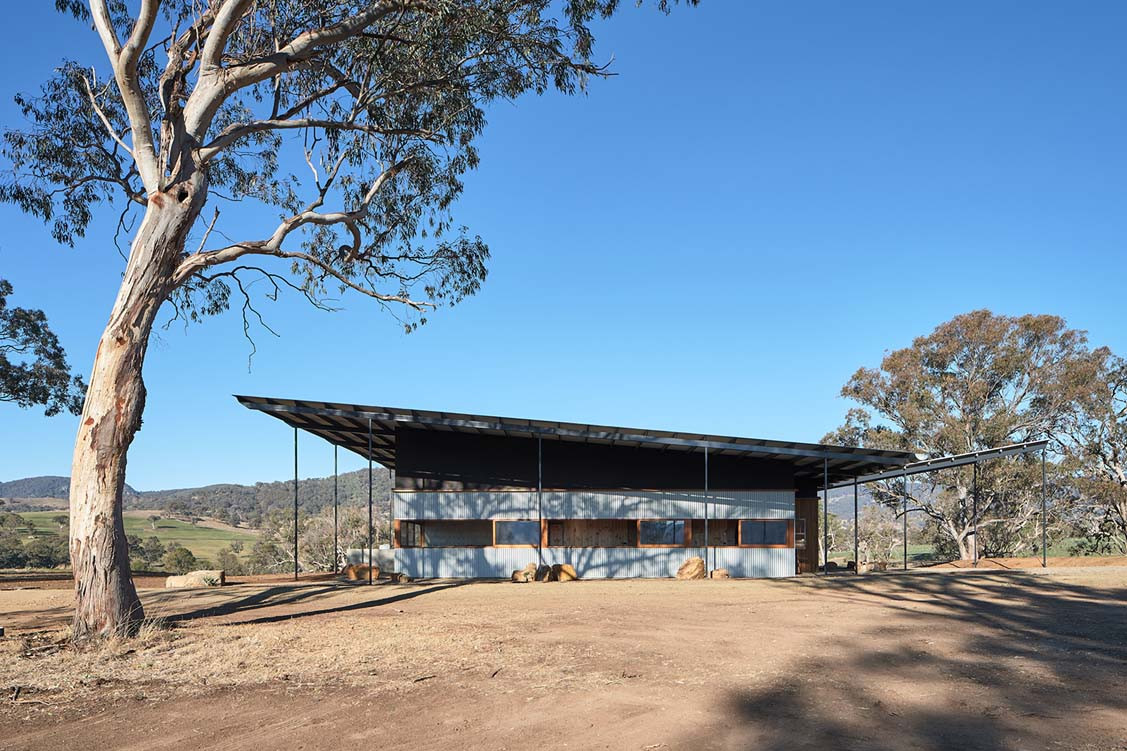 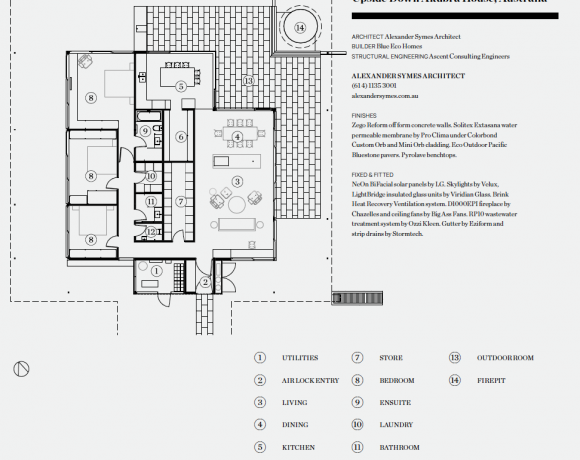