A Celebration of Walnut & Oak:.. 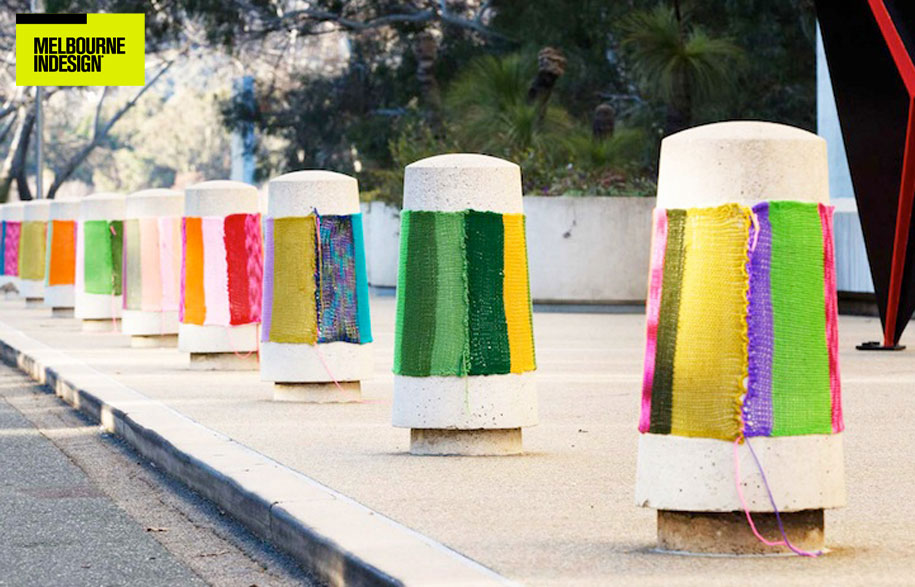 Yarn Bombing, or Guerilla Knitting, Graffitti Knitting – there is not only one name – has become a well recognised form of street art over the past few years. Rather than chalk or paint, groups take to the streets with colourful yarn. We talk to a Melbourne knitting collective to find out more.

Above: Magda Sayeg
The colourful, slightly softer, comforting version of street art, said to have started in the U.S., “brings textile and fibre crafts to people in a new format,” says Renee Pecas. It’s an art that fuses old with new, and is about collaboration, community, and enhancing public spaces.

Knitting projects, installing sheets of wool on various structures around a city, is commonly done as a group. Magda Sayeg, the ‘mother’ of yarn bombing who founded Knitta Please, a group of artists who pushed forth the “knit graffiti” movement in Texas in 2005, says “it is all about the team” and Annette Fitton of Nini & Wink and from the Melbourne knitting group we spoke to, says the same: “The product of this creative collective is far greater than its individual parts.”

Working with others also encourages creative risk, says Annette, “The projects that come our way give us all a chance to stretch our imagination, a chance to step outside our comfort zone and shine.”

Magda Sayeg, Walter Flat
Using public architecture and common spaces as its canvas, Yarn Bombing directly engages the wider community. The choice to work in common areas – wrapping lamp posts, buildings, trees – is not the result of convenience, it’s central to the art’s purpose. “I think it’s important for people to have a say in what happens in public space,” says street artist Suki. “Yarn bombing is a way to challenge the way we use public spaces and help change how people see their environment.”

For Julie, working with architecture is about “the fluidity of hard and soft where traditional craft meets industrial edge, where two things that wouldn’t normally combine, for a period of time are partners and synergistic. A cold hard steel, concrete or wooden structure can be soft, bright and cheerful covered in colours and flowers.”

Magda Sayeg
Since its beginning, groups all over the world have found pleasure in knitting for concrete and steel. Dressing up the potentially sterile spaces in a city not only brings joy to them through making, but through those who appreciate it. “I love to see how people on the street appreciate the look, feel, colour and diversity of mass yarn bombing,” says Annette. “The old guys who looked out of the pub window with disappointment on their faces when I removed some tired old pieces of yarn bombing from Brunswick earlier this month made me see how much it meant to them.”

It’s kicked off throughout Australia, with Guerilla Knitting Sydney, Melbourne Street Knitters among others. Pieces of knitted wool can be seen in various parts of the city, some subtle, on a small branch, or bold, wrapping entire structures.

Chile, Valdiva. Image via Street Art Utopia
As Annette mentioned, the groups attract exciting projects. The art has become more than a hobby, being picked up and commissioned by events teams. Next weekend, the collective we spoke to – including Susan Campbell-Wright, Annette Fitton, Glynis Nott, Suki, Renee Pecas, Julie Trait and Malinda Doobie – will have their work on show at Melbourne Indesign.

With a short-time frame and specific space, the installation in the Galleria space, which involves commercial knitters Otto & Spike, is, says Annette, “an extreme sport of kinds – exciting, risky and potentially expanding the vocabulary of yarn bombing everywhere.” “Ultimately harmless, silly and fun, the final result will only be fully realised “after the event”. So, if you’re in the area, their installation is a perfect opportunity to see Yarn Bombing in the flesh!

Art that changes your experience of place