A Local Touch Informs This Bea.. 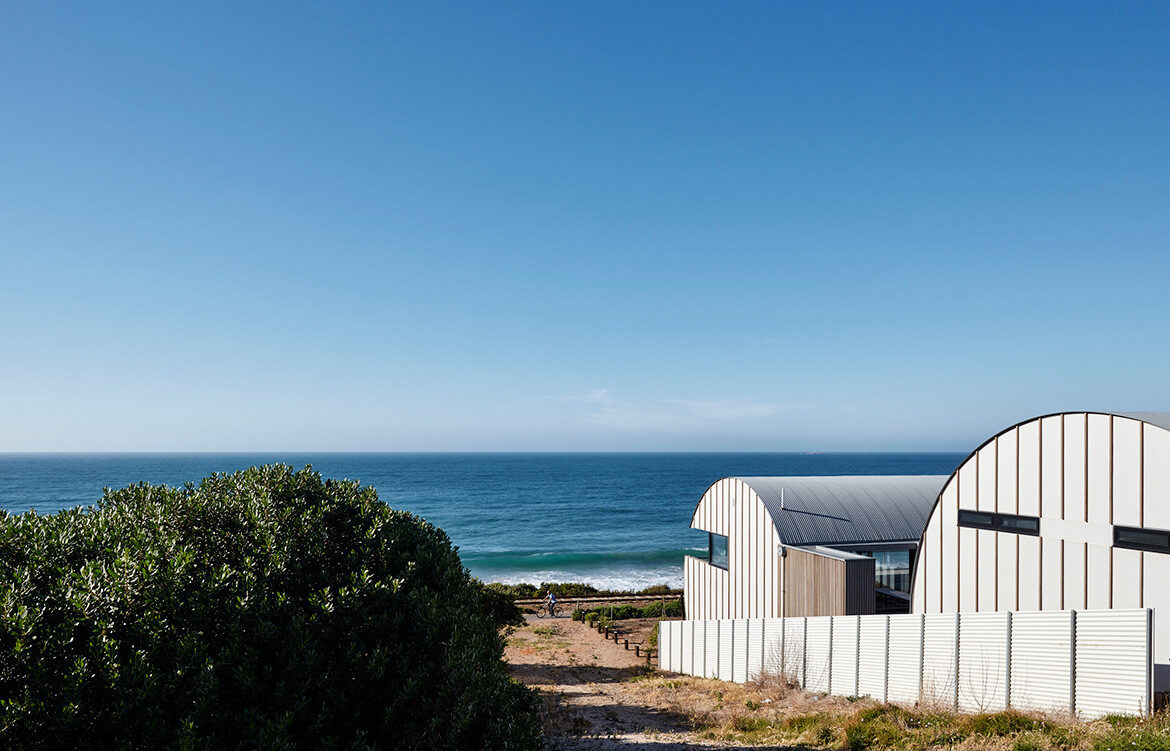 There’s quite possibly no other architect working in South Australia today who responds to site with the degree of mindfulness that Max Pritchard does, evident in this Nissen Hut structure overlooking Boomer Beach. Of course, it would be remiss of him not to, considering the extreme environments in which the majority of his residential projects are situated. His portfolio spans coastal, rural and hills locations and his designs are architecturally rigorous without being ostentatious, sympathetic without resorting to cliché. It’s what he’s built his reputation on and after more than 30 years in business (daughter Tess Pritchard and Andrew Gunner joined him as Directors of Max Pritchard Gunner Architects in 2015) and multiple awards later, he’s producing his best work yet, in some of the state’s most remote settings.

Unsurprisingly, his most recent clients, who live in Adelaide, contacted him after seeing the home he had designed for their friends in Victor Harbor. The professional couple with two teenage children had recently purchased a block of land on a stretch of Boomer Beach in neighbouring Port Elliot, another of South Australia’s popular beachside Fleurieu Peninsula towns, with a view to building a holiday home.

They wanted a beach shack; something relaxed and not at all pretentious and when Max showed them his initial concept reminiscent of the iconic Australian Nissen Hut, they were very excited about it. “We didn’t need to go through a number of design iterations, partly because I like to think things through before I put something down on paper,” says Max. “But mostly because this particular design seemed to be so appropriate for the site and the brief that I didn’t feel the need to present any alternatives.” Port Elliot is an eclectic mix of late 1960s beach houses, oversized slick getaways built in the 1990s and bespoke retreats no more than two or three years old and Max’s design stands distinct amongst them all.

The new build comprises two large two-storey cylinders on a steeply sloping site overlooking the ocean. They sit parallel to each other (the one at street level is positioned higher than the other) and are connected by a central glazed link. First-time passers-by stop and stare, a mix of curiosity and awe on their faces, because there’s nothing else quite like it in the area. Both cylinders’ curved forms echo the rolling sea – with waves as big as you’re likely to get in South Australia – and their outward appearance also pays homage to the Nissen hut, originally used for storage and as accommodation during WWII. Max admires the simple structure for its humble materiality and this was a definite source of inspiration when deciding to wrap the cylinders in corrugated iron. The economical material is what predominantly lends the holiday home its raw natural expression, downplaying its scale in the process.

Splitting the house in two also diminishes its size by enabling it to better hug the site, minimising the degree of visual obstruction to the homes that overlook it from the street. In this regard, the design is sympathetic to its neighbours, with curved forms providing a softer roofline than any number of angled ones would. But the key reason behind the unlikely configuration is orientation. As Max explains, “The starting point for all our projects is to find a sensible environmental solution, which in Australia’s climate means maximising the amount of winter sun for natural heating, and ventilation for summer cooling to reduce dependence on artificial heating and cooling.”

While the courtyards on either side of the glazed link provide a connection to the outdoors that is sheltered from the strong winds, they also allow for north-facing windows in the cylinder closest to the ocean. This structure accommodates the open plan main living areas that are the heart of the holiday home, so it was important they receive an abundance of natural light without compromising the view of the sea. The lower level’s main bedroom, study and ensuite similarly serve up stunning views while getting plenty of winter sun. And both levels receive passive cooling when the front and rear glass doors are opened. It’s an outcome that simply would not have been possible if the floorplan was contracted – omitting the glazed link and courtyards – and the interior spaces had to rely solely on natural light from the north-facing street entry.

Incidentally, the added benefit of having two freestanding structures is that zoning is clearly demarcated. In this case, the cylinder at street level, with its upper-level rumpus room and four lower level bedrooms, all with their own ensuite, is the domain of the clients’ teenage children and their friends when the family comes to stay.

The most impressive aspect of the interior’s architecture with the Nissen Hut barrels, is that although the house totals four different levels, there’s not one stair between any of them. Max’s aesthetic may be one of understated elegance and simplicity, but the ramps that run between each floor within the glazed link definitely bring an element of drama to the scheme. They also add to the home’s sculptural qualities, not to mention providing the perfect ocean reveal when walking towards the main living areas from the entry.

“To be able to move through a substantially sized building like this one without going up or down a step is unique, especially in the way it slows you down,” says Max. “People often say that corridors are a waste of space, however, they’re not a waste of space if it’s a nice experience. If you’re regularly moving slowly through architecture and there’s a certain rhythm to that movement, then it can be very enjoyable.”

The ramps’ raw timber flooring extends throughout the house (except in the four bedrooms, which feature jute floors, and the bathrooms) and together with the kitchen’s timber joinery and polished concrete benchtops and curved white corrugated iron ceiling, lends the overall design that laidback beach shack vibe the clients so desired yet houses within a Nissen Hut structure. While the material palette may be rustic, it is complemented by fine detailing and high-end furniture selections made by the clients in consultation with the home’s interior designer, Enoki Design. But absolutely nothing beats that panoramic view from the main living spaces and the full-height glazed doors that ensure the ocean feels within arm’s reach at all times. This is a beach house designed to bring relaxation and joy and therein lies its ultimate success.

An Architect’s Home In The Treetops

Studio Prineas Surprise And Delight With This Federation House Addition