The Habitus Edit To Colour In .. 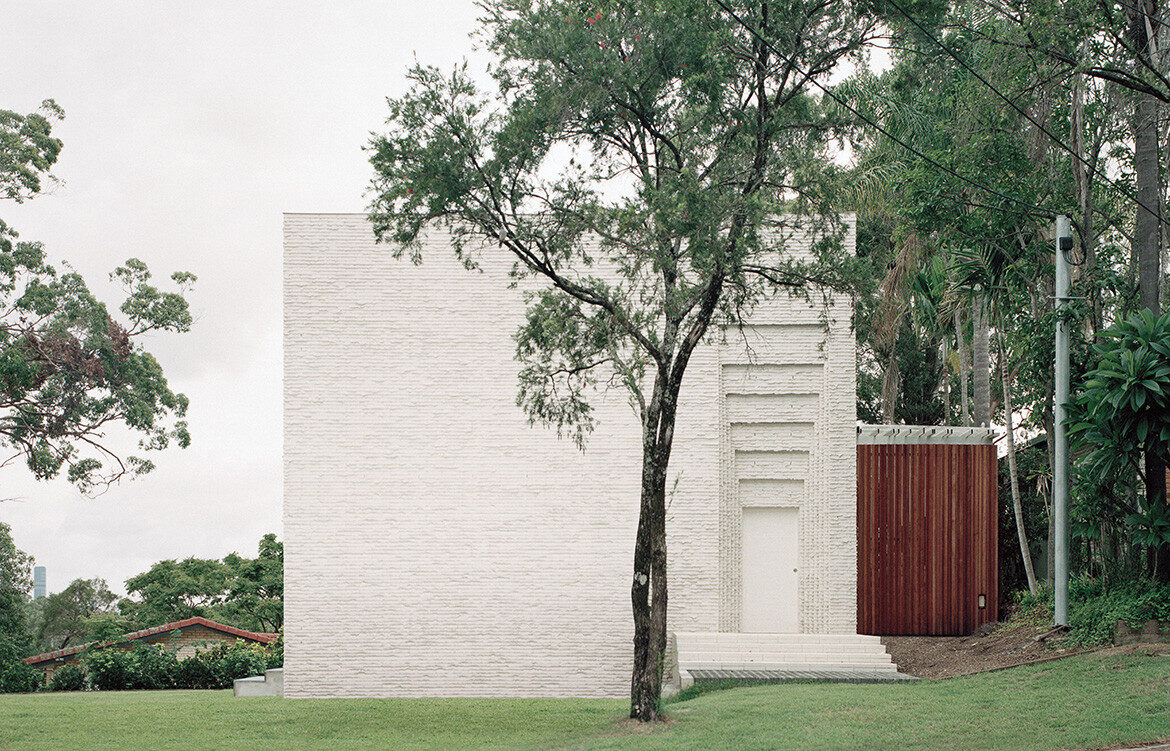 Think of the Brisbane house and you will think ‘Queenslander’. Like other tropical and sub-tropical housing types it is lifted up off the ground and employs shading and cross-ventilation to cope with a hot and humid climate.

But architect Peter Besley notes that the climate is changing and becoming more hot and dry. Moreover, aren’t there better ways of dealing with the climate than using materials that retain heat and sweating it out under ceiling fans?

Peter trained in Brisbane and later in Edinburgh before moving to London where he taught at the Bartlett School, setting up his own practice, Assemblage, in 2004. Back in Australia for a bit over 12 months he has designed a new house for a member of his family in the suburb of Mt Coot-tha.

The west-facing street entry elevation is built from off-white bricks with the slightly extruded mortar creating a ribbed or ‘corduroy’ effect.

Through Couldrey House he was keen to respond to the character of the suburb and its rocky substrate, as well as put into practice some climate control principles learned working in the Middle East, along with a few aesthetic touches from there as well.

The west-facing street entry elevation (as well as the south elevation) is built from off-white bricks with the slightly extruded mortar creating a ribbed or ‘corduroy’ effect. This, with the stone steps and absence of windows, makes the house look a lot like a ziggurat. Backed by insulation, though, this masonry façade’s primary function is to protect the house from the sun.

The east and north elevations are a lot more like you might expect to see in Brisbane with the two levels opening up to the view leading one of Peter’s friends to suggest that the building has a “Janus-headed” profile – two completely different faces – one side lightweight, the other heavy.

Peter Besley was keen to respond to the character of the suburb and its rocky substrate, as well as put into practice some climate control principles learned working in the Middle East.

Couldrey House is also heavy because of its use of concrete. It uses thirty 9-metre-long pre-cast concrete floor and roof units as part of its radiant cooling strategy. Peter points out that it was in the Middle East that he learned about “another tradition of cooling which is to do with thermal mass and radiant cooling”.

It is something we have all experienced going into stone cathedrals that, even on the hottest days, remain cool inside because the stone has stored the cool from the night before. It is different from evaporative cooling or cross-ventilation because it exploits the principle of heat transfer, in this case making use, not just of stored cool night air, but also the cool of the rock substrate.

Apart from the open elevations on the east and north, the closed south elevation does have a series of louvres or slots in the wall. Hidden behind them are glass louvres. This provides internal cross-ventilation while also lending privacy to the house and its neighbours.

But Peter was also keen to build “an Australian house which could just sit there for hundreds of years”: hence the use of concrete and masonry rather than the traditional lightweight materials which quickly deteriorate.

Couldrey House challenges convention in a number of other ways. For example, it inverts the usual organisation of spaces with the public areas – really just one continuous space – on the upper level and bedrooms downstairs. The upper level is accessed by a grand stairway that continues the ceremonial entry steps. “There is a great feeling when you come in and go up those stairs into a double height space,” says Peter.

Downstairs the slab follows the topography of the hill so that every bedroom has its own floorplate with the linking corridor stepping down for each bedroom.

One thing lost in reversing the standard lay-out is the immediate access to the landscape from the ground floor. Peter is compensating for this by using 25 metre-long planter boxes which will eventually grow up “like a jungle” and take over that whole elevation.