On The Ground In Milan: Archit.. 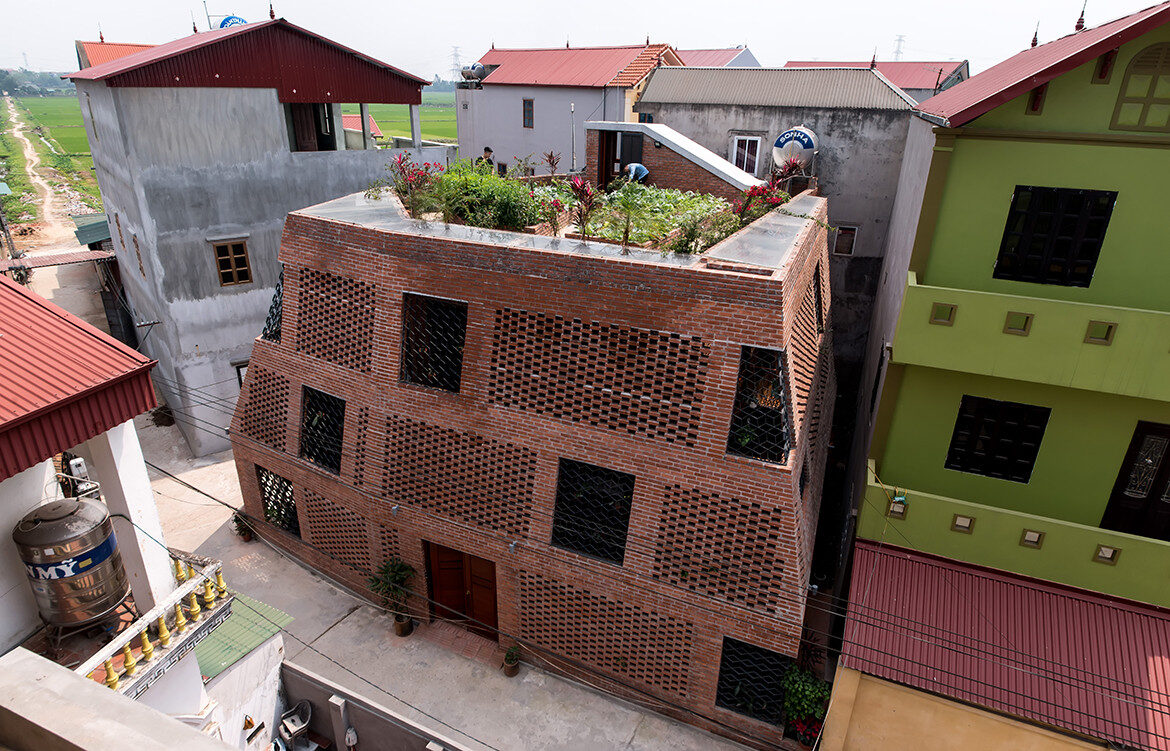 To what extent can and should architecture mimic natural spaces and forms? H&P Architects have created a chain of interconnected spaces in this unusual brick house in Hanoi, where daily life is layered with glimpses of plants and the sky.

Brick Cave is a two-storey brick house in a small village in a northern suburb of Hanoi. The 175-square-metre plot of land was originally an ancestral vegetable garden, inherited by a son who lived far away. Now he has come back to his homeland to live near his mother. Normally, people sell half of the land they are given and build a house on the other half; thus, much of the green area in the village has been developed into dense blocks (much like urban houses) with muted side walls that lack windows. Many typical features of villages, such as community courts, neighbourhood communication, and a peaceful and airy atmosphere, are lost. Bordered by two lanes but taking a distorted shape, the land on which Brick Cave sits faces west and has no significant natural features except a few trees at the corners. On this plot, H&P Architects have designed an abnormal house, which meets human demands for diverse uses while fitting the context of the location.

The 20-centimetre-thick reinforced-concrete floor allows two bedrooms and a bathroom on the upper floor without any structure below, accommodating spacious shared areas on the ground floor for flexible usage by the large family: worshipping, receiving guests, cooking, dining and parking. In particular, there are a lot of playing areas for kids from the three or four families that live nearby. The owner confides that his sons who are working in the city still want to come and live in this house after their retirement.

H&P Architects have developed a ‘double skin’ principle for the walls. An outer layer (of ‘fences’) and an inner layer (of ‘facades’) of non-parallel thick brick walls create tall and spacious buffer spaces around the house for ventilation and heat isolation. They also blur the boundary between the inside and the outside. The outer wall has multiple openings with appropriate patterns that make people feel safe and private yet not constrained nor isolated from the outside world.

At a height of 2.55 metres (out of the total 8.25-metre height), this wall starts to recede inwards with the purpose of reducing the building’s massive volume, as well as sharing air space and providing natural light and visibility for the neighbours’ houses, thereby helping improve the microclimate. The H&P Architects team also ensured that adverse weather effects (such as rain, sunshine and heat) are minimised, so the house is always cool (air-conditioning units are installed but rarely used; doors and windows are only for keeping warm in the winter). The landscaped roof, which evokes the image of the former vegetable garden, also brings a cooling effect.

The main material, brick, is sensibly familiar to the locals, yet upgraded in terms of aesthetic and construction technique. The local builders can now create beautifully complex brick walls even without plastering. The rough brick walls also find a harmonious dialogue with the surroundings, where houses are built with cheap materials and are unfinished.

The flooring materials are stone (ground floor) and timber (upper floor). The colours are generally dark (with the crimson bricks and brown timber-clad ceilings), but they enhance the effect of sunlight in the interior. If the concrete beams had been exposed, the construction would have been simpler and the architecture less heavy. Also, if the position and dimension of the solid and hollow patterns in the walls had been adjusted, the Brick Cave concept could have been more effective. Yet the voids on the outer walls, with decorative frames and climbing trees, will create hanging gardens that will maximise the environmental and aesthetic effects.

The architectural ‘wellness’ of this building is not just about a comfortable dwelling, but also the ability for it to adapt for long-term living on a challenging site, and in friendly symbiosis with the neighbours. These things make the physical space a human place.