The beauty of reclaimed and recycled timber is only partly aesthetic – the knowledge of its former function adds a whole other appeal. Jaz Sidhu visited the island of Langkawi in Malaysia and discovered a home designed by Building Bloc (who’s Desa House is featured in Habitus 18) that generates new life for old timber electricity poles.

Langkawi refers to an archipelago of 99 sun-soaked tropical islands scattered roughly off the north-west coast of peninsula Malaysia at the point where the south Andaman Sea meets the Straits of Malacca. The main island of this group is also simply known as Langkawi and has been declared a UNESCO Geopark due to its natural habitat and a unique geology and biodiversity. 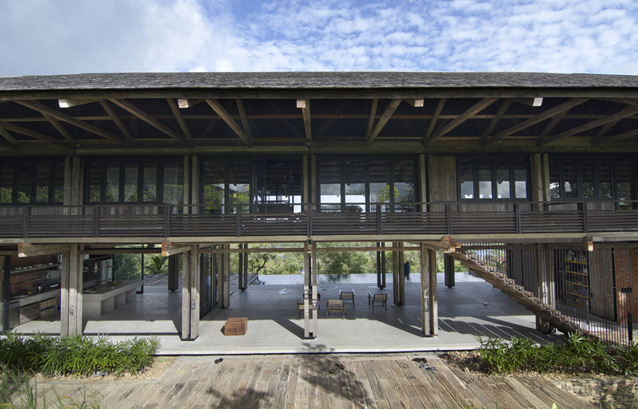 My first visit to Langkawi was on an architectural school trip in 1981, when the island had but a single bus, hardly any cars and no hotels. Getting to the island was via a slightly irregular ferry service (actually just a boat holding 50-60 people) from Kuala Kedah on the mainland. I have fond memories of walking the main street, which as little more than a metaled footpath, in the principal town of Kuah and not seeing a single car for miles.

Alas, in the ensuing almost three decades, Langkawi has been developed and today boasts modern concrete buildings, an international airport, numerous luxury marinas, a host of five-star hotels and resorts and a duty-free status to boot (meaning some of the products of contemporary Western living, such as cars and alcohol, are cheap and aplenty).

Fast forward to 2007 and we have Angela and Bob, a retired British couple, falling in love with the island. Bob’s previous career in advertising had enabled him to visit a number of exotic destinations around world over.

When I met the couple over tea recently, Bob explained how he had kept a checklist of all the places he had visited, to determine which one – come the day – would be the most suitable place to retire to. At the end of the exercise, Langkawi had the most number of ticked boxes.

Ironically, the partial development of Langkawi was somewhat of a plus to the couple. As Bob explained to me, “Although retired, I am occasionally called up by my ex-employer and other friends in the industry to help with difficult projects. Overseas travel is convenient with an international airport literally in our backyard… the modernisation of Langkawi is not all in vain.” 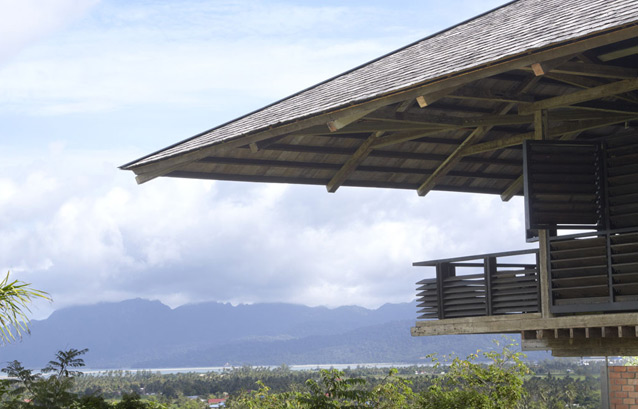 Apart from the obvious beauty of the landscape and the agreeable climate, another advantage as far as Angela and Bob were concerned was the Malaysia, My Second Home scheme. This government initiative not only encourages foreign retirees to move to Malaysia, but then also provides a support network and a number of incentives if you do so.

Through a mutual friend, the couple got in touch with Building Bloc, a young husband and wife architect team based in Kuala Lumpur, to design their dream home. The brief the client couple gave the designer couple was simple: “Give us a timber house.” 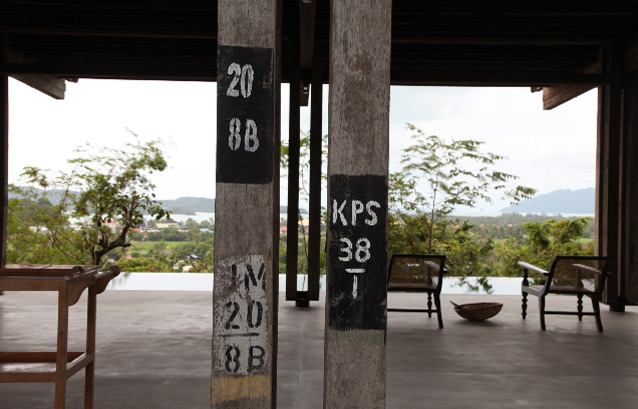 Wen Hsia and Boo Chung run a comparatively small practice, undertaking selected projects for discerning clients. When faced with the task of designing a timber house for Angela and Bob, they did not want to settle for just another timber house – it had to be different. Something that touches the soul; a home that not only provides shelter for its occupants but also respects nature and its resources.

When Hsia and Chung presented their unique idea of a timber house – one that made primarily of recycled electric poles – Angela and Bob listened. The idea seemed plausible – these timbers would be solid, hardy and well seasoned but not necessarily cheap. The next few meetings over the course of six months were spent fine-tuning the design and getting the budget sorted out. 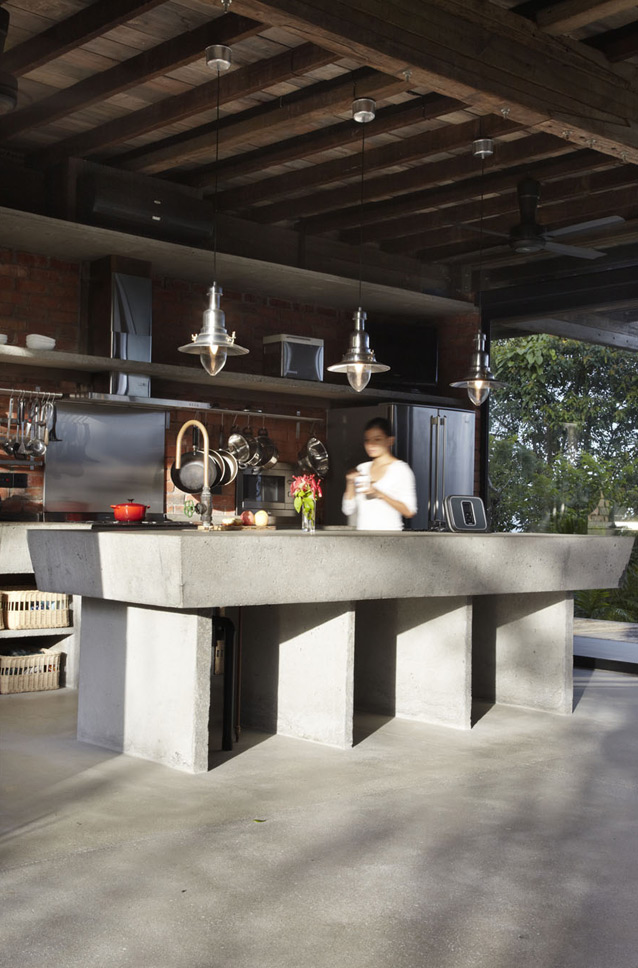 But major obstacles remained: finding suitable timbers for the house in the required quantity, as well as a knowledgeable and sensitive builder who could translate the design into its built form. Hsia and Chung accompanied the clients traversing three states to source the timber – literally the whole of northern peninsula Malaysia. Their search paid off when they located a timber yard in the town of Alor Setar, which had stockpiled a large quantity of these disused poles from the national power company.

Meanwhile, a number of builders were shortlisted and interviewed, some from as far away as Kuala Lumpur. The chosen builder, while not the cheapest, did have good credentials and also happened to be a local from the island. 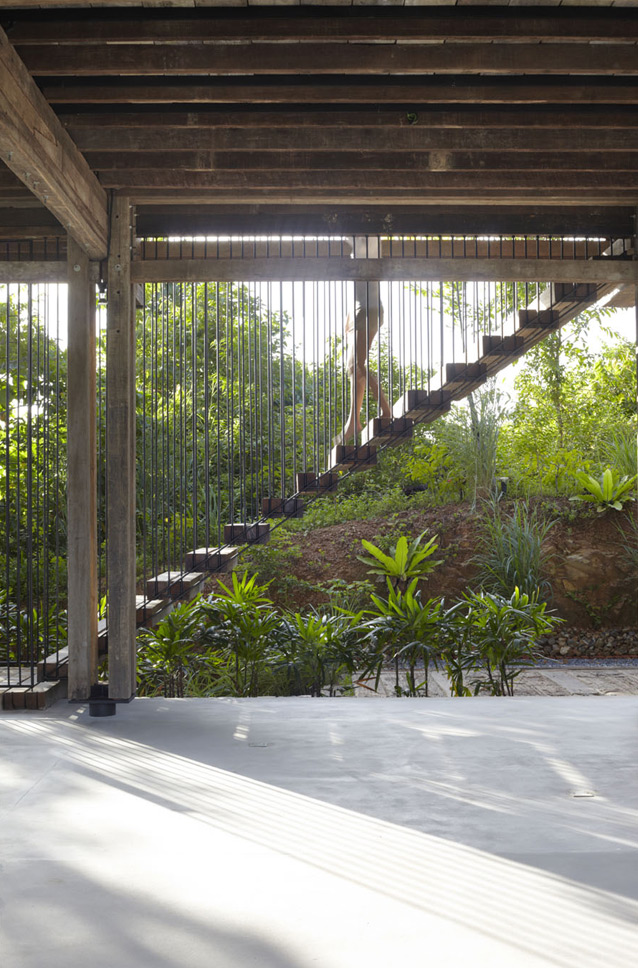 Thus began the construction of a unique house sitting atop a little hillock, surrounded by lush tropical greenery and kampong houses in the valley below. It took close to 18 months to complete, with monthly – and at times fortnightly – site meetings with the builders, often working out construction details on the spot. As time progressed, the architects and the clients felt lucky to have the builders’ experience, which contributed to the exercise and helped them in realising their design.

When I visited Angela and Bob recently, what struck me first was the tranquillity of the countryside surrounding the house. You drive through a narrow kampong road arriving at a gate that hints at something remarkable beyond. But nothing is visible, save for a narrow uphill driveway that disappears around the bend. 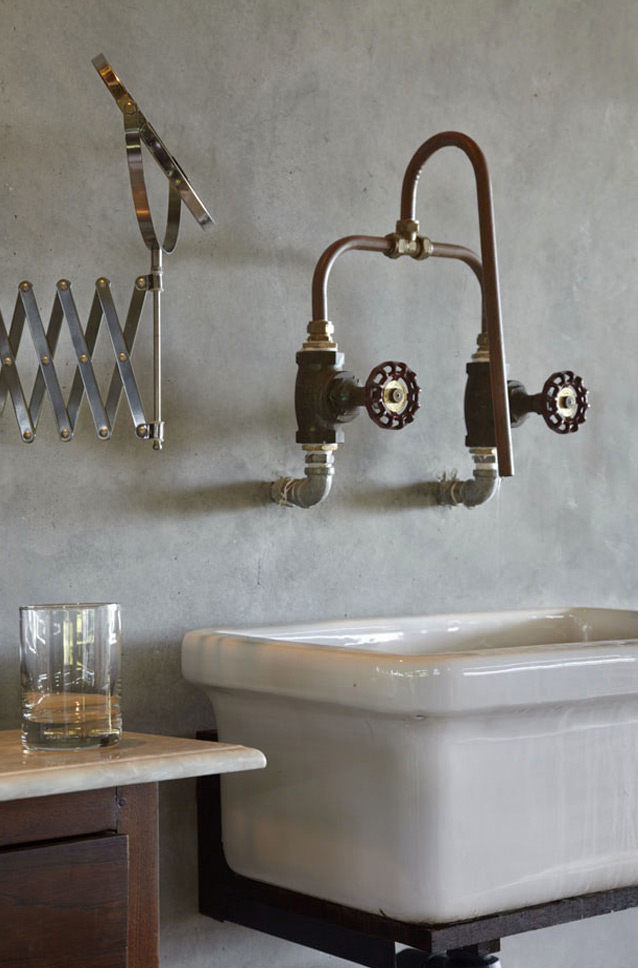 From the covered garage (upstairs is a reconstructed kampong house that now serves as Bob’s workshop), the house proper is reached via a set of steep steps made of poles leftover from building the house. And when you reach the top – level with the house – there’s another surprise: almost the entire house at grade level is completely open on the two long sides. One’s eye is drawn immediately to the breathtaking countryside that slopes steeply away from the house on the opposite side.

The living space is a large open area overlooking a pool that runs the full length of the house. On each side of the pool are deck areas, with the same timber poles echoing throughout the spaces.

The kitchen is the only area that has any modernity to it, with gas stoves, built-in ovens and other appliances. It even has an air-conditioner for those balmy afternoons, the only space in the entire house to do so. Apart from the mod-con fittings, this space too is simple, with fair-faced brick walls, concrete open shelves for storage and a concrete island worktop with period-style sink. Remnants of the residents’ native country are the custom designed taps – all the original brass stopcocks in the house were purchased from a junkyard in Great Britain. 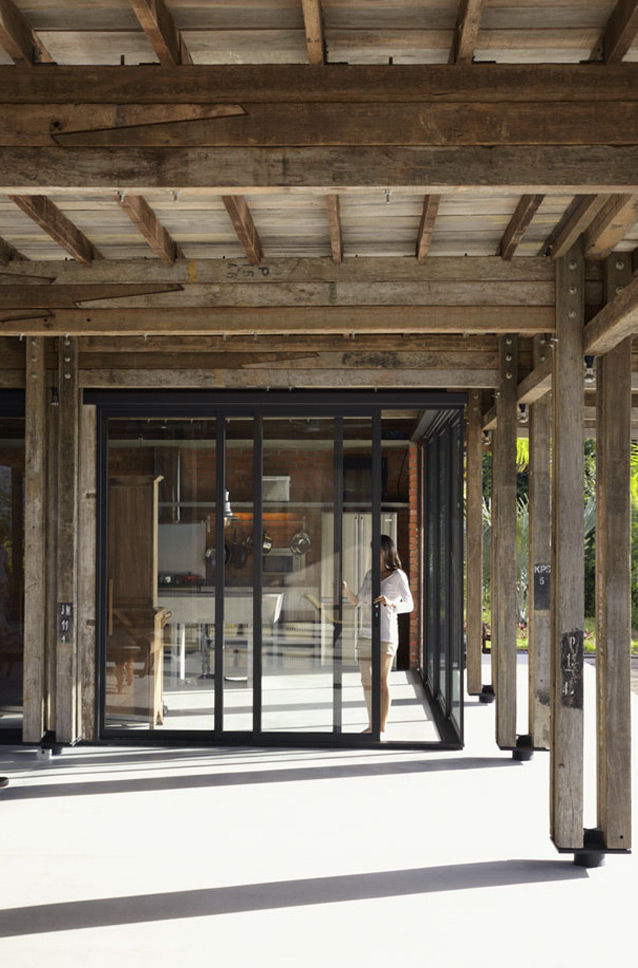 A single flight of stairs, again in the same timber poles, are suspended from the first floor using steel rods, leads to the upper floor. The entire upper floor has open balconies running the full length on the two long sides of the house.  One side overlooks the pool below and the countryside beyond, visible for miles on a clear sunny day.

The centre third of the floor acts as a family area and is simply furnished with an assortment of antique furniture and a beautiful raised divan as the centrepiece.

On either end are the sleeping quarters: one is occupied by the huge master bedroom, while on the opposite side, two smaller (but still spacious) rooms share the remaining third of the floor. Each bedroom has its own en-suite, located at the extreme ends of the floor.

None of these spaces have air-conditioning, but the open balconies in fact welcome in a constant breeze flowing from the lowlands, cooling the house comfortably even during hot days. Only simple ceiling mounted fans aid in circulating the air on still nights.

The architects took great pains to design unobtrusive insect netting to the upper walls, which is almost invisible from inside. Together with the timber louvres on the lower half of the walls and the operable casement glazing, the entire façade is able to breathe naturally. Similarly, the timber floorboards have been laid deliberately with gaps in between to allow air circulation between the floors. 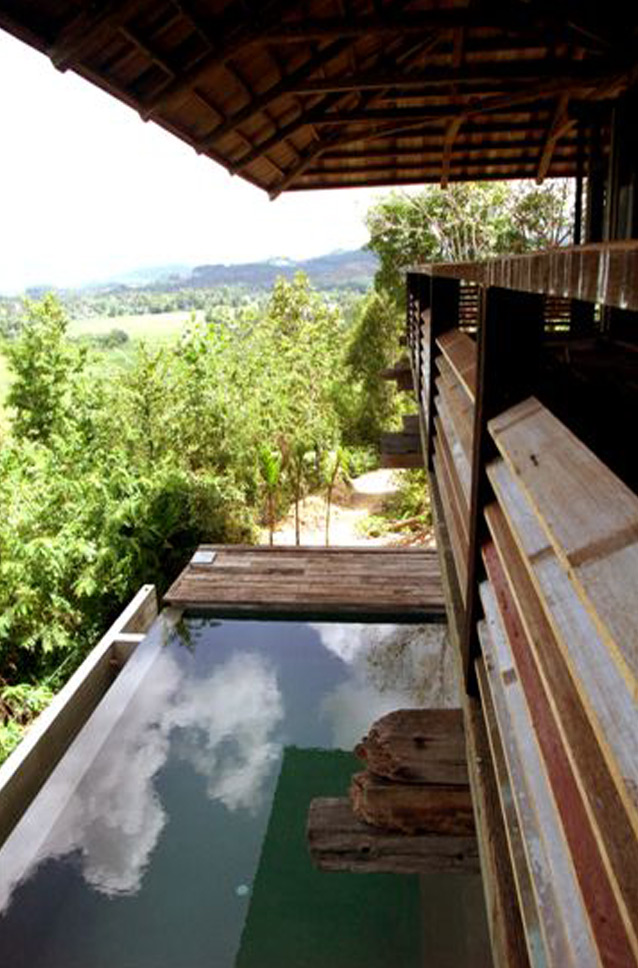 The expressive timber structure and underside of the roof, which are recycled Belian shingles sourced from a dismantled local hotel, maintains the simple and honest architectural aesthetic.

Downstairs, only the kitchen can be closed off using full-height glazed sliding doors, while the upper floor can be isolated at night by locking the staircase gate. Angela and Bob love the simple living concept and the quiet and safety of the locale poses no security problems to such an open house. “Locals are a friendly lot,” Angela and Bob explain, and have been following the building with interest, including the monkeys that reside in trees on the neighbouring hillside.

This project was very much a collaborative process where residents, architects, builder and engineer went on an enlightening journey together over a period of time. Something as intimate as a home always inspires an array of human connections – here, these was first brought to life in the working relationships, and then the friendships, between the people involved in its creation. “We had just envisaged a little timber house, maybe something vernacular,” the couple remark. “This synthesis of ideas, concepts and technologies and take on the green revolution… is a pleasant surprise.” 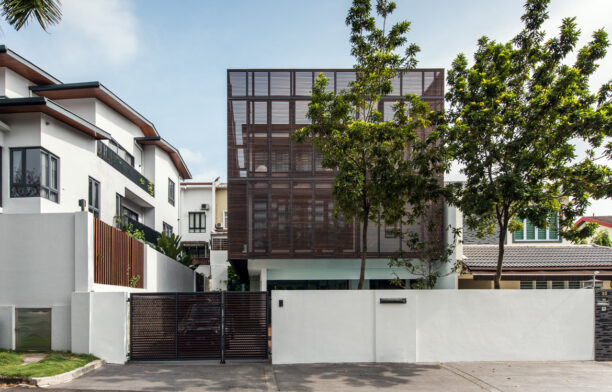 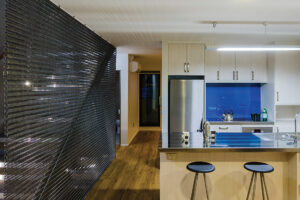