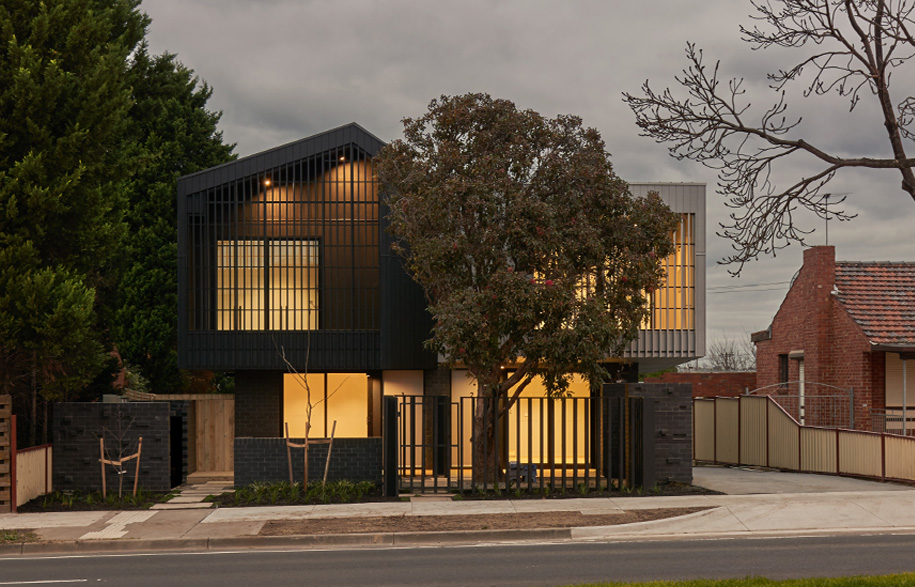 Architecture firm DKO teamed up with property developer Milieu to create a series of townhouses in Melbourne’s Preston with the aim of creating boutique architecturally designed homes for the growing suburb.

The newest collection of townhouses on Albert Street in Melbourne’s Preston was designed with the intent to build on the suburb’s status as a flourishing hub coming into its own within the city. Seeking the opportunity to add something inherently ‘Melbourne’ to the suburb’s streetscape, boutique property developer Milieu worked in collaboration with DKO Architecture and DKO’s development sister, Open Field to turn their vision into a reality.

“Albert Street is a new suburban typology that respects the history and culture of the Melbourne suburb while seeking to offer an alternative and new way of living,” says Jesse Linardi, Design Director of DKO.

The facade of the eight architecturally designed homes is a playfully modern take on the classic Melbourne townhouse with generous and sun-drenched interiors to match. Four townhouses and four apartments were developed, with all residences having immediate access to the park through a central walkway.

For Milieu, Preston is, “popular with young families and the artistic community – and the word is out about Preston’s abundance of retail, entertainment, recreation and education options. Bordered to the east by Darebin Creek and home to one of Melbourne’s best fresh food and produce markets, Preston is enlivened by its rich cultural heritage, diverse population and myriad of public transport options.”

In terms of the interiors, a sleek, minimal palette was used, with a careful use of natural materials. Blonde timber floors are contrasted against stainless steel Ilve appliances and white cabinetry and walls, lending the residences an expansive feel. For both DKO and Milieu, there was a heavy focus during the design process on ensuring that the living spaces were sophisticated and livable – perfect for young families to grow in.

“Albert Street reflects our commitment to considered design, through the creation of attainable homes for Preston, and for those who appreciate fine architecture,” says Michael McCormack, Founder and Director at Milieu Property.

How to Make the Most of a Small Footprint