The Making of Parison Pendant .. 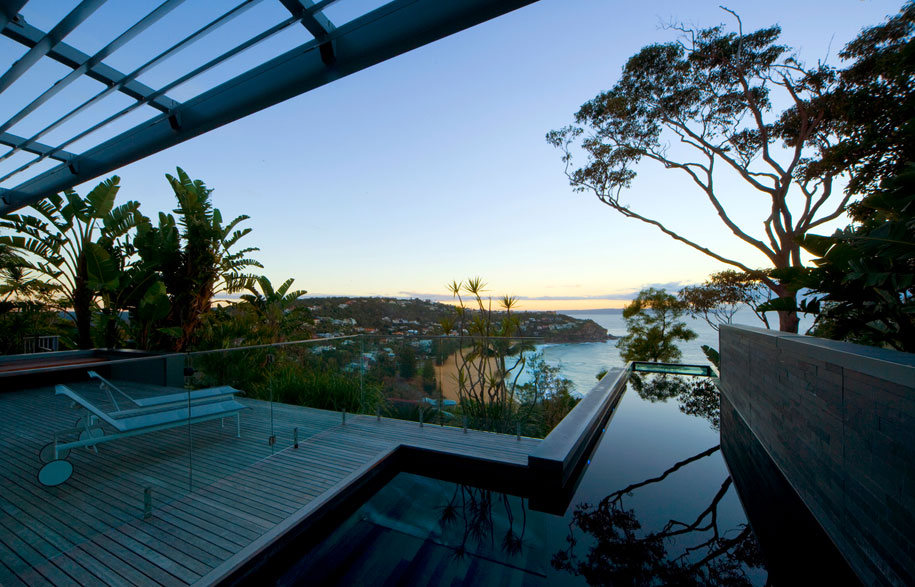 The owners of this house at Sydney’s Whale Beach wanted a house they could “hose down” – in keeping with the great Australian beach tradition. Heather Barton visited this house by architects, Cullen Feng, which enjoys sublime views down to one of Sydney’s finest beaches and north along the coastline.

Although there is no dominant architectural style in the Whale Beach area, there is a loose tradition of organic modernism, taking material cues from James Barnet’s local sandstone, colonial architecture, in the mid-20th Century designs of Jolly, Burley Griffith and Ruskin Rowe that pepper the Barrenjoey Pennisula.

More recently, Alex Popov, Tonkin Zulaikha Greer and Stutchbury Pape have made monumental marks in the area, once occupied by the indigenous people of the Guringai language group, before they were decimated by smallpox and measles in 1790.

The area now defined as Whale Beach is a pocket of land popular with those prominent in business and particularly the arts, including film directors George Miller and Peter Weir, actors Bryan Brown and Rachel Ward, author Thomas Keneally and opera singer, Joan Sutherland, but was once part of Father John Joseph Therry’s 1837 land grant.

The Jesuit order sold the land after Therry’s death to finance the construction of a new Catholic cathedral in Sydney, replacing the original razed by fire.

Cullen and Feng’s contribution to Whale Beach is executed on a trapezoidal-shaped site, accessed from the rear via a private road and falls away to the north approximately 11 metres. They have avoided intruding on the landscape by making the house, which lies in a foreshore scenic protection area, barely visible from the beach.

In keeping with the tradition of the beach-shack, this house harbours a concept of habitability, but within the grander modernist proportions of the three, overlapping, off-set rectangular pavilions, displaced diagonally down a hillside with a unifying staircase holding a straight line through the section.

This generates a rich source of formal interest, enhanced by material selection, to accentuate each part of the composition. A Colorbond parapet and end-wall cappings form a series of continuous rectilinear ribbons around the whole composition, stepping down the site and taking advantage of the exhilarating views via the northern aspect over Whale Beach.

In reference to Peter Zumthor’s Heideggerean experiential, sensory architecture, Jon Cullen and Michelle Feng have created a pronounced liveability by a staged set of experiences achieved through clever framing strategies, heightened by sensitivity to materials.

Feng comments that “The views from the site are so spectacular, they needed to be framed so their impact would not be experienced all at once.”

The façade, therefore, gives no hint of what lies beyond. Once inside the entry vestibule, a rectangular aperture at eye-height creates a snapshot of the ocean view. Designed as a contemplative antechamber, the vestibule gives pause upon arrival – relief from the traffic and intensity of the trip to the house and an invitation to the peaceful retreat below.

On departure, the frameless skylight leaves an after-image of the relationship of the house to the splendour of its setting.

Similarly, on descending the stair – deliberately compressed by the full-height travertine walls and illuminated naturally from above – the view opens up and retreats over the three-level journey.

Each level is oriented to the view, with the widest possible shaded northern elevation opening out to external living decks. The southern side of each elevation is partially buried into the hill, housing services, rainwater tanks and garage space. Slits and hooded windows to the side create vignettes of the natural setting, while the forecourt frames a space open to the sky between house and garage.

“The house is externally dignified and reserved and purposely low-profile,” says Cullen. “It relies on a series of rich formal and spatial experiences to create effect rather than epic exterior monumentalism. We’ve inverted the concept of monumentalism to achieve it through materials such as the use of travertine in the soaring stairs and atrium walls used in the interior.”

The plan responds to the steep topography by growing out of the site with solid and private rear and side walls, while the north face of the house has a lighter filigree treatment of glazing and louvres that open onto a series of decks formed by the roofs of the levels below.

“Embedding the house into the hill, stepping it over three levels and using the rooves of the lower levels as large northern living decks captured the site’s topography and climate potential,” says Cullen. “The flat metal rooves support pool solar heating tubes as well as solar collectors for hot water. The majority also drain by gravity into the rainwater tank. And the east wall of the pool is finished in a charcoal slate material, which works like a heat sink to give passive solar heating for the pool water.”

The site is also fortunate in having a northern aspect and being just below the top of the ridge behind, so it offers a magnificent solar aspect in sync with the direction of view and the sea breeze while being sheltered from the colder and more viscous southerlies particular to the area.