Celebrating The Year Of The Do.. 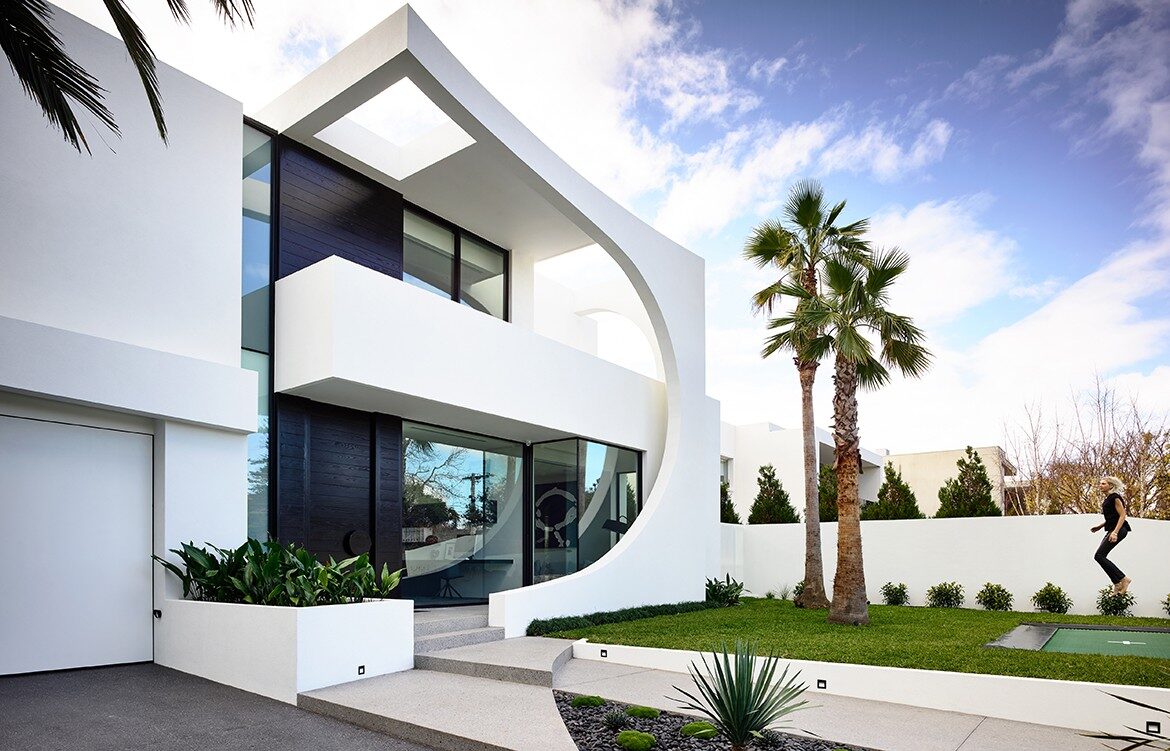 Cutting a fine, sinuous figure in Melbourne’s leafy Brighton, Martin Friedrich Architects creates a home full of fun and impact, with ample space for an active family of five.

Residences run the full gamut of architectural styles in the tree-lined avenues of well-to-do Brighton. Grand old heritage mansions on one hand; stark, box-like contemporary builds on the other.

With soaring white curves and a striking façade, Playful House certainly distinguishes itself from its neighbours. And beyond the grand gestures at the exterior, its finer details make for a thoughtful design specifically tailored to its inhabitants.

When the clients purchased the property 11 years ago it was a classic fixer-upper, built in the 1930s and reworked, badly, in the ’80s. “The place was definitely worse for wear,” says one of the residents, Jessica. “We knew we needed to renovate as soon as possible.”

Impressed by Martin Friedrich Architects’ previous residential work in the local area, Jessica and her husband Chris approached the practice for what was initially planned as a fairly conservative renovation. But with the original structure in poor condition, it became clear that a complete overhaul was necessary – serendipitously providing the architects with something of a dream brief.

“It’s what I’ve always wanted to do – a really creative house made of beautiful flowing lines,” says Martin Friedrich. “And we were fortunate enough to be able to do that here.”

Set back from the street, Playful House’s exterior is comprised of layers of intersecting, sweeping surfaces and planes. Its sculptural shell is carved out to strategically reveal and obscure spaces within. Behind the front door, two internal masses converge – an open foyer separates the wonderfully articulated curling staircase to the left, and a plush sitting room to the right. Diffused through sheer fabric curtains, the light in this area streams in through flight windows which continue all the way up to the parapet – a signature detail for Martin Friedrich Architects. 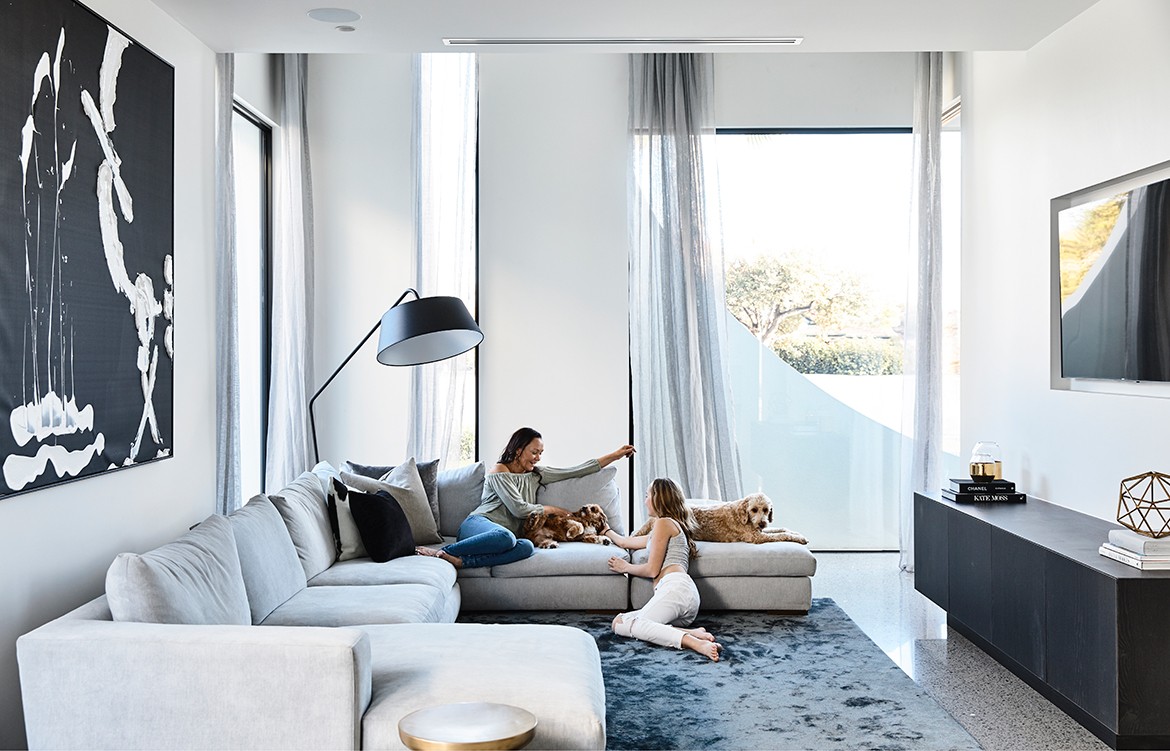 The foyer space vaults upwards, its double-height volume accentuated by a towering bronze mirror installation along the wall greeting the front door. This indisputably glamorous feature is so long, it had to be installed flat on site and craned into place,
its delicate pieces held together by a robust steel frame. At its base sits the treasured family grand piano, previously owned by Jessica’s father and shipped to Melbourne from her mother in the U.K.

In keeping with the soft shapes and curves in the undulating walls at Playful House, circles and spheres are a key motif reflected in the family’s art, purchased for the new home, as well as in the form of glass bubble pendant lighting used throughout.

Through to the kitchen, the bronze mirror from the foyer is picked up again in a luxe splashback. A strip window to the outdoor BBQ cooking area continues the height of the room and runs overhead, creating an unobstructed view to the sky. This technique is also employed upstairs in bathrooms, mirrored to make limited spaces seem larger. White door panels which provide the option of privacy from the entrance are discreetly tucked away when open, recessed into the wall to enable maximum flow throughout the sociable ground floor.

“I’m English, and we don’t have a lot of open plan in the U.K.” says Jessica, “so I really wanted to have that feeling of spaciousness here, to be able to stand in the kitchen and see everything in our yard outside.” A covered outdoor dining area adjacent joins the internal living space and promotes interaction back and forth.

“We conceived Playful House as being a fun place for everyone, so the backyard has distinctly different spaces for people to go to while maintaining sightlines and connection to each other,” explains Martin.

One quality that defines the house is the builders’ seamless workmanship visible at every turn. A sliding door track that transitions from indoors into the backyard is perfectly level underfoot, the Corian benchtop outdoors extends flush to the house. Martin is particularly proud of the sharp angles and curves expertly rendered by Matt Trihey and the team at 1186 Builders.

“Martin just gets so excited about the detailing, which is great for us as his clients. He’s very particular and he wanted this home to be perfect,” says Jessica. “Both he and the builder have done an amazing job. They went above and beyond.” 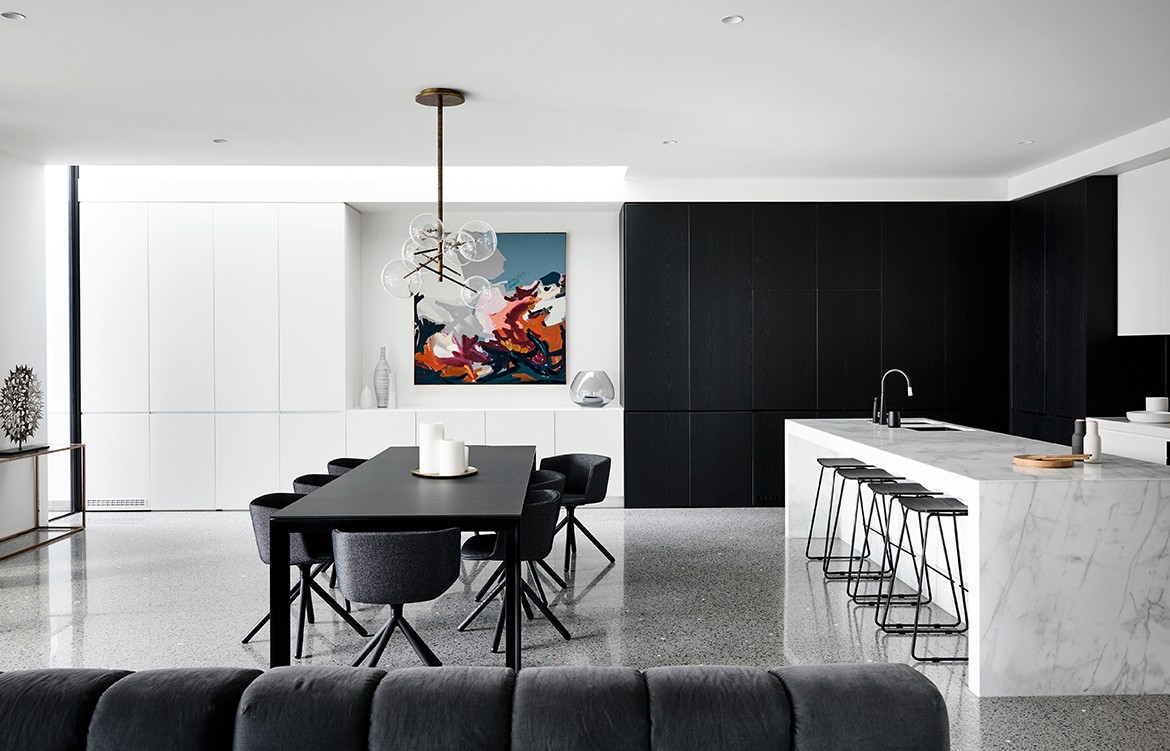 Unlike other new homes in the area, designed for adults and their tastes, Playful House is purpose-built for the enjoyment of its younger inhabitants. Parents to three sports-mad children – two boys aged 14 and 10, and a 12-year-old girl – the clients were keen to incorporate their interests into the design.

“My kids come first, and I wanted to make this a house where they would still want to be when they’re teenagers,” says Jessica.

Enviable in-house facilities include a sizeable pool and spa, besides which sits the uniquely formed pool house. Complete with a hidden television which descends from the ceiling overhead, the pool house has become the ideal teen hang out. The boys are particularly fond of the basketball court and cricket strip, while the couple’s daughter made a special request for the in-built trampoline on the front lawn, as a space to relax with her girlfriends.

“You wouldn’t think so, but the trampoline actually gets used every day. The kids hop around on it before we get in the car for school!” Jessica says.

Though Playful House is indeed a showstopper, it is far from being just a showpiece. Its gentle curves, considered spaces, and social atmosphere combine to achieve the genuine warmth of a family home. Impeccably composed, yet ever ready for hands-on play.

In one of the two vertiginous mature palm trees at the front of the property, a stuffed toy monkey nestled amongst its leaves, thrown there by one of the children. “That’s what this family is all about!” Martin says, in response to the stray creature. “They’re just a fun-loving bunch.” 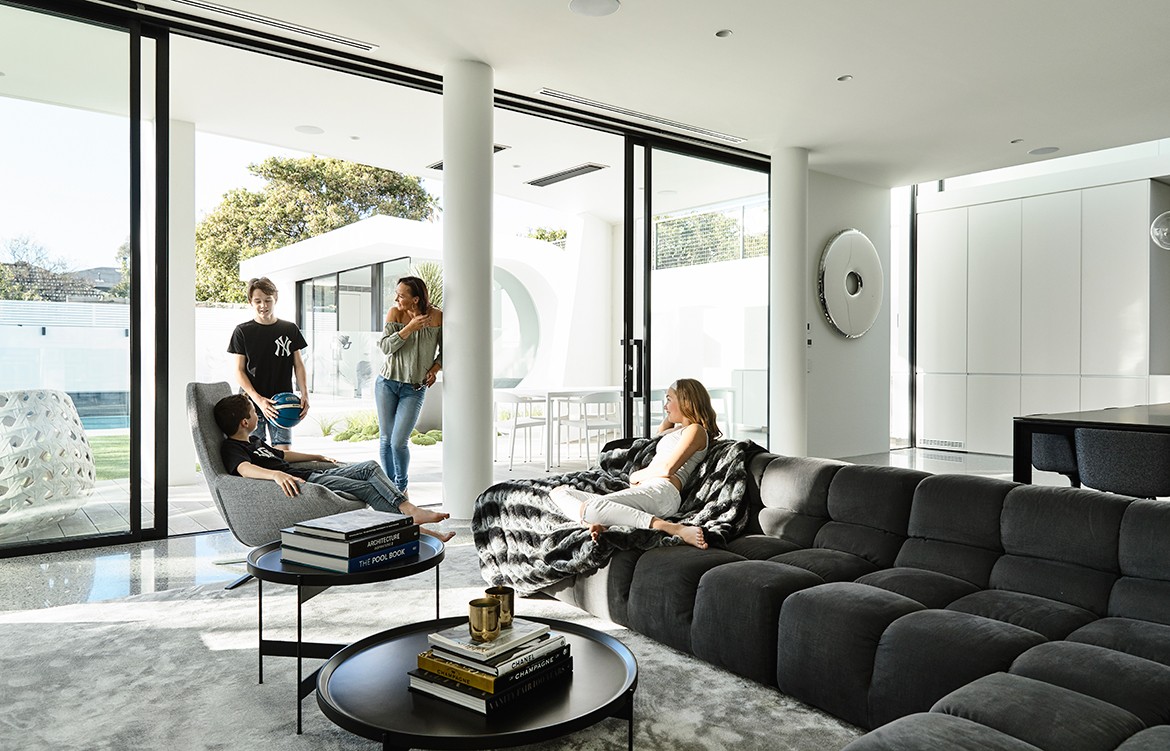 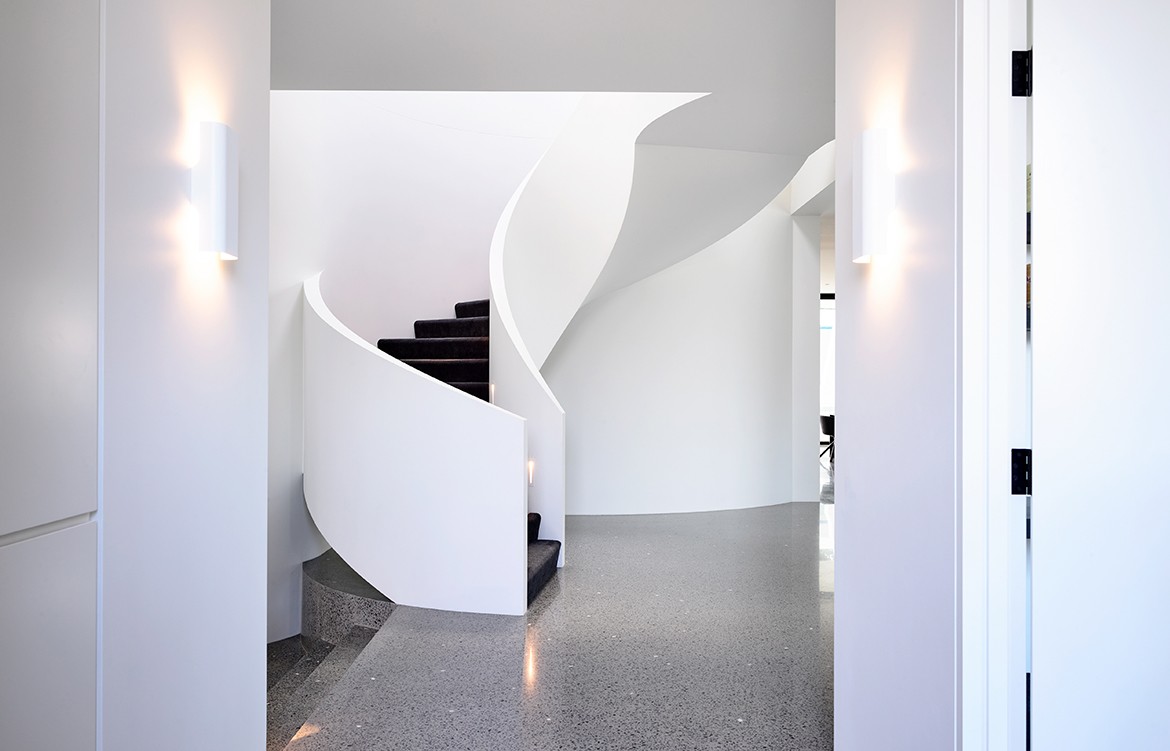 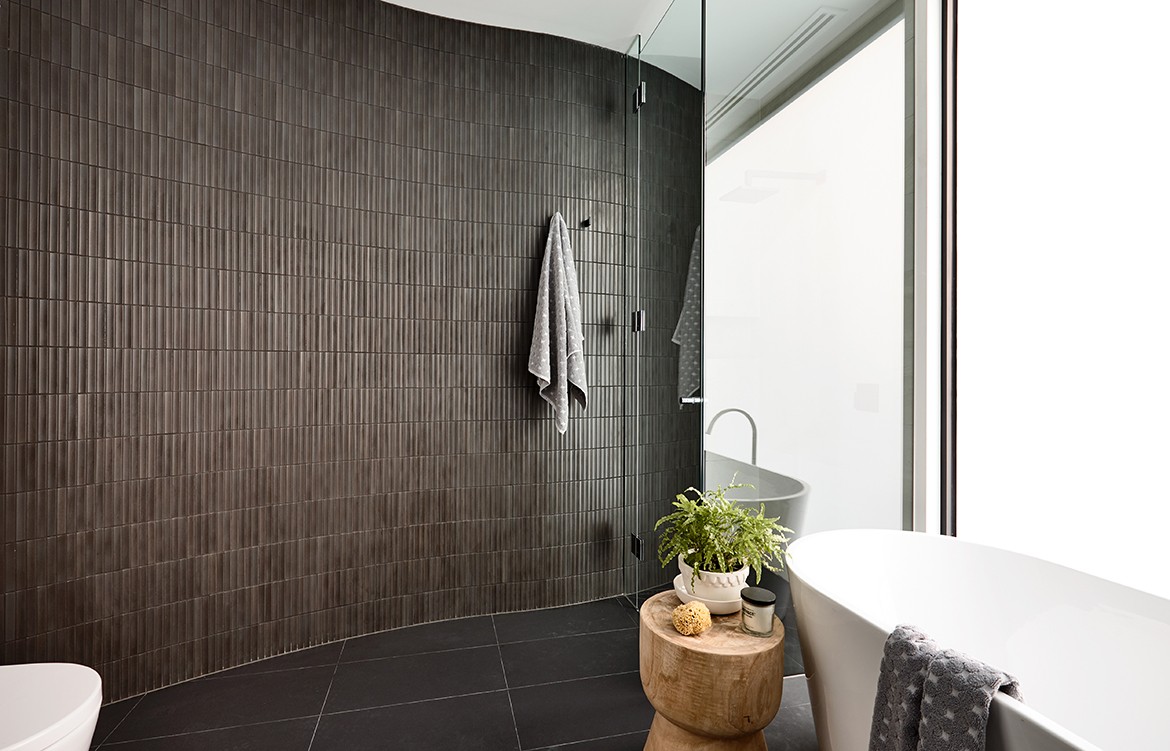 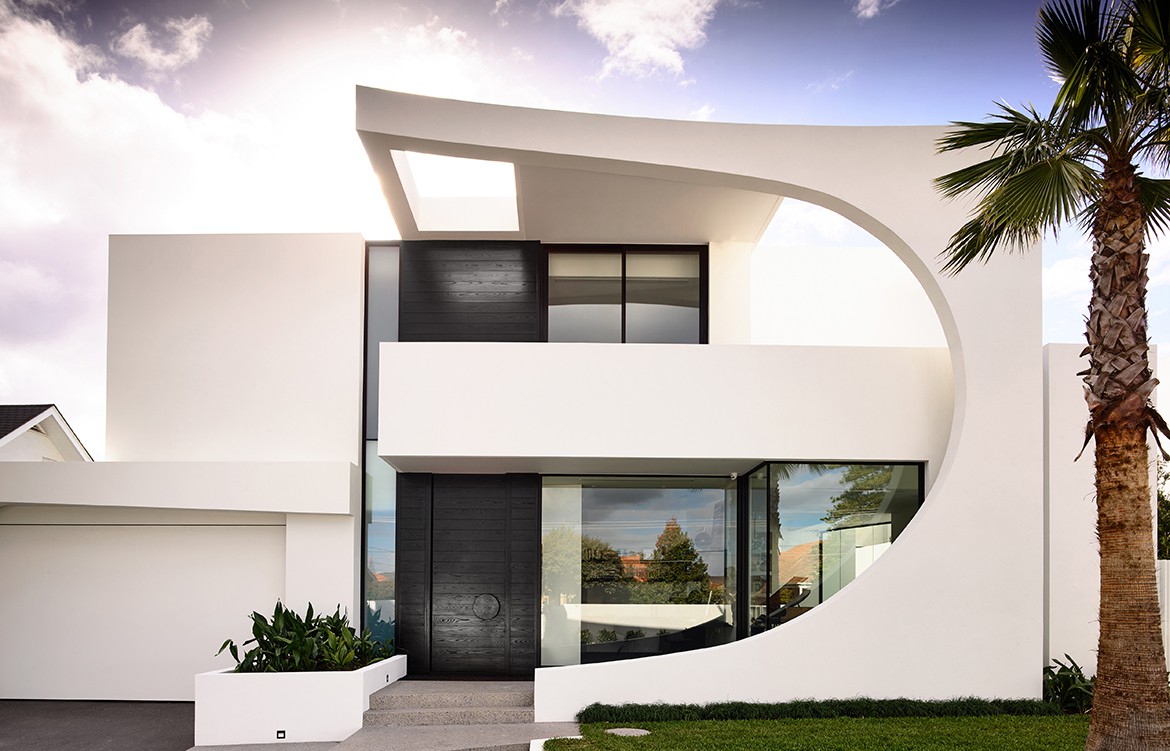 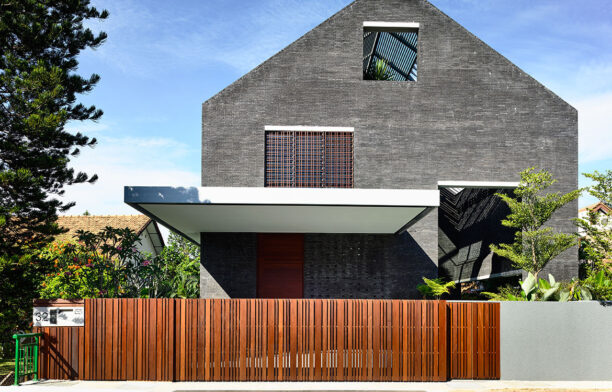 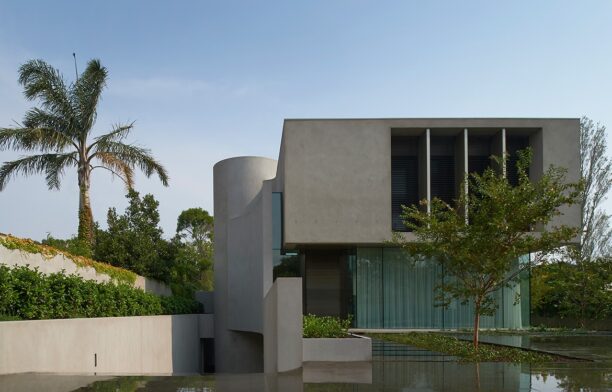 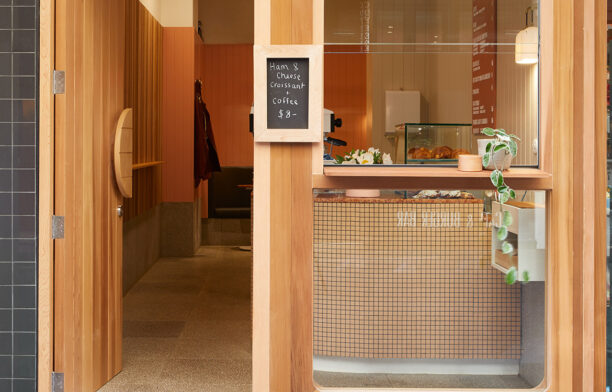 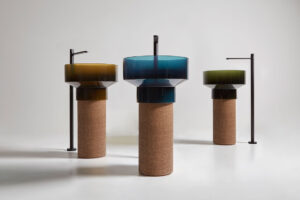