Indoor Outdoor Spaces At One W.. 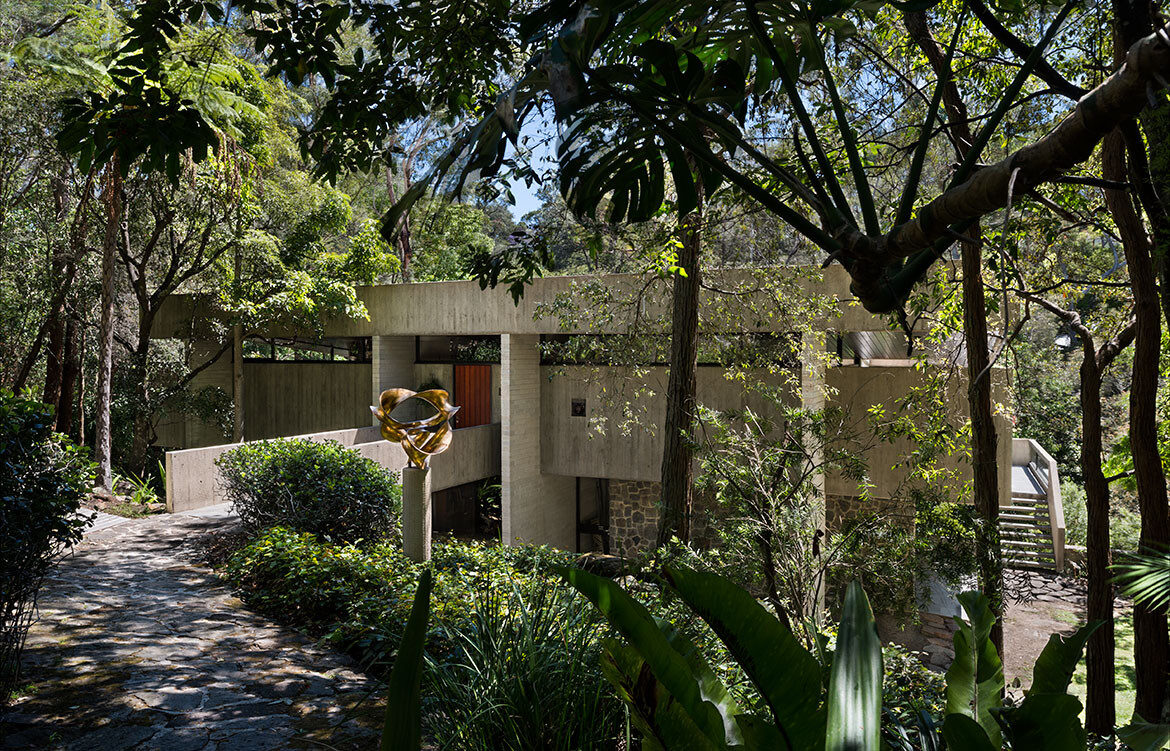 A child of the left wing intelligentsia, Penelope Seidler was never just the wife of one of Australia’s most notable architects. We visit her at the home she and Harry designed.

Penelope Seidler is not the kind of great woman to have ever stood behind a great man. Throughout their almost five decades of married life, the architect and noted patron of the arts stood firmly beside her husband – the feisty Austrian-born modernist, Harry Seidler.

Penelope was 18 and studying at the University of Sydney when she met the celebrated young architect in 1957. They married in December 1958. Seidler was thirty-five. “I had no idea what I wanted to do with my life but when I married Harry I knew I didn’t want to just be an architect’s wife,” she says today, at home in the cool concrete interior of the house the couple designed at Killara, on Sydney’s north shore. “All he and his friends talked about was architecture. So I switched to architecture in order to enter Harry’s world on an equal footing. I graduated five years later.”

By that time the young couple were living in the penthouse of the 10-storey Elizabeth Bay apartment building Seidler had delivered in 1960. The Ithaca Gardens block is a stoic, sandy brick oblong dissected by an expressed concrete grid. Perfectly oriented north for solar exposure and impeccable harbour views, it is washed by the breezes sweeping up the hill from Beare Park. But the pair wanted to expand their horizons – professionally as well as personally – to design a house together that could become their forever home.

By the time their first child was a toddler they decided to scout around for a block of land on which to build their family residence.

“I said I’d go as far as Killara,” Penelope remembers. “Having grown up in Wahroonga I wasn’t keen to settle too far away from the city again.” Fourteen kilometres north of Sydney on the edges of the Ku-ring-gai Chase National Park, Killara was established when the railway opened there in 1899. It was planned as “a gentleman’s suburb” of expansive mansions and sparse commerce. At Wahroonga, a 25-minute drive further north along the A3, is still to be found the heritage-listed childhood home of Penelope Seidler née Evatt, a palatial, red brick and colonnaded Georgian Revival manor designed by architect Stuart Traill and built in 1940.

Wahroonga is also, curiously enough, the site of Harry Seidler’s first Australian project, the commission that brought him from Oscar Niemeyer’s Rio office to our shores: the private house for his family, today known as Rose Seidler House, completed a decade before the couple met.

Penelope Evatt was born into a well-to-do political family of liberal convictions. Her father, the Hon. Clive Evatt QC was a Labor minister during World War II when Penelope was a young child. His elder brother Dr H.V. Evatt was Attorney General then Minister for External Affairs throughout the 1940s. (He was also widely rumoured to be the first Australian to own a Modigliani.)

“It was a very tumultuous time and my father and uncle were often in the news which didn’t go down so well at Pymble Ladies’ College,” remembers Penelope. “I was probably the only girl there from a left-leaning family. I felt very under siege.”

While her two siblings followed their father into law, and he would have had her do the same, Penelope had a penchant for culture and yearned to become involved in the visual arts. Except that visual art was not yet a certified subject for study at the time, ineligible as a matriculation merit.

“It was a drop-out subject.”

At the University of Sydney she enrolled to study philosophy, history, anthropology – the liberal arts – but as luck would have it other students of her age included Robert Hughes and Clive James who would become fast friends. “We were all just one big happy family and I was having a wonderful time!” Not long after graduating, James moved to London to establish himself as one of the greatest TV presenters of his generation and Hughes soon followed to launch his career as an international art critic and cultural historian.

But by then, Penelope had met Harry. “He was older, and so sure of what he wanted to do, unlike all these other layabouts I’d been used to,” she laughs. “He’d still not decided to stay in Australia and he did threaten to leave from time to time. But after he did his first house for his family he’d become quite famous and was getting other commissions and that’s why he stayed.”

The Killara House, essentially four volumes – or half-floors – suspended around a void, is composed of reinforced concrete, basalt, timber, white concrete blocks and quartzite. A more definite commitment to the long term is difficult to imagine. By coincidence, ‘killara’ is an Aboriginal word meaning ‘permanent’ or ‘always there’.

Approached by a concrete entry bridge, the kitchen, dining area and library are on the top level; the living space and main bedroom beneath. The third level was originally a dedicated children’s wing – what was formerly known as the playroom is the only volume with direct access to the lush native garden. Today it is an ancillary sitting room, overseen by a monumental Frank Stella painting. The lowest floor contains a studio, guest suite and service room. “I live mostly on the upper two levels these days,” notes Penelope. “It may seem silly for a single person to occupy such an immense house on their own, but this was and always will be my home.”

Bauhaus-inspired but resolutely Australian, it is embedded in the middle of its steep, sloping site above a creek, as if part of the tectonic plate itself. “In fact, I sometimes think it would look quite silly anywhere else,” says its coauthor.

Harry & Penelope Seidler House was awarded the Australian Institute of Architects’ Wilkinson Award the year it was completed, in 1967. A brass plaque sits at the front door to this day.

As director of Harry Seidler & Associates, Penelope spends most weekdays at the Milsons Point Offices & Apartment building of 1973. Her city residence is in the Cove Apartments in The Rocks (completed in 2004), the last residential building Seidler completed in Sydney – two years before his death from septicemia following a stroke, in 2006.

It’s from here Madame Seidler sets out almost every evening to some cultural event or society dinner, seemingly indefatigable. She sits on the boards of the Biennale of Sydney, the National Gallery of Australia Foundation and the Institute of Architects Foundation. Since 1973 she has been a member of the International Council of the Museum of Modern Art in New York, and in 2011 was made a Chevalier of the Légion d’Honneur of France.

“Penelope Seidler is inspiring for the fact that she has always taken the initiative to educate herself,” says architect and academic Melonie Bayl-Smith. “She has never sat back and waited for the world to reveal itself to her. As an architect she’s shown a way of being outside the practice and that in turn nourishes those around her.”

Penelope Seidler is a great woman – une grande dame – indeed. To see her enter a room is to watch her cut a fine swathe; people make way for her not because she demands deference but because she inspires respect. She’s part of what I like to think of as the Strapping Generation, that breed of unabashed cultural actors like her classmates Clive James and Robert Hughes, like Gough Whitlam, Germaine Greer, Patrick White; big characters with bold ideas unafraid to air them. Iconoclasts more than icons, a very Australian rabble, butterflies of the mind.