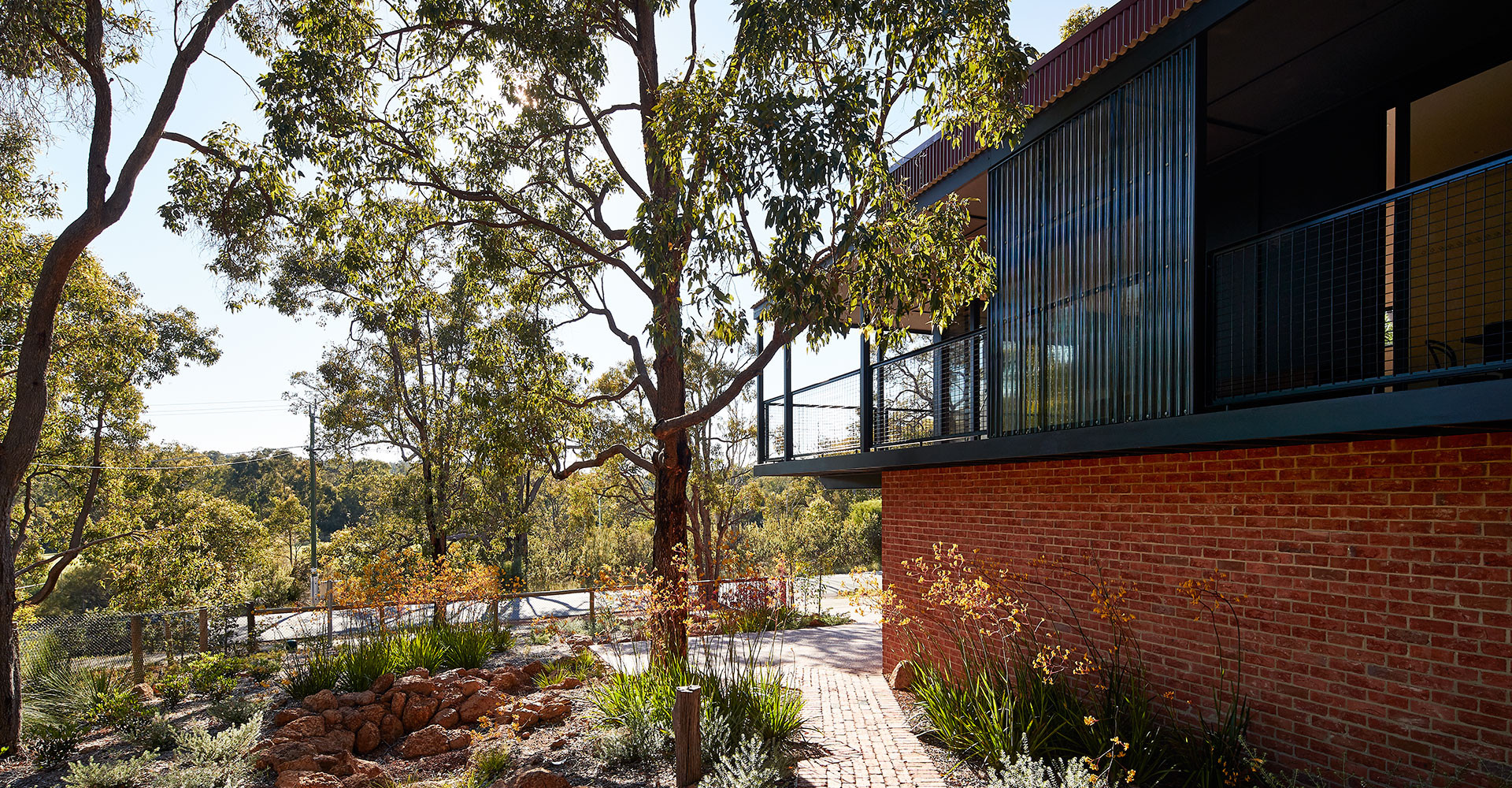 For just over a century, this one-room church was the gathering place for a small community. iredale pedersen hook architects turned it into the heart of a family’s life.

When a family of four bought a de-consecrated church in Glen Forrest, a small timber town just 30 kilometres east of Perth, they weren’t sure how to make it a home. “It would have been cheaper and easier to buy a regular house in Perth, but I saw this as a possibility to do something really beautiful,” says the owner. The couple has long ties to the area and were scouting for a house block when they discovered the 1903 heritage-listed former church was for sale. “My husband has been visiting Glen Forrest to ride mountain bikes for 30 years, and when we first visited the church, we just fell in love with it,” she says. They engaged architect Adrian Iredale of iredale pedersen hook to guide them on a journey that would take ten years.

The couple had a modest budget, adding to the challenge for the architect. Adrian was acutely aware that his design solution had to combine a contemporary family home with respectful re-use of the church, which had an “emotionally and culturally loaded” position in the local community. 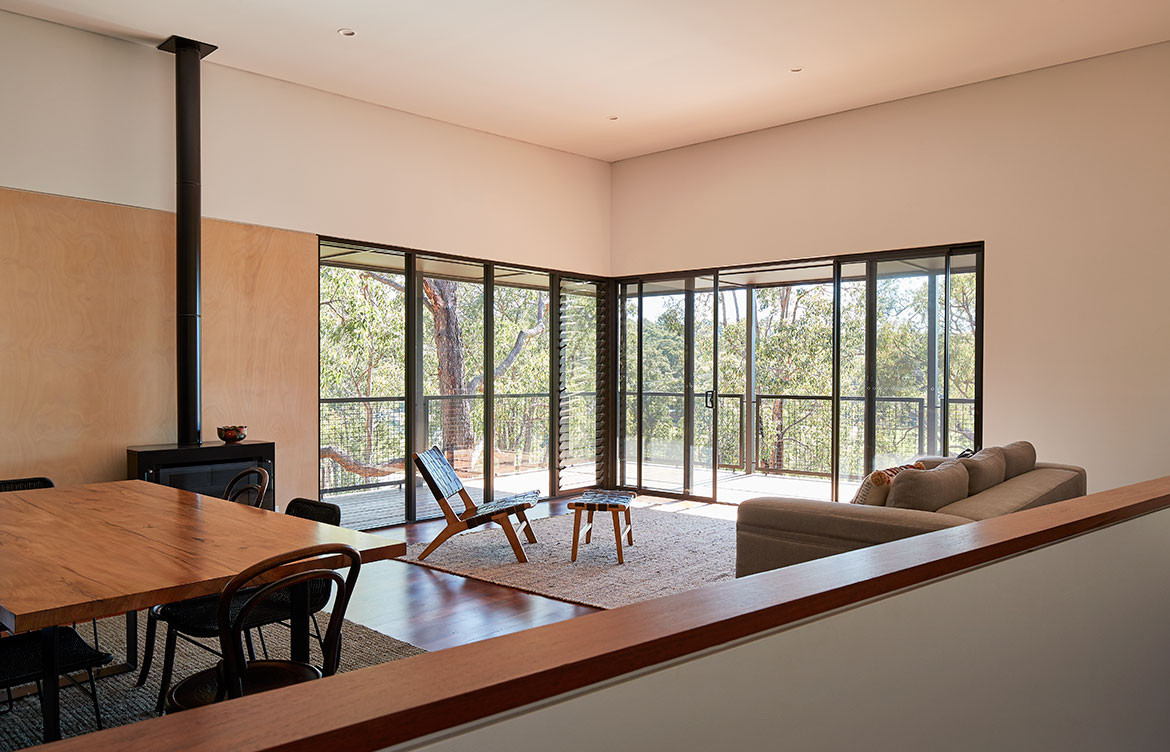 From the outset, they envisaged the church as a stand-alone entity. To preserve its appearance from the road, Adrian located the new house near the front of the block, along the southern boundary. That necessarily narrowed the building envelope, but he still managed to create spacious interiors, elevated in the tree canopy and boasting generous outlooks across borrowed landscapes.

The arrangement of buildings on the sloping site, and the meandering native garden that cascades down the hill towards the road helps to frame the original structure in an unexpected way. “We envisaged three elements on the site: the church, the gazebo dating from the 1980s which gives definition to the courtyard, and the new house,” says Adrian Iredale. “By binding these three pieces together, they all become significant and the arrangement increased the value and presence of the church.”

Just as the church brought people together for more than 100 years, the owners viewed it as a social gathering space for their family. “We didn’t want visceral experiences in the church,” the owner says. “It had been a sacred space, so we wanted it to remain a separate place for family time, music and art.”

The profane aspects of daily life are confined to the house, and the church was left in almost its original state. The original Jarrah floors remain, as does the raised altar platform. At the eastern end, a long desk hosts painting and craft activities, while the central area provides space for playing games and relaxing with a book.

Adrian deliberately preserved the main axes inside the church – established by windows at each end and in the side walls, and the symmetrical entry and exit doors. “We installed the fireplace opposite the basin and the new skylights in the roof in keeping with those existing axes, and kept the altar space free.”

The east-west axis plays an important role in daily life, with the family following the course of the sun throughout the day. “We wake up and have breakfast and enjoy sunny mornings in the main living space, and then move to the western part of the site in the afternoons and evenings, when we tend to spend time in the garden, the courtyard and church,” the owner says. “In winter, it’s lovely in the church, with the slow-combustion heater going.”

In keeping with the church’s character, Adrian constructed the new house with a rustic brick base, red steel cladding, and blackened timber detailing along the verandah, which helps the building recede into the surrounding treescape.
He collaborated closely with builder Vince Daly, whom he’s worked with many times before, to bring down construction costs to about $1,600 per sqaure metre, well below the cost of an architect-designed home.

But, like the building itself, which appears smaller from the street than its interiors suggest – and the church, whose imposing façade belies its diminutive footprint – that budget figure is deceptive. The spaces transcend expectations thanks to lofty ceilings and carefully placed windows and doors that connect with near and distant views, nature and sky.
There are plenty of architectural ideas to be discovered throughout, including the screens along the verandah’s edge that both filter and distort the view as one moves along the processional aisle to the cantilevered endpoint; the carefully positioned skylights above the main bed that allow nighttime stargazing; and the way the verandah roof reverently wraps up and over the church porch, enveloping but not touching the historic building. 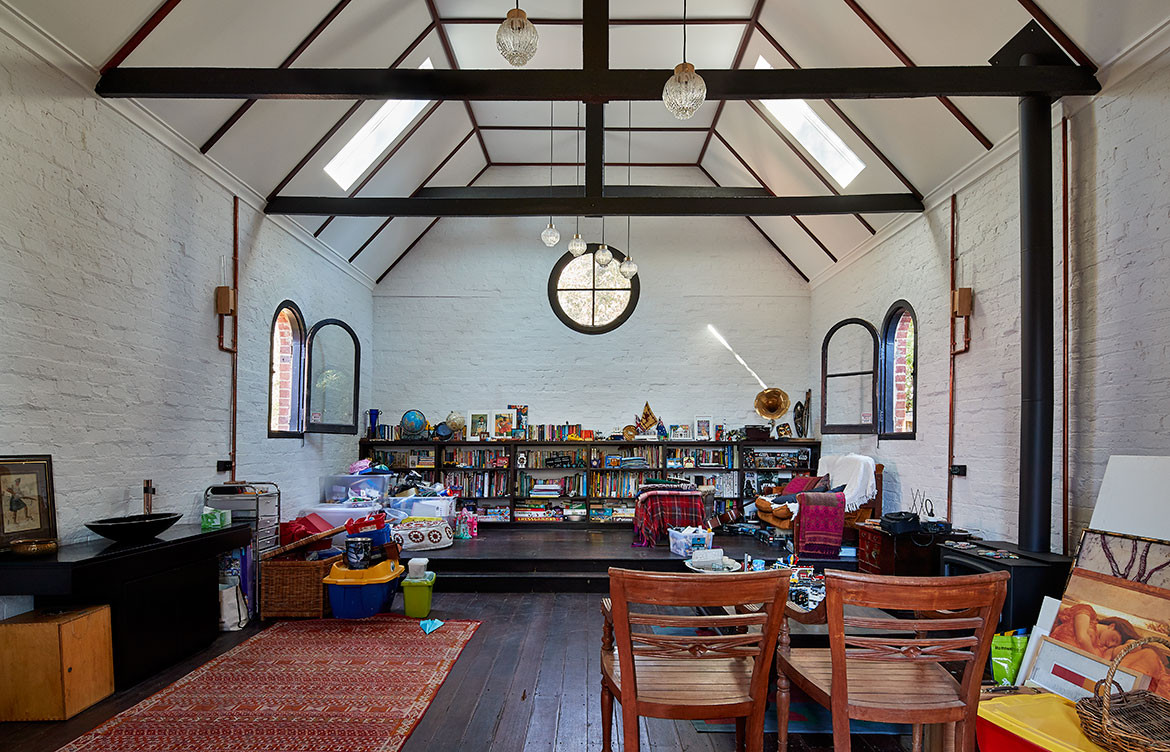 Clever use of space internally helps maximise flexibility and reduce waste. The two children’s bedrooms are arranged in a linear sequence with a spare room between for guests and sliding walls that can easily re-configure the spaces.
The L-shaped kitchen – with an island bench resembling an altar to the dining and living spaces – conceals a walk-in pantry behind the impressive stove, and multiple benchtops enable mother and daughter to indulge in Masterchef-style bake-offs. Downstairs, the entire double garage and workshop are given over to mountain bikes.

In contrast with the main house, which is almost spartan in its appearance, the church is the centre of activity: a place to indulge in hobbies, have fun, and make a mess. “The way they have separated the church and moved all of their activities out there is a liberating way of thinking about how to use that space,” Adrian says. “It’s a genuine display of how they live, and a great use for what was effectively a shared public space.”

While this may have been an economical project to design and build, it is rich in ideas, imagery and meaning, totally in keeping with the church’s pivotal role at the heart of community life for a century. 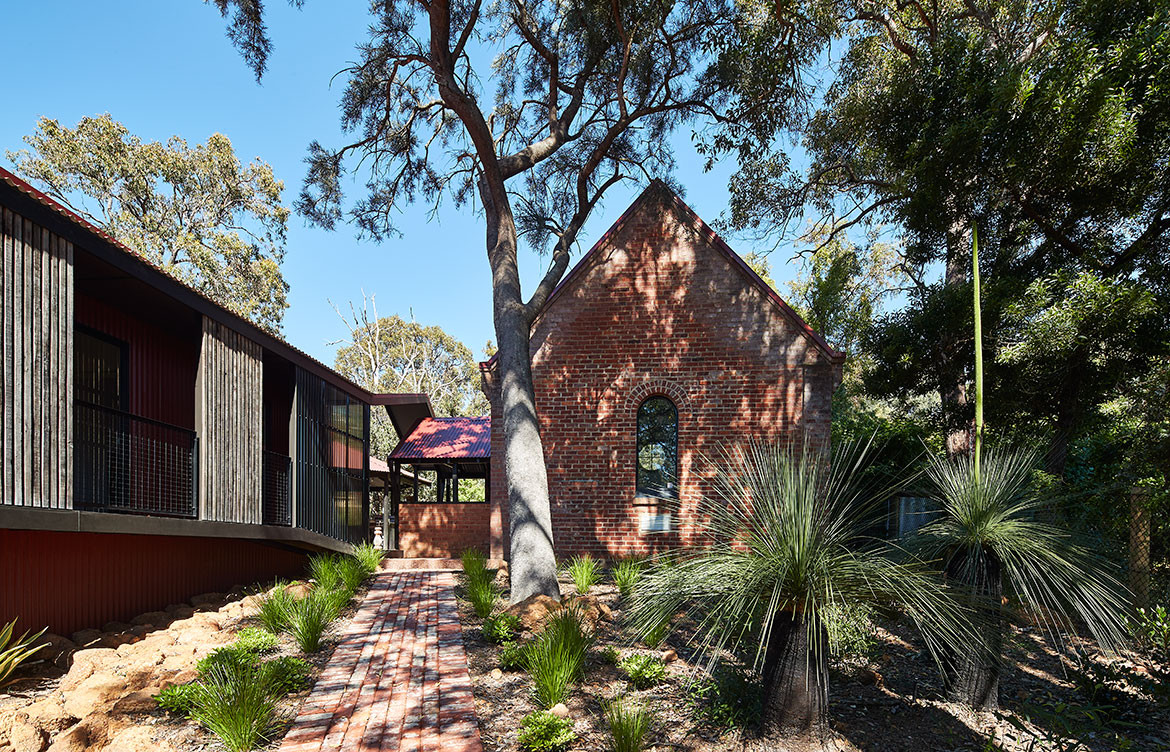 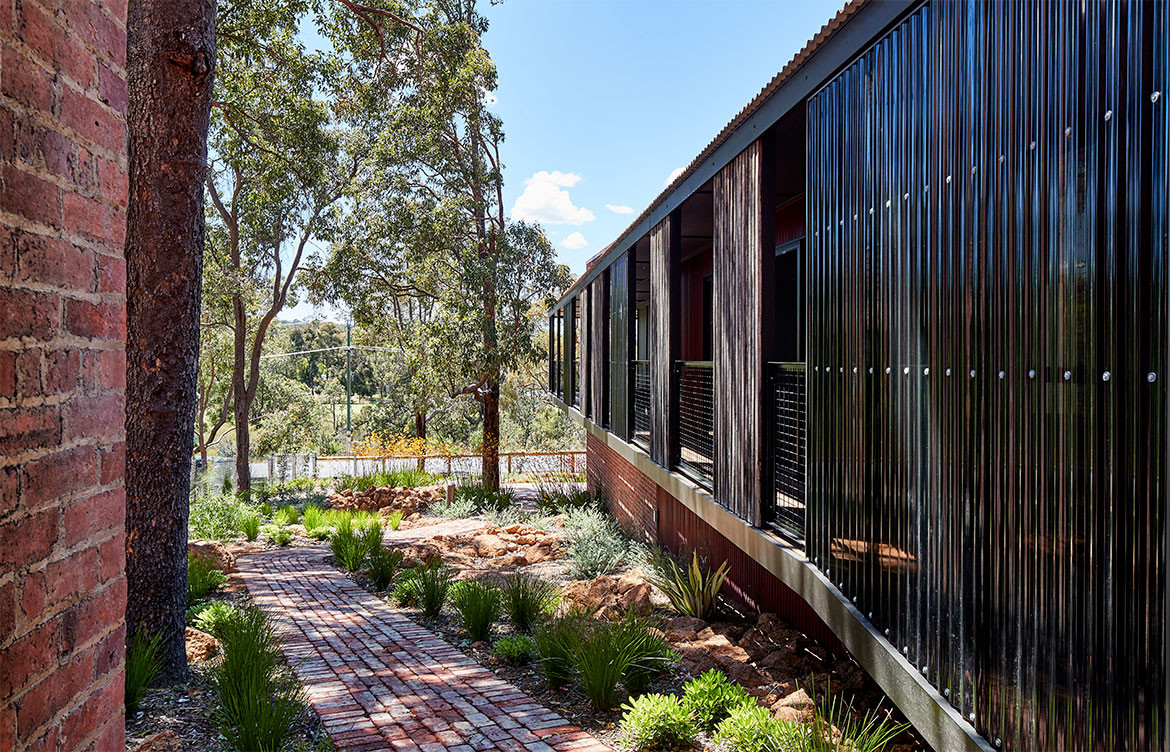 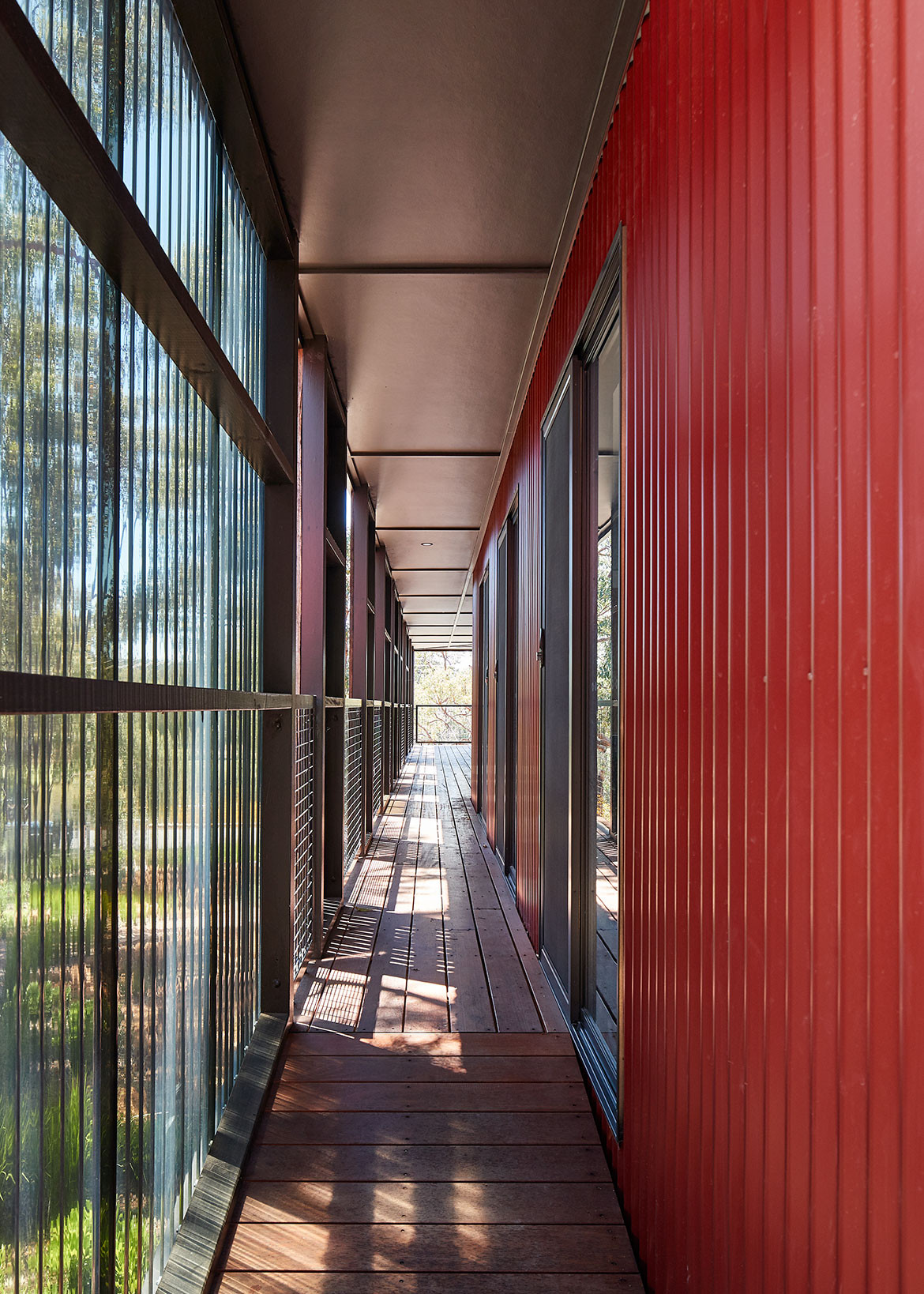 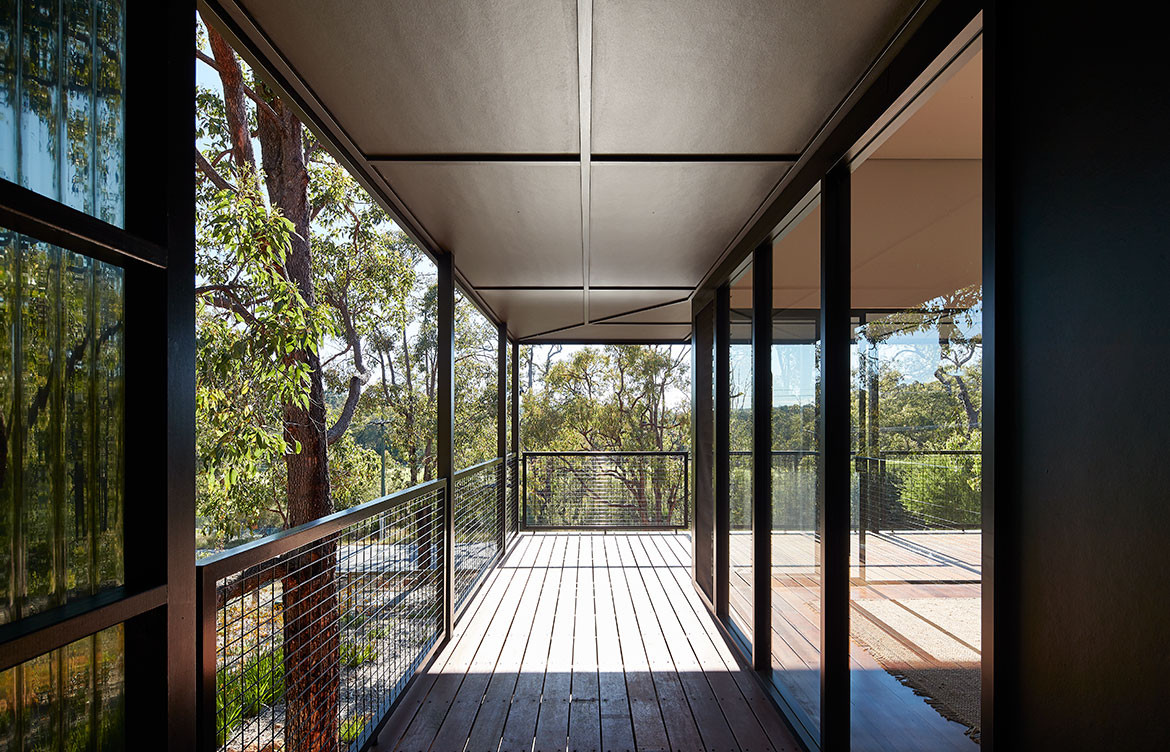 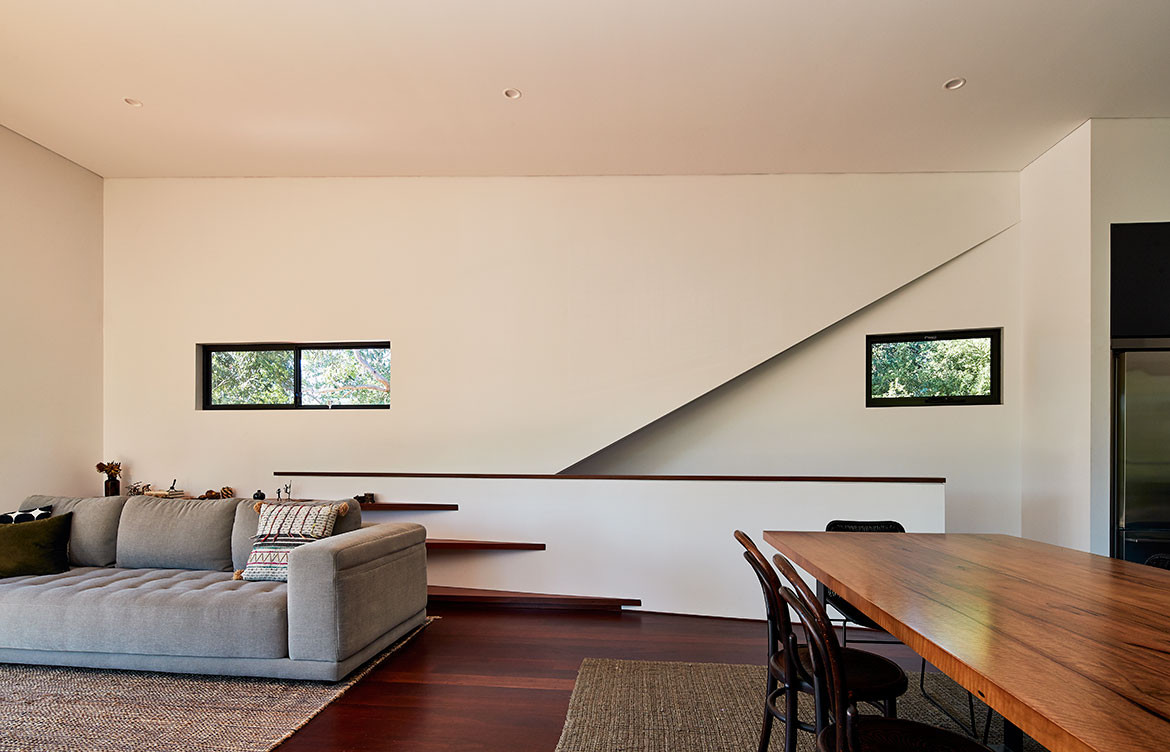 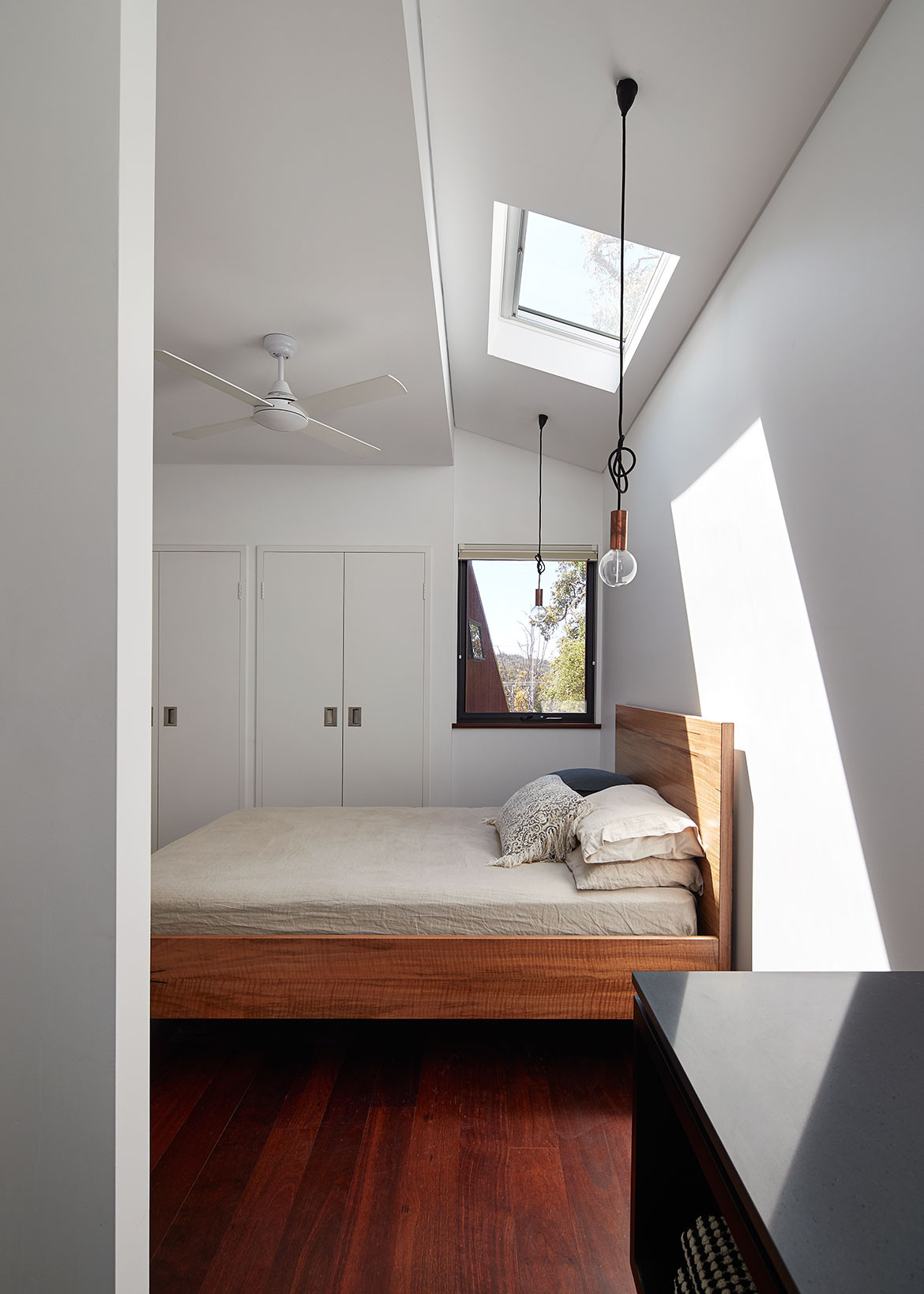 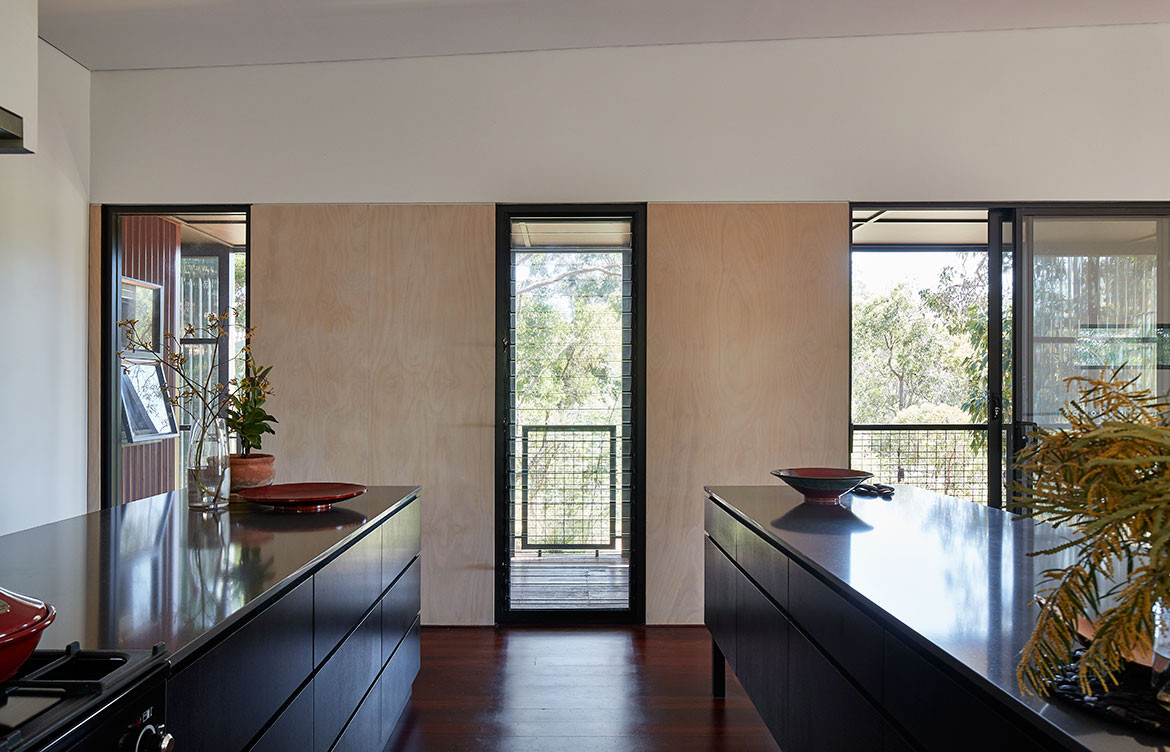 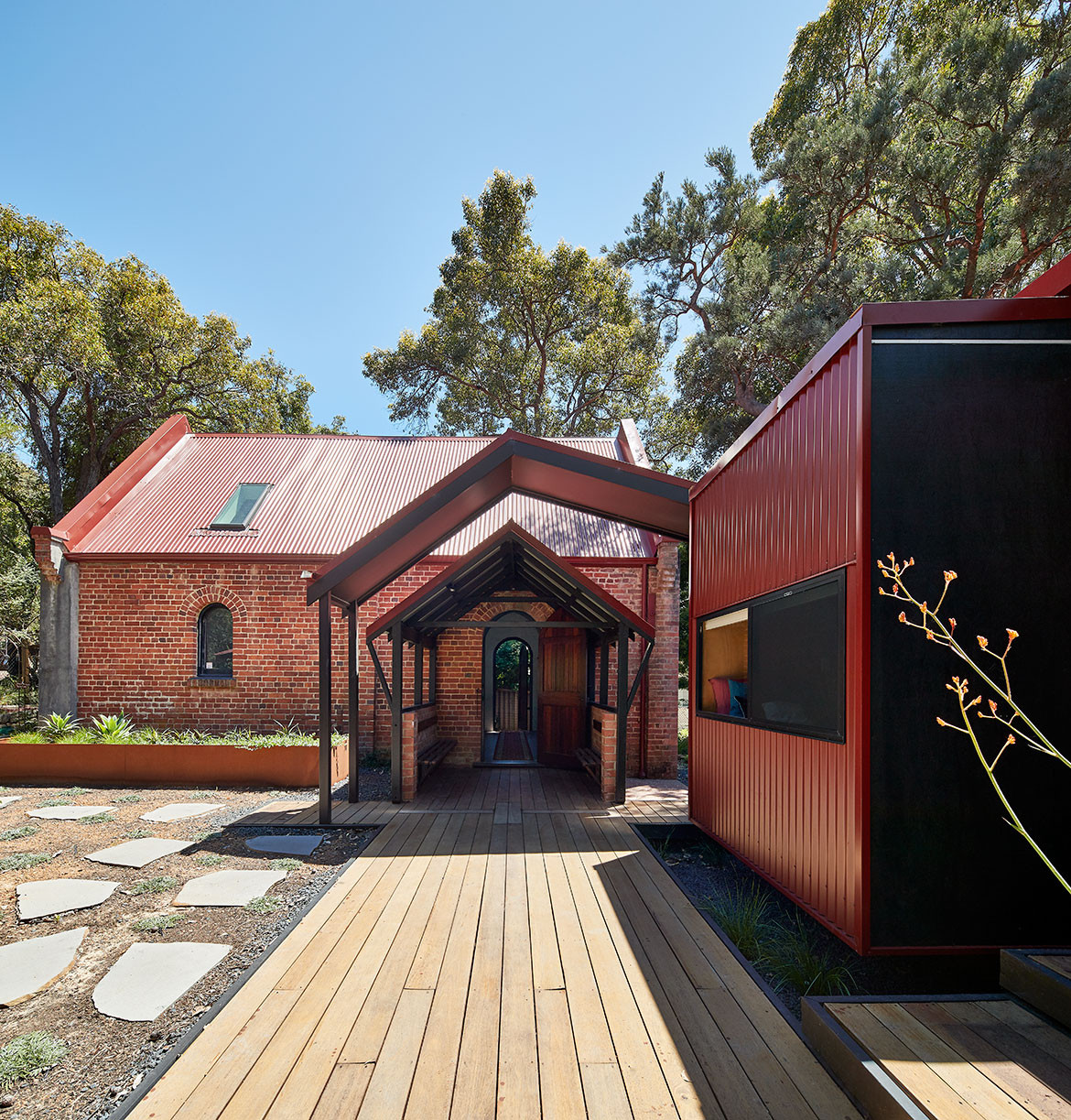 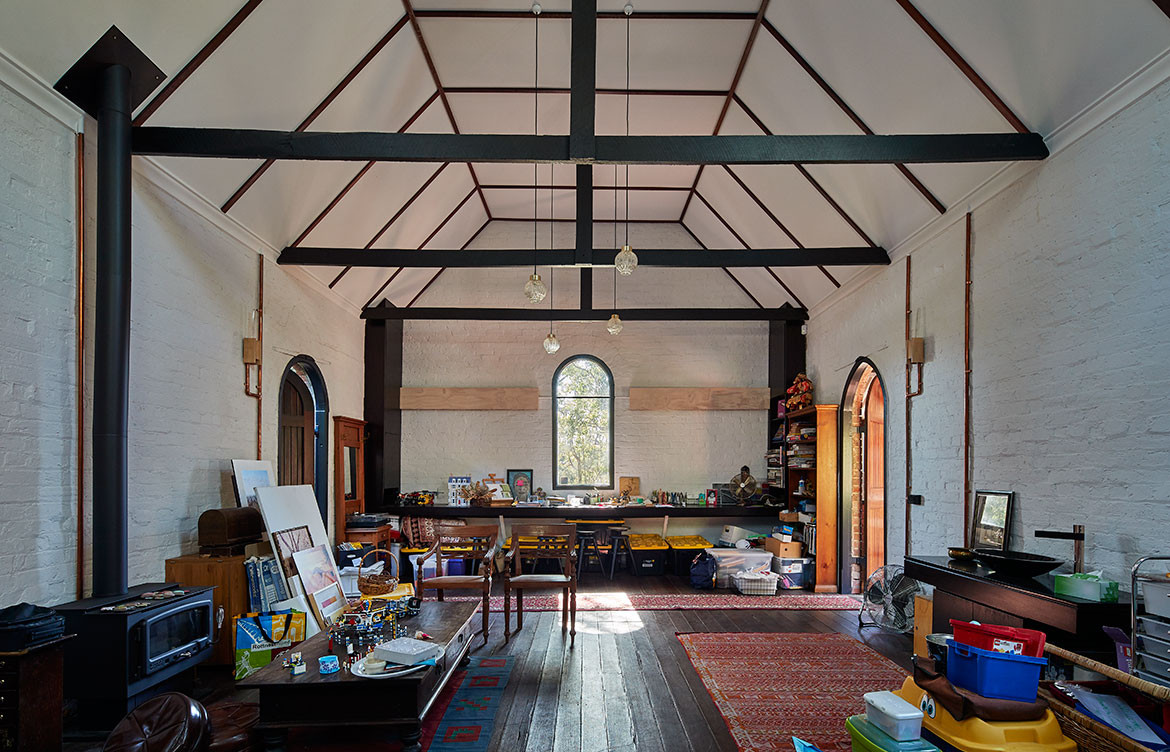 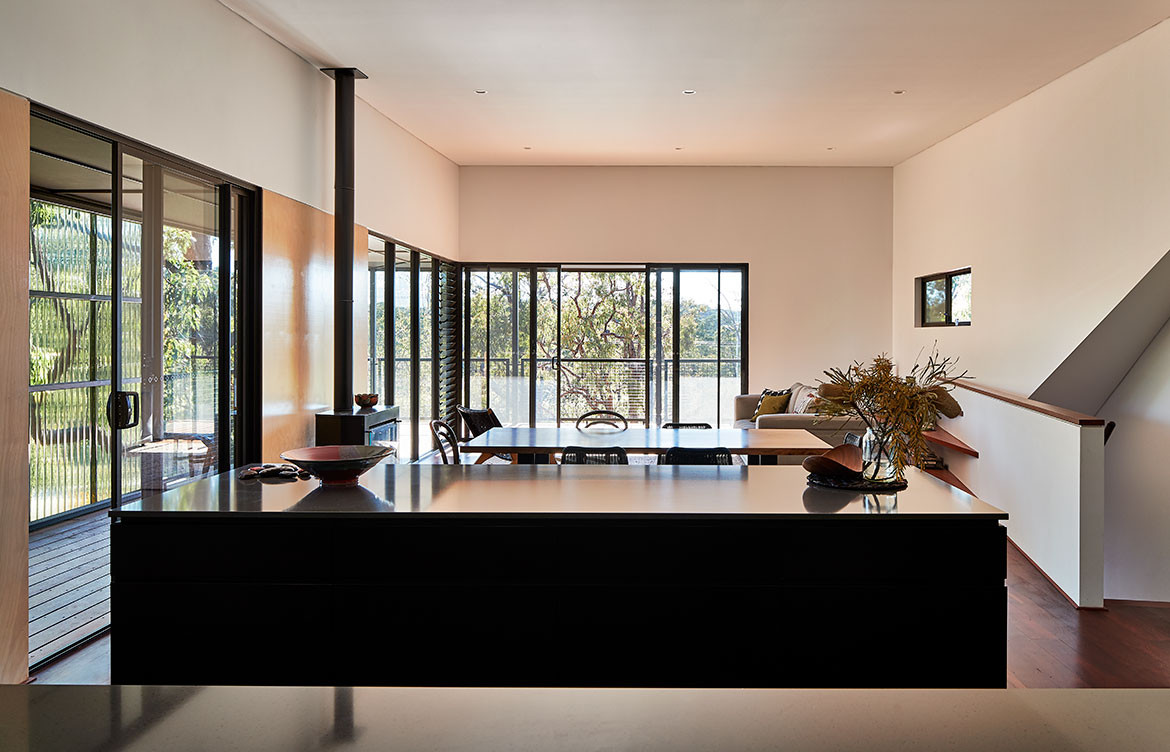 LIGHTING
Lighting and electrical fixtures throughout from Pierlite and Clipsal. 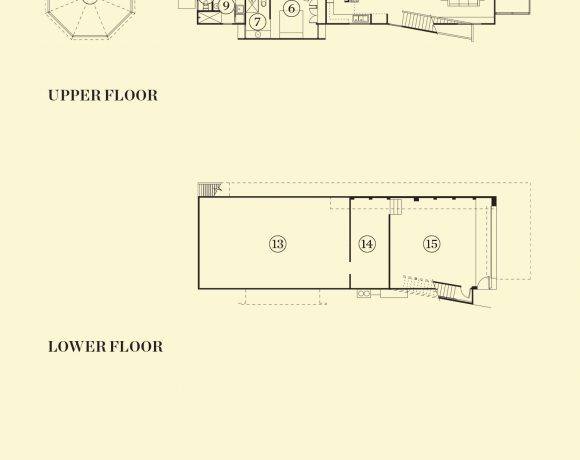