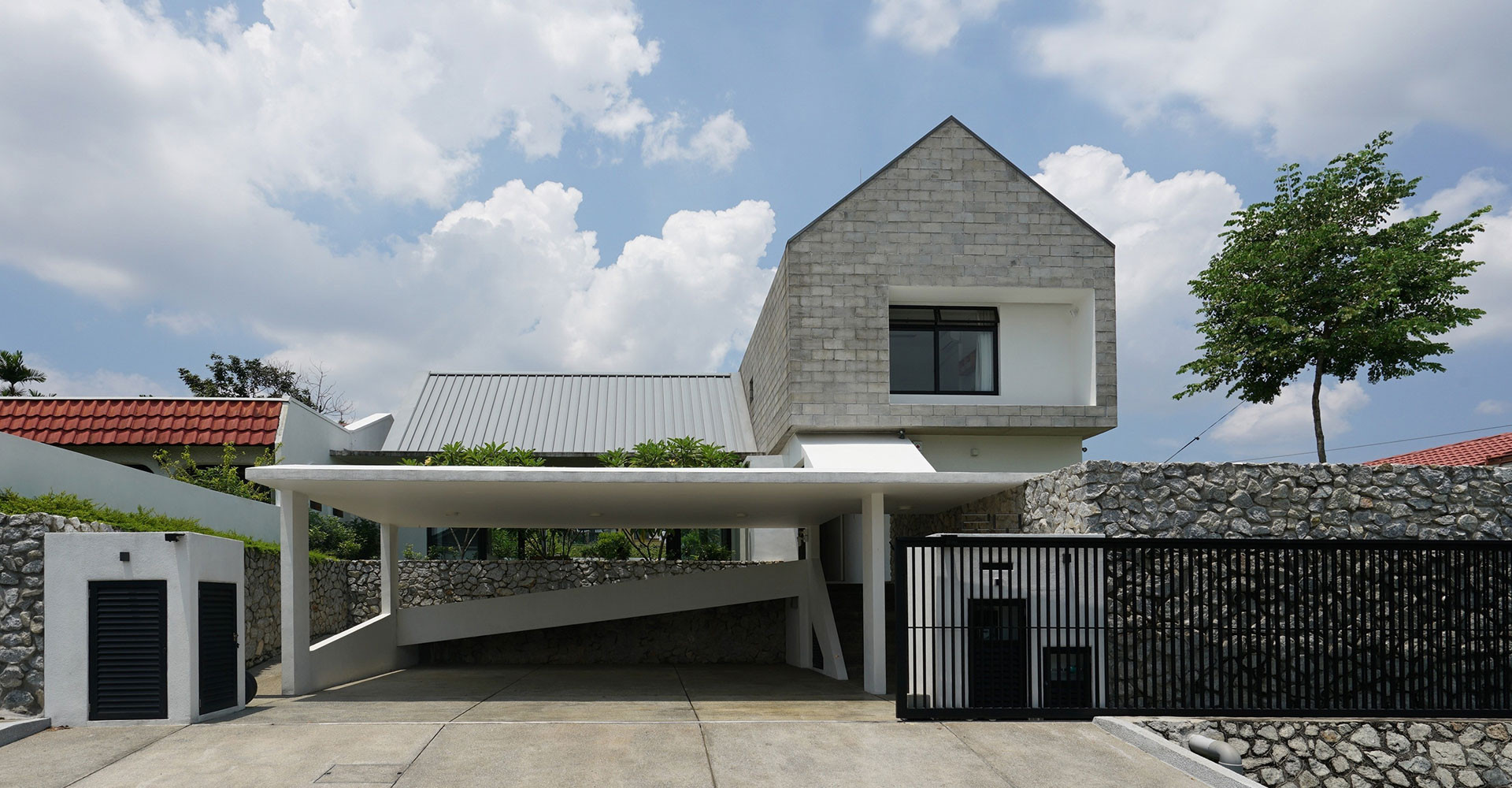 On a relatively small plot, the architect of this house has managed to create a fascinating family of spaces where inside and outside are brought together.

The architect of Knikno House, Fabian Tan of Fabian Tan Architect, trained at the University of South Australia before returning to practice in his native Malaysia. But he is typical of South-East Asian architects in that his creativity is multi-faceted, ranging from architecture to art and furniture design. This is evident in the imaginative spatial configuration of this house and in the detailing which plays with a complementarity of materials and palette enhanced by the sensitive manipulation of light.

In the words of the architect: “The spaces are subtle and experiential and the parts relate to each other to make a whole through materiality, form and light.”

The brief was for a modestly scaled house, but with sufficient space for a family of four plus two dogs – and a koi pond. In fact, the house is semi-detached, with the short wall at the end of the living space being the party wall. Hence, Fabian Tan set out to create the sense that the house was actually freestanding with the spatial amenity of a bungalow.
The clients also suggested something along the lines of a country house or barn without being old-fashioned. This led to the idea of using gabled rooves and warm materials such as exposed timber. More pertinently perhaps, we can see the roof profile and vaulted interior spaces hinting at the traditional Malay kampung house – an image supported by the way the longitudinal, single-storey ground-floor living pavilion blends seamlessly with the front and back outdoor spaces, and by the dramatic internal views from the upper level of the intersecting private wing down into the public area of the living space.

The plot is a little over 500 square metres and has a drop in level on the street elevation. This sets up an ongoing conversation between verticality and horizontality, open space and enclosure which is played out immediately on arrival when the visitor can either approach the house from the carport via a flight of steps up to the front door or via a kinked ramp. The entry leads into a corridor which offers a choice of turning left into the living pavilion or right into the private wing of the house.

The understated rustic character of the house is supported by the rubble stone walls which define the perimeter and provide privacy from the street. These stone ‘ramparts’ also lend a castle-like character to the house where the longitudinal living pavilion meets the vertical two-storey private bedroom wing. There is also a play with contrasting tones between the grey concrete blockwork of the two-storey volume and the sleek white modernity of the living space. In turn, these tones complement the charcoal framing of the sliding glass doors, the grey stonework of the back terrace and black koi pond and, inside, the timber lining of the inverted gable ceiling of the living room space.
Needless to say, the double-sided opening of the living pavilion with its soaring ceiling encourages cross-ventilation, drawing warm air up and out.

The spatial intrigue of the house – with its T-shaped plan generated by the intersection of the two gable-rooves – is modulated beautifully by the way the entry of light is crafted and by the way the living pavilion becomes a kind of central verandah, a way-station between the front garden and the enclosed rear garden. Hence, there is a satisfying balance of privacy and community within the house and between the house
and its neighbours. 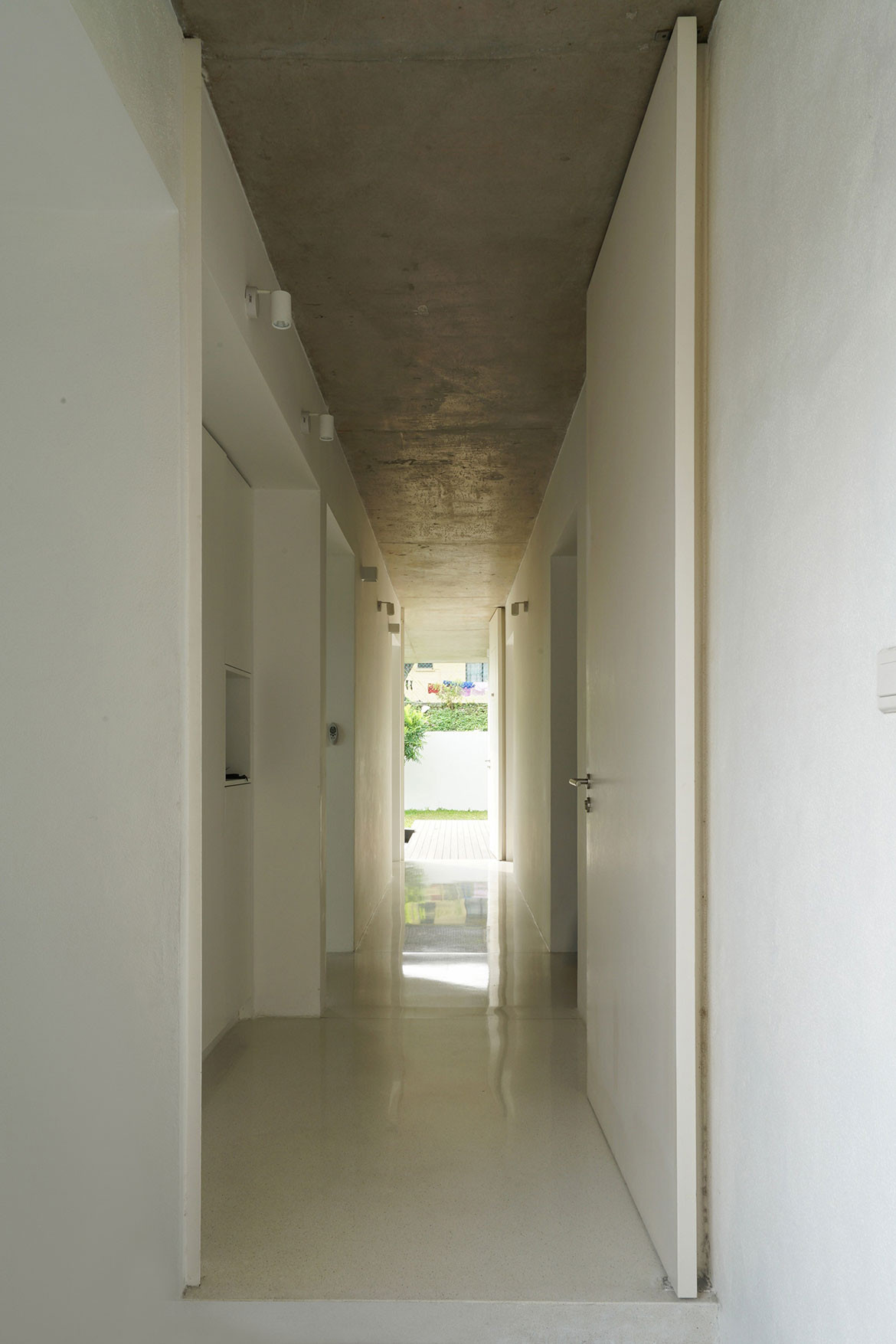 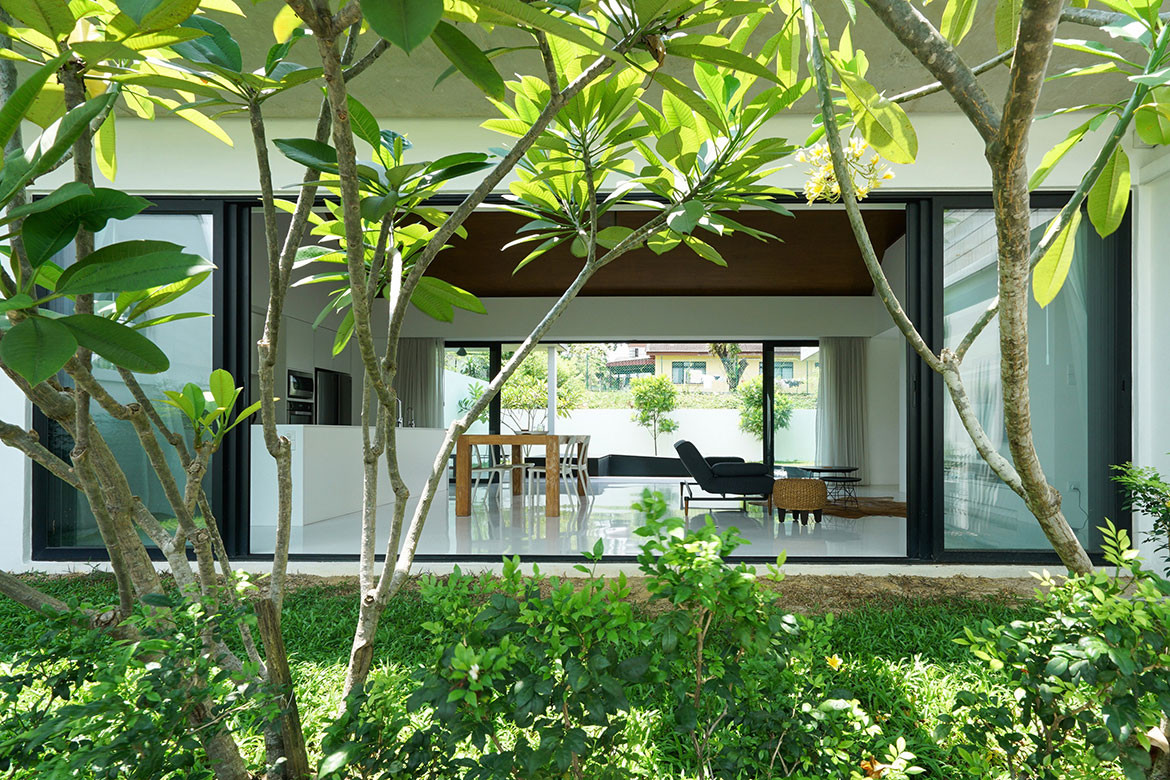 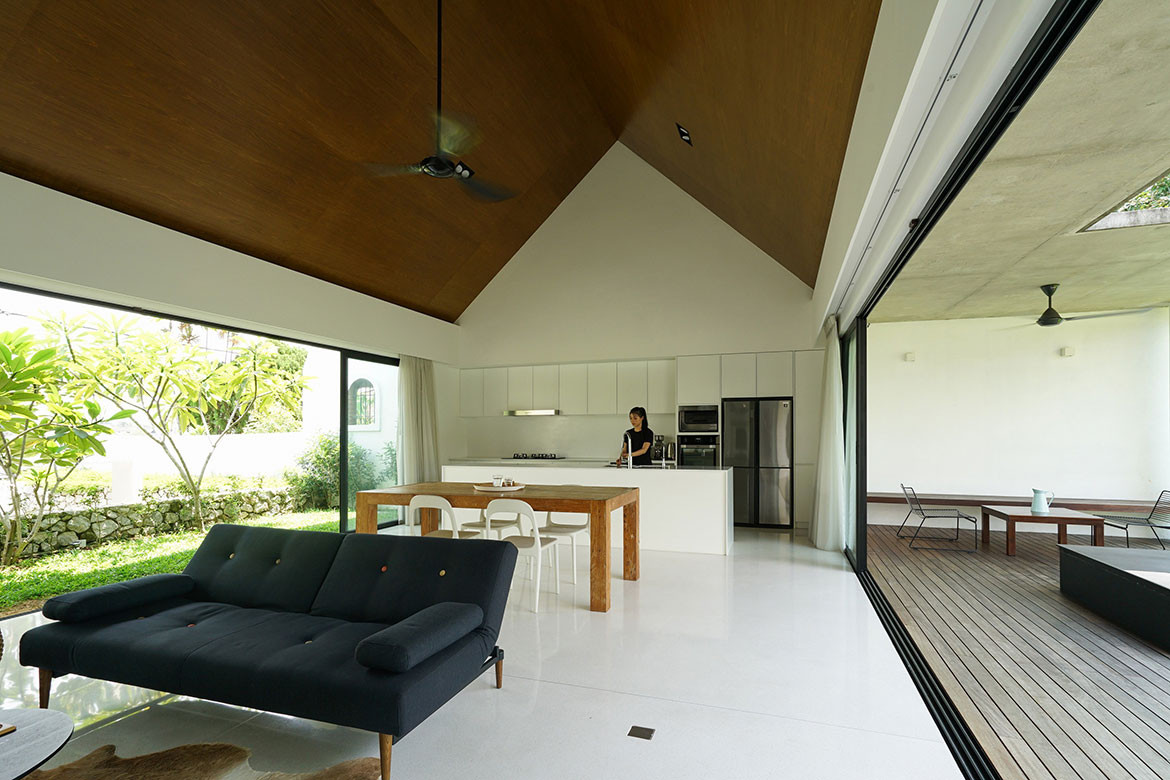 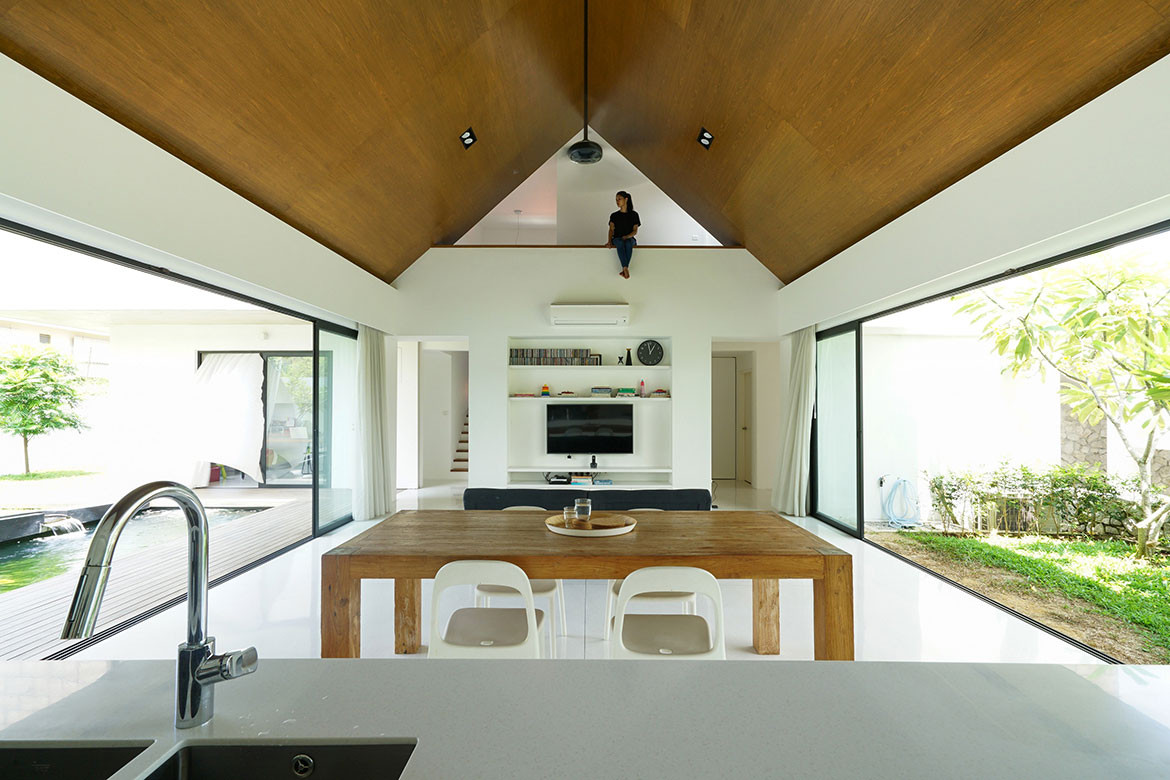 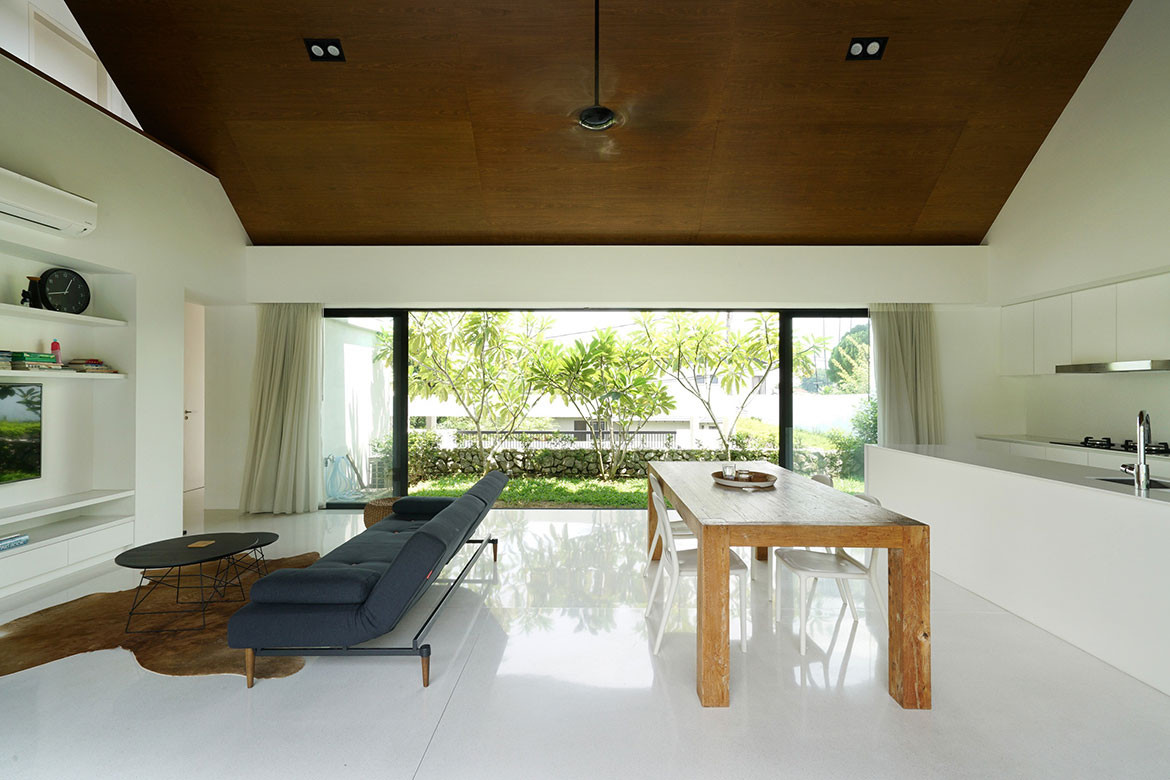 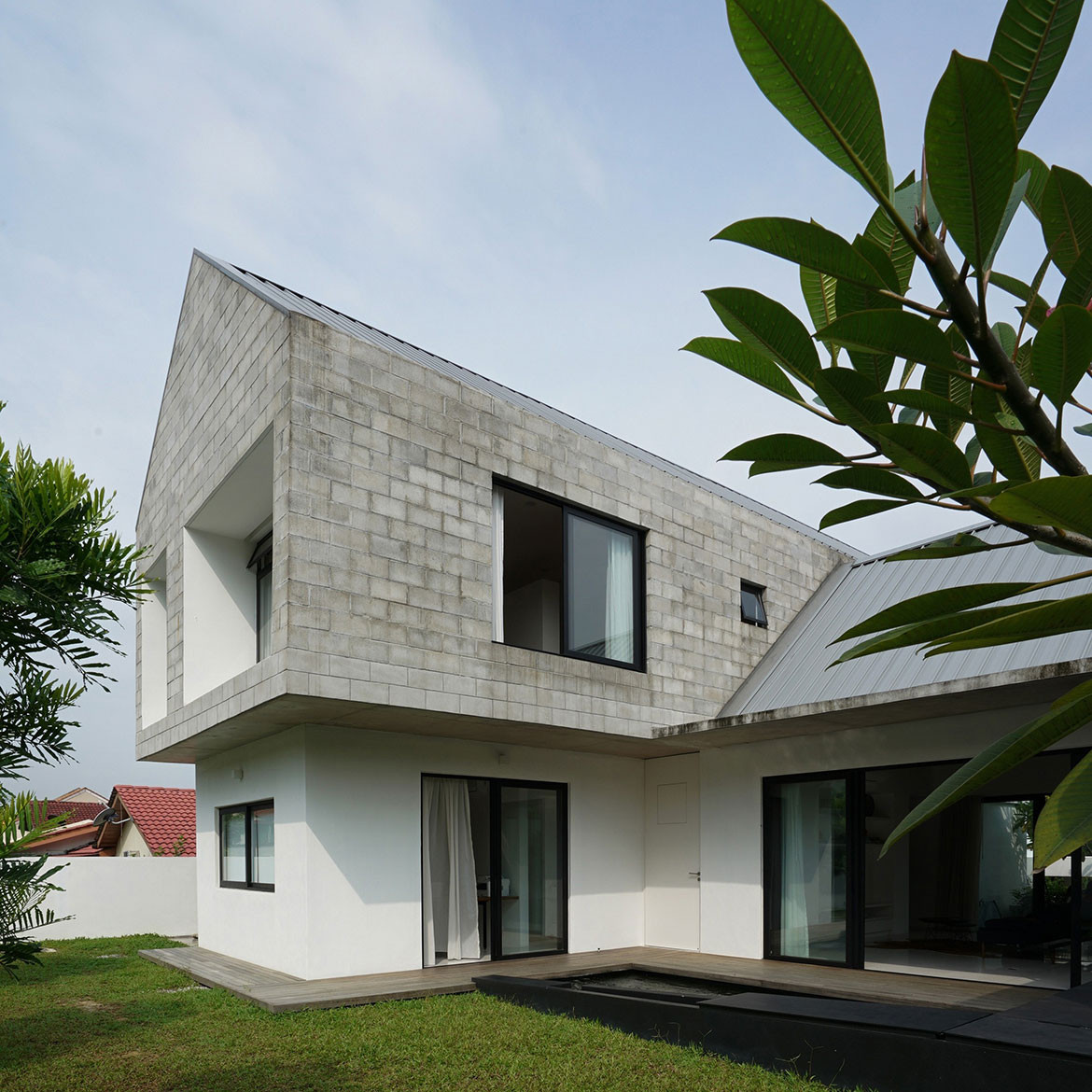 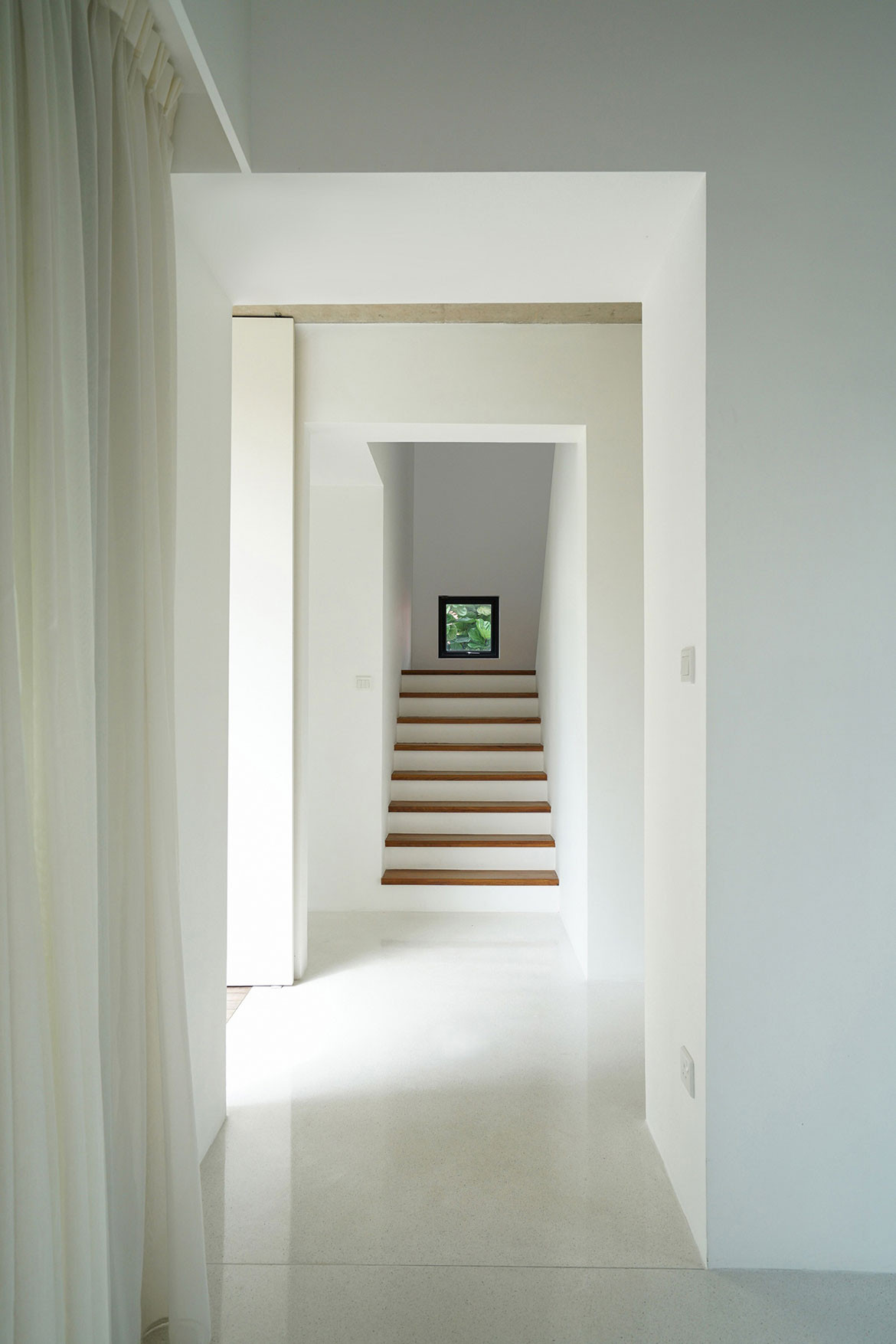 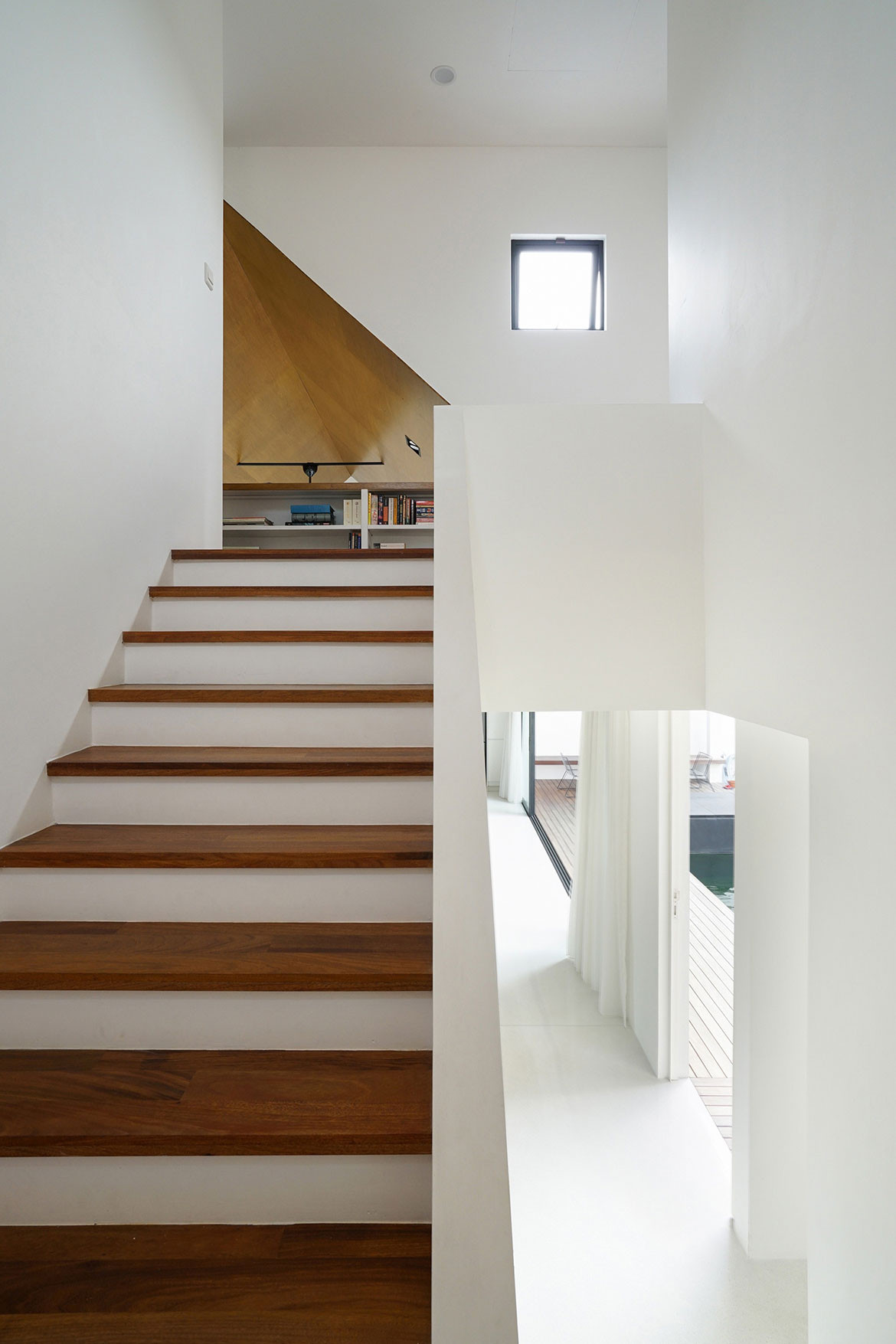 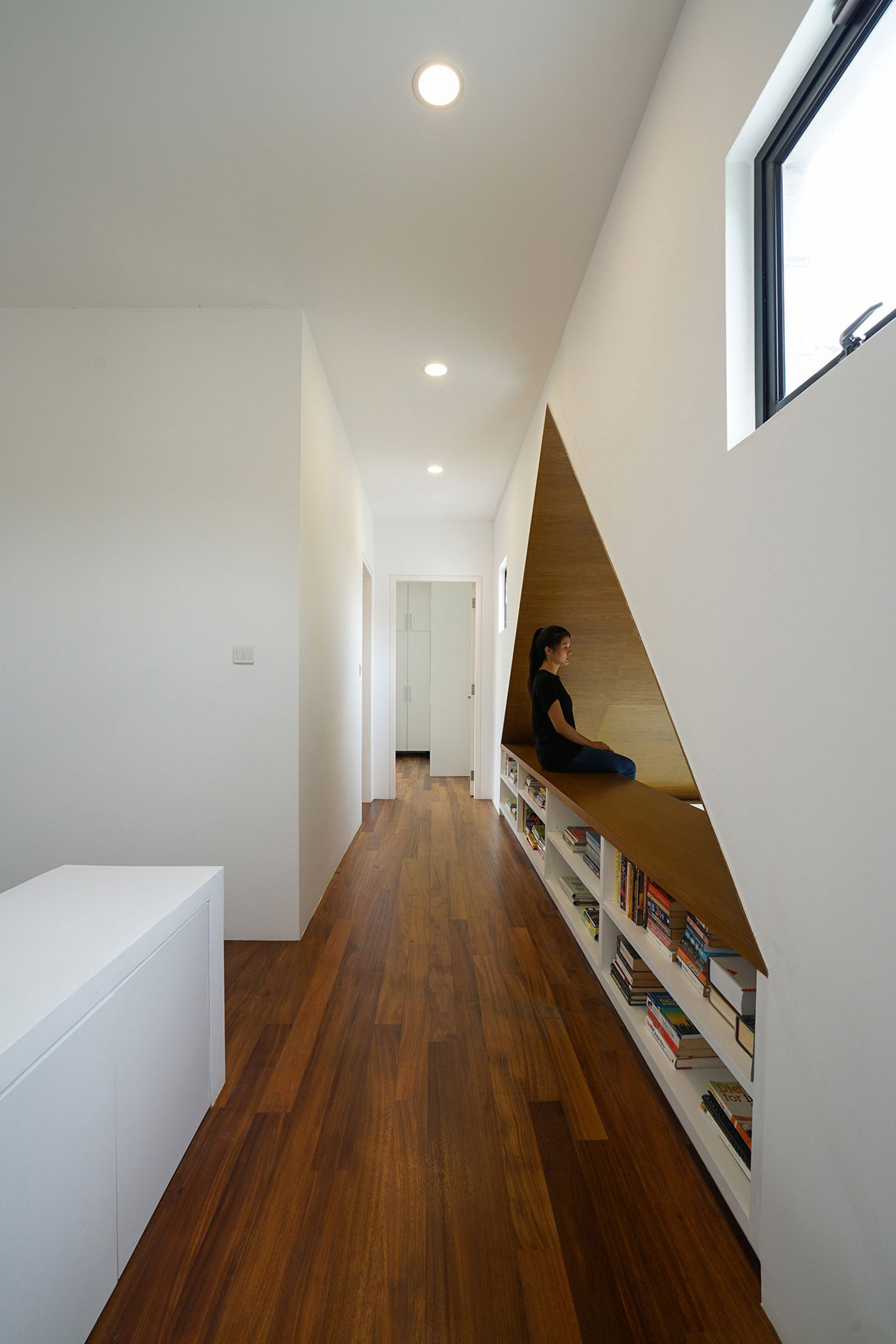 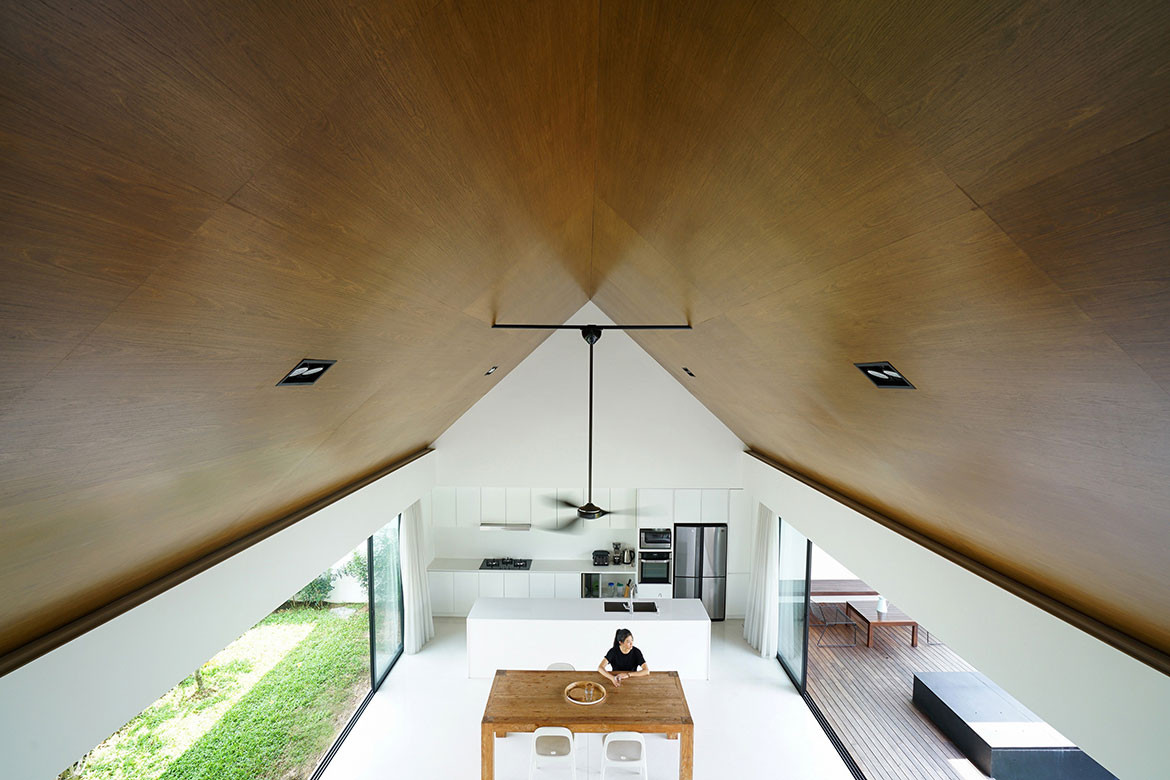 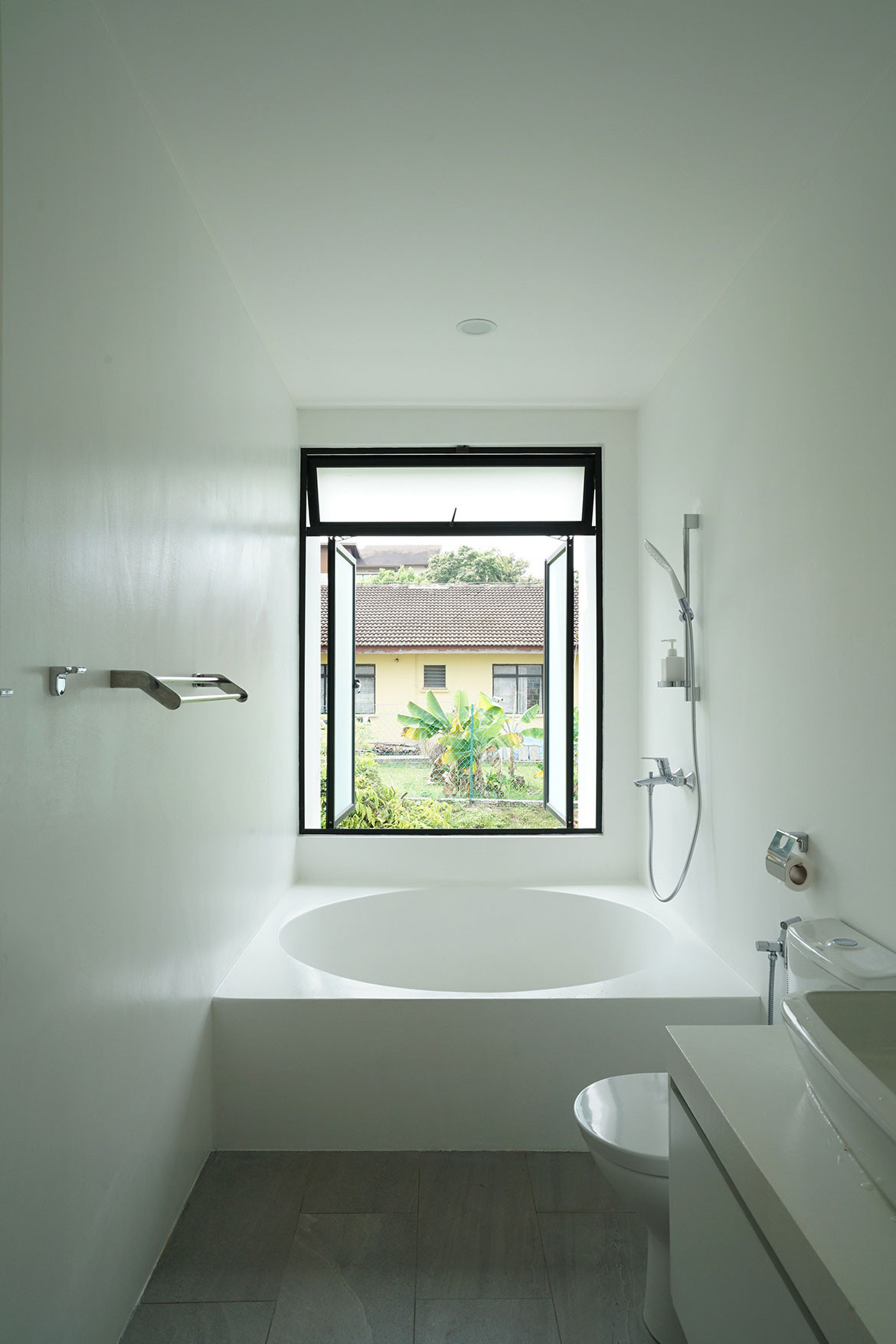 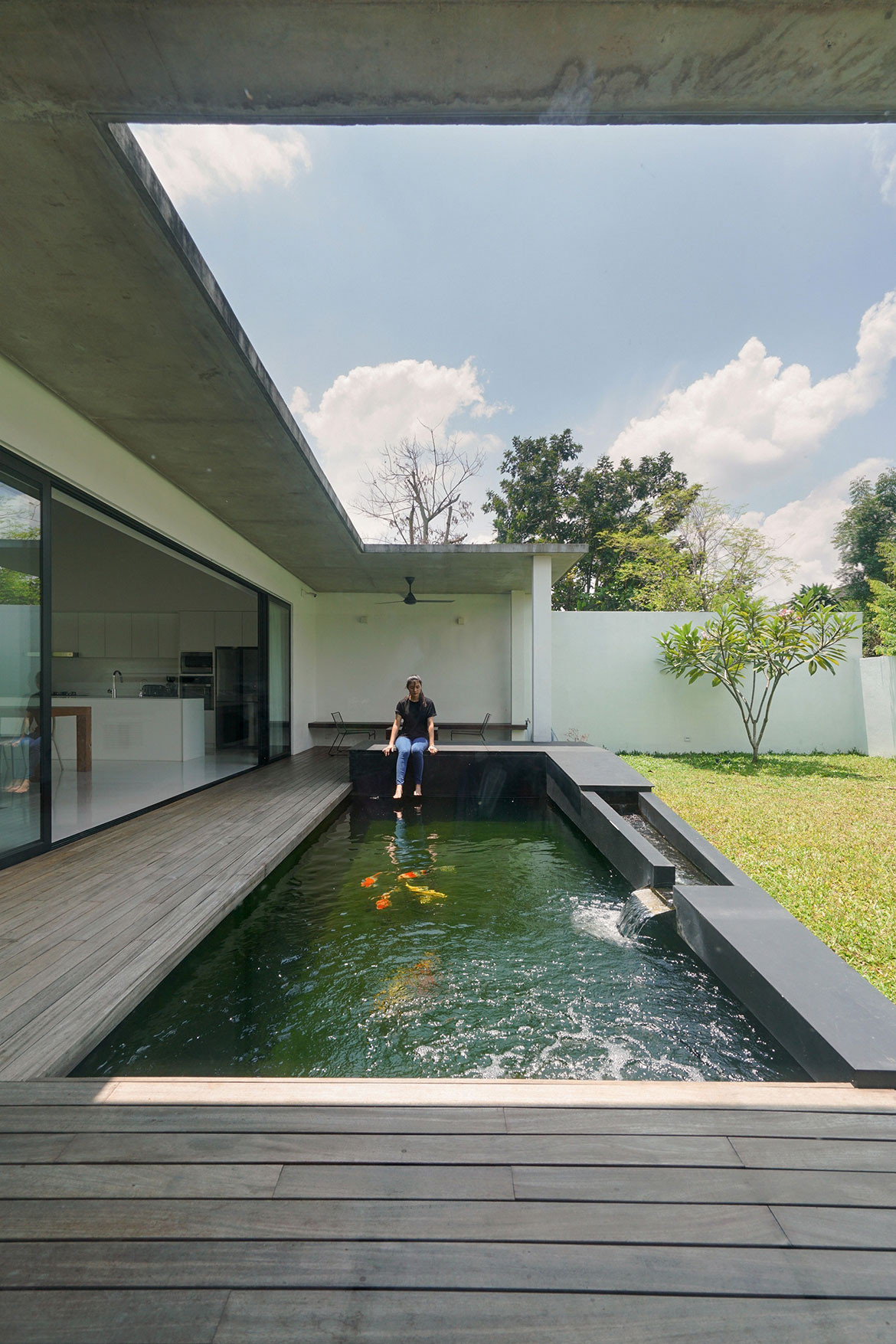 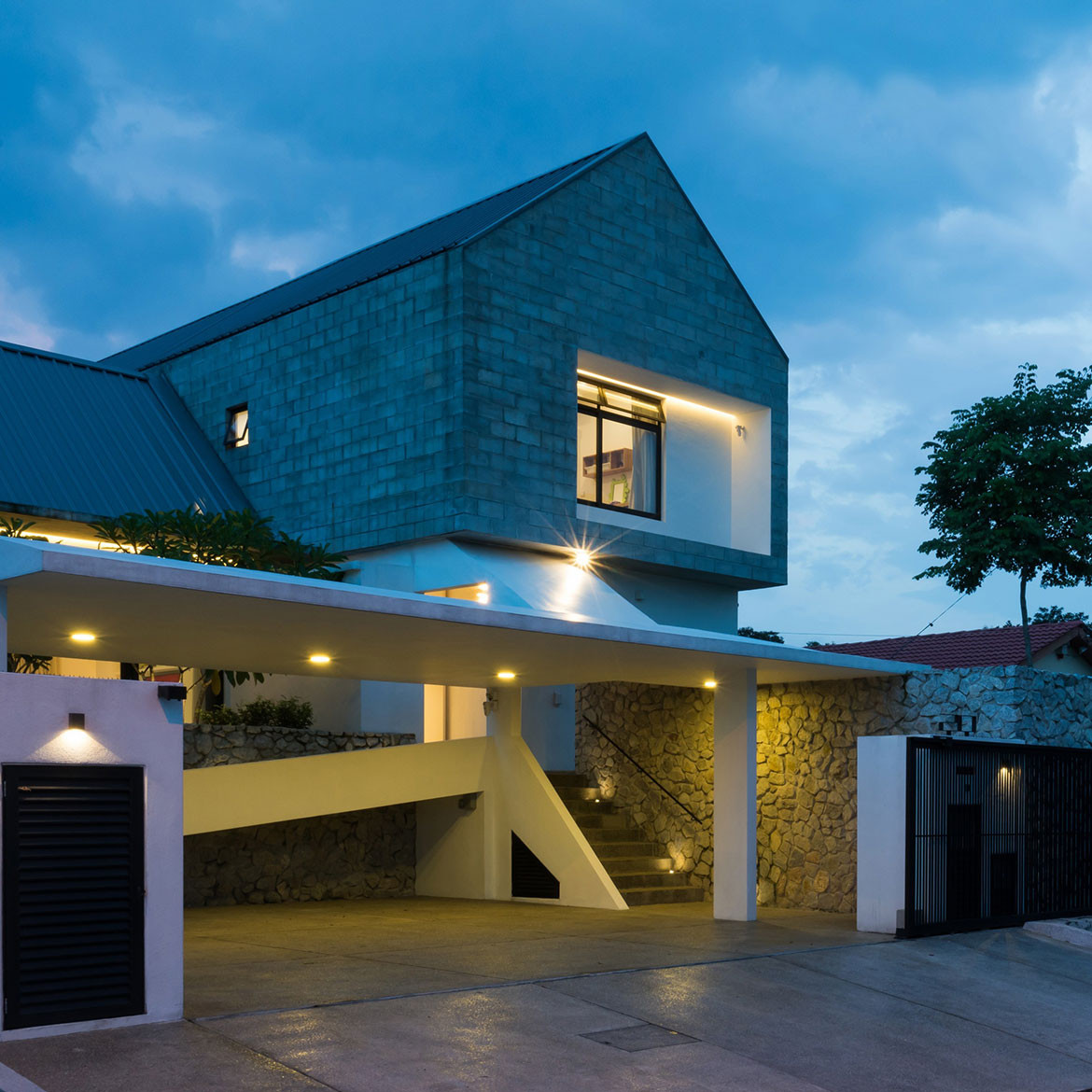 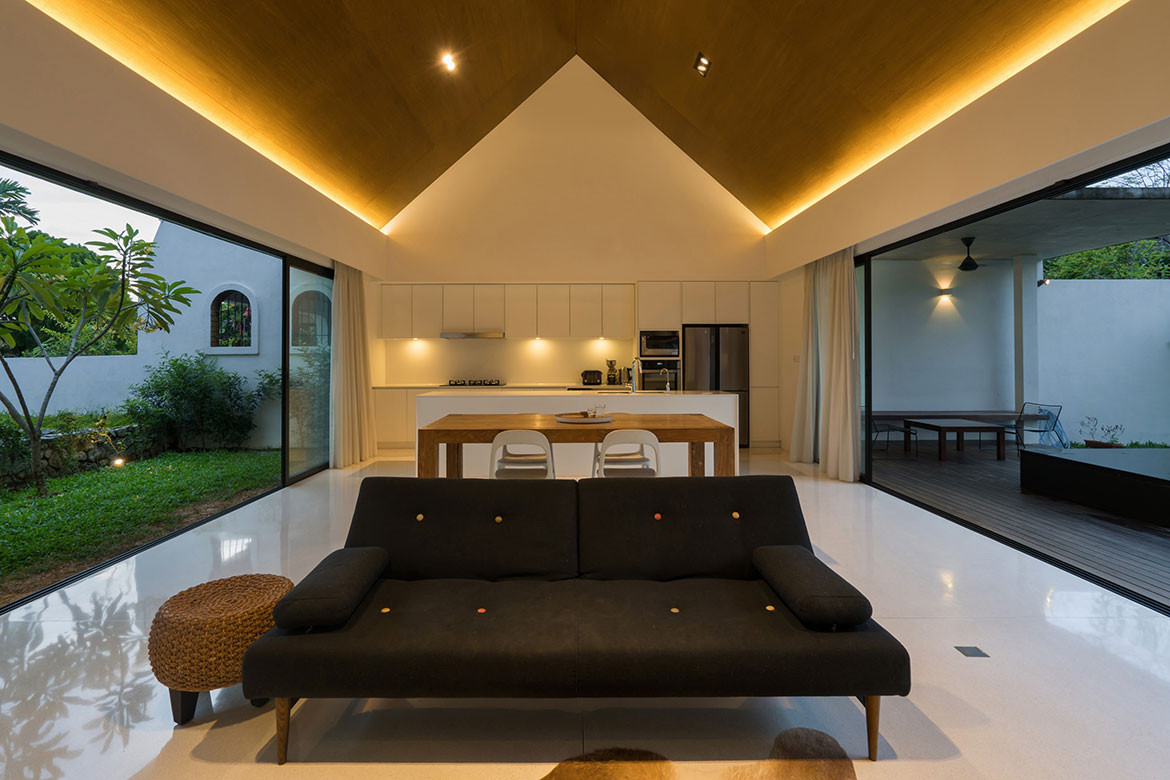 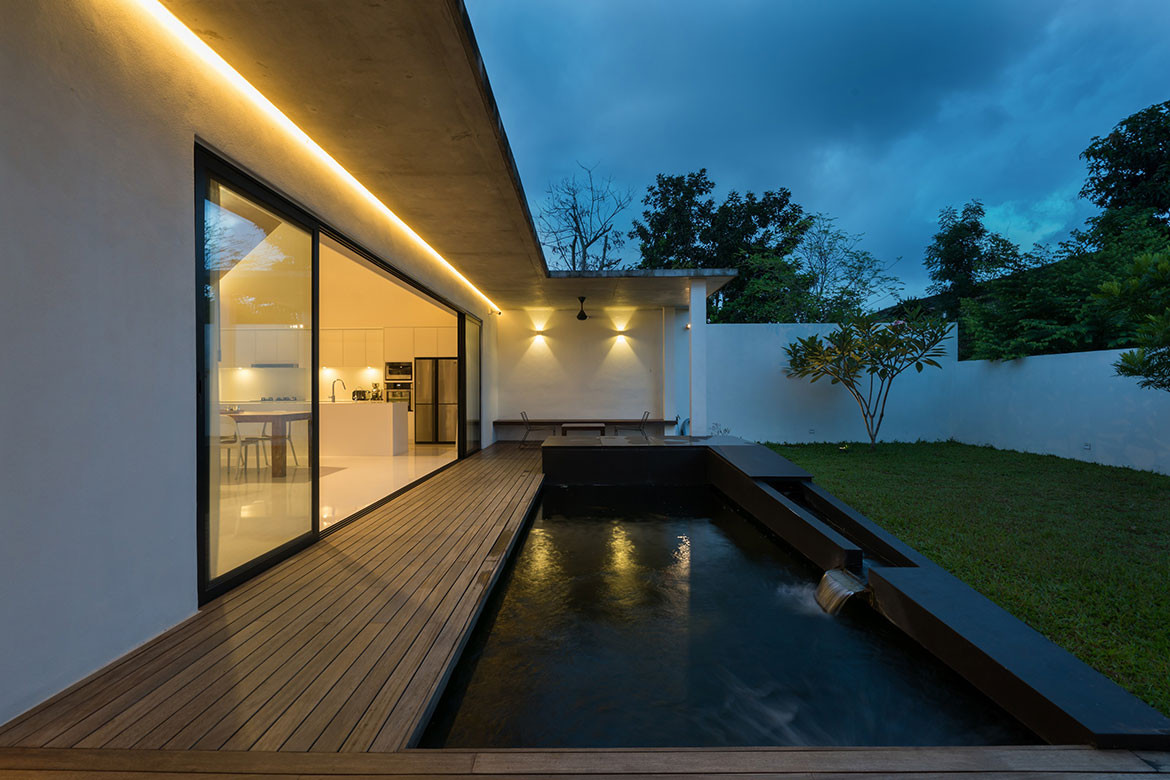 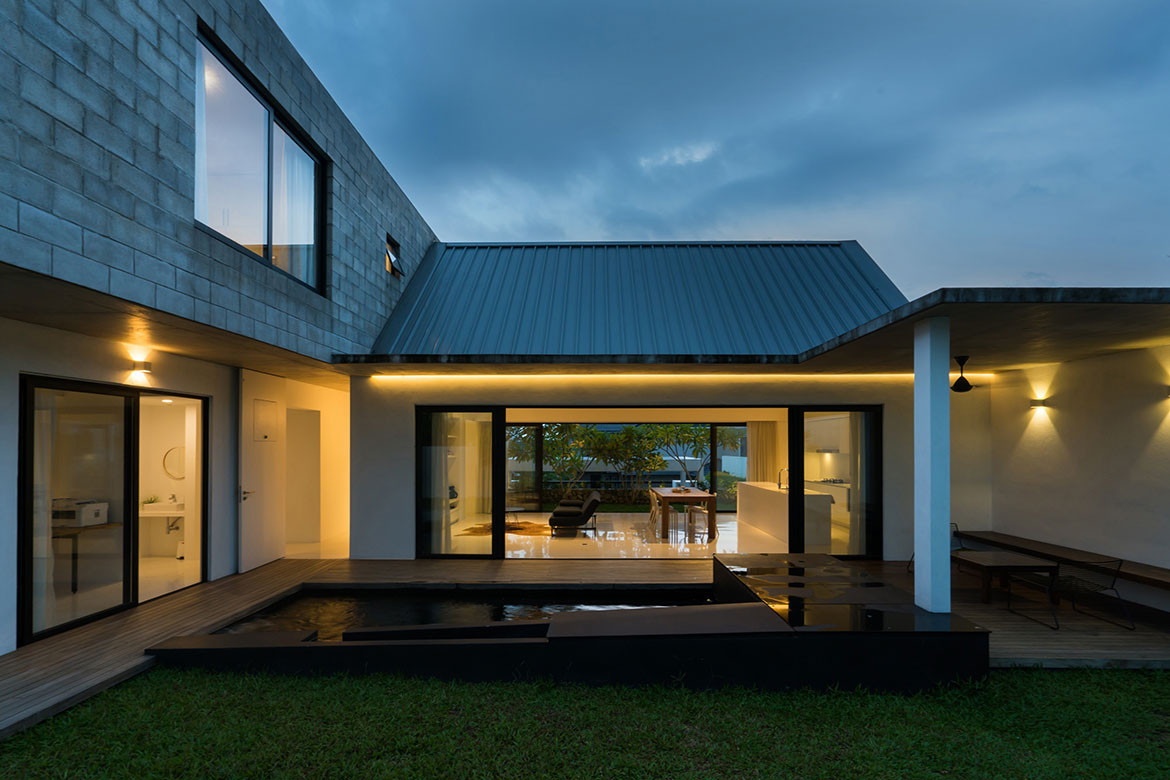 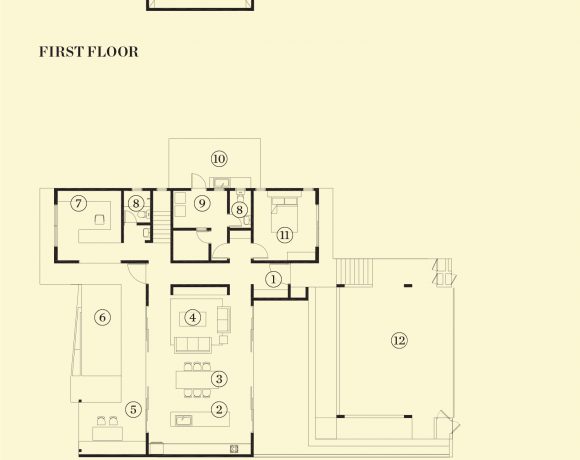