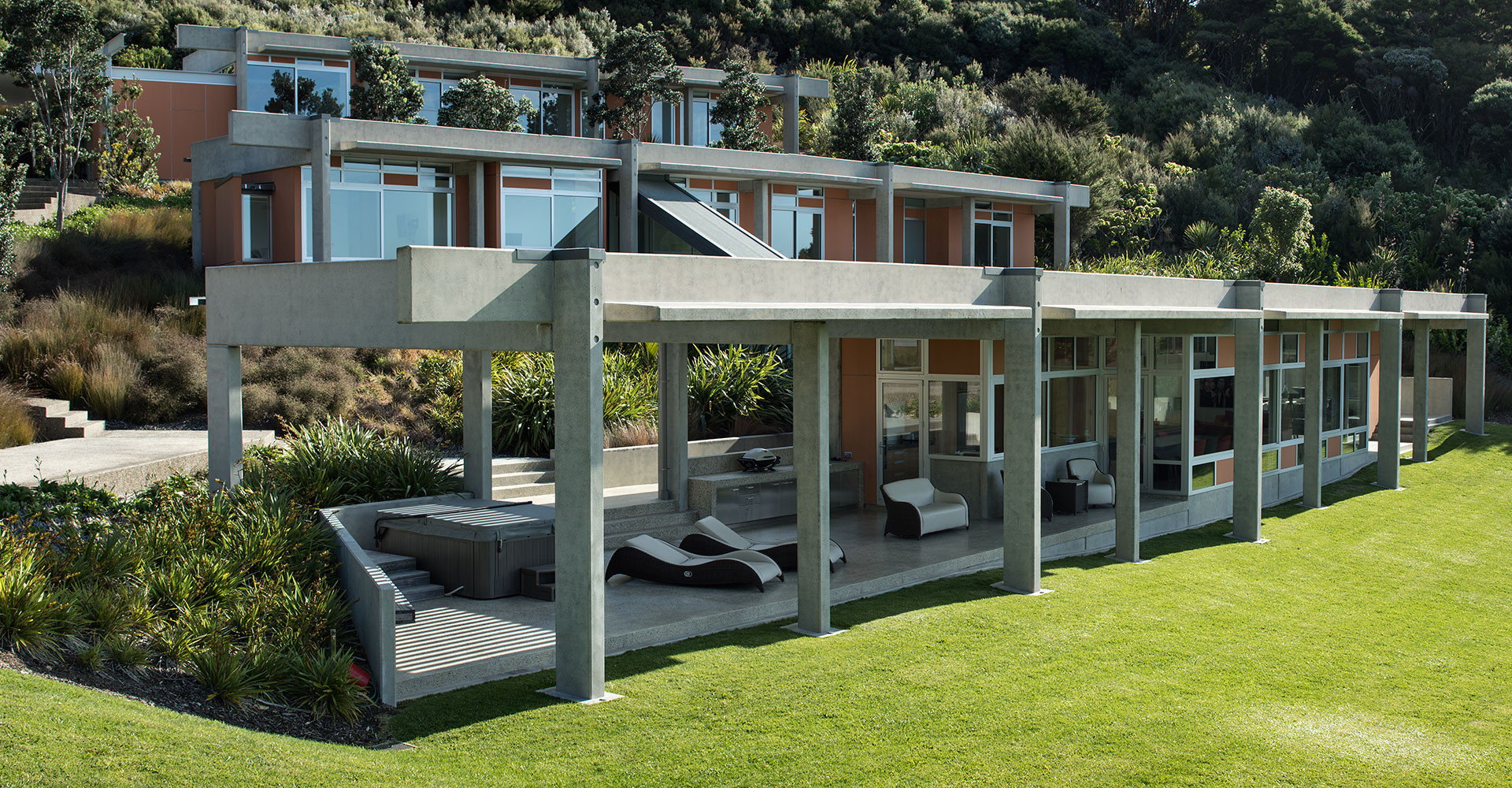 Remote coastal farms are being reforested and converted into luxury retreats around the Bay of Islands. Pete Bossley speaks about his latest house at Omarino, building in concrete, and how these projects sponsor the environment.

Omarino is a significant headland in the Bay of Islands which, just 15 years ago, was a grazed, dry stock farm. Like many of the nearby colonial-era farms, low productivity and distance to market provoked a change in use to smaller, private holiday sites. Cattle have been replaced with over a million native trees, bringing back the bush and wildlife with it. These farm conversions, like Parekura Bay, are essentially sponsors for forest regeneration, with mass replanting mandatory under the district plan.

Bossley Architects worked with Boffa Miskell environmental planners to develop a masterplan for Omarino – the former Bentzen farm – defining 17 residential blocks from 12 to 17 acres each. With defined building ‘islands’ amidst the new bush, the resource consent process required model house designs for each new site with flyovers showing the effect now and in ten years’ time. Sensitivity was placed on views from the sea, meaning house scale, design and materials had to minimise visual and physical impact to maintain the beauty of the coast.

Parekura Bay House is the 10th building Bossley Architects has designed for the subdivision, following Fold House, the manager’s house, two community buildings beside the wharf, plus boatsheds and workshops. “This house is an iteration of our ‘encampment’ house idea,” says Pete. “Big houses that are broken into small units to reduce bulk, and where spaces and relationships between the buildings become really important. How you negotiate those spaces, and how much or how little connection, becomes an interesting aspect and offers more of a holiday feeling than a city house.” 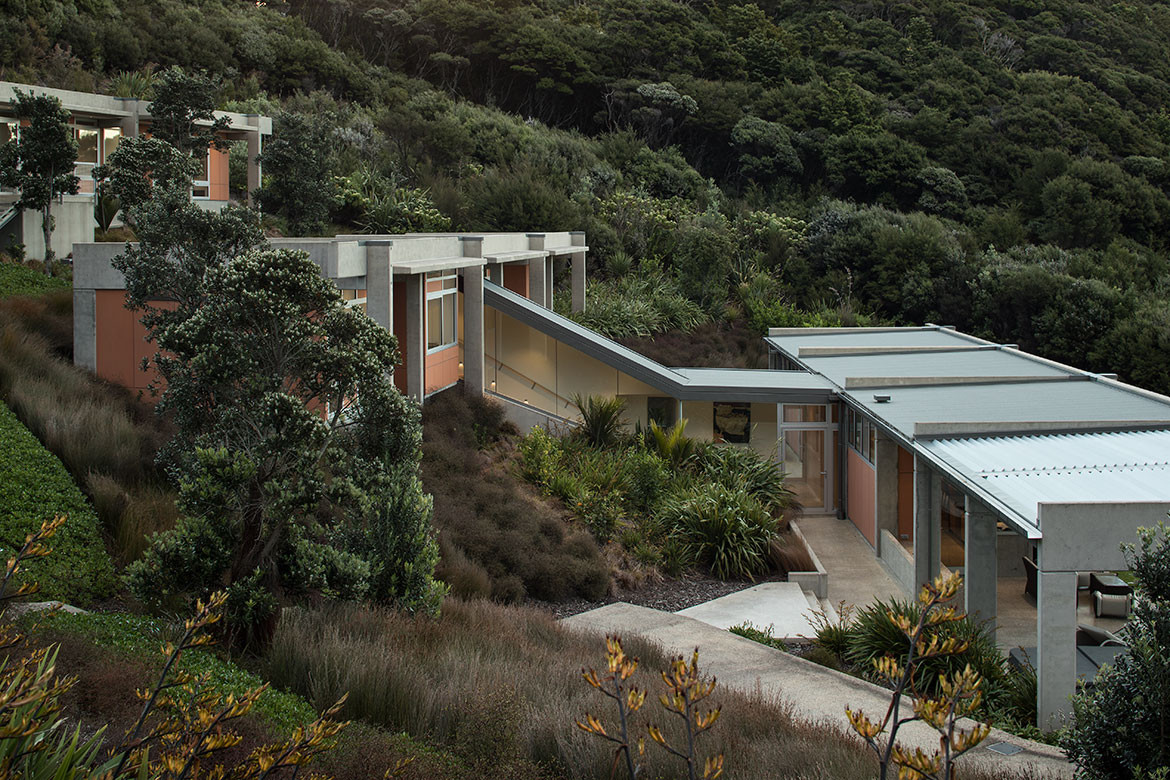 Pete has designed a floor plan with three parallel wings that step down with the natural contours of the land. Each wing has sea views over the roof of the one below, which feel like terraces of a large amphitheatre. Mature trees growing between the wings are slowly camouflaging the building and blending it into the forest.

At the top level, an independent guest house, carport and garage have the longest sea views out across the main dwelling. The middle level contains three bedrooms, bathrooms and a living room, and connects down to the main dwelling via a glazed staircase. From here, it opens out onto the living, kitchen, and dining level, and a large sheltered terrace. A 30-metre foreshore setback means a broad lawn separates the house from the beach while regenerating bush envelops the house on the other three sides.

“In the construction business, the clients asked for a concrete house,” says Pete. “But rather than a concrete walled house, we developed a lighter language of exposed pre-cast concrete columns and beams. This creates a lovely rhythm, articulates the masses, and breaks the expanse of roof when viewed from the entry road above.” 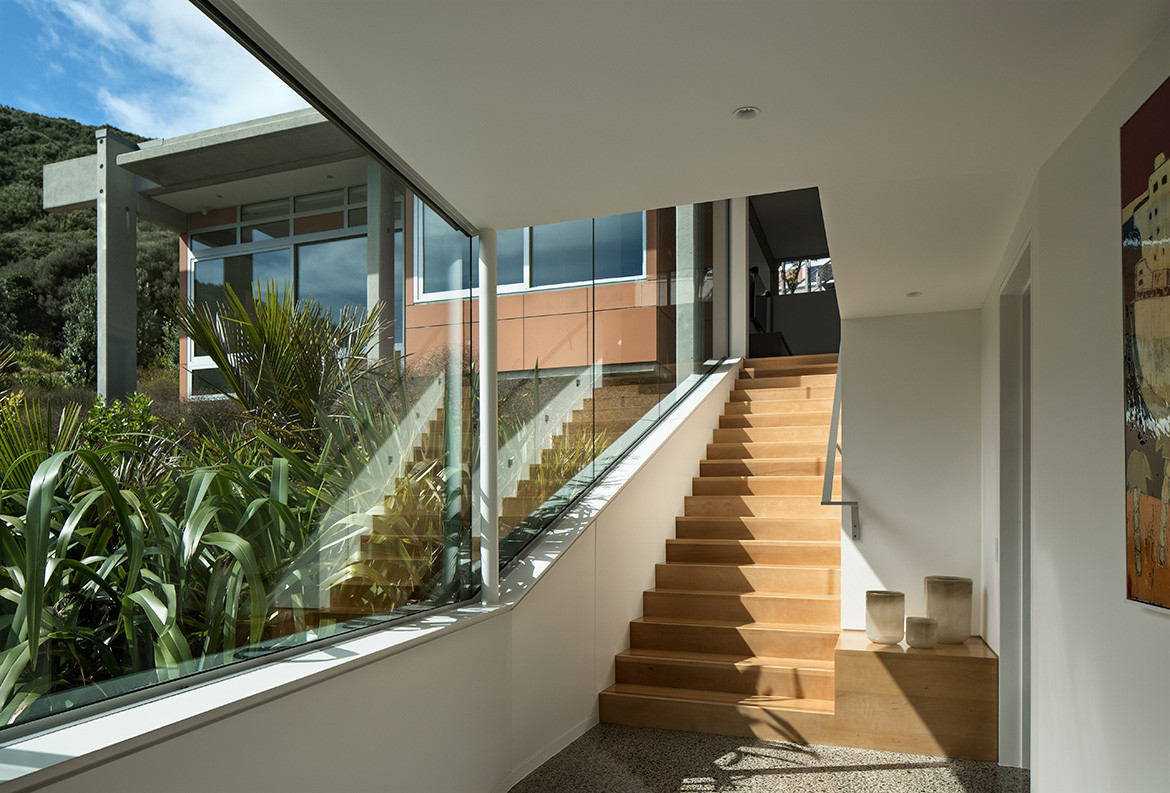 Viewed from a boat, the Parekura Bay house appears as a series of terraces and colonnades. The cladding system of aluminium, glass, and an ochre-coloured Eterpan are recessed and disguised by shadow. Interlocking columns and beams read independently of the walls and make the buildings themselves feel separate and light. The seeming independence of structure to wall is reminiscent of the modernism and rationality of the Case Study Houses, with this spirit continuing inside in the same panelised wall and the addition of warm plywood elements.

Parekura House is a very modern response by an architect and client who are both interested in, and understand, commercial construction techniques, and on a site that might otherwise illicit an historic or sculptural landscape response. By contrast, they have chosen an abstract, tectonic language to frame three generous living terraces for a family who are thrilled that their presence sponsors the extensive forest regeneration at Omarino. 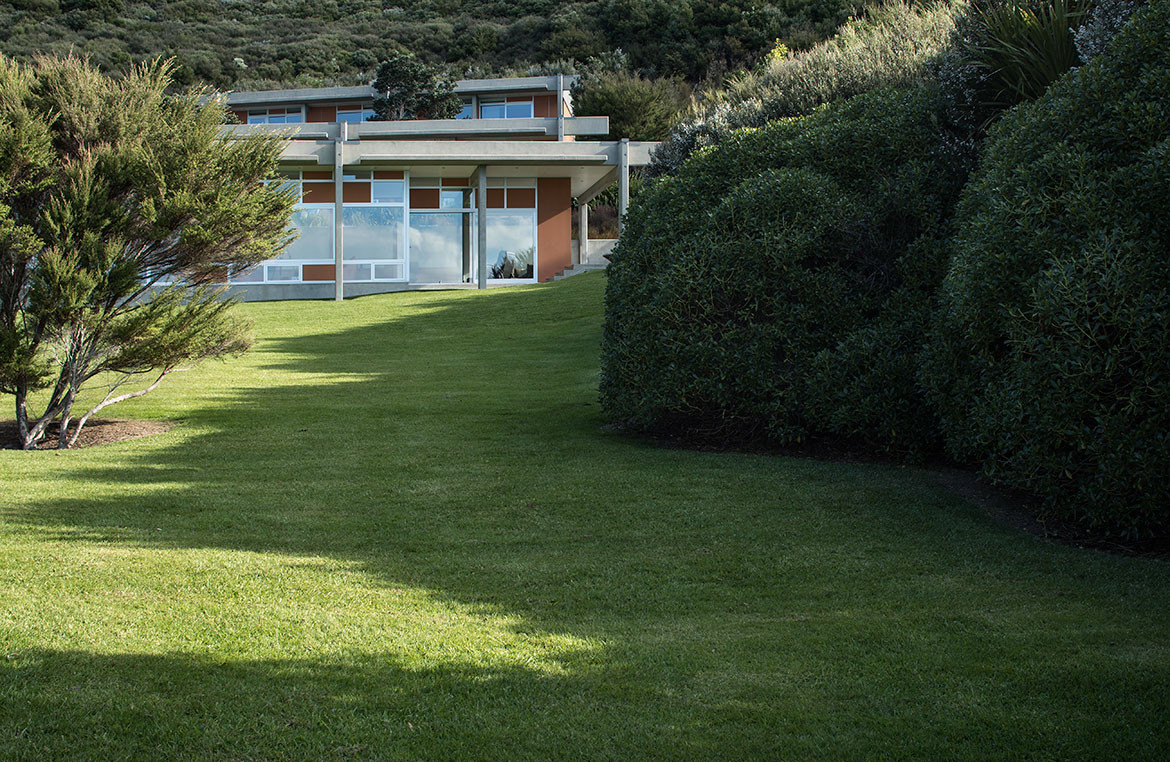 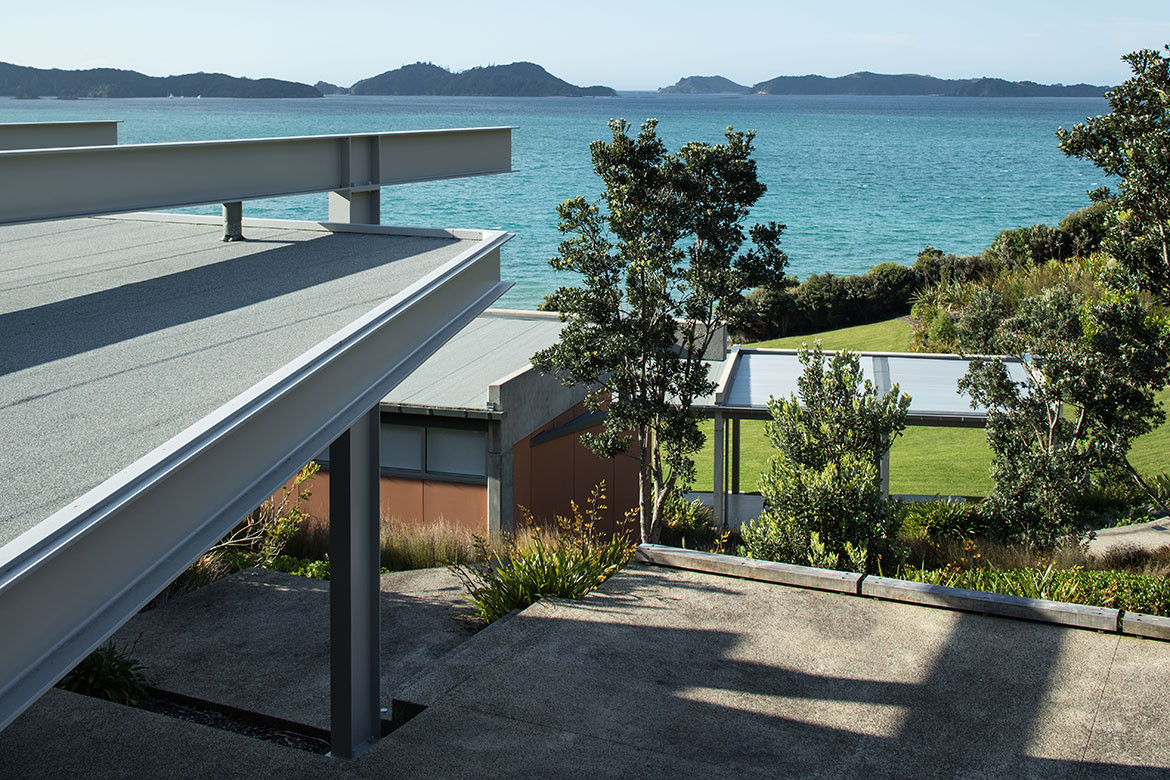 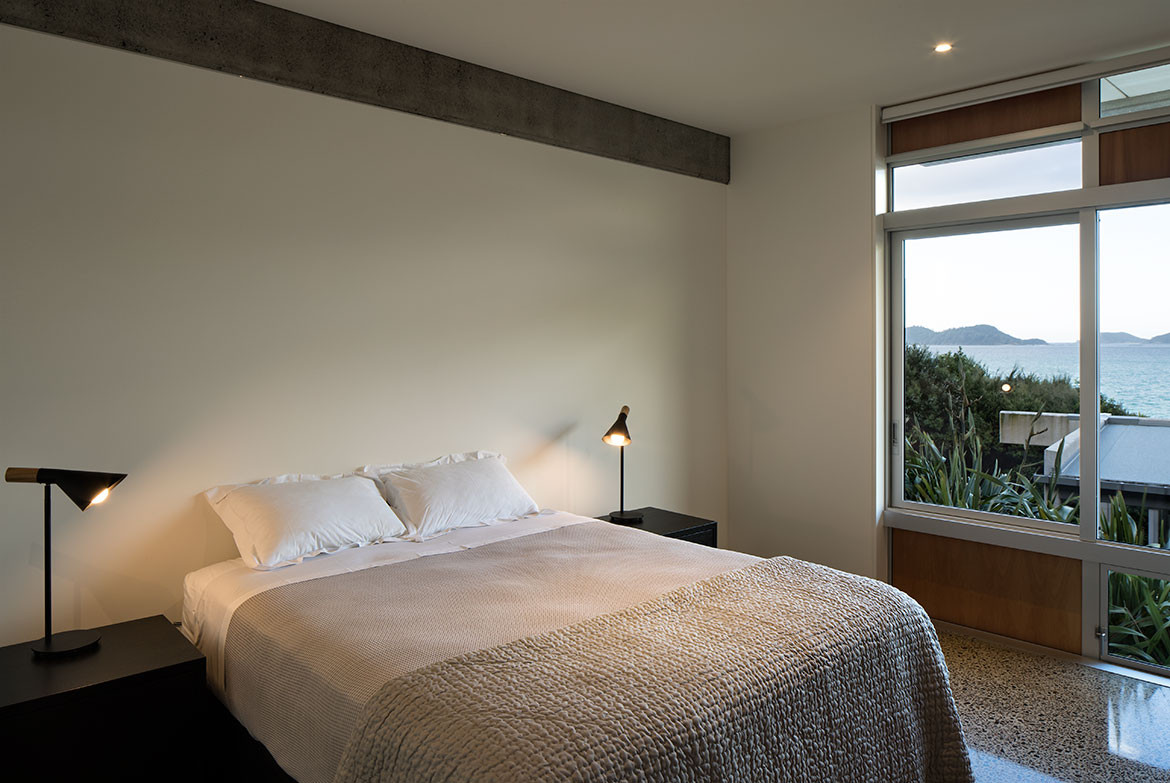 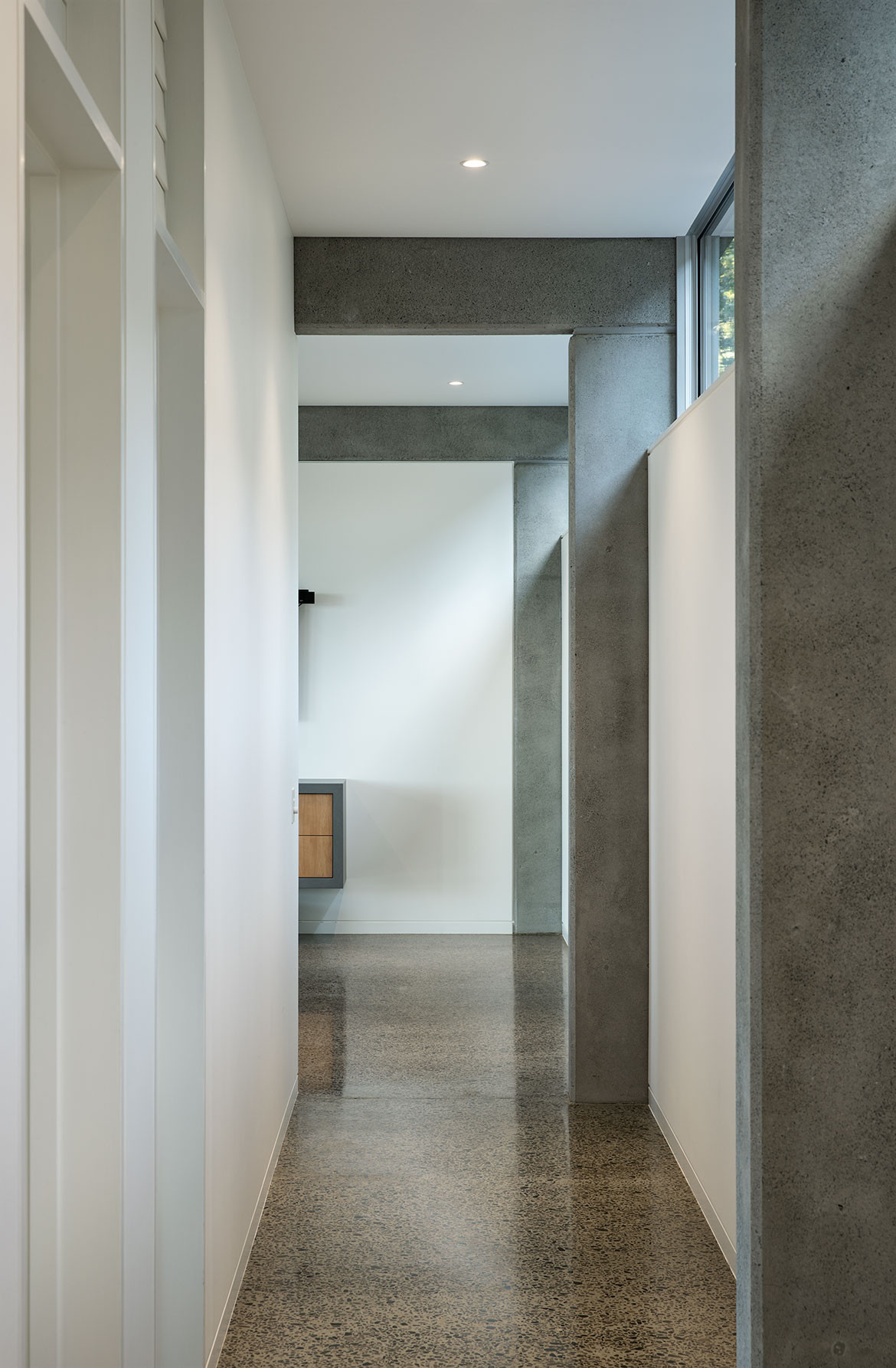 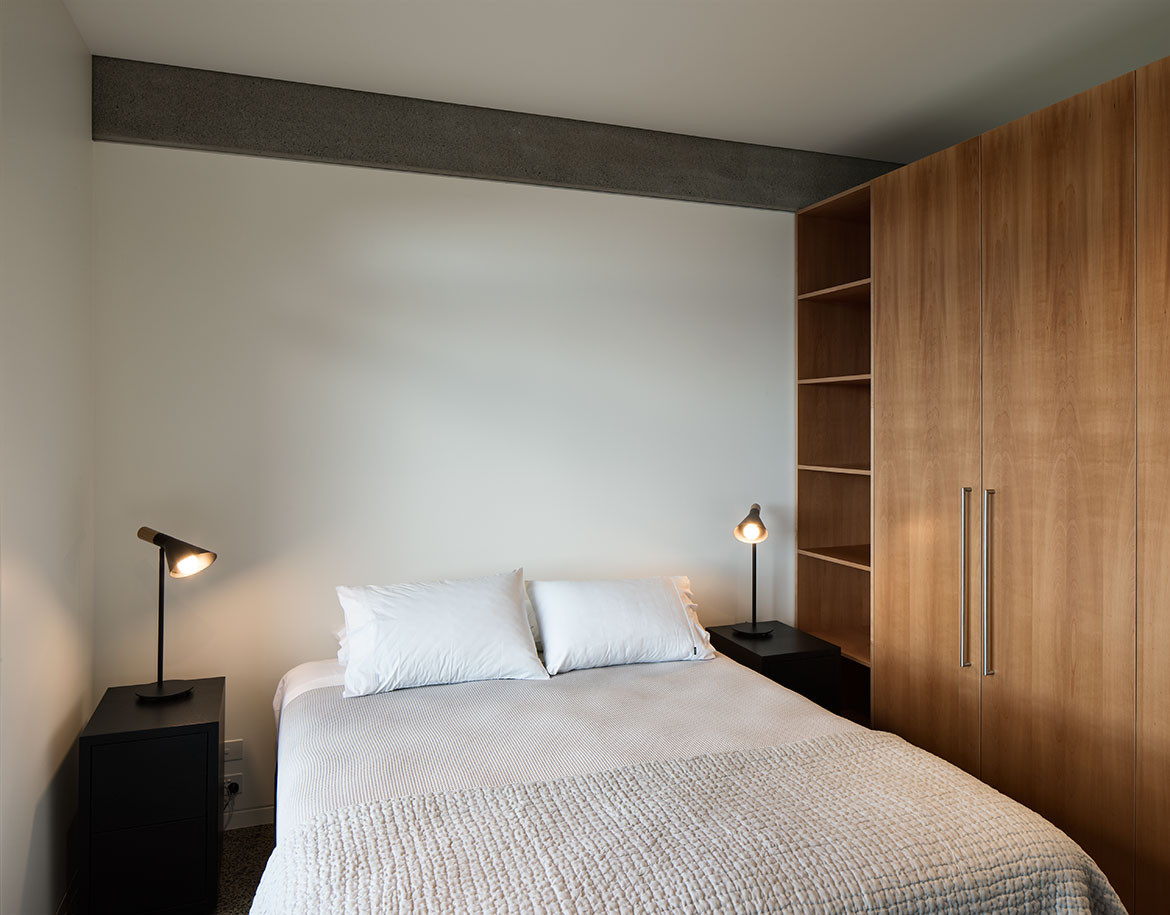 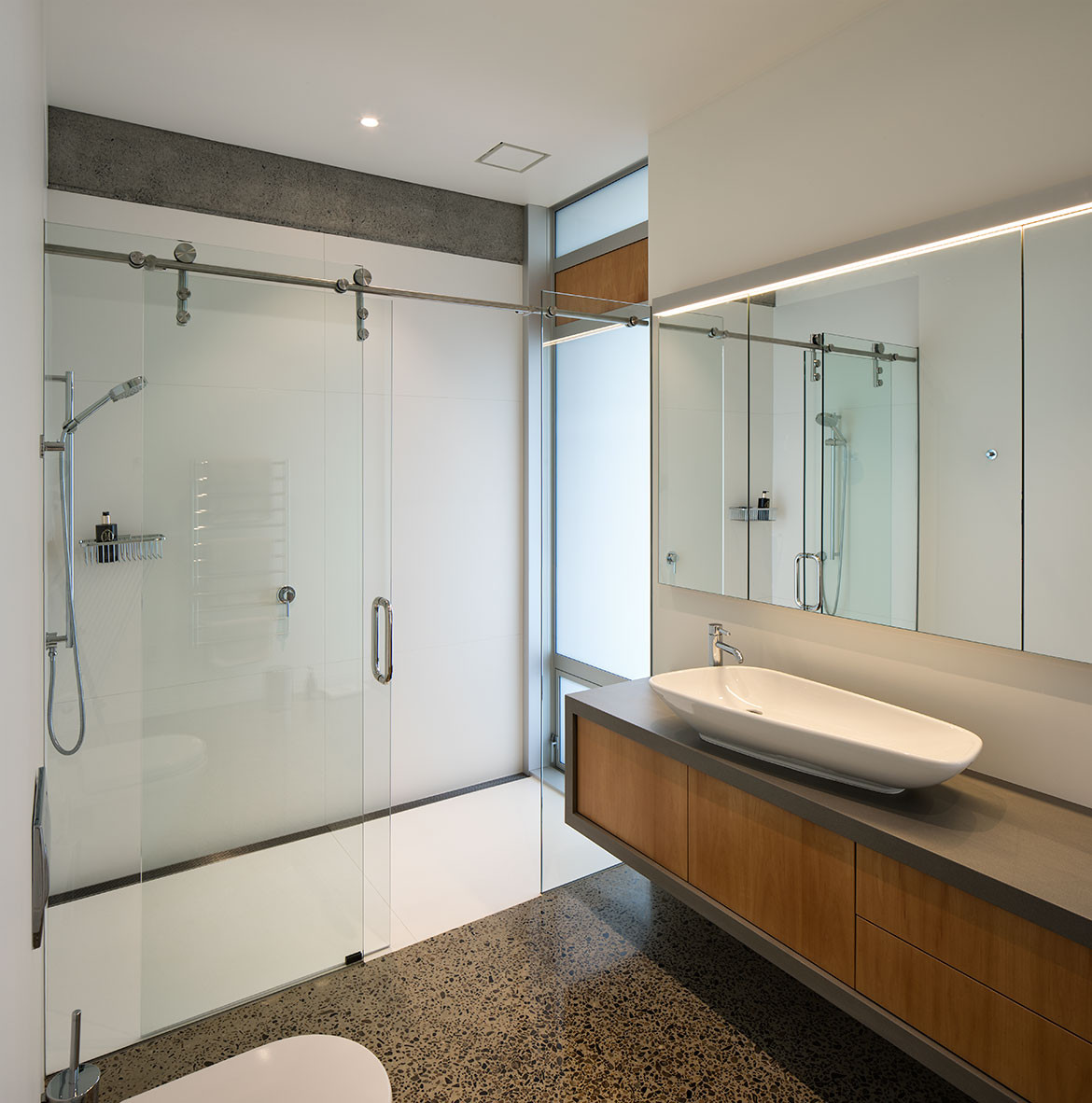 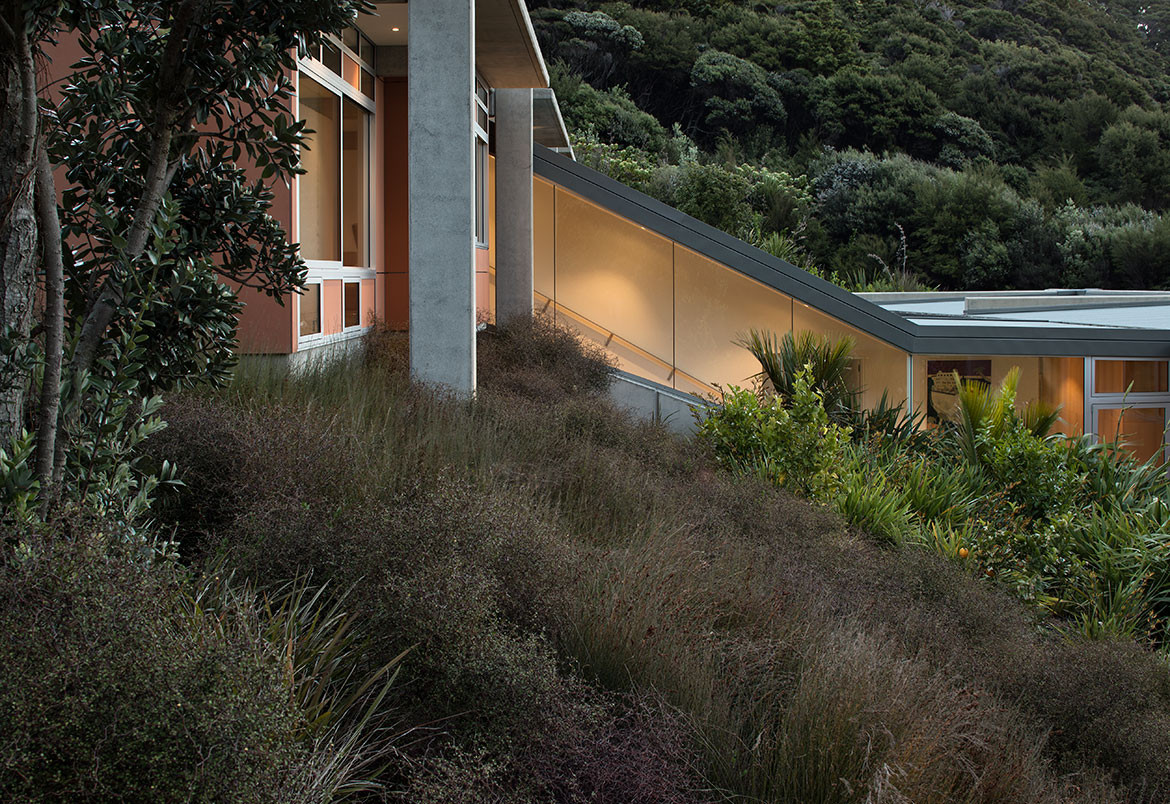 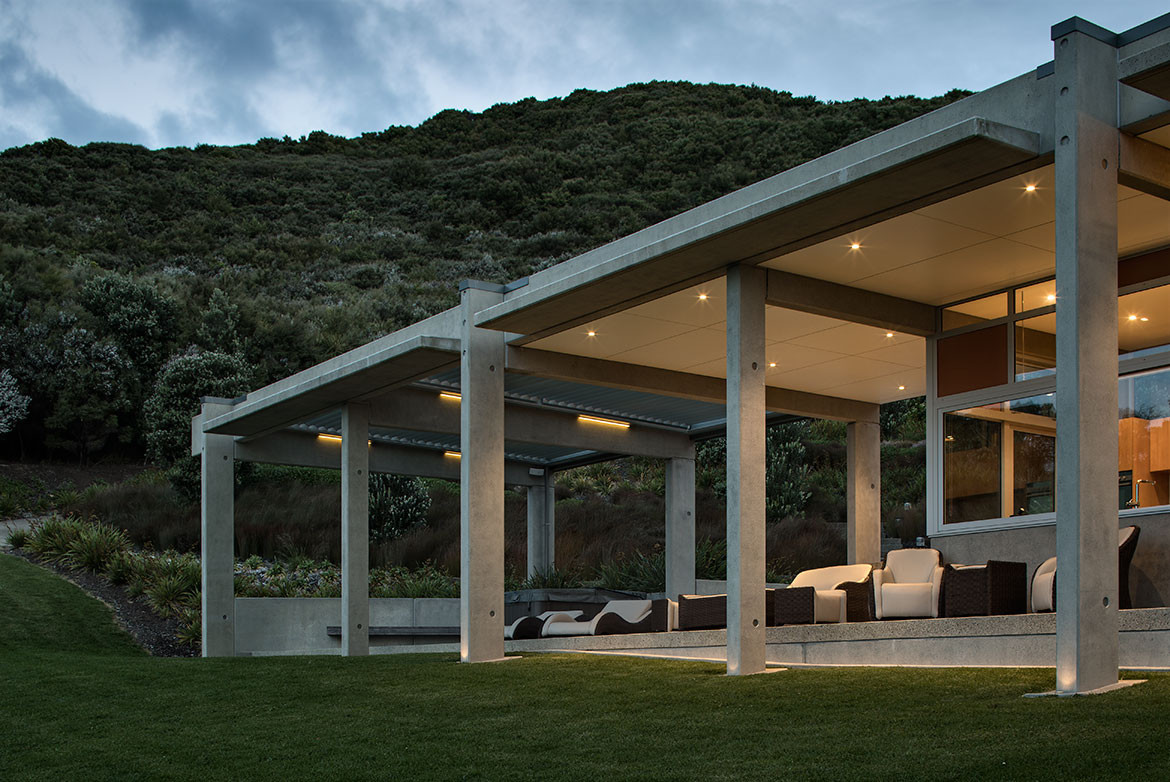 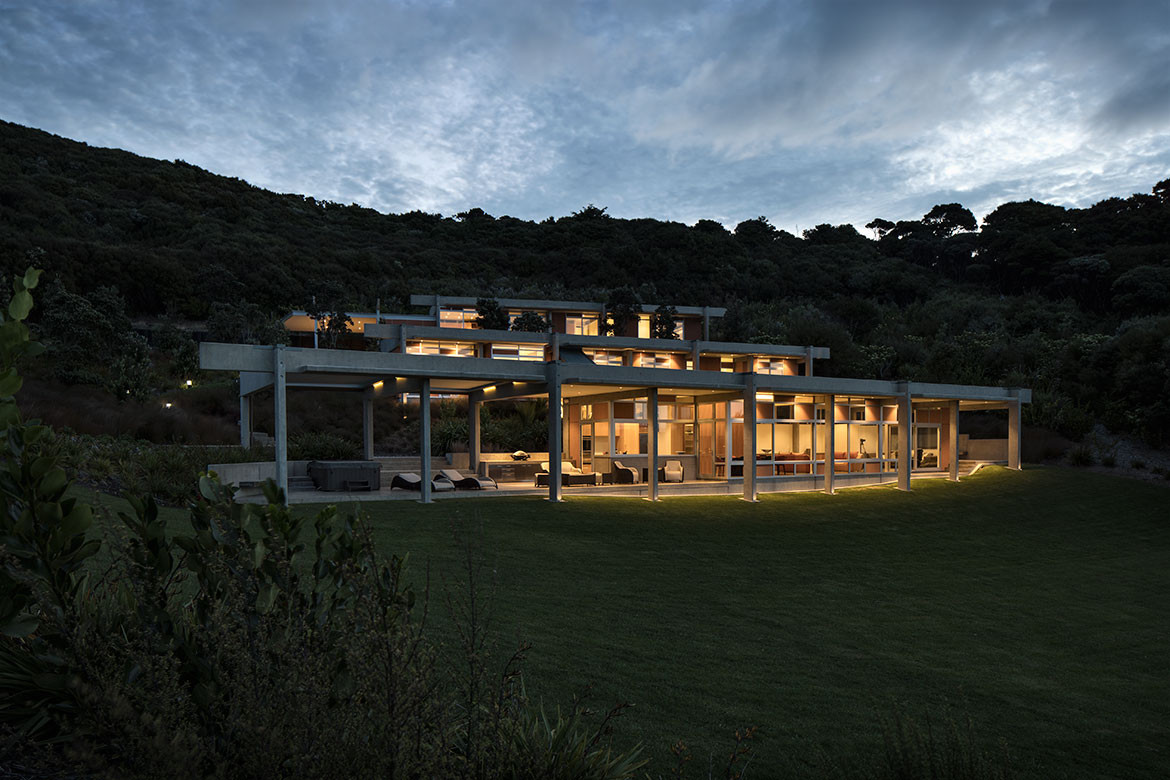 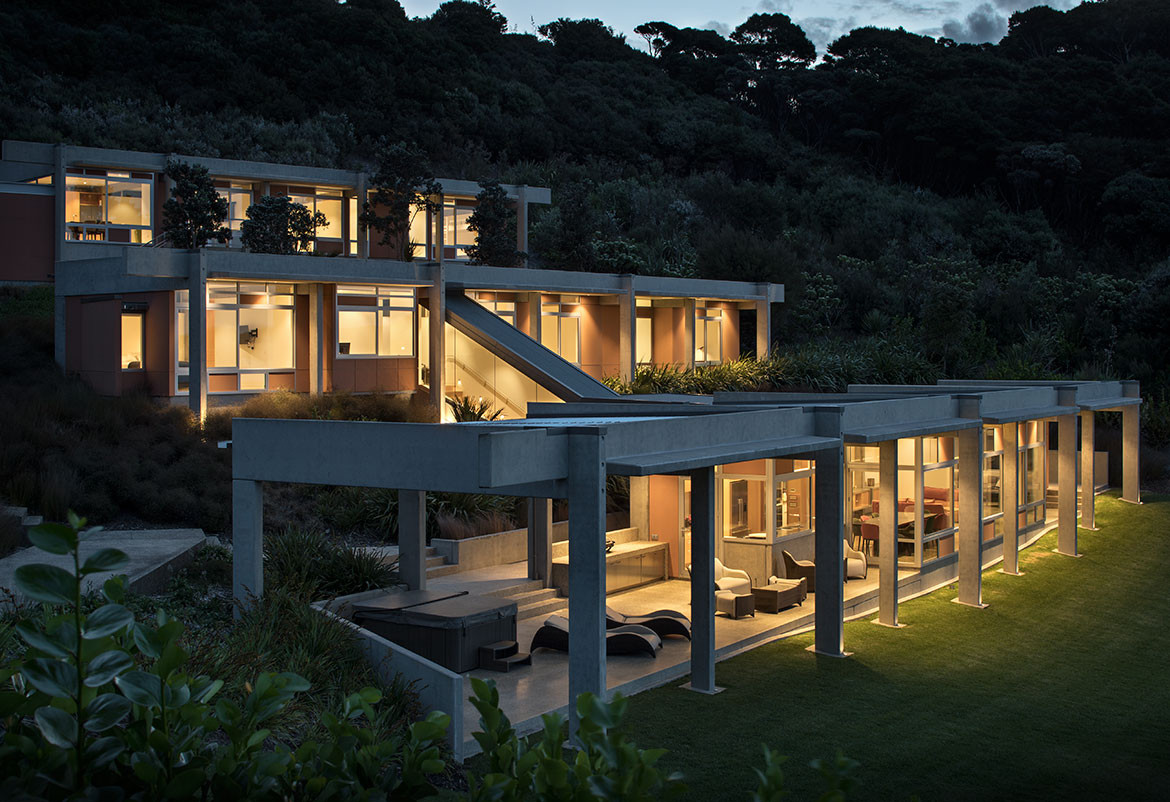 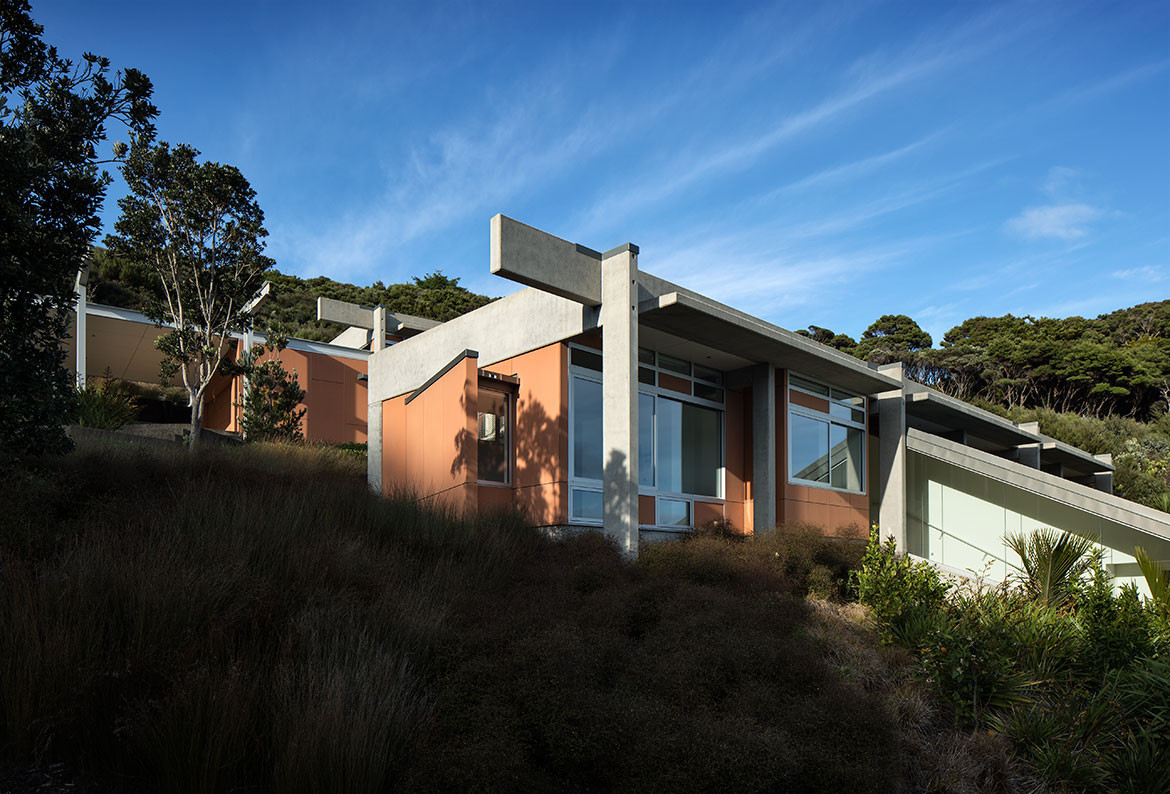 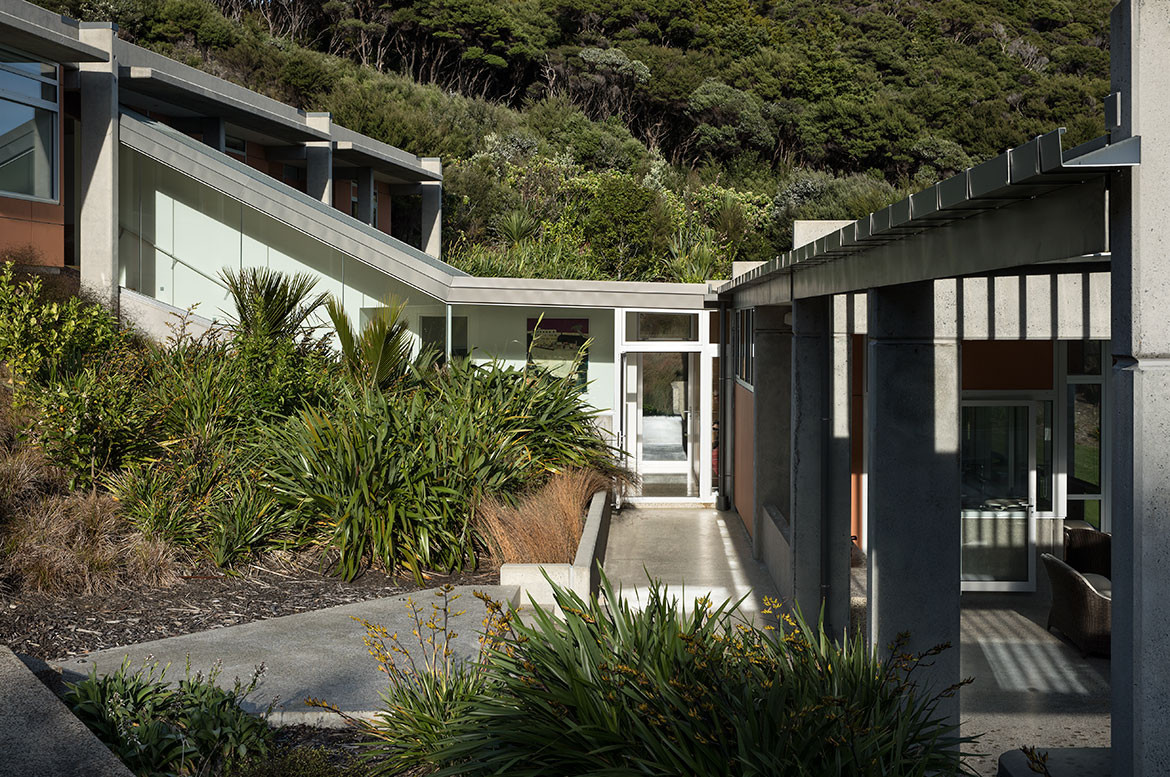 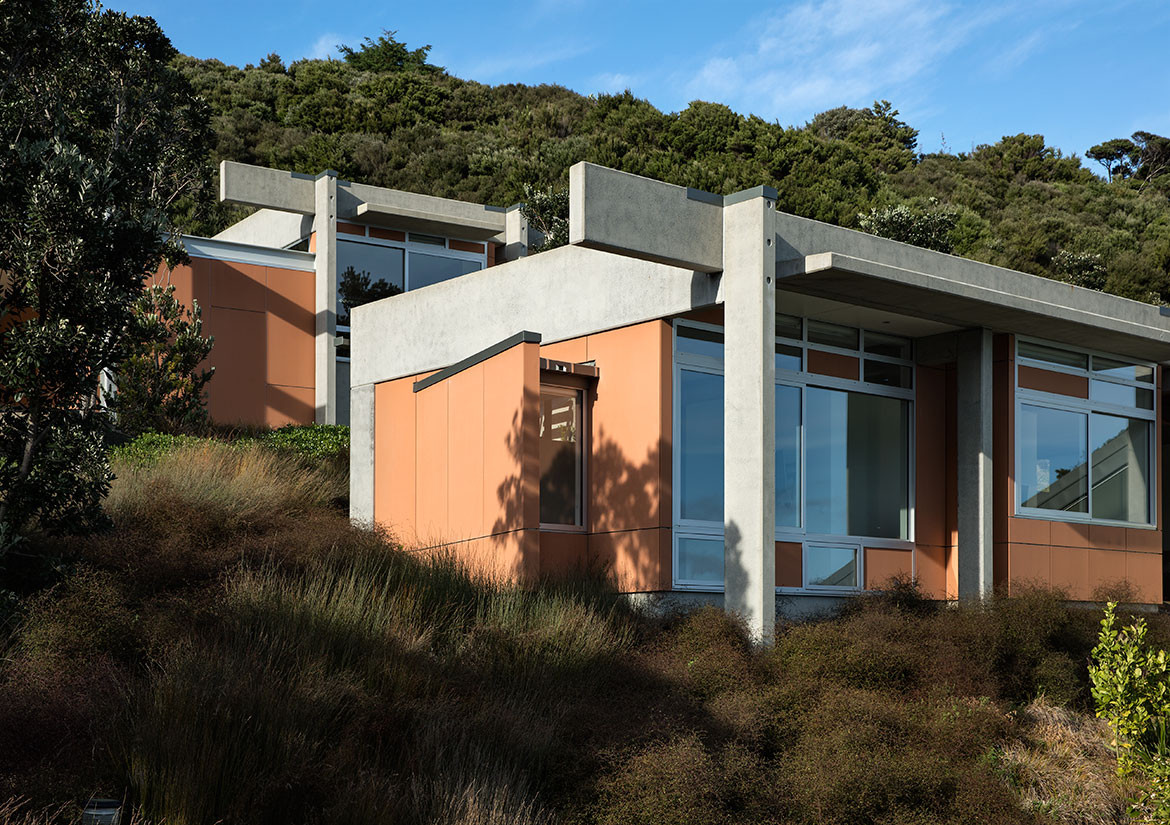 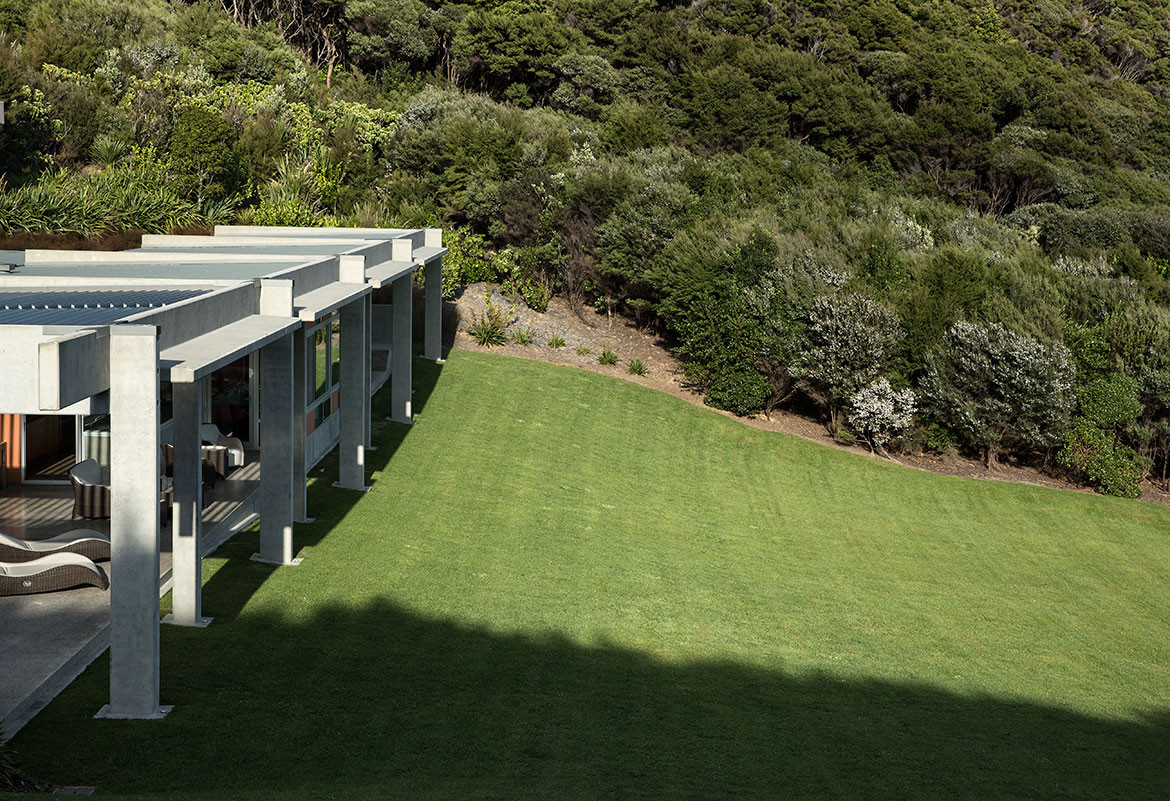 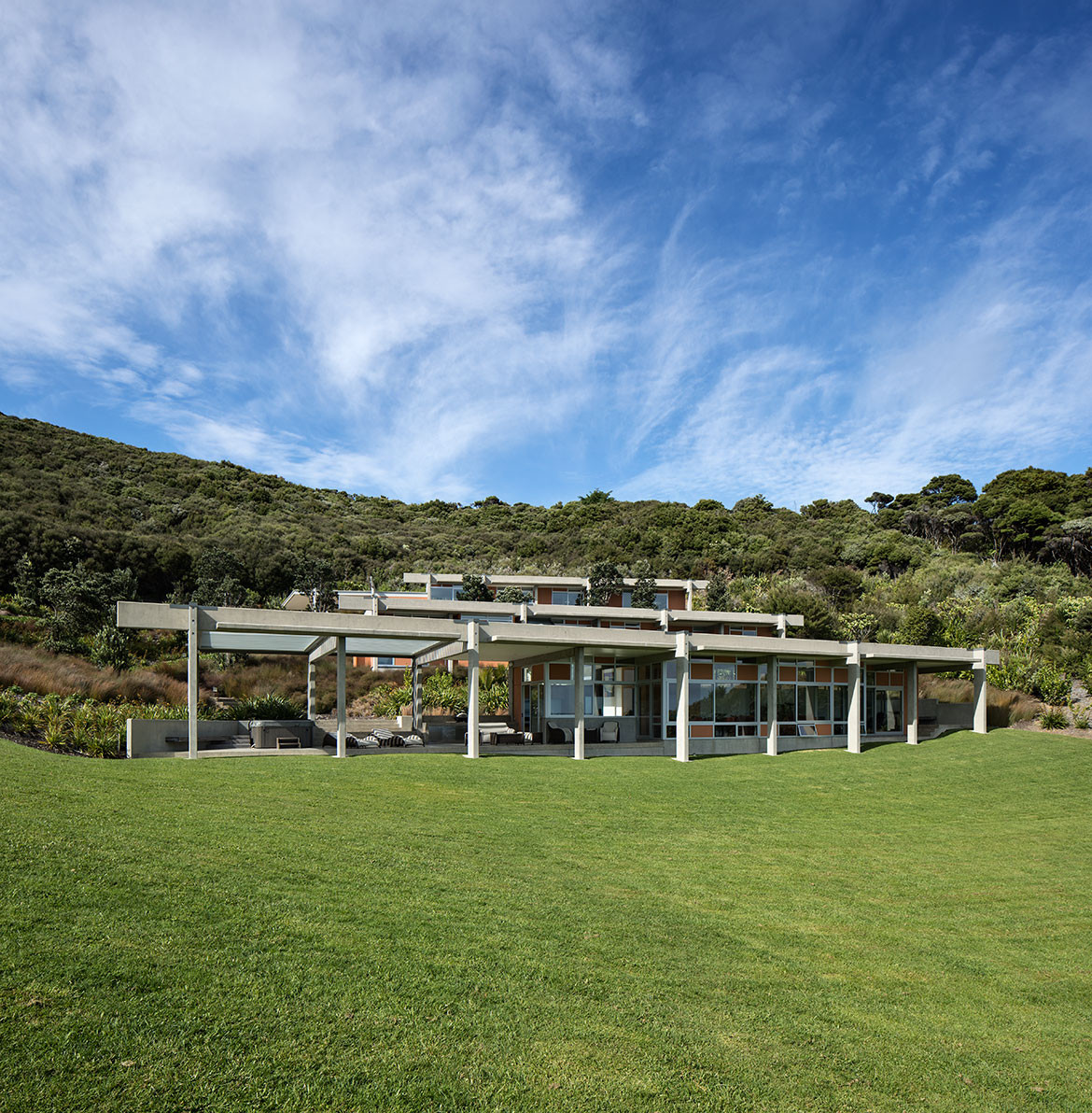 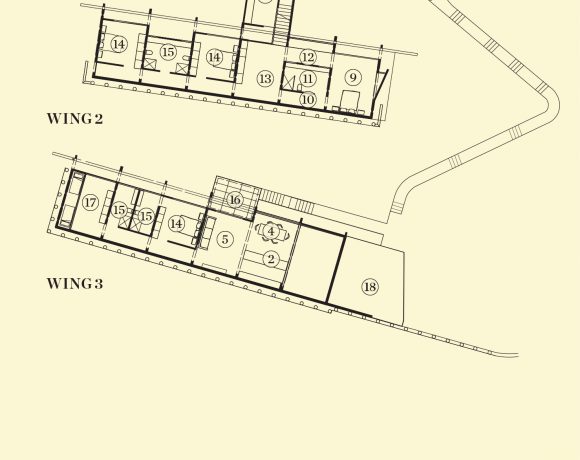