Out of This World Interiors Fr.. 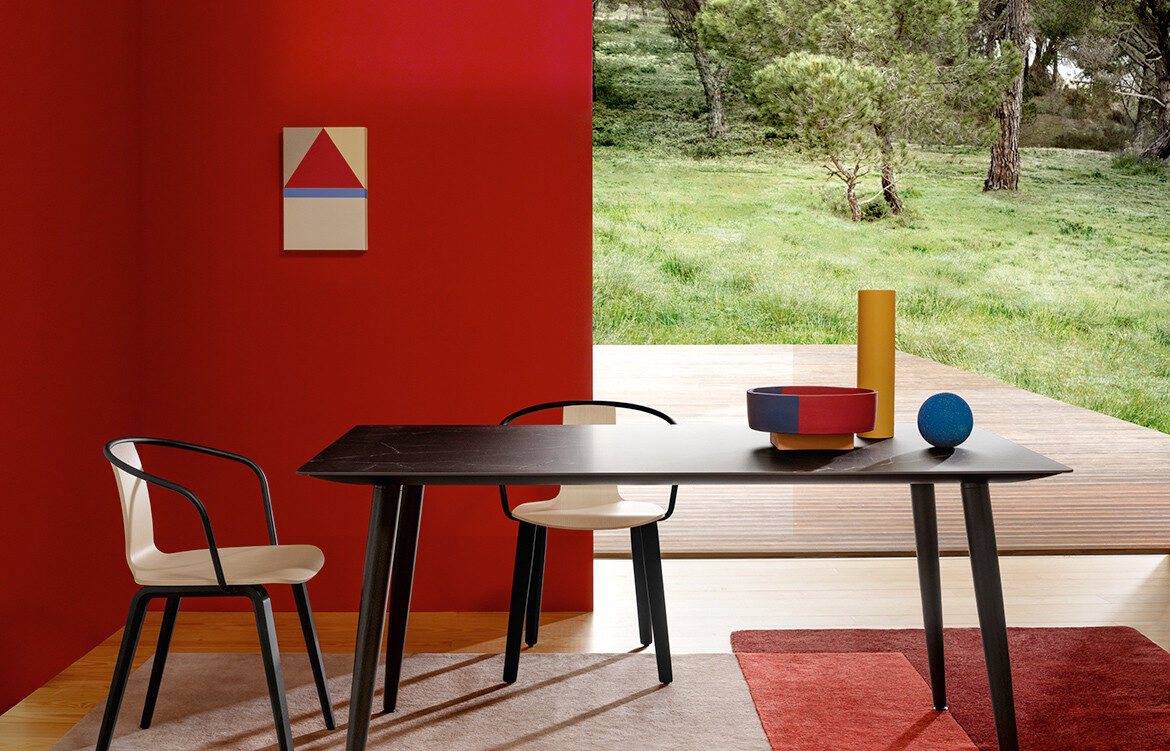 #Pedralitales at Casa 3000 will transcend you to another realm through a soulful story of creativity, design and artistry in the purest form.

Creativity knows no boundaries. Artists and design-thinkers have an inimitable power to tell a story through a myriad of artistic mediums; each one unique to their own specialised craft. Italian furniture brand, Pedrali aims to convey the elegance and inspiring soul of the historic brand and its lifestyle in their new campaign, #Pedralitales in Casa 3000.

The story of Casa 3000 is one that is reminiscent of a long-lost fairy tale. Unfolding in a breathtaking location, a striking form soars in solitude within a wild landscape of cork oaks and umbrella pines in the Portuguese region of Alentejo. Designed by Rebelo de Andrade, the house is brought to life with Pedrali’s new indoor and outdoor collection – captured by Italian photographer, Andrea Garuti in collaboration with Studio FM and Studio Slaris.

#Pedralitales showcases the products eloquently expressing their interaction with the local surroundings at Casa 3000. The archetypical shape of the house is characterised by rectilinear lines and a bold red colour, creating an ethereal atmosphere that’s both dramatic and romantic amidst the woods. Telling the collection’s story in eight scenes, #Pedralitales showcases a combination of settings for indoor-outdoor living; one that embodies the warm feeling of coming home with a leafy, ethereal backdrop of the natural surroundings.

The first shot greets the visitor with Soul Outdoor; a delicate armchair designed by Eugeni Quitlett that expresses pure and genuine creativity. The aluminium tubular frame is organic in form – curved with classical shapes and a solid proportion of a slatted ergonomic seat to maximise comfort in a minimal chair. Standing in between the chairs, the Concrete table by Pio and Tito Toso – playful and sleek with its concrete base and steel column, completing the scene with a simple form.

The Tribeca collection by CMP Design is seen in the next chapter of the story. Sitting delicately on the patio, this true icon is a modern reinterpretation of a classic 60s design – revitalised in a new material story of a steel frame, combined with the elasticity of a profile in vertically-woven plastic material. Durable, dynamic and inviting, the chairs are handcrafted with meticulous attention to detail – putting a contemporary twist on the traditional chair. Suitable for any environment, Tribeca can flexibly move from a veranda to an open-air garden, embracing you in as you watch the sunset.

To complete the shot, the Giravolta wireless outdoor lamp by Basaglia Rota Nodari stands tall – accompanied by the sophisticated character of the Reva lounge setting for a relaxing atmosphere. The four tapered legs support a thin aluminium frame, allowing for a generous seating area. The Buddy table is the perfect companion – unobtrusive and charming with a versatile and welcoming shape to complete the scene.

Inside Casa 3000, a new chapter unfolds with a warm, homogenous interior to match the vibrancy of the outdoor shell. Eclectic and undeniably enticing, large windows frame the landscape – allowing natural light to flow seamlessly throughout the home. The Jamaica armchair by CMP Design boasts a tubular steel backrest softened by the warmth of the ash plywood seating and backrest as a nod to the traditions of modernism. The Babila table takes pride of place in the centre of the photograph with its distinctive charm to complement the Jamaica chairs.

Eugeni Quitllet continues his story into the indoors with Remind – a soft armchair with sinuous curves reminiscent of late Nineteenth century designs. Crafted from polypropylene, a breathable seat and backrest highlights Quitllet’s exceptional attention to intricate and functional details in ensuring total comfort and superior versatility. The Fluxo table by Luca Casini is a rounded-edge table that seeks to bring a sense of lightness to any space, while also being the perfect pairing for any chair.

Set against the red backdrop sits the Folk chair by CMP Design – one of the campaign’s hallmark elements of fusing the extraordinary energy of the colour red with the comforting warmth of wood and its timeless quality. Folk is more than just your traditional chair – Folk accentuates the concept of simplicity with all of its parts seamlessly blending into one compact chair.

In the last scene of the story, the elegant and cosy chair, Vic makes its debut. Created by the French designer, Patrick Norguet, Vic reimagines the concept of a chair with a movable backrest which lifts from the seat while remaining tied only at the ends. As a result, the opening provides Vic with a design lightness that is outstandingly distinctive. Sitting gracefully next to Vic is the Inox table, which celebrates its 20th anniversary this year. Above, the Tamara suspension lamp by Basaglia Rota Nodari completes the story with its inimitable style and elegance.

#Pedralitales at Casa 3000 transcends the visitor to another realm through a beautiful story that celebrates creativity, design and artistry in its purest form. A notable feat of Italian contemporary design, Pedrali’s new collection continues to reshape the way we experience our everyday spaces.

The Mood At Maison et Objet And Imm Cologne 2020